While their time as a friendly species didn’t begin until in Ocarina of Time, the Zora have always been a part of The Legend of Zelda. If you’ve played a Zelda game, you’re definitely familiar with this water-faring race, but their appearance and cordiality have changed over the years. 2D games were most apt at casting them as fish-monsters hell-bent on depleting your hearts, but the move to 3D gaming really seems to have brought a change in theirs.

We’ve been adventuring either in spite of or alongside the Zora since the '80s, and we’re glad to see they’ve become much kinder over time. Their current niceties, though, don't change the fact that it’s been quite the journey for them to this point, so we wanted to look back and see how the Zora have evolved and changed throughout The Legend of Zelda series.

The Legend Of Zelda 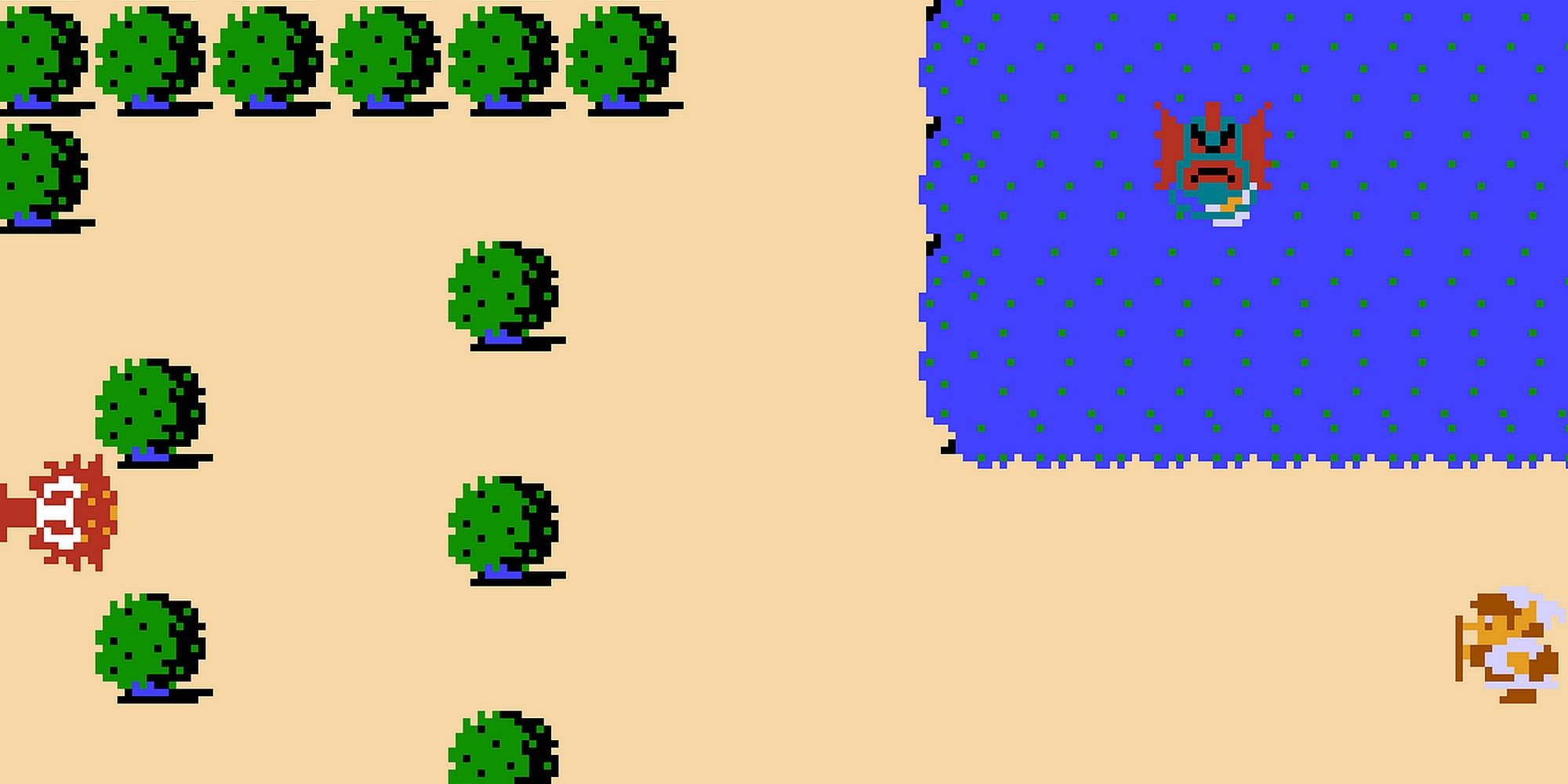 The first time we set off on an adventure as the soon-to-be Hero of Hyrule, the Zora were thorns in our sides. They’re introduced as enemies whose attacks will steal half a heart each time it hits and can only be negated if Link is carrying a Magical Shield. It's available for purchase around Hyrule and is critical to your survival, as the Wooden Shield won’t work.

Checking the guidebook for the game, you’ll see them referred to as Zola, and a mistranslation from the original Japanese gives the impression that all hostile Zora are female. In this game, they’re bluish-green with red, monster-like fins on either side of their face, and they have two visible fangs in the guide’s artwork. You could find them mostly in any body of water around Death Mountain.

The Adventure Of Link 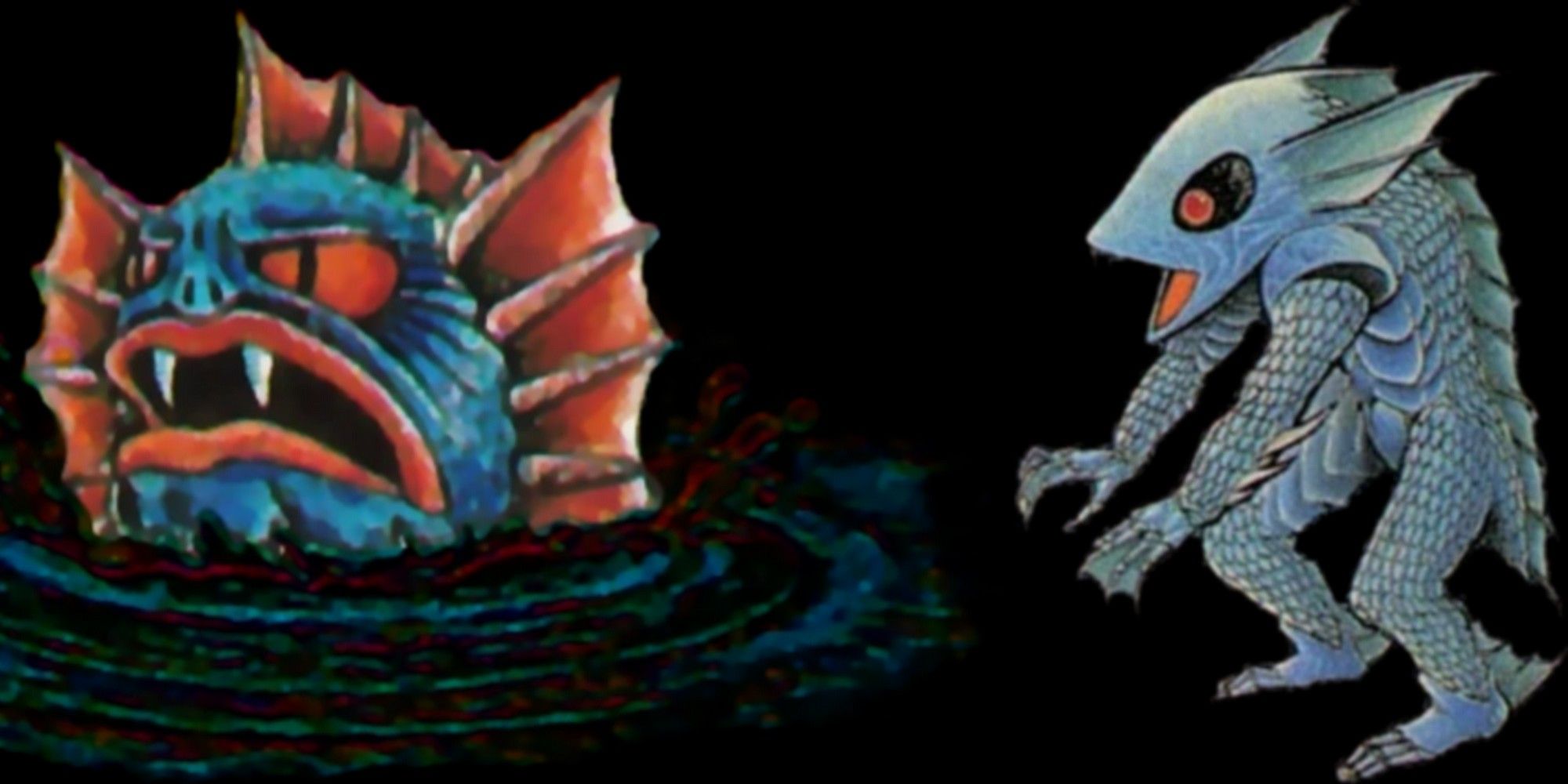 While the Zora do remain a partially aquatic race in Zelda's 1987 follow-up, The Adventure of Link, they’re no longer confined to the water. Their physical appearance is relatively similar, and although they’re land-faring creatures now as well, their attacks function similarly. They can stand on two feet to spit ranged projectiles or get down on all fours and duck to mimic how they acted in the water.

And in this game, they’re known for being tough. A single hit can deplete up to three-quarters of your health bar, depending on how strong you are and where in the game you’re encountering them. In Japan, regular attacks work on them, but in the Western releases, you’ll need to rely exclusively on fire magic.

A Link To The Past 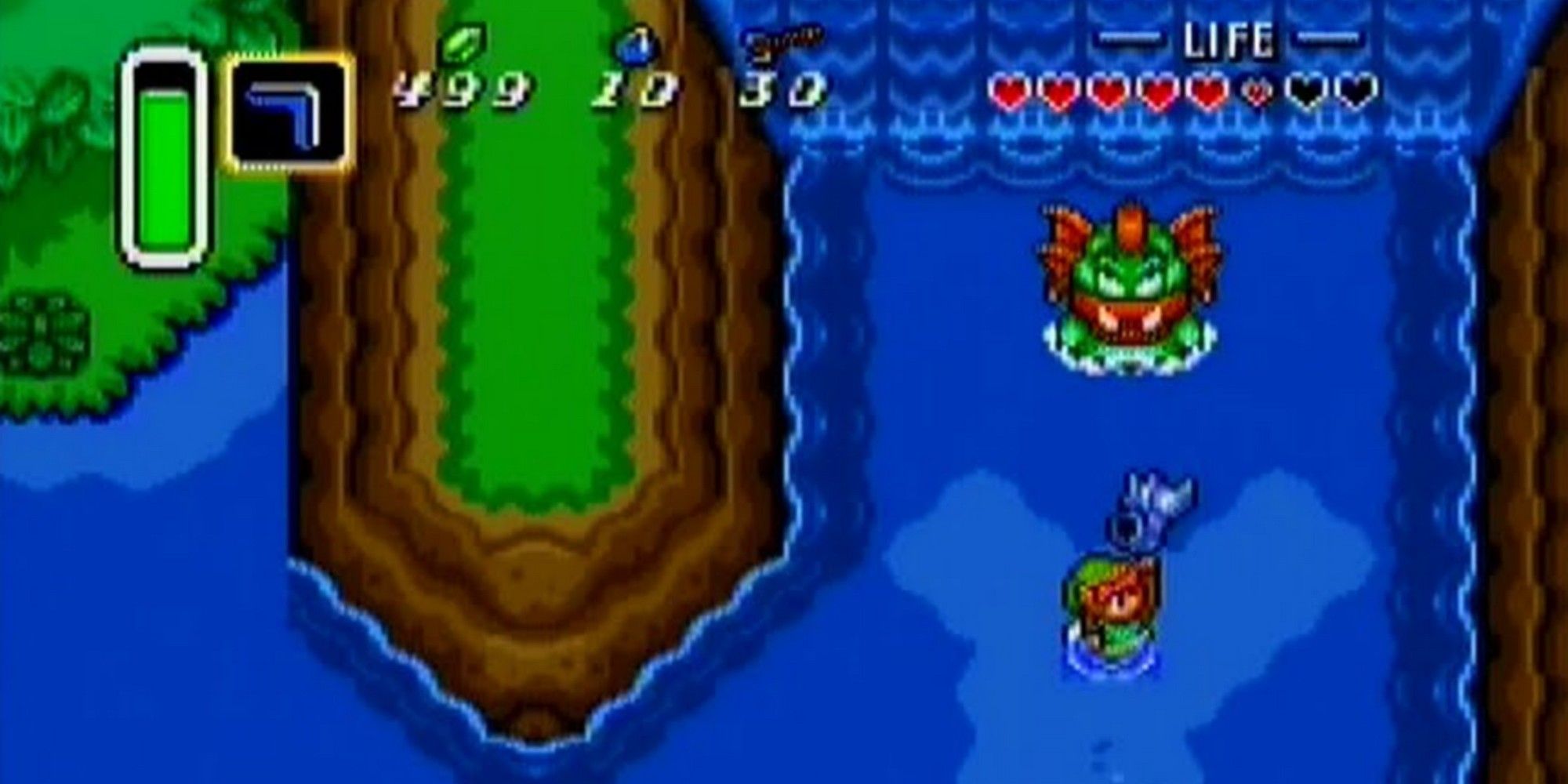 This title is complicated, as it’s one of the places where the timelines mess with the games’ real-life chronological releases. According to the timeline, A Link to the Past happens after Ocarina of Time, but when the game originally came out in 1991, the Zora being enemies was nothing new to players. You can find them in the Light World in this game, moving between Lake Hylia and Zora’s Lake. Zora’s River is in the game, but they primarily travel between using Whirlpool Waterways.

The majority of Zora are still hostile in this game, relying on ranged attacks when the water is deep enough to hide and emerging to fight you physically when it's not. Additionally, they still retain their previous appearance, with green scales now and orange lips and fins. The Zora King, however, is kind enough to sell you Zora’s Flippers and let you use their water portals, too.

When Nintendo's primary home console moved to N64 from the SNES and saw the release of the iconic Ocarina of Time in 1998, the Zora (primarily) switched from enemies to friends. Ocarina of Time was a game-changer in a lot of ways, for gaming as a whole and for the Zora specifically, so let's take a look at the race in the assorted handheld games as their attitudes change from title to title. 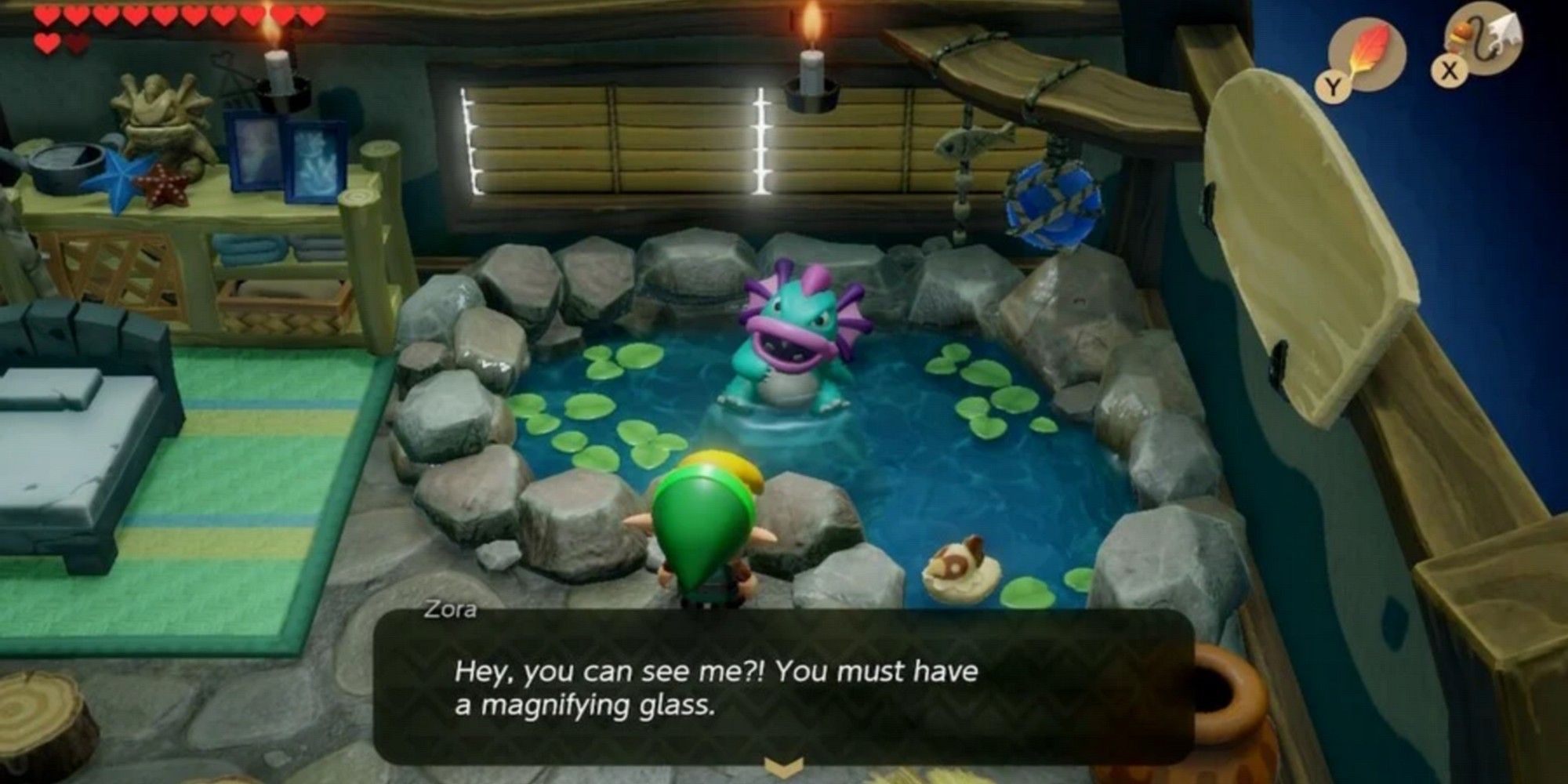 The majority of the Zora in this game continue to be hostile, poking their heads primarily from the waters of Martha’s Bay to spit their typical ranged attack at you. You can block it with the Mirror Shield, and the damage is halved if you’ve got either Blue Clothes or a Guardian Acorn on you.

Additionally, there is a friendly Zora on land in Animal Village, but they don’t exactly want to be found out. You’ll need the Magnifying Lens to speak with them, and they’ll trade you information about the Goriya if you promise not to tell anyone they’re there. 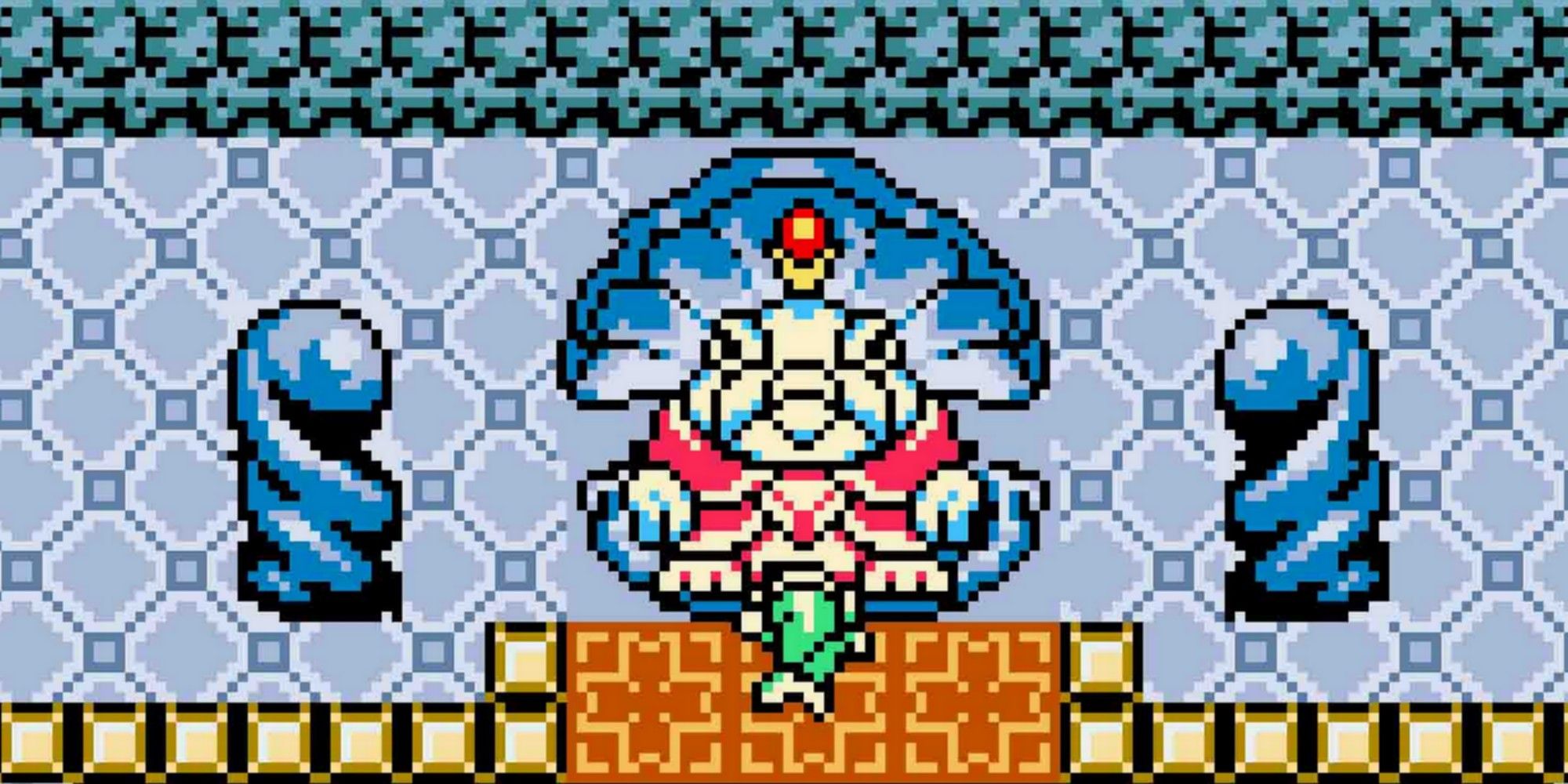 The Oracle games were interesting in that you saw a night and day difference in the Zora, depending on which title you were playing and where you encountered them. Once again, they’ll be spitting projectiles at you, which can be blocked by any shield better than the Wooden Shield, and can be deflected entirely with a Blue Holy Ring.

But those are the River Zora – Oracle of Ages also features a friendly race of Sea Zora in Labryanna, and the two races are definitely at odds. Their king has almost died due to rampant pollution, and Link is tasked with cleaning the ocean so that he can cure the king, who then survives into the present and gives you permission to enter Lord Jabu-Jabu (it makes sense in context) for the next part of your quest.

A Link Between Worlds 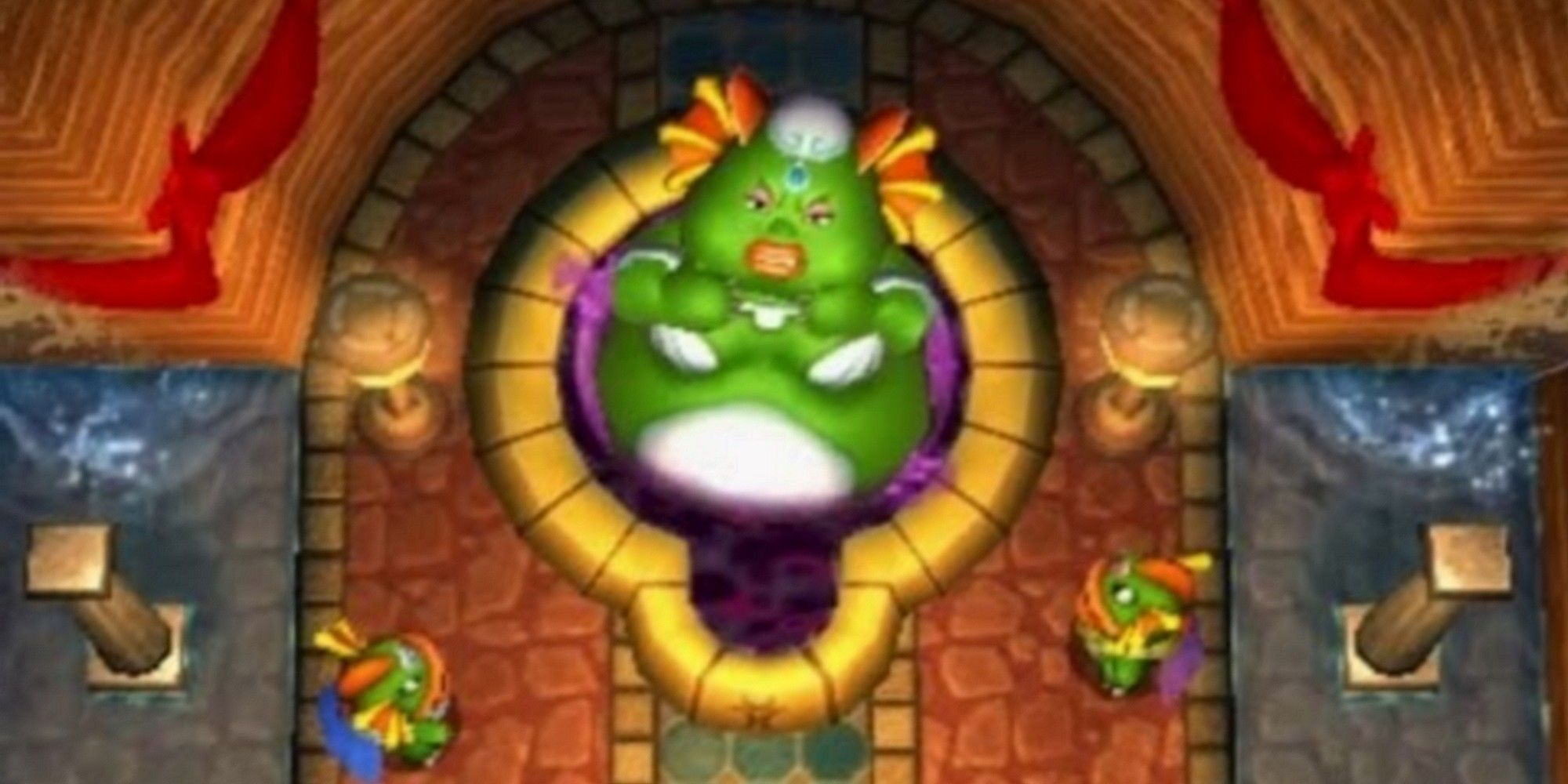 With a good chunk of A Link Between Worlds being inspired by A Link to the Past, you’ll definitely find enemy Zora in the waterways of this title, but there are kind Zora to be found in Zora’s Domain as well.

Their leader, Oren (who is one of the sages), tried to take charge, but a faction of angry Zora fell out of line and split from the group to go be hostile in the riverways. Oren continues to try her best, but the rebel Zora refuse to be tamed. 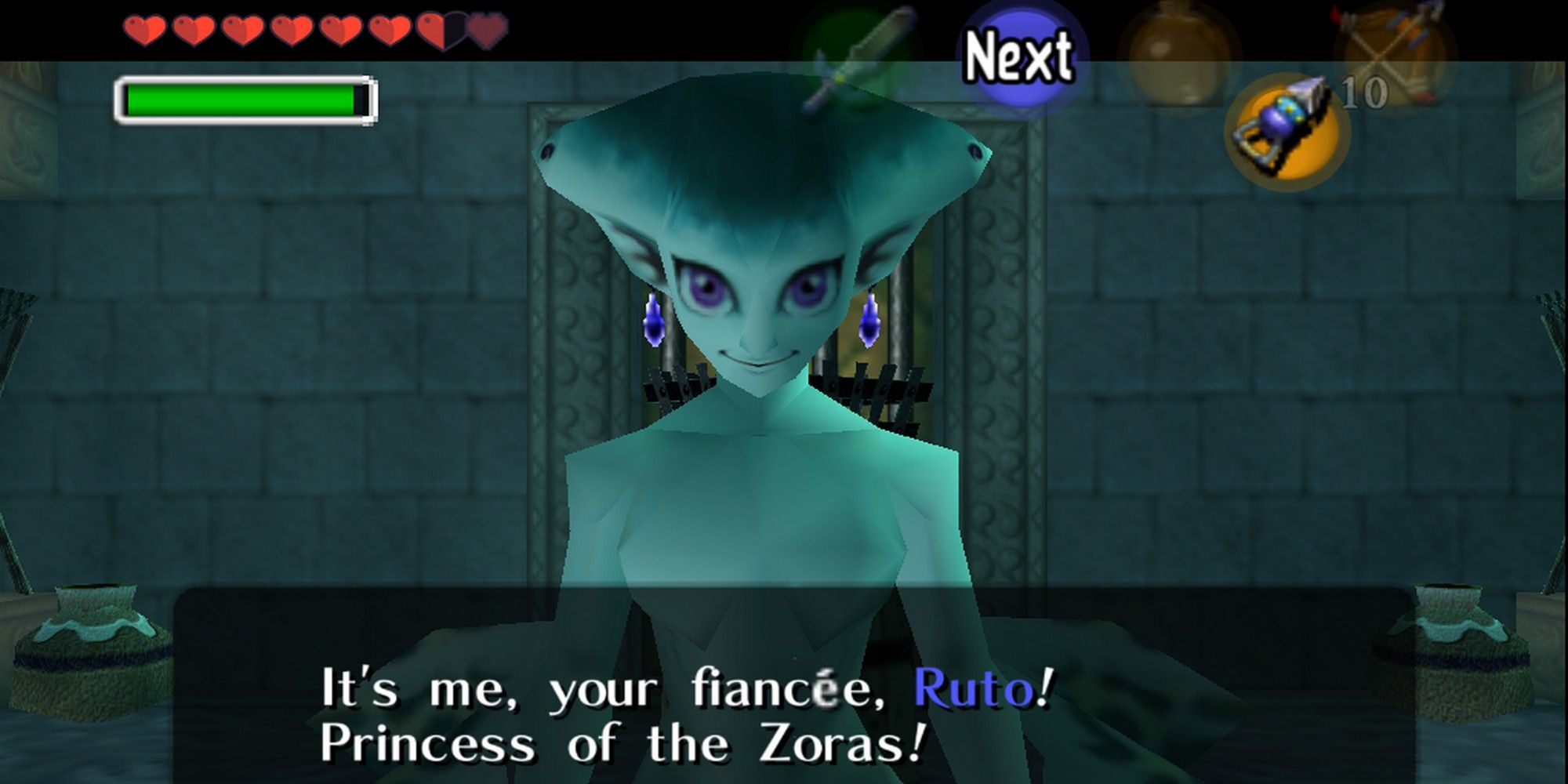 After over a decade of being enemies, the Zora have turned a new leaf, as they’re your friends and allies, beginning with Ocarina of Time. Perhaps to mark the departure from their villainous ways, friendly Zora looks radically different from enemy ones. If you encounter a Zora that looks more humanoid than monstrous, you can usually bet on them being kind.

The Zora you meet in Zora’s Domain are friendly, if not scared of how strange their guardian Jabu-Jabu is acting. Link ventures into the bowels of the fish in search of the infamously bratty Princess Ruto, daughter of King Zora, who has gone to try to quell the beast. You save her from the electrified intestines of Jabu-Jabu in exchange for the Zora Sapphire, an act she sees as a marriage proposal.

You meet Ruto again in the Water Temple during the Adult Timeline, after the majority of the Zora have been trapped in ice that's encased Zora's Domain. Link defeats Morpha, boss of the Water Temple, which clears Ganondorf's curse over the area and awakens Ruto as the Sage of Water. 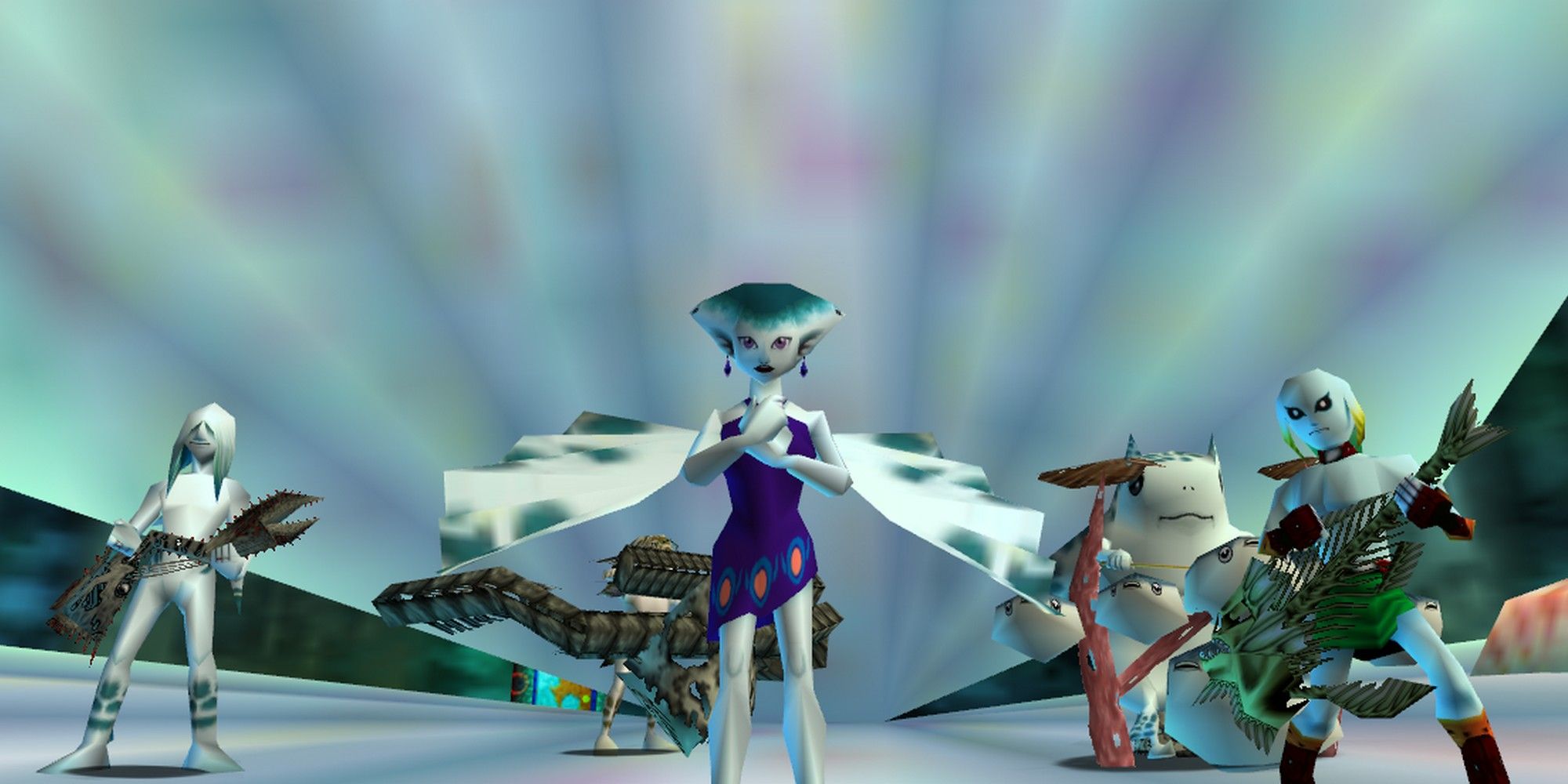 Friendly Zora can once again be encountered in Majora’s Mask, where they can be found in the Great Bay, though they seem to have lost a portion of it to Gerudo pirates. You can find most of them inside Zora Hall, where you’ll meet members of the hit music group, The Indigo-Go’s.

The pirates have stolen eggs from Lulu, the band's singer. Guitarist Mikau was mortally wounded in his effort to retrieve them, and you’re able to help him pass away. Once his soul is sealed in the Zora Mask, Link can wear it to inhabit Mikau’s body.

When the eggs are safely back with Lulu, you’re able to take on the Great Bay Temple. You’ll primarily do this wearing the Zora Mask, as it allows you to swim much more efficiently, gives fins you can use as boomerangs, and an electrified barrier. It’s implied that terrible things will happen to the Zora should they lose the temple, and Link restores peace by clearing it and defeating the boss. 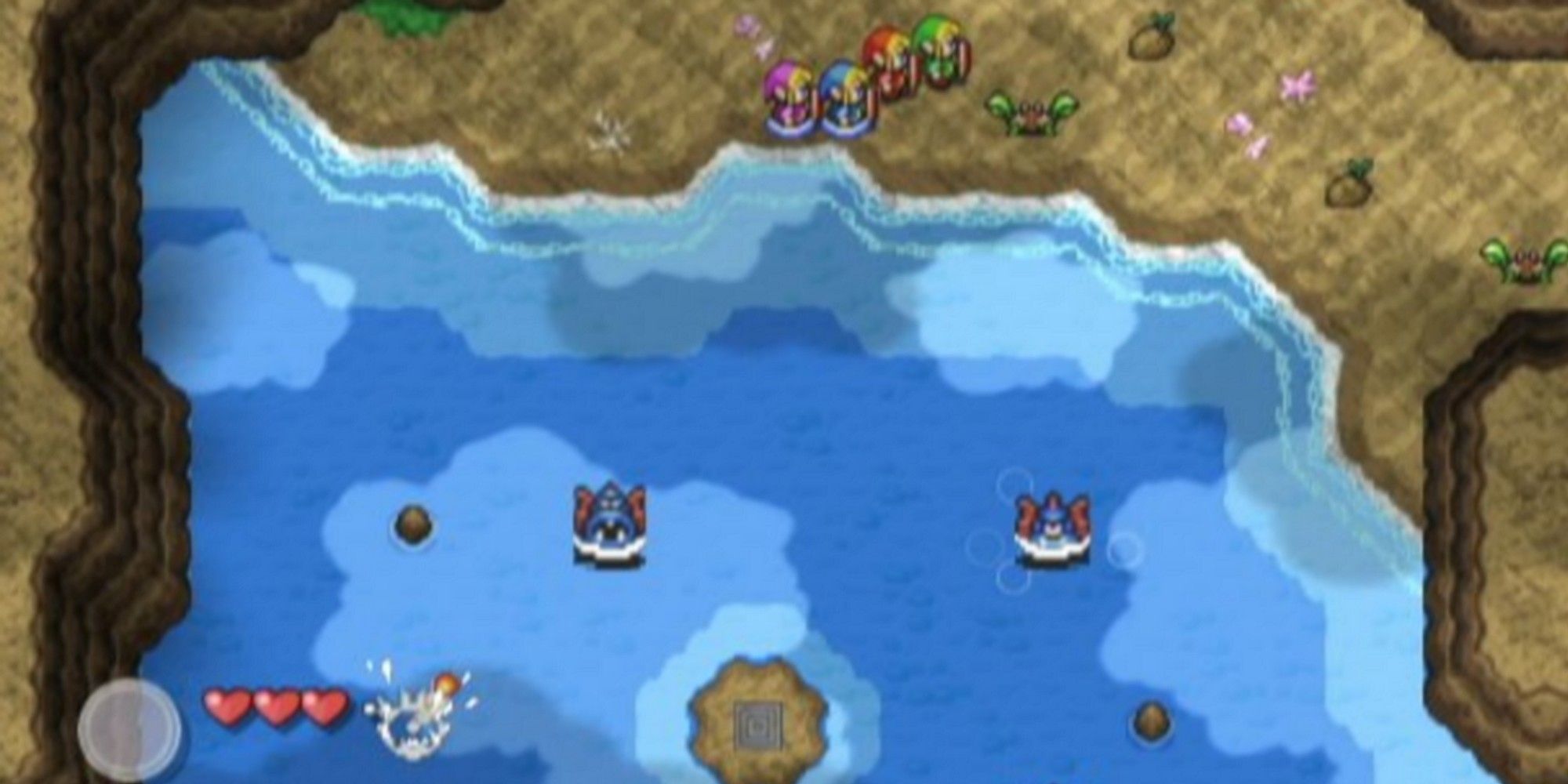 The Zora have returned, once again, to a hostile state. In this game, you can find two different kinds of Zora – blue ones that will attack you in most places where they’re encountered, as well as a singular kind Zora (well, the one who isn’t actually The Queen of the Fairies in disguise).

While the blue monstrous ones are cruel and typically ready to attack, the green one that you meet in Kakariko Village is adorable. He’s hungry, but he can’t fish very well, and helping him rewards the Links with gems and a Heart Container. 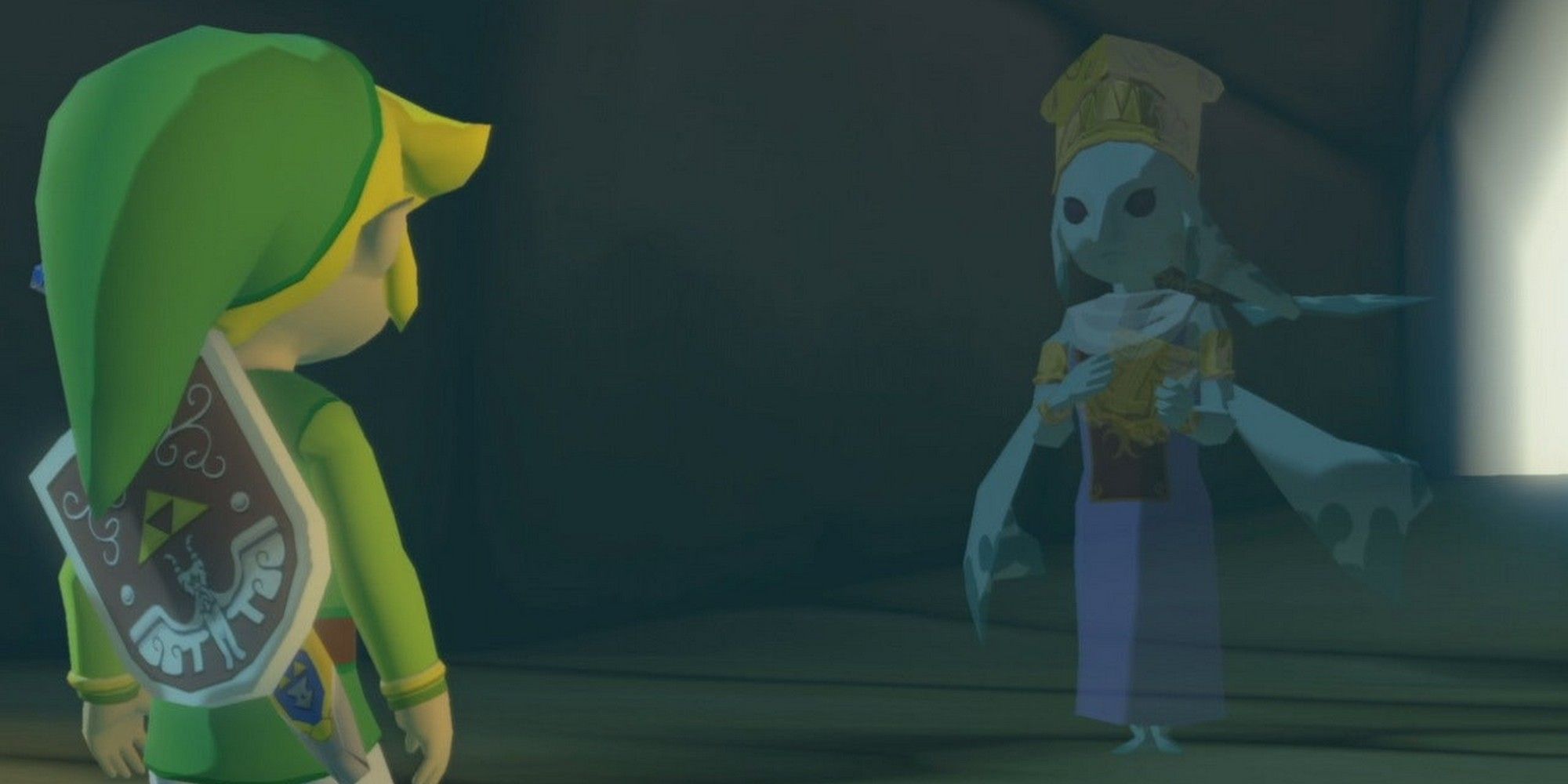 For the most part, the Zora are notably absent from The Wind Waker, as legend has it that primarily monsters could inhabit the waters of the Great Sea, not them. Because of this, the Zora underwent an evolution sometime before the events of The Wind Waker and have become the winged Rito instead.

The only actual Zora you meet is Laruto, whose spirit you’ll encounter in the Earth Temple after she’s killed by Ganondorf’s evil forces. When you speak to her, she tells you Medli is her descendant and also the next Sage of Earth. 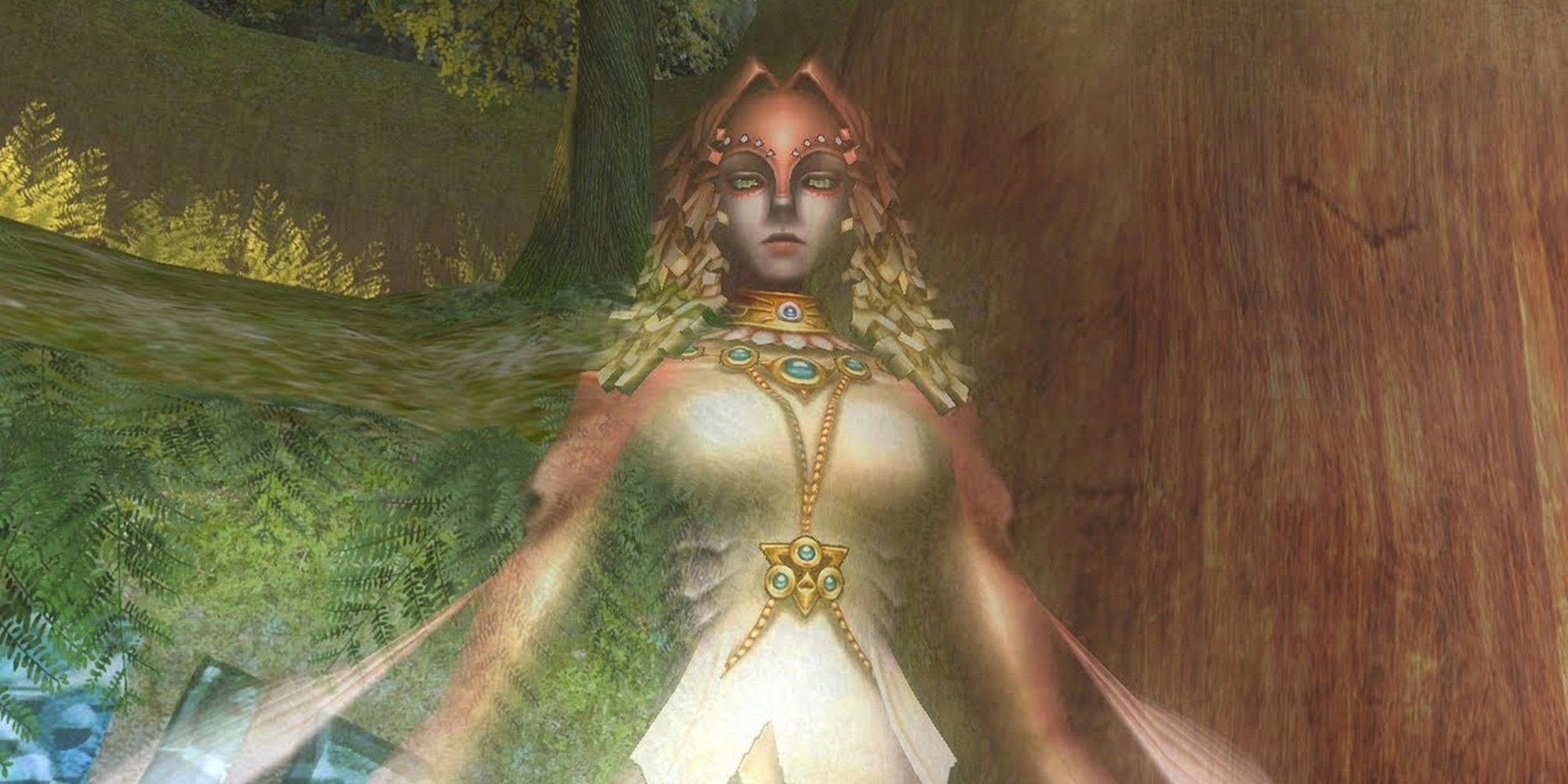 The Zora have returned in Twilight Princess, living in Zora’s Domain off of Lake Hylia once again, though they’re more spread out now in an attempt to care for the Lake. They’re the protectors of the sacred Lakebed Temple, which can be found at the bottom of Lake Hylia.

Once again, their Domain is covered in ice, and Link and Midna are tasked with teleporting the molten remains of a Magma Bomb from Death Mountain to Zora’s Domain to begin melting it. After this, Queen Rutela of the Zora appears as a spirit after her execution and asks you to save her son, Prince Ralis, in exchange for her help. You’ll receive the Zora Armor for doing this, which allows you to remain underwater long enough to deal with the enemies that have infested the Lakebed Temple.

Breath Of The Wild

The Zora once again live in Zora’s Domain in this game, which you can find in the Lanayru Province. As you make your way toward their homestead for the first time, you’ll meet Zora Prince, Sidon, who’ll help you make your way up to their Domain. The Zora have taken on a more sharklike appearance, with different head shapes and sharpened teeth.

Upon arrival, you’ll meet Sidon’s father, King Dorephan, who laments about letting his daughter, Princess Mipha, pilot Divine Beast Vah Ruta during the Calamity, as it resulted in her demise. He reminds Link of this upon realizing the Hero has lost his memories and reminds him that the pair were close.

Vah Ruta, without a pilot, has been spitting water over the area nonstop, resulting in unending rains that put the entirety of the Domain at risk of destruction. Link and Sidon team up to get the Hero inside the Beast, where he completes a series of tasks to regain control. After besting the Blight that killed Mipha 100 years prior, she appears to Link and offers him Mipha’s Grace, a power-up that periodically allows Link to survive a fatal hit.

If you clear all the Divine Beasts before beginning the Calamity Ganon fight, Mipha will assist the other Champions in knocking Ganon’s health down considerably before your battle begins.