Founded in 2007, Lookout offers a range of mobile security products spanning both the consumer and business realms. For enterprises specifically, Lookout offers a cloud-based platform designed to detect and respond to cyberattacks through workers’ mobile devices, including phishing attacks, ransomware, and data breaches. The San Francisco-based company claims a number of notable clients including Landis+Gyr, Henkel, Nasdaq, and Schneider Electric.

Among its products is Lookout Mobile Endpoint Security, which gives organizations visibility into the risks associated with their workforce’s smartphones and tablets, and lets them apply policies to reduce those risks. Given its direct reach into both the consumer and enterprise verticals, the company has access to a significant amount of data from across 185 million mobile devices, which helps Lookout adapt its machine learning algorithms to to align with new and emerging threats. 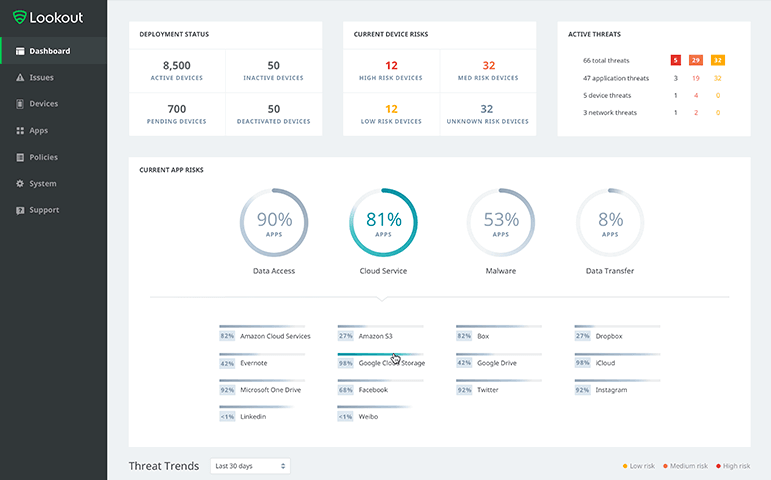 Founded in 2010, CipherCloud has increasingly focused on an emerging concept in cybersecurity known as SASE (pronounced “sassy“), a term first coined in 2019 by Gartner. SASE is concerned with ensuring that users and their devices have secure, speedy access to their applications and data wherever they reside by adopting a single cloud service located at the network edge. At its core, SASE sets out to address the siloed security measures that are currently spread between on-premises and the cloud. As mobile, cloud, and edge computing have increasingly replaced desktops, and local area networks (LANs) and data centers, it makes sense to transition security, too, to minimize latency and other performance issues.

According to Looker, it plans to combine CipherCloud’s SASE technologies with the Lookout Mobile Endpoint Security platform, putting it in a strong position to “deliver the industry’s first end-to-end platform that secures an organization’s entire data path from endpoint to cloud,” according to a press release.  This integrated approach will help it “close the gaps” that emerge when companies use multiple products from different security vendors.

It’s also worth noting that with CipherCloud on board, this helps Looker diversify its product offerings ahead of a major evolution in cybersecurity. Gartner predicts that SASE will be a $11 billion market by 2024, with “at least 40% of enterprises having explicit SASE strategies.”