In Magic the Gathering's Commander format, mana is everything. Without mana you can't cast spells, and if you can't cast spells you're going to be left behind. A game of Commander is an arms race to see who can build up the most resources to pull off their deck's gameplan, and mana rocks form a foundational part of that strategy.

Mana rocks are artifacts that can produce mana. They can be an excellent way to ramp, as you can play as many of them on your turn as you can afford. They're so central to the Commander format that many of its most ubiquitous cards are mana rocks. But which are the most popular ones you should be running in your deck? Here are the top ten mana rocks for Commander. 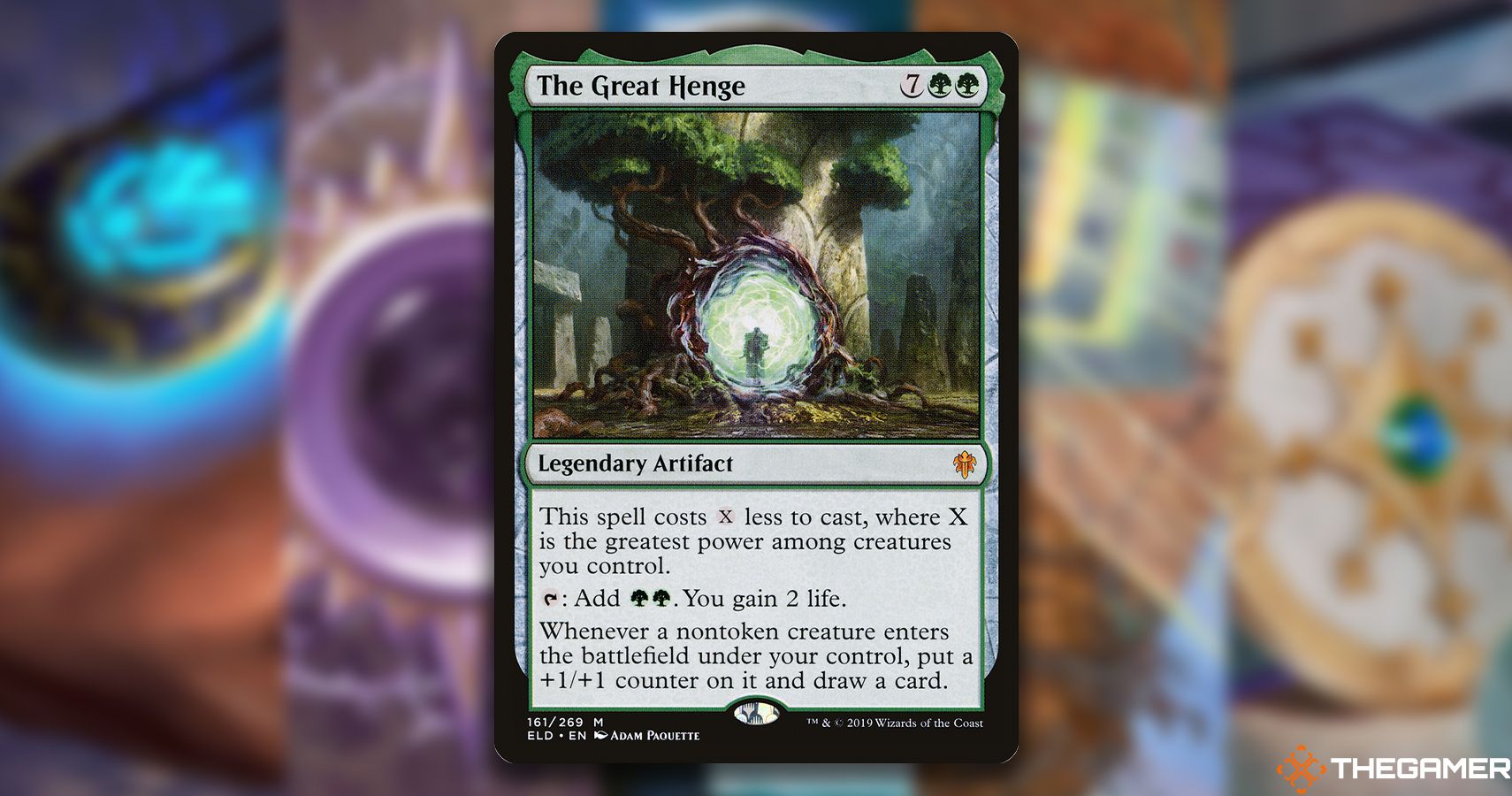 The only coloured mana rock on this list, The Great Henge is an absolute beast for virtually any deck that uses green. It used to be heavily played when Throne of Eldraine was in Standard, but has since found life as a popular mana rock in Commander.

The Great Henge costs seven generic and two green mana, although its cost is reduced by the greatest power among creatures you control. It taps to add two green mana and two life, and it even puts a +1/+1 counter on any non-token creature that enters the battlefield under your control before giving you a card draw. Throne of Eldraine was a very powerful set, but this does it all. 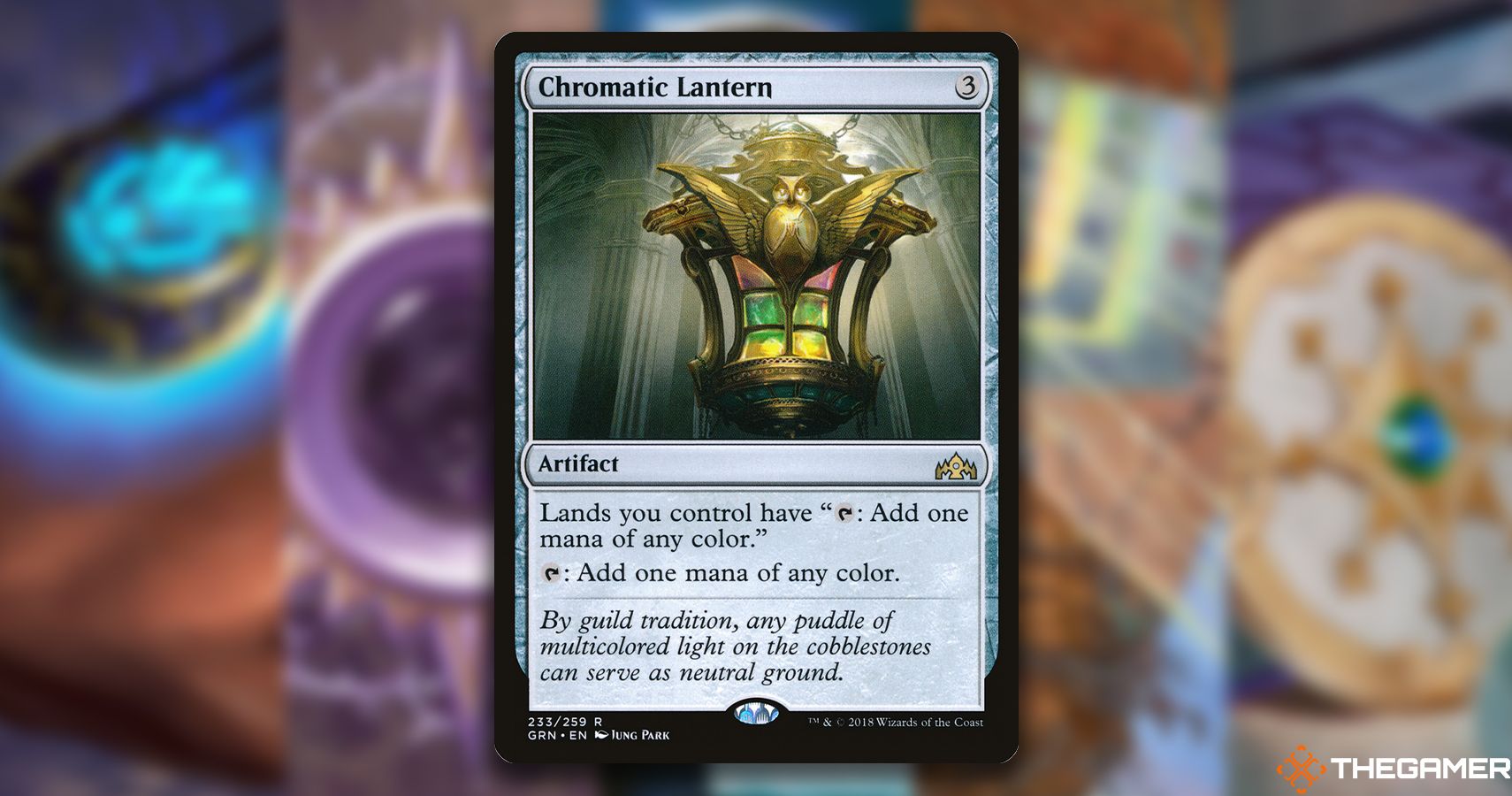 It isn't quite as powerful as Chromatic Orrery, which taps for five colourless and lets you spend mana as if it were any colour. But Chromatic Lantern's lower mana cost and still-potent mana fixing abilities make it the more popular choice. 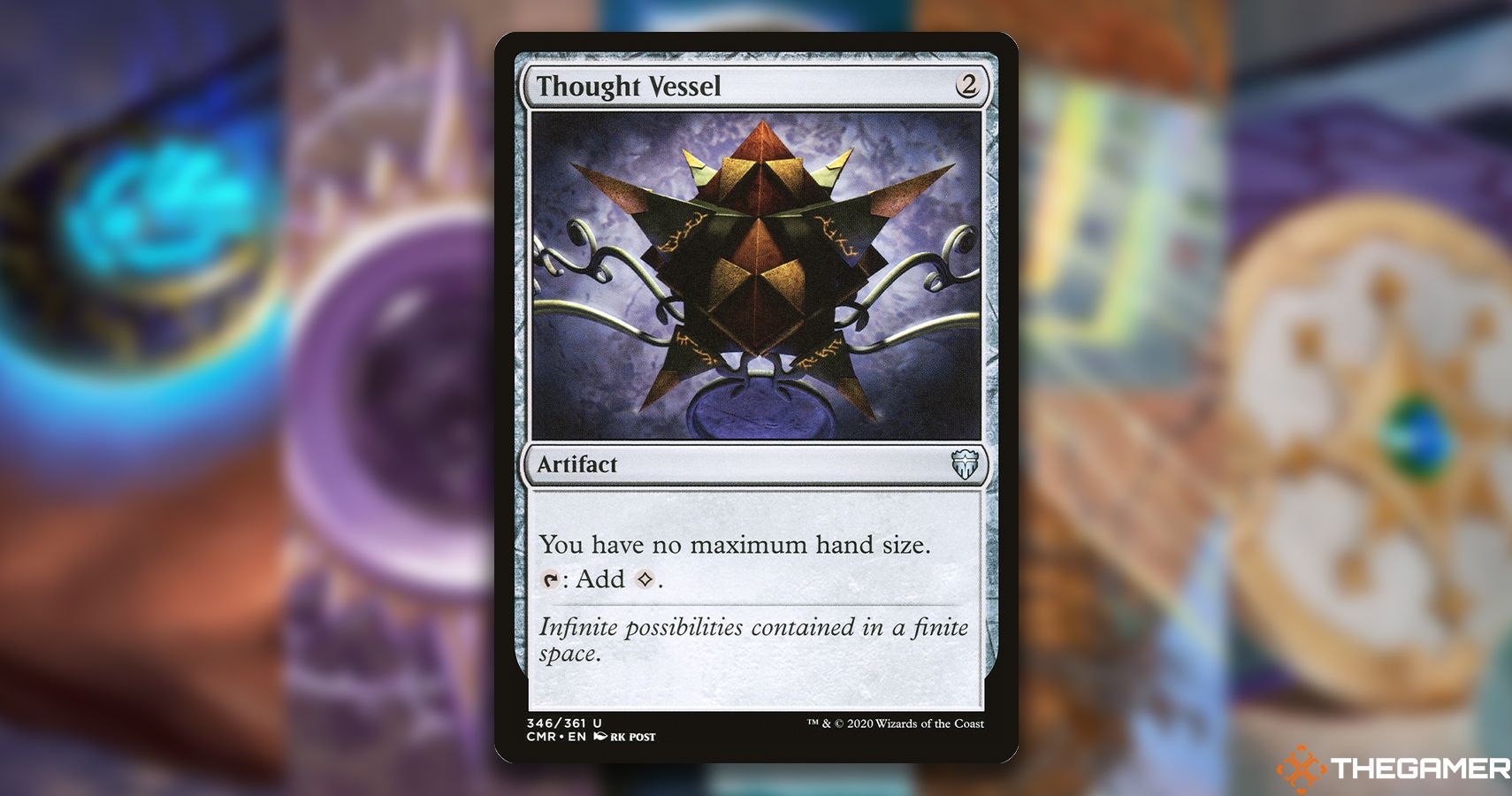 It might not be the biggest mana-producing mana rock out there, producing just one colourless mana, but that isn't the point of it. Thought Vessel's second ability is the main appeal of it, as it gives you no maximum hand size.

For decks that draw lots, Thought Vessel is invaluable. You won't have to discard down to seven cards at the end of the turn, giving you a major advantage over any other player. You could argue it isn't quite as good as Reliquary, which does the same thing but is a land that is more difficult for an opponent to remove, but it's still a vital tool in a huge number of decks. 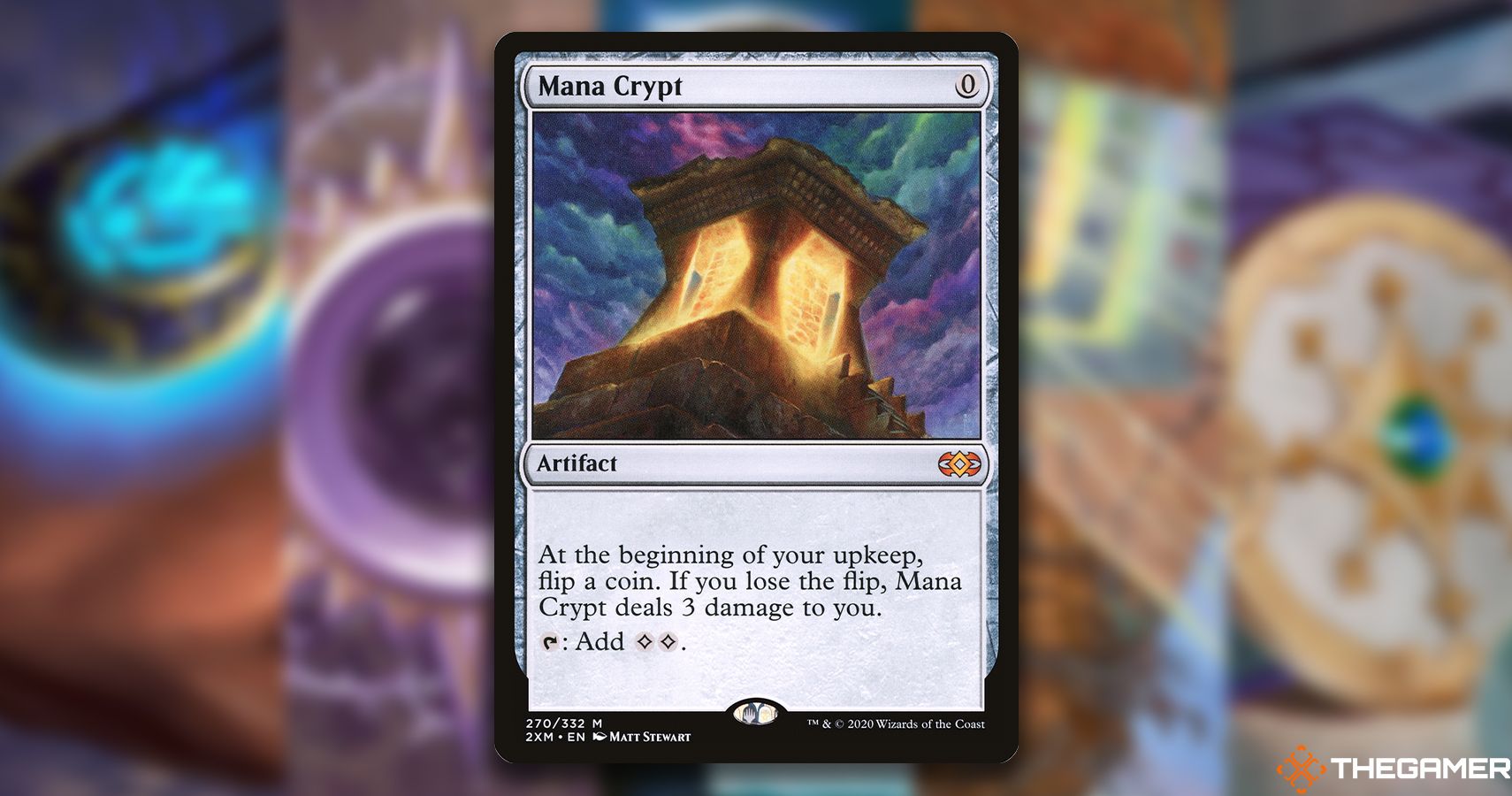 A cEDH (Competitive Commander) staple, Mana Crypt is one of the best turn-one plays you can make in any game. Costing zero mana and tapping for two generic, its 'drawback' of having a 50/50 chance of dealing three damage to you on your upkeep is nothing to worry about in Commander where the starting life total is 40.

The thing with Mana Crypt is it tends to appear in higher-power games where the game might be over in just a few turns. Even if you were unlucky and it damages you every turn, the price would be justified by giving you that two extra mana to push towards your win condition. When you ignore that damage, Mana Crypt is a free Sol Ring, which is just wild. 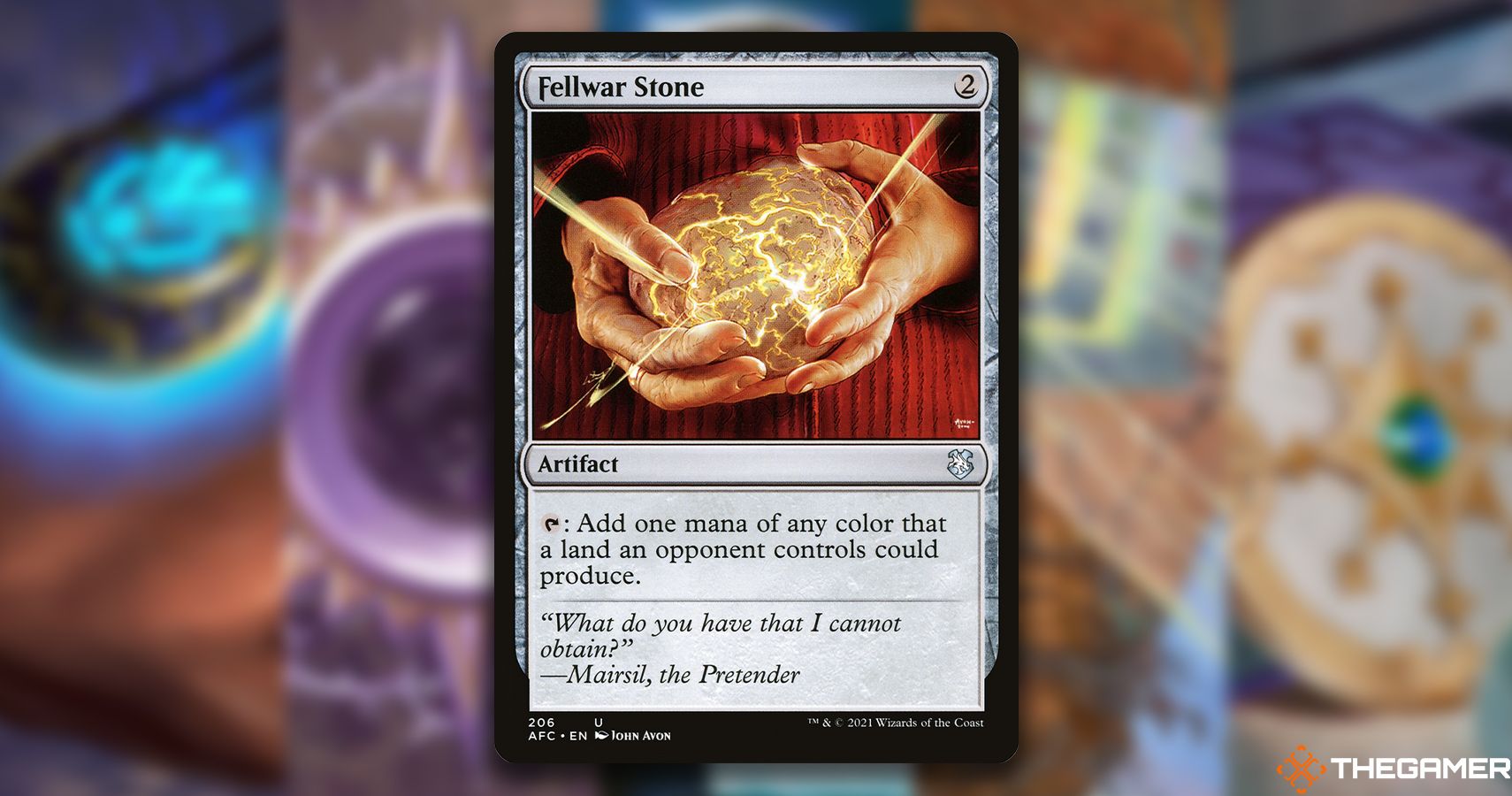 Fellwar Stone is interesting because it produces mana of a colour another player could create. With three opponents, there is a high chance of someone sharing a colour with you to make Fellwar Stone usable, but there is always a chance that you'll be left with a mana rock that can't produce coloured mana you can use for anything other than generic costs.

It's a card that used to see a lot more play until better alternatives came along, but that doesn't make Fellwar Stone bad by any stretch of the imagination. Costing two and tapping for a wide range of colours (depending on your table) is excellent; it's just a bit outdated, in the same way Exotic Orchard is to Command Tower. 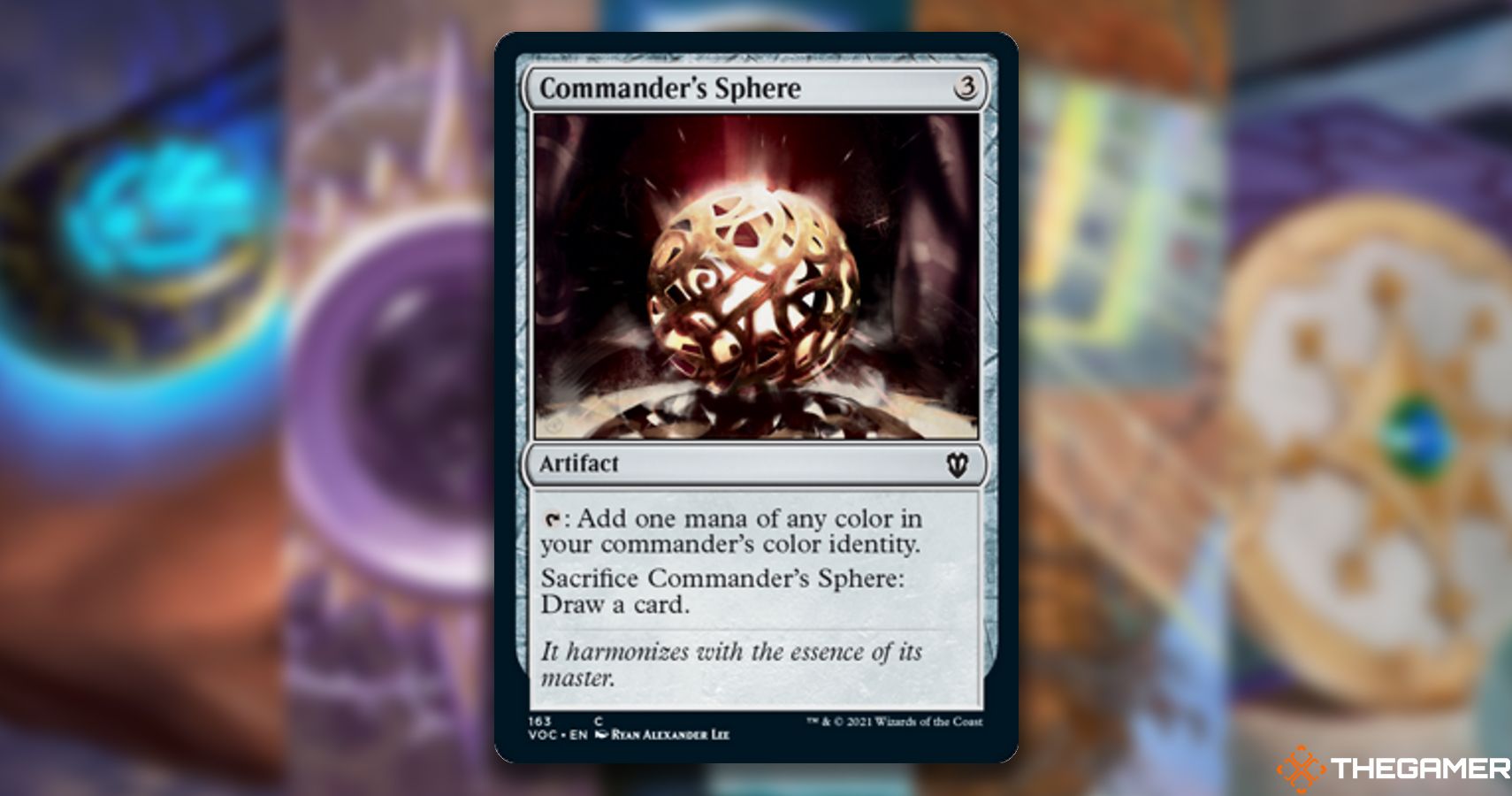 One of the most iconic cards in the format is Commander's Sphere. Costing three generic mana, it can tap to produce one mana of any colour in your Commander's colour identity. Considering every spell in your deck can only have those colours, that isn't a potential downside in the same way Fellwar Stone might be.

You can sacrifice Commander's Sphere to draw a card as an added bonus. Considering you can do this at instant speed, it effectively makes the card something an opponent can't remove without giving you a small advantage. It works even better with Commanders like Osgir the Reconstructor, who can create many copies to keep the card draw going. 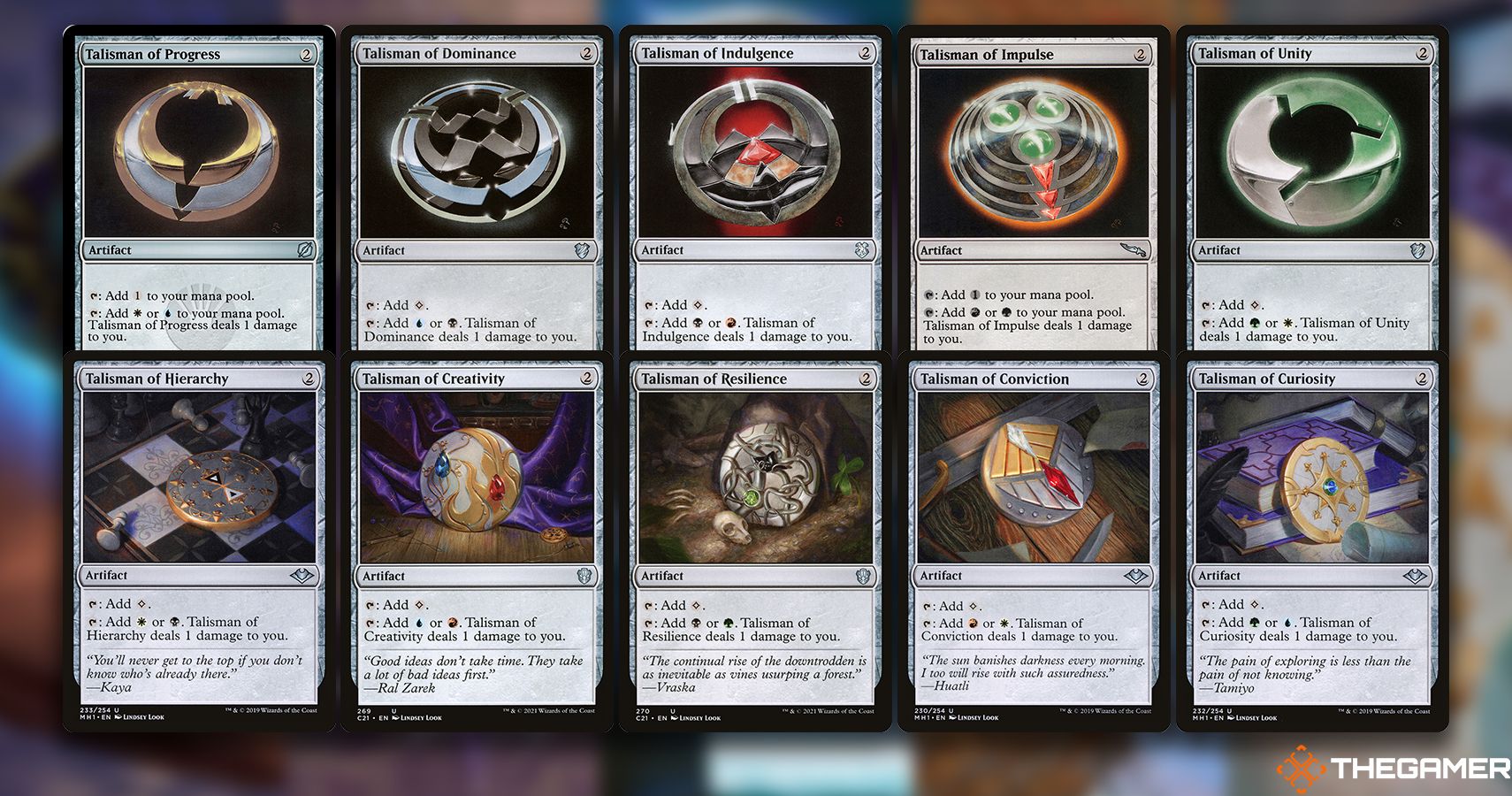 Technically only a handful of the ten talismans see regular play in Commander, and some more than others. But they all do the same thing, so we'll lump them all together.

The Talismans are a cycle of ten artifacts that cost two mana. They can either be tapped to produce a colourless mana, or one of their two colours while also dealing one damage to you. For example, Talisman of Creativity (the most popular Talisman) can tap to make a red or a blue mana, while Talisman of Hierarchy makes a white or a black.

Like Mana Crypt, the thing about the Talismans is that their downside is negligible in high-life-total formats like Commander. Taking one damage to potentially win the game with a spell you'd have otherwise been unable to afford is a worthwhile tradeoff. 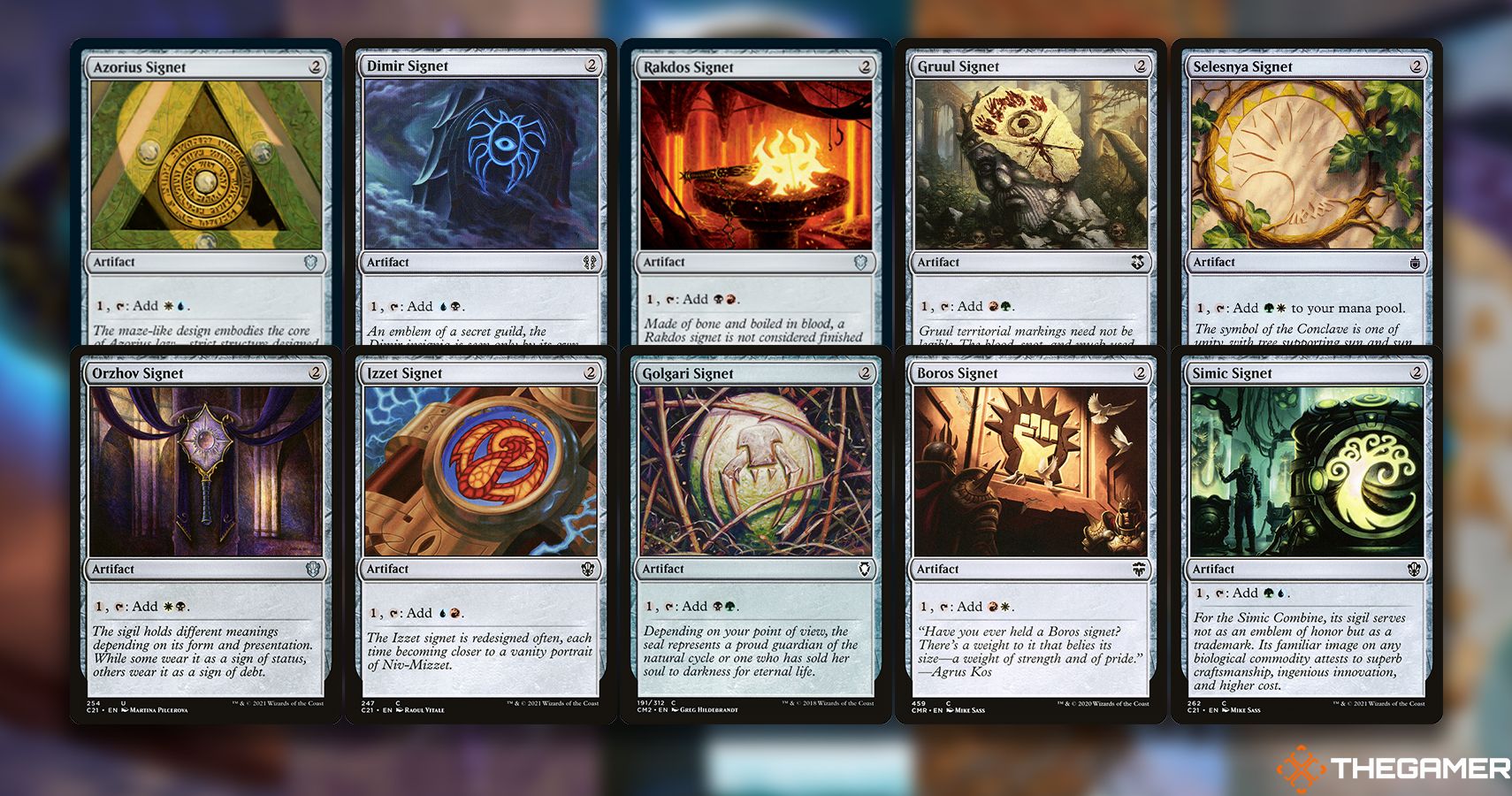 Like the Talismans, this is a cycle of artifacts where some are more popular than others.

The Signets are the only mana rock on this list that need mana paid into them to get mana out, but in exchange they produce two mana, one of each of the colour pair related to their Ravnica Guild. Izzet Signet makes a blue and a red, Orzhov Signet makes a white and a black, and so on.

It can be a bit tricky to keep track of in-game, especially when you're drowning under a sea of mana sources, but Signets are a great way to push your limited mana resources just that little bit further.

They're also good mana fixers. If you're getting mana flooded in one colour and screwed in another, Signets are a good way of evening things out and ensuring you always have some access to both. 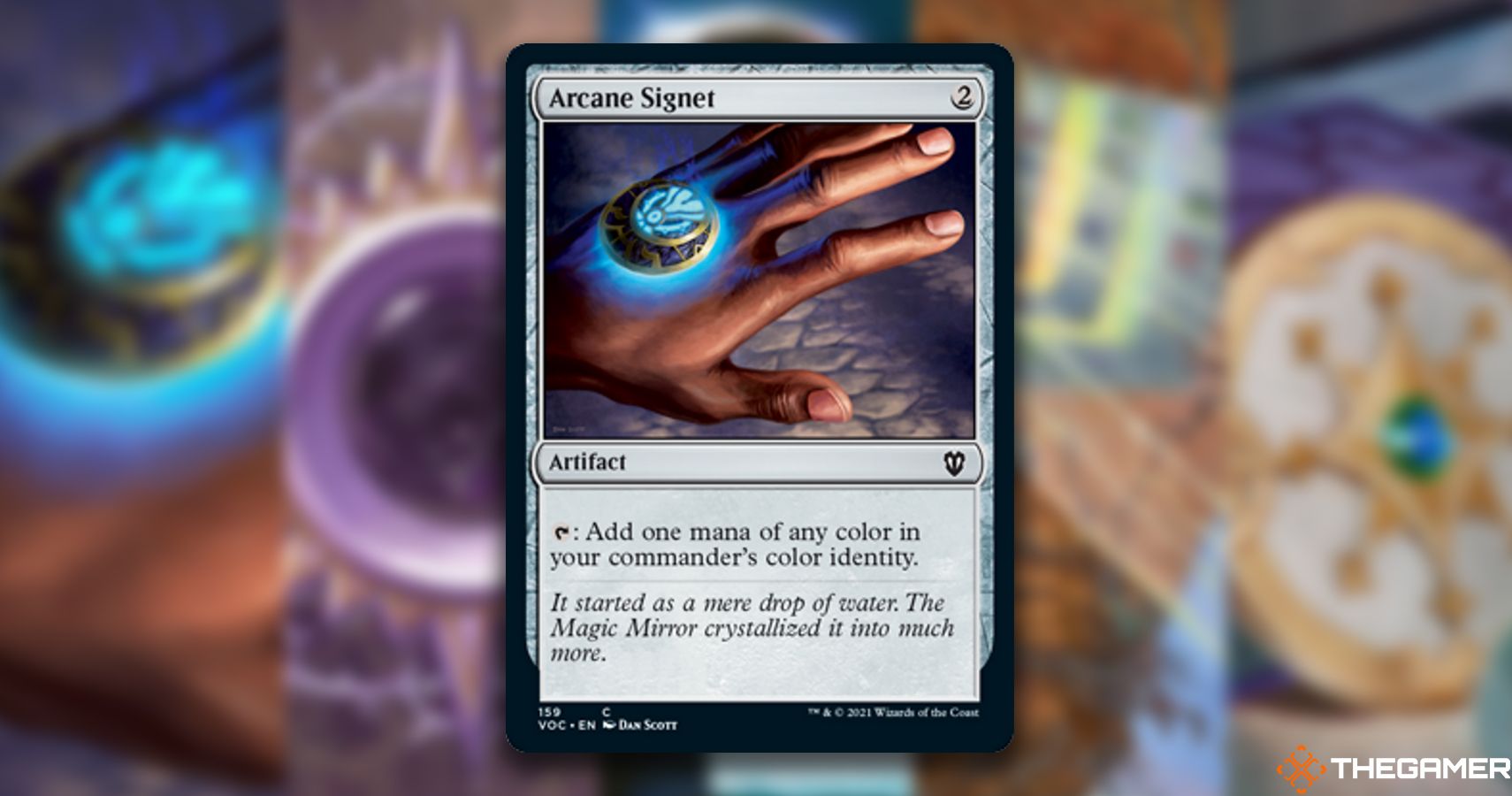 This is the card that replaced Fellwar Stone. It costs the same, but instead of tapping for any colour an opponent can produce, it can tap for any colour full stop.

Arcane Signet is a controversial card, and many players and Magic designers think it was a mistake. Launching in Throne of Eldraine – a notoriously overpowered set – it highlighted how careful designers have to be when making cards for Commander. Cards don't rotate out, and very few get banned, so when mistakes like this come along, they tend to stick around forever.

Regardless, Arcane Signet is an incredible mana rock because of its flexibility. There's only one card more prevalent than it in the format, which is… 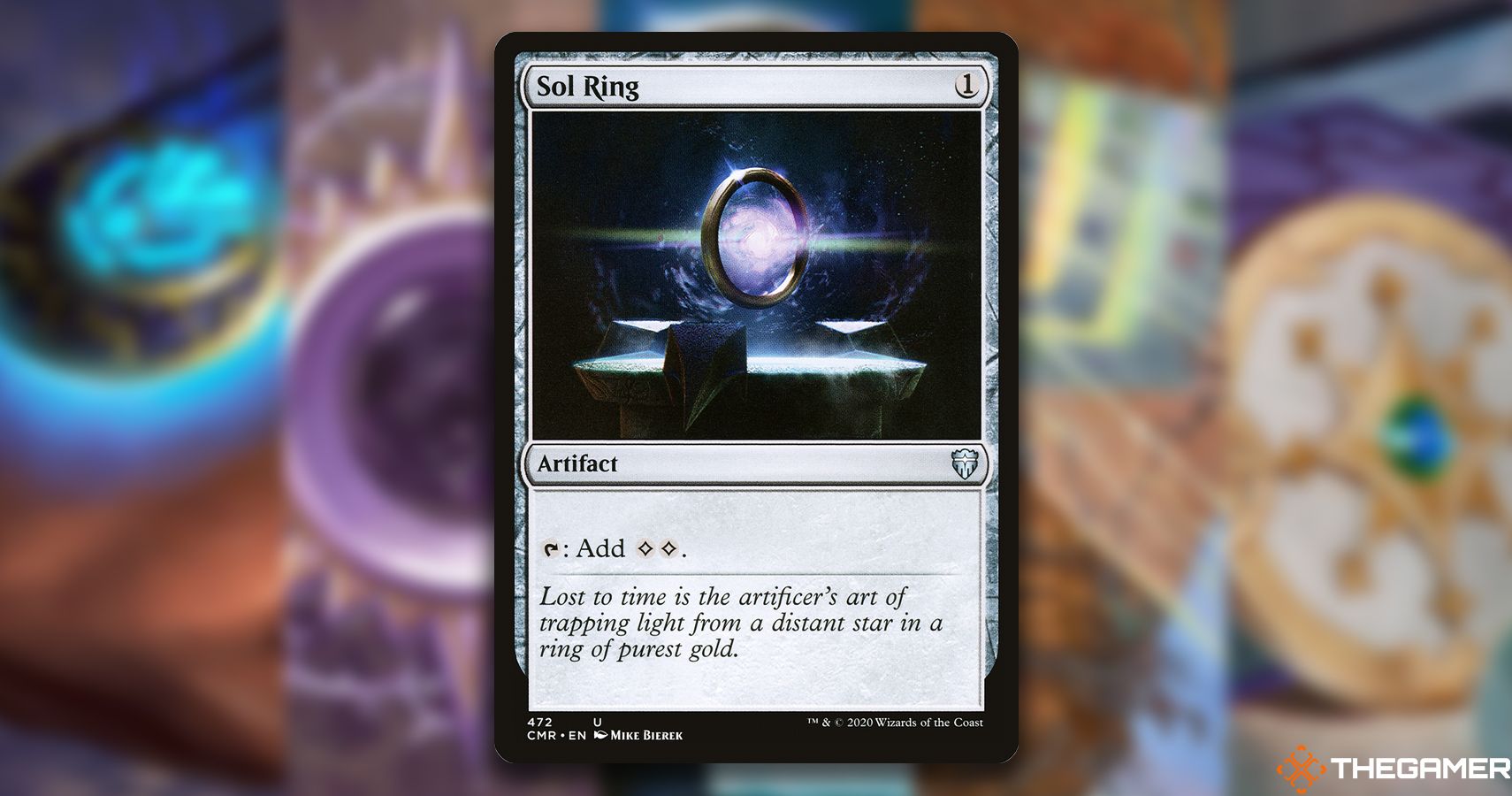 Sol Ring is way, way too good. It's so good that Commander is the only format where it's entirely legal, with it being restricted (only one copy in a deck) in Vintage and outright banned in Legacy. There are regular discussions about whether Sol Ring should be banned in Commander too, but no decision has been made so far.

Costing one generic mana and tapping for two colourless Sol Ring is an automatic inclusion in almost every Commander deck. It's included in every preconstructed deck Wizards of the Coast has released, and is in a whopping 82% of decks on EDHRec.

Sol Ring is undebatably good – it's a Mana Crypt without the damage and is way cheaper to buy. But some also feel it's detrimental to the Commander format, as its inclusion in almost every deck means that's one less card slot available for creative or fun deckbuilding. It's a formality – you open your deckbuilding website of choice, add Sol Ring and Arcane Signet, and then get to work on building the deck.

Should it be banned? Maybe. Is it a powerhouse of a mana rock? Absolutely.