Kamigawa: Neon Dynasty is the newest set for Magic: The Gathering, the popular card game printed and maintained by Wizards of the Coast. Kamigawa is a plane inspired by feudal Japan and East Asian mythologies. However, Kamigawa: Neon Dynasty sees a post-industrial Kamigawa, where magic and technology clash in a realm that has all but forgotten its past.

There are two Commander decks that have been printed for Kamigawa: Neon Dynasty, Buckle Up and Upgrades Unleashed. Buckle up is a blue and white deck that focuses on the vehicles card type first introduced in Kaladesh. Buckle Up wants to make the most out of vehicles to ensure a strong victory for the player who pilots the deck.

Padeem, Consul of Innovation is a rare blue Legendary Creature card from Kaladesh that gives all your artifacts hexproof and lets you draw an extra card on your upkeep if you have the artifact with the highest converted mana cost.

Giving all of your artifacts hexproof is enough of a reason to run Padeem. The possibility that your artifacts become all-but untouchable is powerful. This does leave Padeem himself as a target, but, if you attach something like Swiftfoot Boots or Lightning Greaves to Padeem, that problem is easily solfed. The possibility of drawing an extra card every upkeep just sweetens the deal. Admittedly, you likely won't be running Blightsteel Colossus or Darksteel Colossus, but your opponents probably won't be either. With many Vehicles having a moderately high mana cost of five or six, Padeem is likely to net you a few extra draws. The Conqueror's Galleon is a rare Vehicle that was printed back in Ixalan that has the intention of being transformed upon attack. The crew cost if four, which can be a little hefty, but the Galleon itself has a toughness of ten so it's at least hard to destroy through damage.

The other side of the card, Conqueror's Foothold, is a solid utility land that can give the player a few extra draws and even bring a card back from the graveyard. Both modes are a little heavy on mana cost, but being able to return artifacts to your hand is a very useful option in case any of your all-star vehicles are destroyed. 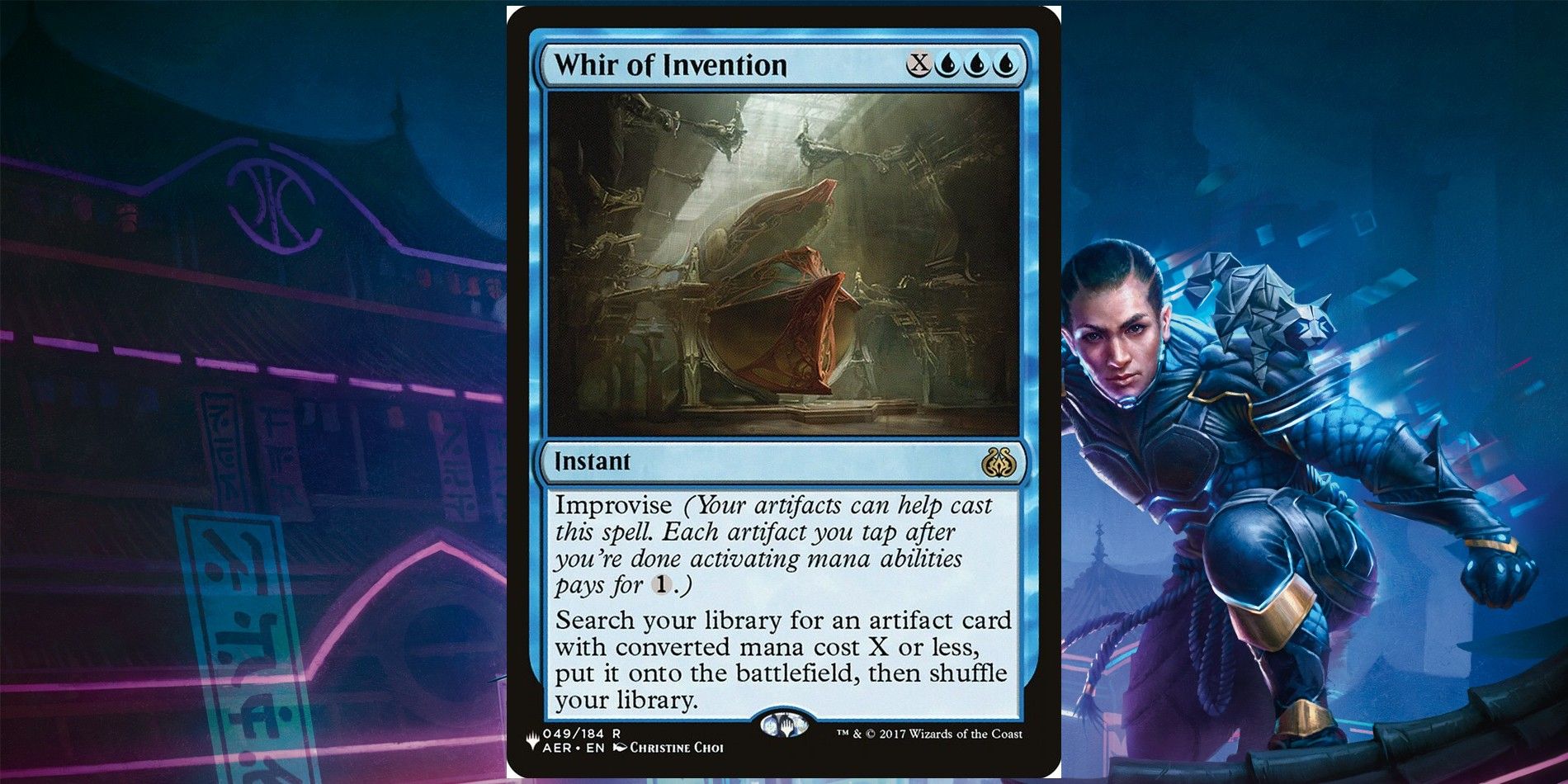 Whir of Invention is a rare powerful Instant from Aether Revolt that can search up and play an artifact from your library, provided you can pay the mana cost. Thankfully, Whir of Invention is essentially the artifact counterpart to green's Chord of Calling. Whir's generic X mana cost can be paid for by tapping down untapped artifacts on your field.

Being able to search for the card you need on the fly is essential in a singleton format like Commander. With the number of artifacts that a Vehicle deck is likely to have in play, Whir of Invention will likely be able to pay for an expensive and powerful artifact. 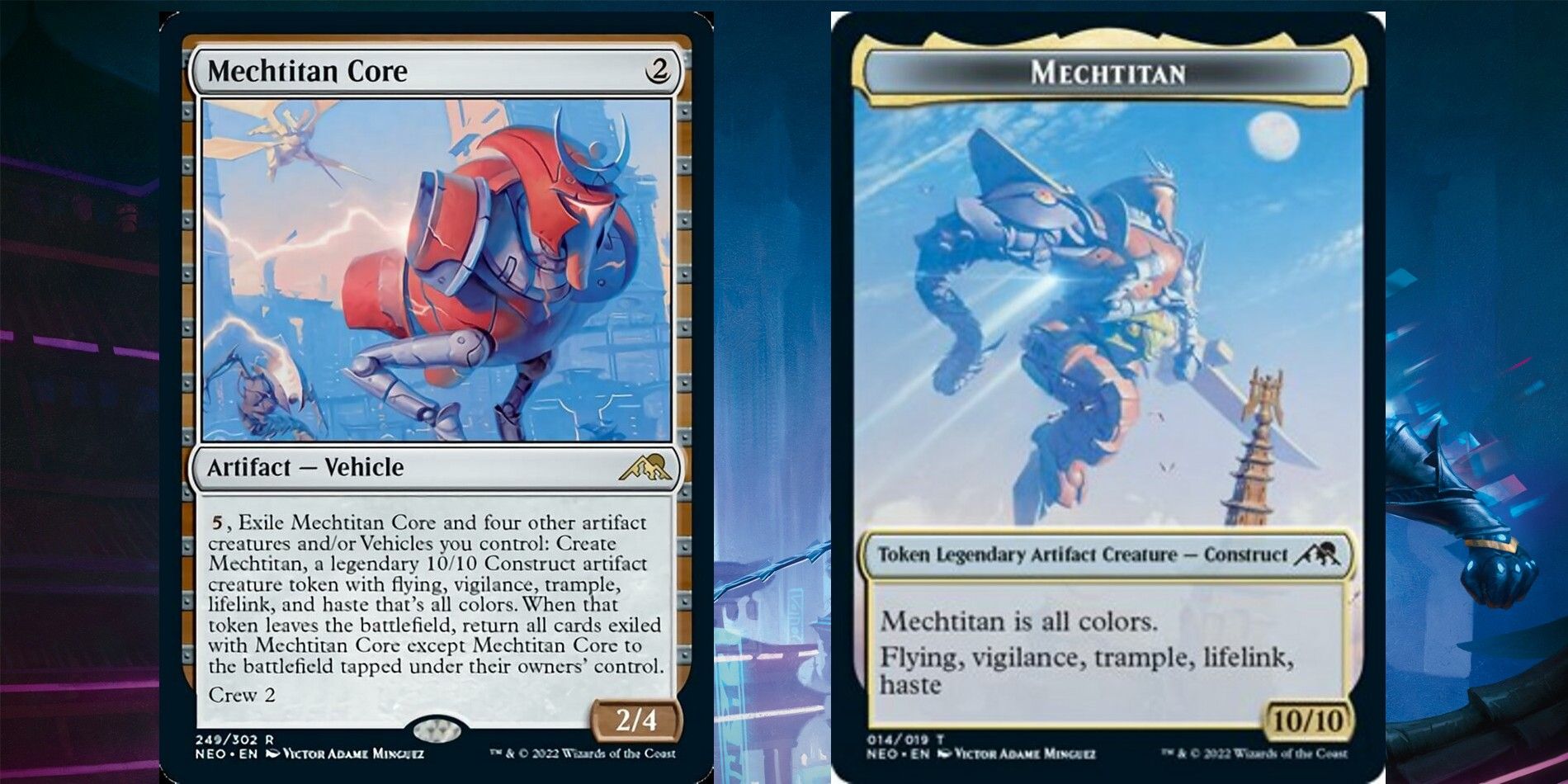 Mechtitan Core is a new rare Vehicle from Kamigawa: Neon Dynasty that surprisingly didn't get included in the Buckle Up decklist. Crewing and attacking with Mechtitan Core is easy, but that's not really the point of the card. The point is Mechtitan Core's activated ability, which should be fairly easy to pay for given the amount of vehicles and other artifacts that are in Buckle Up's decklist. Exiling four of your own artifacts (plus Mechtitan Core) does hurt, but they do return should anything happen to the Mechtitan token.

Getting a 10/10 monster out of the deal makes Mechtitan Core an absolute must for a Vehicles deck. On top of that, the Mechtitan has flying, vigilance, trample, lifelink, and haste, so it can attack immediately, is almost guaranteed to do damage and gain you life, and can still be used for defense. The relatively low mana cost of Mechtitan Core and its activated ability means the Mechtitan token is likely to be out early and will be able to devastate an opponent. 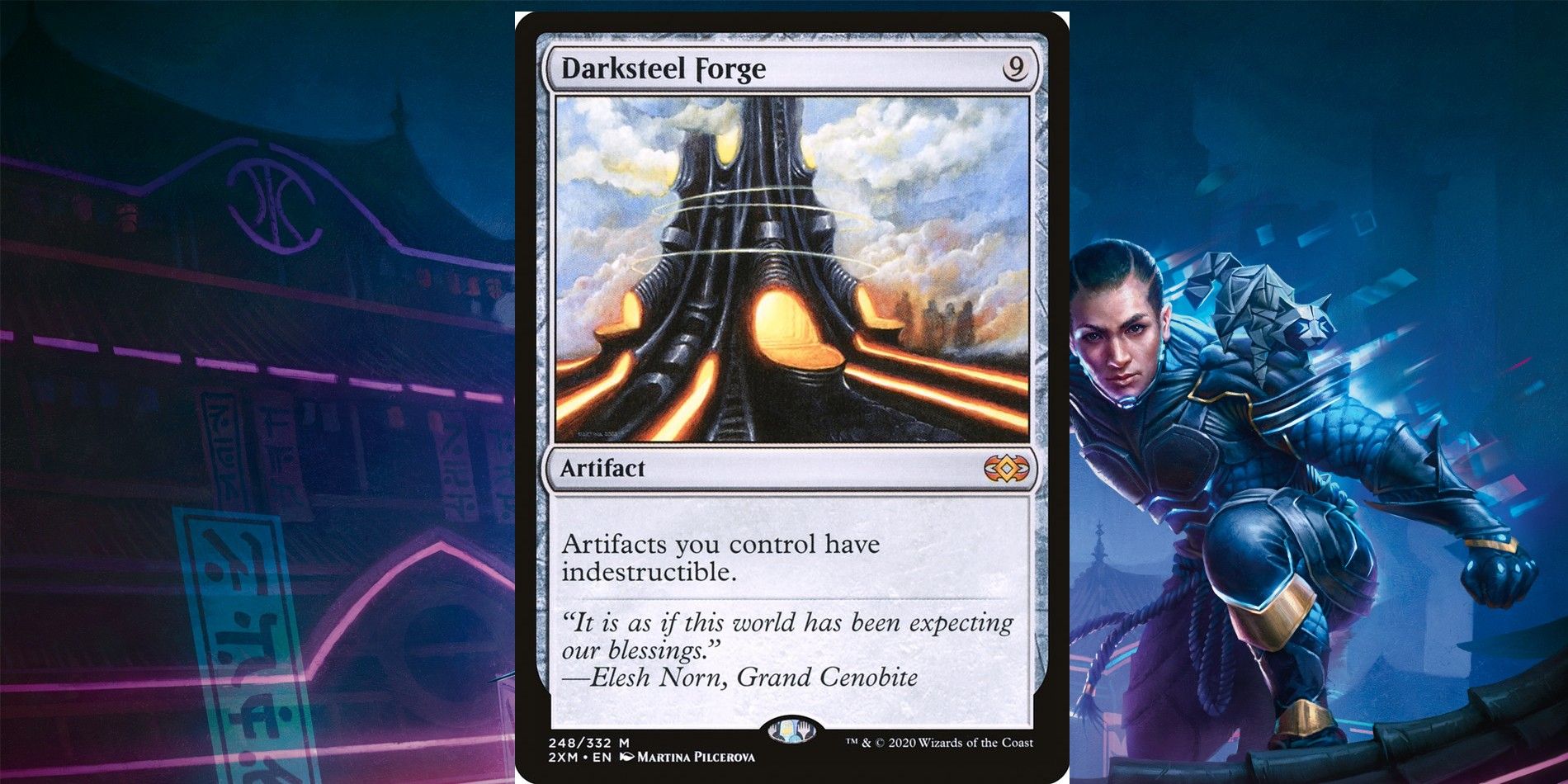 Darksteel Forge was originally a rare printed in Darksteel that has received a handful of reprints at rare and mythic rare. Its effect is straightforward, as it gives all artifacts you control (Darksteel Forge included) indestructible.

The mana cost on Darksteel Forge is hefty, but it's an undeniable monster in a vehicles deck. Making all artifacts, such as Weatherlight, Mechtitan, Shorikai, and Skysovereign, indestructible is a swift path to victory. Plus, Darksteel Forge's mana cost can be easily paid if you have mana rocks like Sol Ring, Gilded Lotus, Hedron Archive, or Thran Dynamo. If Darksteel Forge is paired with Padeem, your opponents will be virtually unable to destroy your artifacts.