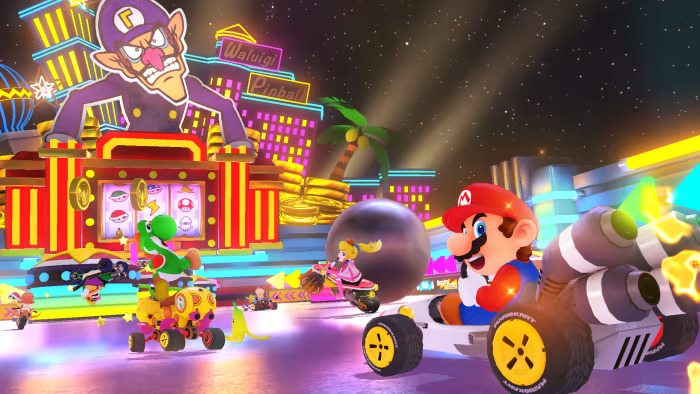 First released in 2014 for the Wii U, it won’t be until the end of 2023 until Mario Kart 8 is finally complete. In typically inscrutable fashion, Nintendo waited until this year to release a new set of DLC, with 48 courses set to be released in sets of eight. This is the second wave and, as before, all of the courses are remakes of tracks from existing games, but with an emphasis on mobile title Mario Kart Tour.

Wave 1 came out in March and was generally well received. Given the generous pricing of the ‘Booster Course Pass’ it’d have to do a lot wrong to feel a complete rip-off and indeed there were only two real problems: 1) none of the tracks feature any kind of anti-gravity elements, which was meant to be the original’s main gimmick and 2) the weird obsession with Mario Kart Tour extends to applying its more cartoonish art style to all the new tracks, instead of making the Mario Kart Tour ones look like the original courses.

Nintendo presumably views this as a kind of advertisement for the mobile game (which is terrible and we don’t recommend). The abstract nature of many of the tracks in this wave means the change is less immediately noticeable than during the first wave, but the minute you start mixing up courses from the parent game, as happens automatically when you play online, the differences become obvious.

Neither of these issues are flaws, exactly, but they are odd decisions, with most of the courses having very little changes of any kind. Mario Circuit 3, for example, is just a straight recreation of the original SNES course, with no anti-gravity or other special features. It’s still a fun track, and the retro visuals retain their charm even without extra embellishment, but the lack of additional effort is obvious and disappointing.

Compare that to Donut Plains 3, from the base game, which is also a remake of a course from Super Mario Kart. Back then the graphics were very simplistic, forcing the tracks to be entirely flat, but the remake has underwater sections and moles that pops up from the ground, and if you didn’t know you’d never guess it was based on an old SNES game.

Game Boy Advance title Super Circuit used similar technology and yet its course was reinvented by essentially folding in half, Inception style, and forcing you to use the car’s anti-gravity abilities to get around. There’s none of that in this DLC though.

None of this affects the gameplay, which is still as instantly accessible but surprisingly nuanced as ever, and despite seeming like a malign influence the Mario Kart Tour courses continue to be surprisingly good. New York Minute, the first race of the Turnip Cup, is the worst, with the cartoonish visuals at their most distracting and little in the way of interesting obstacles or track layouts but the novelty of being set in a real city still has a certain appeal.

Each lap is different though, which is common in all the Mario Kart Tour tracks, with the Sydney Sprint course being a lot more fun, as you race around the harbour and through the opera house. There’re some fun ramp designs, that initially you only race under, and some tricky use of off-road sections that you have to keep switching lanes to avoid.

Like Ninja Hideaway before it, Sky-High Sundae is not identified as coming from Mario Kart Tour because it’s not been released for the game yet, so this is essentially an early preview and technically a brand new course.

Thematically, it’s obviously reminiscent of Sweet Sweet Canyon but the track style is completely different, with lots of ramps (actually ice cream wafers) and what almost counts as an anti-gravity section with a near vertical corner bank section. Oddly, your kart’s anti-gravity wheels are engaged for the entire course, but for no obvious reason as there are no other sections with that kind of design.

Although the Mario Kart Tour courses will count as new to anyone that hasn’t played the mobile game the real appeal with this wave is the retro console courses. The two crown jewels are Kalimari Desert and Waluigi Pinball, with the former being both one of our all-time favourites and the most changed of any of the track designs.

You now go onto the train tracks in later laps, and through the tunnel, which is great fun and exactly the sort of thing you used to wish you could do in the N64 original. There’s also a giant red ramp added, that is clearly the same design as from Mario Kart Tour, so while Nintendo appear reticent to retrofit courses with elements from Mario Kart 8 itself, they’re perfectly happy to deepen the links with Mario Kart Tour.

By comparison, Waluigi Pinball has barely changed at all from the original DS version but that’s fine as it’s one of the great unsung heroes from the series. You race through the innards of a giant pinball table, avoiding balls and moving bumpers – as well as some wicked corners that make drifting a necessity.

Snow Land from Super Circuit is much less unique, but it is a less literal remake of the Game Boy Advance original, with more 3D track design, a steep ramp, and lots of penguins getting in the way. Finally, there’s Mushroom Gorge from Mario Kart Wii which was always one of that game’s highlights, although it’s little changed here beyond the altered art design.

The constant shilling for Mario Kart Tour, and by association its awful microtransactions, sometimes leaves a bad taste in the mouth but it’s very hard to resent these DLC additions. Sky-High Sundae isn’t quite as good as the last wave’s Ninja Hideaway but the retro selection is better, so it equals out as at least as good.

The update has also brought with it some other minor changes, such as making the cars in Coconut Mall move again – a long standing source of irritation with some fans. Some will label this release as lazy but that’s not what’s going on here. Instead, it’s clear Nintendo’s number one priority is promoting Mario Kart Tour, and so all the design choices flow from that.

If the course pass was more expensive it’d be easier to take umbrage with that, but at less than 50p a track it’s very hard to see this as anything other than another welcome excuse to replay Mario Kart 8 and some of the series’ best courses.