Minecraft is a quintessential sandbox title for experienced and inexperienced players alike. It allows you – and indeed the community encourages you – to do slightly unrealistic things like building a house underwater, all the way up to ridiculous things such as playing the game using a bob-it.

However, great creative freedom comes with great responsibility. Or, rather, great bugs and glitches. It’s hard to allow players to do whatever they want without a few mistakes slipping into live versions of the game. These are a few of the most common problems that players have in Minecraft and the ways that you can fix them. 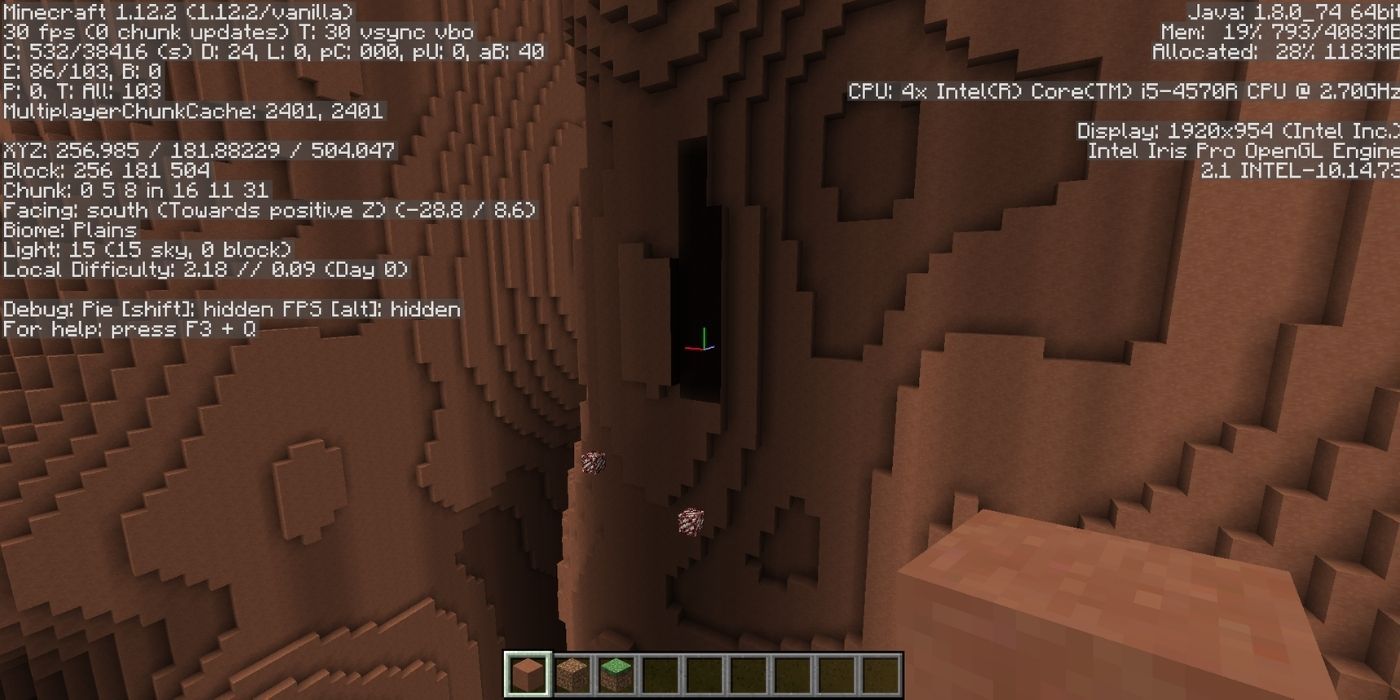 Minecraft has gorgeous lighting (that is only enhanced by beautiful fan-made mods and texture packs) and a day-night cycle to keep your experience flowing and varied. It’s extra odd, then, when a group of blocks isn’t lit up properly.

It’s caused, as u/Avantir on Reddit explains, by Minecraft incorrectly loading in the chunks and sub-chunks. To fix it, locate the subchunk that the lighting problem appears in and place a block within it. Then, you’ll be able to reload the world and find that it’s fixed! Unfortunately, the block(s) you put in the chunk needs to stay there, you can’t remove it, so try to find a creative way to include it in your build! 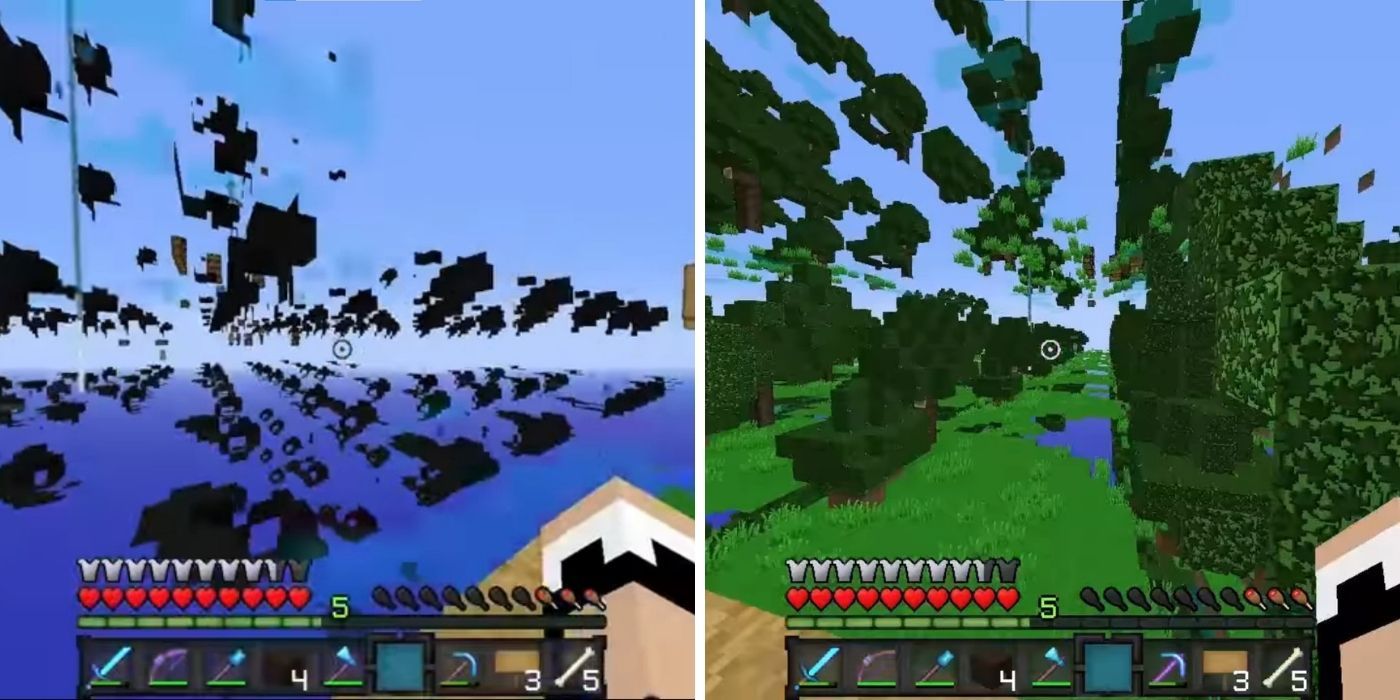 This glitch causes a chunk of Minecraft to spastically and rapidly shift between biomes, as shown above by Ordigamer on YouTube. It’s easy to panic upon seeing this glitch but there’s no need! There’s an easy fix.

Exit into the menu and click on options. From there, click on the button labeled “Video Settings.” Once you’ve arrived here, just scroll a little until you find the toggle-setting labeled “Use VBOs:” – if you’re having this glitch, this setting probably reads as “Use VBOs: OFF” so you’ll just click on it to change it to “Use VBOs: ON” and then hit done. Voila – your Minecraft world has been cured! 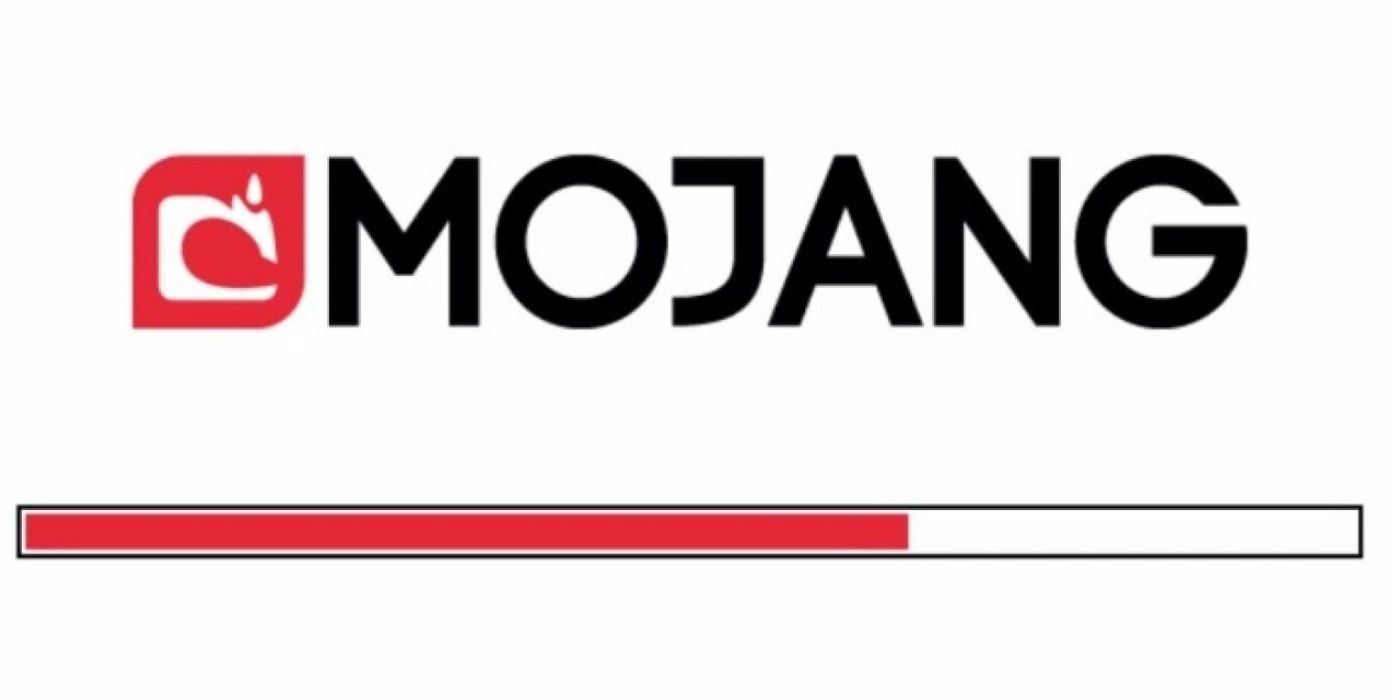 The name tells you everything you need to know in this bug: it means that the game loads forever and you never get around to any of the good stuff! Lots of players have this issue, especially when playing version 1.16 on the PlayStation or Xbox.

Conventional nerd wisdom is your best solution for the glitch. Just uninstall Minecraft from your device and reinstall it! Console players need not worry – your worlds and saves will be retained on the cloud for you to play after it finishes reinstalling. Boot up the game again and enjoy! 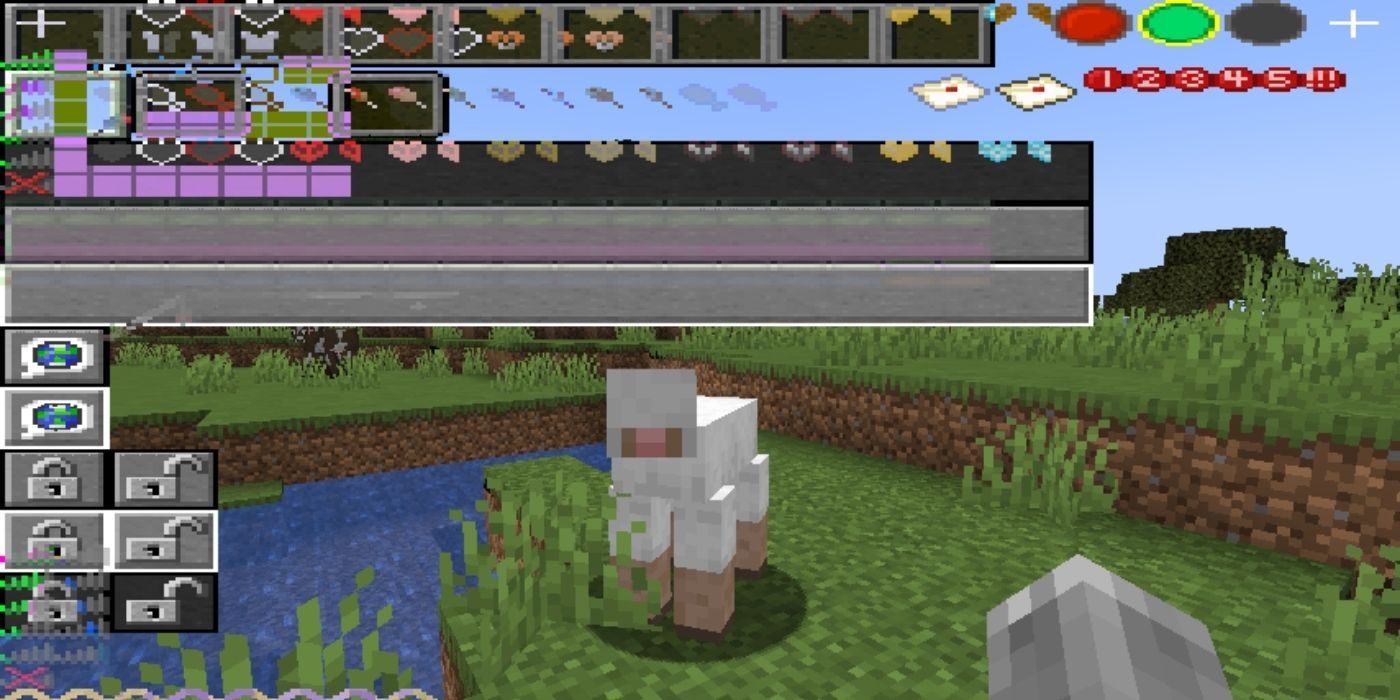 Visual glitches and errors are common for brand new Minecraft users. Lots of folks have heard it said that Minecraft is the game that will run on any computer; that may have been true in Minecraft’s early days but it’s much more advanced now. It still doesn’t need a high-end gaming rig to run, of course, but it can’t necessarily thrive on the tech that used to be standard.

The visual glitch in the image above and others like it are caused by outdated tech. In this case, the player was using a graphic card that was six years out of date. Don’t panic – you may not need to buy a new computer entirely. If you have a PC, lots of folks online are happy to walk you through the process of installing new parts. 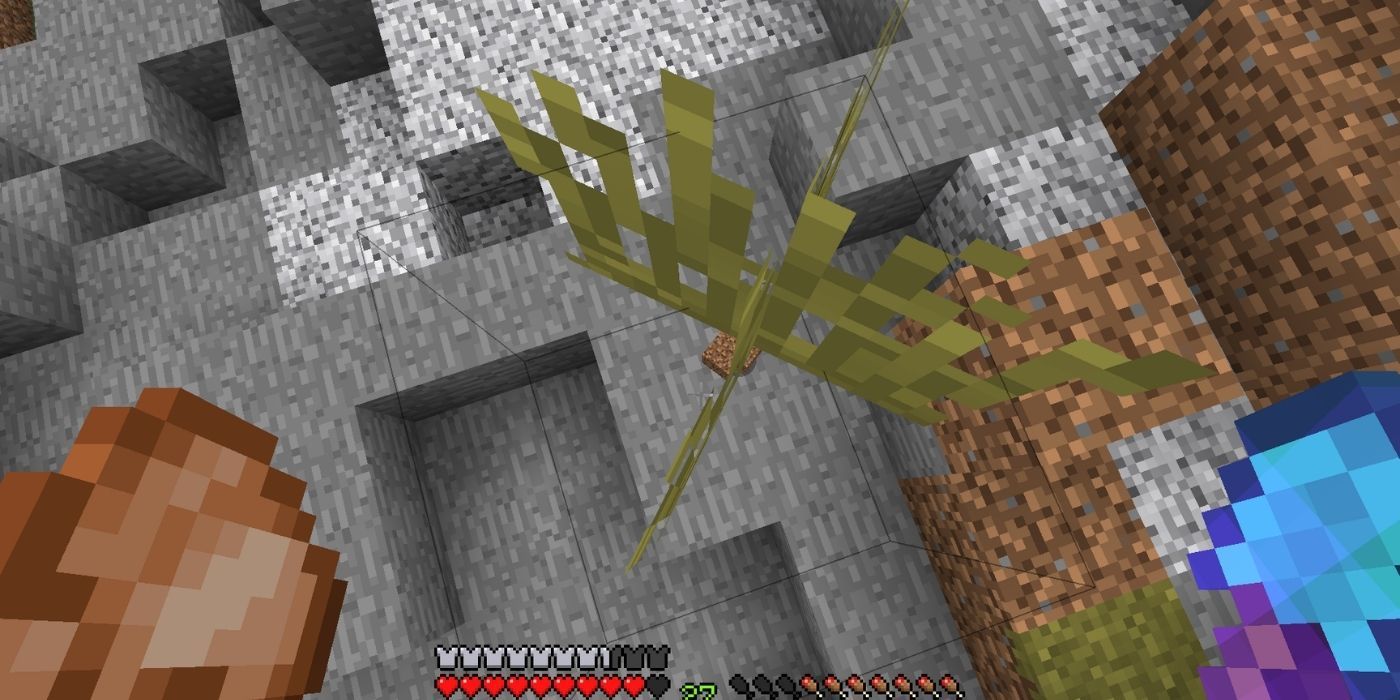 Minecraft does have magic – the beloved enchantment table – but the blocks shouldn’t be pulling magic tricks in the middle of a strip-mining session. Some players find that mining blocks too fast will cause the block to look like it’s disappeared, but will actually just become invisible.

There are multiple things you can try in order to fix this problem. Some people have success by taking blocks from their inventory and putting them down where the invisible block has formed (though you’ll have to find it), at which point you can remove the new block and fix the problem. Others found that if they went into their game settings and modified their view distance, the invisible blocks went away. Or, pressing F3 + A at the same time will cause all the chunks to reload and may fix the problem. As a last resort, always try shutting down your world and Minecraft, then load back in.

The “You’re Gonna Be Late For School” Glitch 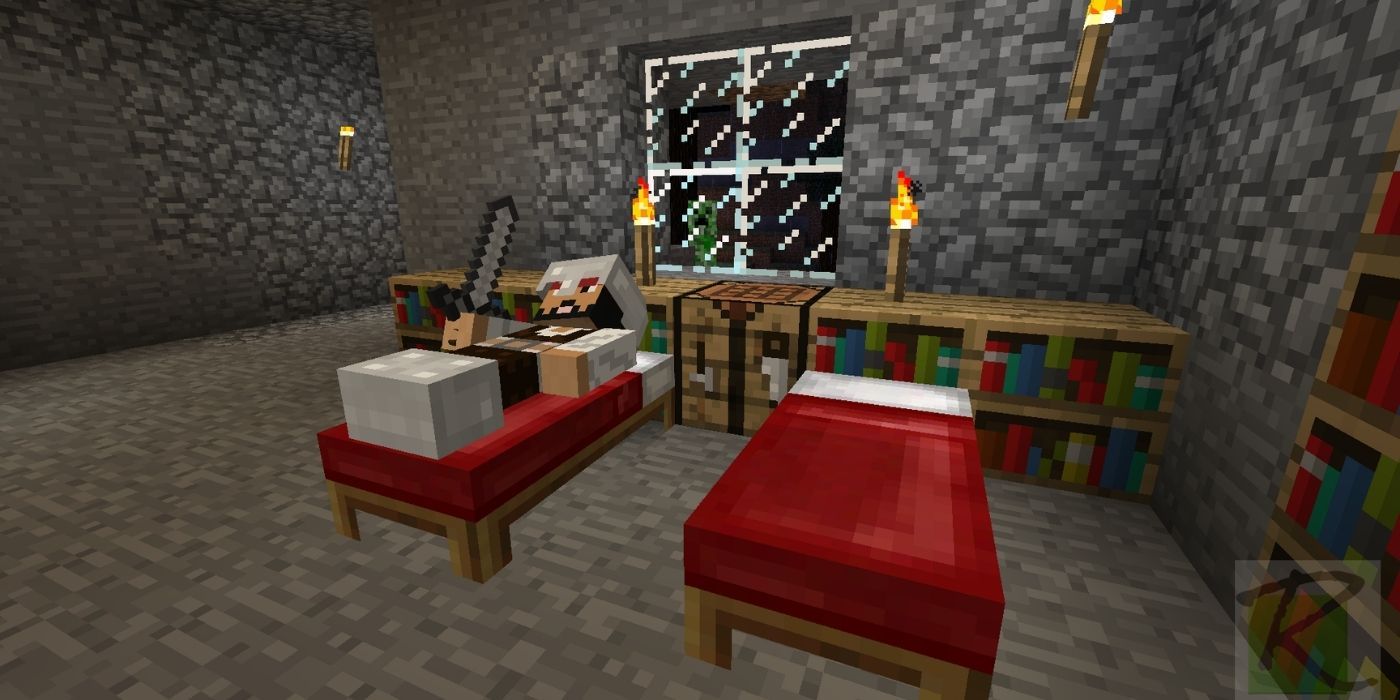 Another infamous glitch in Minecraft means that the player can’t leave their bed after sleeping in it. While the chat features usually still work properly, trying to move will be totally useless – your character just hangs out in bed all morning long.

The simplest solution is to use a command to teleport you somewhere else since the chat is available, but it doesn’t always work. If that fails, simply leave the game and reboot it. This will force your character to leave the bed (though it’s not the most convenient solution). If you find that you’re having this problem a lot, try to avoid whatever’s causing it: common causes include the sleep charm and the vanilla bed.