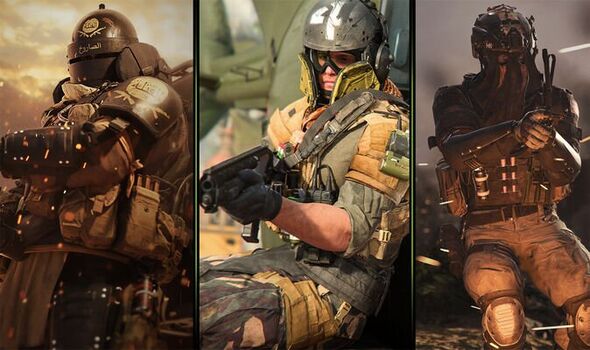 Call of Duty fans are counting down to the global launch of Modern Warfare 2. The new Call of Duty sequel has an October 28 release date on PS4, PS5, Xbox consoles and PC. If you’ve pre-ordered the game digitally, you can already play the campaign. However, if you’re more interested in playing online with your crew, the multiplayer servers will go online at approximately 5am BST UK time on Friday morning.

The game will launch with a whole host of multiplayer maps and modes, including a variety of 32-vs-32 Battle Maps.

Ground War, for example, sees two teams square off to capture an odd number of objectives on a large map.

“This is a supersized version of Domination, including vehicles for epic brawls,” Activision explains. “The first team to earn 250 points wins the match.”

Ground War Invasion, on the other hand, is described as a “massive chaotic battle with a mix of players and AI fighting alongside each other”.

“Utilise vehicles, Killstreak crates, and armored agents to gain the advantage over your opponent. The first team to reach 2,000 points wins the match.”

If you played a lot of Modern Warfare 2 during the beta period, then you’ll be interested to hear about some of the changes that have been made ahead of launch. Check out the patch notes below.

• We have added diamond icons above the heads of enemies. This should make it easier for players to clearly identify opponents in the game.

• We’ve shortened the overall range of footstep audio which will allow enemy players to get closer to targets before they are able to detect footsteps.

• We have also continued to tweak teammate footstep audio, which will now be quieter following feedback from the Beta.

• Only high-zoom optics (beginning with the ACOG and higher) and special optics such as Hybrids and Thermals will revert to first person POV.

• We believe this will enhance the third person experience while keeping the gameplay balanced. The feedback on this mode has been very positive, and we will continue to explore its use as a modifier.

• We have continued to tweak weapons across the game following both feedback from Beta players and game data.

• Players can expect more specifics on weapon tuning as we continue to support post-launch.

• We have been working hard on numerous updates to our UI that make accessing and customizing your loadout more seamless.

• We’ve made improvements to navigation of menus and will continue to optimize our UX.

• We have implemented some changes that aim to reduce lobby disbandment between matches. We look forward to testing this at a large scale and getting feedback.