The Dual Blades are one of the fastest weapons in Monster Hunter Rise, allowing you to dodge around the monster while remaining on the attack. With swift attacks, the option to dodge between animations, and aerial abilities, the Dual Blades are the perfect weapon for hunters who like to keep things fast-paced.

The Dual Blades are a good choice for players new to the Monster Hunter series, as they can be more forgiving thanks to their short attack animations and numerous dodges. Let's take a look at each of the Dual Blades' attacks and abilities, and some tips and tricks for using this weapon. 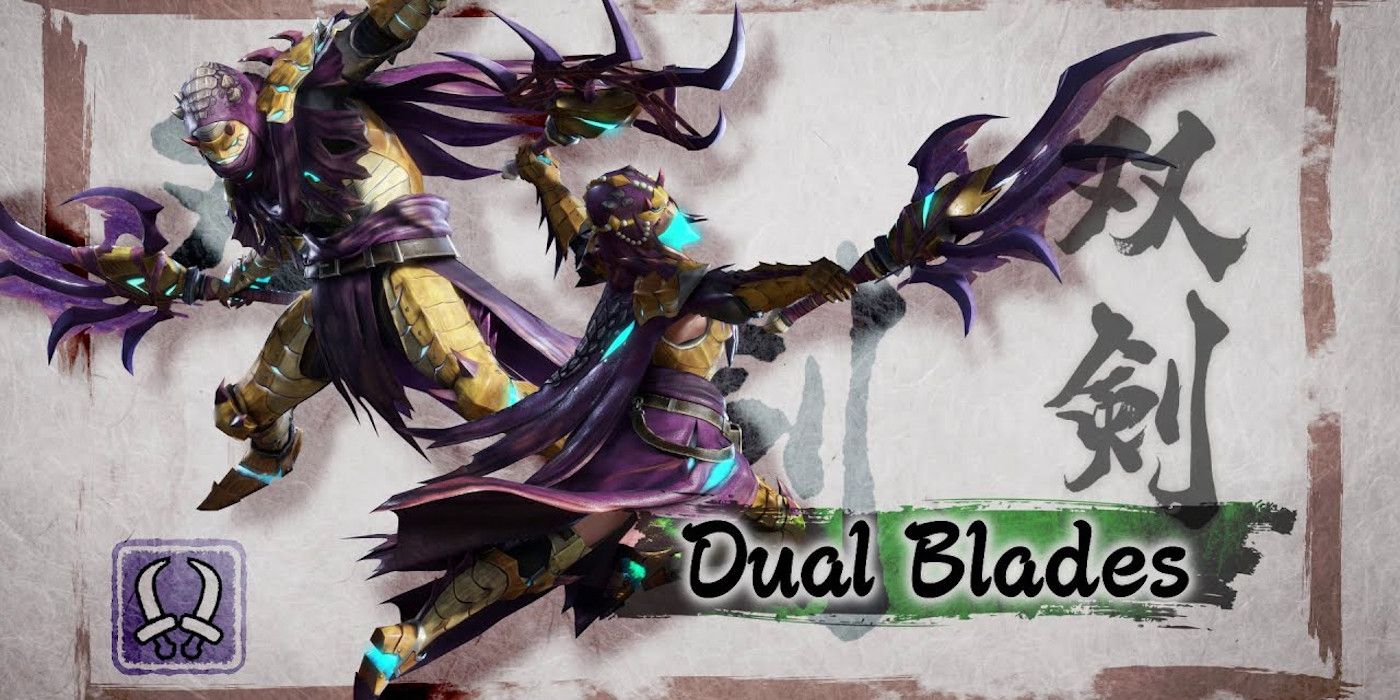 The Dual Blades are a fast-paced weapon that can fit into several different types of builds. Because of their high hit count, elemental and status-applying builds work the best, but raw-damage builds can be equally as strong with the right equipment and circumstances.

By pressing ZR, you will enter Demon Mode, draining stamina over time but increasing attack and movement speed, granting access to new combos and dodges. While in Demon Mode, your attacks will fill the Demon Gauge, which, when full, will put you into Archdemon Mode. While in this mode, your attacks and dodges will once again be enhanced, but using these techniques will deplete the Demon Gauge.

Managing your various resources is the core of the Dual Blades' gameplay. Through stamina, Demon Gauge, and sharpness, you'll need to keep a constant eye on what resources you have, and when to use them. To that end, stamina-boosting armor skills like Constitution or Marathon Runner will greatly increase the amount of time you are able to spend in Demon Mode. 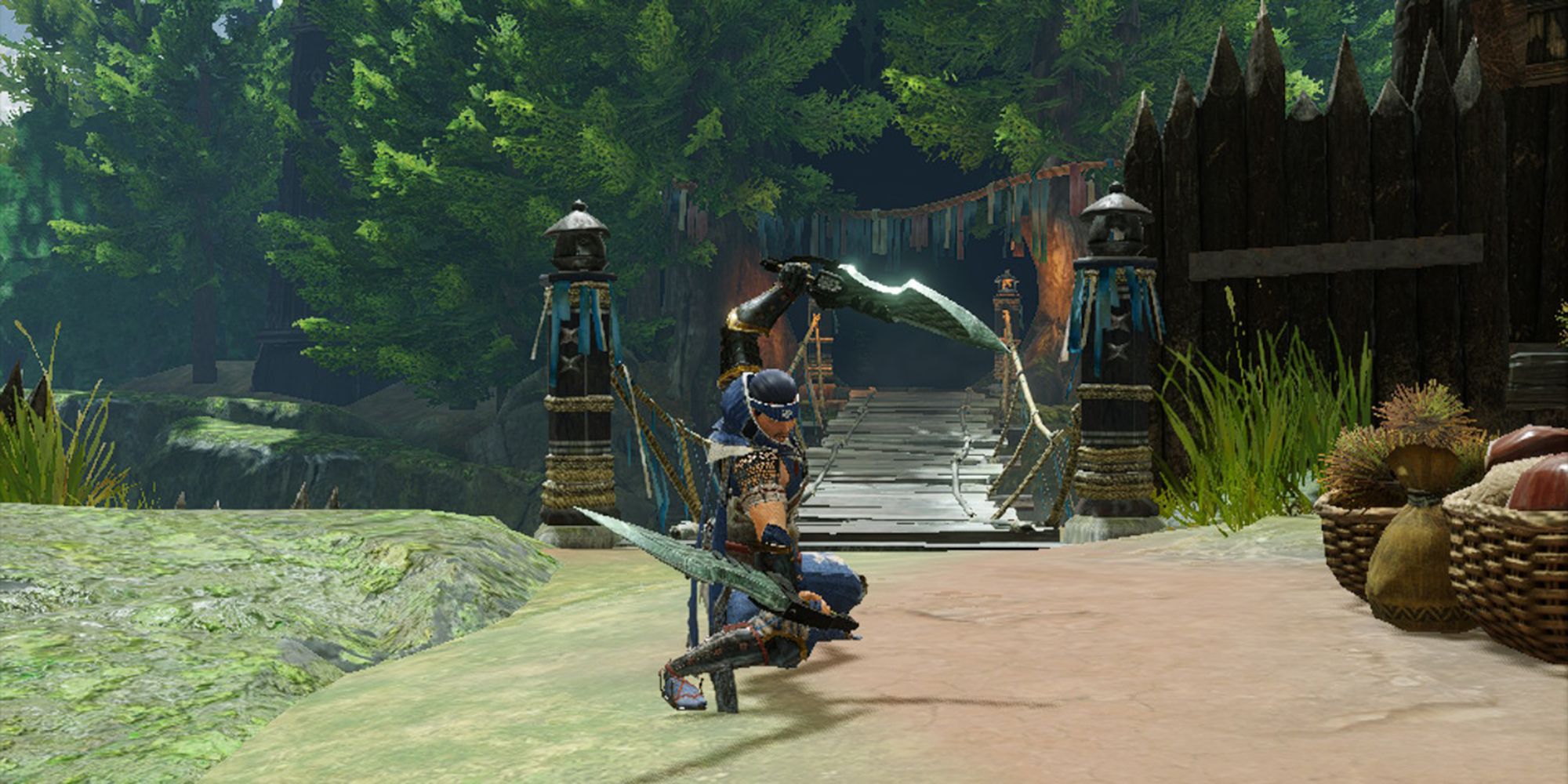 Piercing Bind (ZL + X): Stab a blade into the monster. Attacking the spot where the blade will deal additional damage before eventually exploding, dealing massive damage.

Spiral Slash (ZL + X): Launch into the air, spinning and attacking with both weapons. This attack can also be performed while in the air already.

Ironshine Silk (ZL + A): Cover your weapons in Wirebug Silk, restoring a bit of sharpness. While the Silk is active, dodging attacks will also restore some sharpness.

Demon Flurry Rush (A while in Demon Mode): Dash forward slightly while spinning around, attacking with the Dual Blades.

Demon Flight (A while in Demon Mode): Leap forward while slamming both weapons into the monster. If the attack connects, you will be vaulted upward, enabling aerial combos.

Side Slash Combo (Left Stick + X after an attack): Attack while dodging to the side, chaining into additional attacks. 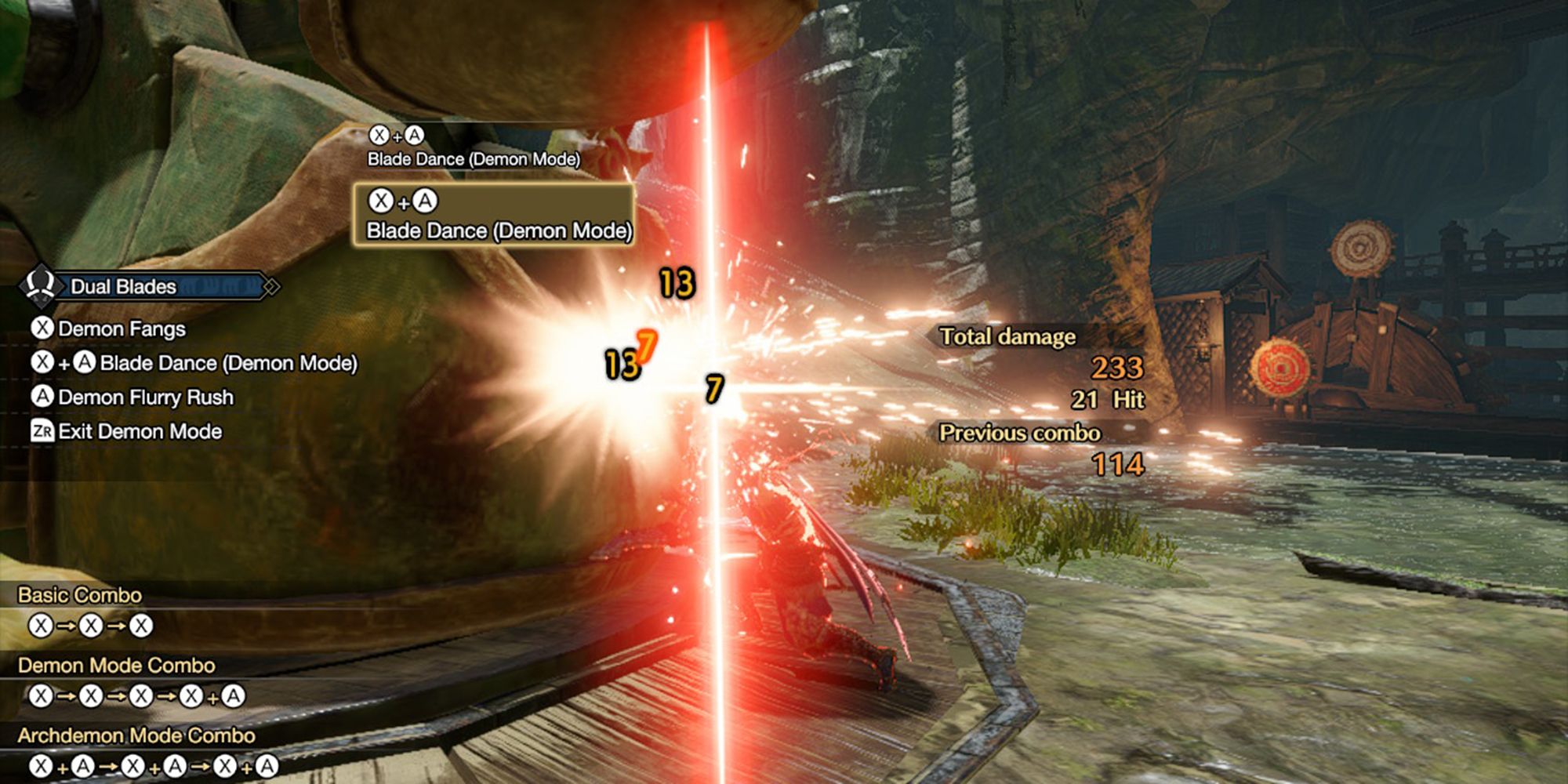 Using this combo, you can deal high damage to targets that are stunned or knocked down, utilizing the high hit count of Demon Mode attacks to quickly charge and explode the dagger from Piercing Bind. This combo also allows for repositioning using Demon Flurry Rush or dodging after Sixfold Demon Slash, letting you change positions or move out of the way if the monster is getting up.

The Dual Blades have access to several different combos that can be used while moving. In Feral Demon Mode, your dodge transforms into a moving attack, which can be paired with Demon Flurry Rush or other switch skills that allow for repositioning.

Ultimately, most of the Dual Blades' attacks allow for slight adjustments or dodges during the combo, meaning a mobile combo can almost always be performed. Use these attacks to move around the monster, targeting weak points or move out of the way of attacks.

The Dual Blades have a strong set of aerial attacks, including Midair Spinning Blade Dance (A while in the air and in Demon Mode), which has you spin along the back of the monster, repeatedly slashing before finishing by vaulting off.

There are many different methods to get into the air and above the monster, including the Silkbind Ability Tower Vault, or the Switch Skill Demon Flight.

Using aerial attacks can lead to Wyvern Riding, which will knock down the monster and enable further stationary or mobile ground combos. Additionally, vaulting over the monster can allow for faster repositioning or moving to weak points.

Each of the Dual Blades' Switch Skills brings something valuable to the fight, but knowing when to use each is the key to victory. Thanks to the Switch Skill Swap function added in Sunbreak, choosing which Switch Skills to bring became much easier.

In the first slot, all three Silkbind abilities are useful. Piercing Bind can enable high-damage combos on immobile targets, Tower Vault enables multiple aerial attacks and combos, and Spiral Slash can continue aerial attacks, but needs another way to get into the air. Because of this, Spiral Slash is best paired with the Switch Skill Demon Flight.

The Dual Blades' second slot Silkbind Abilities actually work the best together. Ironshine Silk will replenish your weapon's sharpness when you dodge an attack, and Shrouded Vault dodges attacks with a long invulnerability forward charge. Using these together, you can evade through a monster's attack while quickly restoring sharpness, allowing you to continue your assault instead of retreating to use a whetstone.

Unlike most other Blademaster weapons in Monster Hunter Rise, the Dual Blades are reliant on good stamina use to effectively enter Demon Mode. Because of this, items like Dash Juice are almost essential, as they allow you to stay in Demon Mode for much longer.

In addition, armor skills that slow stamina depletion like Marathon Runner and Constitution are very valuable.

Because of the Dual Blades' high number of dodges, armor skills that enhance these abilities like Evade Extender and Evade Window can be very helpful. Evading attacks easier will also help when using Ironshine Silk, as it will further reduce the need to pause your attack and use a whetstone.

As mentioned above, thanks to the high hit count of the Dual Blades attacks, the weapon excels in elemental and status-applying builds. Because of this, it's important to know the weakness of the monster you are up against and build your set accordingly. Tailoring your equipment to the elemental or status weakness of the monster will have you dealing much more damage than simply using a one-size-fits-all raw damage build.