Remember Typing of the Dead, the modded version of the arcade zombie game, House of the Dead? In case you don’t, here’s a brief summary: it’s a game where you snipe at lots of zombies not by aiming the barrel of a smoking gun towards their heads, but by typing phrases out with your keyboard—words like “bang bang”, “daffodil”, “ample buxom” and “lobsters are fancy crabs”—the moment they appear on screen. Mimicking the adrenaline rush of busting zombie heads with rifles, you’ll have to type these absurd phrases as quickly as possible to take them down, before the zombies wrap their rotting fingers around your neck. It’s a typing game taken to the extreme, in which your ability to smash your fingers as dexterously as a court stenographer will determine your survival.

Morse, which was recently featured at LudaNarraCon, reminds me a little of Typing of the Dead, minus the satirical elements and slathered with a generous layer of bureaucracy; it’s the sort of game that demands that you grind your soul down just a little each time. Set in World War I, you’re a telegraph operator named Ida. Your task is to transmit messages to British soldiers who were fending off German battalions, under the command of an Officer Sturch. How these messages are sent are done via morse code, which means that you’ll have your fingers on two buttons: one on the telegraph transmitter itself, and the other on the launch button—that is, the same button used to launch rockets that would sink battleships, wreck aeroplanes, and kill enemy soldiers.

After accepting your mission from Sturch, you’ll be taken to a simulation of the battlefield, presented via a grid, where you’ll need to spot the enemy—be it ships, planes or soldiers—creeping across the map, and outlined in red. You’ll then tap the right morse code to target these figures, and then smack the launch button to fire your rockets into that space. Say that you’ve just spotted a lone, red soldier trudging across the grid, landing on a square that’s labelled “2-H”; you’ll most likely need to tap in the morse code for “2” and “H”. That’s translated to two dots and three dashes for “2”, and four dots for “H”, but don’t worry—you’ll have a handy morse code chart to refer to at the side of the screen. It’s essentially about keying individual letters painstakingly with a single button, which is not unlike the frenzy of murdering zombies in Typing of the Dead, no? 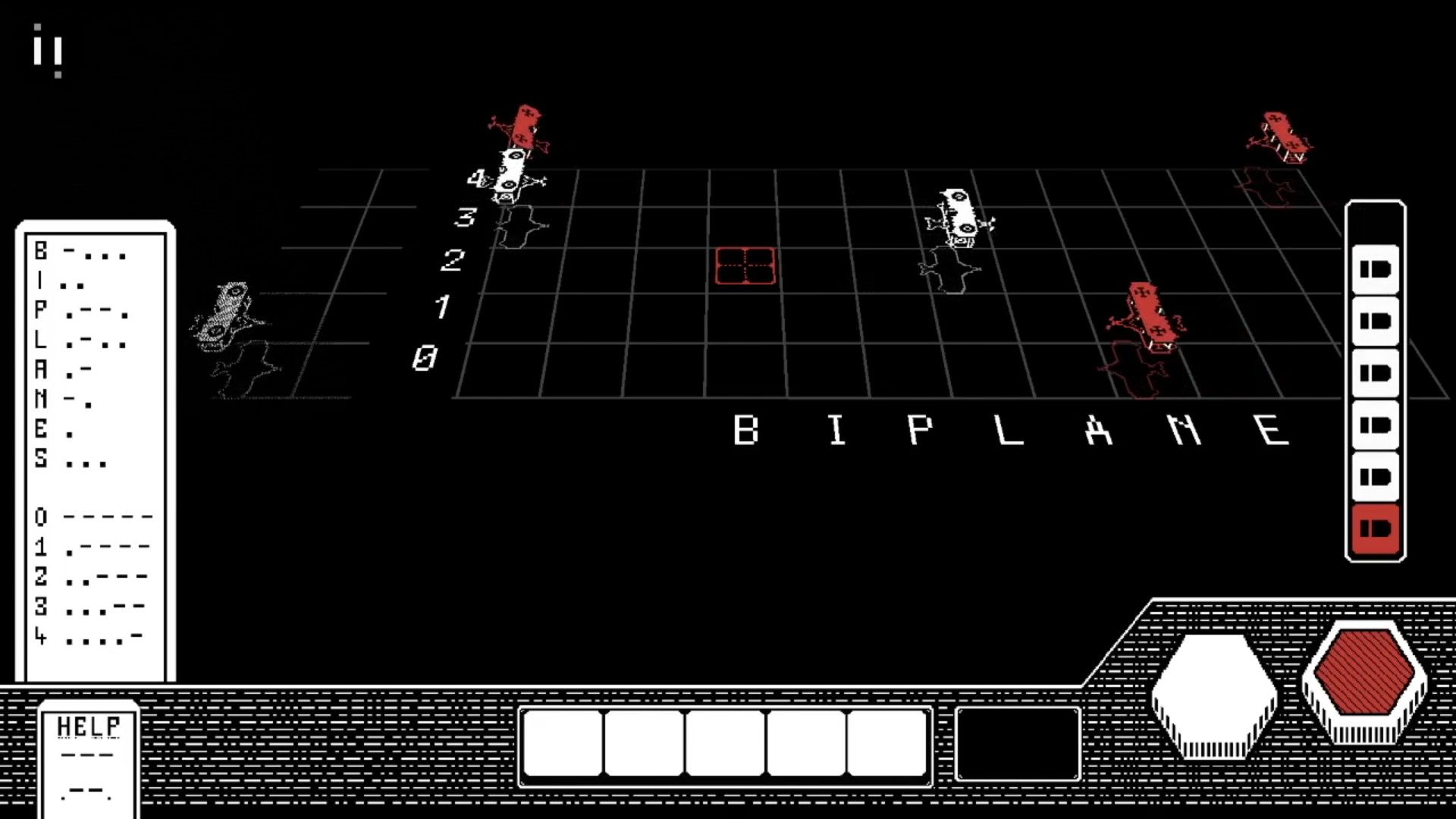 inWhat surprised me, however, is the slight tinge of guilt I felt while carrying these tasks out. In this vein, it’s a tad reminiscent of Papers, Please, in which you’re cast as an immigration officer working at the borders, and where people are reduced to figures holding genuine, counterfeit or incorrect passports. Similarly, you’re made to feel like a cog in Morse’s bureaucratic war machine, where victims in this seemingly bloodless war are reduced to red outlines and shapes on the grid. At first this job didn’t seem so bad; one of your first missions is to defend British soldiers against the onslaught of attacking German soldiers, and your conscience can probably be eased by a somewhat convenient excuse that your side is merely acting on the defensive. But in subsequent assignments, your responsibilities become a tad more morally ambiguous, like having to protect your rations against enemy civilians by shooting them down—excess rations that would have been discarded or eaten by rats because they can’t be delivered to the British soldiers in the first place.

But Morse doesn’t give you much time to ponder over these atrocities. You’ll be too busy playing at war anyway, with your eyes darting frantically between the morse code chart, the scurrying figures on the battlefield, and the grids they are on. You’ll have your hands full tapping the buttons on the device and trying to figure out what “L” corresponds to in morse code. Likewise, Ida would occasionally hesitate and ponder about the morality of her job as a wartime telegraph operator—is it really okay if someone dies while stealing food because they’re German and not British? But she still hasn’t let her guilt stop her, at least not in this Morse demo, as she dutifully carries out her assignments with aplomb. Perhaps to her, these aren’t human lives she’s ending, but outlines she’s erasing with every rocket launched in their direction.

You can try the demo out yourself on Steam here.