After experiencing Kratos’ powerful resurgence in 2018, fans of the 16-year-old action-adventure applauded the franchise’s swerve into Norse mythology. Departing from its Greek-infused roots, Kratos’ journey to Midgard in the 2018 hit carries some ambiguity and a new God of War comic series has been designed to offer some answers.

Courtesy of Dark Horse Comics, the new series God of War: Fallen God will fill in the gaps of Kratos’ journey from Greece to Midgard. Canonically a prequel to 2018’s God of War, Fallen God picks up after God of War 3’s ending and depicts another strenuous ordeal for the Ghost of Sparta. In addition to providing the intriguing details of his voyage, the comic series may introduce Egyptian gods into its narrative as well – based on the first issue’s content which relates to material from the 2018 title.

Issue one of Fallen God pits Kratos against the sands of Egypt, as he attempts to leave his past behind with his homeland. Kratos’ desperate attempt to escape the clutches of the cursed Blades of Chaos brings him to Egypt, where his mind is already deteriorating due to the weapons’ power. During his time in the ancient city, Kratos is approached by mysterious figures including an old man, a primate, and a bird, all of which pass on enigmatic messages to Kratos about his future. It is believed that these figures are of Egyptian descent, perhaps even deities in disguise. 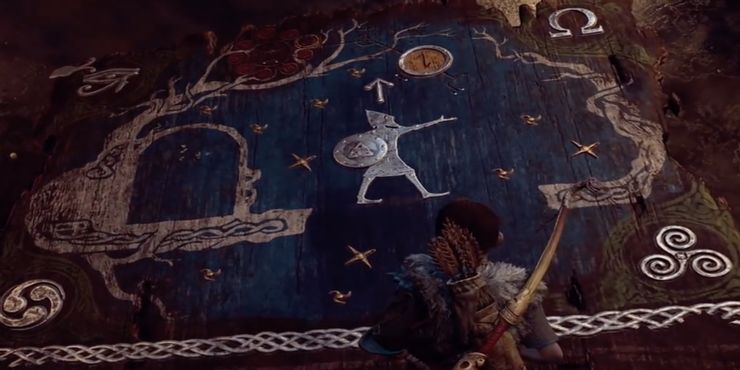 Fallen God’s introduction to Kratos in Egypt also ties in with past references from the 2018 game. Kratos and Atreus once stumbled upon ancient runes and symbols upon a tapestry, belonging to Greek and Egyptian lore. In a previous scene, both father and son discover a room filled with Egyptian treasure and Mimir elaborates on its origins. “That’s from a great desert land very far from here,” the talking head stated and Atreus then asked if gods lived there, to which Mimir replied “Many, many gods.”

If Kratos’ testing journey in Egypt has piqued your interest then take a look at our in-depth recap of what happened within the pages of issue one. The four-part comic series has presented a strong opening and the promise of Egyptian gods crossing paths with the Ghost of Sparta is an exciting premise to hope for.