Nightmare Reaper is crafted in the crimson, pulpy mould of ‘90s FPSes Doom and Quake, complete with rapid player movement, non-stop stabbing and gunning, and oodles of blood and guts in bouts of all-out battles against hellspawns and undead monsters. It’s also said to be a mix of these retro shooters, as well as roguelike elements that will breach “the wall between classic and modern gameplay”. Like the sum of its influences, the game is wafer-thin on story, and heavy on satanic theatrics and violence. Even the snarling face sprite of its gunslinging heroine is a throwback to the the classic Doomguy status bar; sustain just a little damage and the face only suffers from a minor nosebleed, but get way too injured, and the same face will be haemorrhaging litres of blood from her forehead. You know the drill.

With such a presentation, there’s already some level of familiarity, perhaps even polish, that you would expect from a game like this, but Nightmare Reaper never quite surpasses this precedent set by the legions of Doom clones that have been created over the years. Nightmare Reaper wastes very little time when it comes to dousing you right into the midst of murder: you begin by materialising from a bloody pentacle with very little fanfare—just simply plonked into the level with no context. You’re given a knife too, and instinctively you know what you must do: stab someone with it. You venture out into the mouldy dungeon, spot some shambling corpses, sink your knife into them, and watch as they explode into a fountain of pixelated gore and viscera. Then you sprint around the room in search of more flesh, more guns, and more doors to raise your body count. This is the sort of rhythm you would expect throughout Nightmare Reaper: there’s nothing more to it other than buckets after buckets of bloodshed.

The twist that Nightmare Reaper offers, however, is this: you won’t just be wielding guns and chainsaws, but also magical staffs, destructive tombs, and a dizzying array of melee weapons. Again, the whole point is to smash things till they are liquified into mush, and there’s a perverse joy in being able to do so with an expansive arsenal of weapons. At the same time, Nightmare Reaper also borrows a page from the newest iterations of Doom: encouraging players to keep up this momentum by dropping life vials out of these animated corpses when eviscerated. There are definitely some thrilling moments, fuelled by sheer desperation, when you only have a slither of life left and your only chance at continued survival is to wade into the thick of danger once more, in hopes that more vials will erupt from these carcasses. But the difference is that these murders feel devoid of any actual punch; there’s just very little crunch to these turbocharged kills. 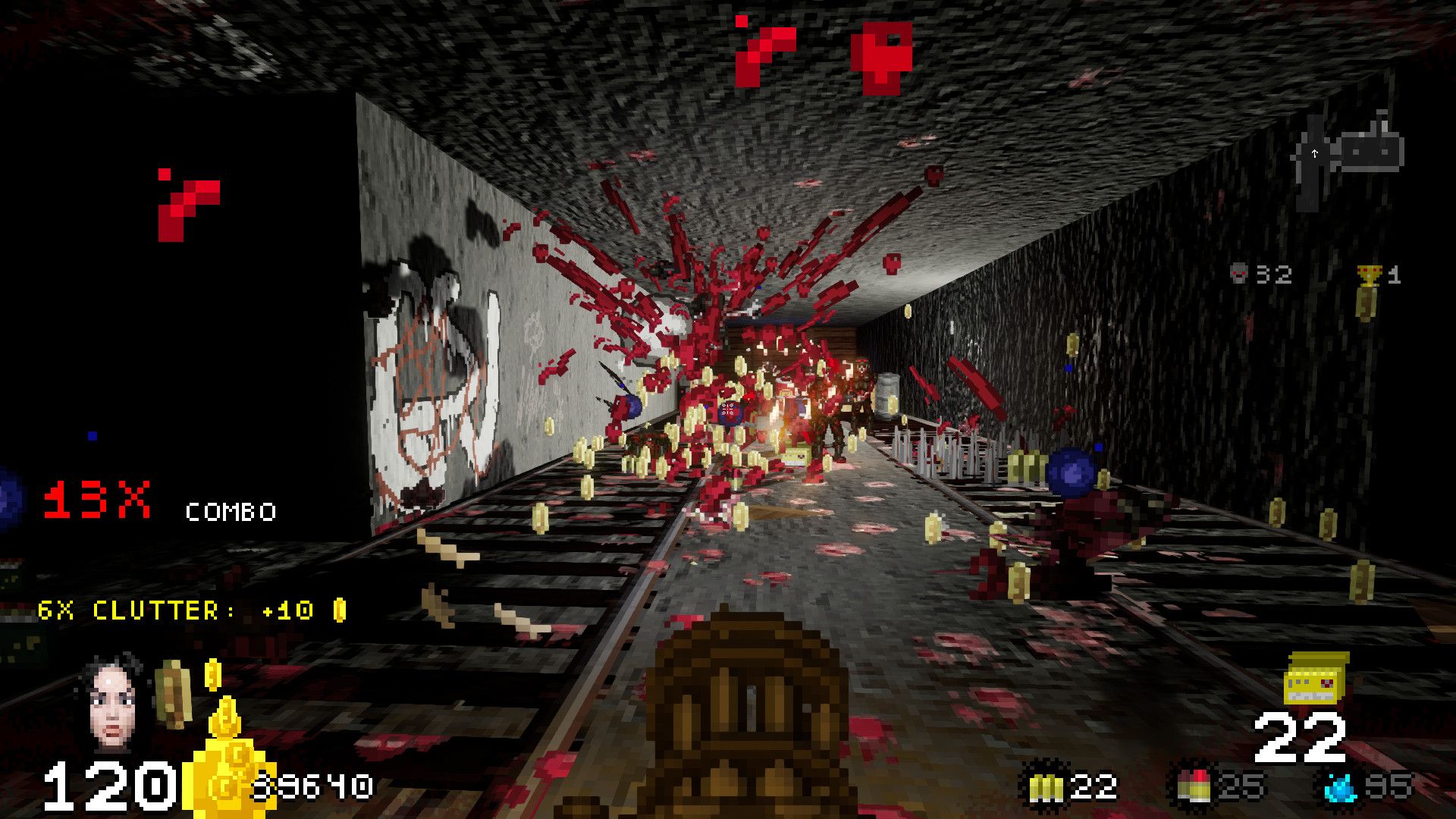 It’s not that Nightmare Reaper doesn’t try to shake up the Doom formula; it does, and it seems to try very hard, but these additions feel rather cosmetic. Take levelling up your supersoldier, for instance, which requires you to play a mini-game that’s reminiscent of Mario, which… let me explain. Your games menu can be, well, accessed on an in-game Game Boy Advance SP, and among these is an option to level up your hero. Doing so means walking your in-in-game avatar, inside the Game Boy Advance SP console, within a map, selecting a level-up perk such as increasing your starting health by 20%, and then playing said Mario mini-game where you can collect coins, kill zombies by jumping on their heads, and getting to the door at the end of the level.

To be fair, Nightmare Reaper isn’t necessarily a badly made game; it has moments of exhilaration that make its murder fest particularly hard-hitting. If anything, its biggest flaws are its lack of imagination and flair. The game hews very closely to the frenetic Doom formula without understanding its spirit of recklessness, and it’s a shame that it doesn’t feel like there’s anything more to see beyond a few levels. Perhaps the most curious aspect about Nightmare Reaper is the short reprieve you get in between levels of heavy metal slaughtering, in which the heroine will find herself in a seemingly abandoned hospital room. Apparently all the murdering are imagined, and she’s just suffering from a very bad case of psychosis. But that’s really… all there is to it. Nightmare Reaper barely rises to the thematic, even if threadbare, story of Doom—the one game it is most enamoured by. Even as the mazes spiral towards increasing complexity in the later stages, it’s still more of the same, always more of the same. Nightmare Reaper is just stuck in a limbo that it can’t get out of, its version of hell as aimless as simply staring into the fleshy, gaping maw of Baphomet itself.