The Shivering Isles expansion pack for Elder Scrolls 4: Oblivion was the DLC expansion pack that changed the game. You get a whole new world enriched with fully developed characters and interesting lore that allows you to delve into the secrets of one of the Daedric princes of madness himself.

Along with the large mound of new and original quests, characters, and maps, comes loot.  By playing through this expansion, which is already included in the Game Of The Year edition, you can find unique armor sets, weapons, and spells to help you close all those Oblivion gates of hell. 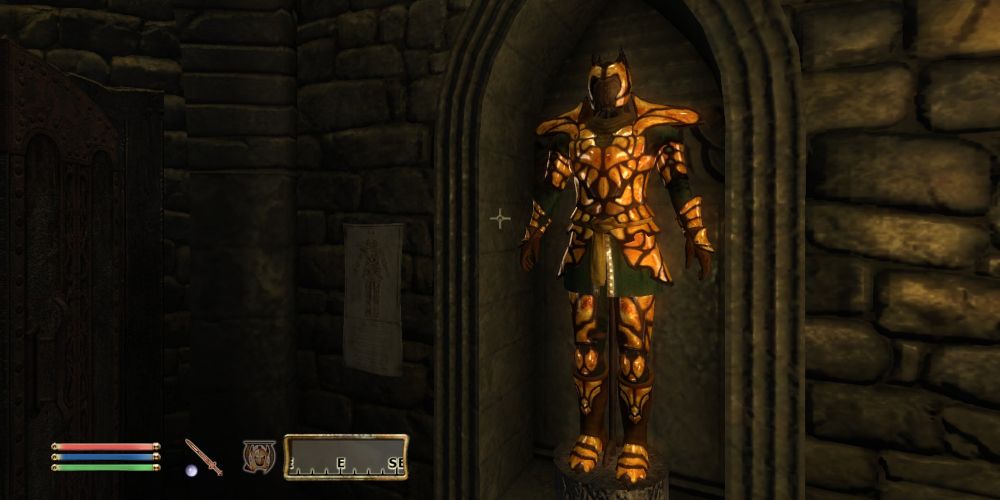 This newfound world of New Sheoth is cut off into two sections. Mania and Dementia, the two sides to madness. Because of this, there are also two different towns dedicated to each side. The mania-driven people of Bliss usually use amber ore for their helmets and axes while the dementia-driven people of Crucible use madness ore. These are the sets each side offers.

Where To Find Amber Ore and Madness Ore

Amber and Madness Ore is not easy to grind because it randomly spawns in the dungeons and caves of New Sheoth, and rarely in a large amount. You also can’t use console commands to add these items to your inventory. This makes it more of a task, so you’ll want to collect a lot of these materials when you’re out dungeon crawling for other quests.

Amber ore is found looted within underground caves that have glowing plants all over them while madness ore is found growing out of the cement floors of broken, stone dungeons. In New Sheoth, sparkling lights guide your way to loot sometimes. Follow them if you’re keen.

8 The Ability To Summon Haskill 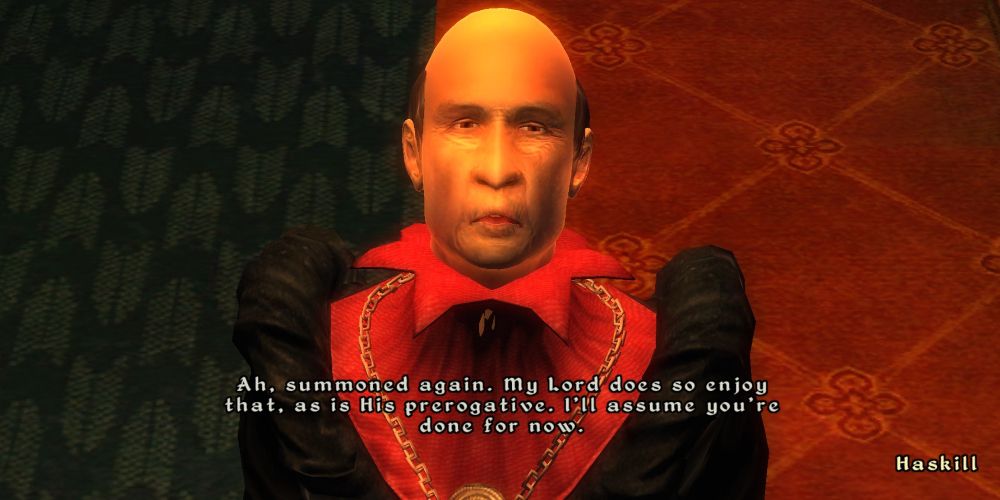 Haskill is the first person you meet when you enter the Strange Door to New Sheoth. He is Daedric Prince Sheogorath’s right-hand man. Or assistant. Or something. Haskill has that tired-and-annoyed butler personality that makes him so charming.

Once you do a certain amount of quests for Sheogorath, he gives you the ability to summon Haskill and even encourages you to abuse it. Much to Haskill’s delight, of course.

Oblivion is full of humor on its own, but the Shivering Isles holds comedic characters, unlike others before. The ability to summon one of these characters is sure to put a smile on your face. He also gives you hints if you’re stuck on a quest, but we love him for more than that.

Note: Haskill cannot be summoned outside of the Shivering Isles realm.

7 The Great Sword Of Jyggalag 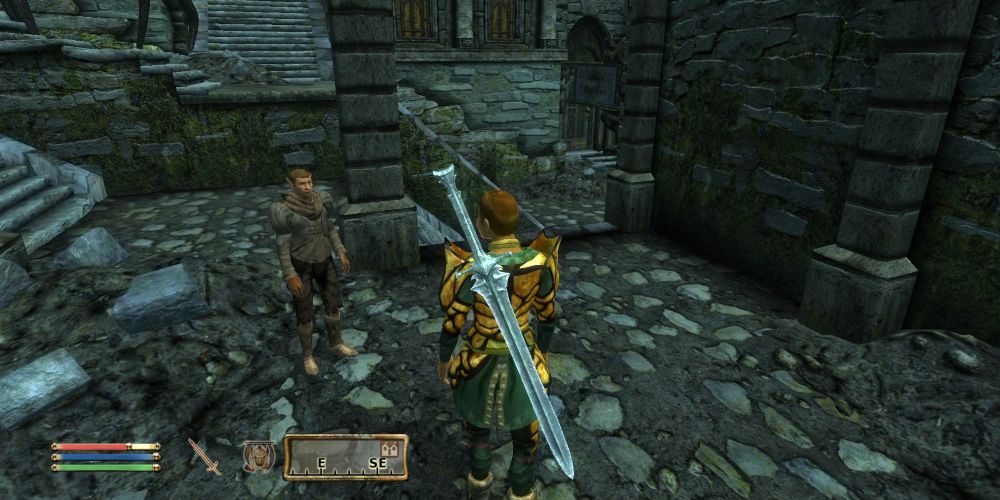 All your preparing and grinding throughout New Sheoth is for one reason and one reason only. The great and dangerous Jyggalag must be stopped. Being that this is a video game and you’re the main character, you do indeed defeat him and come out the other side with some great loot.

One of those prizes for defeating him is this great claymore. It’s two-handed, with a total value in coin of 500-4200, depending on your character level. It has a damage of 14-24 and looks pretty rad on your back. 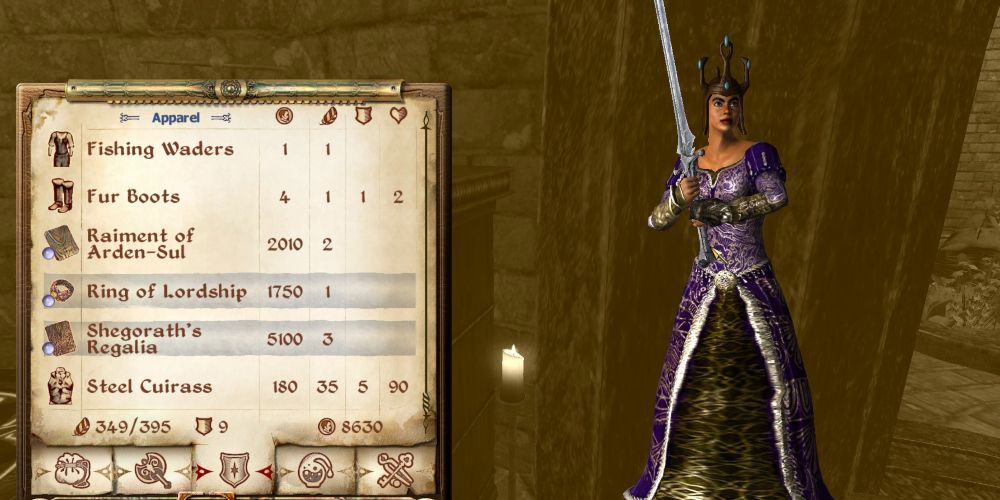 After absolutely everything is done within the Shivering Isles, you’ll come out with some cool stuff from the main questline and Sheogorath himself. From the clothes on his back to the staff in his hands. Here’s what you can find.

From all the quests you’ll have received multiple fancy outfits that have multiple fortifying buffs attached to them for Personality, Speechcraft, Intelligence, and more.

You’ll also get a ring for siding with either Mania or Dementia called Ring Of Lordship. This gives you poison resistance, Chameleon power, and endurance points. The Staff Of Sheogorath must be crafted within New Sheoth and by the power of Sheogorath’s voice, freezes all enemies in place for a certain amount of time. 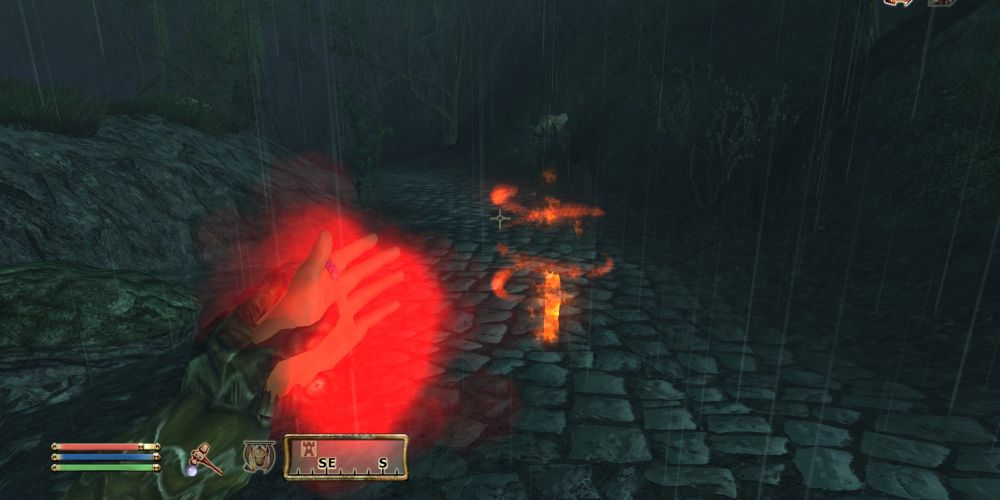 All of Sheogorath’s power goes to you at the end of your journey in the Shivering Isles. This includes the ability to summon both a Golden Saint of Mania and a Dark Seducer of Dementia to fight by your side.

You’ll also be able to gain the following abilities:

Sheogorath’s Protection allows you to be teleported to the New Sheoth Palace grounds within Shivering Isles. At the palace, you can use the Court Healer to heal your health bar, and dear and beloved Haskill can teleport you back to your location. 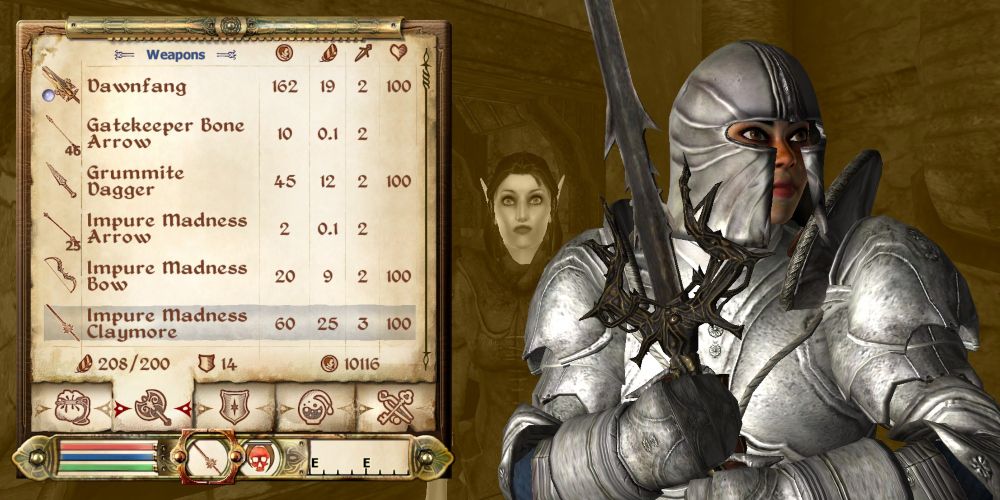 Where you can pay to receive Amber and Madness armor in both Bliss and Crucible, you can also get weapons. Of both, you can receive bows, arrows, swords, an axe, hammer, and mace for the right amount of money and ore.

Madness weapons are bow and arrows, a claymore, a normal sword, and an axe. To get all of the above you need 12 pieces of Madness Ore.

Amber weapons are a bow and arrow, a sword, mace, and hammer. To get all of the Amber weapons you also need 12 pieces of Amber ore.

3 Armor And Weapons Of Order 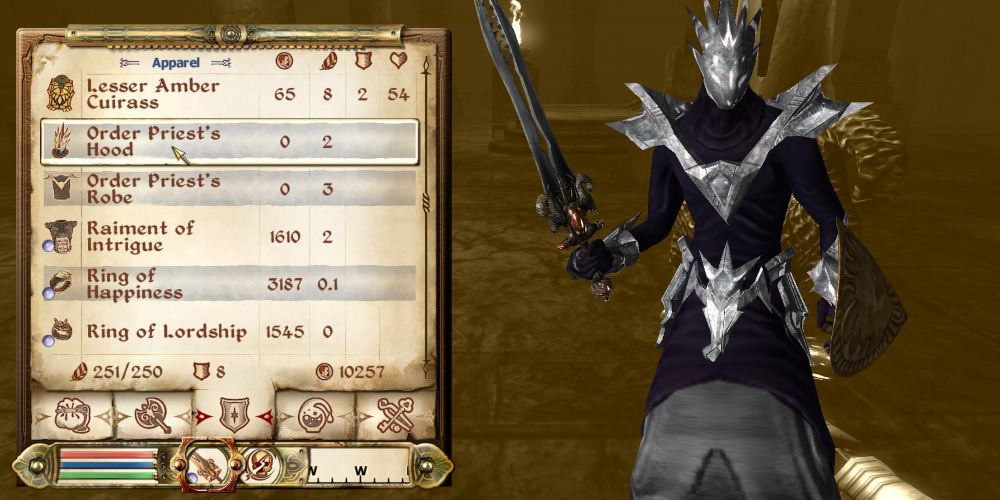 The Order is the great and menacing threat New Sheoth faces at the end of every era and is the reason lord Sheogorath wants you to help out.

Throughout the quests in Shivering Isles you’ll eventually run into these Knights Of Order. Normal knights only drop their cool-looking Order swords that can have up to 23 damage if in perfect condition. Only the Priests Of Order drop their armor for use. 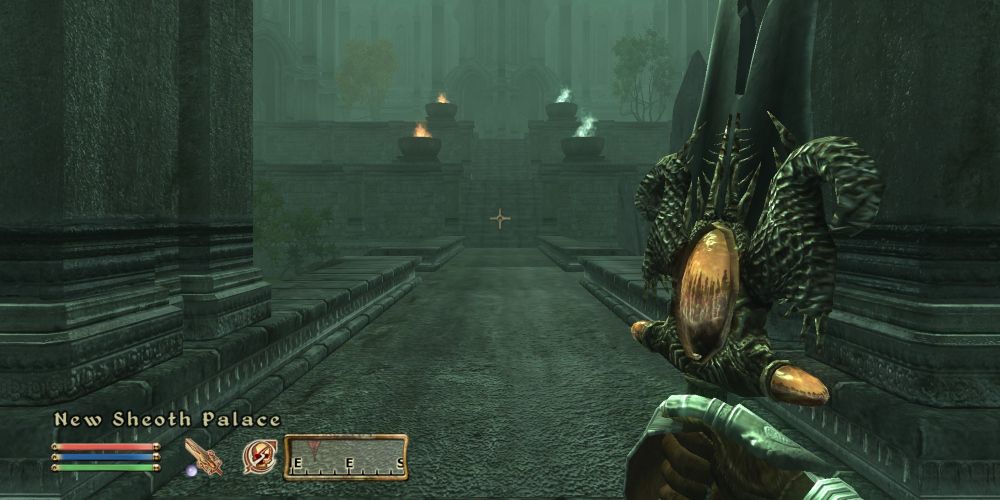 This is the most cherished weapon in the expansion that most people fight to get. This sword changes form as the sun rises and falls. During the day it’s known as Dawnfang and has an amber-colored gem. At night you’ll get the notification that Dawnfang has been removed and Duskfang is now equipped, which visually has a violet gem.

It’s a magical weapon that needs to be charged to work effectively, and if you miss your killing streak then everything will revert back to normal. This sword can be very powerful, but if you’re no killing machine you may have to keep track and pull some strings so that the sword is at its fullest potential.

You can get this sword from completing the quest Baiting The Trap located within Xedilian. You get this quest early on and the sword is looted off a dead body and given to you. You can also retrieve the notes from the warrior who owned it, explaining the use of the weapon. 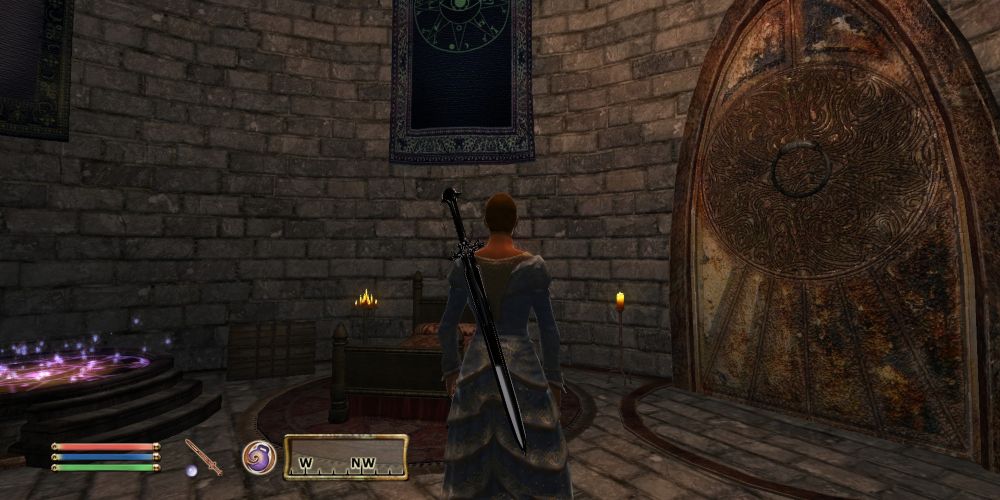 Shadowrend is a magical and deadly-looking sword that literally looks like the shadow of a weapon. It can be found from the later Shivering Isles’ main quests called the Symbols Of Office. You have to fight a shadow of yourself to get it, which uses your own tricks against you.

The Shadowrend will either be a blade or an axe, with the same ability to apply Damage Health and Weakness To Magic with damage of up to 28.

Next: Elder Scrolls Oblivion: 10 Easter Eggs You Might Have Missed The First Time Through 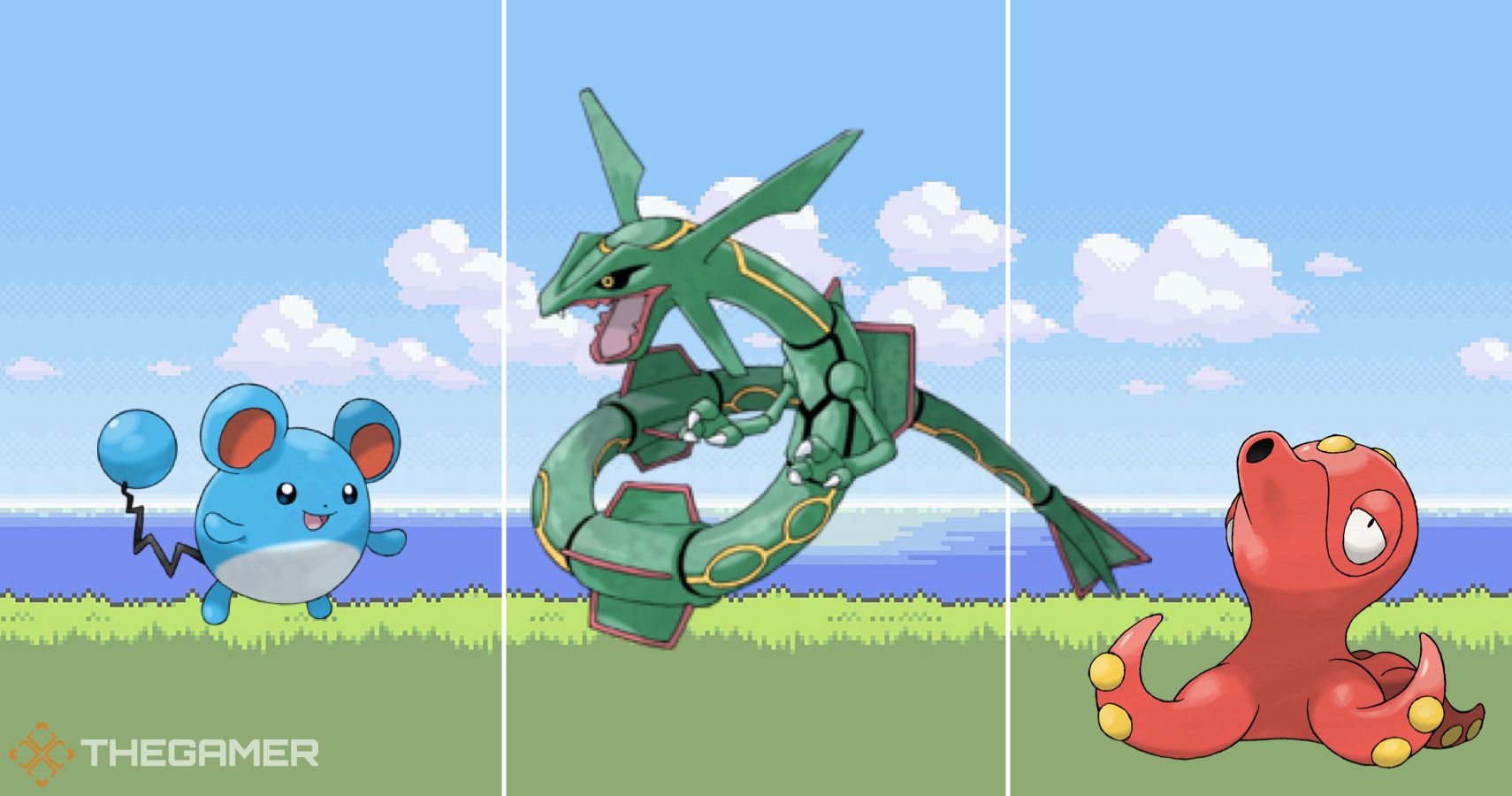