Dedication is the first quest tied to the First City in Outriders. While short, this quest has a ton of enemies to farm and chests to find. This is when the game starts to throw loot at you, so be prepared to swap out your items frequently.

This is one of two quests tied to unlocking Outriders’ crafting system, the other being Salvation—the quest after this one. Keep an eye out for item drops and ore veins during this quest, as you’ll want as many resources as possible for when you complete the Salvation quest. It’s time to head into the First City and rescue Dr. Zahedi.

Search The First City For Zahedi 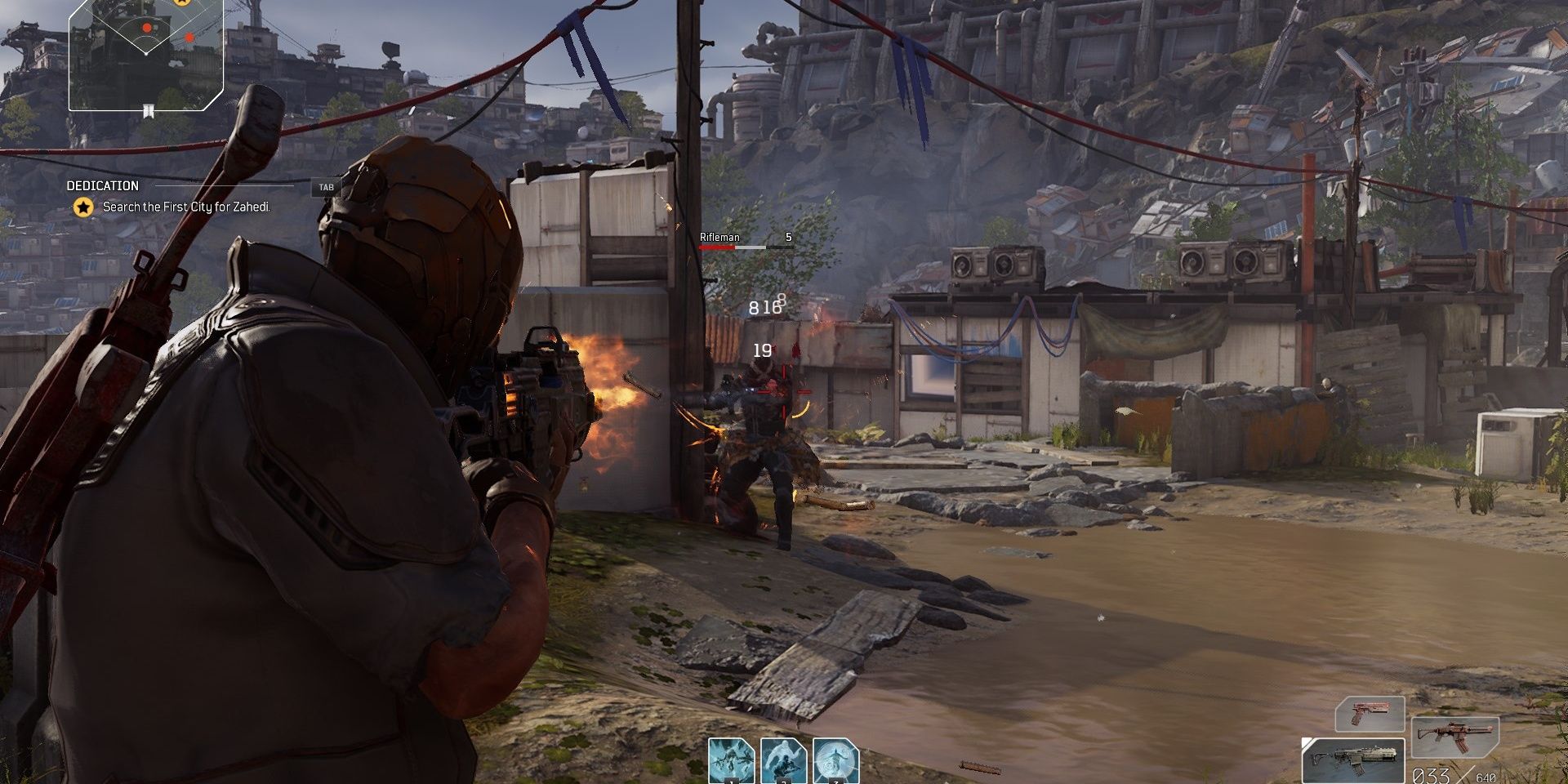 When you arrive at the First City, run straight ahead and follow the path. You’ll come across a shanty town with multiple Insurgents. Most of these enemies are Rifleman fodder, although a few Breachers are present. Shoot the helmet off a Breacher to deal critical damage.

Tip: Breachers always drop a grenade when they die. If you kill one in close range, back up to prevent taking unnecessary damage. 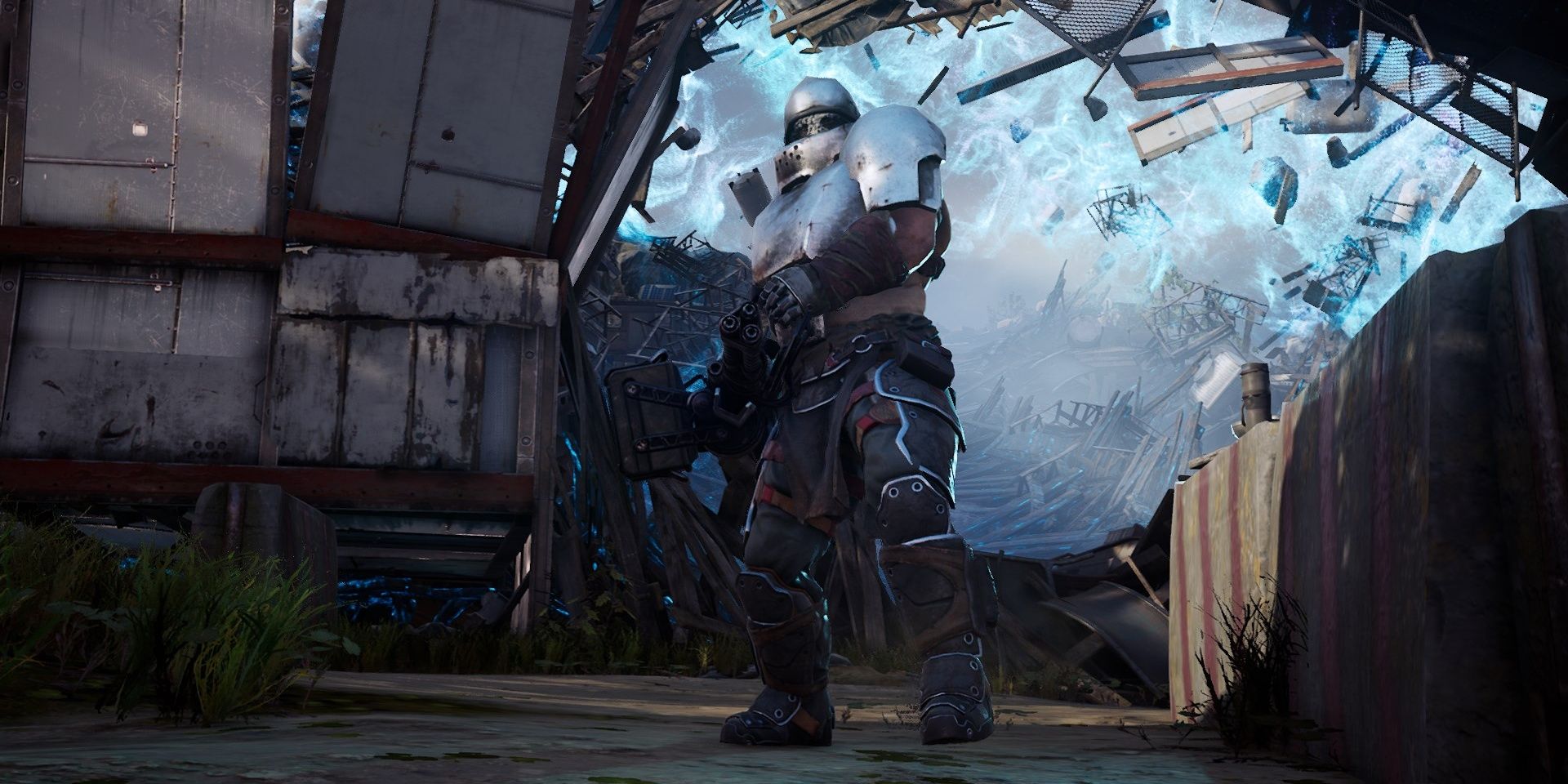 A minigun-wielding Elite enemy will appear after you’ve thinned the heard. These enemies are named Ironclads, and they have a rather large health pool and thick armor plating. Close the gap and use a melee attack to strip most of their armor, making it much easier to land headshots. They also tend to slam the ground if you get too close. Retaliate with a melee attack of your own to stun them. 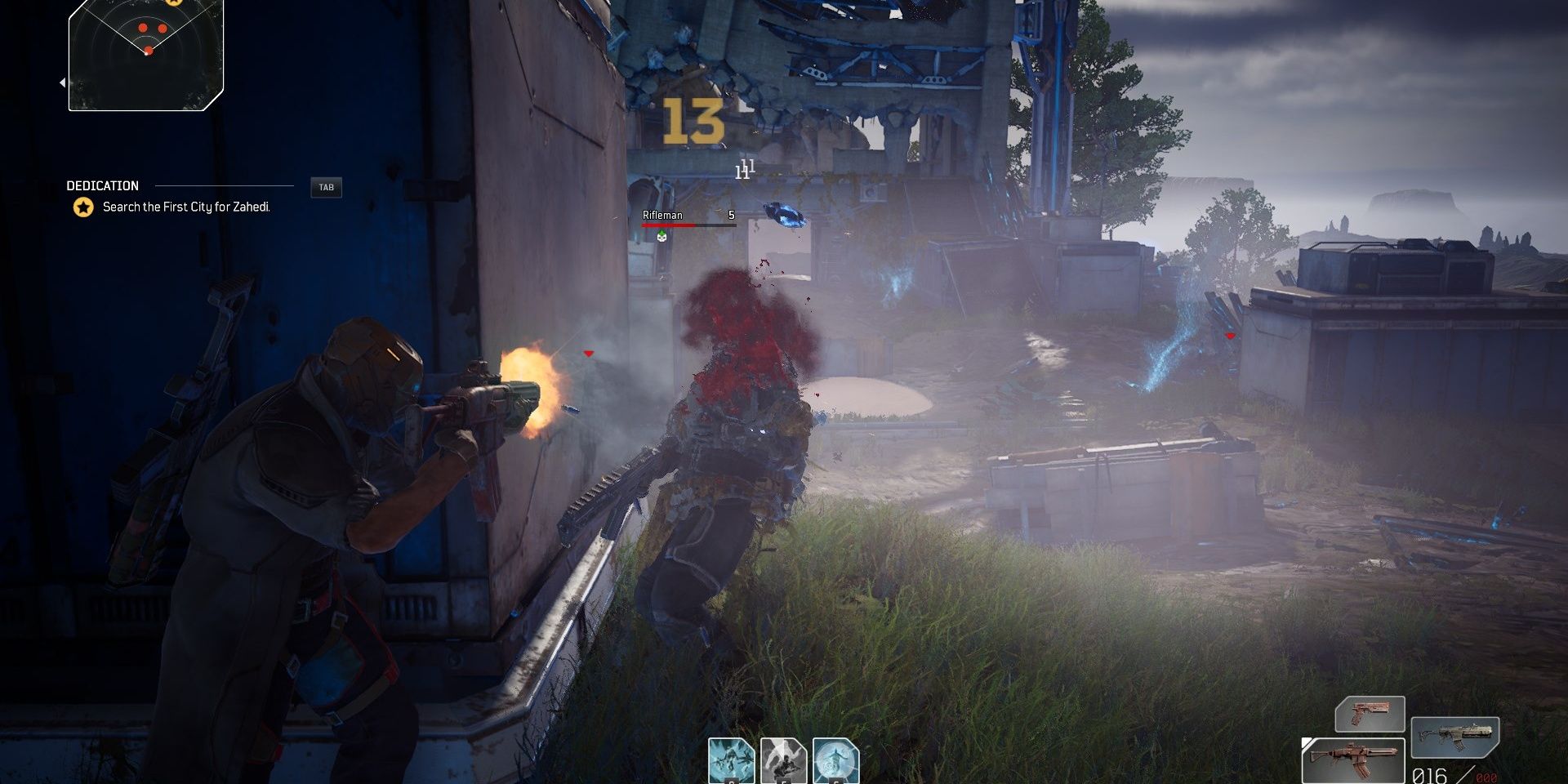 Past an anomaly-infused path will be yet another combat arena. A large number of Rifleman and Cutthroats will rush your position. Use your abilities and melee attack to deal with the Cutthroats. If needed, you can take cover behind the power box outside. 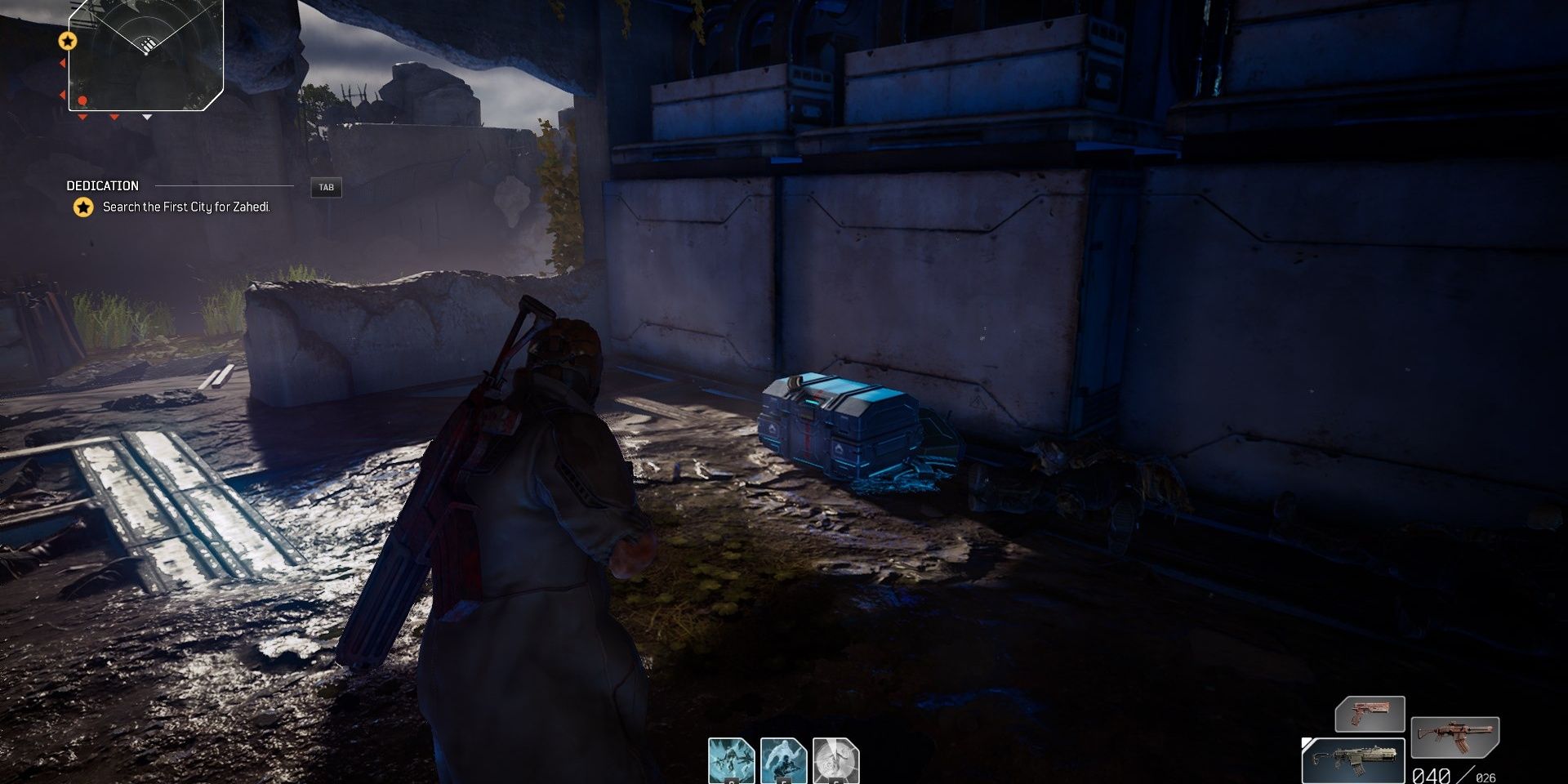 Push into the building to restock your ammo. The other side of the building will have plenty of Breachers and a Captain miniboss. If you aren’t strong enough to facetank the enemies, consider fighting near the building to protect yourself from the onslaught of bullets. 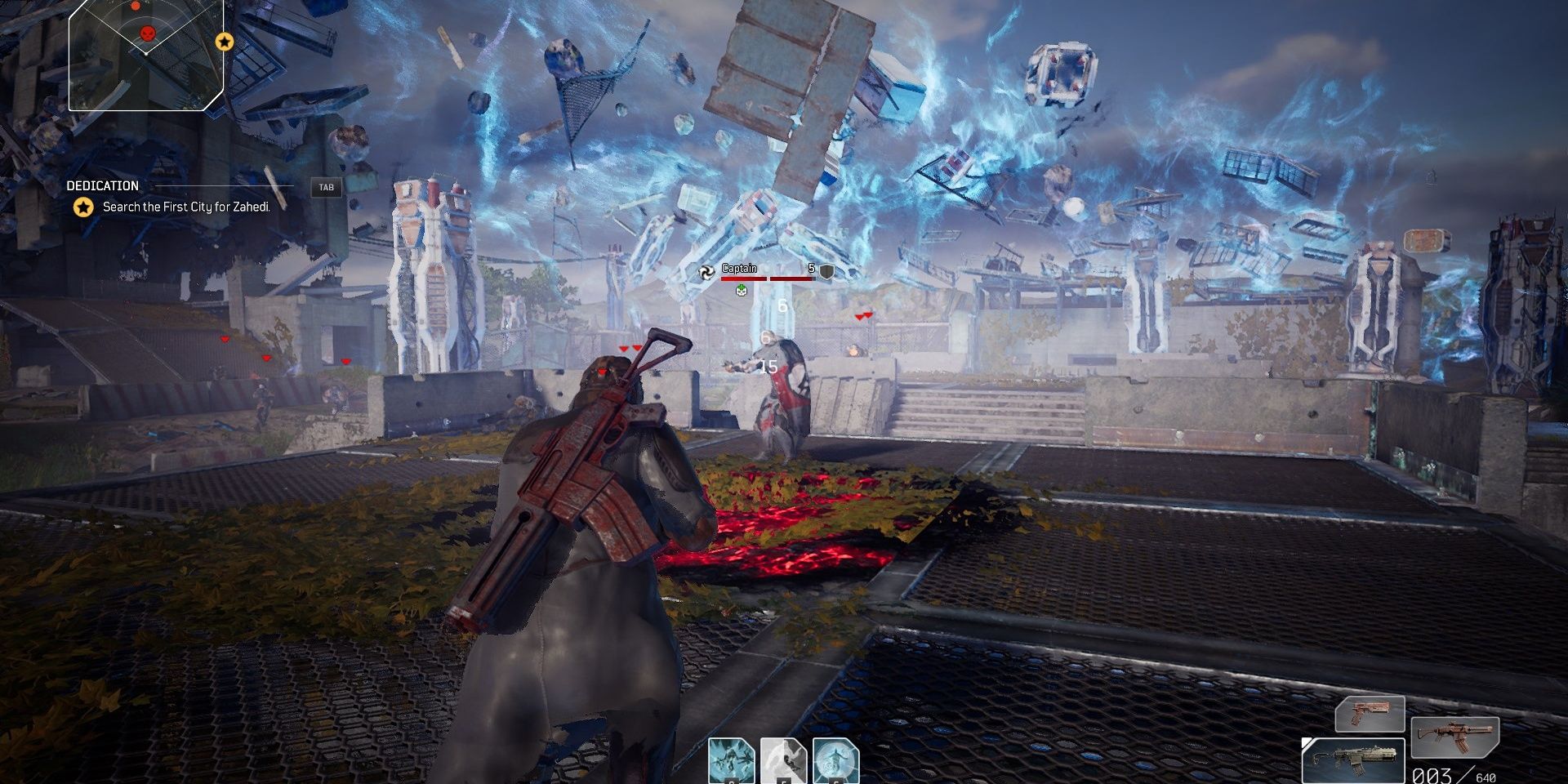 The Captain will summon a barrage of anomaly projectiles when you first fight him. Either close the gap and melee him or stay in the building. Focus on the Captain first, using any mid to long-range weapons to take him out.

From there, multiple Breachers will converge on your location. Use any abilities to stun or kill them. Clean up the remaining Insurgents, then push through the gate to continue. 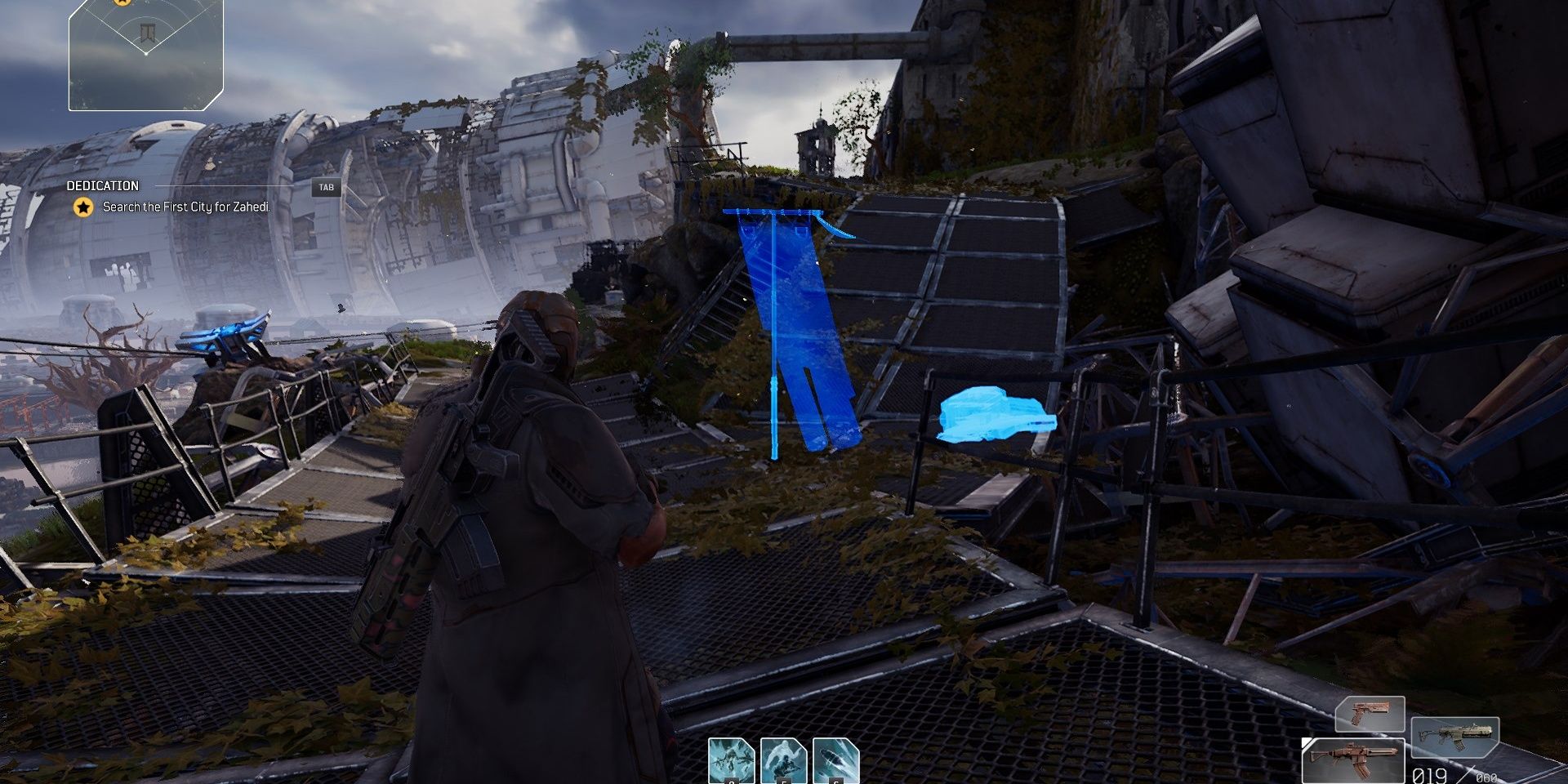 Make your way to the hologram to plant a flag, allowing you to restock your ammo. Equip any new items you’ve obtained, as the next few encounters are tough. 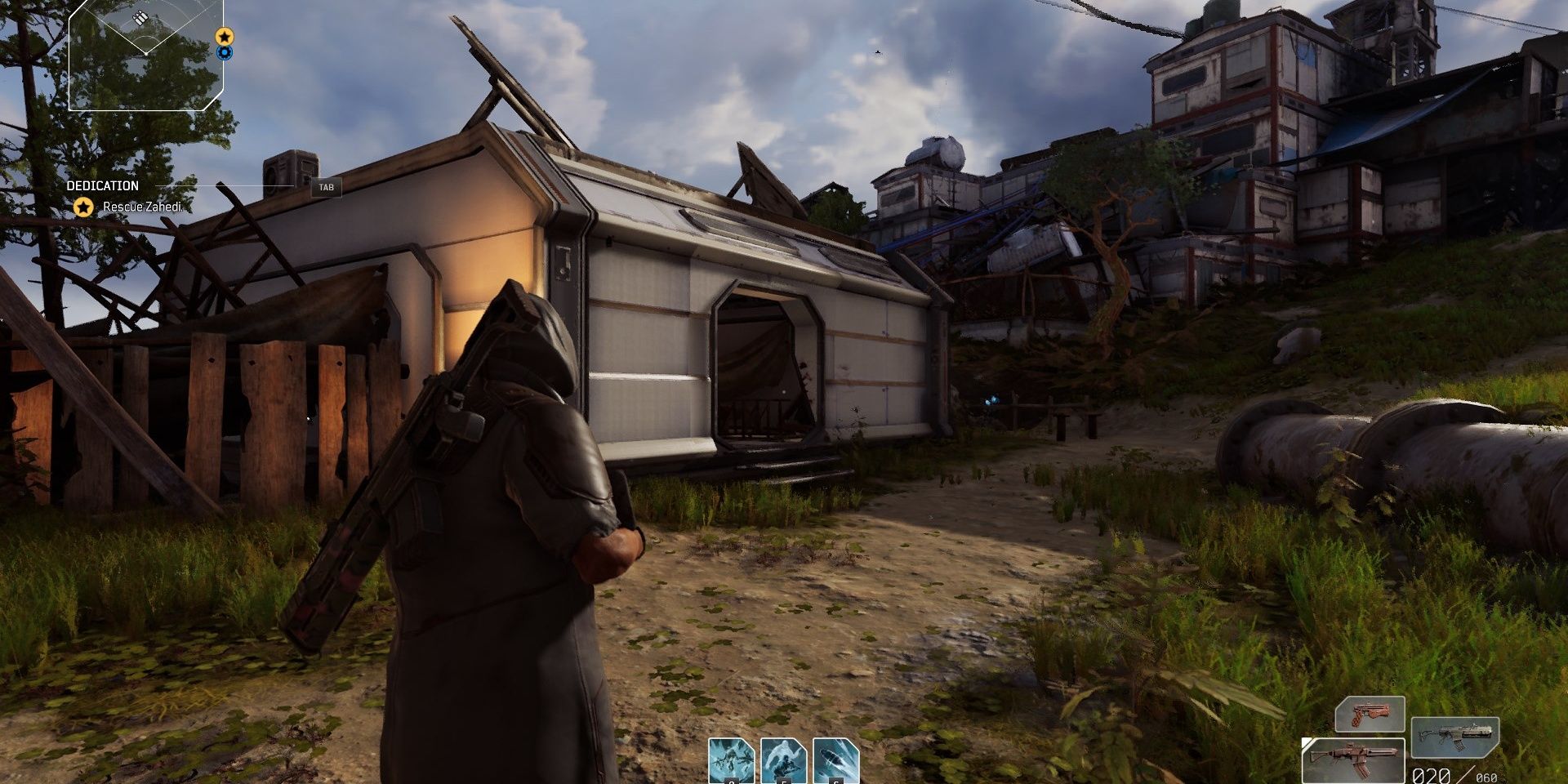 Just before the next combat encounter, enter the white building to the left of the path to find a chest resting on a balcony. 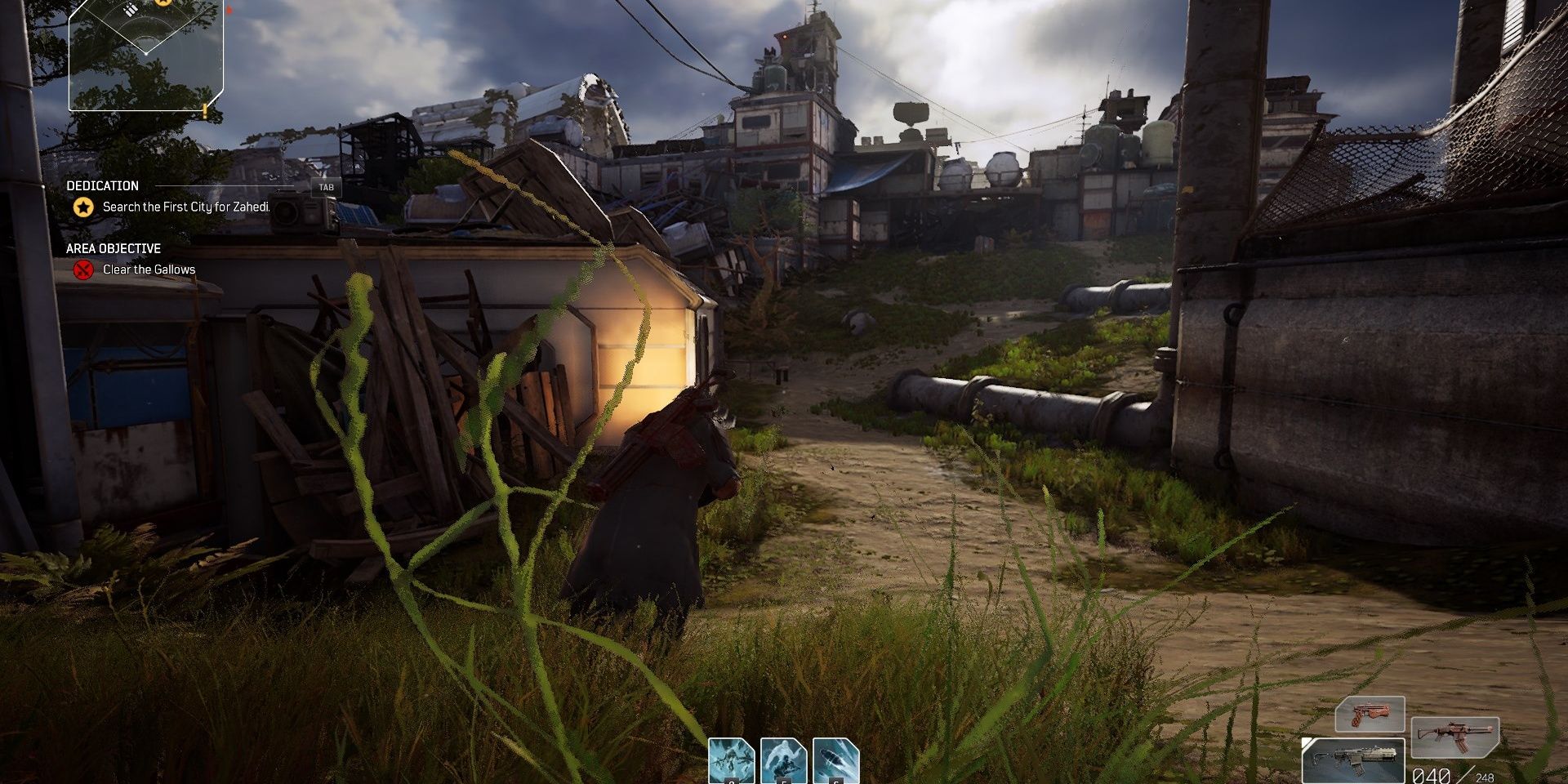 Follow the dirt path to the left of the flag to reach the slum outskirts. Multiple Insurgents have executed the locals. Don’t worry, as the most deadly enemy here is a Marksman atop a wooden platform. 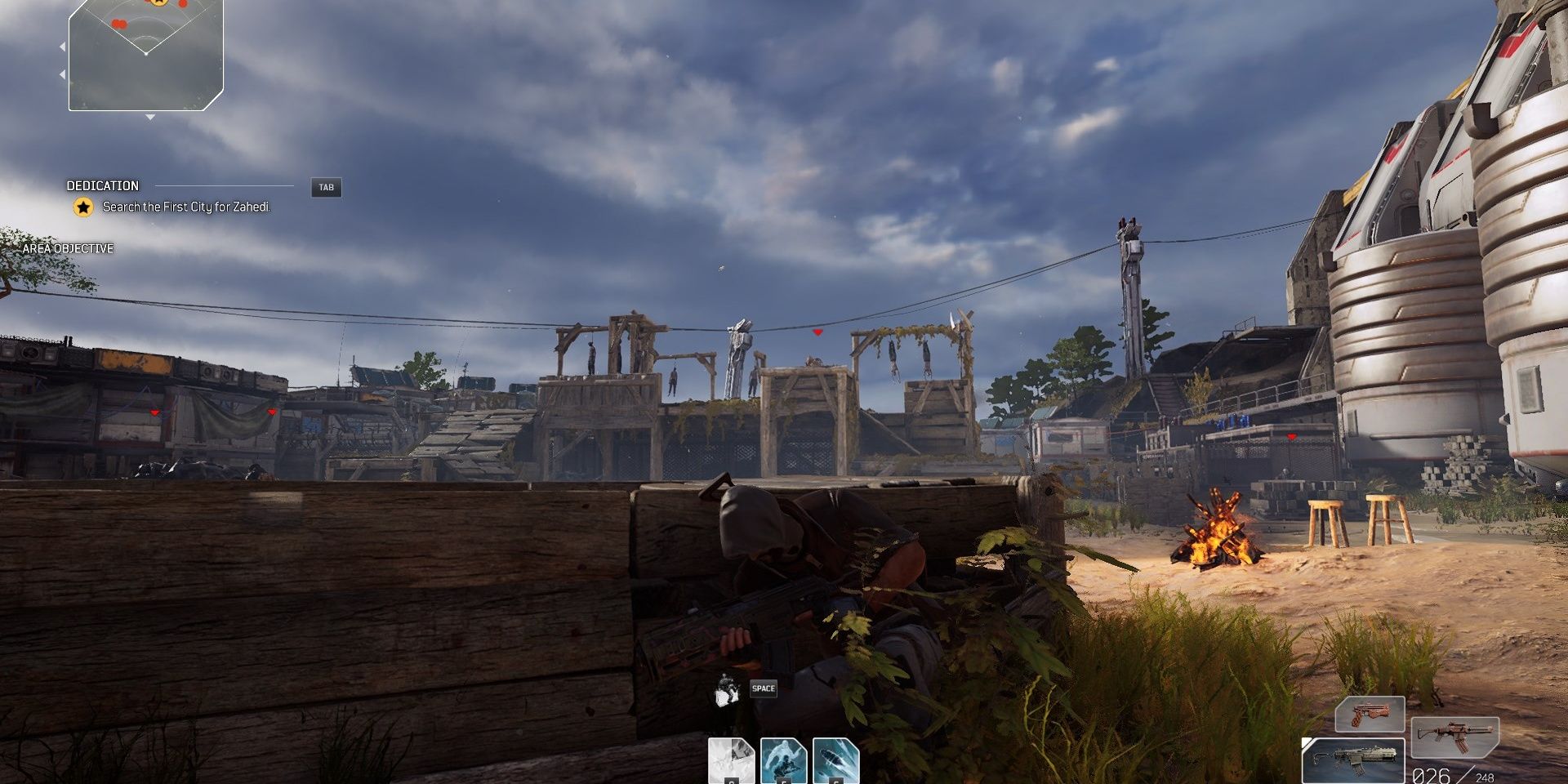 Rush the Marksman as fast as you can. These enemies can half your health in a single shot, so they mean business. Take the sniper down, then redirect your attention to the Rifleman.

Eliminate all of them to find a key that leads into the slums. Zahedi will be in a radio tower up ahead. 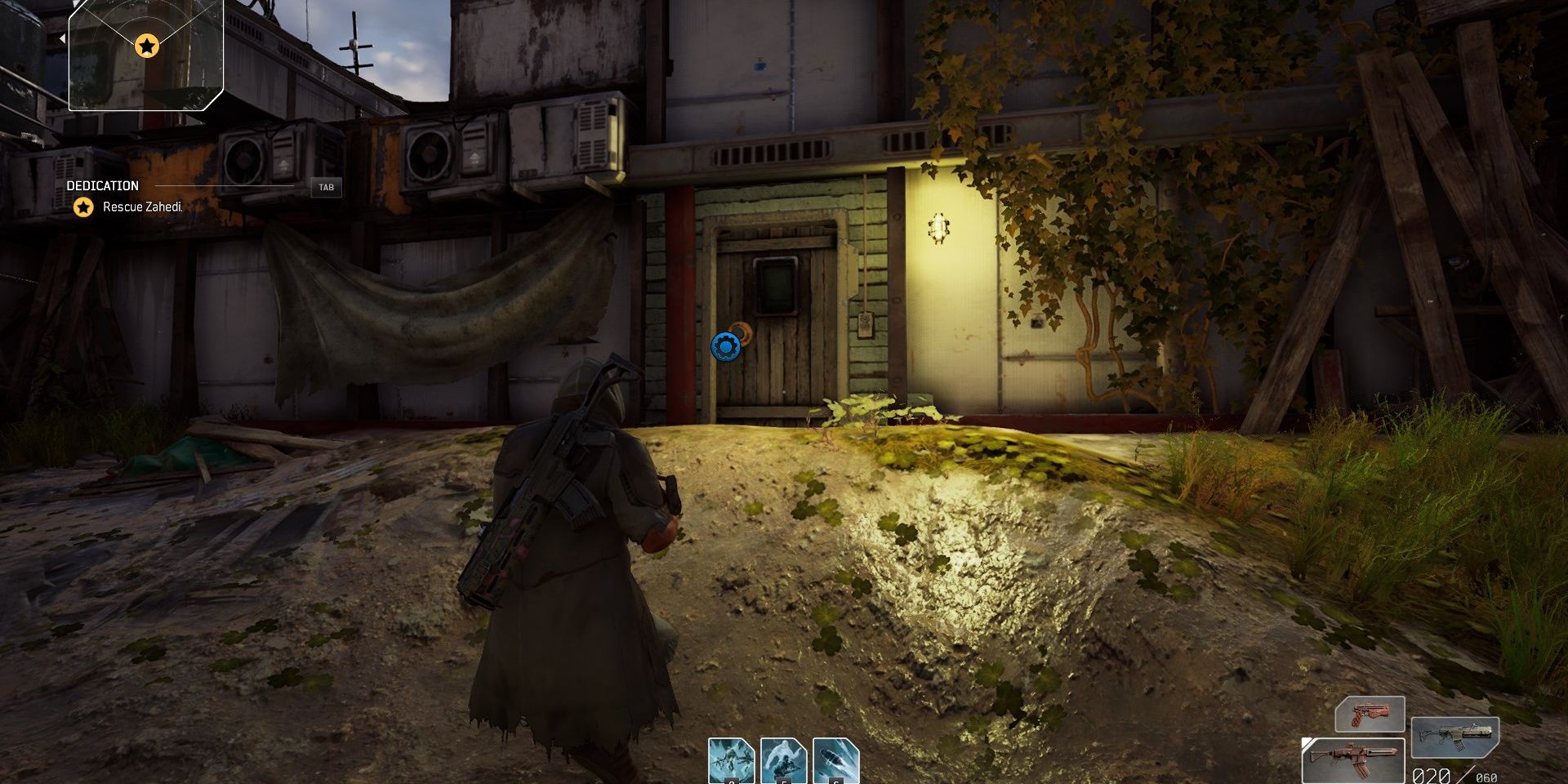 Continue down the dirt path to reach the radio tower Zahedi is being held captive in. Once again, be sure your character has optimal gear equipped and passive points allocated before you proceed. You’re about to fight an incredibly tough miniboss. 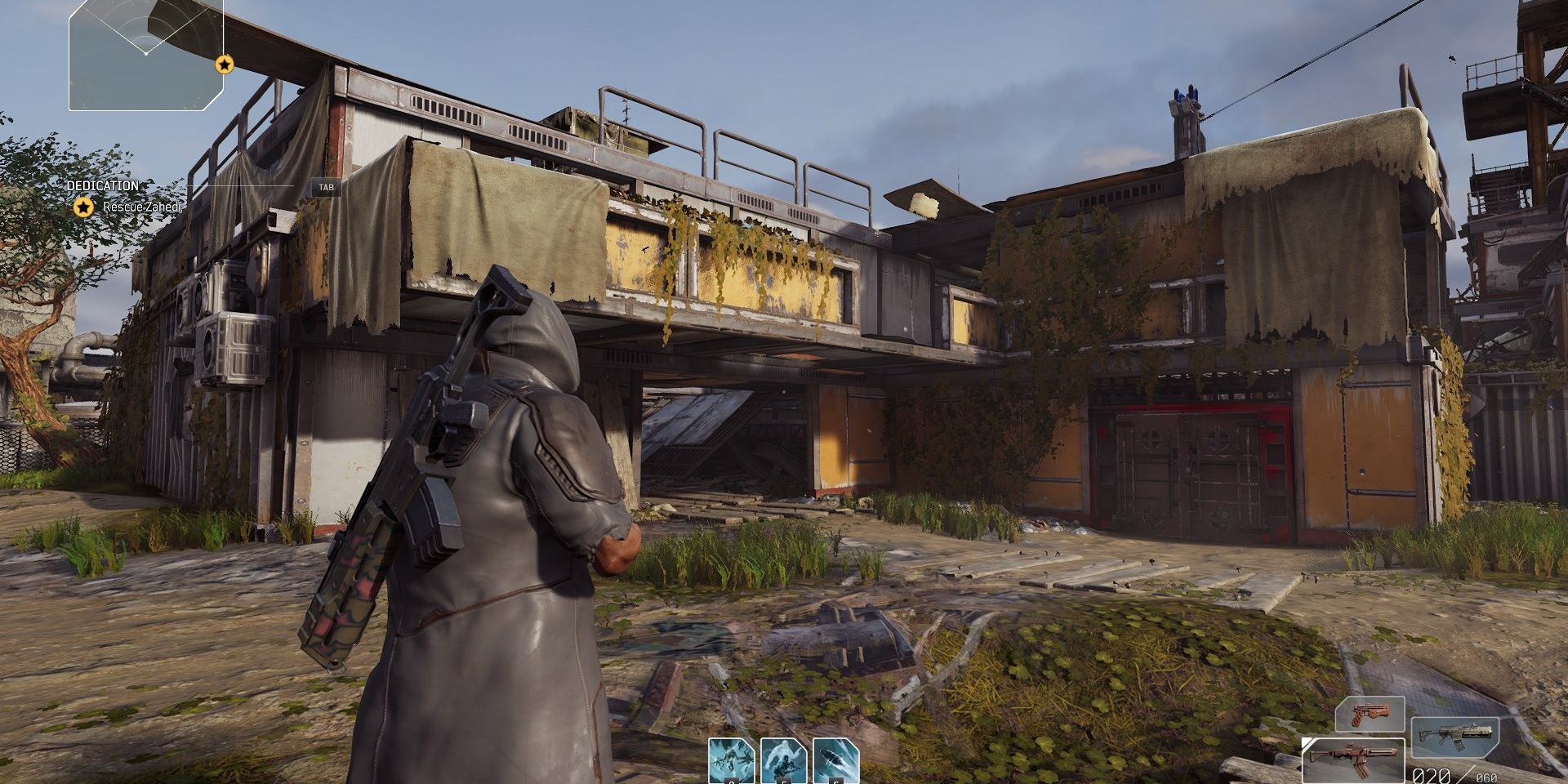 After you unlock the door, walk into the yellow building on your left. Run up the stairs to find a hidden chest near the balcony. 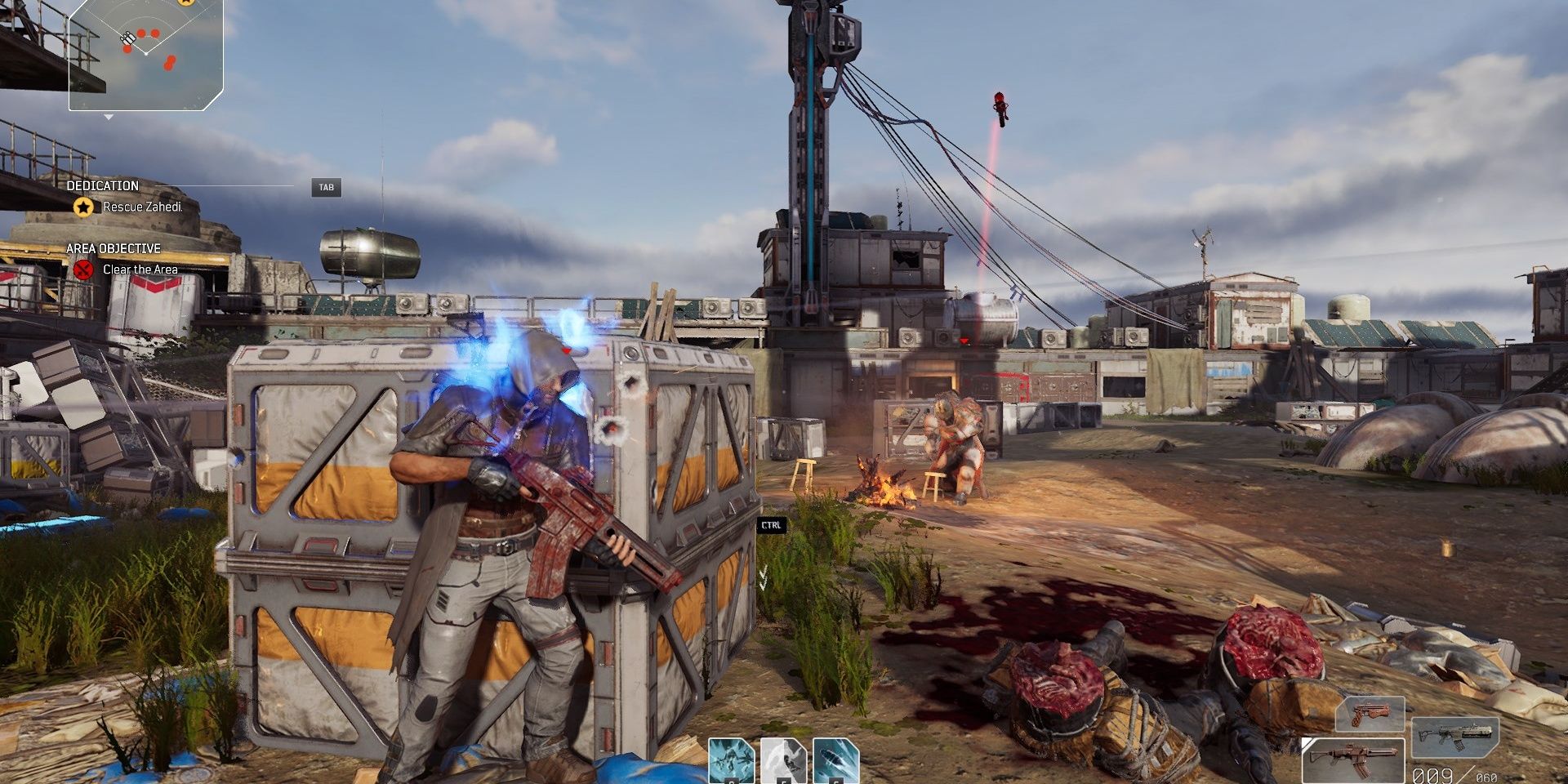 Outside the radio tower are quite a few Rifleman and Breachers. Don’t push up. Try to take the enemies out from a distance. When the coast is clear, push halfway up the arena to spawn the miniboss. 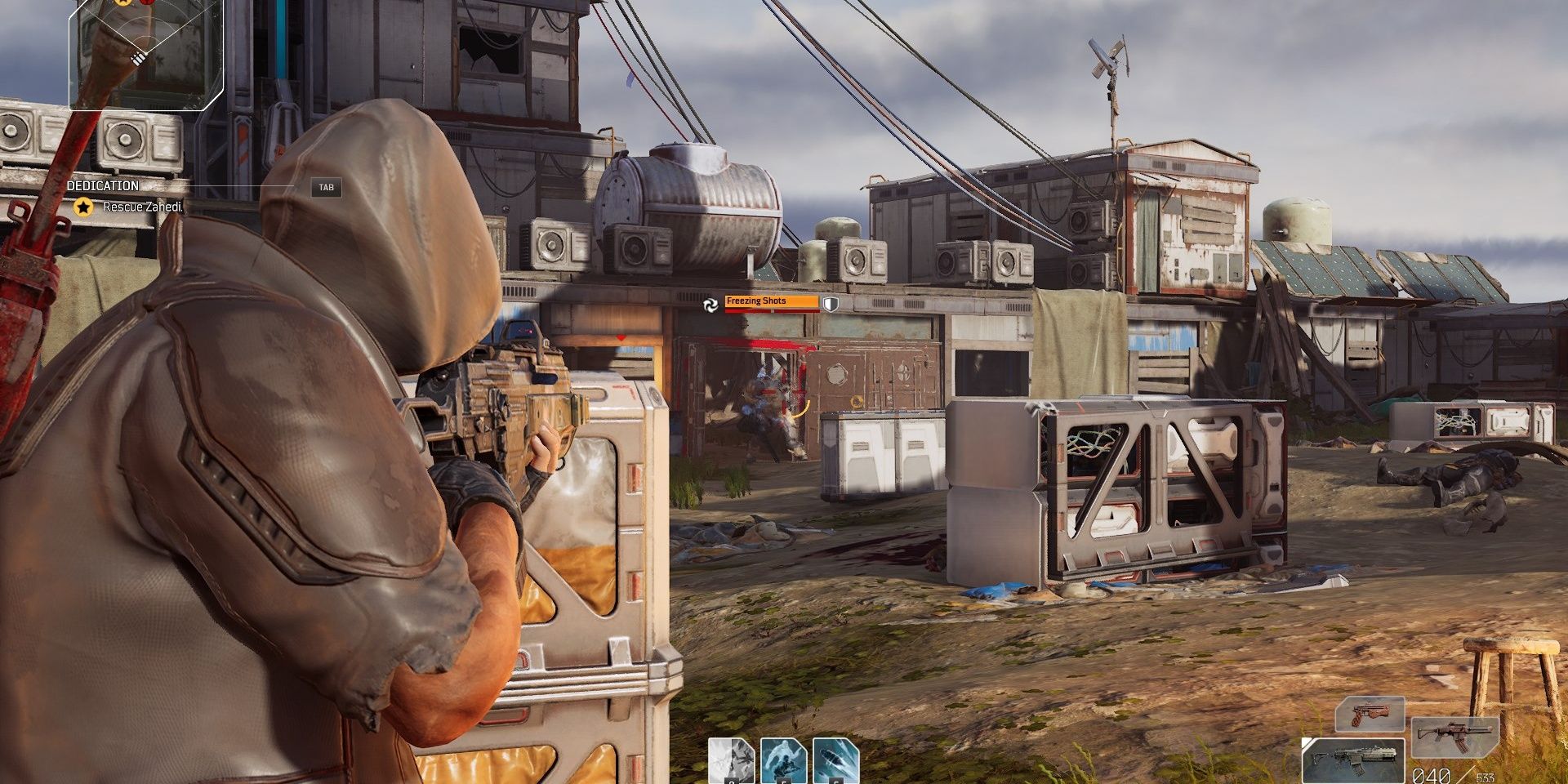 A Juggernaut Captain will enter the arena from the radio tower, carrying a massive minigun. This enemy is no joke. He has an absurdly large health pool, damage resistance against bullets, and can infuse his minigun with freezing rounds. 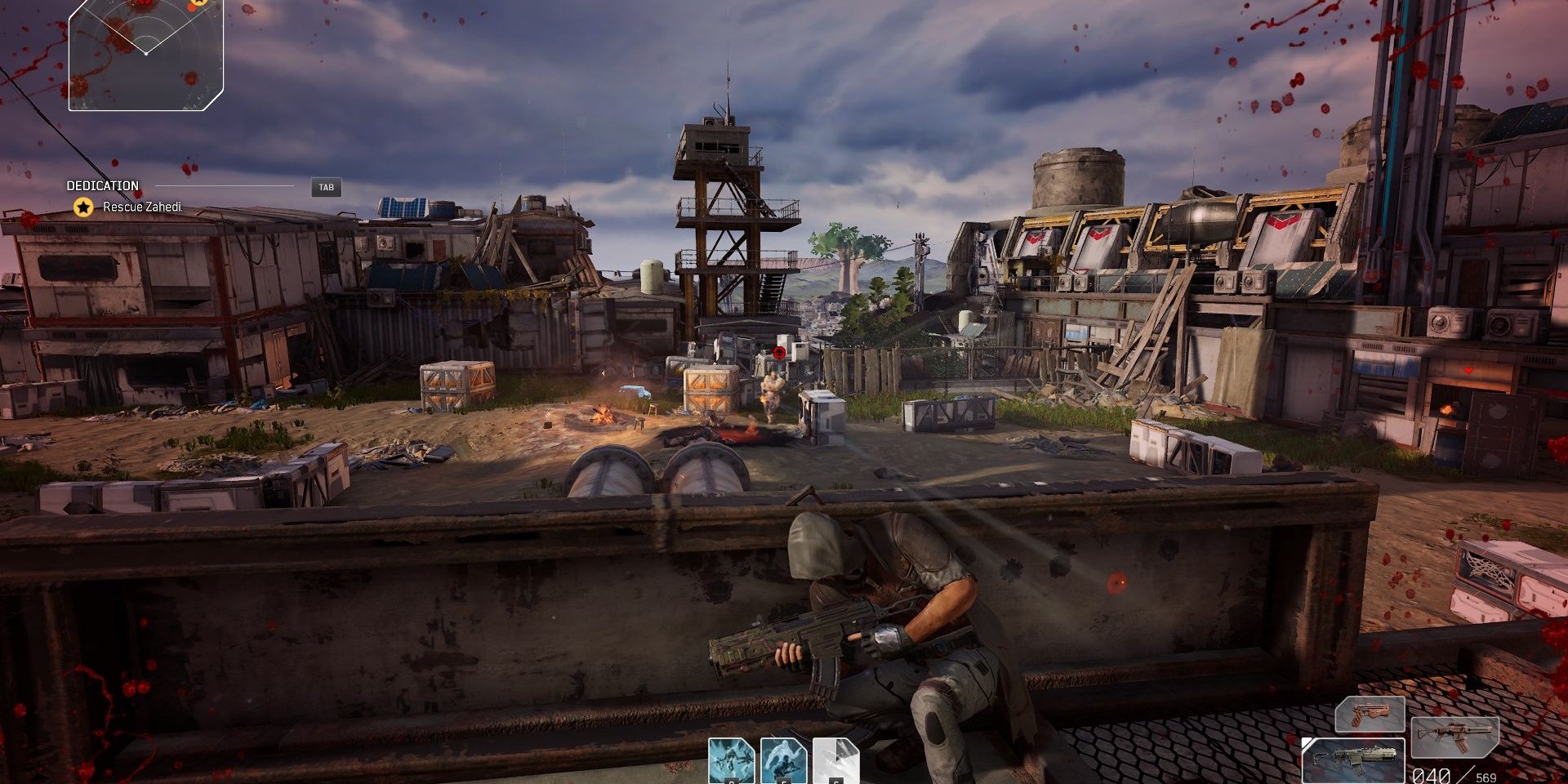 Fortunately, their armor is poor at protecting against anomaly damage. Use your abilities or any bullet-infusing abilities (Twisted Rounds, Blighted Rounds, or Volcanic Rounds) to bypass his armor and deal some serious damage. The Juggernaut will periodically infuse his minigun with freezing rounds, donated by a distinct sound and a short animation. When this happens, get to cover. The cable car on the right side of the arena is a good vantage point to fight this boss from mid-range.

Tip: If the Juggernaut freezes you, melee! Melee attacks break the Freeze and Ash status effects, allowing you to run free. 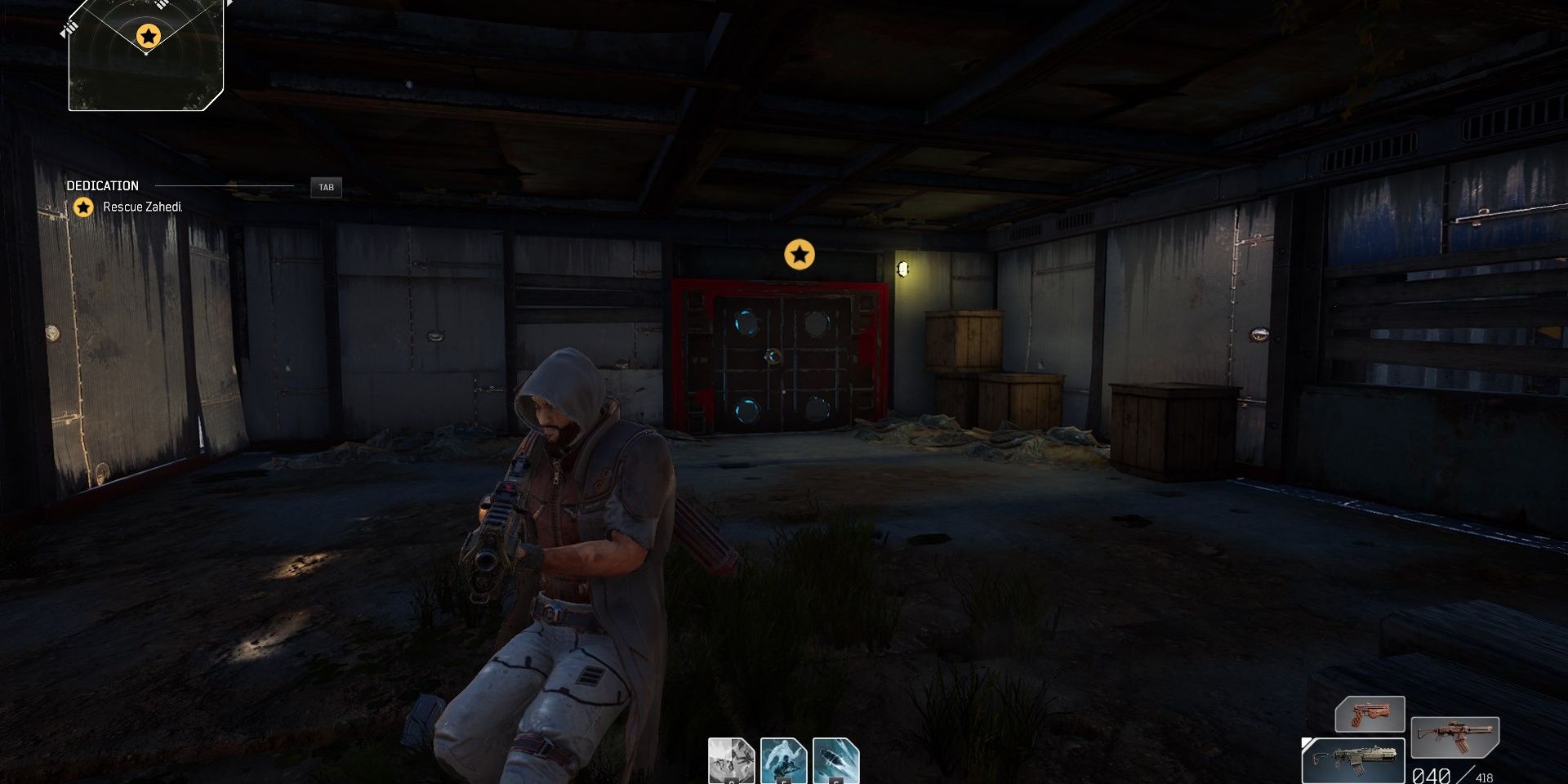 After the Juggernaut is dealt with, nearly a dozen enemies will spawn in the radio tower. Most of these enemies are Breachers. A well-placed AoE ability can make short work of these enemies. A shotgun works too. Stay aggressive, focusing on the Rifleman in the room when your health gets low. Eliminate every enemy inside, then open the radio tower door to rescue Zahedi. Complete the following quest, Salvation, to unlock Outriders’ crafting system.