Did you know that failing to add olives to a salad can shut down an entire restaurant? In Plate Up it can. This co-op cafe management game has no time for those who can’t follow orders. If you make a mistake, however small, it can be enough to spark a restaurant closure. So if you want to run a successful establishment then you’d better be a quick thinker with a solid team around you. Two things I, unfortunately, do not possess.

When you first look at Plate Up your mind will immediately go to Overcooked. However, while the basic premise of cooking, serving and co-operating is the same, this is no clone. Rather than following orders, here you take charge, choosing the restaurant layout and the menu, then work your way through 15 days of restaurant management with up to four players. After each day your profits can be spent on extra items or upgrades for your kitchen, and you can also customise every element of the experience. This means that you can’t blame the game when you discover that the sink is too far from the serving hatch. Every layout disaster is entirely of your own making, just as much as the burnt steak and incorrect order. 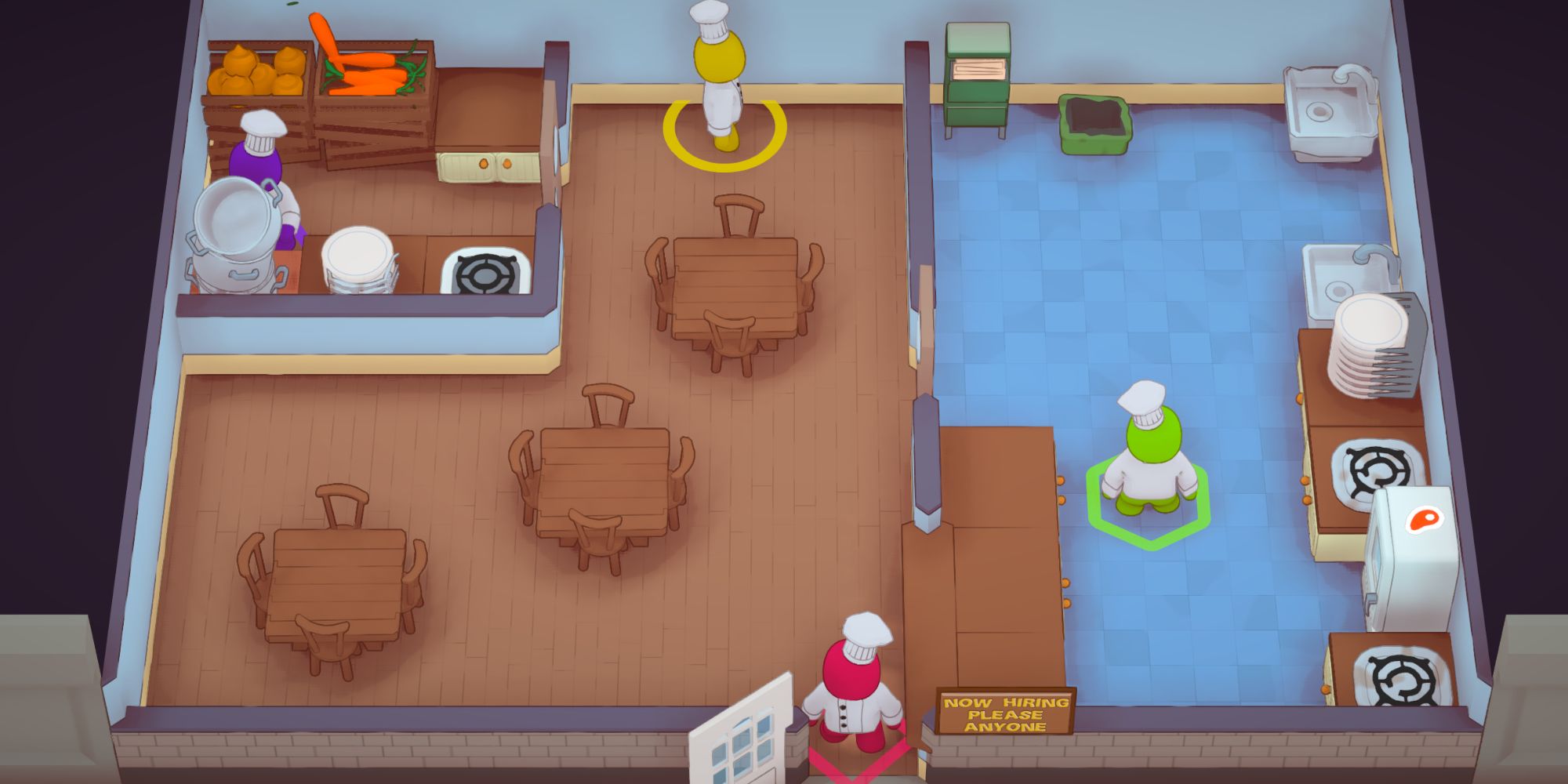 The roguelite elements that make this stand out are also what can scupper you if you don’t have what it takes to keep up. You’ll be combining different layouts and menus to create unique restaurants that you then need to run. Roguelite elements come in the form of a big closed sign. New layouts and menu items are triggered every five days and remain unlocked once the milestone is hit. However, restaurant upgrades, layout changes, and additions are as temporary as the salad you’ll be chopping. If you fail to satisfy your customers then get ready to face the culinary equivalent of “you died” as your restaurant is unceremoniously closed and you go back to day one. Failure is all a part of Plate Up’s appeal.

Solo play is designed to be easier than multiplayer, but the kitchen layouts mean the challenge is very real. There’s also an element of ragdoll physics to the game that makes your little chef hit the kitchen doors more times than you think they should. When playing with different combinations of players I found that three appeared to be the optimal number. One person to cook and plate orders, one to wash dishes and floors, and another to take and deliver orders. Adding a fourth person increased the difficulty more than the extra pair of hands helped. Although this may have been linked to the fact that the pair of hands in question belong to a twelve-year-old boy who is a master at looking busy while being of no use whatsoever.

In later levels research is unlocked and kitchen automation enters the fray. This takes some of the pressure off but also adds new things to manage and keep on top of. The early game is sheer survival. You’ll need to have a solid plan and a team who actually does what you ask of them. However, be prepared to discover that your plan fails and you need a new one. The difficulty level will eat you up and spit you out quicker than a customer who found onions they didn’t want in their food. 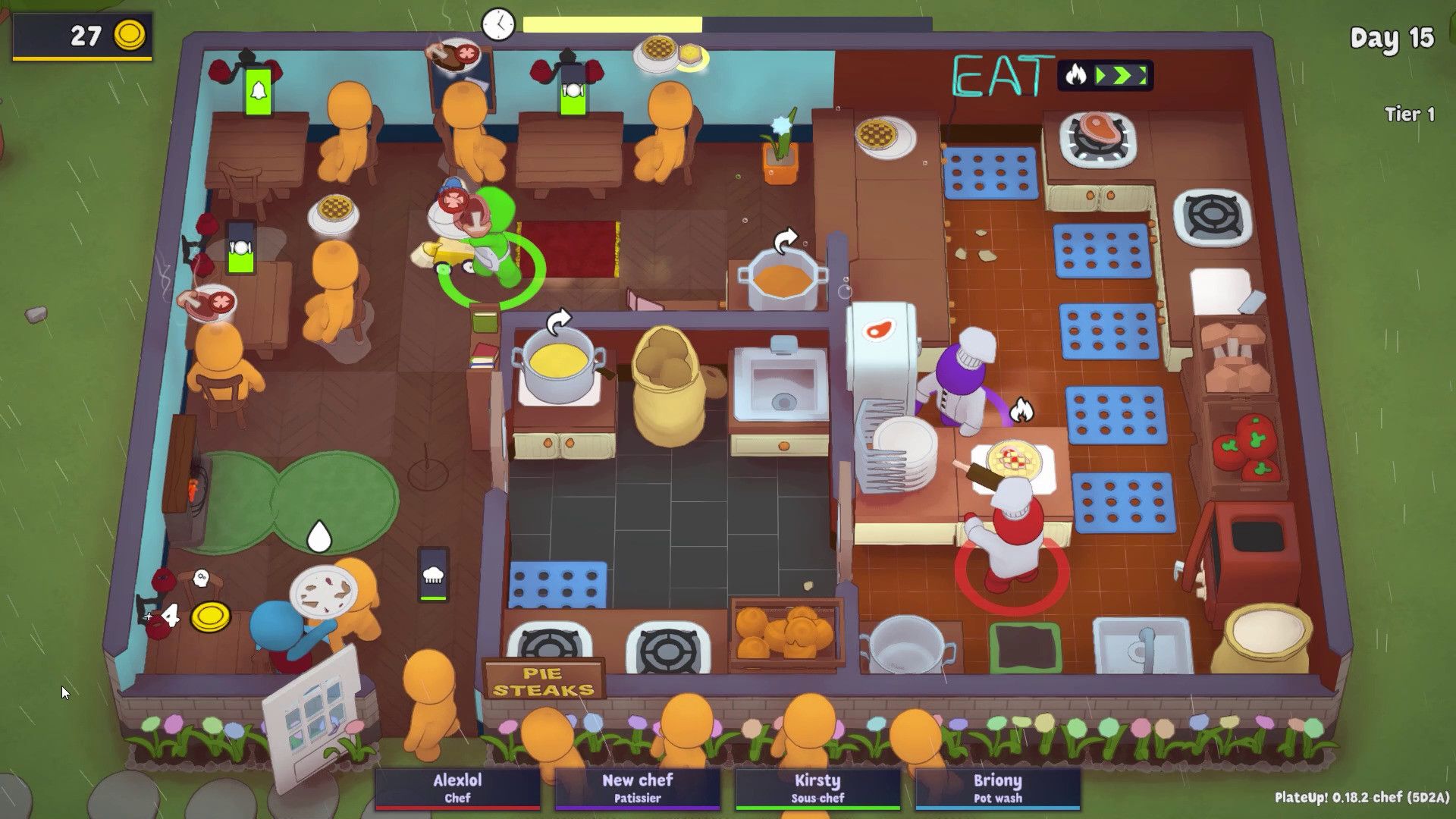 Plate Up has a heavy focus on strategy, difficulty, and customisation. These elements are clearly what the main gameplay is all about. The graphics are cute but basic, offering an experience which is not unpleasant but also not incredibly eye-catching. At first, I was a little sceptical as it feels a little low-budget but you soon realise that there’s a reason for it.

The graphics are mostly practical and functional, helping you identify items you need to, without drawing your focus. However, there are some areas they could use improvement. This is mostly tied to being able to identify specific food items and you’ll notice it very early on when cooking steak. Restaurants serving only steak are your first challenge and you can cook the meat up to three times, with the colour changing each time as it goes through rare, medium and well done. It was difficult at first to match up the colour of the steak to the customer's order and took some getting used to. If you have any issues with colour perception, or colour depth settings on your TV or monitor, this could be its own challenge.

Plate Up feels like a game that will be divisive. When starting I didn’t expect such a high difficulty curve. In fact, I took extra time to write this review as I wanted to explore more of the later game and it took much longer to get there than I expected and there’s still far more I simply haven’t been able to reach yet due to a lack of skill on my part. I also played multiplayer with my teens and the one who loves a challenge enjoyed it far more than the other, who simply got frustrated. If you’re not ready to invest a serious amount of time into mastering the intricacies of fulfilling orders quickly and efficiently then Plate Up won’t be for you. Having to restart entirely if you fail after day three can get old very very fast and getting all the way to day 15 requires a skill that more casual players like myself are likely to struggle with. 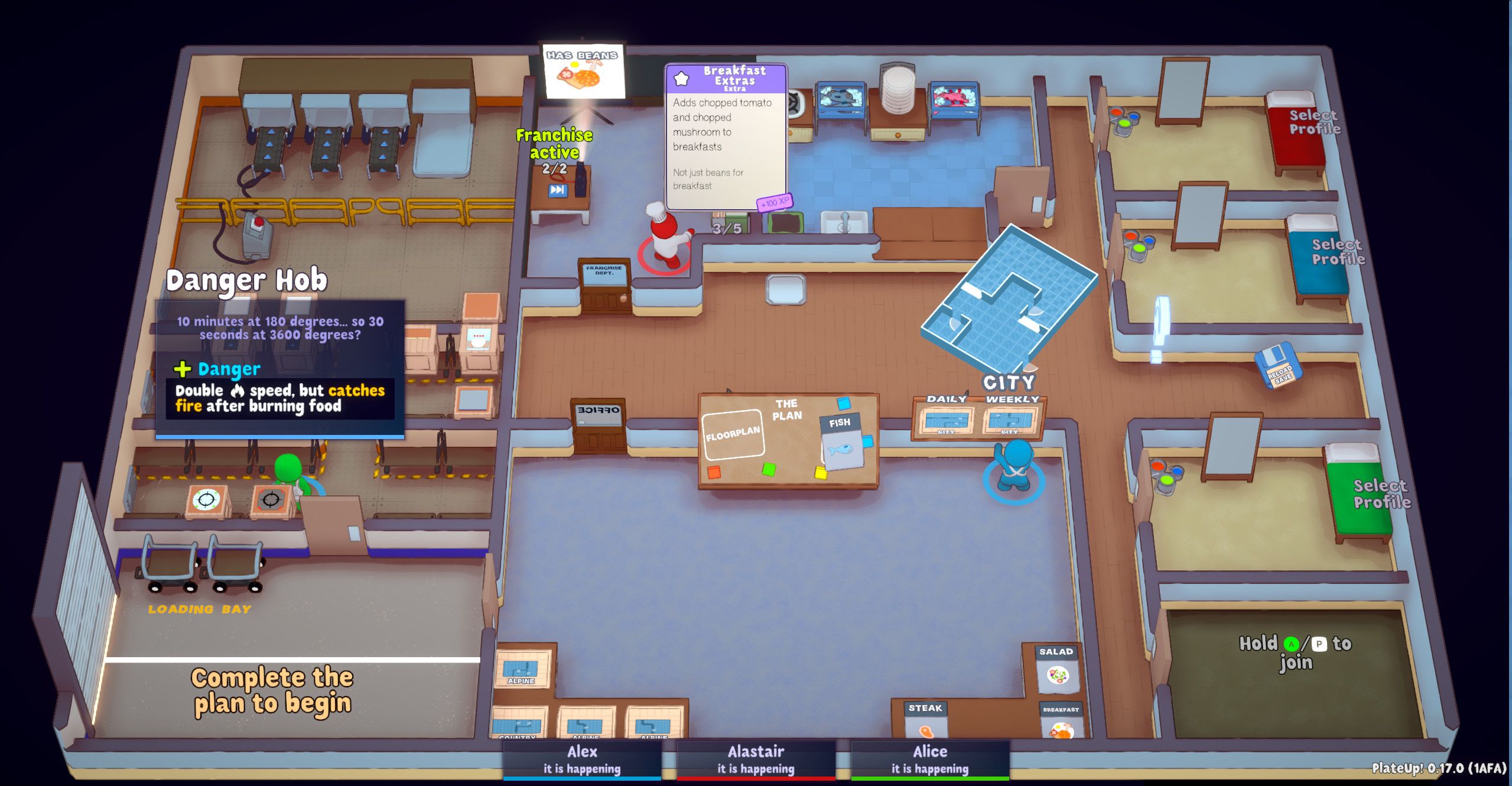 I found the difficulty curve to be brutal in many places. I had to rely a lot on the help of my teen who loves more challenging games. It really forced us to work together, make plans, adjust on the fly, and communicate throughout. Without that, I think we’d have given up far sooner. In fact, the other kids did give up pretty fast. If you’re looking for a quick, fun and easy time then quite simply Plate Up isn’t for you. It really is a next-level experience with a layer of strategy and planning that’s far deeper than most games of this type.

The customisable kitchen requires you to consider layout and upgrades carefully. If you don’t buy an extra table early enough you can run out of space for all the patrons you need to serve, but unless you’ve got the infrastructure to process the orders you’ll be swamped if you expand too fast. Everything is a balancing act. This also extends to different perks you’ll unlock. At certain points, you’ll be offered a choice of perks but they are not as advantageous as you may expect. For instance, you can gain more experience with a “photographic memory” perk but you'll need to remember orders and will only see visual prompts if someone is close to the customer ordering. Likewise, an upgrade to your speed can leave you trailing mud in your wake, meaning your advantage can slow others down.

Overall, Plate Up is a unique restaurant management experience, mixing roguelike elements into the genre in a way I’ve never seen before. It requires a keen mind, good planning skills, excellent communication, and tenacity. All of which I don’t have. Luckily the game also lets you practice new recipes by feeding cats. It was the perfect way to work on my skills while wondering if these cats do ever get full.

Score: 3.5/5. A review code for PC was provided by the publisher.