Game Freak has made changes with each new entry in the Pokemon franchise. One of these additions came in the form of regional variants, which gave dozens of old Pokemon a well-deserved glow-up. These are monsters that have made appearances in prior games, but now have an altered appearance and typing exclusive to a specific region in the world of Pokemon.

It’s easy to get caught up in which Pokemon are best suited for fighting and which are great defenders, but sometimes it’s more fun to put strategy aside and choose your team based on aesthetics. 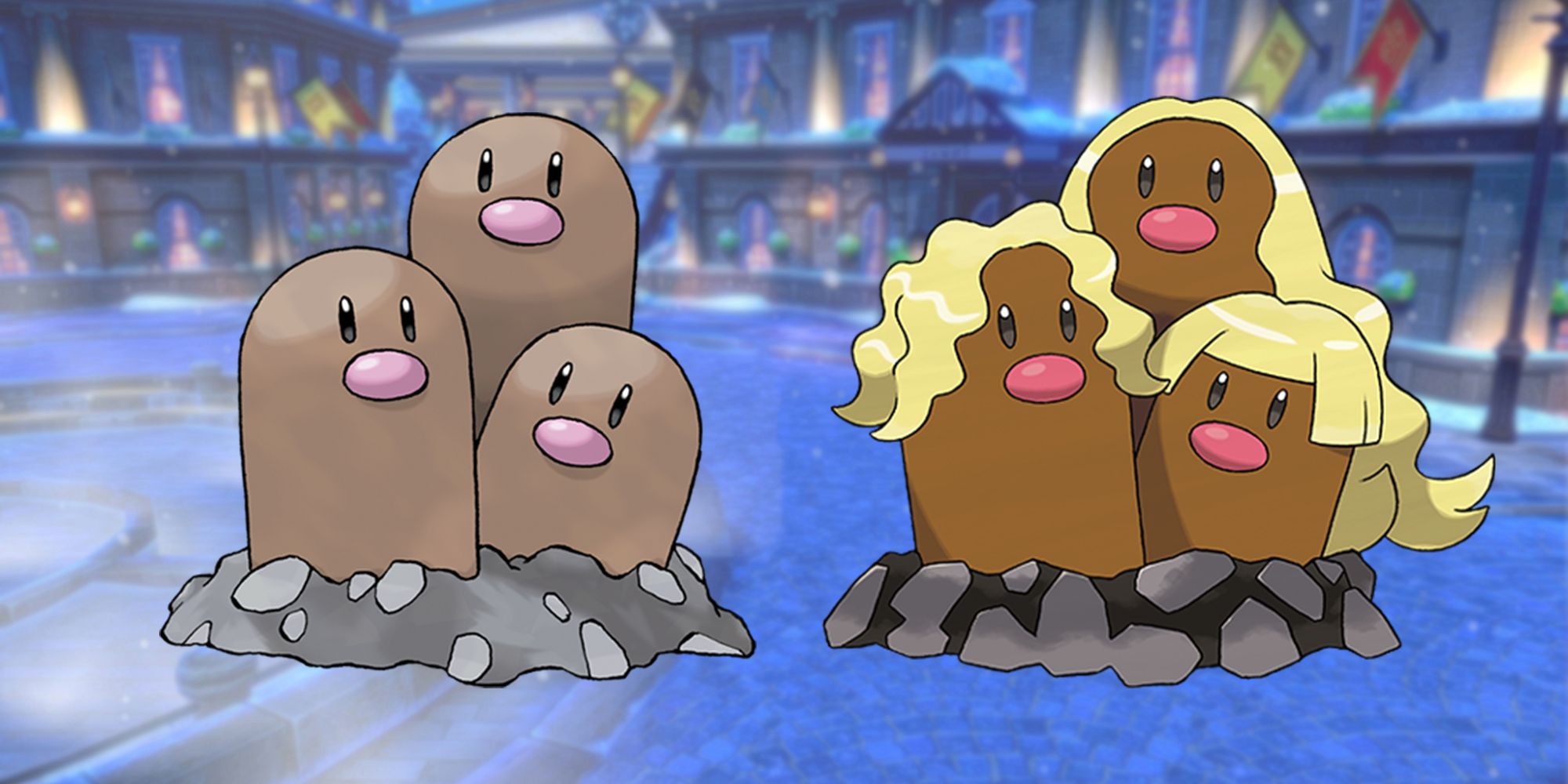 Regional variants saw their debut with the release of Pokemon Sun and Moon. While many of these Pokemon looked pretty bizzare compared to their original forms, there were a couple that were actually pretty adorable.

In the case of Dugtrio, it's a coin toss whether you would consider the Pokemon cute or downright silly. The notoriously smooth-headed Dugtrio that Pokemon fans know and love grew some luscious locks overnight. More puzzlingly, the Alolan variant somehow gained a Steel-typing with this hair growth. 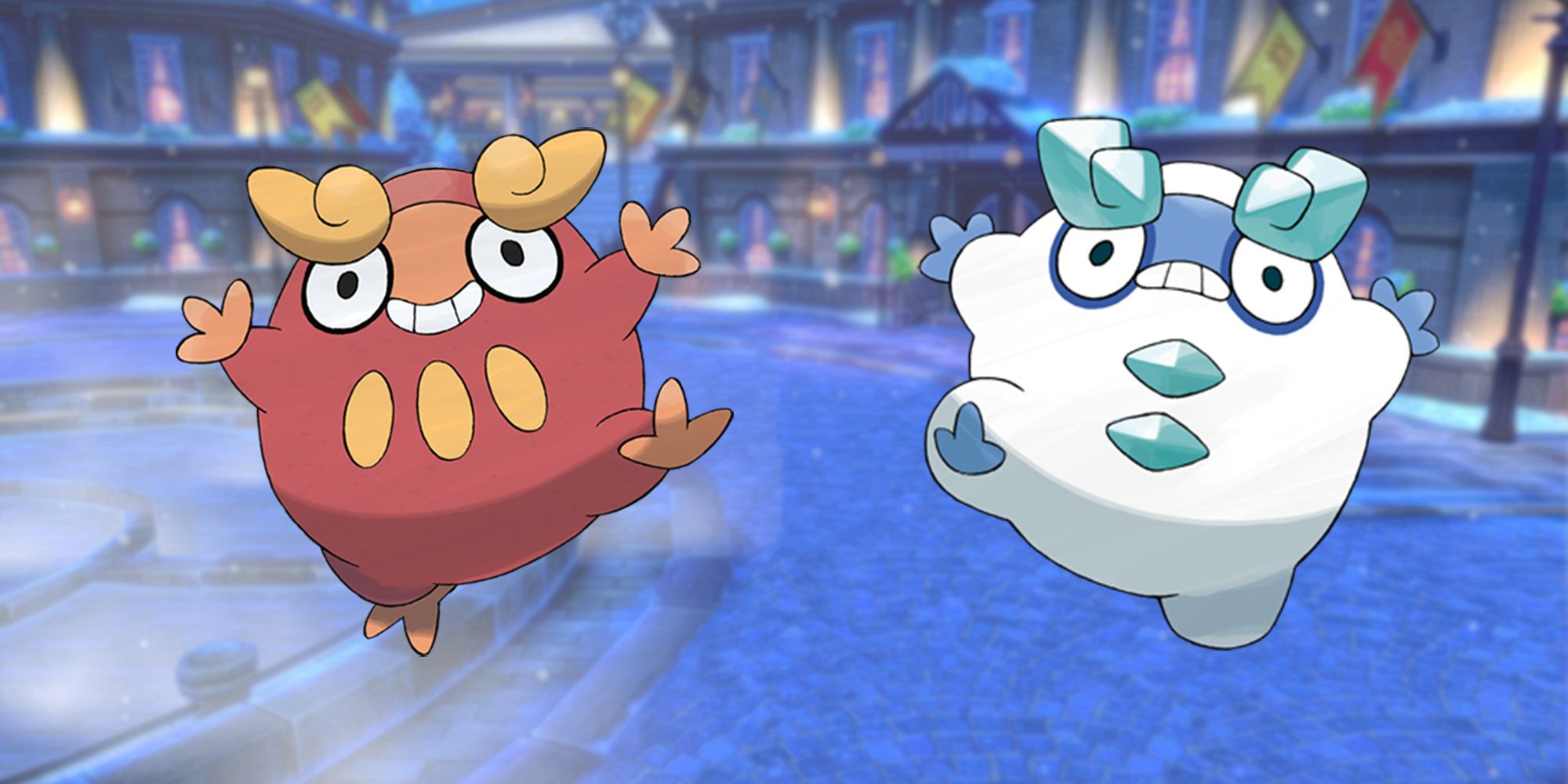 Galarian Darumaka experiences some pretty big changes, with a complete design, color, and typing overhaul. It transforms from a red-hot Fire-type Pokemon to a frigid-cold Ice-type, with its color palette changing suit to match.

Though Galarian Darumaka is quite a bit nicer looking than its original form, it would takemore than a color change for it to rank higher. The Pokemon also has a disconcerting scowl that detracts from its otherwise charming appearance, making it look somewhat standoffish. 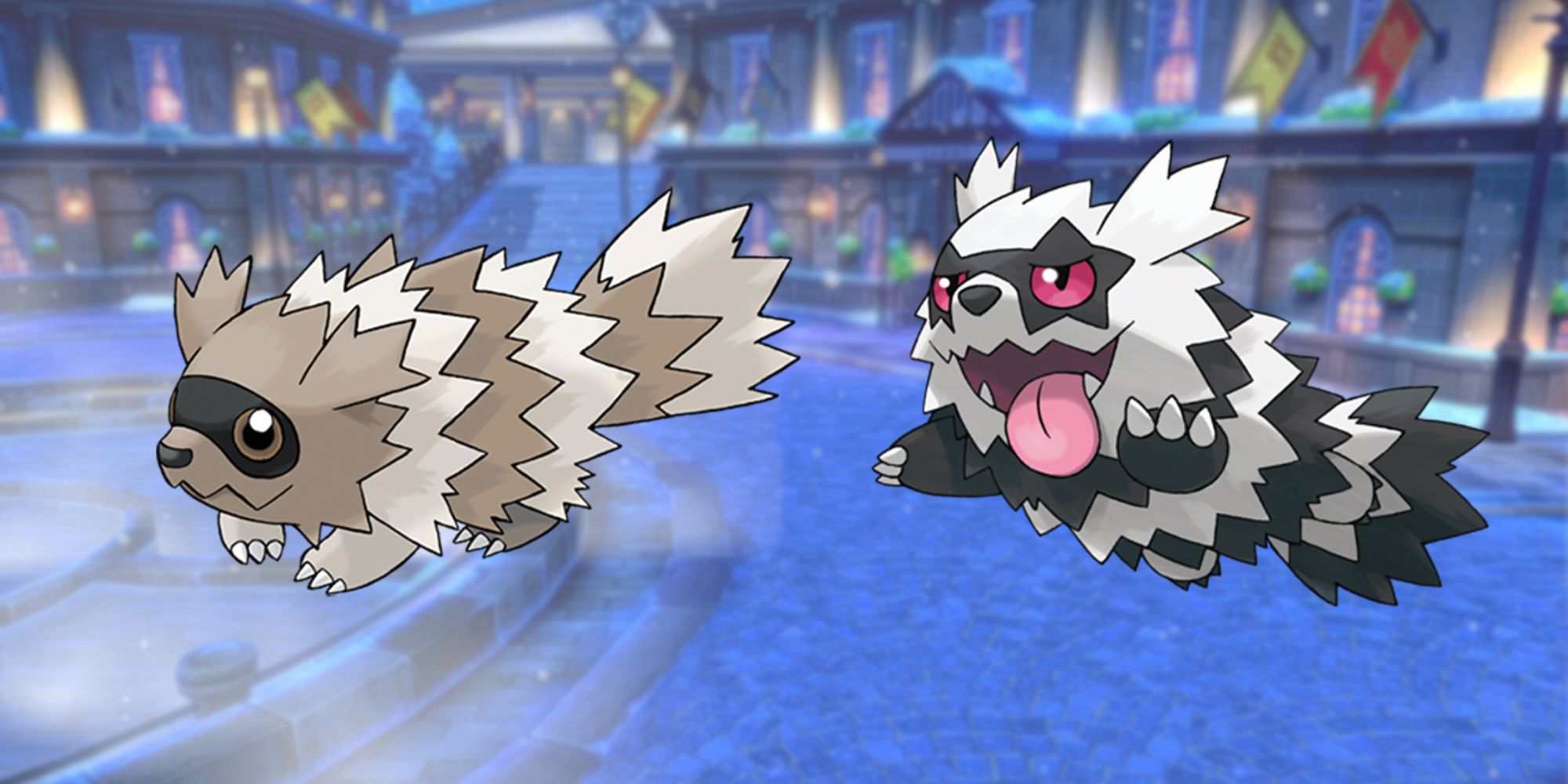 Zigzagoon already looks adorable with its raccoon-esque appearance, but its cuteness level bumps up ten notches in the Pokemon's Galarian variant. Galarian Zigzagoon resembles a rock star, with its dark star-shaped eye shadow, black and white color palette, and tongue hanging out of its grinning mouth.

This Pokemon makes some big changes from its regular form and has a much more easy-going and confident appearance. While black and white aren't typically cute colors per se, Galarian Zigzagoon wears them with style and gains a Dark-typing as a result. 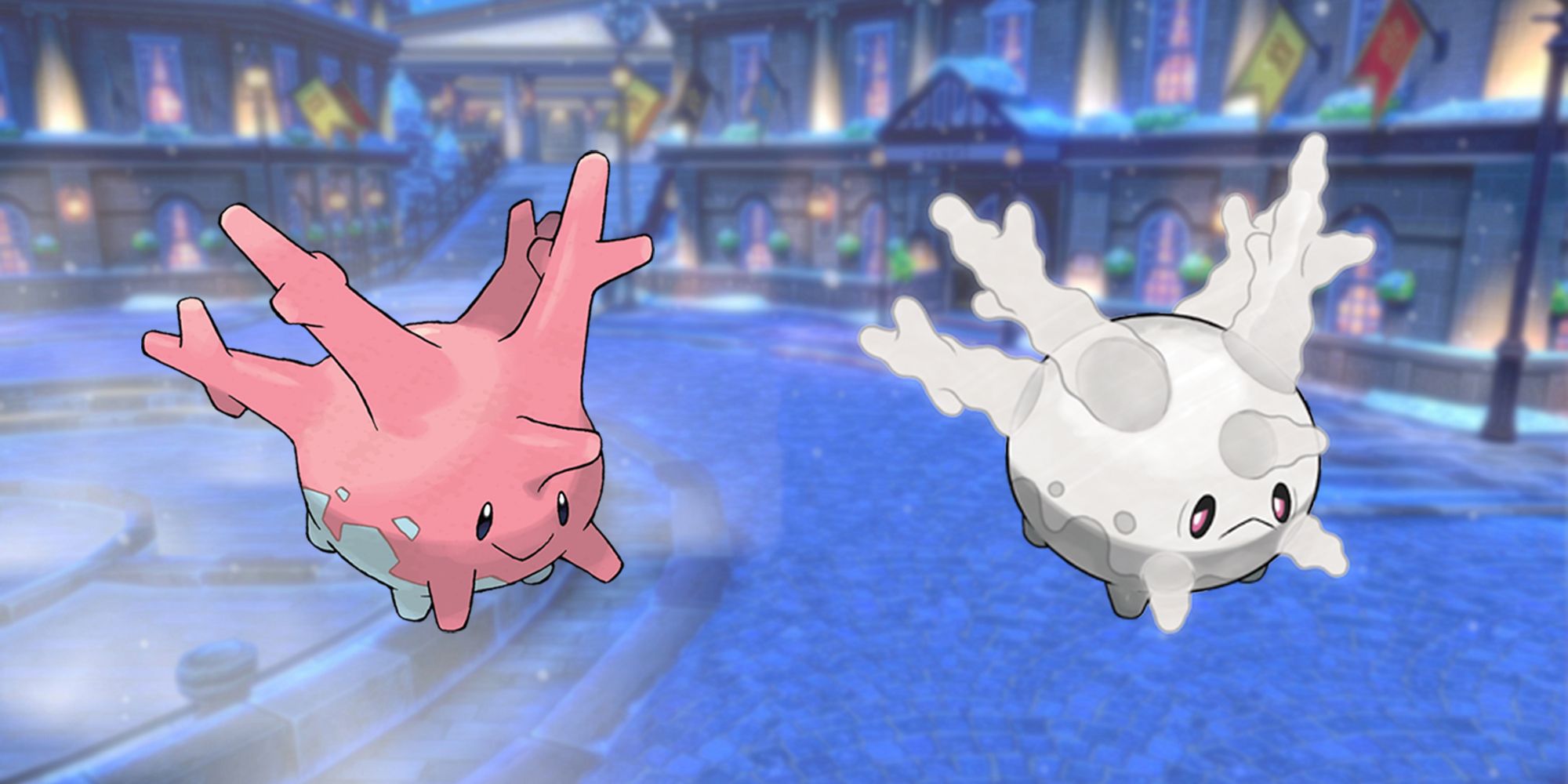 Since Corsola's base form is already extremely aesthetically appealing, it seemingly should have been difficult to top that in its regional form. Somehow Game Freak found a way to design an even better Galarian Corsola, which is all-white and appears to resemble a ghost.

The normally happy-looking Pokemon appears to have had some rough days in the Galar Region, as its typically smiling face now wears a frown. Galarian Corsola loses its previous Water and Rock-types and instead holds a Ghost-typing to match its new appearance. 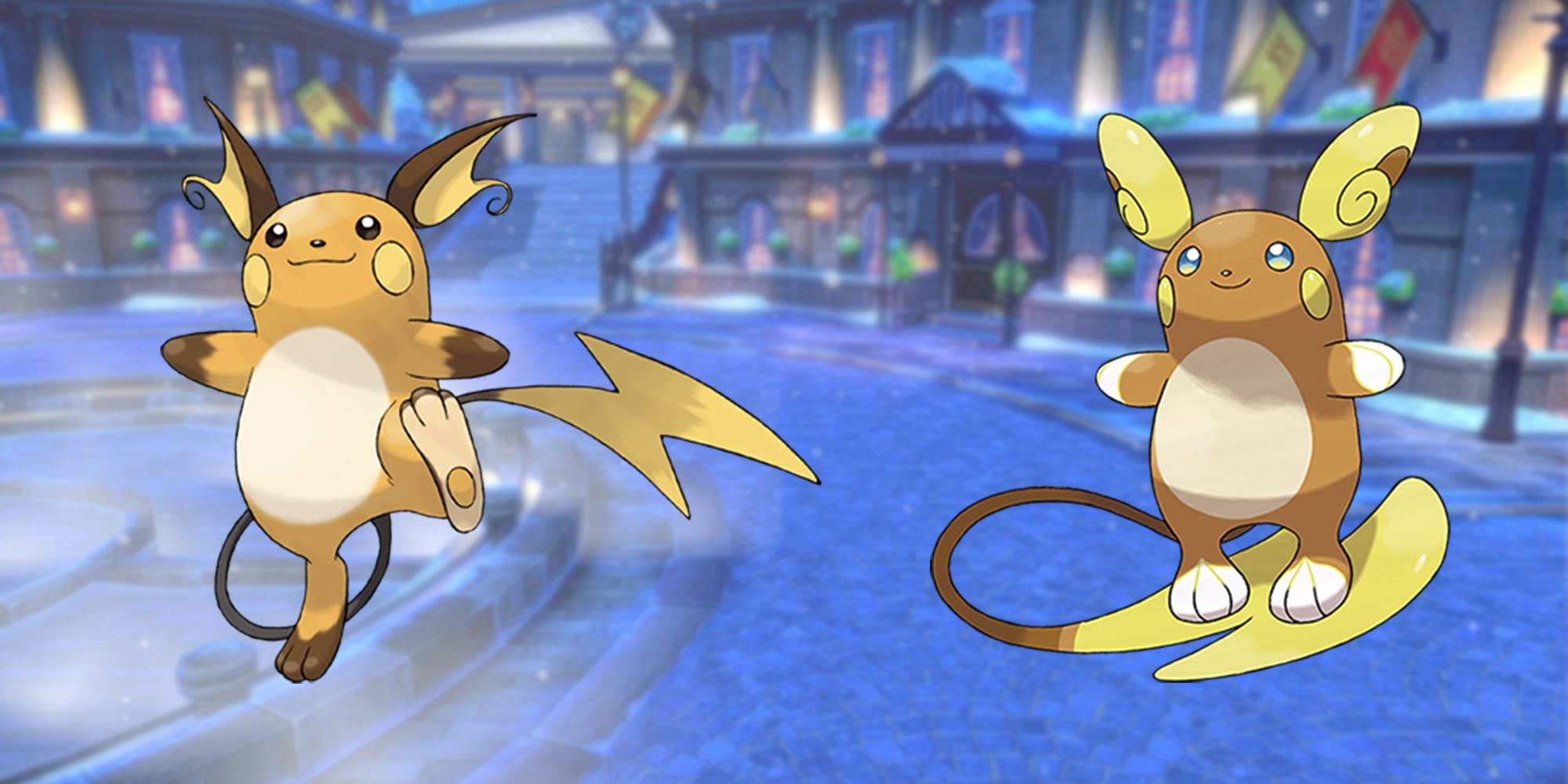 Fans may consider it sacrilegious to change Raichu's design since it's the evolved form of the most iconic Pokemon of all, Pikachu. Putting that aside, Alolan Raichu offers a refreshing softened version of this beloved Pokemon, featuring more rounded edges and a muted color palette.

One of the most notable differences in Alolan Raichu's design is that the Pokemon's once spiky lightning bolt tail is now a surfboard that he rides around on. This falls in line with the island-life theme that characterizes the Alola Region and enhances the Pokemon's overall appeal. 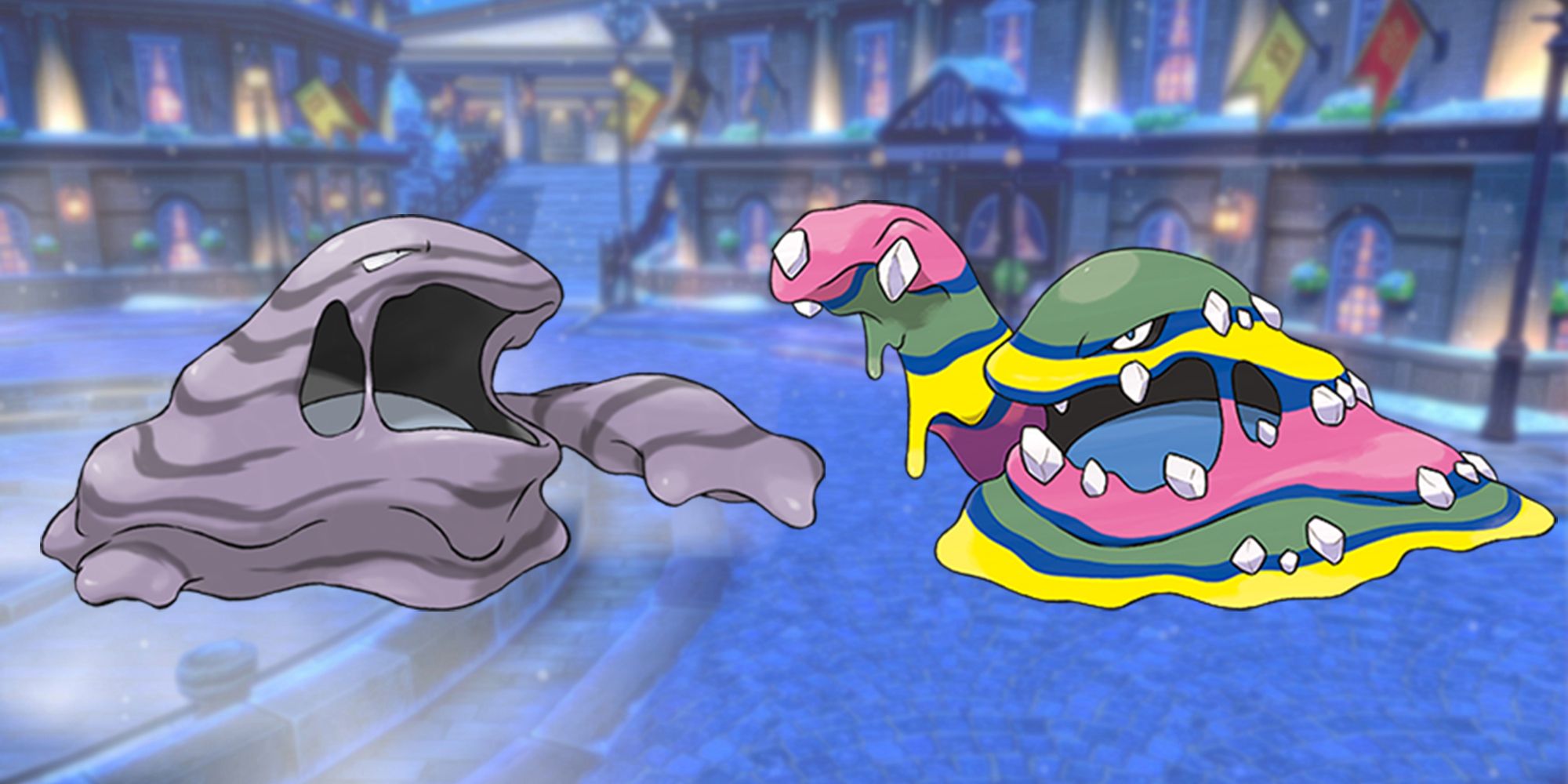 It's difficult to picture Muk, the literal embodiment of grossness, as cute in any way. Nonetheless, Alolan Muk seems to have beaten the odds, as its rainbow-like appearance makes the purple blob Pokemon transform from drab to fab.

Its design is even further enhanced when the Pokemon changes colors, which it does every couple of seconds as it slugs around. All things considered, Alolan Muk is a great-looking Pokemon and deserves to be recognized as more than just a pile of goo. 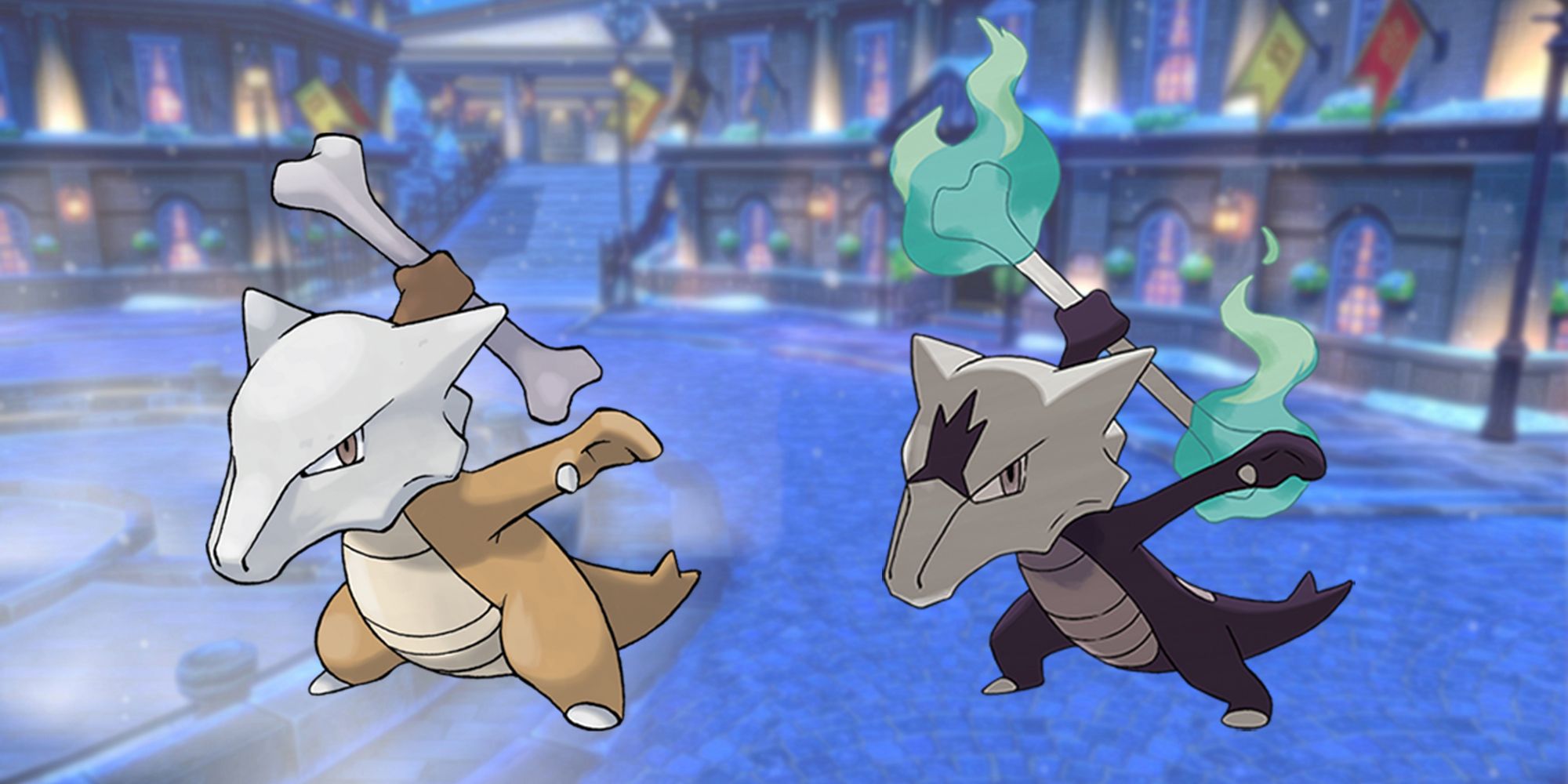 Alolan Marowak is not only a wonderfully designed regional Pokemon, but it actually makes more sense than the standard form. Kantoan Marowak has a skull for a head and wields a bone in its hand, which would seemingly point towards a more sinister typing than Ground-type. Alolan Marowak matches the Fire and Ghost-type aesthetic with its new look.

Alolan Marowak looks even bolder than its standard form. Its trusty bone-weapon shows flames burning on both ends, and the Pokemon's overall design has a more serious yet still somehow cute tone. 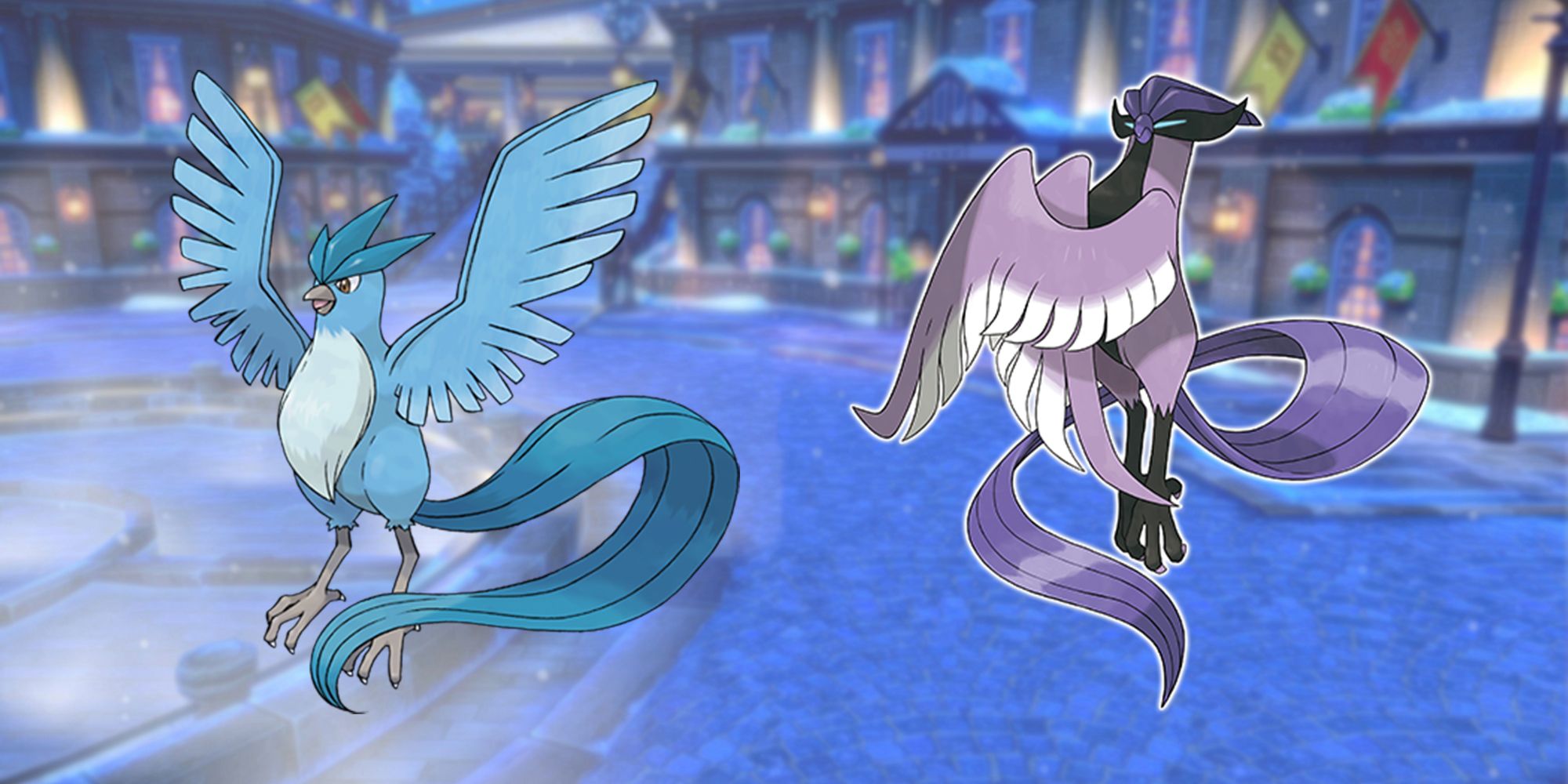 Galarian Articuno features one of the more drastic changes in its regional form. Its name resembles the word 'arctic,' which doesn't make much sense when the regional form's typing changes from Ice-type to Psychic-type.

Regardless of this minute detail, Galarian Articuno is a beautiful Pokemon that is arguably better looking than the base version. This legendary bird Pokemon showcases stunning purple plumage and overall looks much more mature than its standard form. 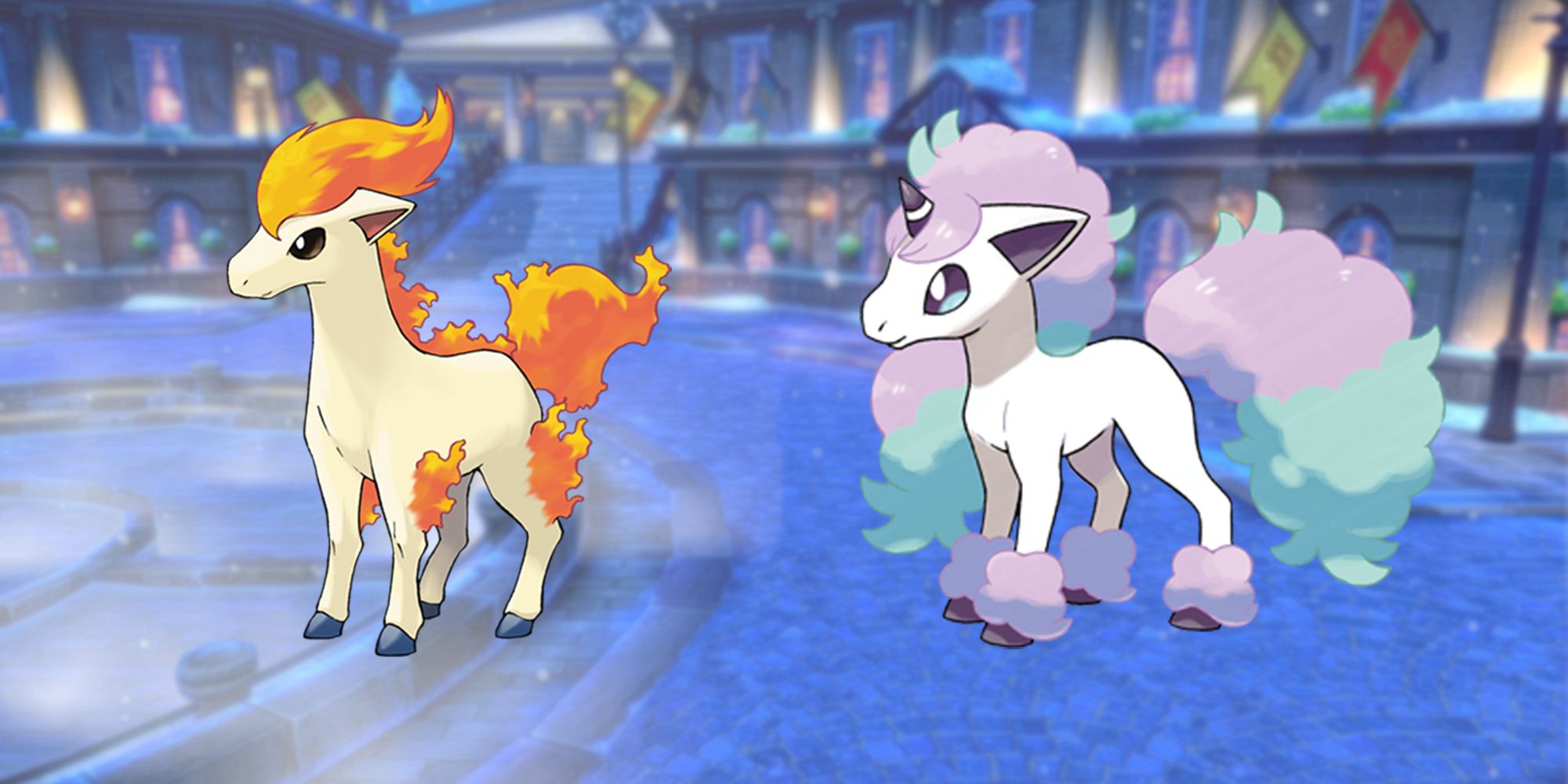 Pokemon Sword and Shield added a slew of good regional variants. One particularly great example is Galarian Ponyta, which adds a splash of color to the formerly blazing hot Fire-type Pokemon.

Galarian Ponyta’s mane and tail resemble cotton candy, and its typing changes to Psychic-type to match a new and less abrasive appearance. Fans may be underwhelmed by shiny Galarian Ponyta though because it dulls down the bright colors that make this regional Pokemon stand out. 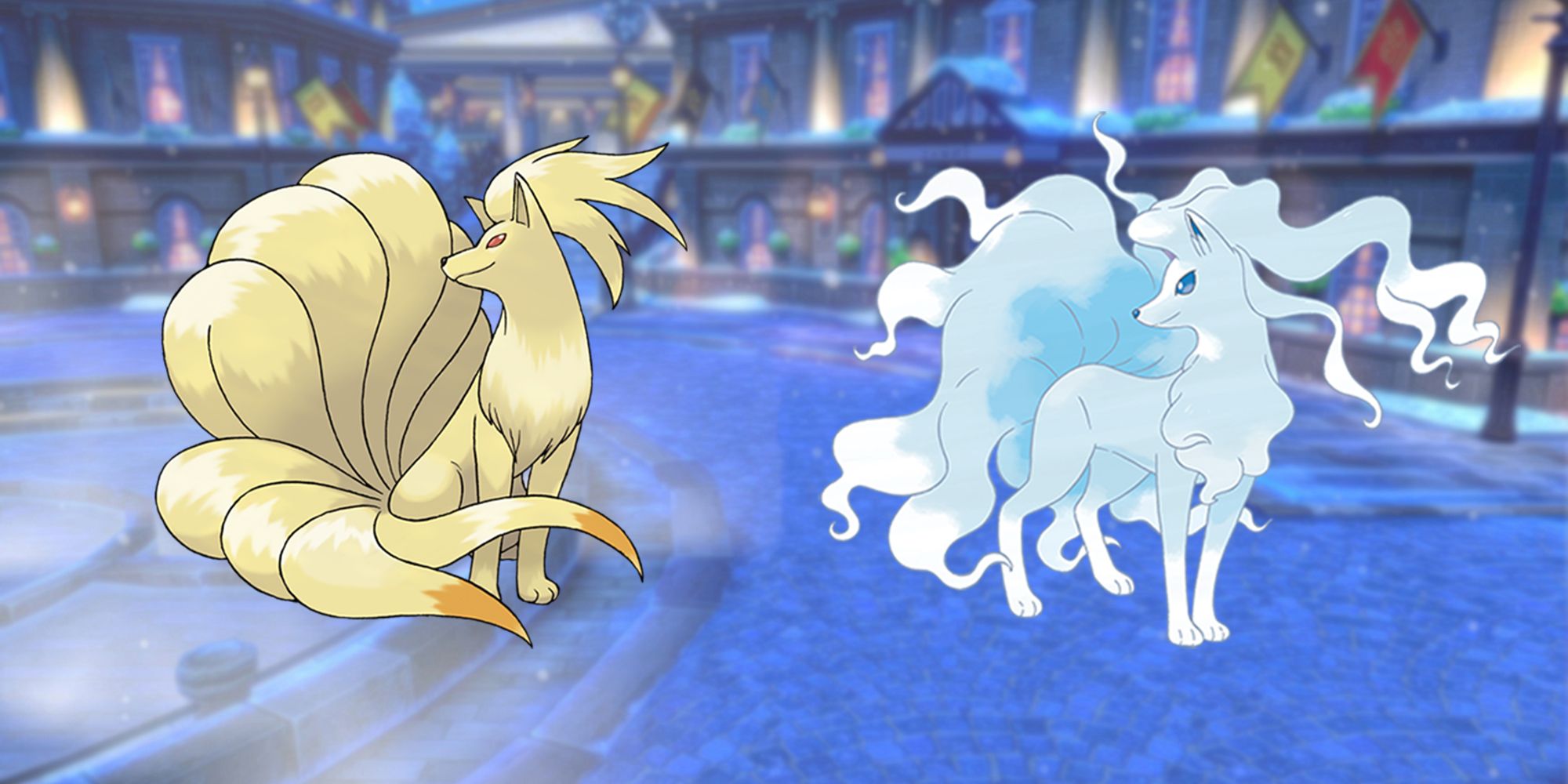 Very few Pokemon are as elegant as Alolan Ninetales. Its wispy tail and mane are a far cry from the standard Ninetales, and it only adds to the Pokemon's glamorous aesthetic.

Alolan Ninetales deserves a crown to match its regal appearance. Seeing as one isn't available to give out, as a nice substitute, Alolan Ninetales is awarded the rank of cutest regional form currently available in the world of Pokemon.