There’s a new set of events going on in Pokémon GO, this time centered around battling using Mega Evolution. It’s been a bit of a rough go, honestly, as many fans don’t appreciate the way Megas have been implemented as a “rent-a-Pokémon” system. Developer Niantic quickly responded by reducing the amount of resources required for Mega Evolution, but the hype still isn’t quite there. Enter this week’s Mega Battle Challenge, which hopes to get fans invested by making it more rewarding to unleash Megas.

The event runs from now until September 17 at 10 PM local time. During this period, Pokémon GO players will have access to a timed quest line that rewards Beedrill Mega Energy. For your convenience, we’ve taken the guesswork out and listed all the steps of the Mega Battle Challenge Timed Research here. 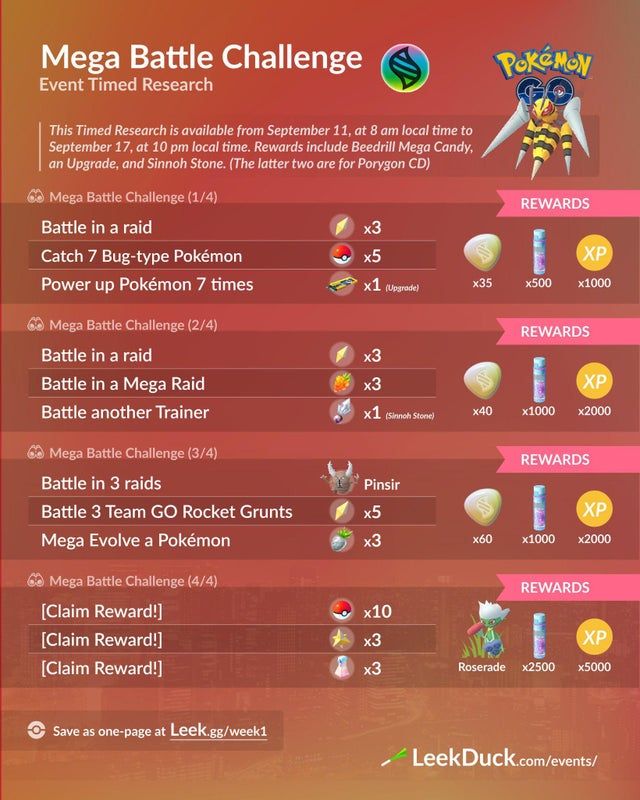 What The Rewards Do

Overall, the rewards granted by the Mega Battle Challenge are pretty straightforward. The most obvious goal of the questline is to give players enough energy for a free Mega Beedrill evolution. This comes well-timed as a hopeful remedy to player dissatisfaction over Pokémon GO’s Mega Evolution mechanics. Even if Beedrill isn’t the most exciting Pokémon, giving players easy resources to Mega Evolve at least once might warm them up to the idea.

Another benefit of this quest chain are the Upgrade and Sinnoh Stone. Porygon Community Day is a week away, and these two items happen to be exactly what the digital bird needs to evolve. It’s a nice little gift from Niantic, even if most dedicated players have a pile of evolution items sitting in their inventory.