Pokemon Scarlet & Violet has the worst review score for a mainline game in the series since 2004's Pokemon Emerald on the Game Boy Advance.

You might not need to head this by now considering how many players are reporting bugs, glitches, slowdown, and progression problems, but Pokemon Scarlet & Violet has had a pretty rough launch. That's been reflected by its Metacritic score, which is the lowest a mainline title has been since Pokemon Emerald.

On Metacritic, both Pokemon Violet and Pokemon Scarlet sit at a critic score of 77. That's not a bad score by any means, but it is a pretty significant drop for the series, with its last mainline game, Sword & Shield getting an 80, and Sun & Moon getting 87. In fact, it's the second-lowest Metacritic score that the mainline Pokemon series has ever seen, only a single point ahead of Pokemon Emerald's 76 score. 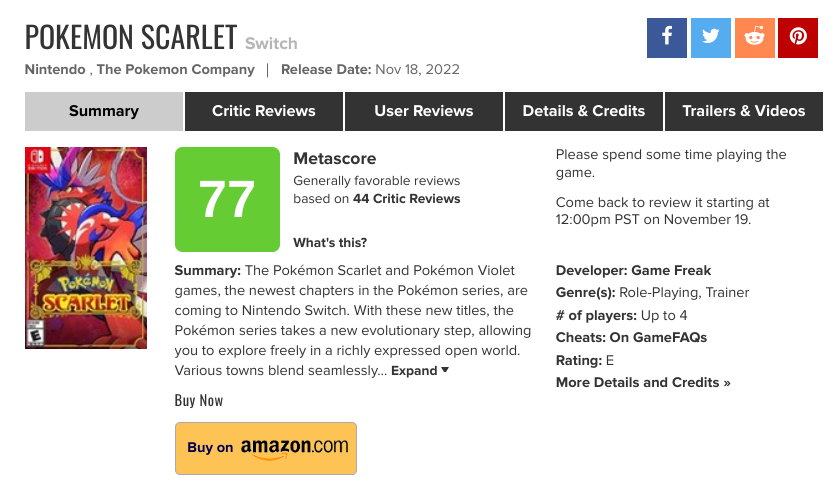 Even outside of mainline games, Violet & Scarlet aren't doing so hot as recent games like Legends: Arceus (which has an impressive score of 83) and New Pokemon Snap (which has 79). One of the more notable non-mainline Pokemon games that sit below Scarlet & Violet in its critic score is Pokemon Brilliant Diamond & Shining Pearl, which has a score of 73.

It's a shame to see Scarlet & Violet get so close to being the lowest-rated mainline entry considering its attempts to mix the formula up and do something new, most of which have actually been positively received. It's simply the poor state of the game upon release that seems to have dragged it so far down.

Later today, users will be able to start scoring Scarlet & Violet and considering how many problems have been reported with the games and that many players are trying to get refunds from Nintendo, it's looking likely to be a very low score. Of course, many of those user reviews are just going to be trolls and people trying to lower the score, but there are certainly going to be some genuine grievances in there.