Auroma Park is one of three playable arenas in Pokemon Unite, accessible when playing a Quick Match. Possessing the smallest team size of any map in the game, matches played here make for a unique experience.

This arena implements several features and mechanics that are exclusive to Auroma Park. Knowledge of how this map functions is key to maximizing your team's score and achieving victory. 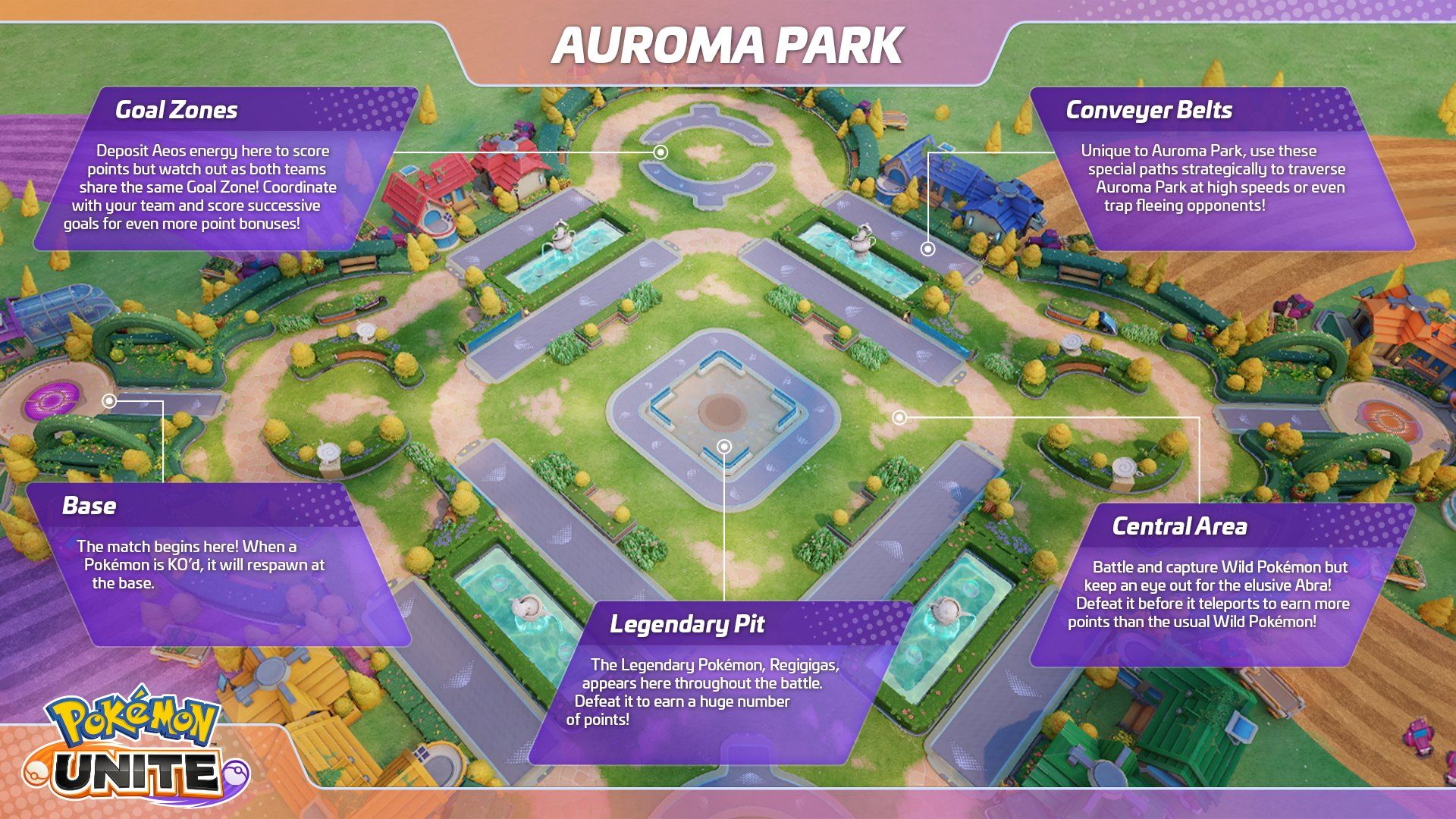 Matches played at Auroma Park require three players on each team, and last for five minutes.

Auroma Park is a square-shaped battlefield without defined sides for each team. There are two Goal Zones on this map, one in the top-left corner and one in the bottom-right corner, and both can be used by either team. At the start of a match and each time you get knocked out, you will spawn in your base located in the bottom-left corner, Your opponents' base is in the top-right corner.

There are conveyor belts throughout the battlefield, allowing you to quickly travel about the map. Take note of the arrows on each conveyor belt, indicating which direction it is traveling. You'll find these located:

The conveyor belt leading out of your team's base not only prevents enemies from invading, but also prevents you from re-entering this area. Unlike other maps, you and your allies cannot use your base to recover HP.

In addition to both Goal Zones being usable by either team, scoring on this map involves a unique mechanic. When your team scores in either Goal Zone, a double-point bonus will begin for you and your allies.

Lasting for 15 seconds, the timer on this bonus will be reset each time a member of your team scores, and will be canceled if an opponent scores in this Goal Zone. When double point Goal Zones are activated by either team, their location and remaining time can be seen on the in-game map.

Goal Zones in Auroma Park will not provide HP or shields to either team, like on other maps. That being said, players can recover HP upon scoring points in any Goal Zone.

Different berries can be picked up and consumed during Pokemon Unite battles, providing users with an instant boost. Two varieties of berries can be found in Auroma Park:

You will encounter a variety of Wild Pokemon in Auroma Park, providing your team with Aeos Energy and XP. You will see the following Wild Pokemon when playing at Auroma Park.

Additionally, Abra can be found in Auroma Park. Although possessing relatively little HP, this Pokemon can quickly teleport to a different location on the map, often making it difficult to secure. This Wild Pokemon provides you with 20 Aeos Energy and large amounts of XP upon its defeat, so make sure to prioritize this target when possible.

You will encounter Boss Pokemon in Pokemon Unite matches, powerful enemies that provide your team with various benefits if defeated. Information regarding Regigigas, Auroma Park's only Boss Pokemon, is provided below.

The Aeos Energy given, paired with this map's double point Goal Zone mechanic, allows teams to score after defeating Regigigas. Take note of the 30-second timer that appears on your map before it spawns, giving you sufficient time to group up with your team.

When playing matches in Auroma Park, it is important to take advantage of its numerous unique features and mechanics. Follow these strategies to increase your effectiveness and maximize your team's overall chances of success.