The 30+ Pokemon available to play as in Pokemon Unite are broken up into five categories, each responsible for a specific role. It's important to know what category each Pokemon falls into, and the responsibilities they have in each given role in order to achieve success in your Pokemon Unite matches.

The Defender Role is one of these five roles. These Pokemon possess low Attack and Speed stats but shine with their Defense and Endurance stats. Defender Pokemon are crucial to a team's survival, absorbing massive amounts of enemy damage and protecting their weaker teammates. When playing as Defender Pokemon, knowing what to do throughout a match is vital, potentially being the difference between a Victory and a Defeat for your team.

What Is A Defender Pokemon?

Defender Pokemon have high HP and Endurance stats, allowing them to take more damage than Pokemon that play other roles. The survivability of Defenders is balanced out by their relatively low Speed and Attack stats, leading these Pokemon to excel with the help of ally Pokemon who make up for these shortcomings, ideally Attackers.

As the role is an important one to the balance of your team, you must know how to properly handle different situations that may occur throughout a match.

What Defenders Are Expected Do 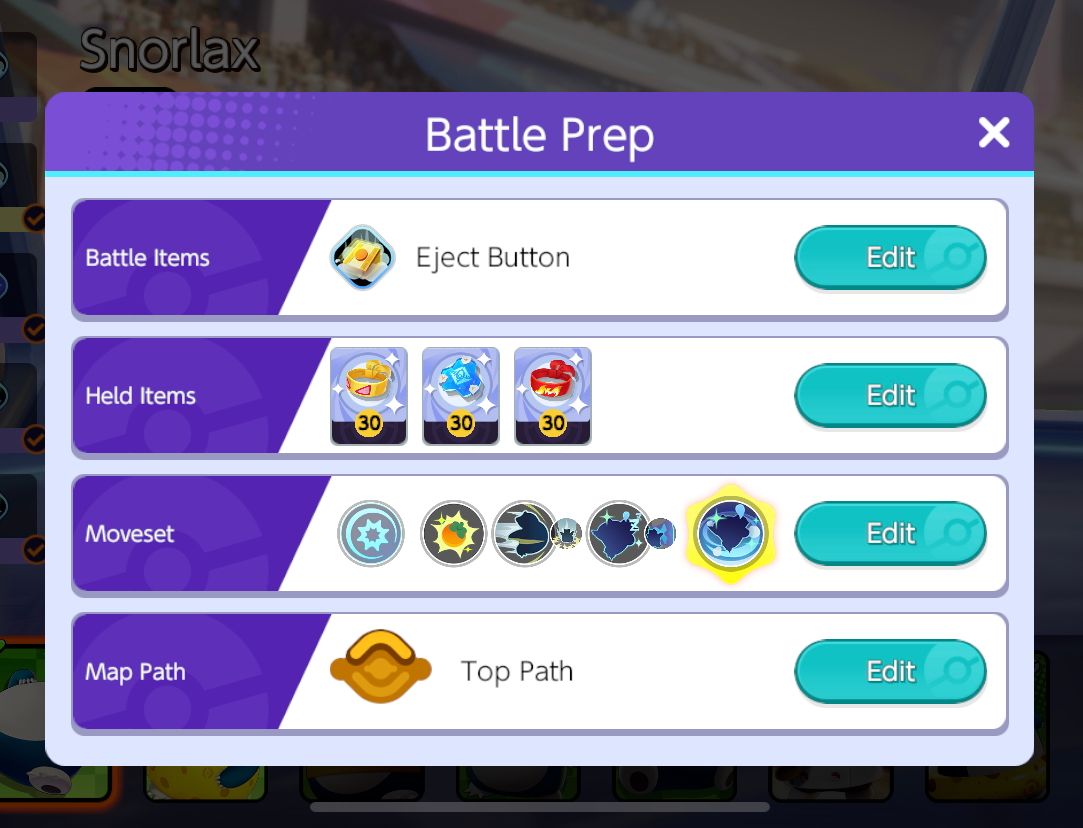 Given this survivability, the job of Defender Pokemon is to protect their teammates and Goal Zones. You should position yourself between the enemy and your teammates or Goal Zone when possible, tanking most of the enemy's attacks. The moves of various Defenders will slowly damage and stun enemies, but your more powerful teammates are expected to deal the majority of the damage in battles.

What Lane To Choose

Defenders should typically always go to either the Top or Bottom lanes, as this allows you to create effective partnerships with Attackers or All-Rounders. Given their lower damage output, Defenders aren't particularly effective in the Center lane. This choice also benefits Defenders' lack of mobility.

In short, you'll want to stick to what you do best – defend allies, block your lane from enemy pushes, and try to create scoring opportunities using the utility in your kit.

Make sure to group up with your team when contesting major objectives throughout the match (Zapdos, Rotom, Drednaw), as these help to secure XP and various benefits for your team.

Positioning is highly important for Defenders, as poor planning in lane can leave your teammates exposed. You'll grow in HP and tankiness as the game progresses and you level up, so make sure to assist your team to enable this. While you'll level up more slowly than your teammates, it's important not to fall too far behind your enemy counterparts.

There are currently seven Defenders that are playable in Pokemon Unite:

All Defender Pokemon typically follow a similar play style, so your choice will be more preference than anything. Take note of their move choices and what utility they bring to your team composition.

Greedent is one exception that you may encounter in terms of how you'll play. This Pokemon gains incredible Speed and Health Regeneration when using Covet or Stuff Cheeks, meaning Greedent has far more potential for scoring quickly before retreating to safety. It's a viable strategy, serving more as a distraction than a straight-up tank. Of course, you should still remember to aid your lane ally and group up when necessary.

When using this strategy as Greedent, equipping the Goal Getter Battle Item and Score Shield Held Item will both increase the damage that you can take before having your score attempt interrupted, as well as decreasing the amount of time it takes for you to finish scoring. 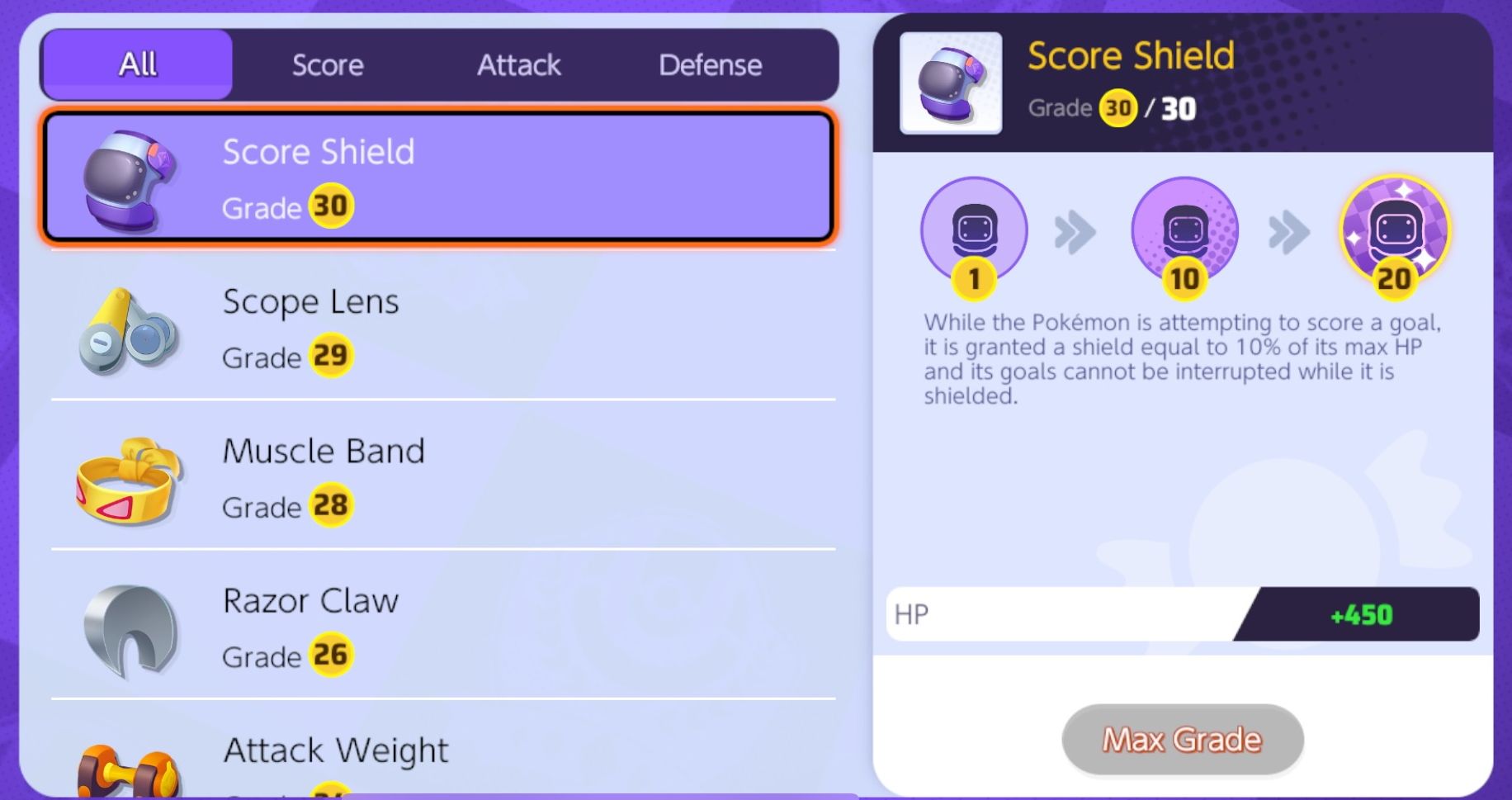 You can equip a Pokemon with up to one Battle Item and three Held Items. Although you can find success through the use of most items available, there are both Battle and Held Items that are especially effective when playing the Defender role.

Your choice of Battle Item is a matter of preference, each granting a unique ability to the user, but there are a couple that are recommended for the Defender role. The use of either the Eject Button or Slow Smoke helps the user escape danger quickly and safely, which helps counter the lack of mobility.

Your choice of Held Items plays a more significant role in the performance of your Pokemon. These items provide the user with various abilities, as well as stat increases, especially if leveled up. Although Defenders can equip items that boost their Attack and Speed stats, Held Items that improve their HP stats and survivability generally prove to be more effective. Examples of the most effective Held Items are provided below.

There are two important things to note about Held Items in Pokemon Unite. First, you need to reach Trainer Level 7 to unlock the second Held Item slot and Trainer Level 10 to unlock the third. Second, Held Items can be upgraded up to level 30 using Item Enhancer Tokens. Held Items' bonuses are improved upon upgrade and will grant additional stat bonuses at levels 10 and 20. These increases are shown in the format of "(Lvl. 1/Lvl. 10/Lvl. 20)" below.