Beyond its crafting and management aspects, Potionomics also features a wide variety of expressive, larger-than-life characters to interact with during your day-to-day adventures. Not only can you interact with them and even start a romance, but they also provide services for your shop.

Every character in Potionomics is great, thanks to excellent writing and animation work. Some stand out a bit more than others, though, whether that be due to their personality or how useful they end up being. This list ranks every side character from worst to best, but rest assured, they're all great and worth interacting with. 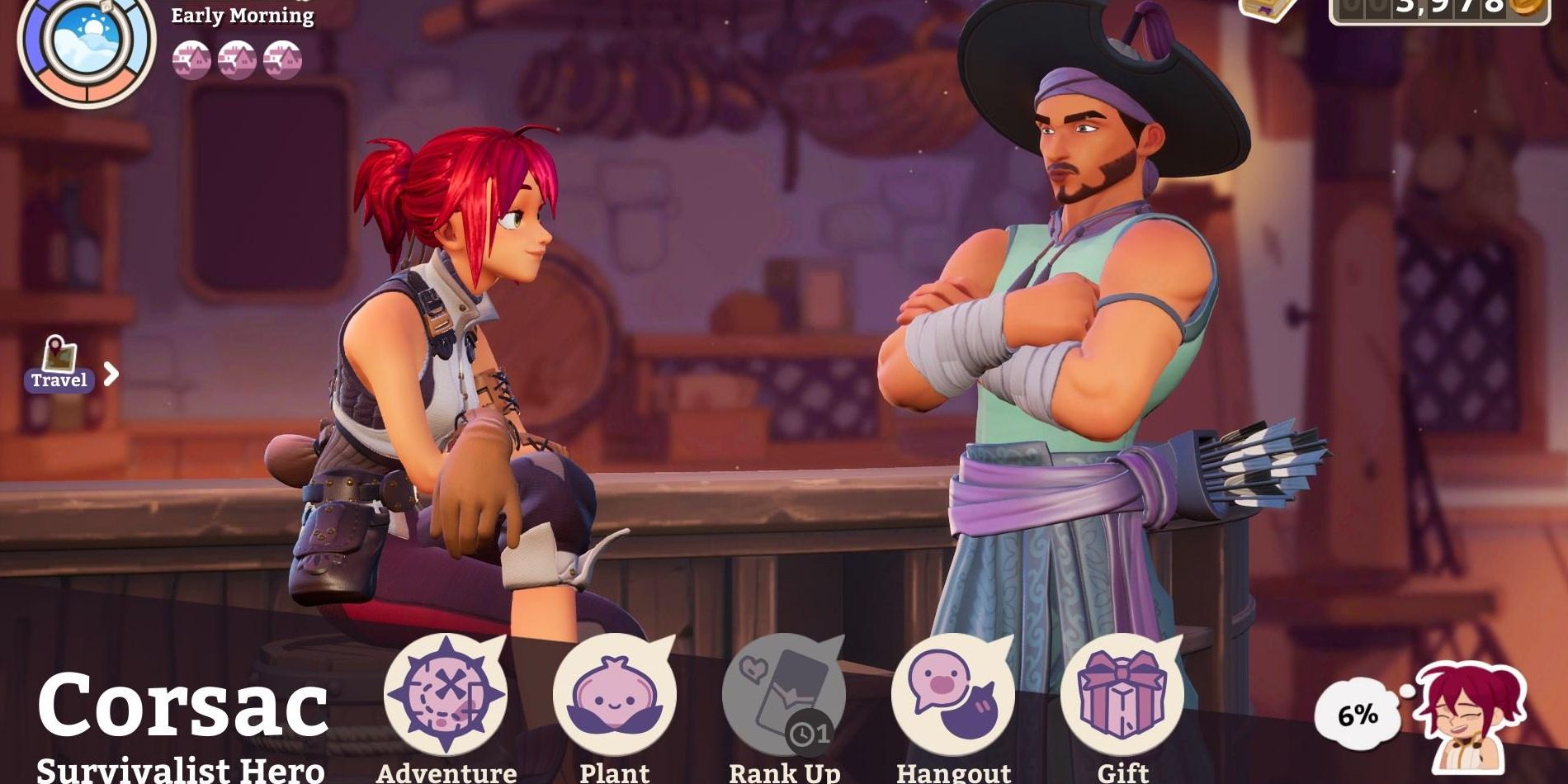 Corsac, the Survivalist Hero, is the second opponent you'll be facing in your competitions after Roxanne. He's a skilled hunter and adventurer who personally gathers his own ingredients for potion crafting, naturally making him a fearsome foe to face.

Once you get to sit down and talk to him, Corsac suffers a bit due to how late in the game he comes in. It's hard to spend enough time to get to know him. His shtick of imitating animals is always funny, though, and his large base health, inventory, and capacity for potions makes him an excellent adventurer. 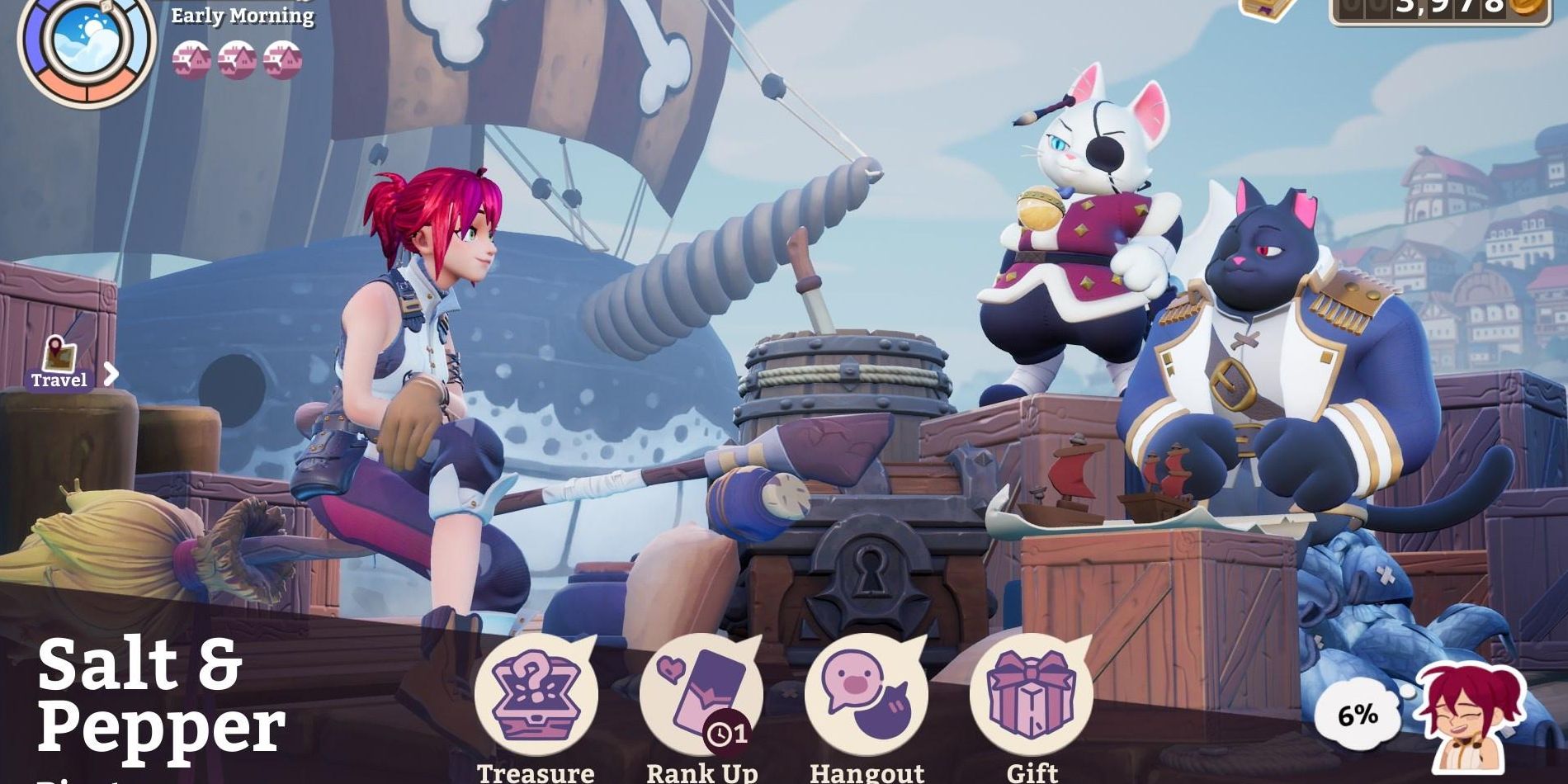 This pair of cat pirates come in a bit later in the game. Once you've unlocked them, you can spend a fair bit of money to get a cut of their treasure haul. Besides that, Salt and Pepper are a rather hilarious duo, with Salt doing most of the talking and constantly hyping up the bigger, but more shy, Pepper.

Salt and Pepper are an excellent duo, but the fact that they're attached at the hip does hurt their individuality a bit. They're also the only characters in the game you can't romance, instead becoming "blood brothers" with Sylvia should you pick the right options. The concept of cat pirates is too great to ignore them, though. 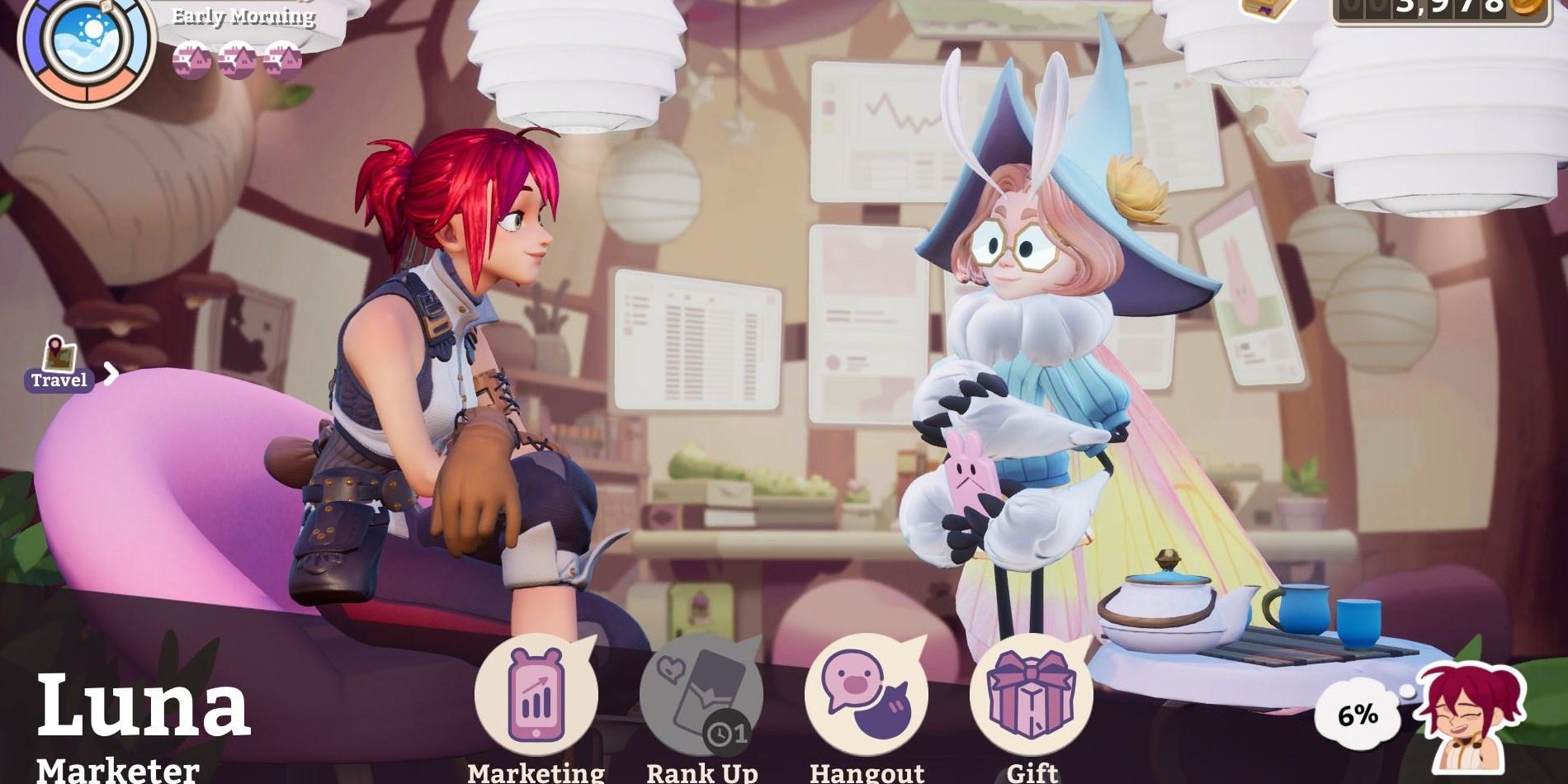 Luna is a four-armed moth woman who you'll meet fairly early on. Through her marketing, she can increase the price of certain potions in the upcoming days, which is a huge plus. Character-wise, Luna is almost like a modern-day influencer. She's constantly on her phone and hunting for new clients.

She might sound a bit stereotypical, but her enthusiasm and charm is infectious, not to mention her adorable design. Her biggest problem is that the cards she gives you are difficult to work with. They encourage you to have high stress, but doing so can often make your life much harder. 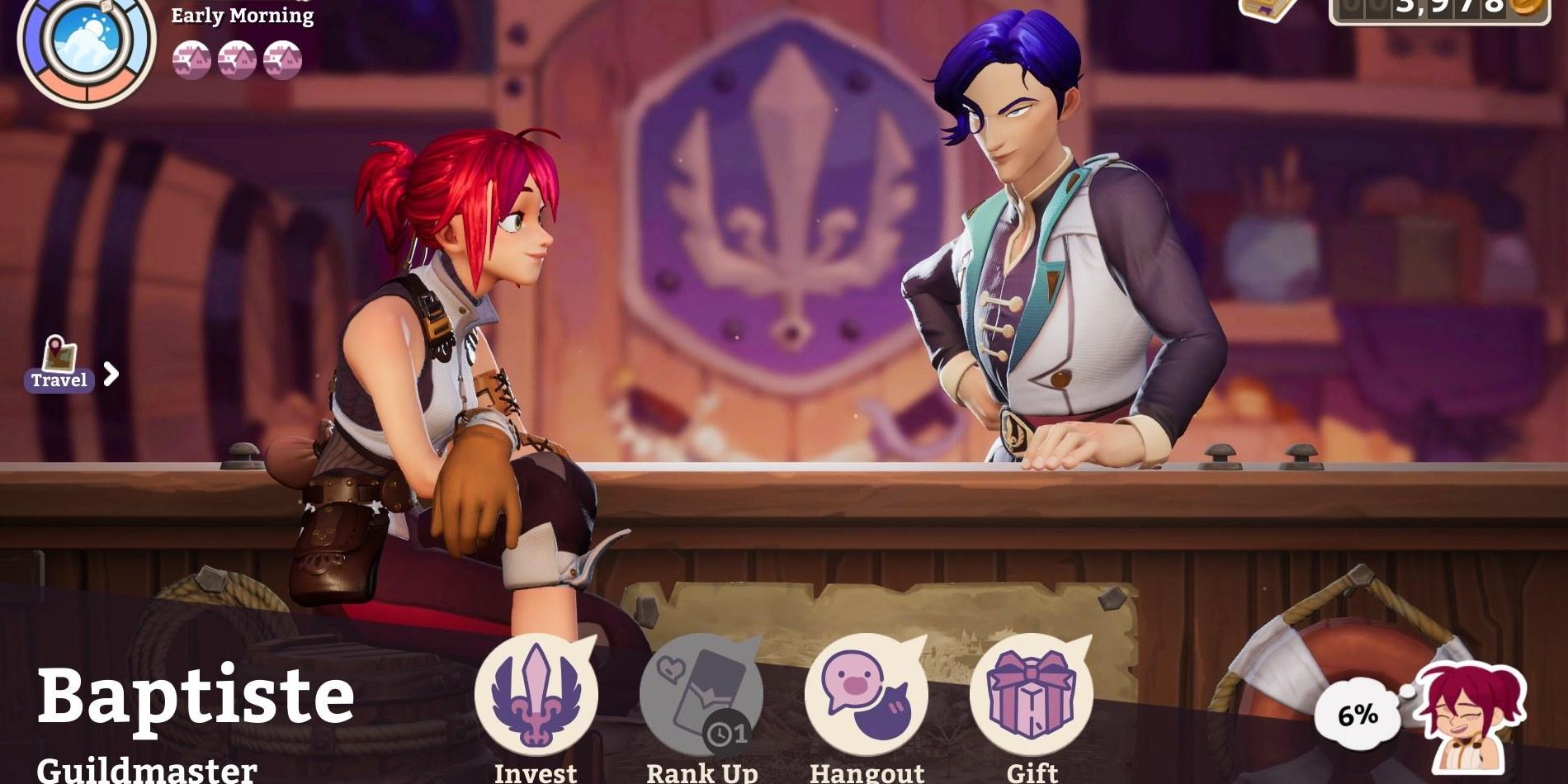 As the current administrator of the Heroes Guild, Baptiste brings flair and flamboyance wherever he goes. He'll allow you to invest in the expeditions of his heroes, which has a good chance of rewarding you with rare materials. His cards, some which allow you to restore the patience of your customers, are extremely strong.

Baptiste is an incredibly fun presence, and he's always worth spending some time with. His naïveté is charming without ever being annoying. His expeditions, though, are prohibitively expensive and rarely feel worth the cost. You're often better off investing in your actual adventurers. 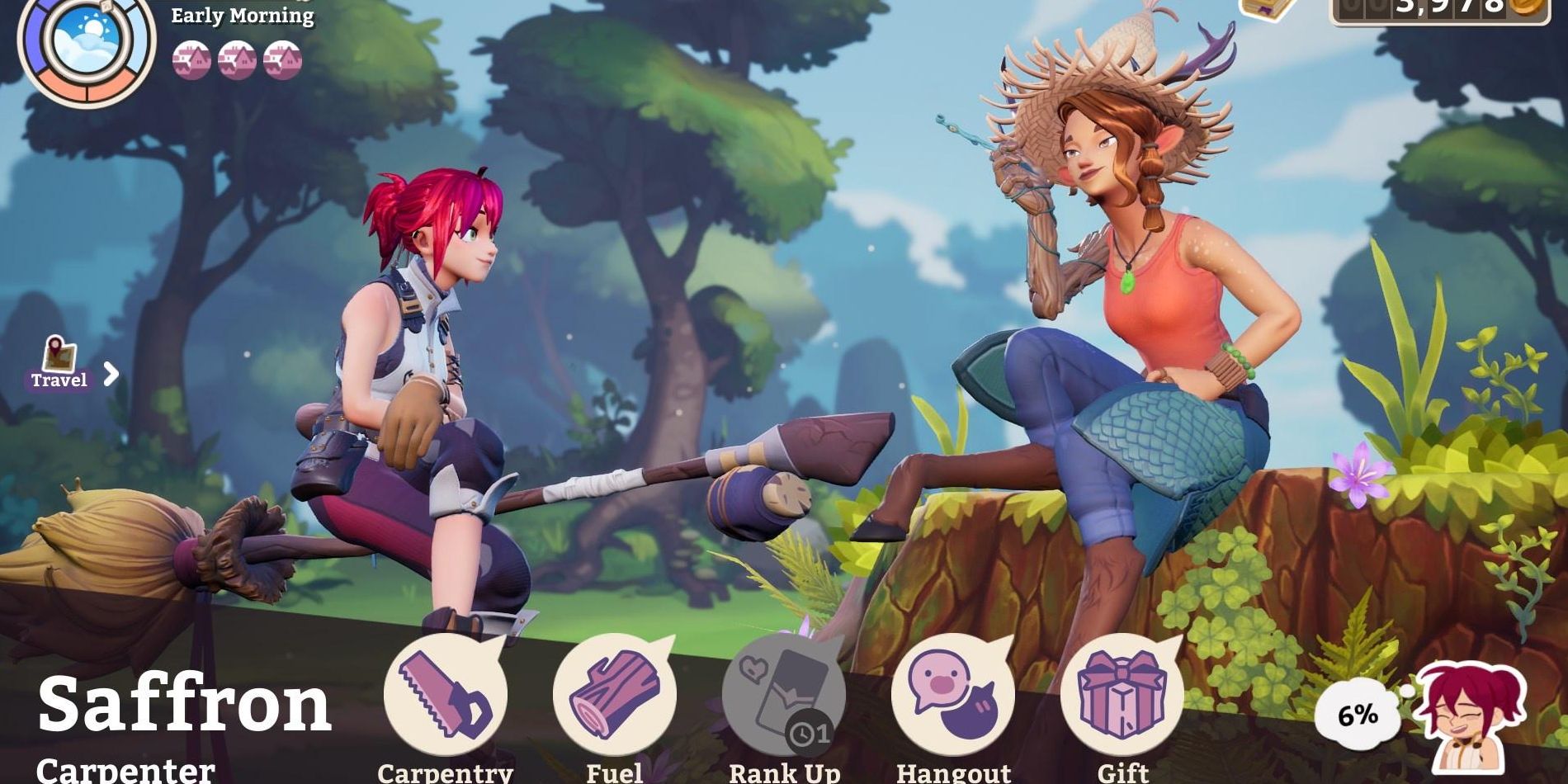 Saffron is a forest hermit carpenter who Sylvia meets while out in the woods. She's a chill, relaxing woman to be around, and her cards reflect this by focusing on decreasing your stress. As you encounter tougher and tougher customers, you'll find these cards to be invaluable.

Even more invaluable, though, is the services Saffron offers to you. As a carpenter, she offers increased space in Sylvia's shop for shelves and potions. As you need to ramp up your potion and money-making schemes, Saffron's services will be the most important. Just be warned of how expensive they are. 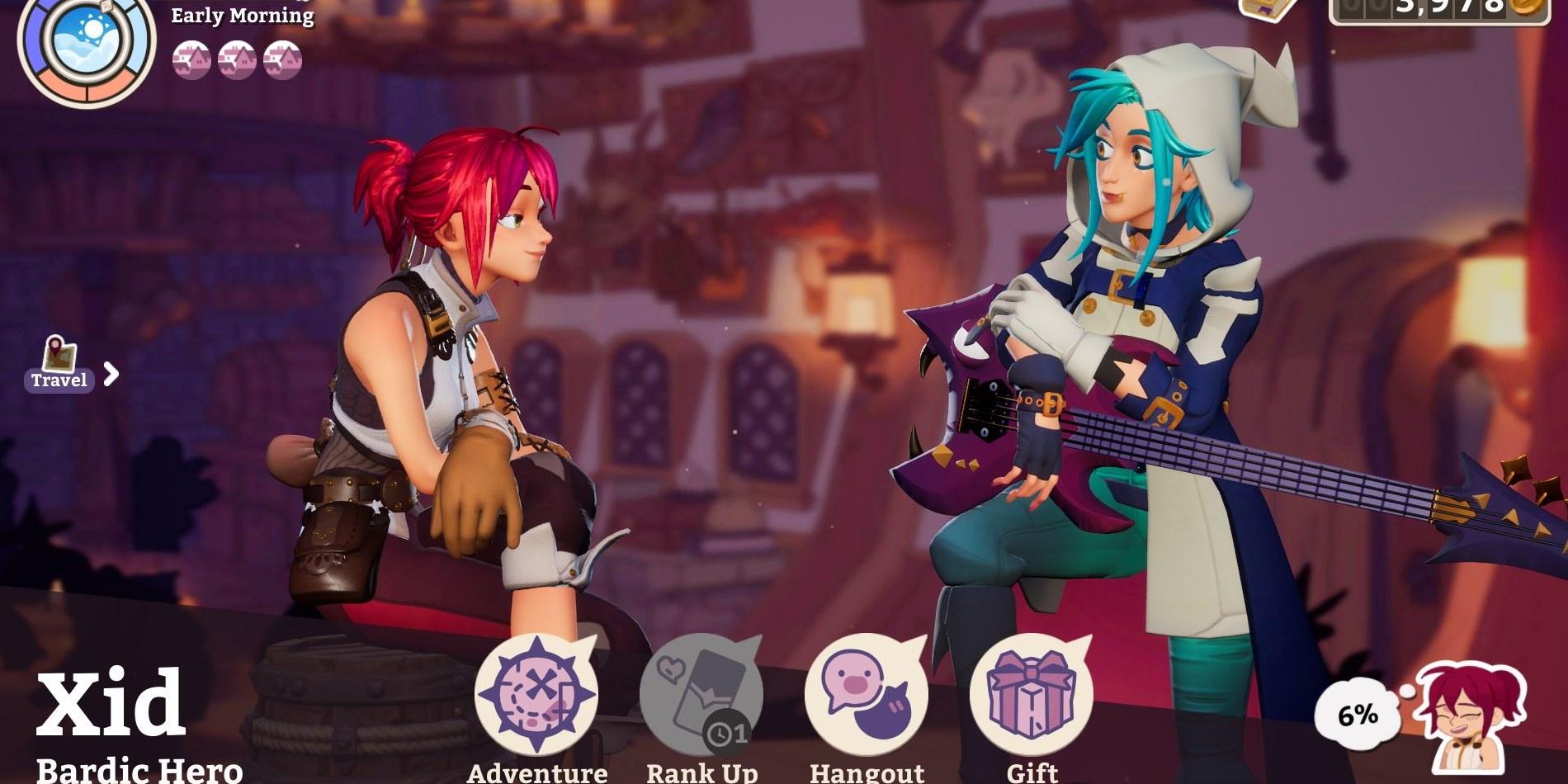 World-famous superstar by day, experienced adventurer by night, Xidriel is the second adventurer you'll meet after Mint. She boasts a higher starting mana pool, allowing you to focus more on boosting her health and other statistics. This gives her a big boost over Mint, whose base stats are nothing to write home about.

Otherwise, Xid is just a cool character to hang around with. Sylvia is a big fan of her, and you'll likely become one too as you learn about her dual identities. She boasts a number of interesting cards, such as Chorus, which starts weak but becomes stronger the more you play it in one encounter. 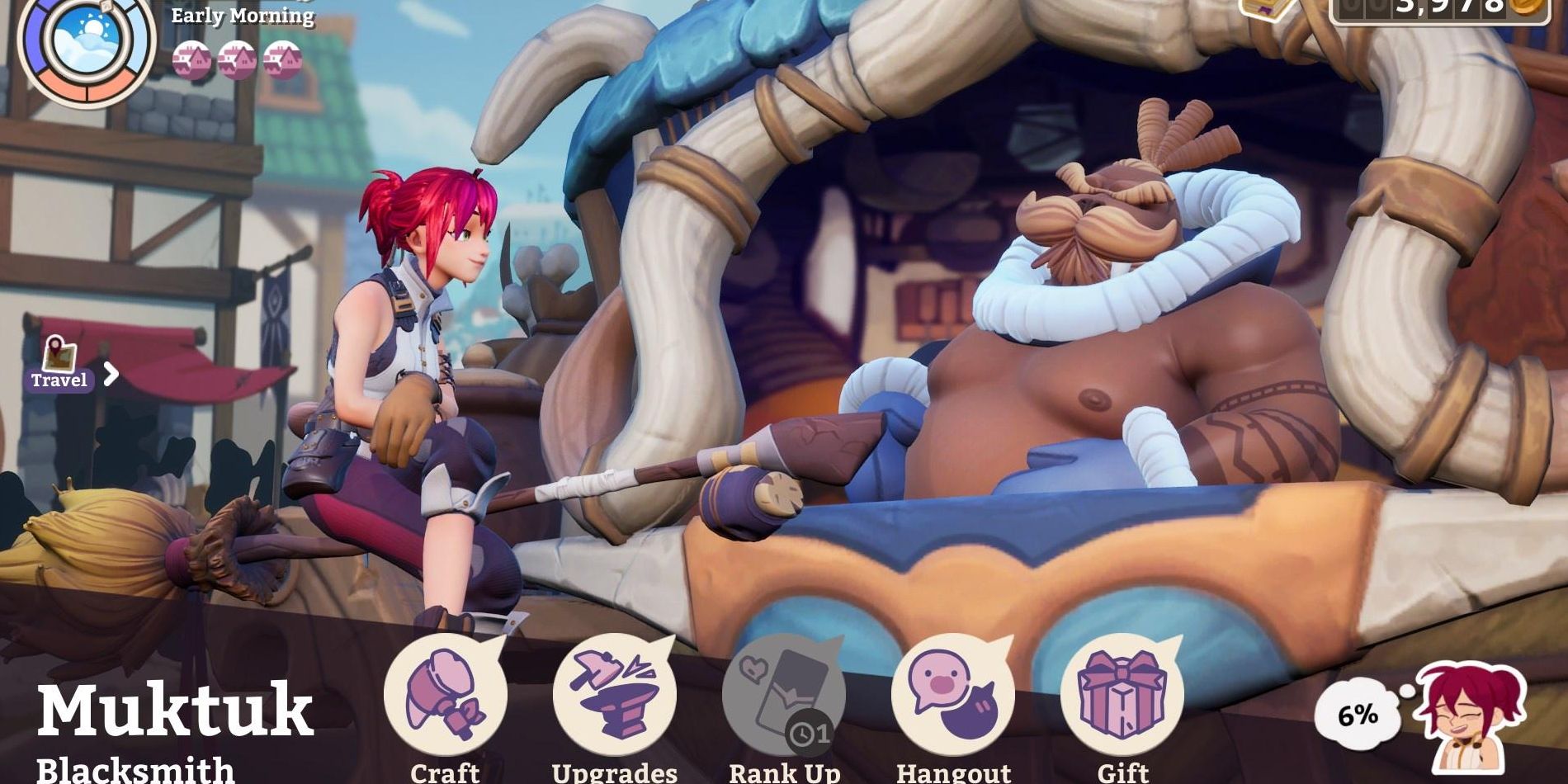 The walrus craftsman Muktuk is boisterous, confident, and all around a ton of fun. Less arrogant and more just totally confident in his abilities, his storyline sees Sylvia helping him come up with his great work that will be remembered for generations.

Thankfully, Muktuk lends his talents to you, and they're invaluable. For a price, he'll give you the cauldrons and shelves you need to make and sell your potions. His cards focus on buffing you up to deliver one massive strike all at once. All in all, he's not only a great character, but an incredibly useful one. 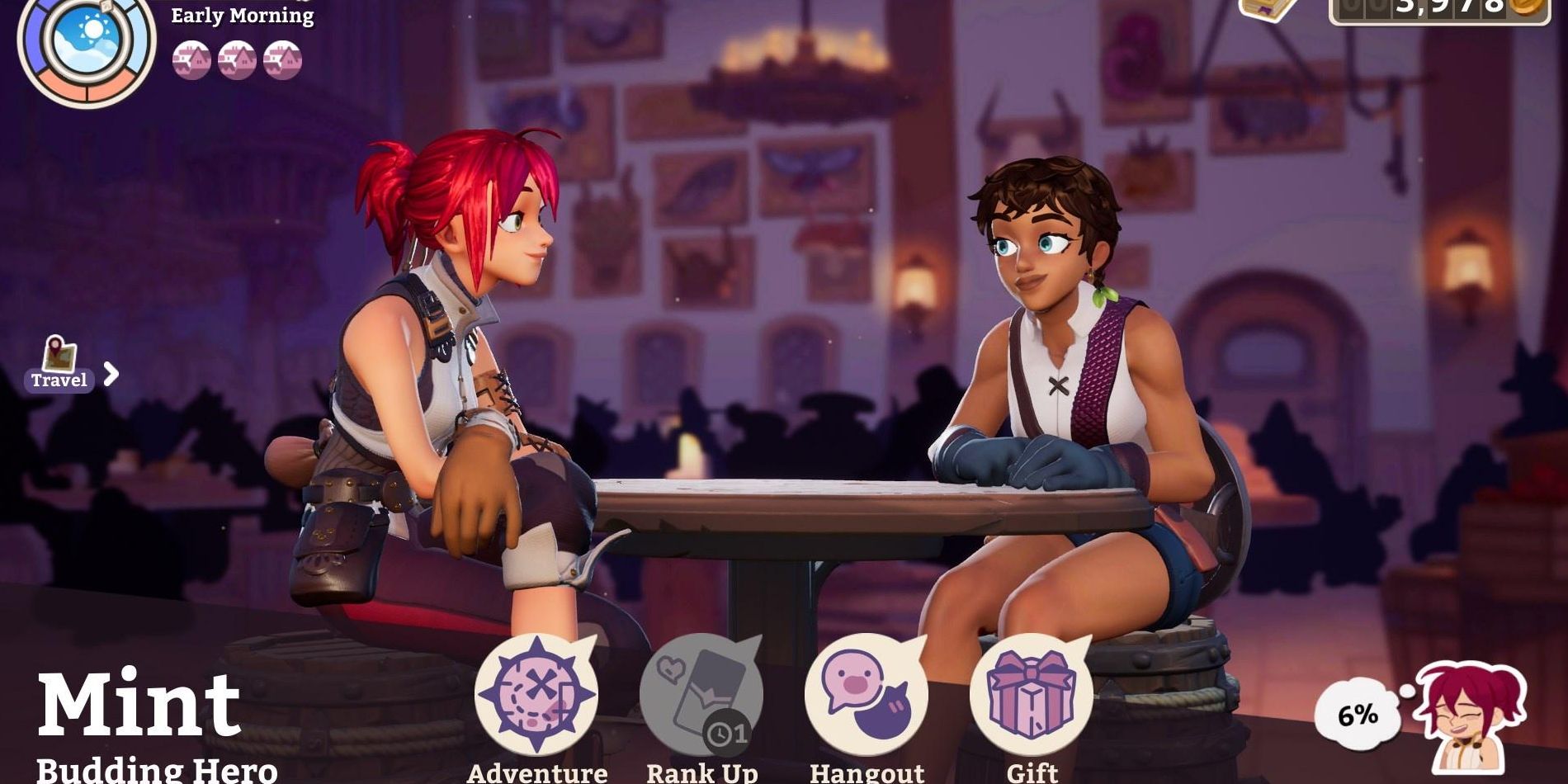 Mint, as the first adventurer you meet, doesn't quite have the base stats of Corsac or Xid. What she does have is a winning personality, great potential as she levels up, and some incredibly useful cards that can both defend you and dish out damage.

Mint is a total adventurer fangirl who wants to prove herself a great hero in her own right. Her magnetic personality will make you want to come back again and again just to see how far along she's progressed. Frankly, it's also just nice to see a female character who has actual muscles. 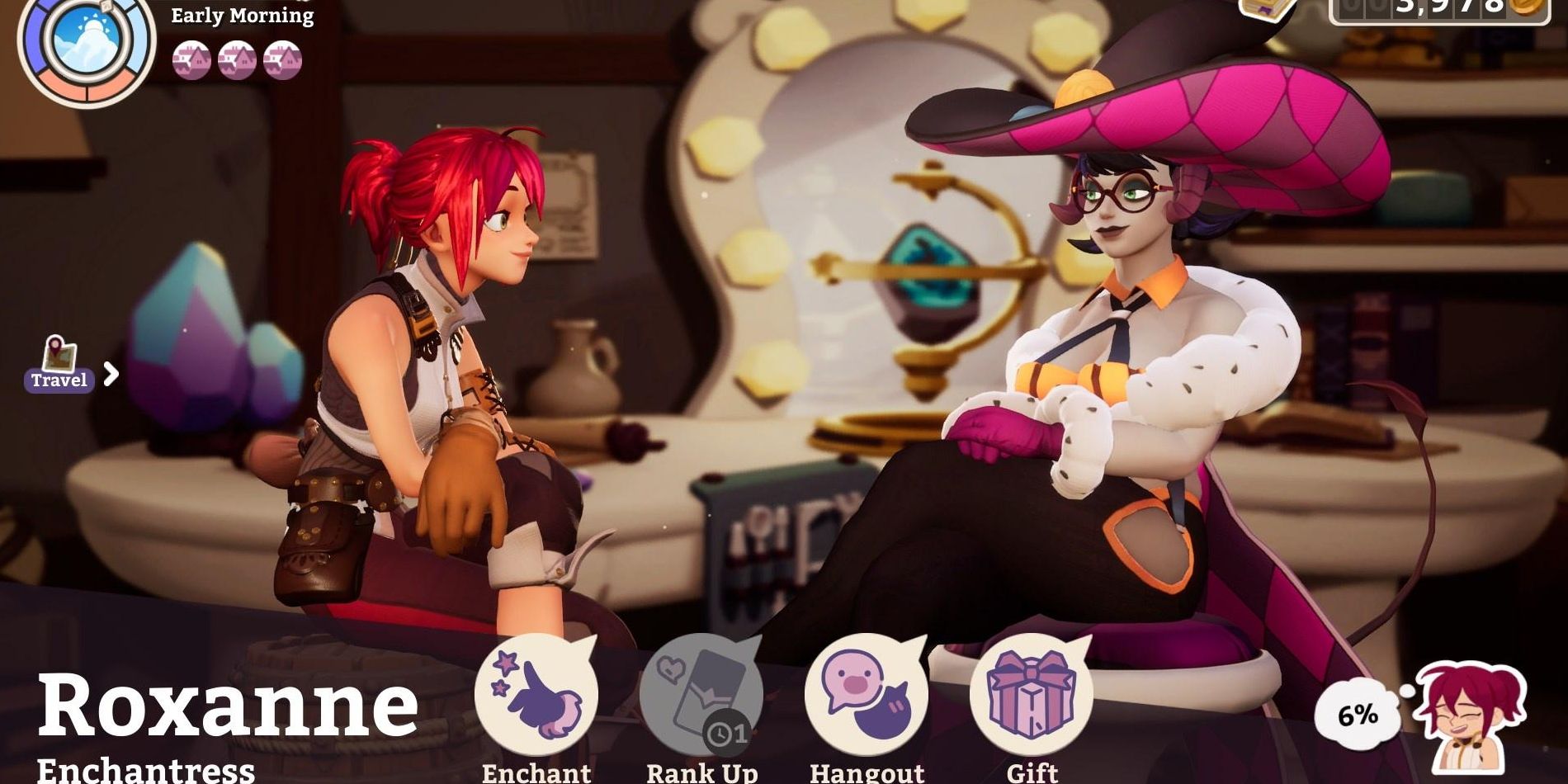 As the first rival you meet, Roxanne is an unashamed jerk who constantly picks on Sylvia with taunts. After outing herself as a demon, though, Roxanne takes refuge in Sylvia's basement, where she offers magical charms that can sway how your customers feel about your potions.

Roxanne is always fun to interact with her, and her banter with Sylvia is excellent. Watching her try to resist her demonic urges to try and become a reputable businesswoman is a genuinely interesting arc. Nobody would blame you if you chose to romance her. 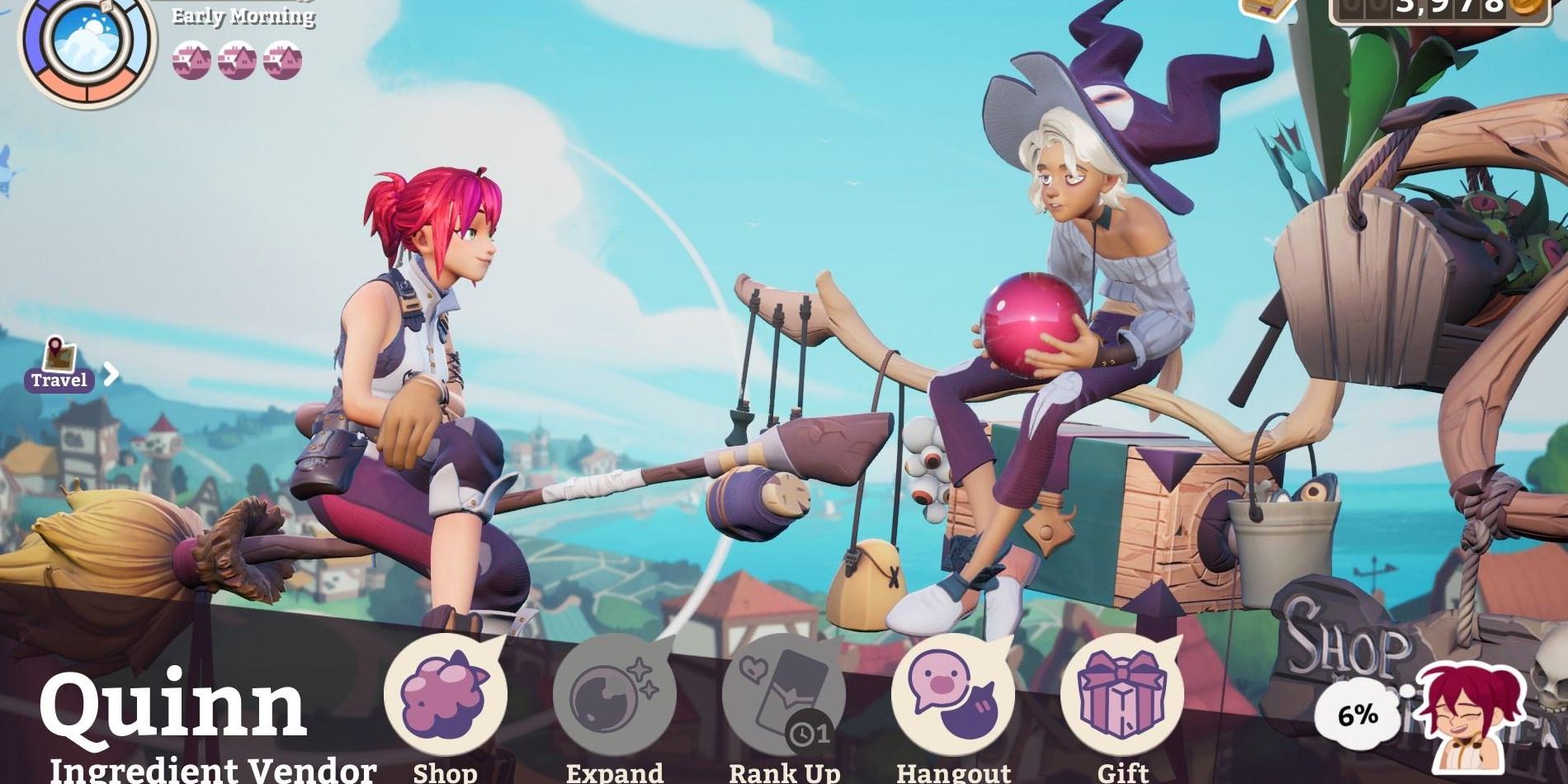 The nonbinary witch Quinn runs the ingredients shop, which is probably the single most important location in all of Potionomics. Through Quinn, you'll buy the vast majority of the ingredients you'll need to make potions, while feeding them new ones that they'll later add to their stock.

Not to mention how useful their cards are, which allow you to rapidly cycle through your deck and look for new cards. Even more than their usefulness, though, Quinn is just a genuinely fantastic character. They're snarky and constantly tired, but also have a lot going on under the surface.