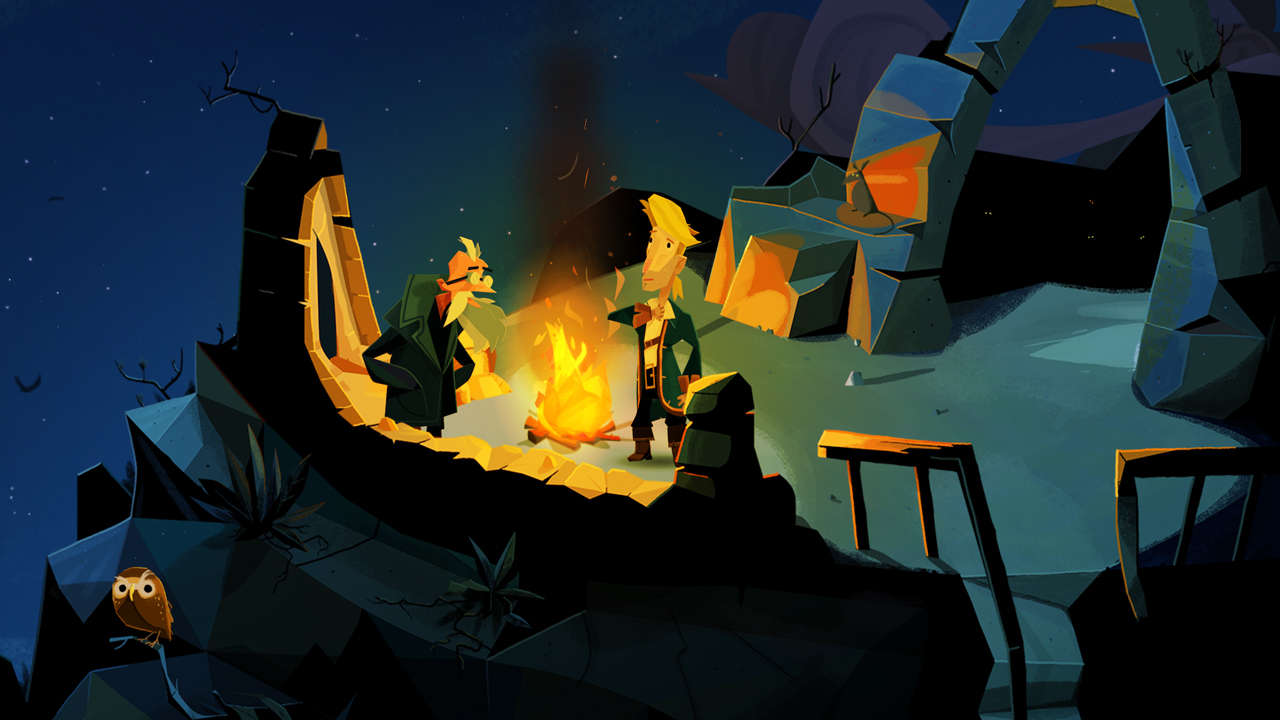 When you’re dealing with video games of all eras on a daily basis, nostalgia doesn’t often grip you quite the way it does other people – who might suddenly see a beloved game for the first time in 30 years, without having ever thought about it once in the intervening time. We’re not in quite that position when it comes to Monkey Island, but it’s certainly a long time since we’ve played any of the originals, and this return to the golden age of piracy, and graphic adventures, has been a real treat.

Although the last entry wasn’t that long ago, with Telltale Games’ okay-ish Tales Of Monkey Island, it’s the first three entries in the point ‘n’ click series which are the most revered. The first two were directed by Ron Gilbert, with Dave Grossman acting as designer/programmer (along with Double Fine’s Tim Schafer). The third entry, The Curse Of Monkey Island, didn’t involve any of the original creators and while it was surprisingly good it ignored the weird theme park ending of the second game and carried on very much like a Pirates Of The Caribbean game before there was ever a Pirates Of The Caribbean movie.

The comparisons with Disney’s pirate franchise are not skin deep, as the first three Monkey Island games are not only definitive examples of the graphic adventure genre but they’re also very funny. They’re all essentially comedies, which is an achievement not to be underestimated given the general quality of video game script writing in the 90s and the fact that even today video games are very rarely intentionally amusing.

The fact that Disney now owns Lucasfilm had many assuming that Monkey Island would never be seen again, since you’d imagine one comedy pirate franchise was enough for anyone. To their credit though, they were not only happy to licence out a cameo in Microsoft’s Sea Of Thieves but they’ve also engaged the services of Gilbert and Grossman to make a new sequel.

The end result is Return To Monkey Island, a quasi-soft reboot of the series that is both a direct sequel to Monkey Island 2 but also acknowledges the better parts of the other games.

There’s a lot of history behind Monkey Island but that shouldn’t put off anyone that has never heard of it or has never played a graphic adventure before. The whole point of both is that they’re very approachable and require nether previous knowledge nor any kind of arcade skills.

The intro to Return To Monkey Island is a bit peculiar, given how surreal and unexpected the ending of Monkey Island 2 was, but it quickly settles down into series protagonist Guybrush Threepwood recounting an untold encounter with the ghost pirate LeChuck.

Guybrush, again voiced by the wonderfully charming Dominic Armato, is neither swashbuckling hero nor loveable loser, but somewhere in between. He starts the game still married to his beloved Elaine but frustrated that he hasn’t yet learned the secret of Monkey Island, and yet LeChuck is organising an expedition to resolve the issue once and for all. As such, your immediate goal is to surreptitiously join his crew and beat him to the punch, although absolutely nothing is ever that simple.

There are two obvious reasons why graphic adventures like Monkey Island fell out of fashion, the first being the fact that they don’t feature any traditional action. Telltale Games and series like Life Is Strange are part of the same evolutionary tree but heir own interactions are solely through dialogue and simplistic QTEs. The full fat experience of a graphic adventure is that plus genuinely difficult logic puzzles.

The problem with selling such a game today is not just that people don’t like to get stuck but that when they do, they can instantly get the solution on their phone. There’s nothing Return To Monkey Island can do about that, so it essentially ignores the issue, offering a tiered in-game hint book for those that don’t want to resort to YouTube and offering a choice of easy or normal puzzles when you first start the game.

Even if you choose the latter they’re never quite as hard as the original games but they are proper puzzles and it’s not long before you’re scratching your head, trying to work out how a monocle and a pile of crackers can possibly help you break into a pirate museum.

Being a timed console exclusive for the Switch may seem odd at first, but with a controller this is technically not a point ‘n’ click adventure and you’re forced to use a slightly fiddly control system based on navigating between hotspots. If you play in portable mode though you can use the touchscreen, which works much better than it ever will on Xbox or PlayStation.

The game isn’t a graphical powerhouse but it’s nowhere near as ugly as some of the screenshots suggest. The angular artwork, by the same artist behind the excellent Knights And Bikes, wouldn’t have been our first choice but Monkey Island has had almost as many art styles as it has sequels and it quickly grows on you. Especially as you realise the characters are actually 3D models, and there’s a surprising amount of facial animation in close-ups.

The important question with Monkey Island is not what it looks like but whether it’s funny. And the simple answer to that question is that it is. You’re not going to be in danger of losing any ribs over it but it’s consistently, gently amusing, with a knowing sense of humour that pokes fun at everything from itself and video games in general to Star Wars and the banality of corporate greed.

Despite making his first appearance in the third game, Murray the talking skull is still in the game, and remains a highlight, but there are also lots of new characters that shine, as well as returning foes and allies, most voiced by their original actors. You might not ever be laughing out loud but the whole thing is so warm-hearted and endearing it’s impossible not to fall in love with it whether you’ve any experience with the series or not.

If there are flaws it’s that it perhaps overstays its welcome by an hour or so, with some puzzle templates being needlessly repeated and a bit too much busywork towards the end, but by that point you’re completely sold on the whole experience.

Return To Monkey Island has no daring solution for making graphic adventures popular again, and no shocking deviation from the genre’s long-established formula; it succeeds simply by being well written and cleverly designed. Without any unnecessary gimmicks, it makes it very clear why the concept and franchise was popular in the first place. So much so that it now seems a crime that we were ever away from Monkey Island this long.

In Short: A hugely successful reboot for the beloved point ‘n’ click adventure, that achieves its comeback without sacrificing either its sense of humour or some enjoyably tricky puzzles.

Pros: A wry and enjoyable script full of charm and whimsy, and some great voice-acting. Proper puzzles, with some very useful in-game help systems. Just the right level of nostalgia, without getting cloying.

Cons: Some puzzle types are repeated and the number of quests within quests can get daunting. Consistently amusing but never laugh out loud funny.