With the Civetta Summit, Rollerdrome just keeps upping the ante. Unlike the stages that came before it, Civetta Summit is really three smaller arenas linked by ramps and rails. On one hand, this does make it pretty dang cool, but on the other, it means that you will have to be seamlessly transitioning through these three distinct areas in order to keep that combo counter running strong.

Thankfully, this is a summit that we have already surmounted, and we are more than happy to let you in on all the tricks for beating this alarming arena. Naturally, we will also take you through all the challenges and help you conquer Morgan Fray's high score. 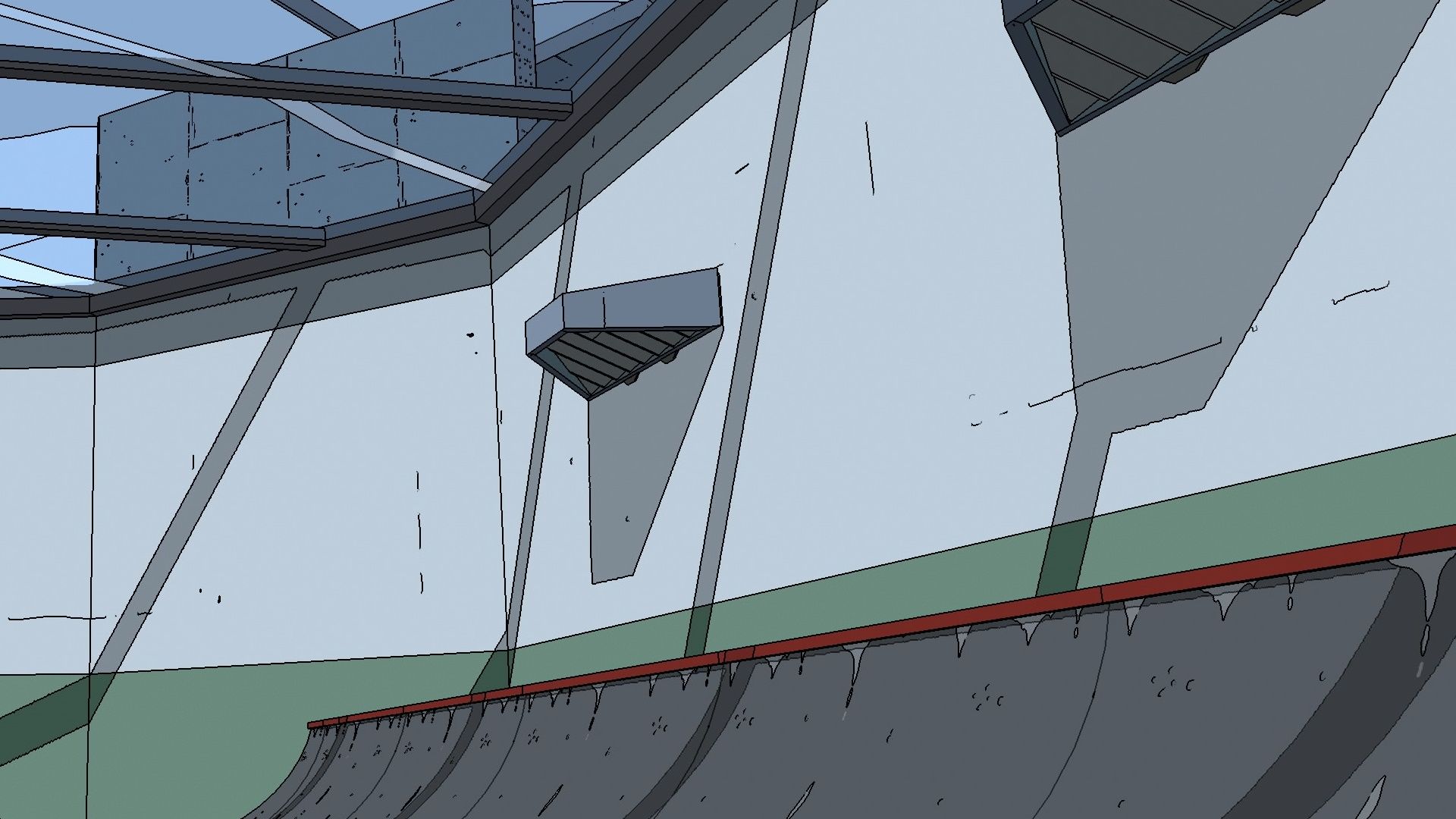 As we mentioned in the intro, Civetta Summit is divided into three sections. The first segment is essentially a large bowl with a pyramid ramp in the middle. However, it is missing one section, and in its place is a gap. Along the gap is a series of ramps that will take you to either of the two other areas. To the left, behind a wall of windows, is a room that has a quarter-pipe as well as ramps that lead directly to the other two sections. You can reach this room from the first area by ramp or rail, both are provided. The final area is similar to the first, but one section of the rail is interrupted by a sniper tower. It has ramps that lead directly two both of the other areas.

As you can probably tell, each area feeds into the other two. So, you are never far from where you want to go. And, unsurprisingly, this will be necessary, as enemies will pop up in all three spaces throughout the different phases of this stage. 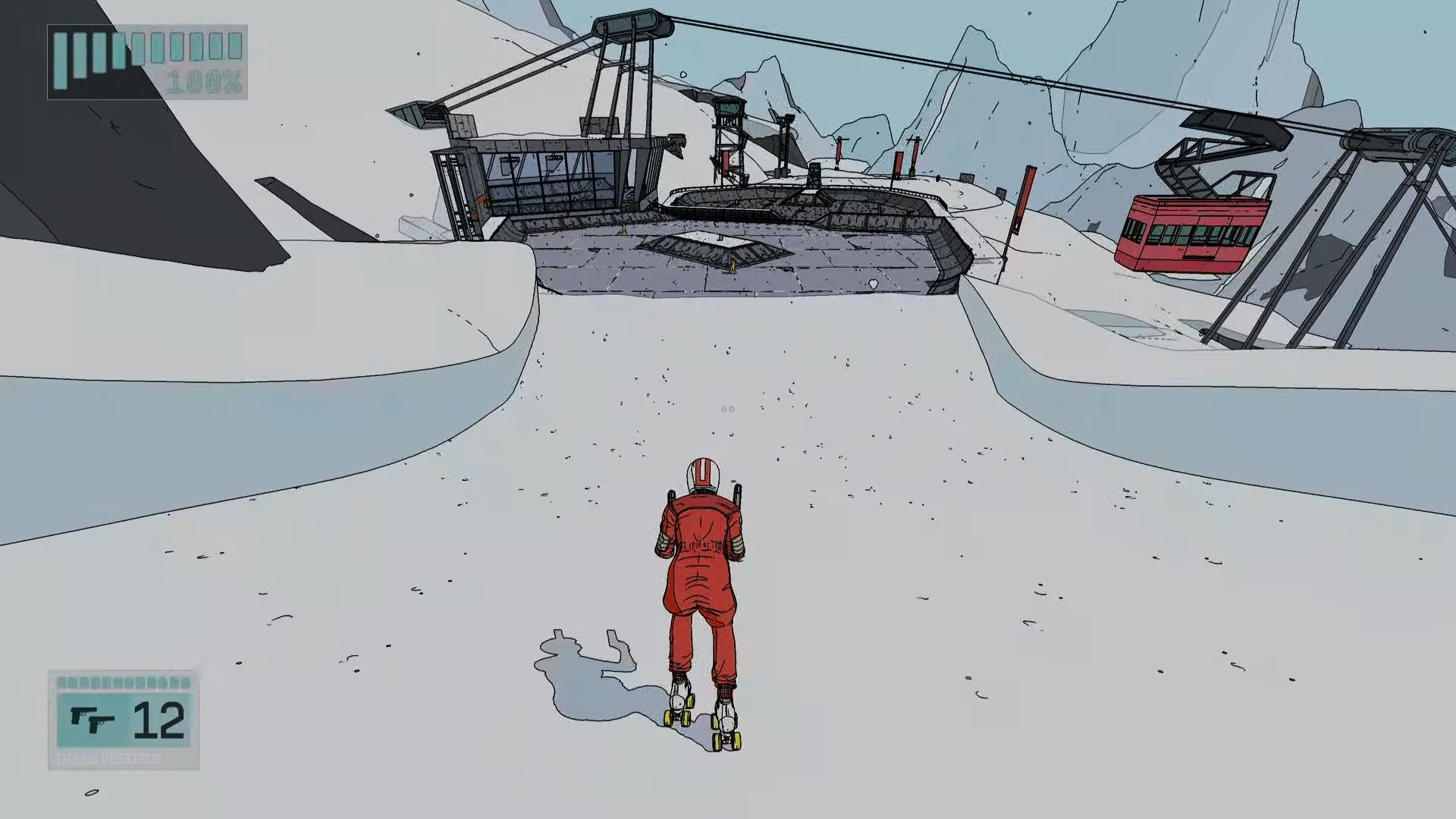 Civetta Summit is probably the first time where none of the challenges are gimmes. There are still a few that are basically here to just reinforce what you were previously taught (specifically in regards to your Shotgun), but you will have to tackle this stage with intentionality in order to complete the majority of these challenges. 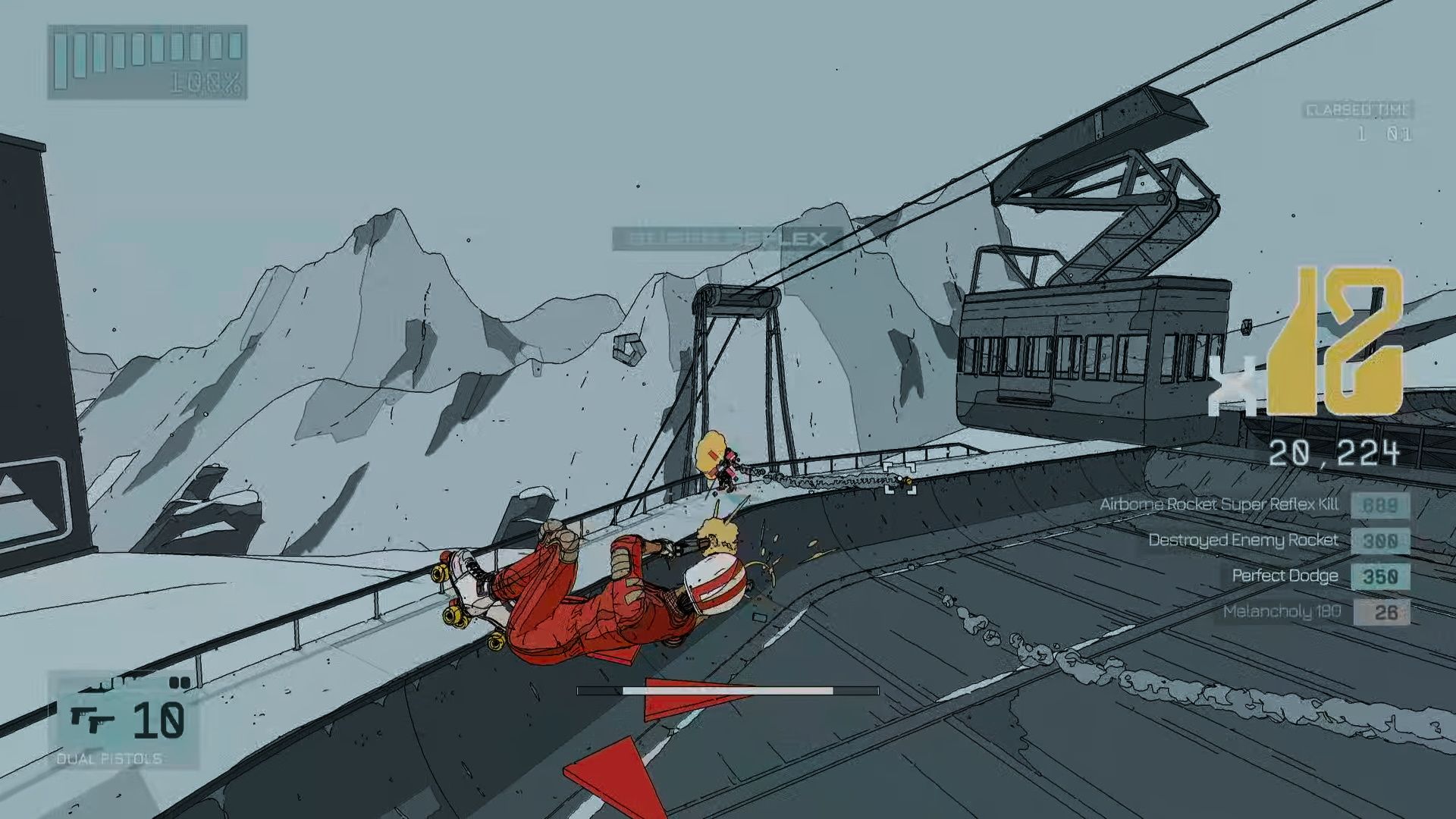 The Warheads are the rocket-firing foes you faced in Pike's Canyon. It is easy enough to take them out using your Dual Pistols (in fact, we would argue it is the preferred method), just make sure you have a full ammo clip before you engage them. As long as you don't stop firing, you will be able to take these goons out before they can raise their shields. 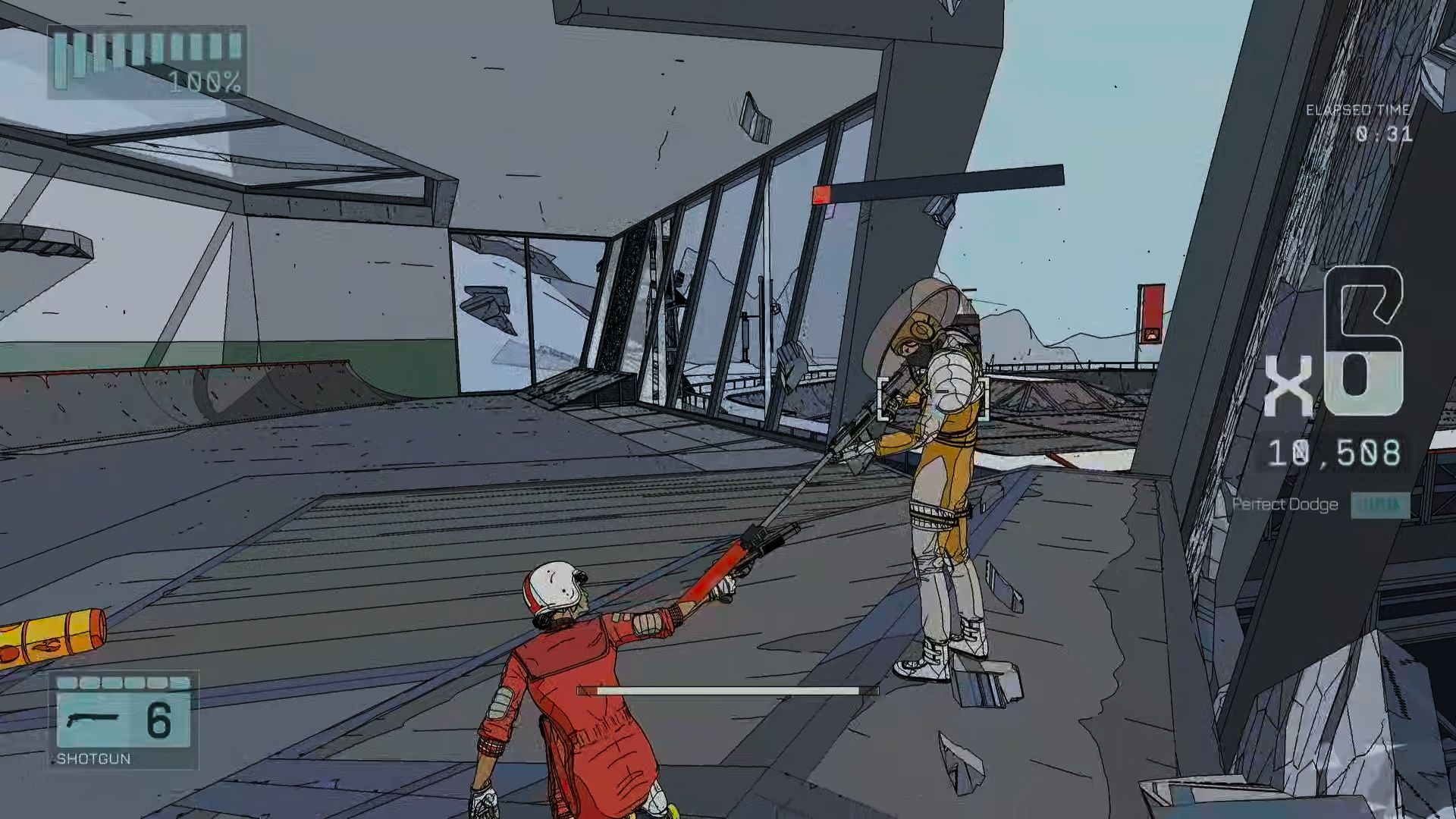 This stage is proceeded by a Shotgun tutorial, so you will know how to use the Slug Shot (just fire when the two bars align in Reflex Mode). This challenge seems to be here to encourage you to try out your new weapon. The Shotgun isn't an ideal weapon for taking out the Warheads, but it will make quick work of everyone else.

If you are really struggling to hit the Slug Shot, you can make it automatic in the options menu. 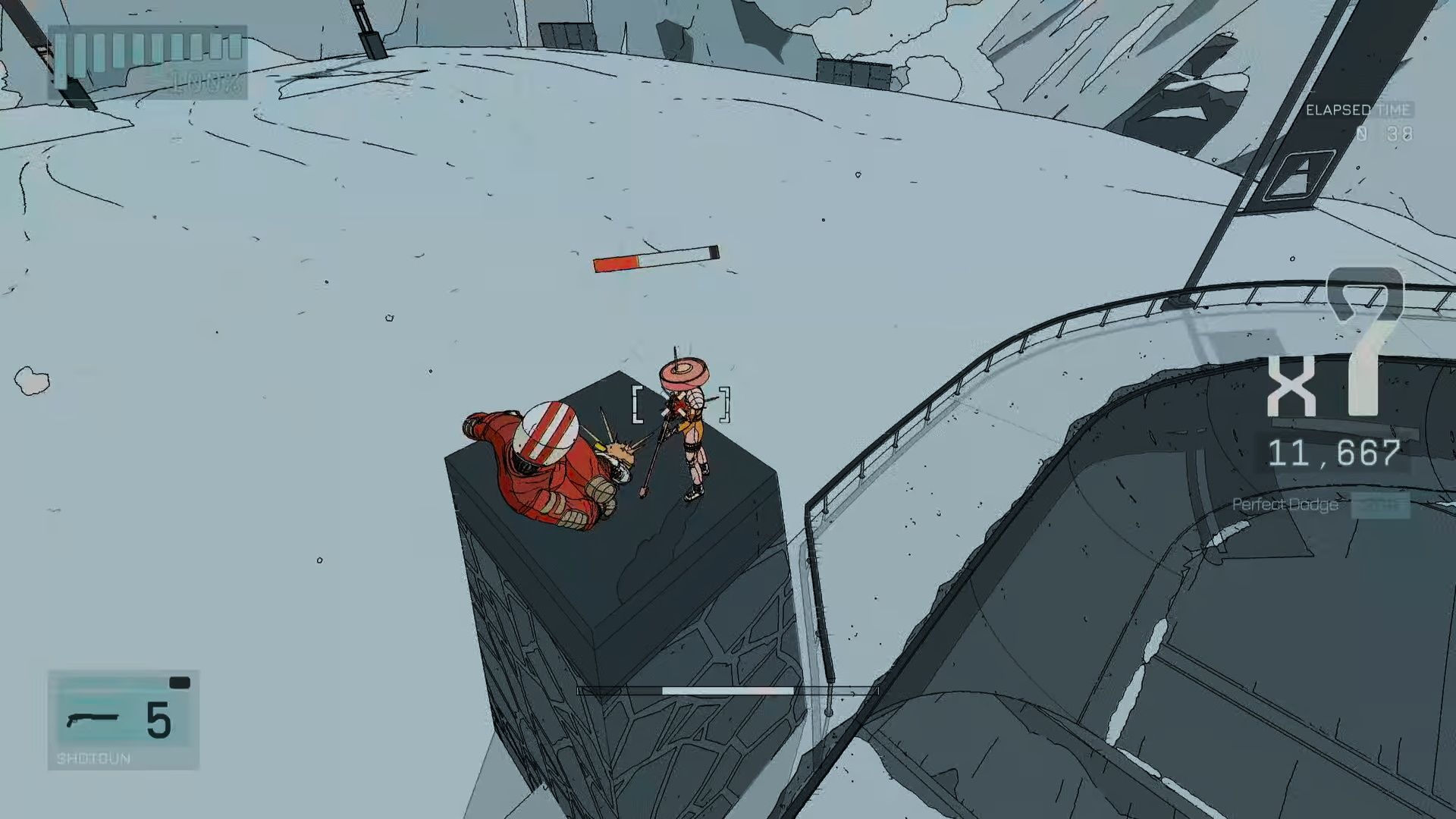 Since we have already gotten our feet wet by taking out some enemies with Slug Shots, let's up the ante. In the section of the stage that is parallel the beginning segment, there is a column with a Sniper on top of it. All you need to do is run into the ramp on either side of this Sniper. Once you are high enough in the air that you are above the Sniper, use your Reflex Time and fire away.

You will only get one shot at this per run. Thankfully, if you fumble it the first time you can just race back here and try again, as the Sniper is present in the first phase. 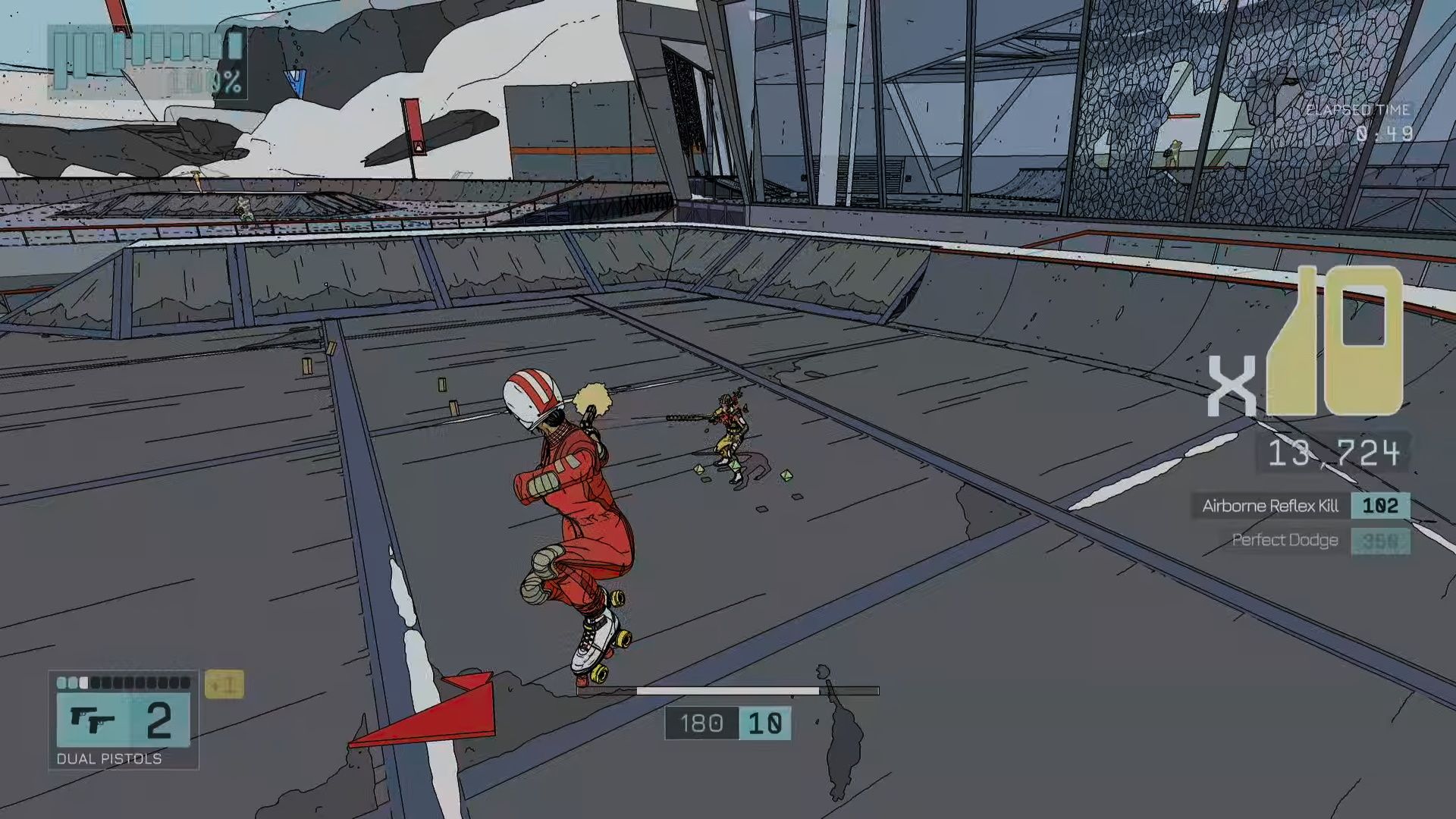 This is the first time the game is making you actually string together a successful combo. Clearing out the enemies in the starting area won't be enough, you are going to have to clear out the enemies in all three areas (you will have to loop around to the first area again if you don't grab any Combo Tokens) in order to get a 10x combo. As long as you make sure to only engage Snipers and Warheads with your ammo full, you should make short work of them.

Also, remember that you are going to want to take out the Warheads with your pistols. Trying to get them with the Shotgun will likely result in them putting up their shield. Don't leave any straggling Grunts this time out. Just clear each area, transition into the next area (which order you clear them in really doesn't matter), clear it out as well, rinse and repeat. You will get that 10x combo in no time. 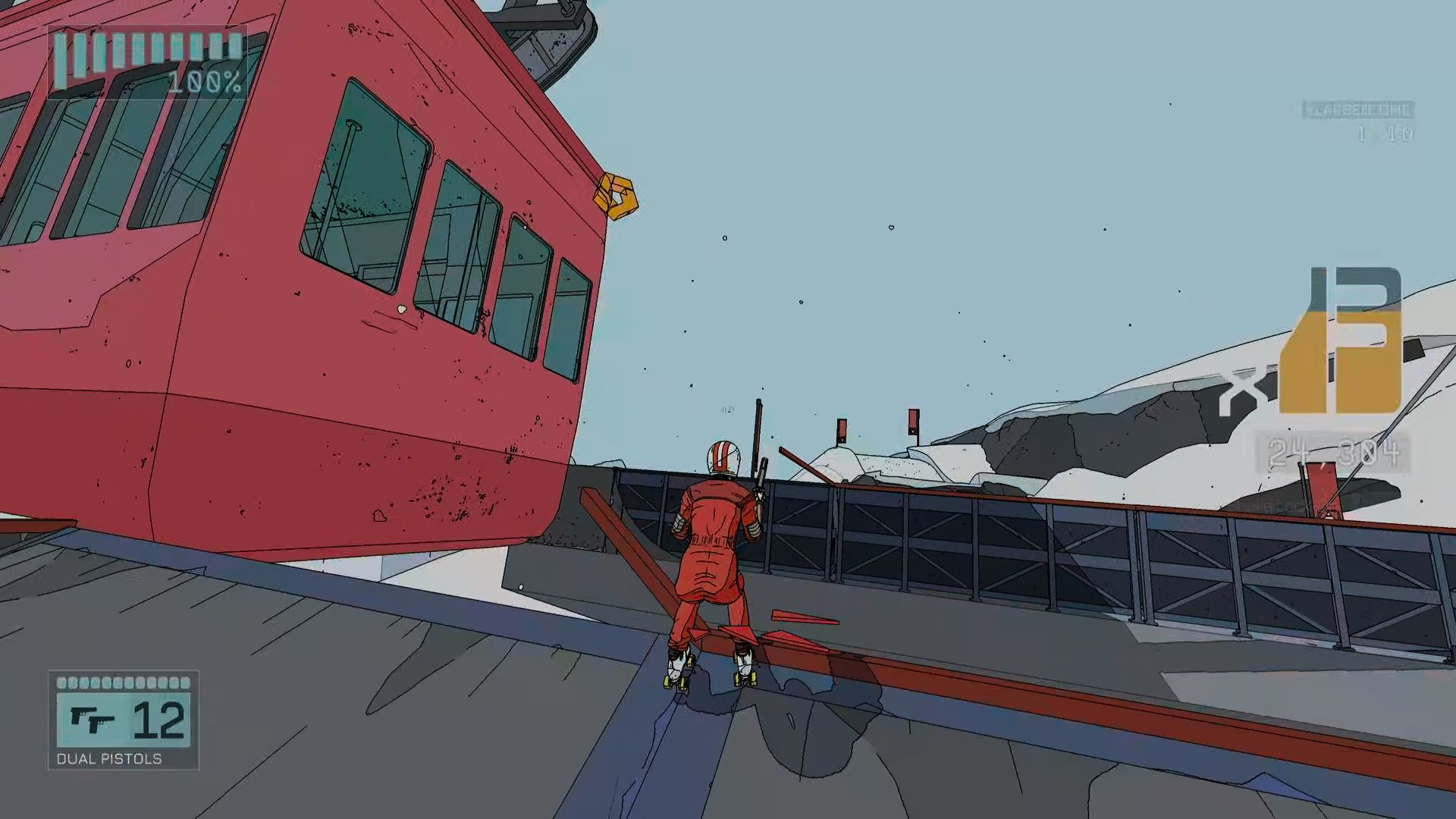 In order to Wallride you just need to press the grind button when you are up against a wall. The Ski-Lift is the red structure that bridges the two outside sections of this level together. Just grind across it, and you will complete this challenge.

Eliminate a House Player whilst doing a Nose Grind

This is a pretty simple task. You can even do it right at the beginning of the stage. Hop on the rail that surrounds the first area, perform a Nose Grind by pressing up and the grind button, pop your Reflex Time, and finally shoot the nearby Grunt.

Perform a Melancholy Flip by the Trick Token 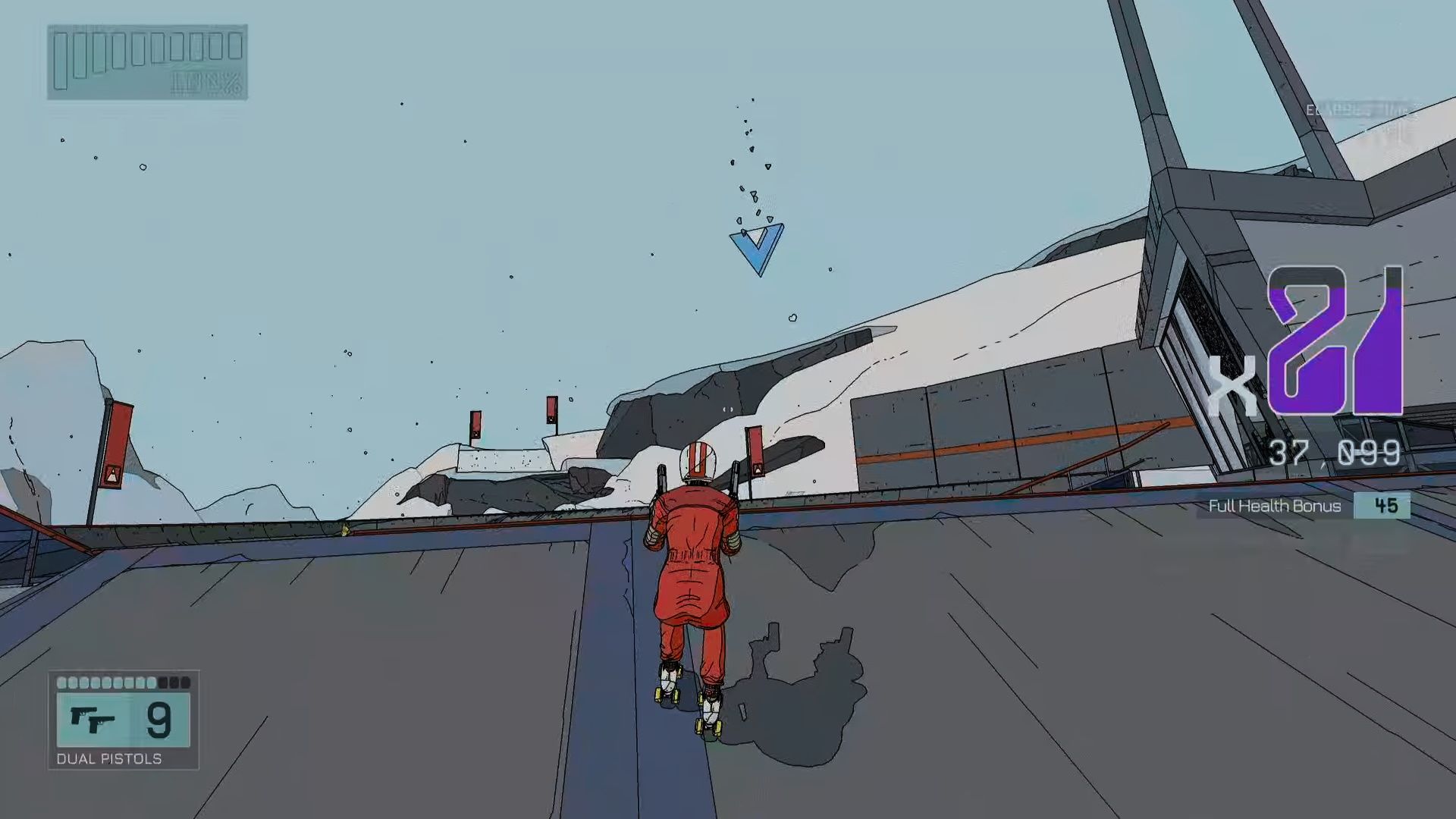 The Trick Token is hovering above the gap between the two outdoor segments of the arena. Just launch yourself off the ramp that is angled toward the Trick Token and perform the Meloncholy Grab by pressing right while you are holding the grab button.

How To Collect All 5 Combo Tokens 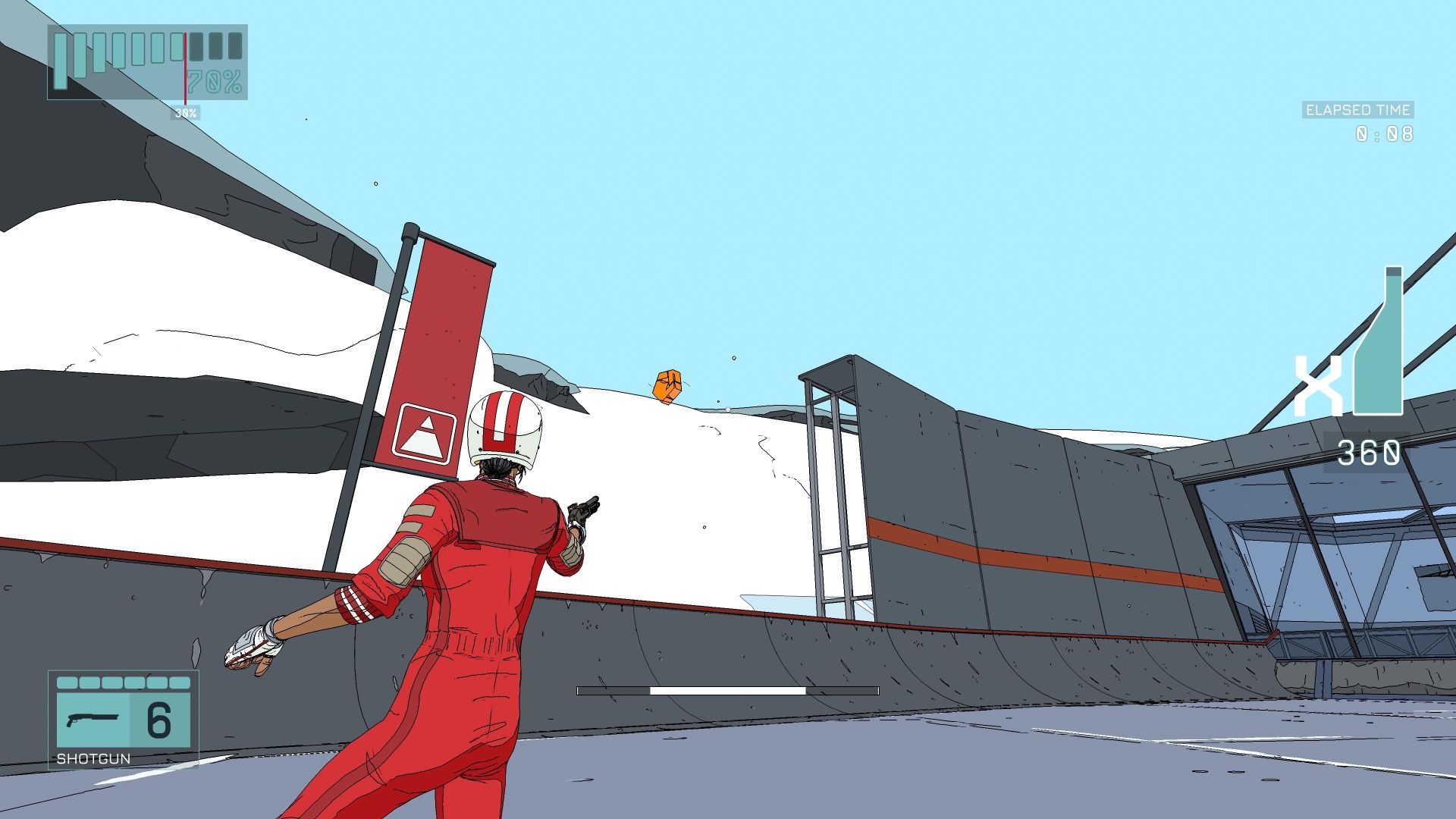 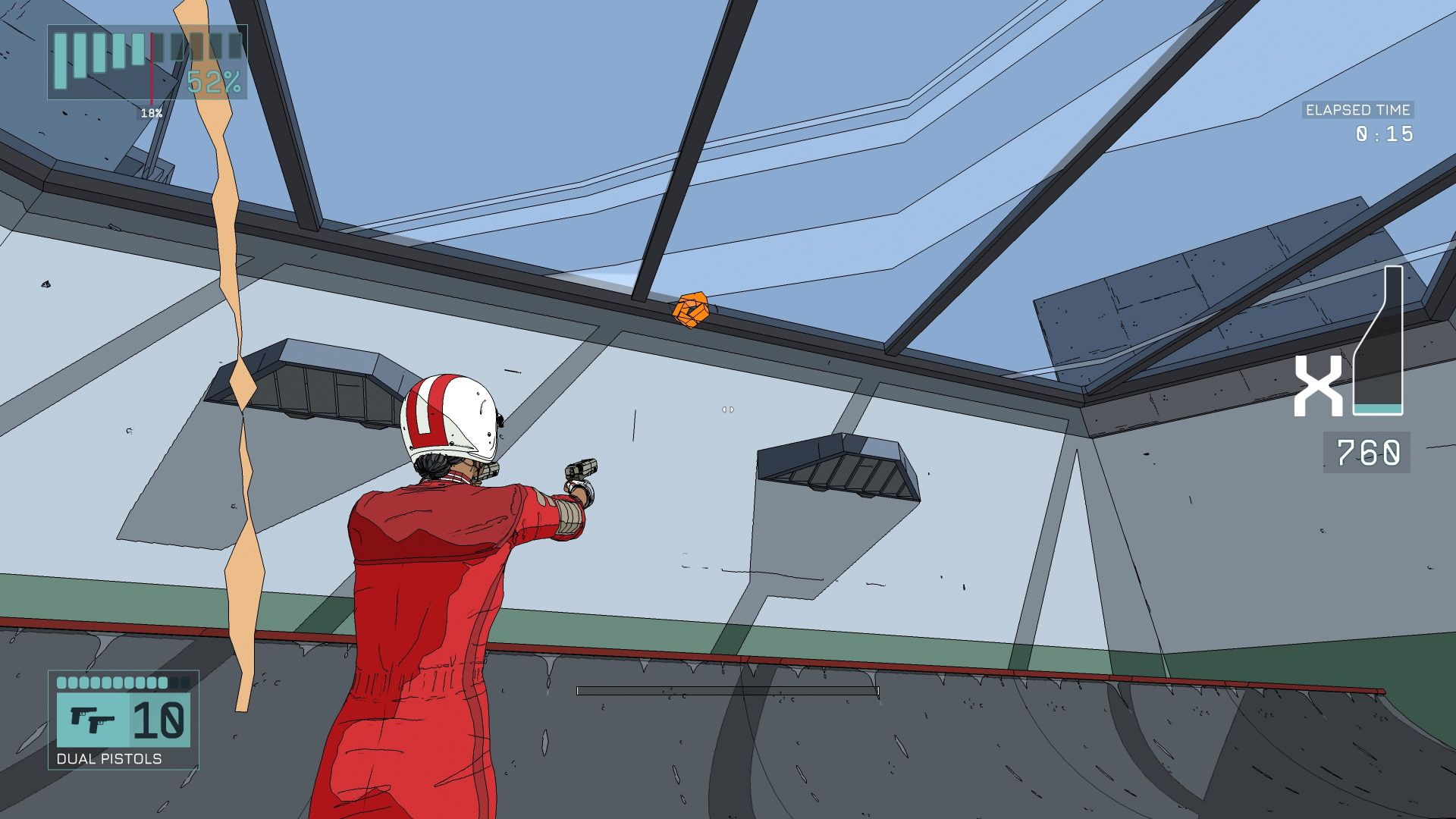 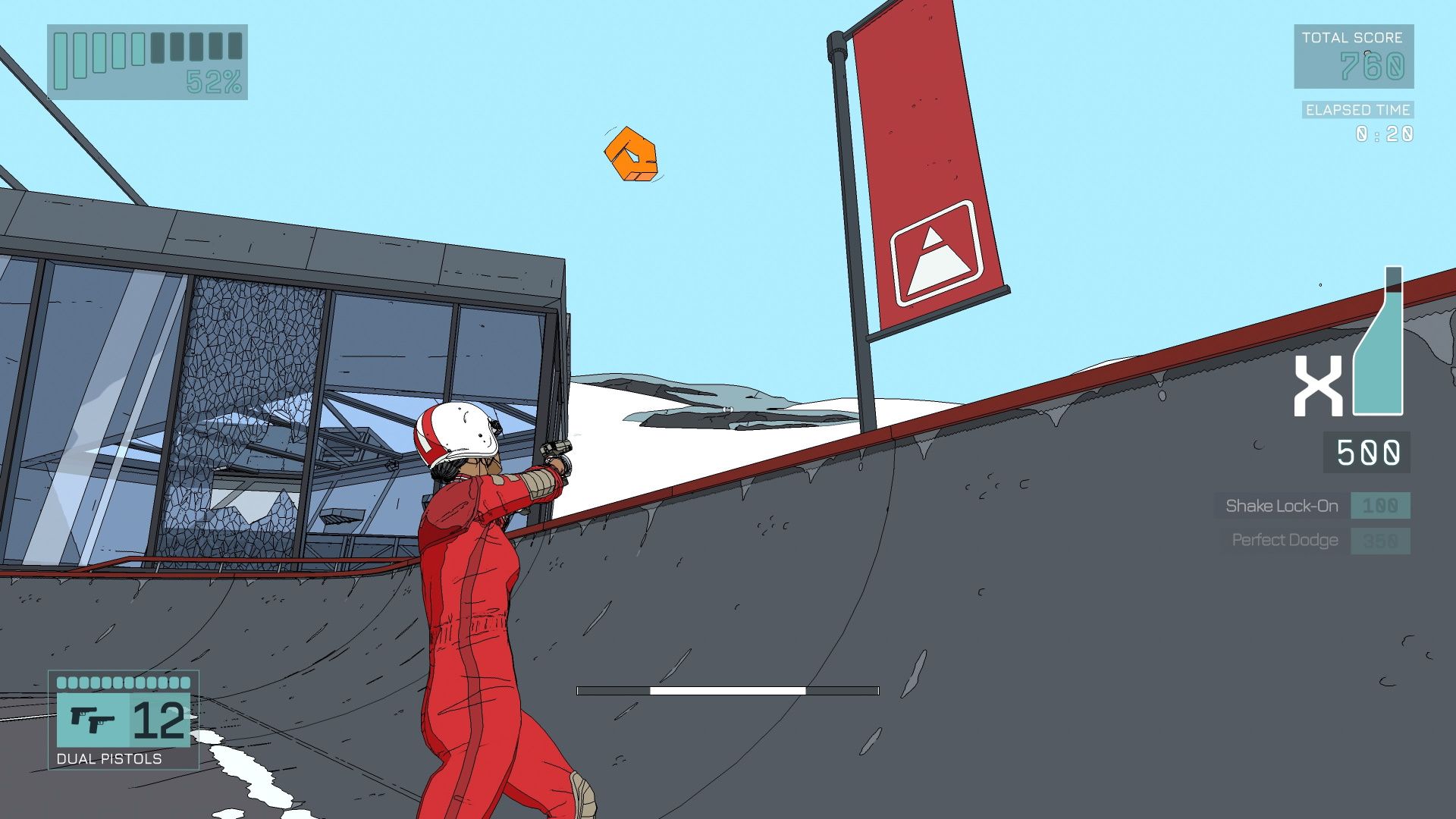 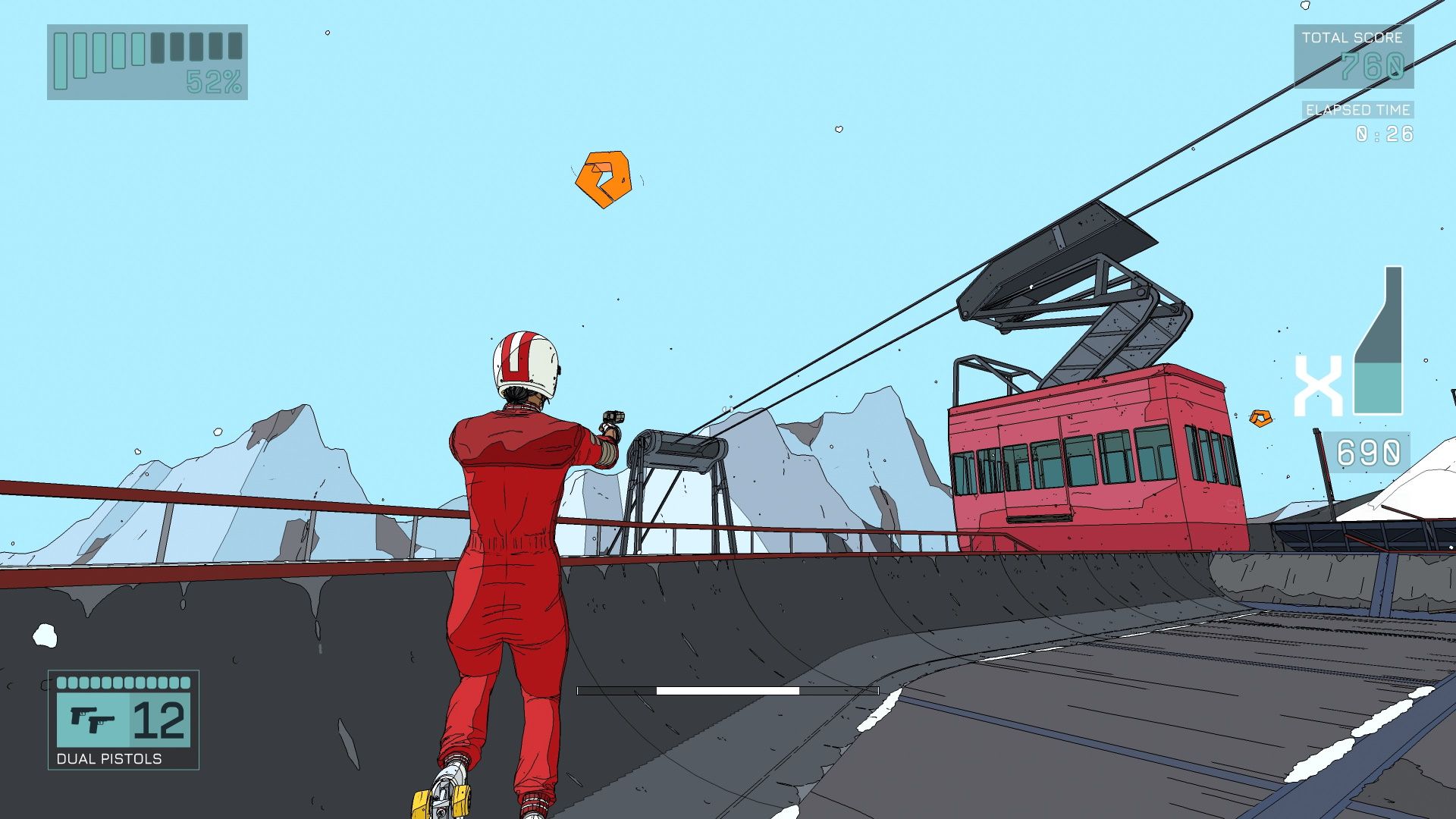 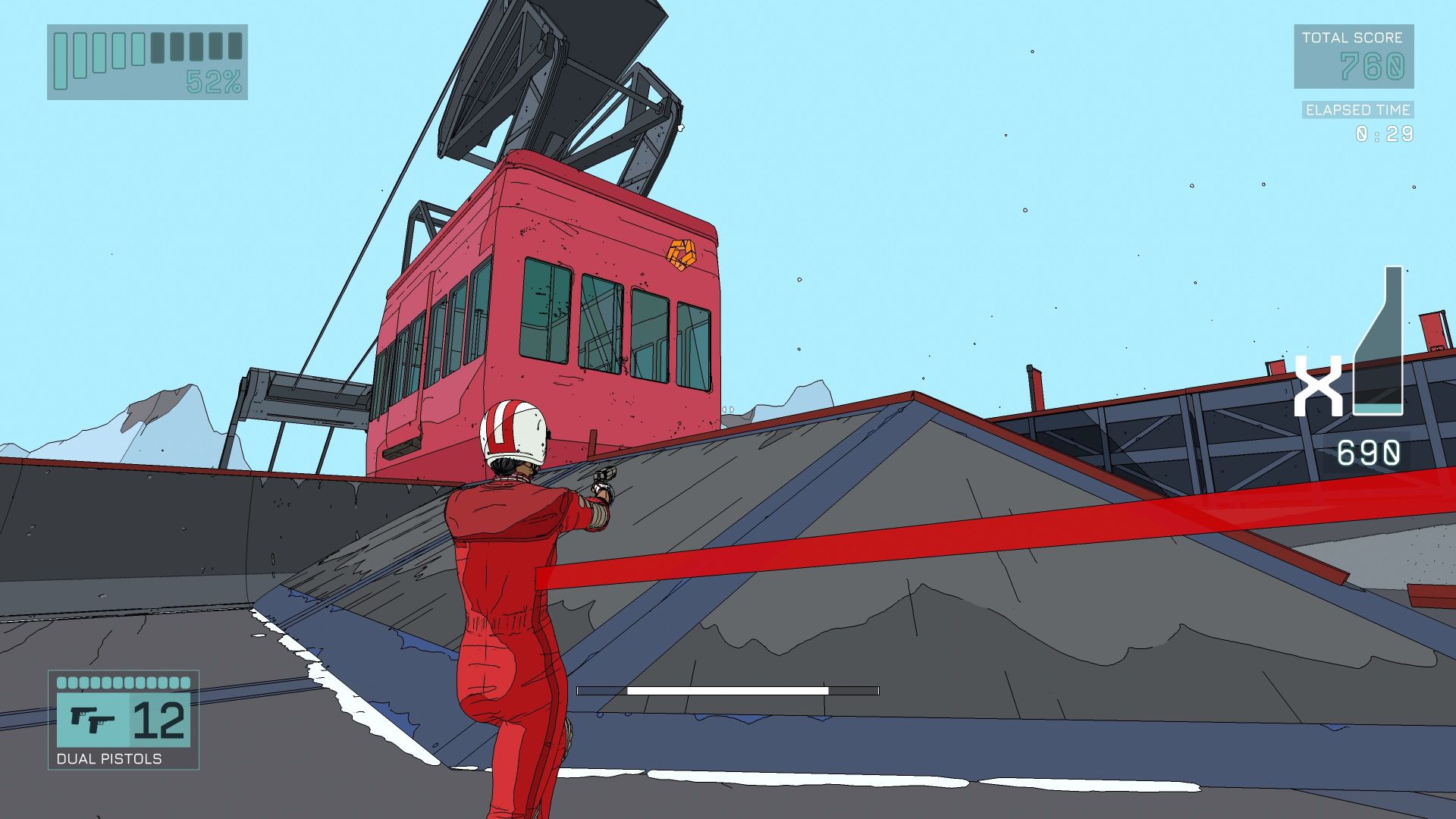 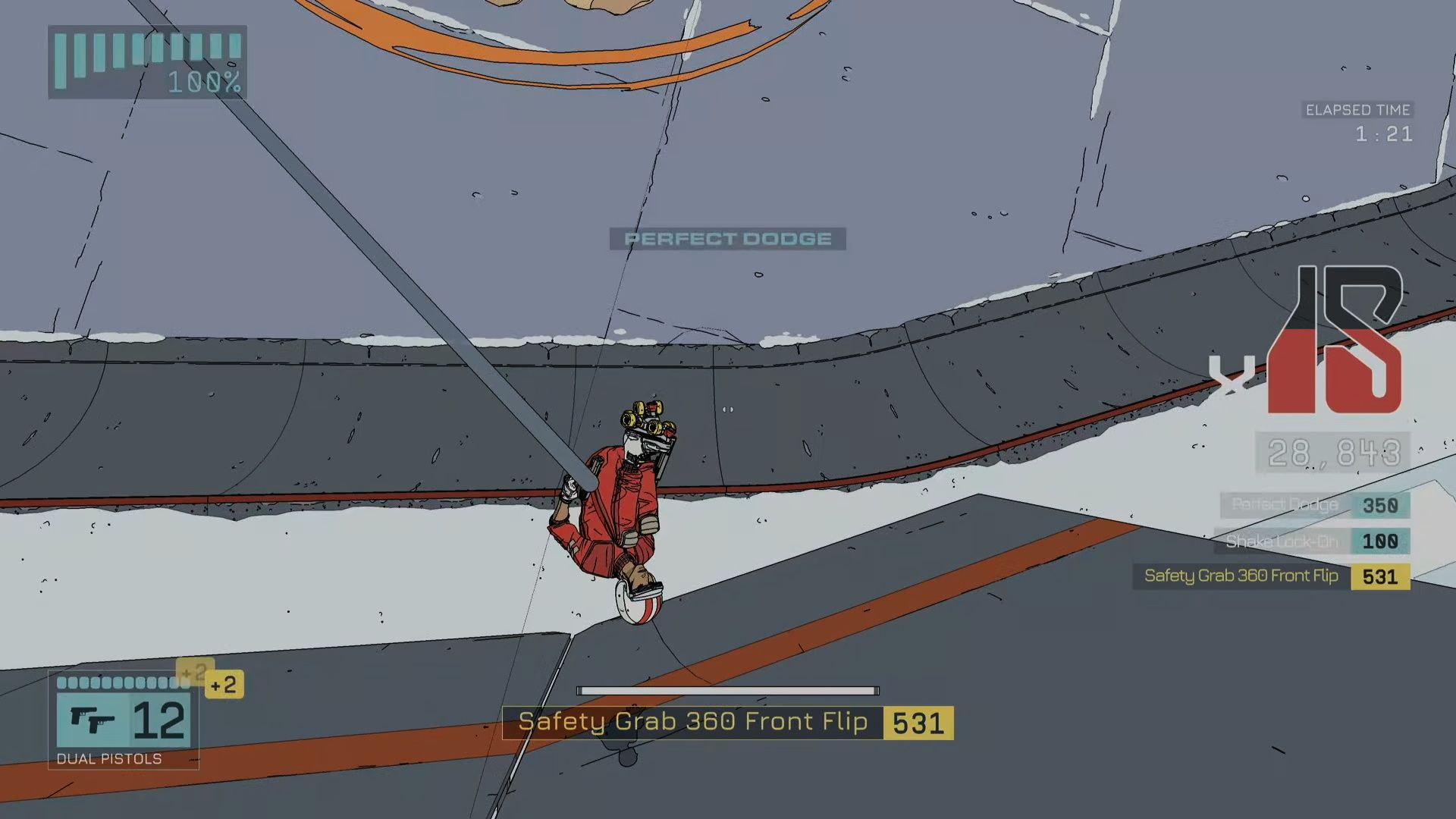 As mentioned in the stage layout section, Civetta Summit is split into three sections. Each section leads into the other two. In order to beat Morgan Fray's time, you are going to need to do two things. First, you will need to rotate between the three sections of the arena. Second, you will use the Snipers to your advantage.

For starters, you will have two weapons now. While the Shotgun is great at killing Grunts and Snipers, make sure to switch to your Pistols for the Warheads, as you can't take them out with your Shotgun without having to circle back (as they will put their shields up after the first slug hits). 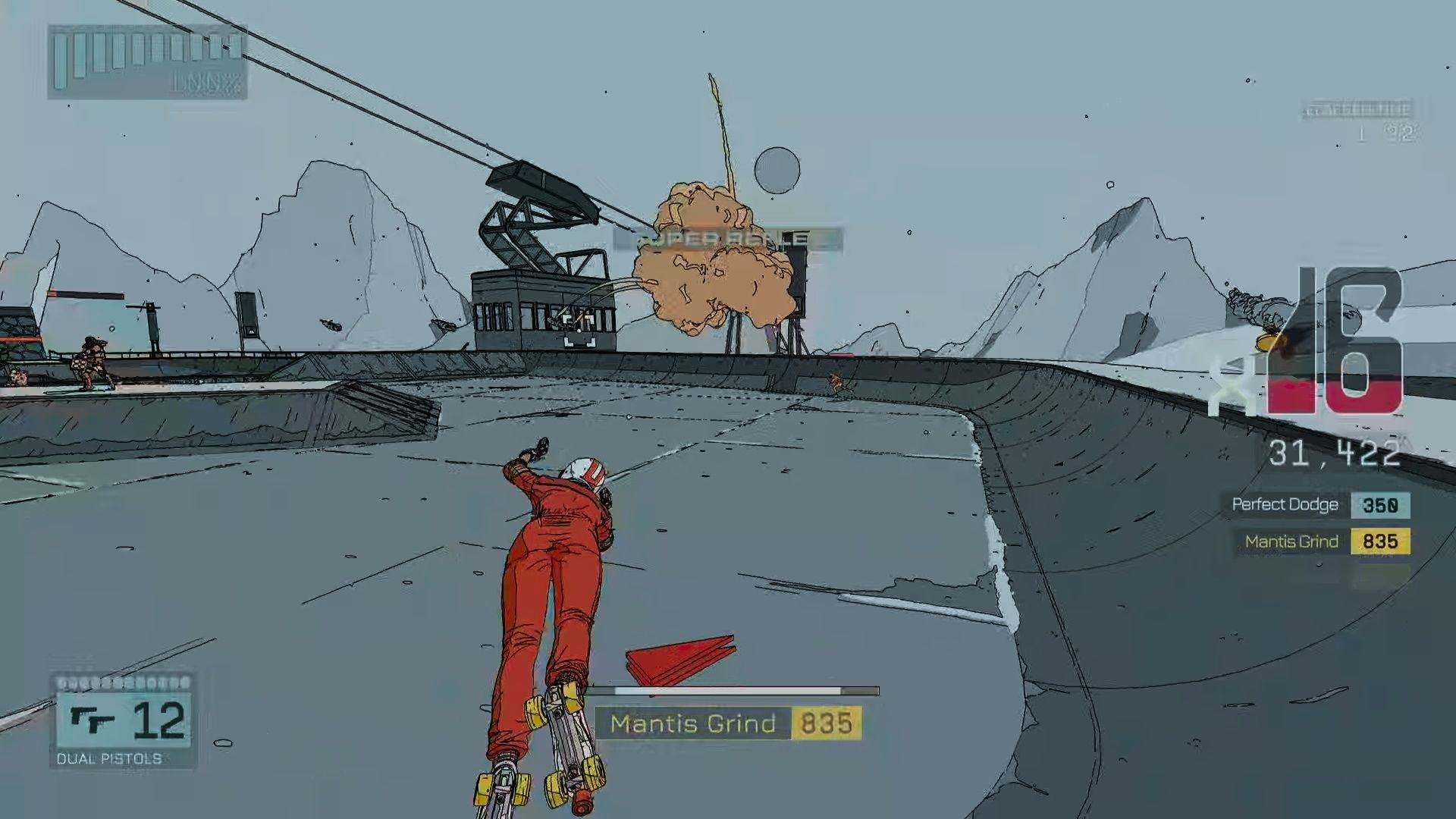 However, you aren't going to switch between the three willy-nilly. Nor are you going to chase after the Snipers every time you see a laser pop up. Instead. you are going to clear each section, and only move on to the next once you have emptied an area of all its enemies. We suggest moving through the stage clockwise, but you can do it in any order, really.

There will be a lot of Snipers appearing all over this arena throughout your time at Civetta Summit. While this may seem like an issue at first, you will be able to use them to your advantage. You are going to use these Snipers as fuel for your Super Reflex Time. In fact, since there is a steady supply of Snipers, you will be able to have a nearly constant supply of Super Reflex Time, which will let your wipe out every single enemy Civetta Summit has to throw at you in short order. 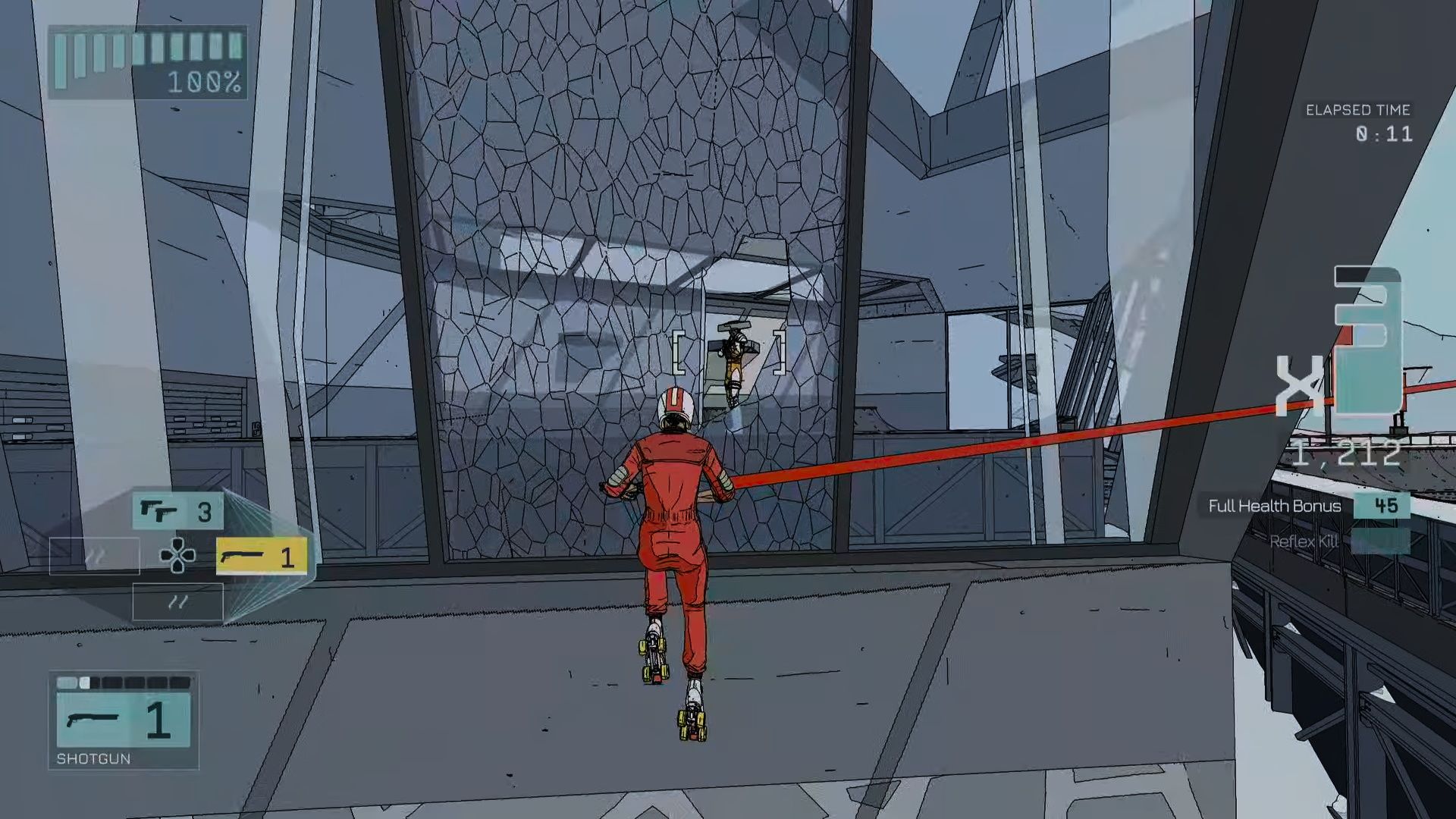 You will start by popping into the arena and clearing out the grunts in the first section. Grab the Combo Token to your left while you are at it. Now, hop through the glass and take out the Sniper (feel free to use the explosive barrel). Now, fly up the ramp, grabbing the Combo Token ideally, and replenish your ammo with a trick. Enter into the third area, ride up the ramp next to the tower, and take out the Sniper (if you haven't completed the challenge yet, make sure to take him out with your Shotgun's Slug Shot).

A few more enemies will spawn in this area, including a Warhead. Replenish your ammo with tricks (ideally, grabbing the Combo Tokens that are hovering on both sides of the tower) and take the Warhead out. There will be Snipers taking aim at you from the other areas at this point, so you should be able to get Super Reflex Time pretty easily, which means that your pistols will make short work of the Warhead. 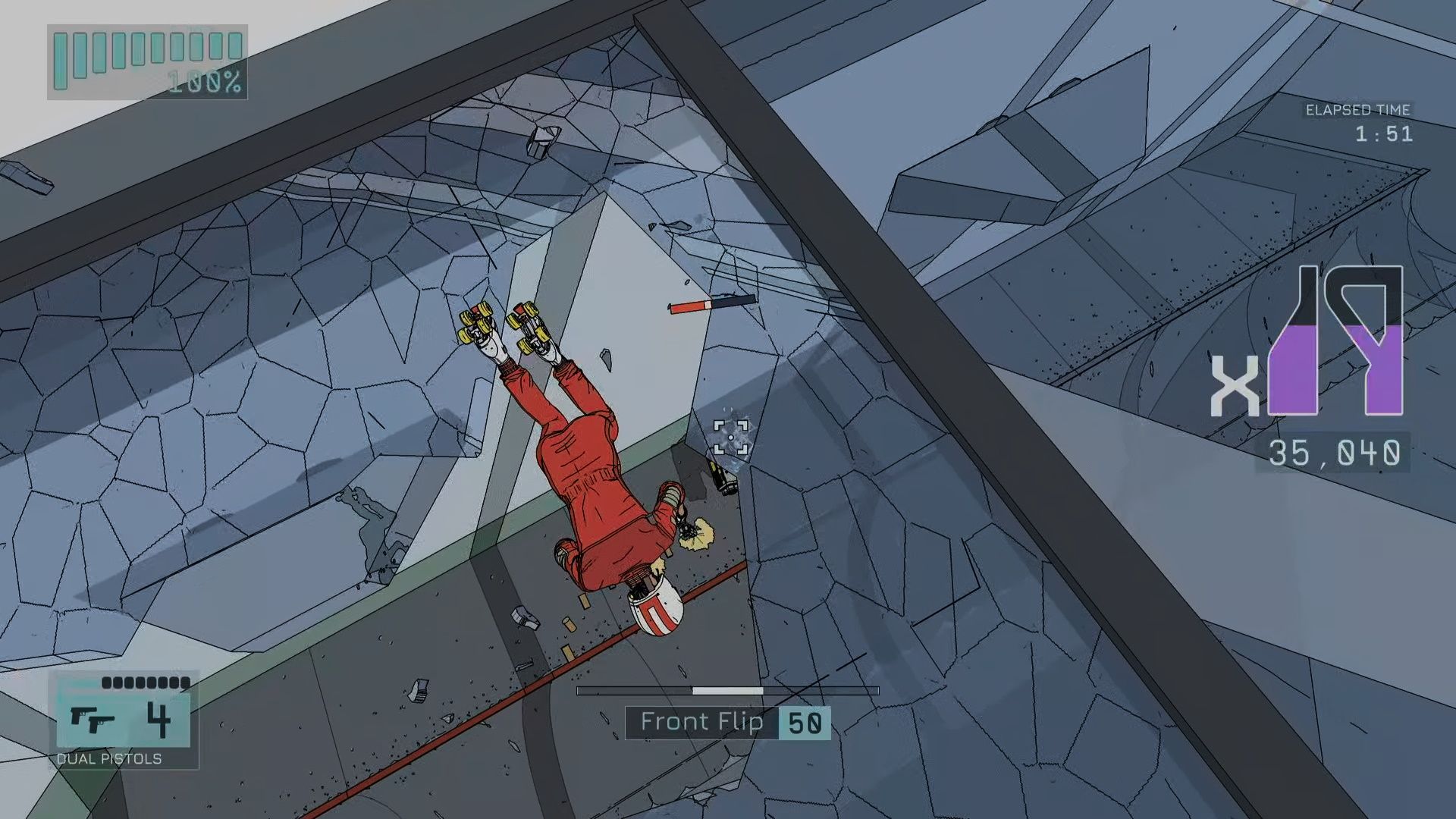 Now, you just head back to the first area again (wallriding across the Ski-Lift will lead you directly into another Combo Token), which will now have Warheads and Snipers. Just clear them out and complete another rotation through the three segments. You will have to complete three rotations in total. There really aren't any major surprises, just more Snipers, Warheads, and Grunts.