Rollerdrome's Pike's Canyon is, unquestionably, a step-up in difficulty. With the inclusion of the new rocket-firing, Warhead enemies, and with the implementation of crows’ nests to help make Sniper's more difficult to reach, this is a stage that asks for a greater level of mastery when it comes to controlling Kara. Also, unlike the Matterdome Arena, there isn't a convenient rail that will help you grind around the entirety of the stage.

But worry not, though Pike's Canyon does introduce some trickier new elements, it isn't anything that you can't handle. Especially since we are here to help guide you through every trick this stage has to offer. We will also make sure to point you in the direction of all those Combo Tokens. 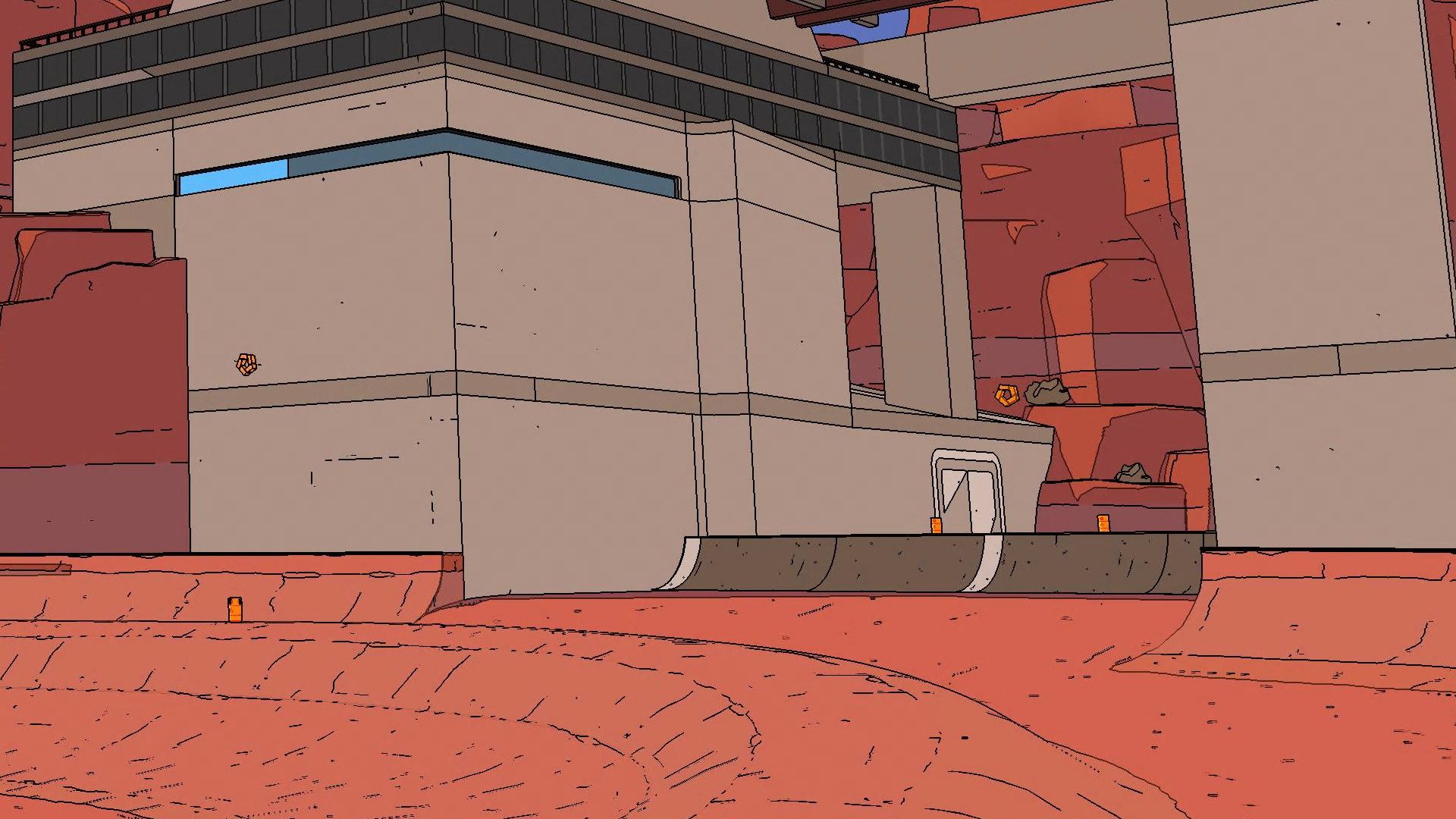 Pike's Canyon has a quarter pipe ramp on one end (this is where you enter the stage) and a half bowl on the other. The rest of the stage is filled with dirt ramps that you can launch yourself off of. If you are facing the half-bowl, there is a perch to your right and to your left. As the stage progresses, there will be snipers that appear on these platforms. The space between the half-bowl and the quarter pipe is pretty large. Most of the enemies you fight will be huddled around the bowl, but a couple of snipers will spawn on that quarter-pipe. In order to make your way back there without losing your current combo, you will want to take Grunts out along the way. So, make sure to not clear them all out. 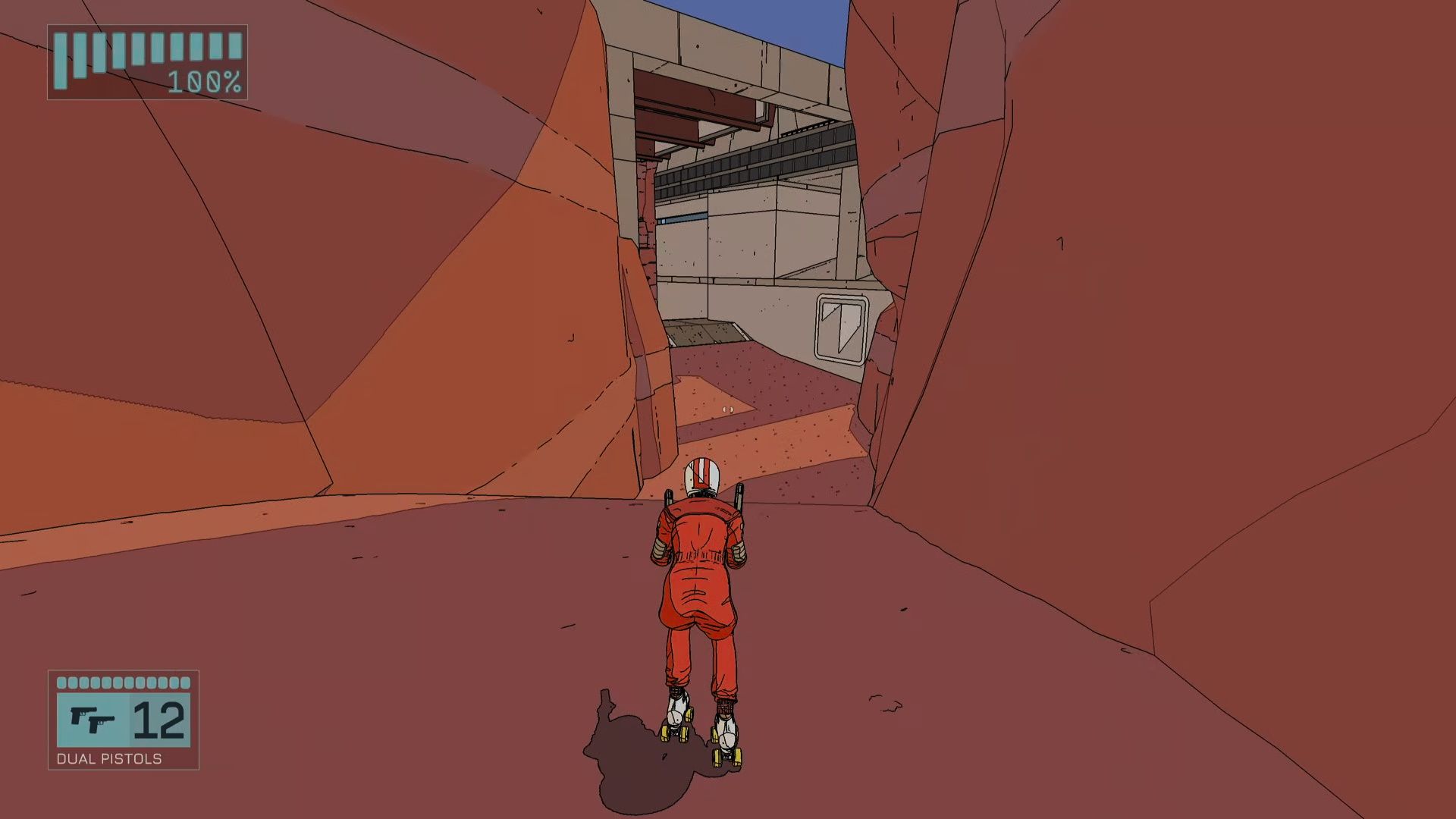 Pike's Canyon is definitely a step up in challenge from the Matterhorn Arena. However, while this stage may ask a little more of you, a few of these challenges are still essentially gimmes. That being said, we will still help make guide you through these challenges and assist you with any potential roadblocks.

Just press down on the grind button to perform this trick. It is as easy as that. 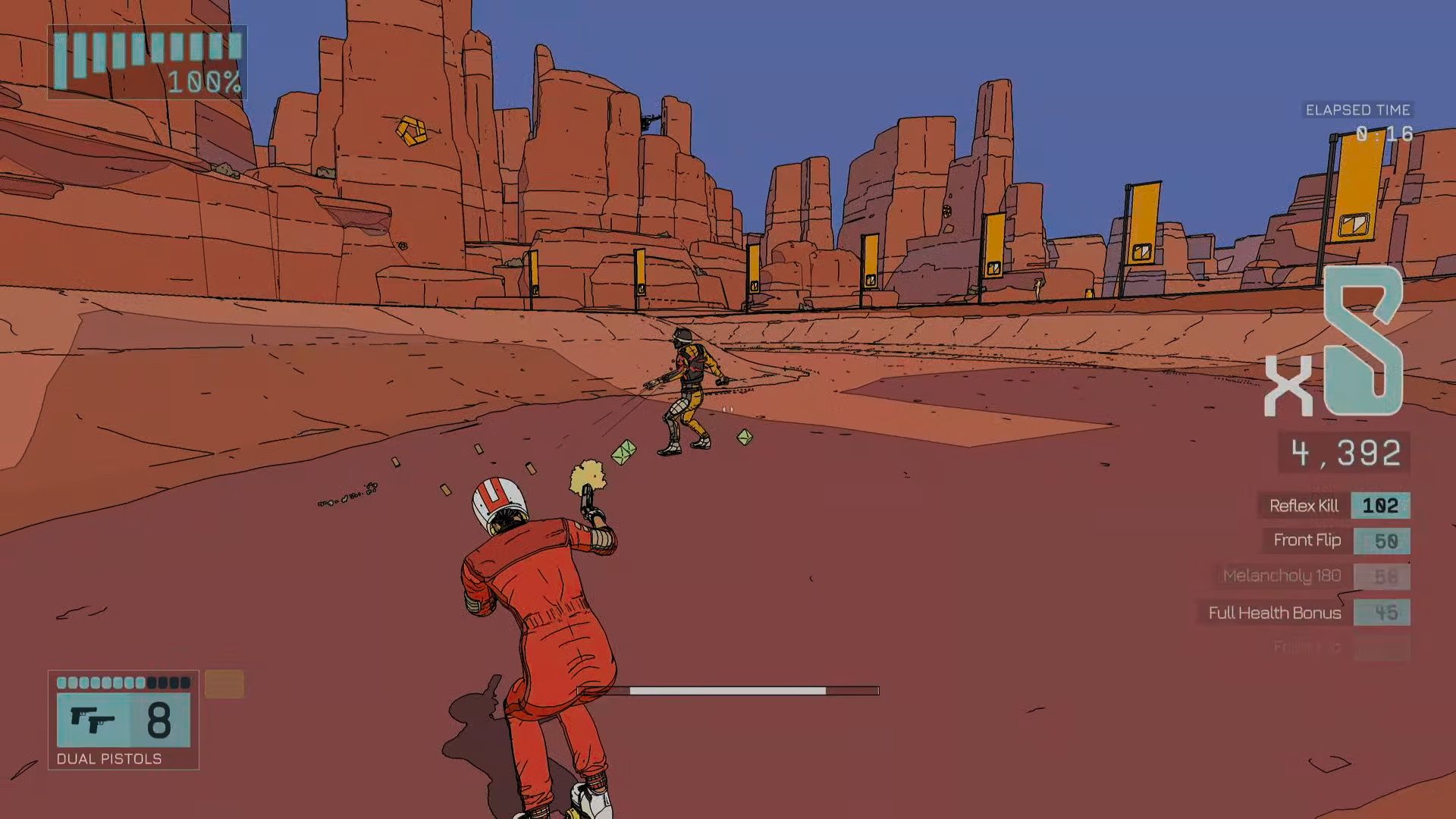 While this combo is slightly more demanding than the previous stage's combo requirement, it is still incredibly easy. There are actually enough Grunts lingering around during the first phase of this stage to earn a combo that is 5x long. Not to mention that the first Combo Token is right at the beginning of the stage as you enter into the arena.

Every enemy drops four health pickups and there are 23 enemies in this stage. The health pickups do not disappear. It is hard to imagine a scenario where you don't complete this challenge naturally as you finish the stage.

Shoot 5 Rockets out of the air 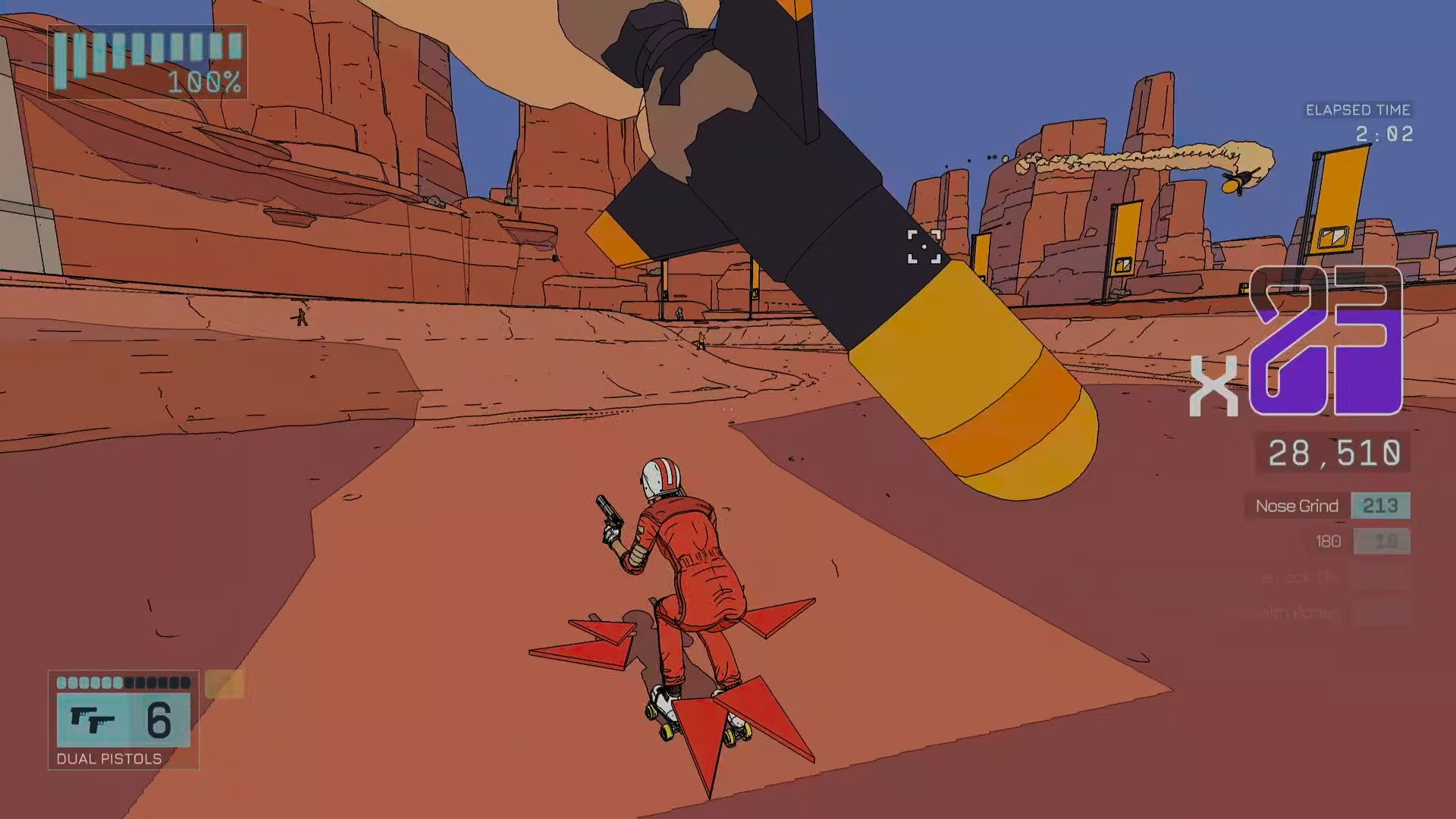 Once the Warhead enemy type starts appearing, there will be tons of Rockets littering the stage at all times. Just pop your Reflex Time ability and shoot them out of the air.

Dodge 2 SNIPER shots at the last moment before they fire 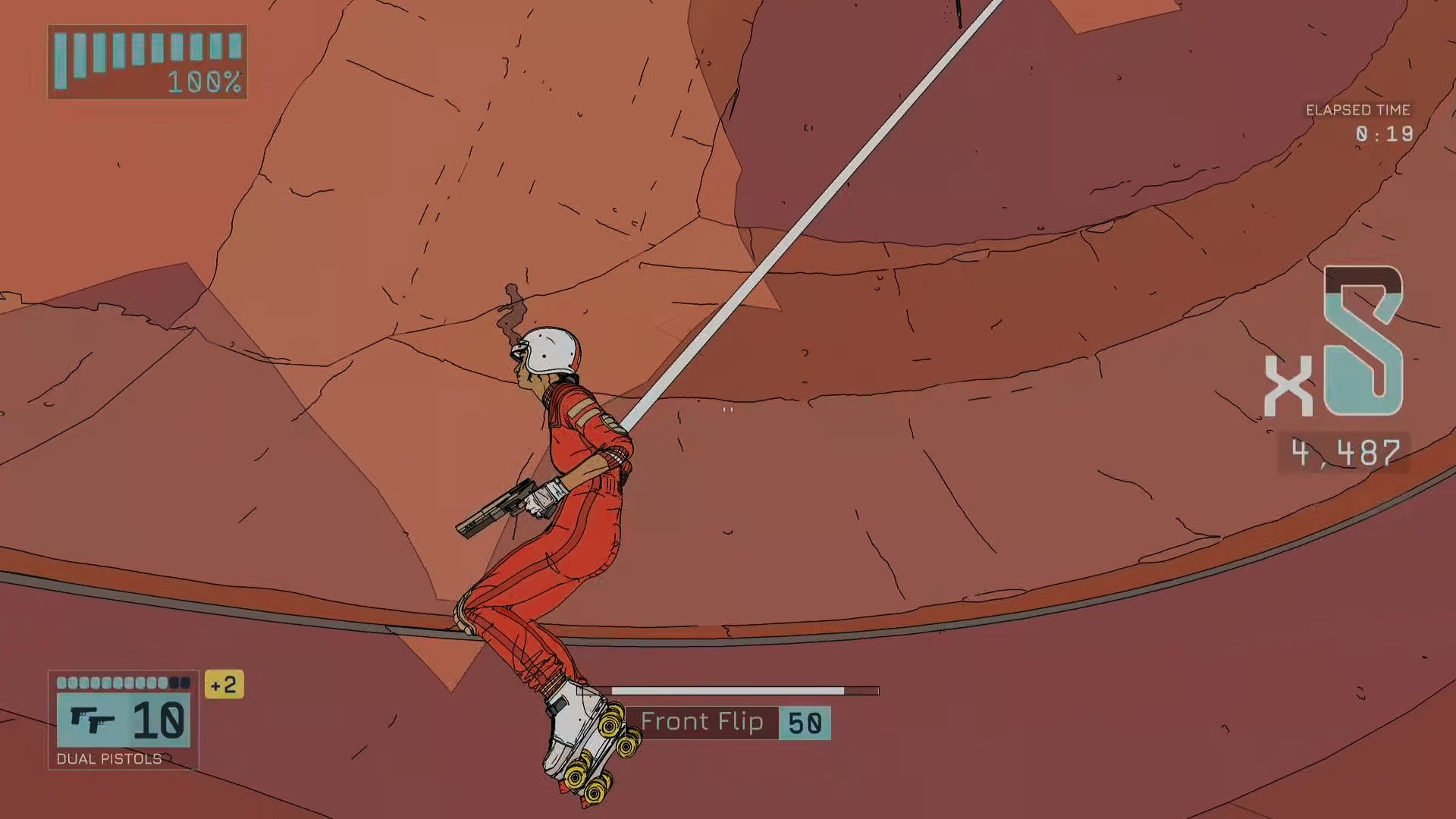 This task isn't so hard. When you are being targeted by a Sniper, just wait until the Sniper's laser turns from red to white. The second it becomes white, dodge.

Fun fact: if you go directly into your reflex time after dodging the Sniper's shot at the last second, you will enter into an enhanced version of Reflex Time. You will gain some ammo AND your shots will do considerably more damage. This is a good time to start practicing the technique, as it will be extremely important for the later stages.

Use Dual Pistols to take out a WARHEAD before he can activate his Shield. 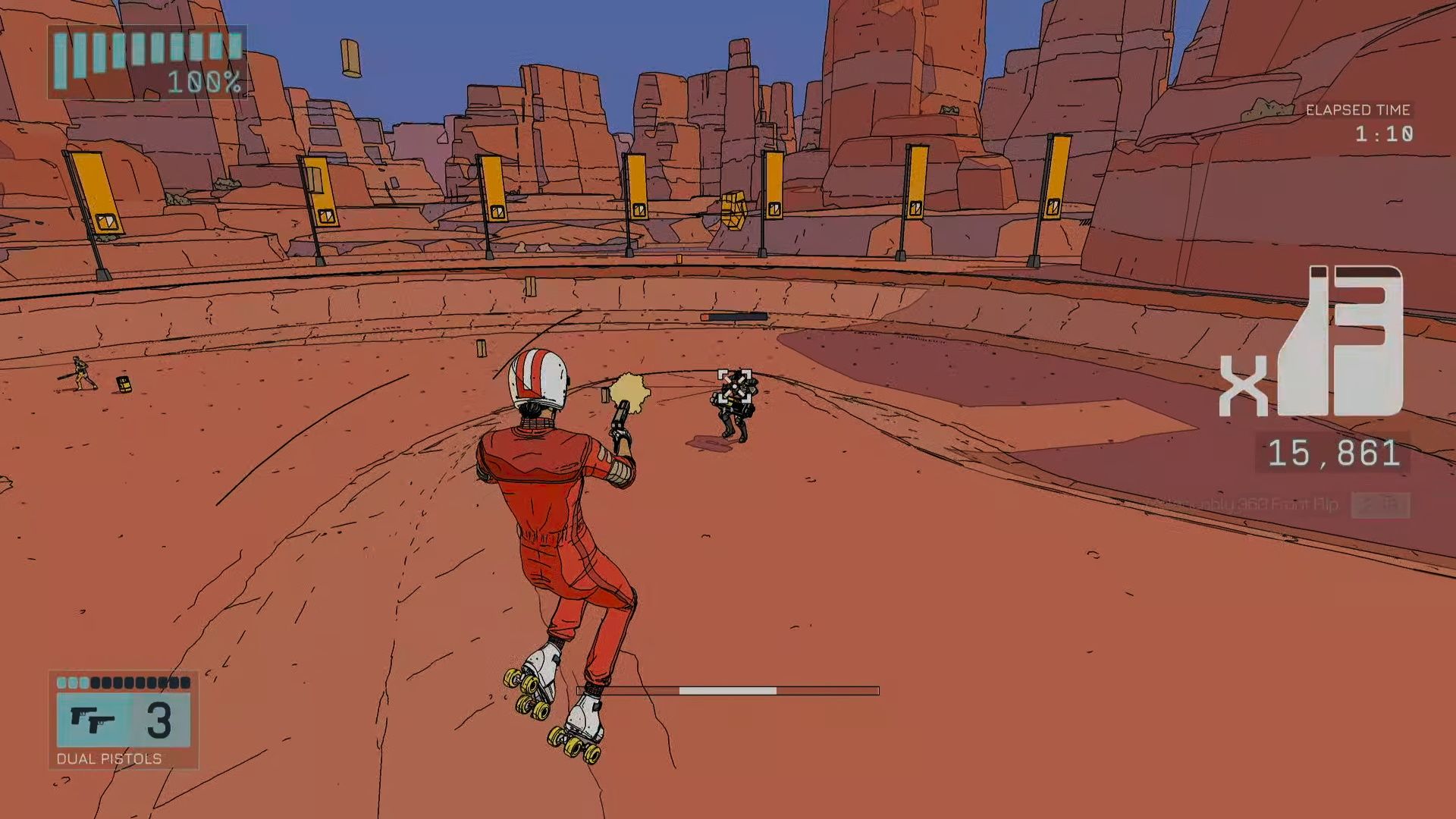 The Warhead enemy is introduced in Pike's Canyon. After being hit, they will put up a shield that will momentarily protect them from all damage. However, there are just enough shots in your pistol to take out a Warhead, and as long as you don't stop firing, and empty your clip into him, you will be able to kill him before he is able to utilize that shield.

Perform a Nose Grab by the Trick Token

If you grind the right side of the rail, it will lead you directly to the Trick Token. Just hop up and press up and the grab button to perform the Nose Grab.

How To Collect All 5 Combo Tokens 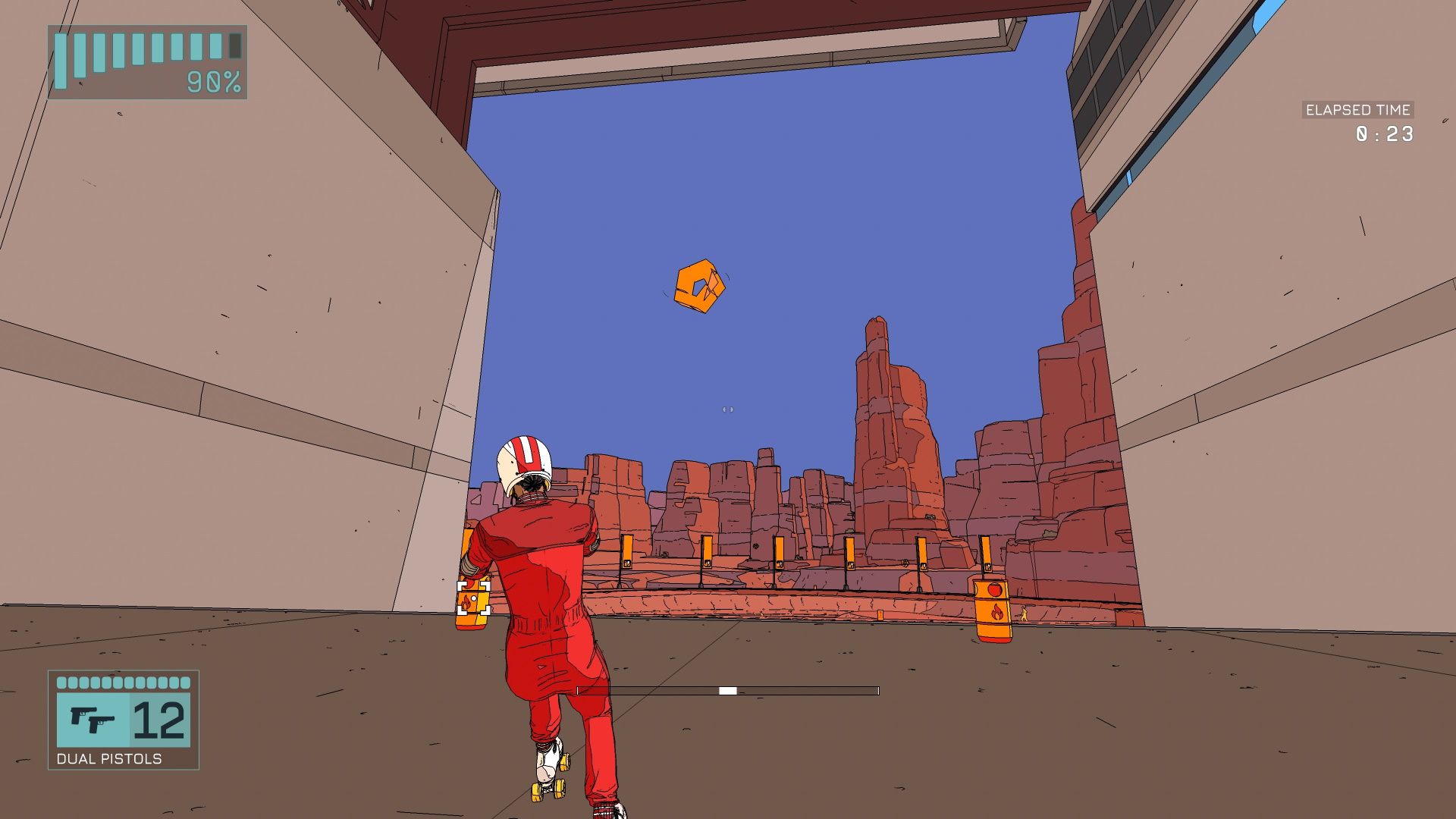 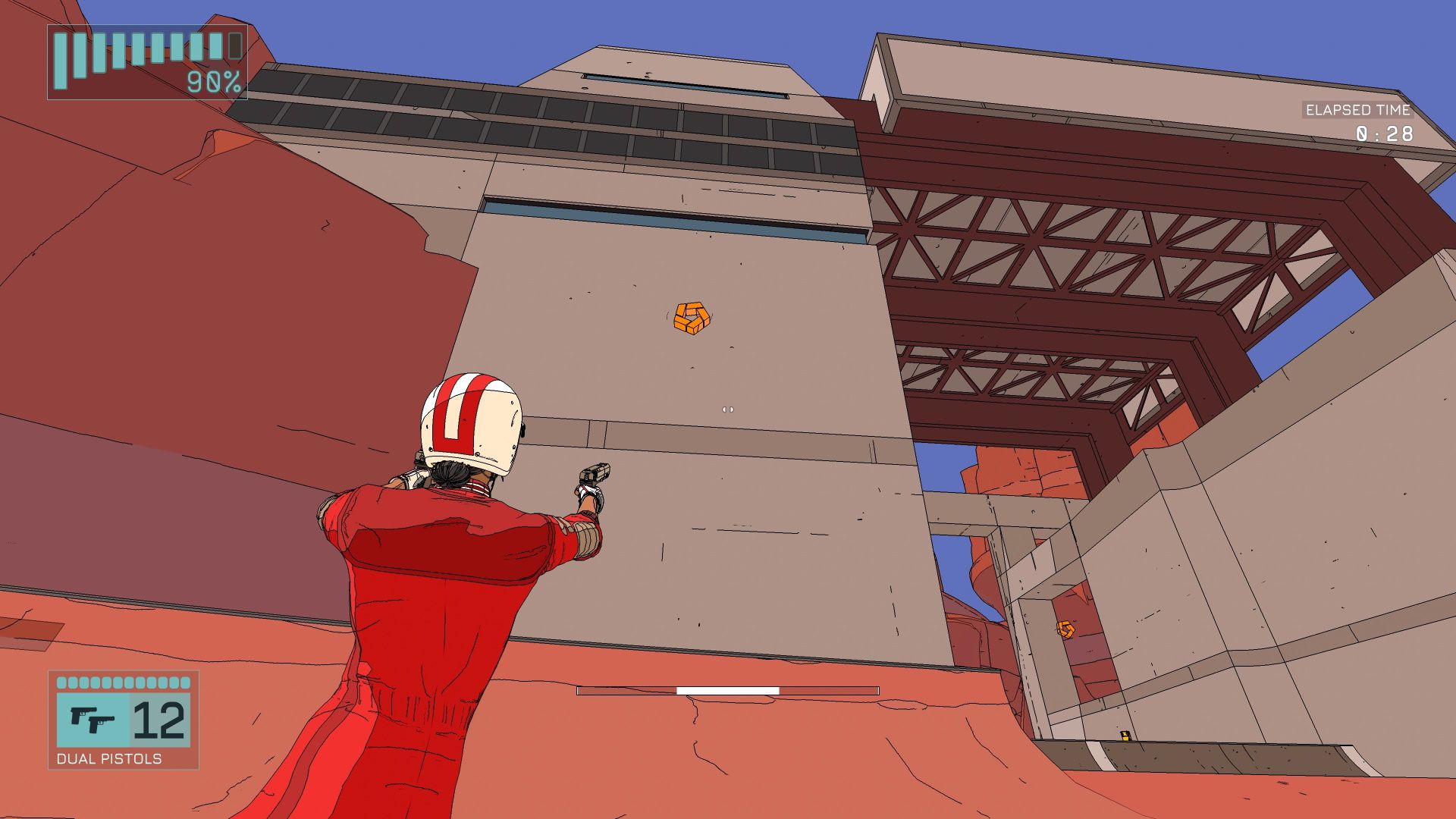 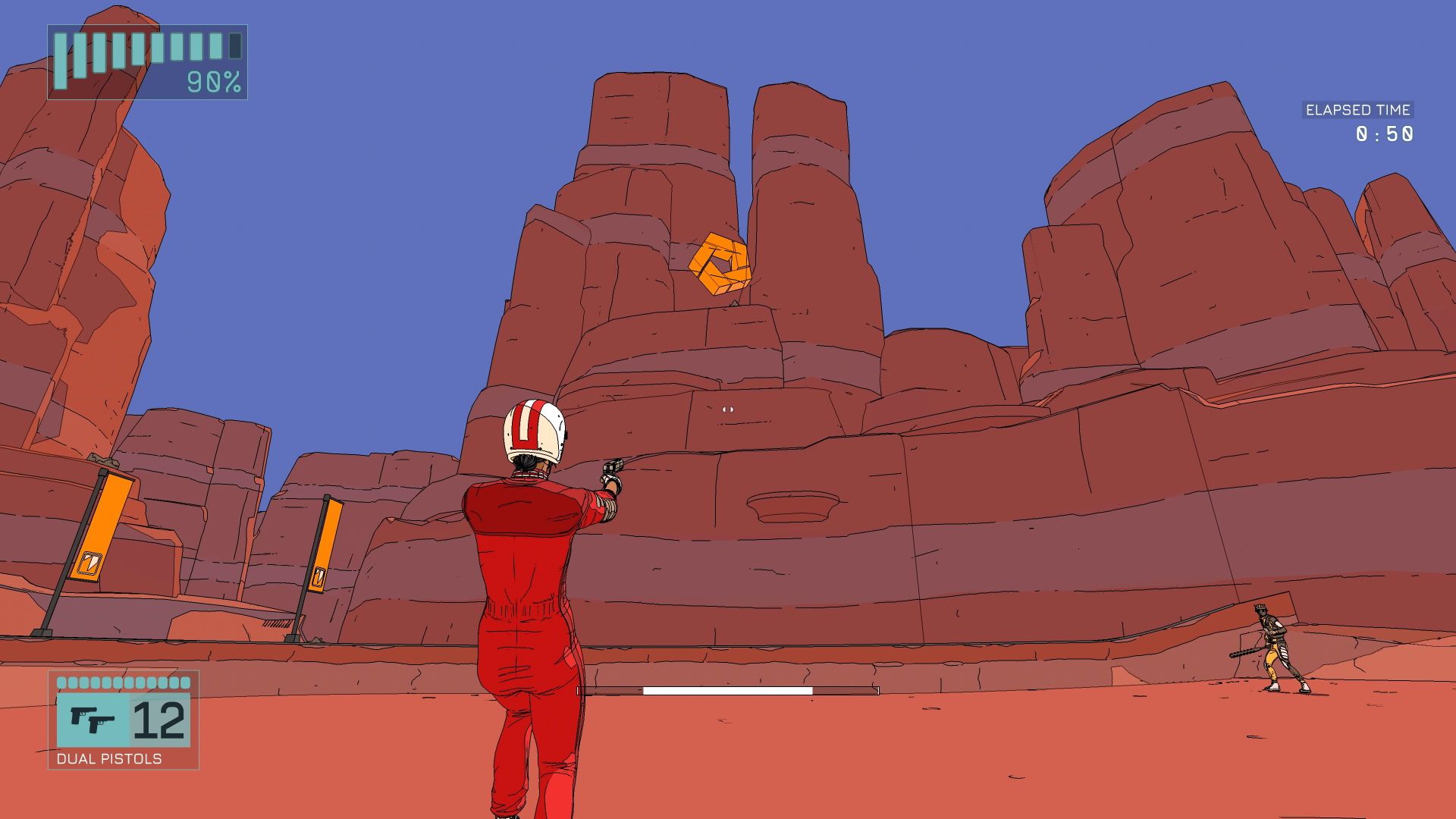 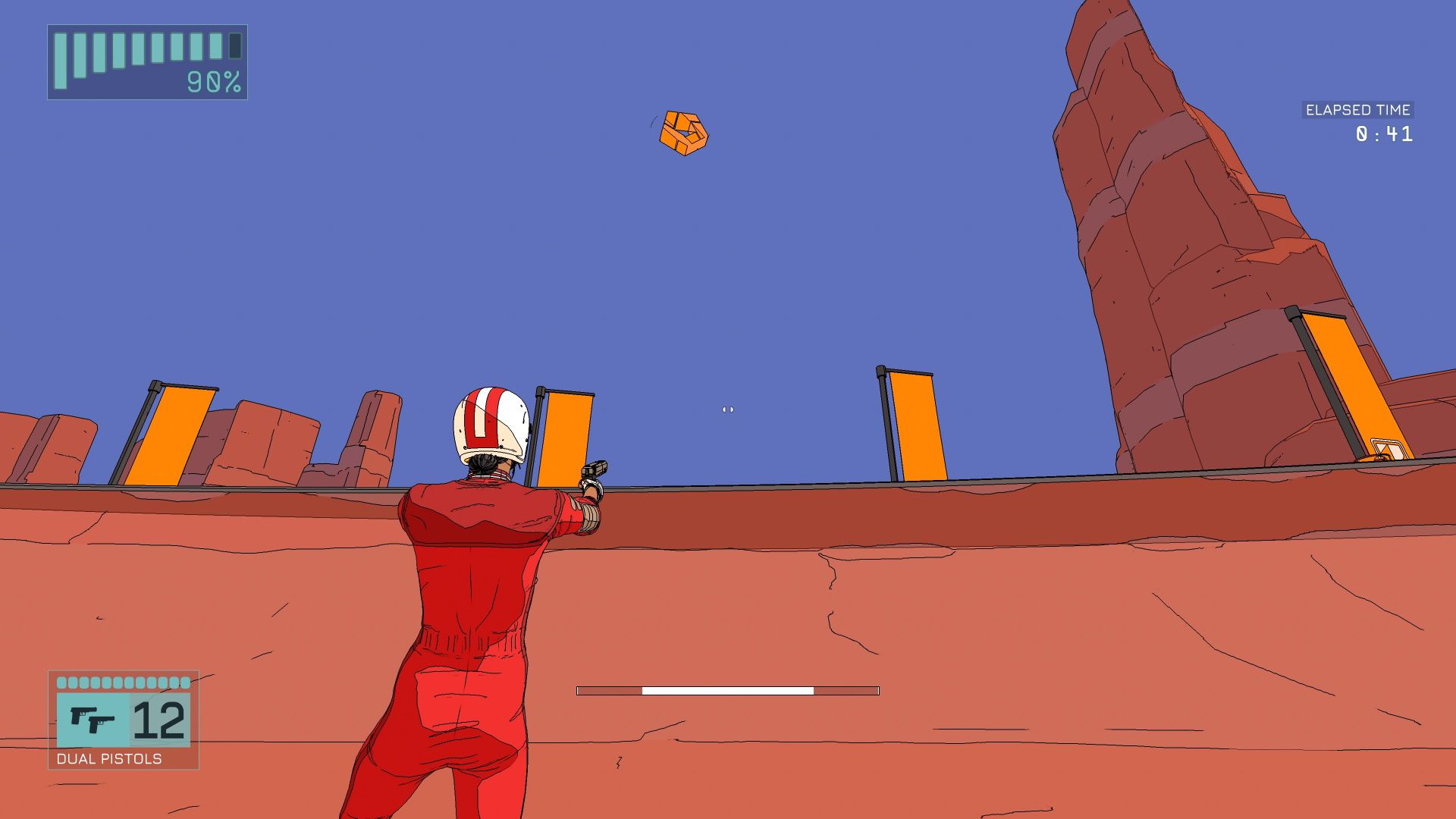 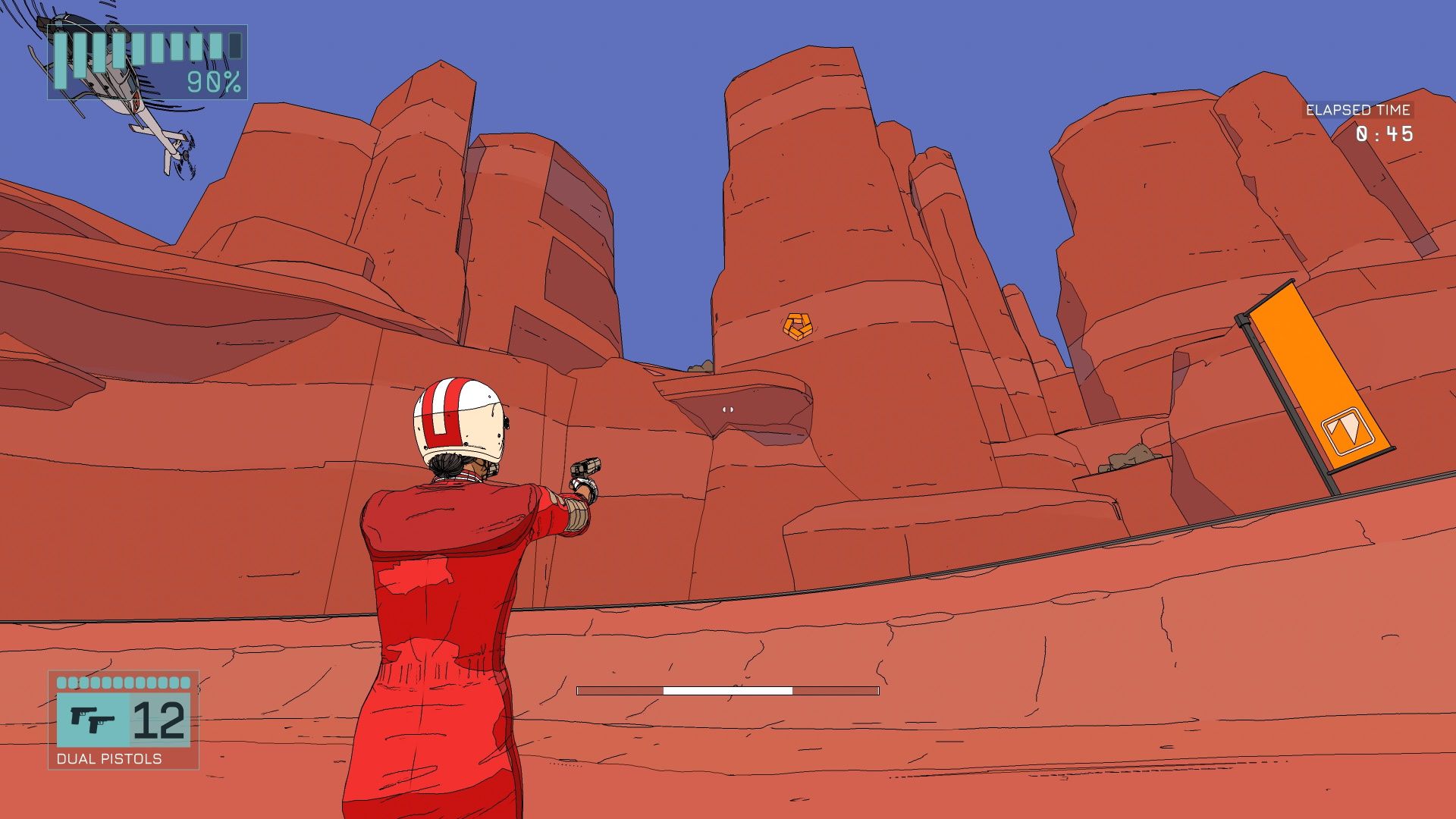 The first Combo Token is floating just above the quarter-pipe, where you start the stage. So, you can grab it right when you enter into the arena. The next Combo Token is just to the right of that one; it is hovering above another ramp. The third is hovering over one of the ramps close to the half-bowl. The last two are hovering above the half-bowl. One is pretty much in between the two Sniper ledges, and the other is pretty close to the Sniper ledge on the left (if you are facing the bowl). All of these are obtained in the exact same way you claimed the Combo Tokens in the previous stage. There is no trick to them. 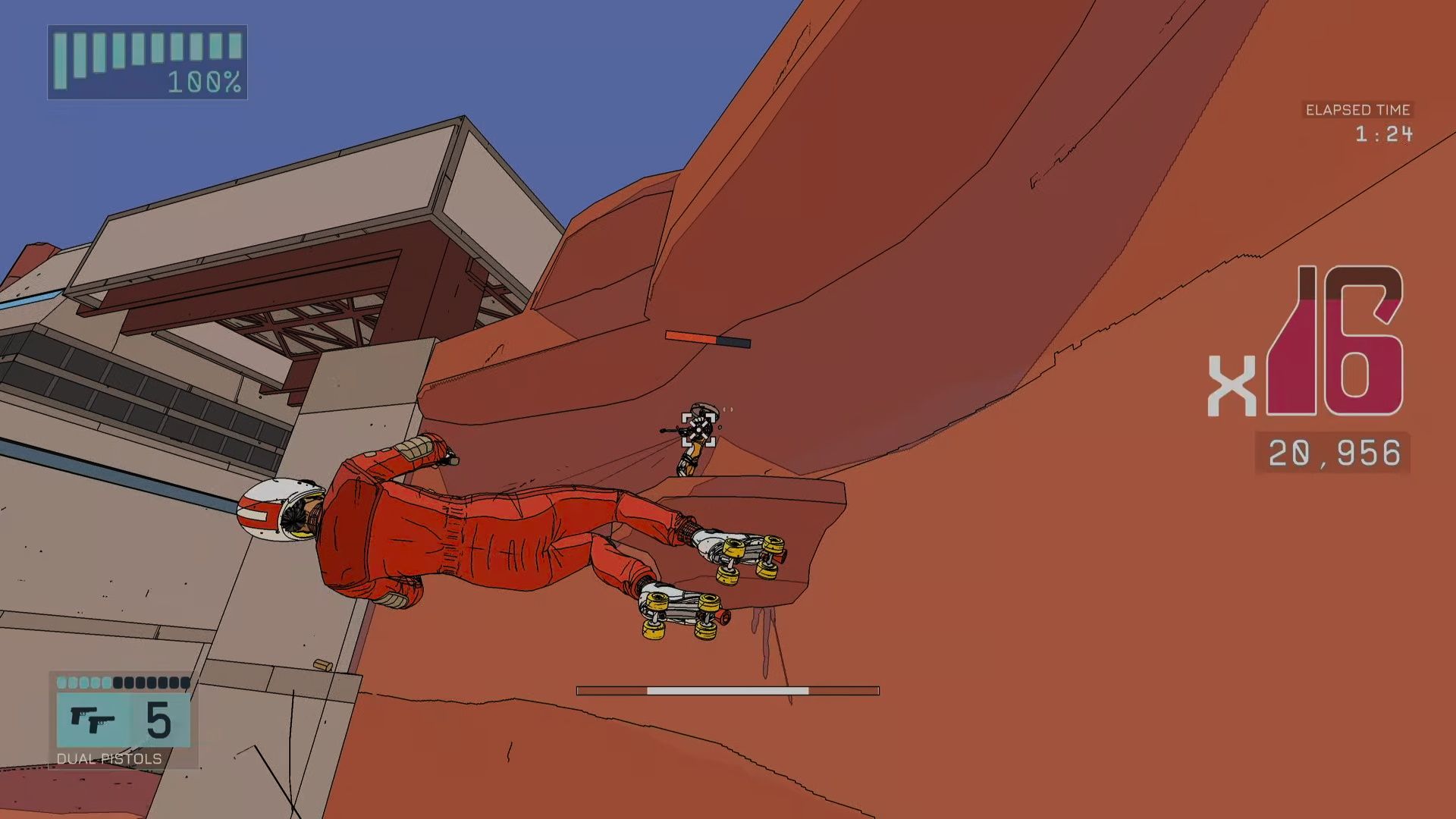 When chasing after Morgan Fray's top time, there are two things that are likely to give you issues (initially, at least). One, the Snipers positioned at the top of those platforms on either end of the stage can be a real hassle. You will have to deal with three of them in total. Another issue is that during two separate phases, enemies appear on the quarter-pipe at the other end of the stage.

For the Snipers perched high above, just make sure you have a full ammo clip, and then hit the ramp directly below and to the side of where the perch is. Once you hit the apex of your jump, press the Reflex Time button and unload into the Sniper. The primary goal is to not hit the ramp on an angle, as that will make your jump arc wider, but not as high. Once you get the hang of this, you will make short work of the Snipers. 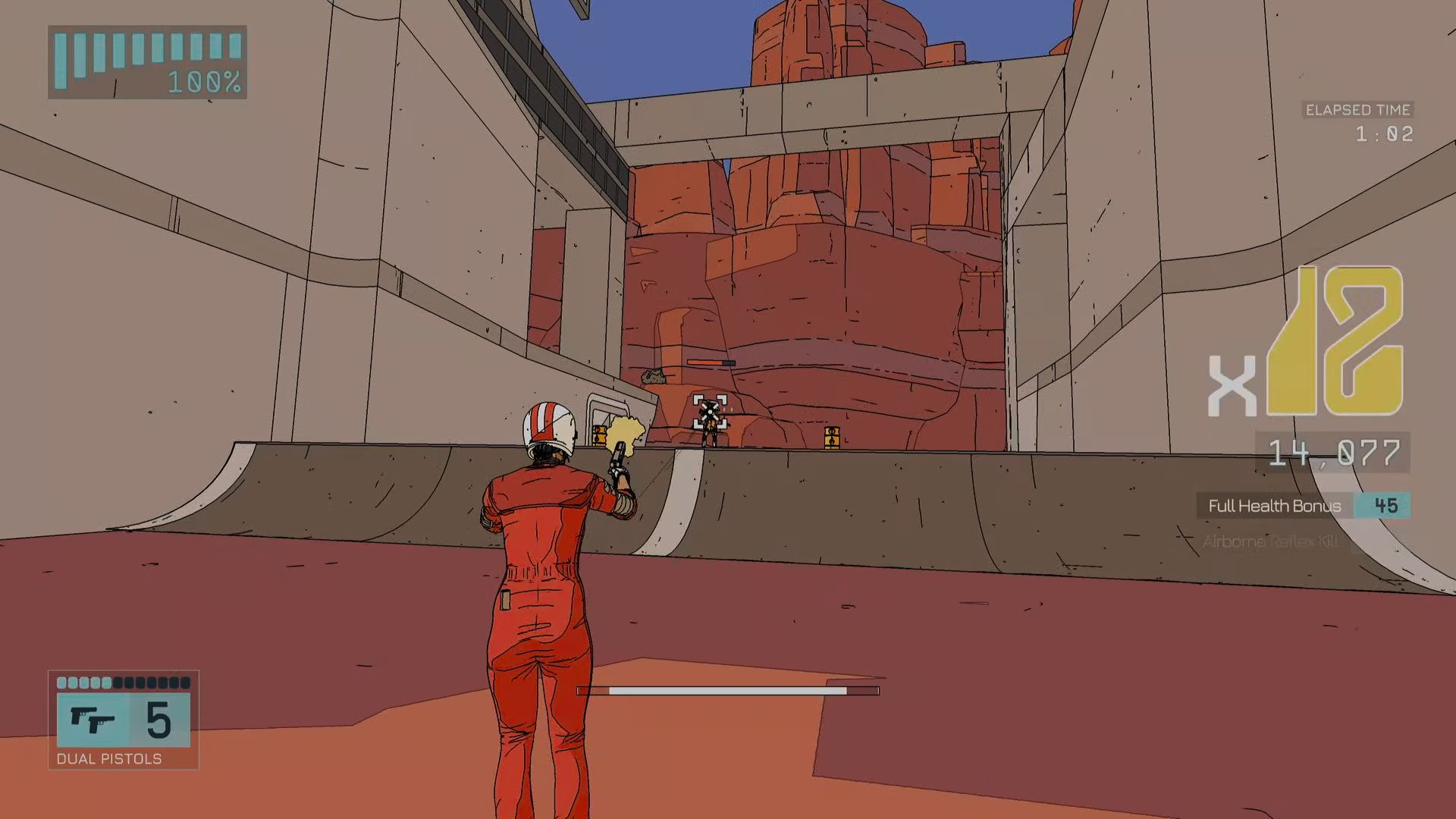 Now, as for the problem of the enemies spawning on the quarter-pike on the other end of the map, your best solution is to resist taking out all the Grunts and leave a few straggling in that middle area. That way you can quickly take care of them when you head back to the ramp, keeping your combo live. When you take out the Sniper who appears on the quarter pipe, leave the explosive barrels alone. Just unload your pistols into this enemy. The barrels will be better used when you come back again during the last phase of this encounter.

The only other issue you are likely to run into is the Warhead enemy types. If you try to pop off a shot here and there, dealing with them will be a tremendous headache, as they will spawn a shield that will protect them. So, instead, what you want to do is to not approach them until you have a full clip and unload it without stopping. If you do this, they will never have a chance to utilize their shields. It is absolutely the best way to get rid of them quickly. 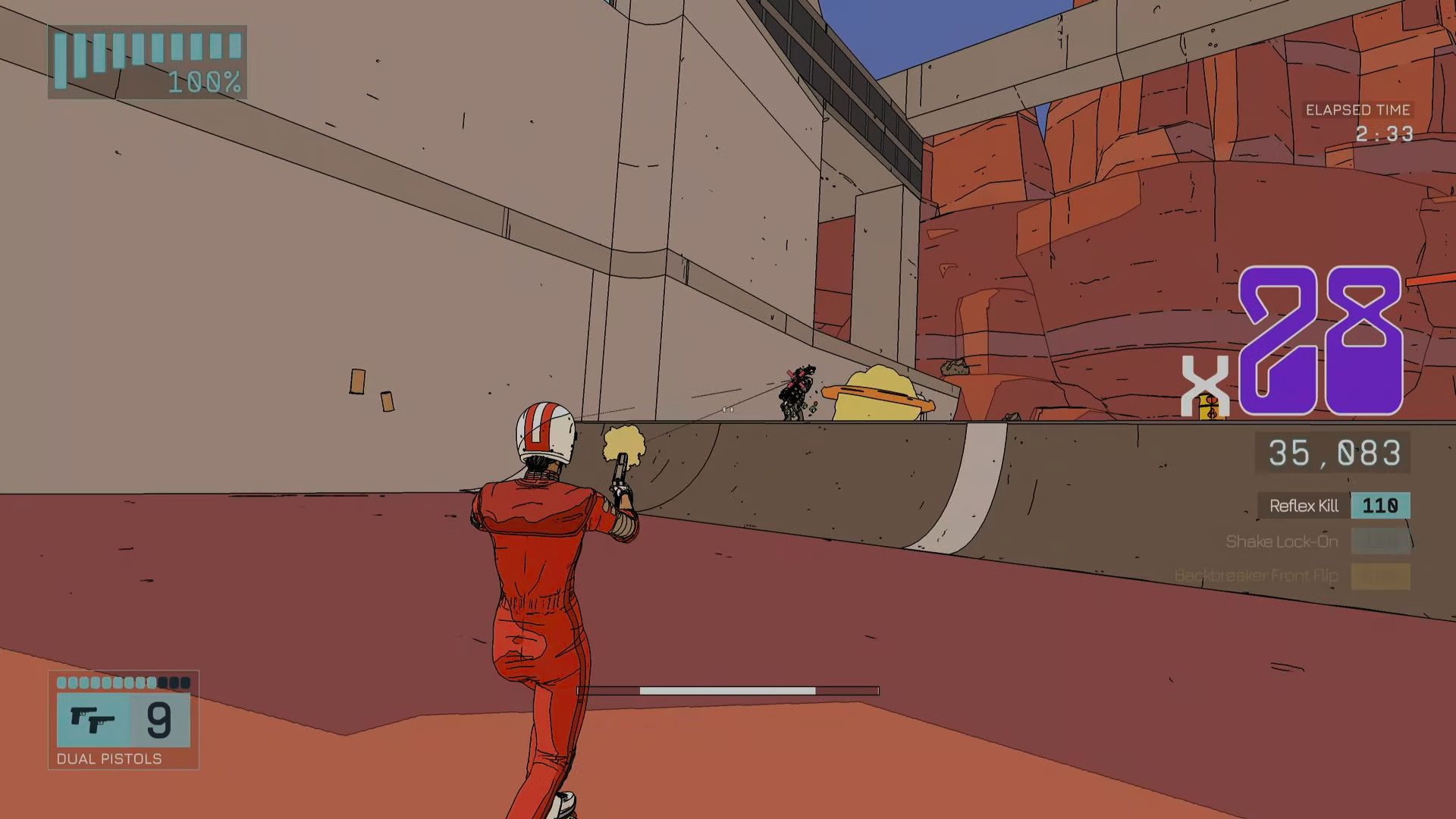 Alternatively, if they are near an exploding barrel, you can shoot it and then unload your gun into the Warhead enemy. The barrel won't be enough to kill them, but if you seamlessly switch to shooting them after hitting the barrel it will explode as you are shooting them, saving you bullets while also never giving them a chance to generate their shield. Though, obviously, this only works when they are standing next to an exploding barrel. 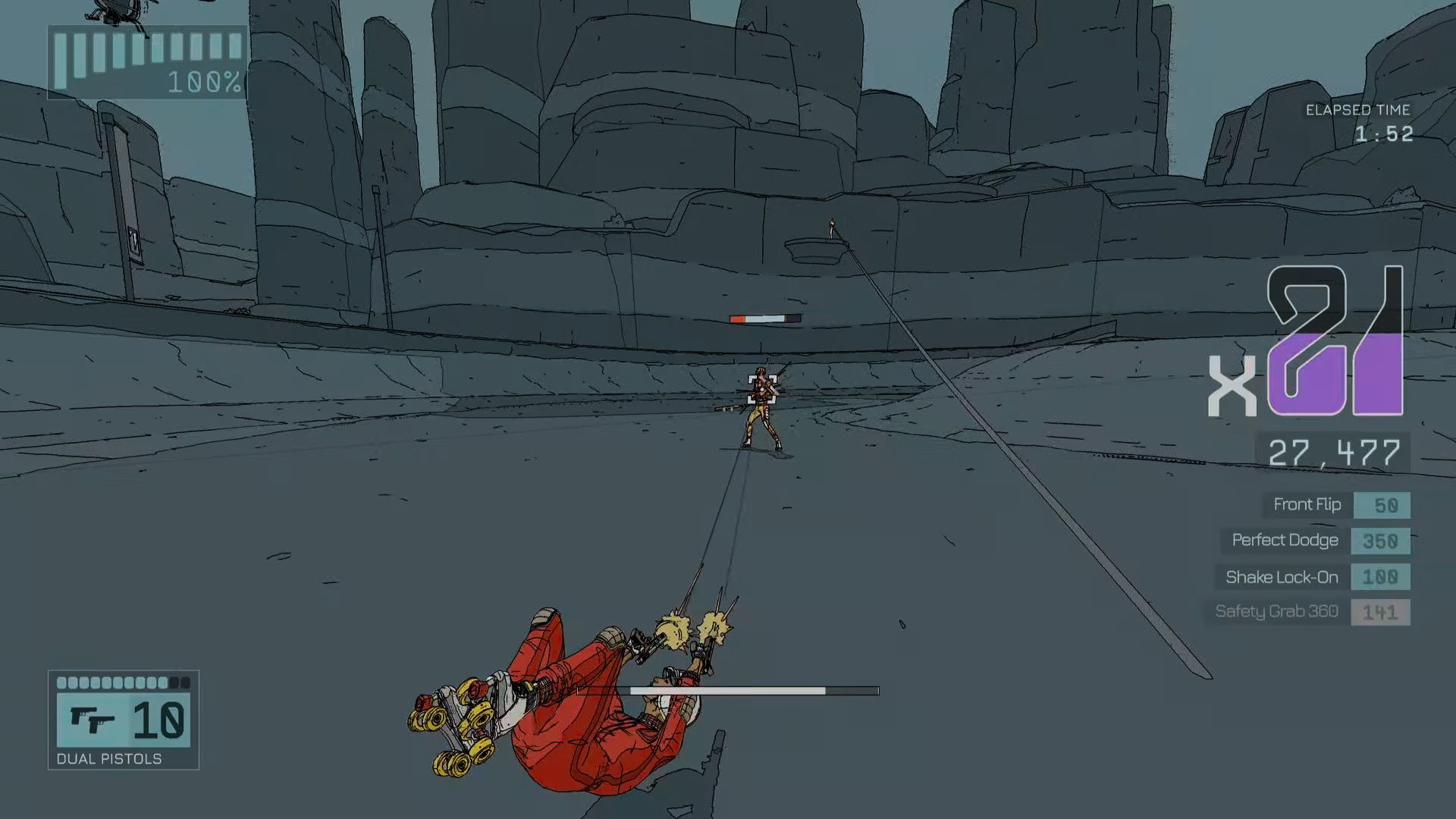 You will enter into Pike's Canyon by hopping into the arena via the quarter-pipe. Right away, you should grab the Combo Token as you enter the arena. Now, head down to the bowl at the back of the stage, but skip past the first bat-wielding Grunt. Take the Grunts out near the half-bowl and eliminate the snipers standing around the bowl. At this point, Snipers will start appearing on the crows’ nests.

The second you see those lasers appearing, go after the Snipers. Go straight up the ramp and unload your guns into them. The last thing you want is to have the Snipers be the final enemies that you need to take out in a phase; that is one way to lose your combo. Eventually, a Sniper will appear on the quarter-pipe. Make your way over to them. If your combo is running low, take out the grunt you spared at the beginning to refresh it. 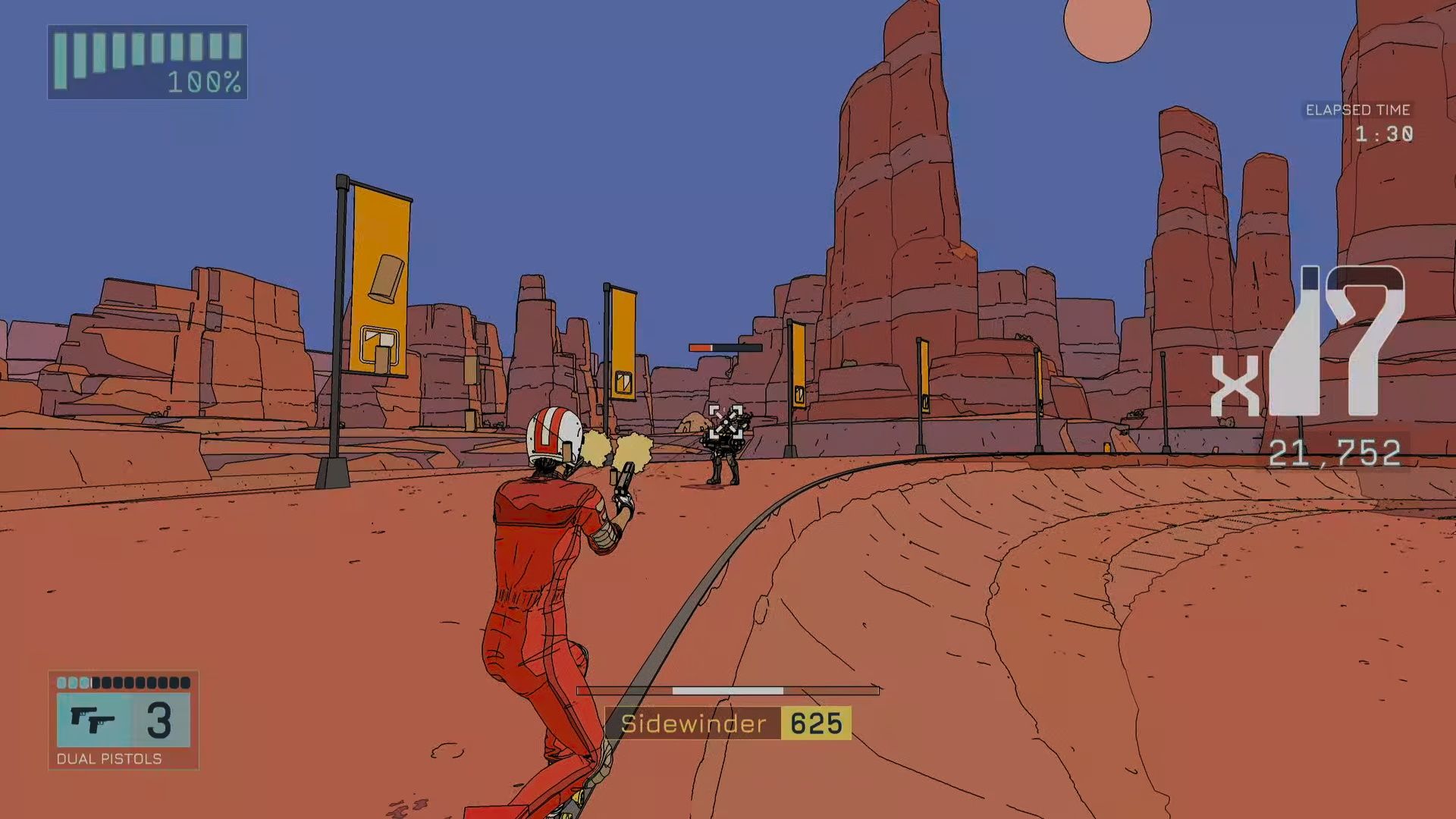 Once you eliminate the Sniper on the quarter-pipe (ideally not shooting any of the barrels), head back toward the other section of the map. You will have more Warheads to deal with this time around. Just approach them when you have all your ammo and unload into them before they can generate their shields. The final phase will have a Sniper and a Warhead appear on the quarter-pipe. Once you have cleared out all the remaining enemies, head over to them. If the exploding barrels are still there, you can shoot them to make quick work of these two.