Shadows Over Loathing is the third game in the Loathing series from Asymmetric Publications. They’re all RPG-style indie games with trademark stickman graphics set in a 1920s Lovecraftian version of the past, where terrible beasts from another dimension could be around every corner. But to say the universe is played for laughs would be an understatement.

It’s the bizarre world and lashings of cringe humor that have won the games an army of fans, and this latest installment doesn’t disappoint. Many of the familiar hallmarks are back, such as Meat as currency, Mysticality and Moxy as stats, and cutlery for weapons, plus hobos aplenty. Below you’ll find the gags that made us groan, and occasionally laugh out loud, the most.

7/7 Take That LOOK Off Your Face 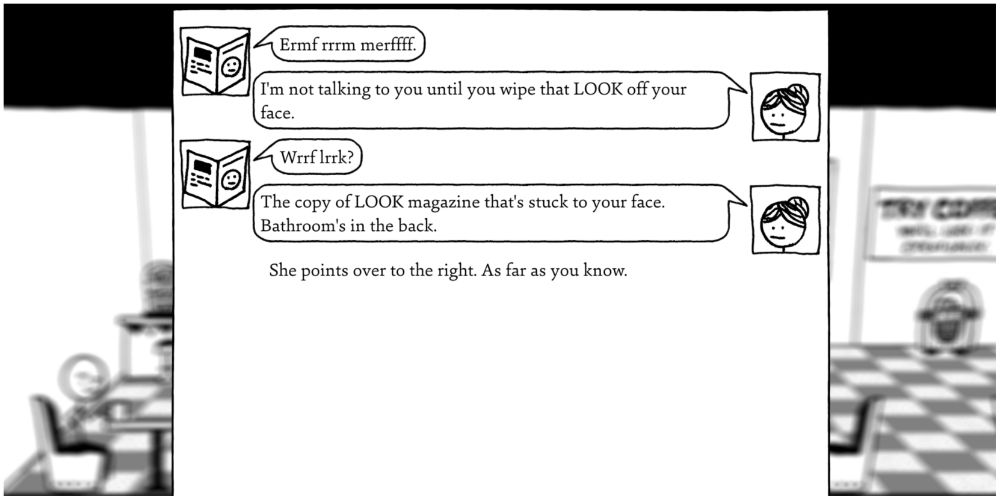 Shadows Over Loathing sets its stall out from the very first moments of the game. You begin by walking into a diner after a magazine has been blown in, and which has subsequently become stuck on your head — unless you walked into the road and died, which is another story altogether.

As you stumble around the diner, you speak to the waitress.

Yup, we’re in the right game. 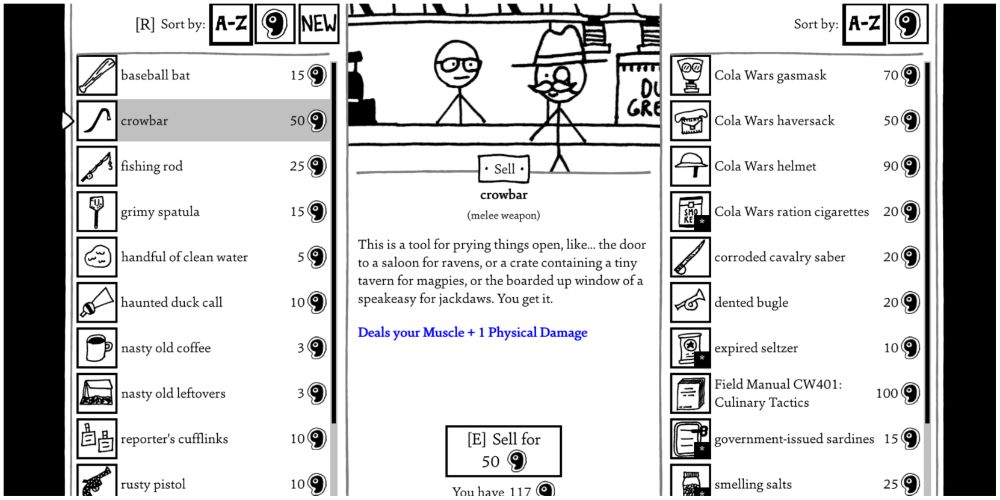 If you’re not going to set up hugely elaborate shaggy dog-style humor, a good way to hold an audience is to bombard them with a steady stream of gags. The latter is the Shadows Over Loathing approach, squeezing groaners into every possible nook and cranny.

Just try opening your inventory and reading some of the item descriptions. One of our favorites is the trusty crowbar. It reads "This is a tool for prying things open, like… the door to a saloon for ravens, or a crate containing a tiny tavern for magpies, or the boarded up window of a speakeasy for jackdaws." You get it. 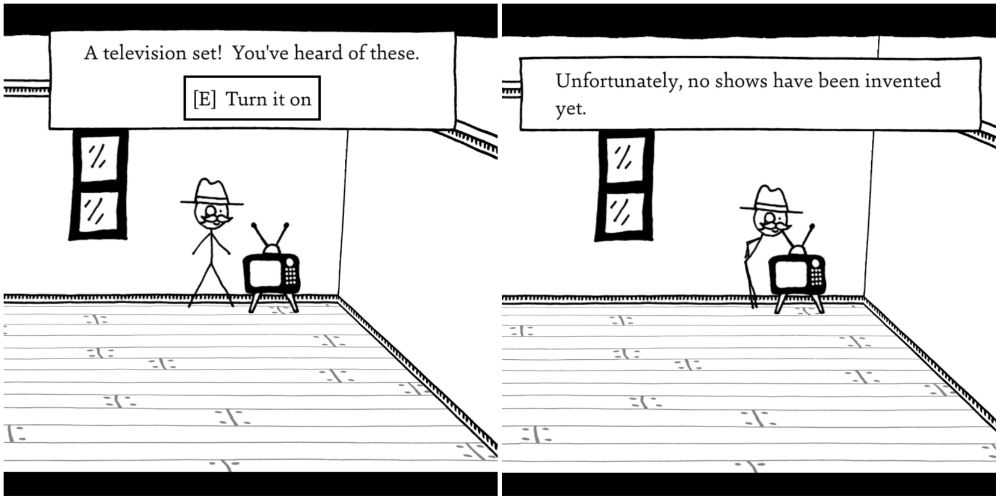 Due to the rather, ahem, low-res graphical style, it could be easy to forget that Shadows Over Loathing is set in the 1920s. The writing team keeps the game on course, however, by dropping regular verbal reminders as well as visual ones. And yes, many are in the form of jokes.

For example, when you finally get to move your stuff into your room at your uncle’s place, as you wander around the room, you’ll see a television in the corner. As you approach, you’re greeted by a speech box. "A television set! You’ve heard of these." However, in the next box, crushing disappointment. "Unfortunately, no shows have been invented yet." 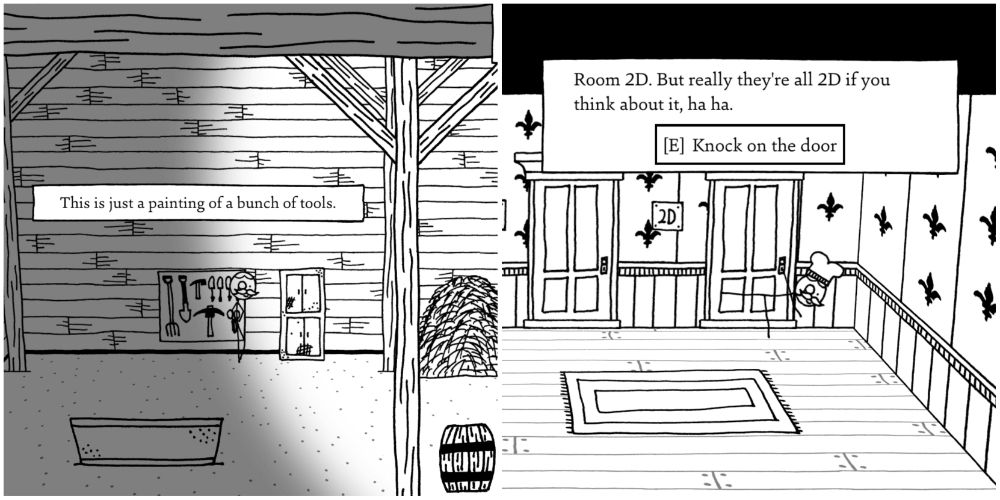 As alluded to above, graphically the game has its own style that’s quite a long punt from the AAA games on our shelves. With self-deprecation being a common form of humor, it is no surprise to find Shadows Over Loathing riddled with it. It takes the fact the art is basic and 2D and runs with it.

One of our favorite examples is entering a barn to see a tool rack. Ooh, free items or weapons you think, rushing over. But no, this is just a painting of a bunch of tools. Later, in a boarding house, you go to open room 2D. However, as the text reads, "but really they’re all 2D if you think about it, ha ha." 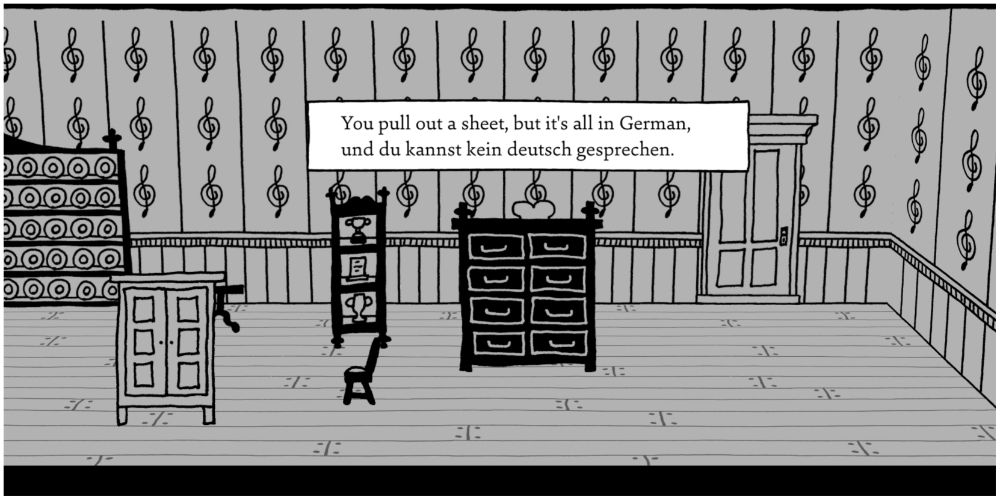 Not all the laughs are handed to you on a plate. Someone on the writing team is clearly well-educated, as both history and languages can throw up some funny asides as you work through the game. So, make sure you have a browser open and ready to get some cleverer gags.

Examples that spring to mind include referencing a ship called the Mustflower, and a reference to the Chinese philosopher Zhuang Zhou. This item in a chest of draws particularly tickled us, too. "You pull out a sheet, but it’s all in German, und du kannst kein Deutsch gesprechen." We’ll leave you to look it up. 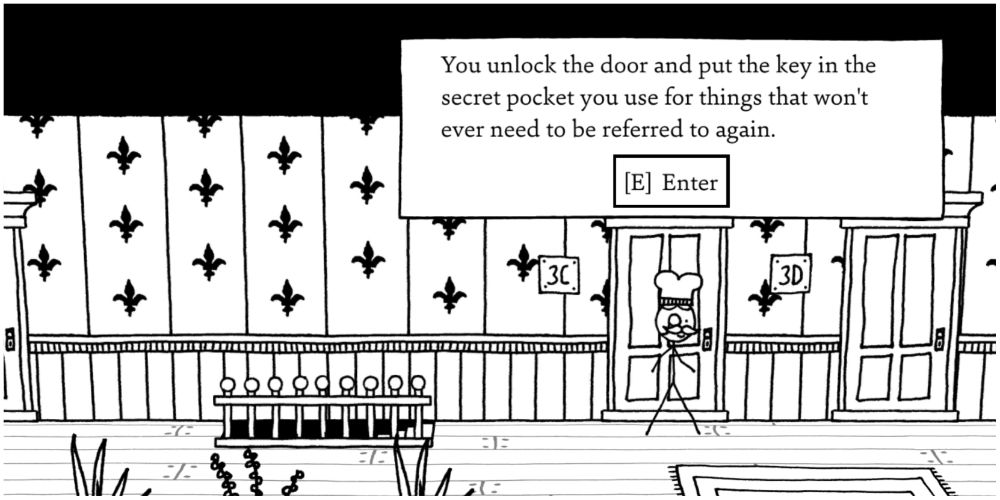 It’s not only the graphics and 2D styling that get the self-deprecation treatment. The Shadows Over Loathing team are clearly well aware that they’re hammering some well-known computer game RPG tropes, and they’re not afraid to laugh at themselves while they do it.

A good example comes back in the boarding house after you’ve been given the key to the room where a murder has taken place. "You unlock the door and put the key in the secret pocket you use for things that won’t ever need to be referred to again." I’d rather have a cheap gag than another useless item in my inventory! 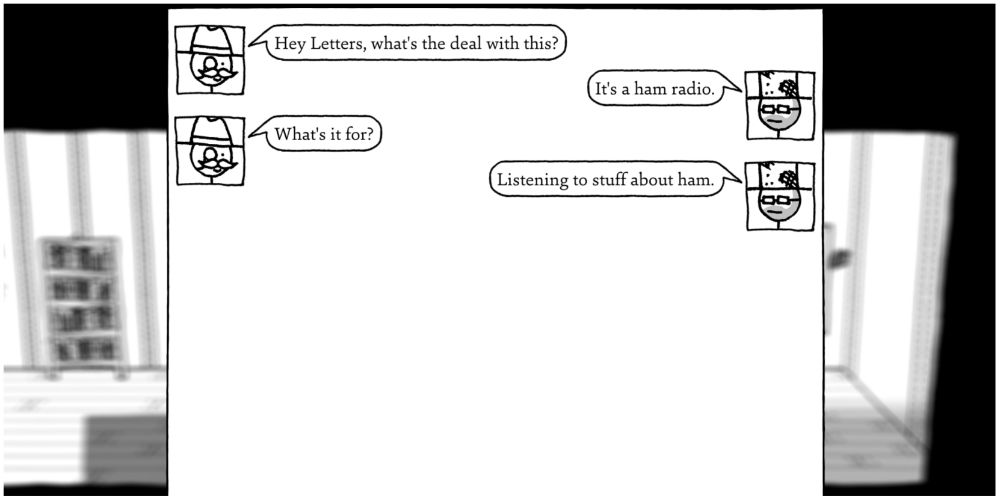 It would be remiss of us not to leave you with the Loathing universe’s stock-in-trade — some terrible, terrible puns. You can barely get through a conversation without one or two being thrown in, with the sheer weight of them eventually winning you over (if you haven’t already uninstalled in disgust, I guess).

You meet the Hobo King.

Or talking to another hobo, Letters.

I’ll get me coat.