I should make it clear; family plan subscription services are a good thing. Password sharing has obviously been a long-standing grey area for TV streaming services, but isn't always realistic if you and your friends both want to watch things at the same time. Being able to get a reduced price on an account for a service by essentially buying multiple accounts at once is the most consumer friendly thing these capitalist mega-corporations do.

For sites like Netflix, family plans are a smart way to spread the word of a show and in turn its own service. You and your friends split a monthly bill, watch Stranger Things, and then tell your other friends about the show and this handy way to save a bit of money, and then they sign up too with a bunch of other friends. This model makes even more sense for games.

The number of communities I know that already organise game nights just by looking at what’s on Game Pass is wild. I no longer have to buy a full priced game that might have support cut in less than a year, or that I’m only going to play once a week when I can coordinate my friends to be online. Instead, if my friends and I have Game Pass, not only is yet another bit of game night preplanning removed, but if one of us hates Back 4 Blood, hey, at least they didn't spend €70 on it.

That is why a Game Pass Family Plan sounds so stellar. Not only does it mean that those friend groups can come together for a discounted price, but it extends Xbox’s reach to a much wider audience: the non-gamer friends. I couldn’t count the number of times I have tried to organise game time with friends that own consoles but aren’t capital-G Gamers, only for it to fall through because one of them didn’t have Xbox Live or the game. But the idea of being able to say, “Hey, I am going to send you an invite to this thing that will give you access to hundreds of games and we can play online together whenever, and all you have to do is pay me a fiver next time we meet”? In theory that sounds like the perfect way to reignite my social life smothered by years of pandemic living. In theory. 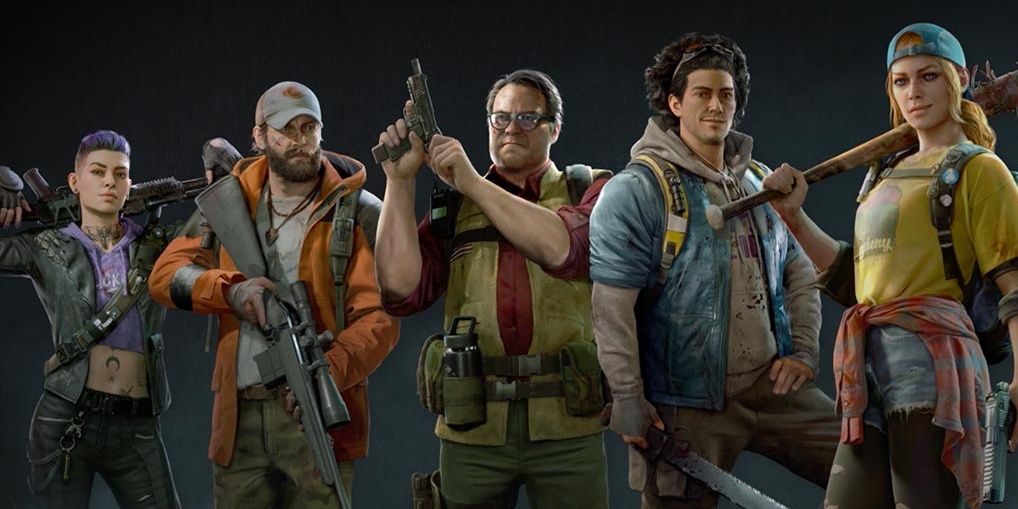 For some people (currently those living in Ireland, like me, or Colombia), this will most certainly work. Signing up your siblings or friends will be a great way to reconnect. For me though? Setting up an Xbox Game Pass Family Plan has been a bit of a social nightmare. Some of these reasons are understandable, some of them are on me and no fault of Xbox, but others feel like distinctly consumer unfriendly choices by a company which up until now has taken every opportunity to get into gamers’ good graces.

The most reasonable hurdle I ran into was finding friends in my country that actually owned an Xbox. The Game Pass Family Plan is currently region locked and will likely remain that way once it officially releases. This might just be the circles I run in, but Ireland has always felt like a bit of a PlayStation-centric country. The 360 was massive here, but mostly Ireland has been on Team Sony. I’m pretty sure I’ve only ever seen a handful of Xbox Ones in second-hand stores or friends’ houses, and since the start of this generation I only hear about friends trying to track down PS5s for sale, not Series Xs.

With most of my local friends owning Sony machines, I looked online. Eventually after about a week of DMing, I found three Twitter mutuals to share this five person plan with – that would be enough to test this. It wouldn’t be the best value, but if we split the €21.99 a month four ways it would still be cheaper than each of us paying €9.99 a month. As much as I hated this process of cold call messaging people, this felt like an understandable concession. Of course, this service is region locked as it’s intended for families, but I can’t help but feel like many families become vastly more spread out than ever before as children reach adulthood and often move to different countries. 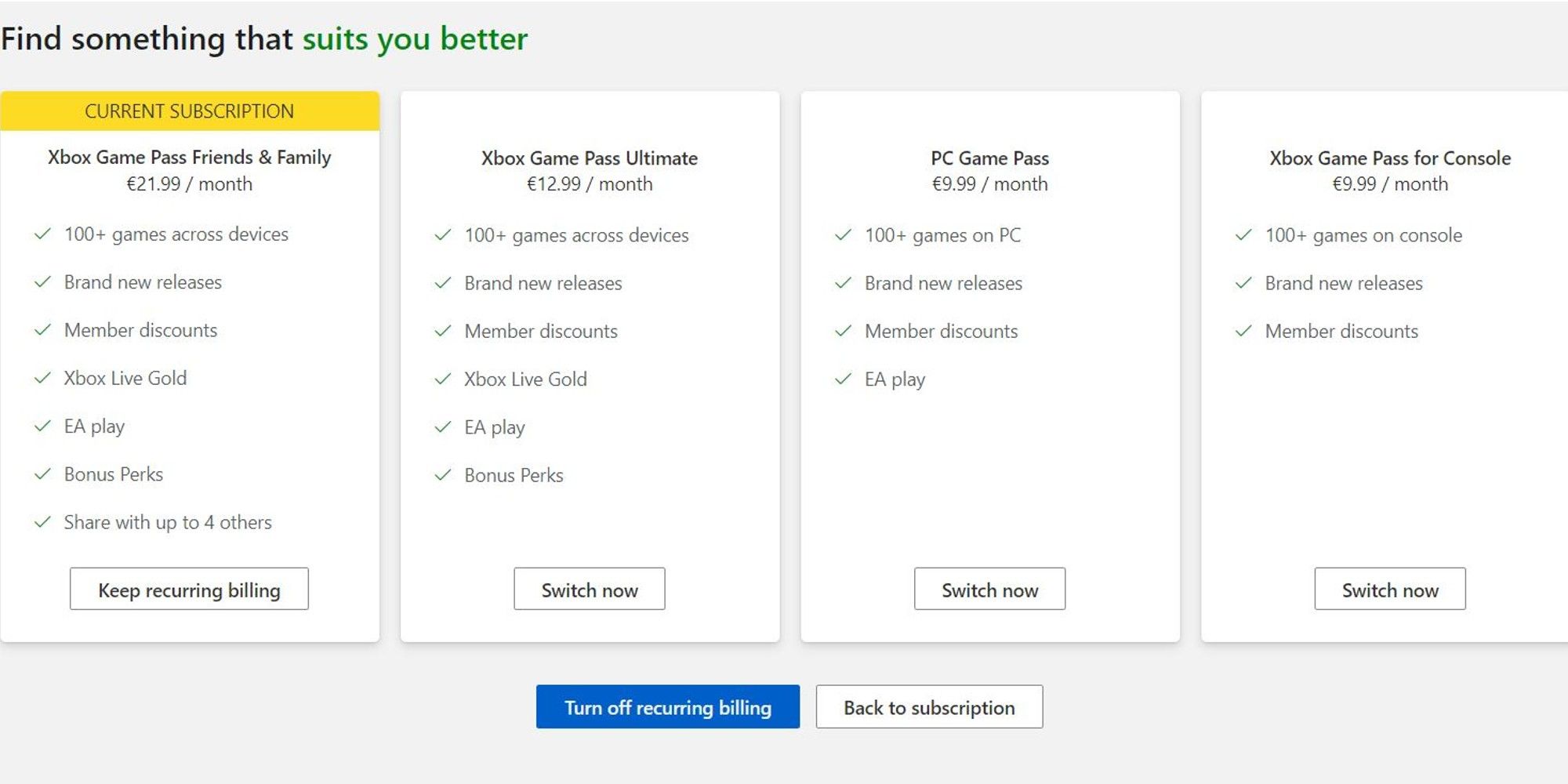 But fine, I get why a company would design a system this way. For one person, it all worked great. They had just gotten an Xbox and hadn’t even made an Xbox Live account yet, so I had basically offered them a no strings attached Game Pass for a month. I sent them an invite via the Microsoft website, they accepted, and they were off to the races. All the games, all the cloud streaming, online play, everything! The other two however quickly sent me back a message:

“If you want to join immediately without waiting for your remaining [Game Pass] time to expire, check the box below and select Join. This will cancel your current subscription(s), and you’ll now give up all of your remaining time. Note that you will not receive a refund. This action is final.”

Both players had previously availed of Xbox’s consumer-friendly programme back when Microsoft made Xbox Live Gold a monthly subscription only. This allowed people who had bought up to three years of Gold subscriptions to convert them into Xbox Game Pass Ultimate subscriptions. As a result, some players still have years of GP Ultimate prepaid for. However, now, the company that once told them they could stack subscriptions for later was telling them that in order to join my Family Plan, even for a month, they would have to ditch all their stacked months.

It’s also worth noting that I control this plan. I invited them to it, and it is set to be a recurring monthly bill. Since I was just testing this, I was only going to subscribe for a month and warned the others joining the plan of this, but as far as I know, they did not receive any notification when I turned off recurring billing. This means it’s not out of the question that you could sign up for a family plan with acquaintances to save money only to turn on your Xbox one day and find out the host hadn’t paid for this month.

Obviously the friends with stacked Game Pass Ultimate months didn’t accept the invite and after the whole ordeal, I was too embarrassed to ask the last one to pay their €5, let alone the €11 they would actually be paying with only two of us on the plan. Not everyone has just bought a console. People already have these subscriptions and still want to share, but after a month of trying to set this all up, I currently have a family plan I am paying €22 for, with just one other person actually on it. The Game Pass Family Plan might be good business on Microsoft’s end but, boy, does it feel terrible as a player.