Sins Of A Solar Empire: Rebellion is a big game. Sure, you can play a smaller-sized game if you want, but even then, there is a lot to Sins that isn’t just visible size. The underlying mechanics for the game’s core structure is rich and vast in ways many games simply aren’t.

The first major decision you will make in Sins Of A Solar Empire is what Faction you are going to play. There are a total of six to choose from, and they are pretty darn varied. Understanding the wave of information that comes from just checking the Factions can be overwhelming, but don’t worry, we’ve got you covered. 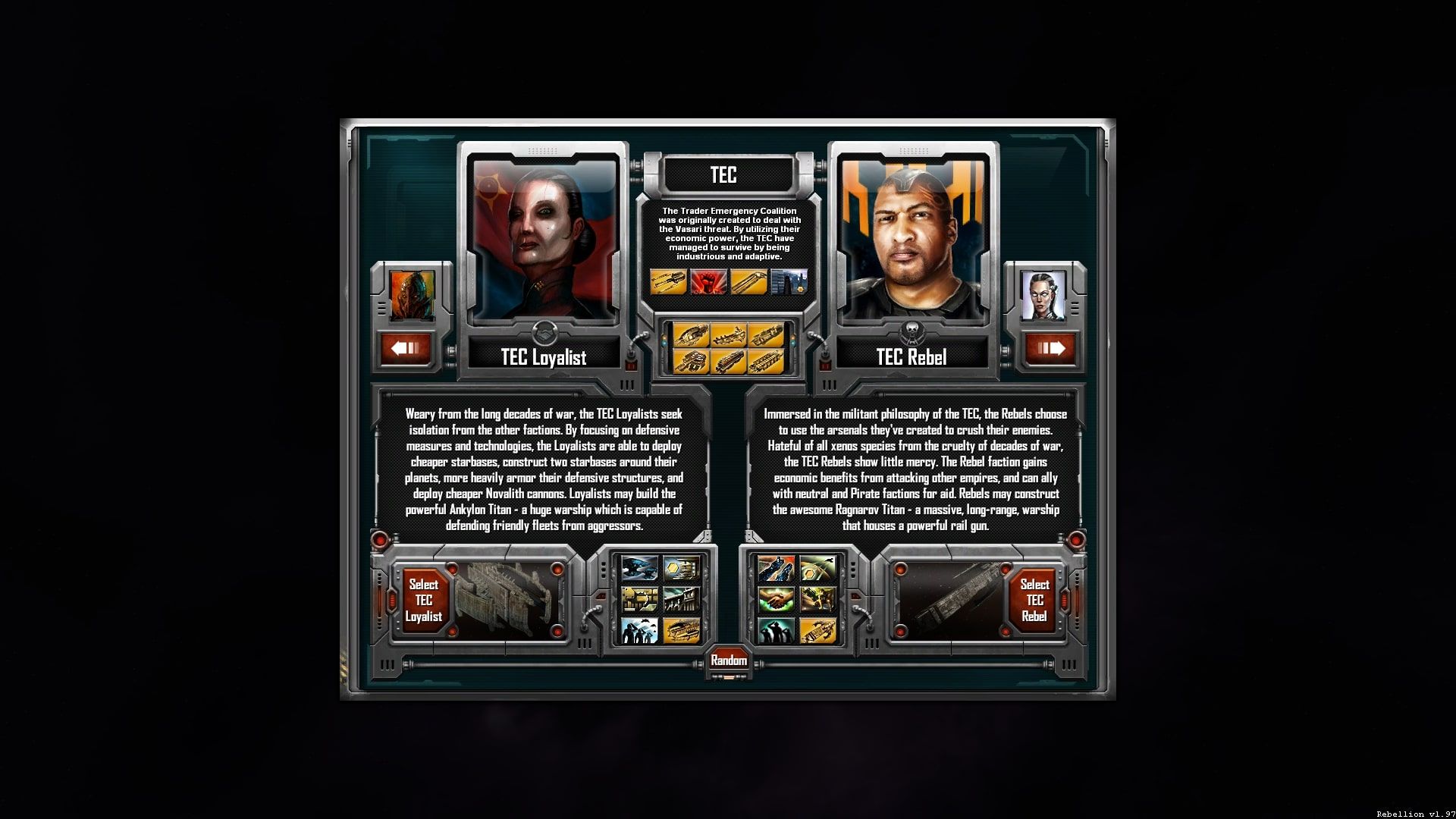 The TEC are the go-to race for beginners. They are, by far, the most straightforward to get into and do well with. This is down to cheap and easy-to-understand units and technologies. You can quickly produce fleets at prices that put every other faction to shame, and depending on your sub-faction, you can even produce incredibly powerful defences – again, at a discount.

As a general rule, TEC should use their incredibly potent early game to carry them into their even stronger late game. What they lack in nuance, they more than makeup for in brute force.

TEC Loyalists are the original TEC faction. They will likely be the faction newbies veer towards, and this is fine. They have very potent defensive structures and can produce them on the cheap. This does lead to newer players heading down the path of the “Turtle”, which is not great in the early game where aggressive expansion is preferred.

You will want to use your TEC advantages to push for an aggressive expansion to claim as many planets as you can, and then once the game shifts into the mid-late game, you can start getting your defences up and running. TEC can reinforce like no other, and with access to multiple Starbases per planet AND the Novalith Cannon, they are very difficult to shift once they dig their (space)boots in.

Tech Rebels are the nefarious offshoot of your standard TEC Loyalists. They lose some powerful abilities, but in return, they get some very potent units. The big winner here has to be the Ragnarov, which can decimate fleets. Not only that, but they have access to the very nice Truce Amongst Rogues. Basically, Pirates are your allies. This makes your early smoother and gives you a leg up against your opponent who will be forced to deal with an extra mini-faction. Throw in bonuses to bombardment and ecconomical advantages for doing so, and you have quite the faction.

TEC Rebels don’t push the Turtle-strat anywhere near as hard as TEC Loyalists, and this makes them a slightly better starting faction. Turtling is not something you want to rely on in Sins Of A Solar Empire – not at first anyway. TEC Loyalists can instil bad gameplay habits that TEC Rebels simply don’t. 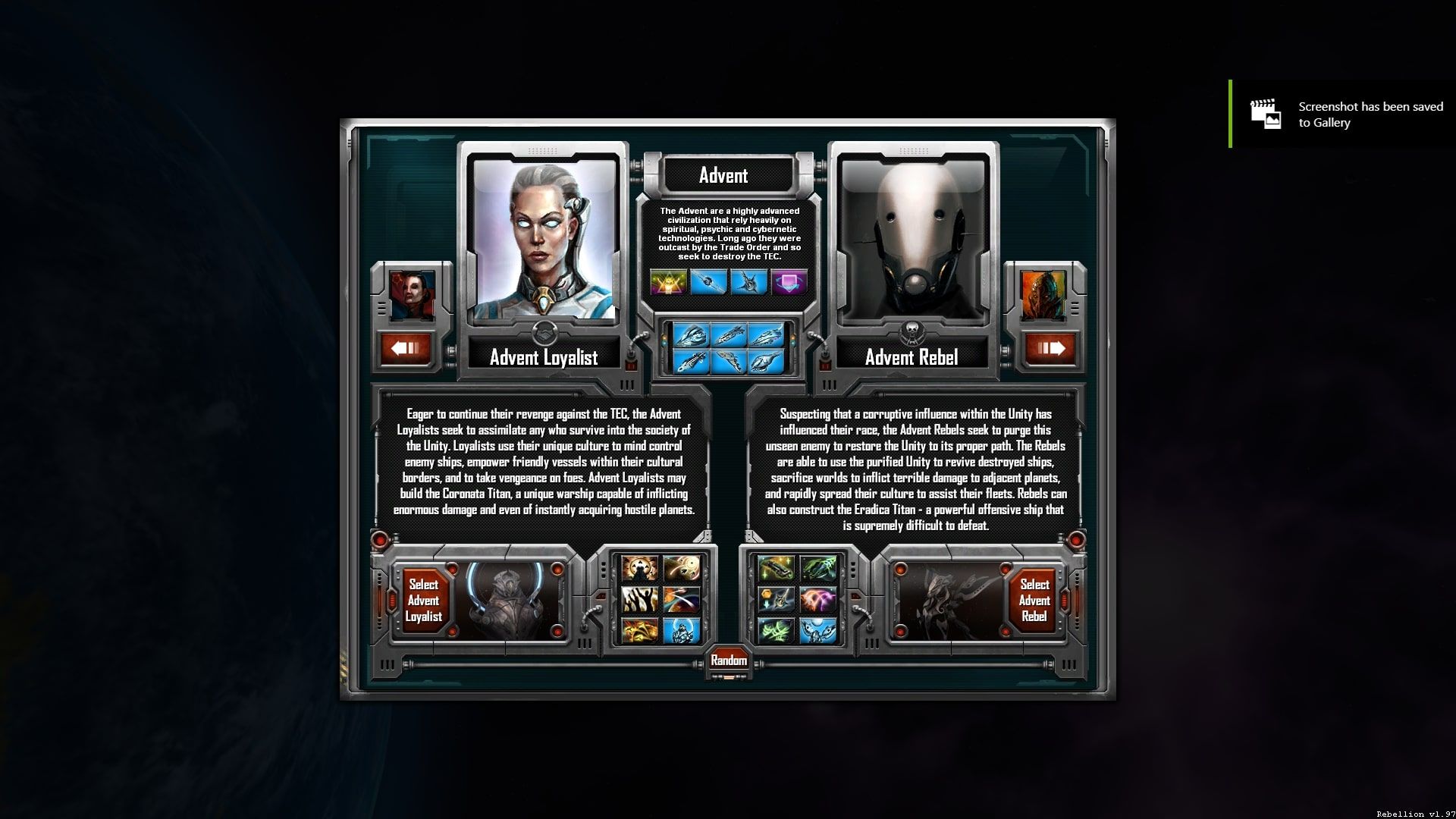 If TEC are the cheap and cheery iron fist of Sins Of A Solar Empire, then Advent are the hyper-expensive and advanced butterfly. Advent units are noticeably more expensive than their competitors, and in a straight-up fight, they aren’t necessarily better. This is because their ships need to synergise with each other using overlapping special abilities.

Topping off the general playstyle of Advent, they have an exceedingly weak early game making them easy targets for powerful early-game factions like the aforementioned TEC. This is partly thanks to their expensive units, but also because their economy is pretty dire. Survive the early game, however, and Advent becomes a military powerhouse. They are not advised for new players.

Surprise, surprise, Advent Loyalists are not a straightforward faction to play. This is in part due to their specialisation in Culture. Culture is not a bad thing of course, and it can absolutely win you games. There are even technologies that make this even easier. The catch? Culture-based victories can be turned off, and, on top of that, they are pretty hard to pull off.

This leaves Loyalist Advent with less combat-focused tricks – but that doesn’t mean they are pushovers. In fact, Loyalist Advent can produce some of the best fleets in the game and have multiple ways to mess with not only your own stats but your opponents. Then you have the wonderful ability, Coward’s Submission which converts fleeing enemies into fodder for your fleet. Heck, even that Culture focus can be used to boost your units, giving it some utility.

As with Advent in general, Loyalist Advent are hard to learn, and harder to master.

Where Loyalist Advent are tricky little buggers, Rebel Advent are a bit more straightforward in their approach. This makes them slightly easier to grasp in general, but they still retain that classic Advent complexity that defines the faction.

Where Rebel Advent shines is, interestingly, in attrition. Destroyed ships in their fleets can be returned to your homeworld, allowing you to quickly reinforce your fleets with the recently deceased. It is much harder to grind a Rebel Advent down as a result. Throw in some amazing abilities – such as nuking a planet to eradicate everything in neighbouring systems, and you have some interesting gambits you can pull in a pinch. 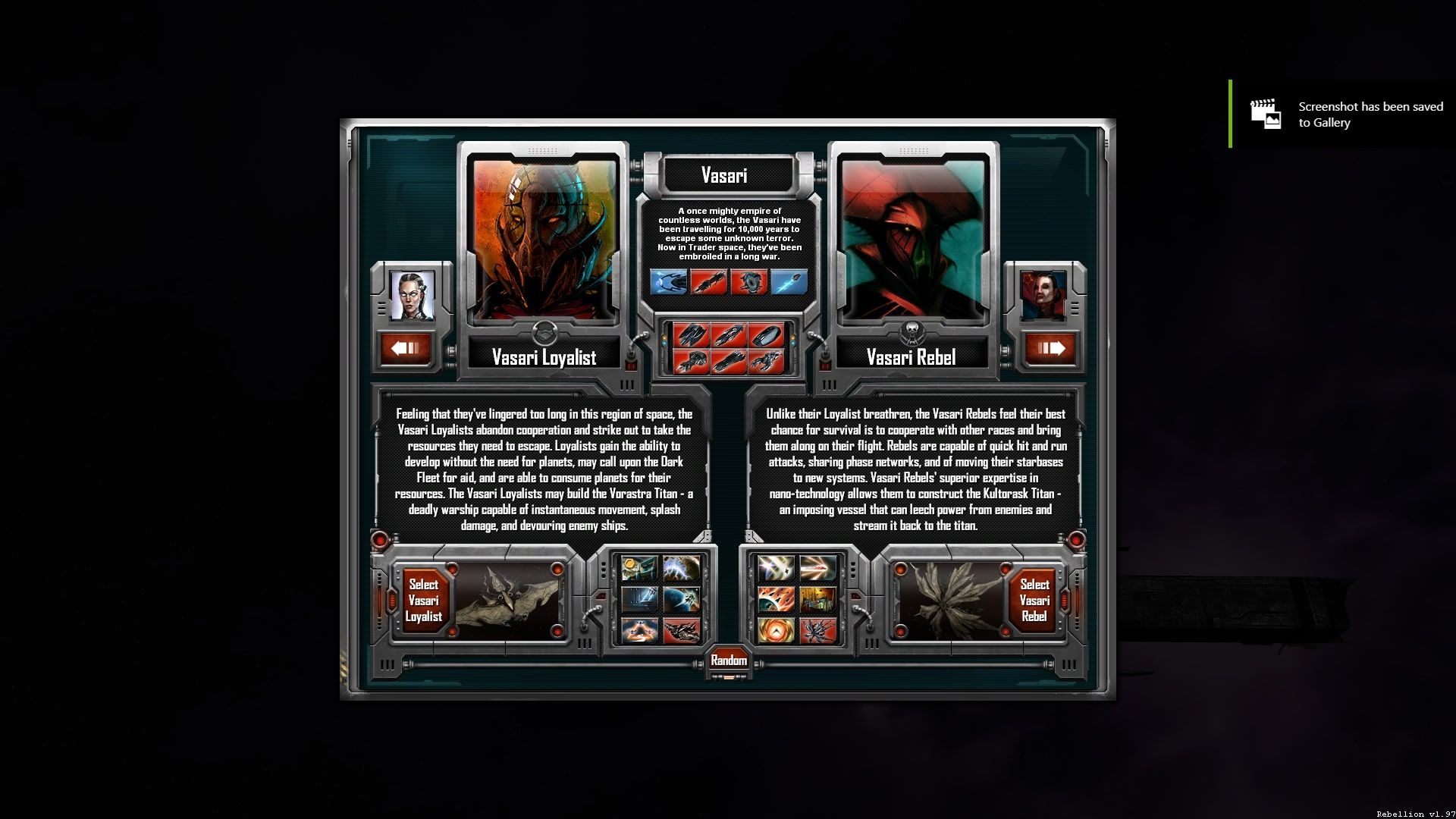 In a traditional 3-way strategy game, you’d expect to have two extreme factions, and then one “balanced” faction to balance it all out. Sins Of A Solar Empire is NOT like that. Vasari are absolutely their own unique beast, and playing them opens up tricks that no other faction can compete with.

Vasari have strong fleets – they just so happen to be a bit smaller. They make up for this with incredible technology. Vasari can attack star systems from a distance using the Kostura Cannon, they can create their own lanes to open up unexpected attack opportunities, and they can even bypass enemy shields, making them staggeringly effective on the attack.

Vasari have a weaker early game than TEC, but they have a leg up on Advent. Vasari are pretty complex to learn, but we would say they are slightly easier to grasp than Advent, making them a decent starting faction for beginners.

Vasari Loyalists are the trolls of Sins Of A Solar Empire. Their main trick is the devouring of planets. As this suggests, this destroys said planet. Vasari can absolutely eat their own planets, and with the right tech, they can even survive with no planets. However, the trolling really comes into play when you use this against your opponents.

Planets in Sins Of A Solar Empire are needed to keep your economy afloat. Fewer planets simply mean fewer resources to fuel the war effort. Vasari can capture a planet and then eat it. This will give the Vasari more resources and permanently strip resources from their enemies. You can do this over, and over again and win through the sheer force of their economy.

Even TEC will eventually fall to this if you pull it off effectively. Advent are especially vulnerable to this as their economy is already on the naff side.

Vasari Rebels are just as interesting and weird as their Loyalist cousins. They continue to have a focus on mobility and powerful phase missiles, but they also have the ability to yeet starbases across the universe.

Starbases are pretty darn powerful defensive structures, and with the right tech, Vasari Rebels can move their defences to the exact planet they need them. This is ludicrous, of course, and makes Vasari Rebels pretty hard to shift. But of course, being Vasari, they still manage to have excellent offensive capabilities, so they occupy this wonderful space where they can attack and defend in equal measure. Not only that, but with Phasic Strike, you can excel in hit-and-run warfare.