There is no shortage of ways to play Skyrim, with too many combinations of race, abilities, skills, weapons, armors, factions, and other factors to easily count. If you’re looking for some ideas, consider becoming a vampire. These powerful creatures are capable of unique abilities that others dread having to face.

If you’re looking to become a vampire, it isn’t too hard. For everything you need to know about this transformation, and the unique perks (and disadvantages) it comes with, look no further than this simplified guide. 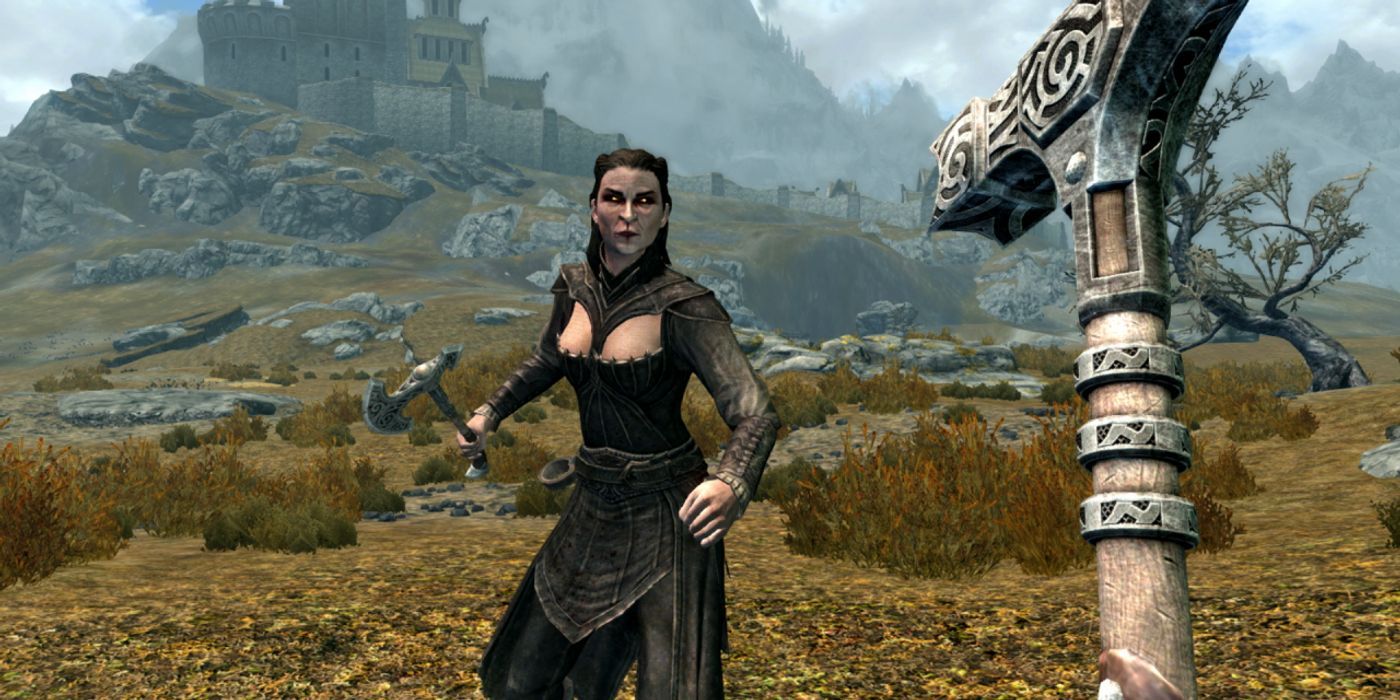 Vampires in Skyrim are mostly in-tune with the basic idea of a vampire in our wider culture: undead beings that hate sunlight, feast on blood, and have heightened superhuman abilities.

Any race in the game can become a vampire, and they can be found in every corner of the world. Vampires have a different physical appearance than non-vampiric members of their race, including glowing red eyes, fangs, and pallid complexions.

With the Dawnguard DLC expansion, the role and lore of vampires in Skyrim was widely-expanded, and that will be covered here. 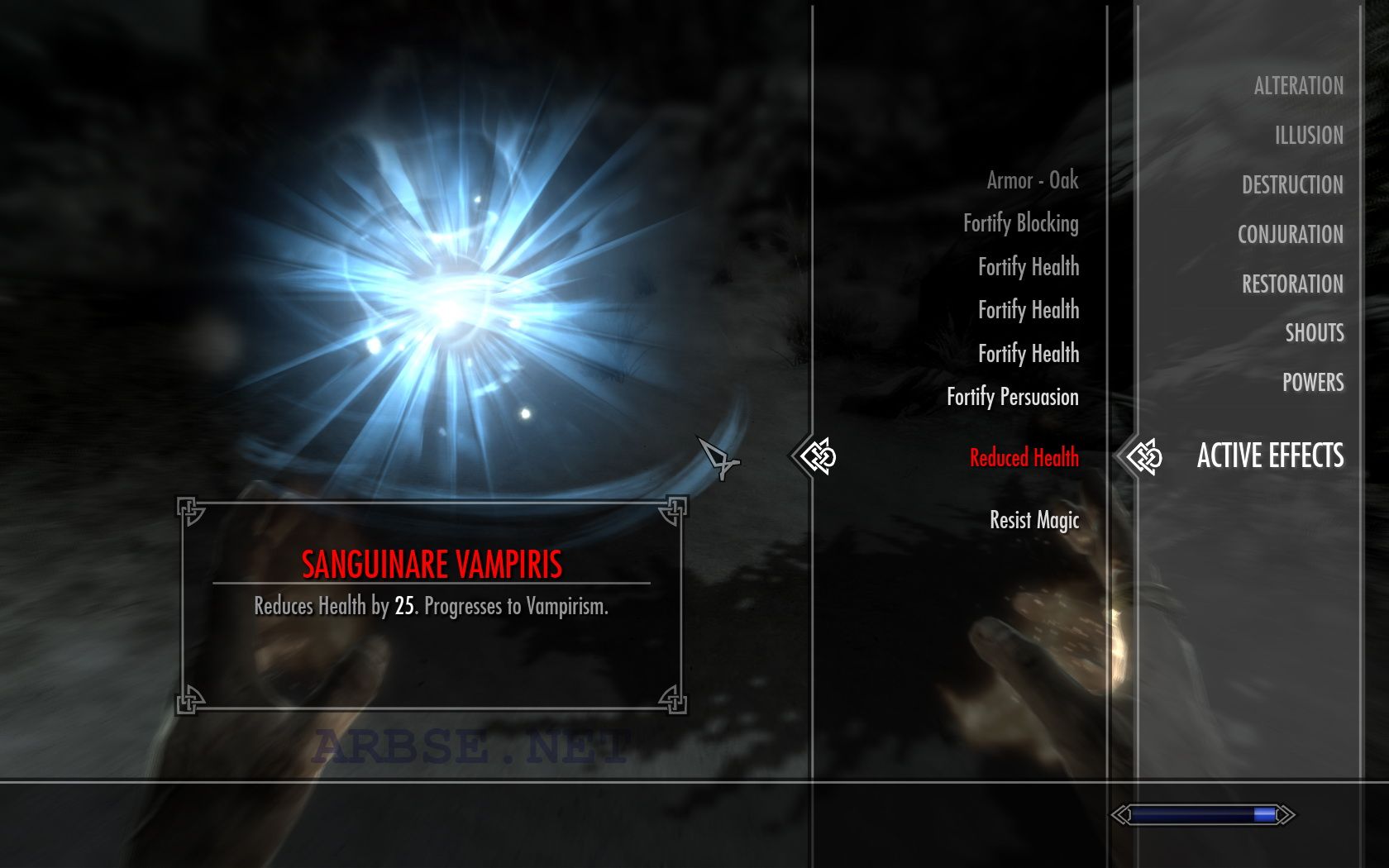 If you’re looking to become a vampire, you’ll need to find a way to contract the virus Sanguinare Vampiris. This strange virus infects a host and slowly converts them into a vampire over a course of three days.

When a vampire uses the spell Vampiric Drain on you, there’s a chance you may become infected. You can also become infected by weapons that vampires use. Being hit by the spell or a weapon doesn’t guarantee transmission, though — there’s about a 10% chance of it passing to you.

Once you’ve been infected, it takes three in-game days to progress to full conversion into vampirism.

It’s also worth noting that you cannot contract Sanguinare Vampiris nor can you become a vampire if you are currently a werewolf. 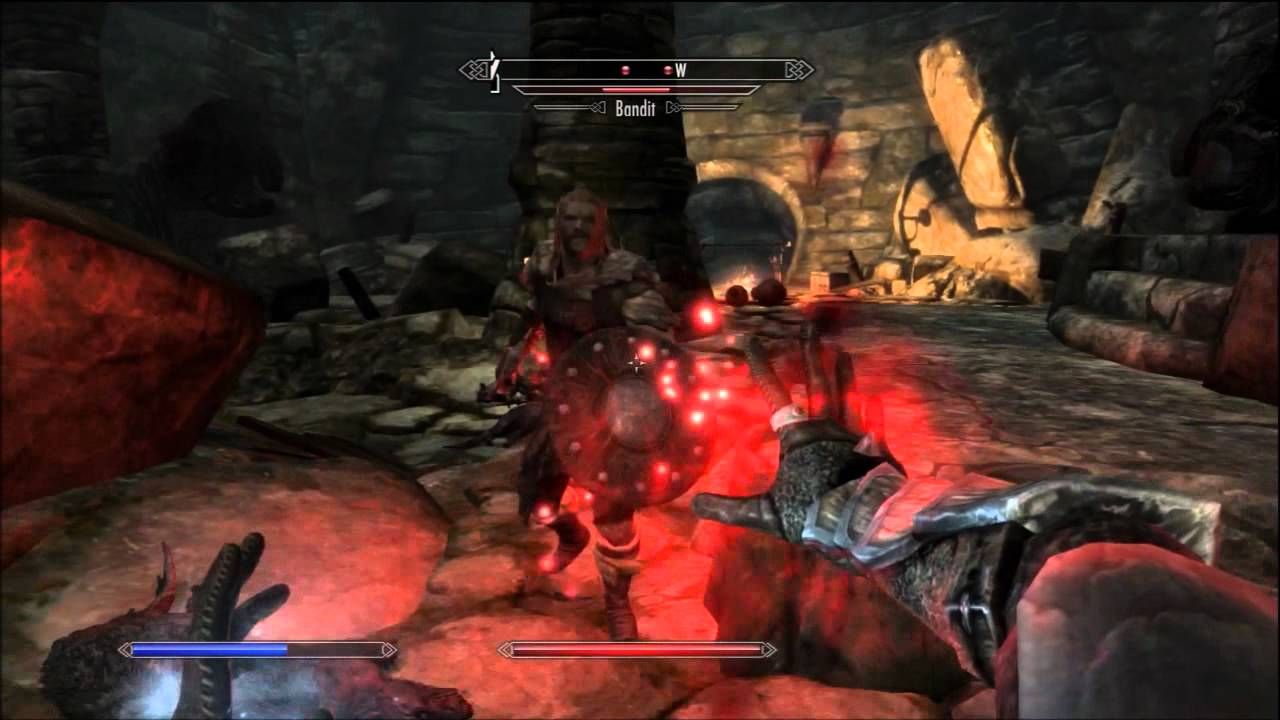 So, you’re trying to make up your mind on whether to cure Sanguinare Vampiris or let it progress to full vampire status? Here are the major pros and cons to consider.

Being a vampire comes with four stages that you’ll need to pay attention to, with each stage determining certain buffs and debuffs. Every 24 hours that you go without feeding will advance you by one stage. Feeding will reset you to stage one.

At stage one, you’ll have a 25% resistance to Frost, but a 25% weakness to Fire. (20% to both with Dawnguard). You’ll have access to the spells Vampiric Drain, Vampire’s Servant, and Vampire’s Sight. You’ll also be weaker to sunlight by 15 points.

At stage two, you’ll have 50% resistance to Frost and 50% weakness to Fire (30% to each with Dawnguard). You’ll be weaker to the sun by 30 points, but you’ll gain access to the ability Vampire’s Seduction, which allows you to calm targets once a day.

At stage three, your resistance to Frost and weakness to Fire both rise to 75% (40% with Dawnguard). Your attributes will weaken by 45 points in sunlight. At this stage, most NPCs will not interact with you.

At stage four, you’ll have 100% resistance to Frost, but 100% weakness to Fire (50% in Dawnguard). You’ll have a 60-point weakness to sunlight, but you’ll gain access to the ability Embrace of Shadows, which is a once-daily ability that lets you become invisible with night vision for three minutes. At this stage, NPCs will become hostile and attack you on sight.

With the Dawnguard DLC, you’ll be able to progress to a Vampire Lord — more on this later! Additionally, with Dawnguard, NPCs no longer react with hostility to you at the regular four stages of vampirism.

There are additional effects to being a vampire that occur regardless of which stage you are at. They include the weakness to sunlight, stunting stamina, health, and magicka by the amounts listed above, and removing their ability to recover when in sunlight.

As a vampire, you’ll have 100% resistance to both disease and poison, as well as the Nightstalker’s Footsteps ability, which makes you 25% harder to detect while sneaking. Champion of the Night is an ability vampire’s gain, as well, which grants a 25% power boost to Illusion spells.

If you choose the Necromage perk as a Restoration skill perk, you’ll gain its advantages, since vampirism classifies you as undead. This gives a 25% boost to all buffs, debuffs, and enchantments. 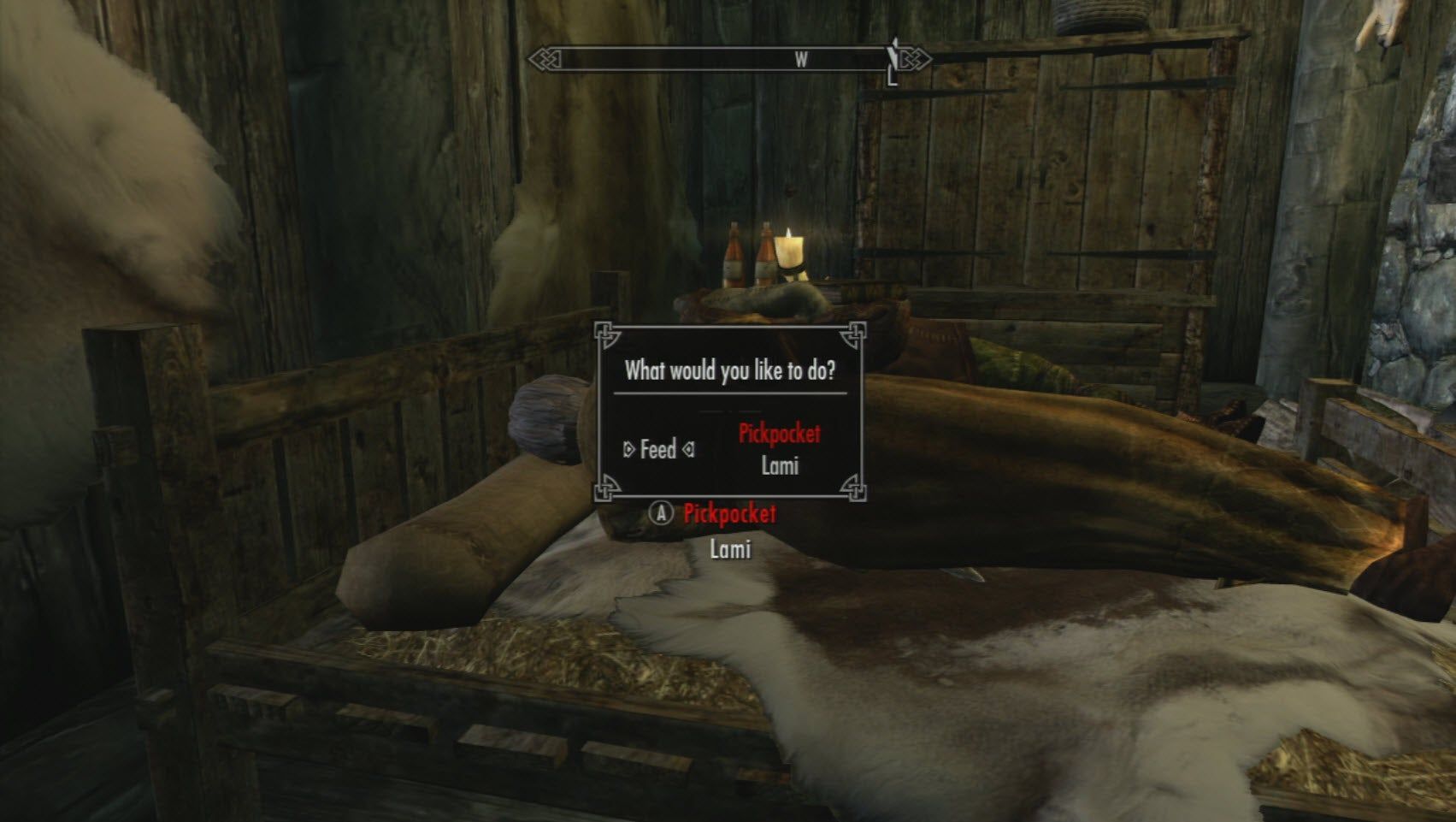 As a vampire, you’ll need to consume blood for a few reasons.

Keeping yourself at stage one of vampirism is helpful to prevent a serious weakness to Fire, keeping your debuffs in sunlight as low as possible, as well as allowing you to blend in and not be attacked.

However, with the Dawnguard add-on, there’s very little reason to feed, as NPCs no longer attack you at stage four and the weakness to Fire is reduced heavily. However, you still have a debuff in sunlight even with Dawnguard, though this can be counteracted with the right gear enchantments.

If you have the vanilla game though, you’ll probably want to know the necessary information about feeding. Here’s how it works:

For every 24 in-game hours that you don’t feed, you’ll progress a stage in vampirism, up to stage four. Feeding resets you back to stage one. Without Dawnguard, you can only feed on sleeping humanoid characters. Approach them and click the interact button that lets you pickpocket them, but instead choose “Feed.”

If you are not a Vampire Lord, there is no real detriment to feeding. The person does not die, become a vampire, or even notice you most of the time. However, continued feeding will increase the chances of them waking up, much like pickpocketing.

With Dawnguard, you can now feed on conscious people. However, you’ll need to cast the Vampire’s Seduction spell first, which can only be used once a day and is not available at stage one. Plus, it only affects people at certain levels, so try not to pick anyone too strong. 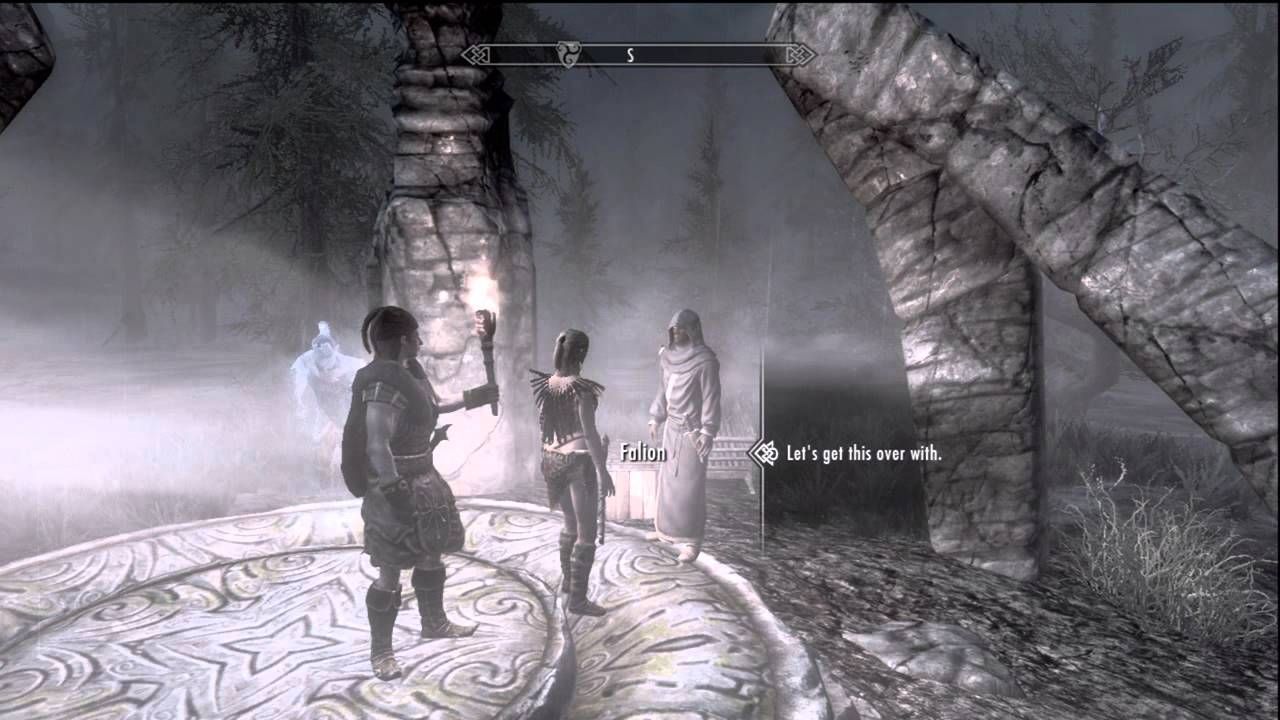 Tired of being a vampire? Don’t worry — it’s possible to cure yourself of vampirism.

The main method involves a sidequest called Rising at Dawn, which can be completed as many times as you need, if you keep becoming a vampire and curing it repeatedly. To activate the quest, ask any bartender about rumors going around. They’ll give you the name Falion, who can be found in Morthal, in Hjaalmarch Hold.

Once you find Falion, he’ll tell you that he can perform a ritual to reverse vampirism, but you’ll need a filled black soul gem. After filling one, find him at the stone circle and let him cure your infection.

Additionally, you can cure vampirism by becoming a werewolf. Aela the Huntress turns you into one as part of the Companions questline. However, this is also a class that you’d have to cure if you don’t want it. So, if you don’t want to be a vampire or a werewolf, this method is not necessarily the one for you.

Dawnguard and Becoming a Vampire Lord 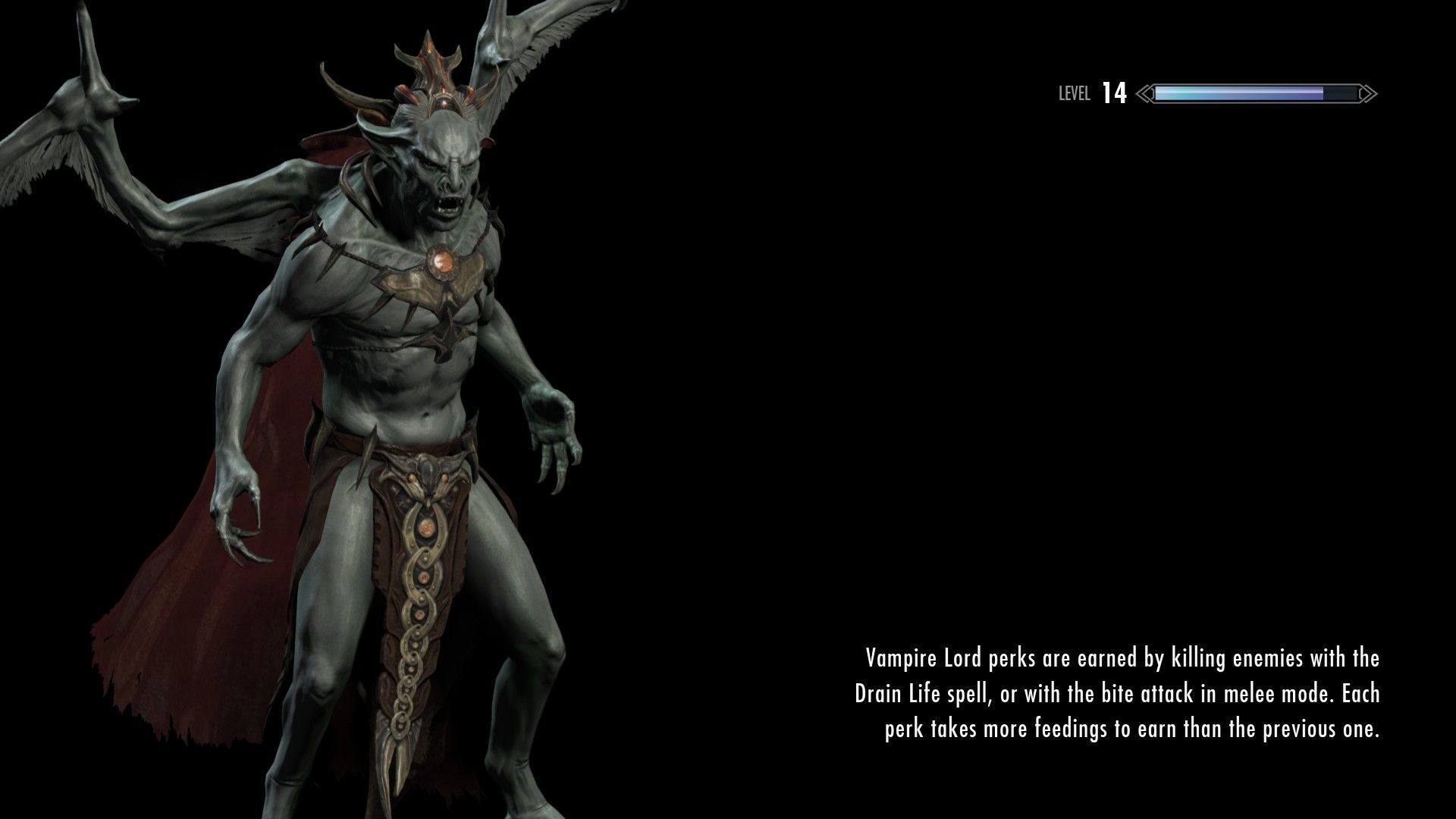 With the addition of the Dawnguard DLC, the vampire class has been expanded significantly. Those looking to become a vampire can now go as far as becoming a Vampire Lord, granting you some powerful new abilities and a brand new appearance.

Vampire Lord’s enjoy the benefits and detriments of regular vampires, including the four stages. However, they also have access to a unique skill tree with eleven perks. You’ll need to feed on people to unlock these perks.

Some of the more powerful perks include conjuring gargoyles, restoring health while attacking, detection abilities, and inflicting poison damage.

If you’re a Vampire Lord, you can still be cured in the traditional manner through the same methods, so never fear if you change your mind.

Next: Skyrim: 10 Things You Never Knew About The Vampire Lord