With over a decade since its launch and showing no signs of stopping, the story of Skyrim's hero continues to captivate players old and new. From their god(s)-given mission to vanquish Alduin to stopping Miraak's catastrophic plans, The Dragonborn's to-do list is never empty. But in the meantime, The Dragonborn can busy themselves with solving the worries of Skyrim's denizens.

One of these is helping the beleaguered and dying Nurelion of wintry Windhelm in his quest to attain The White Phial. We'll show you exactly how to get this phial of legend and put this matter to rest.

How To Start The Quest 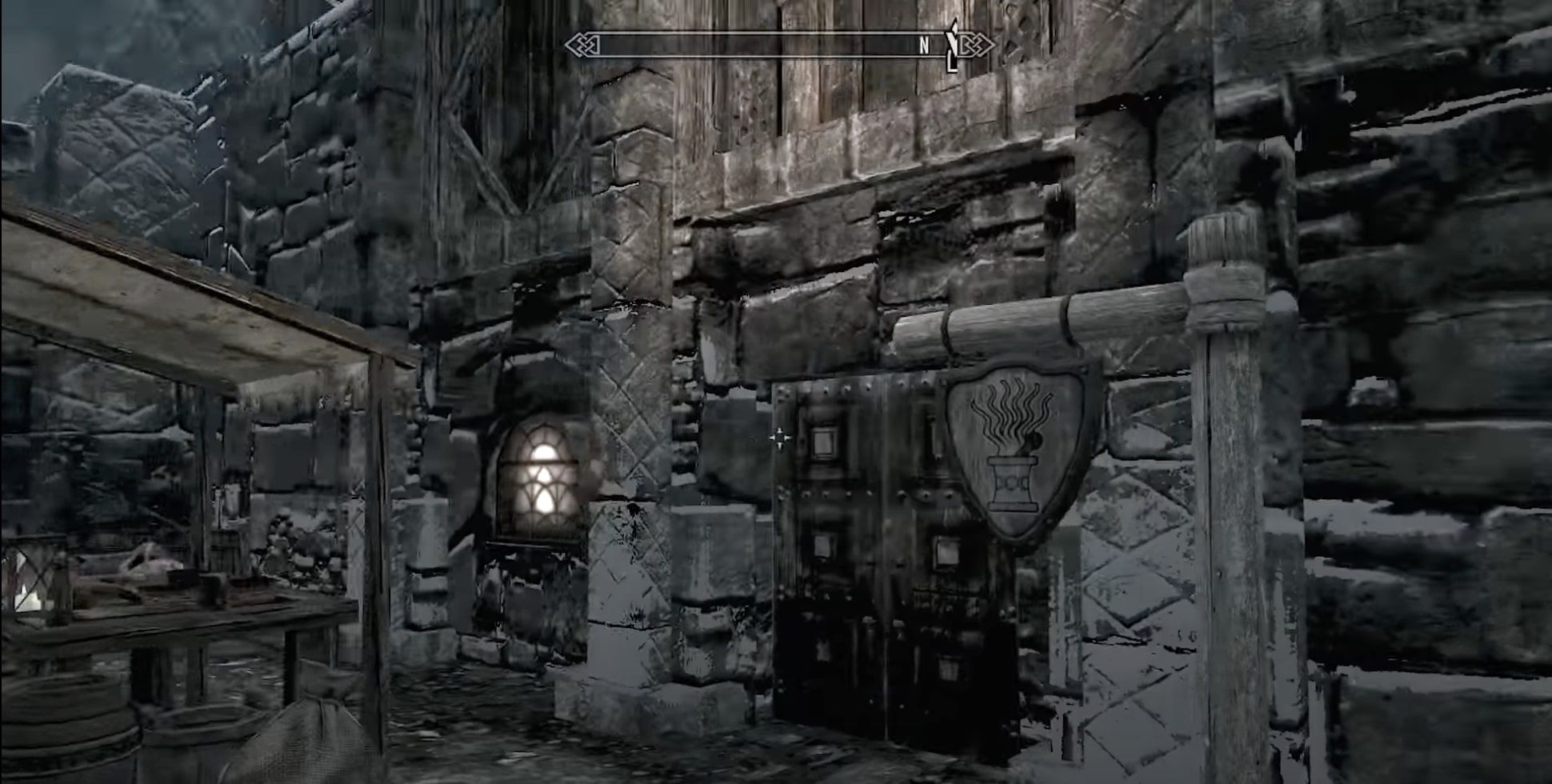 The White Phial quest starts off first in Windhelm, an alchemy shop owned by an old Altmer named Nurelion. Talk to him and he will tell you about the legend of The White Phial and his dreams of getting it. 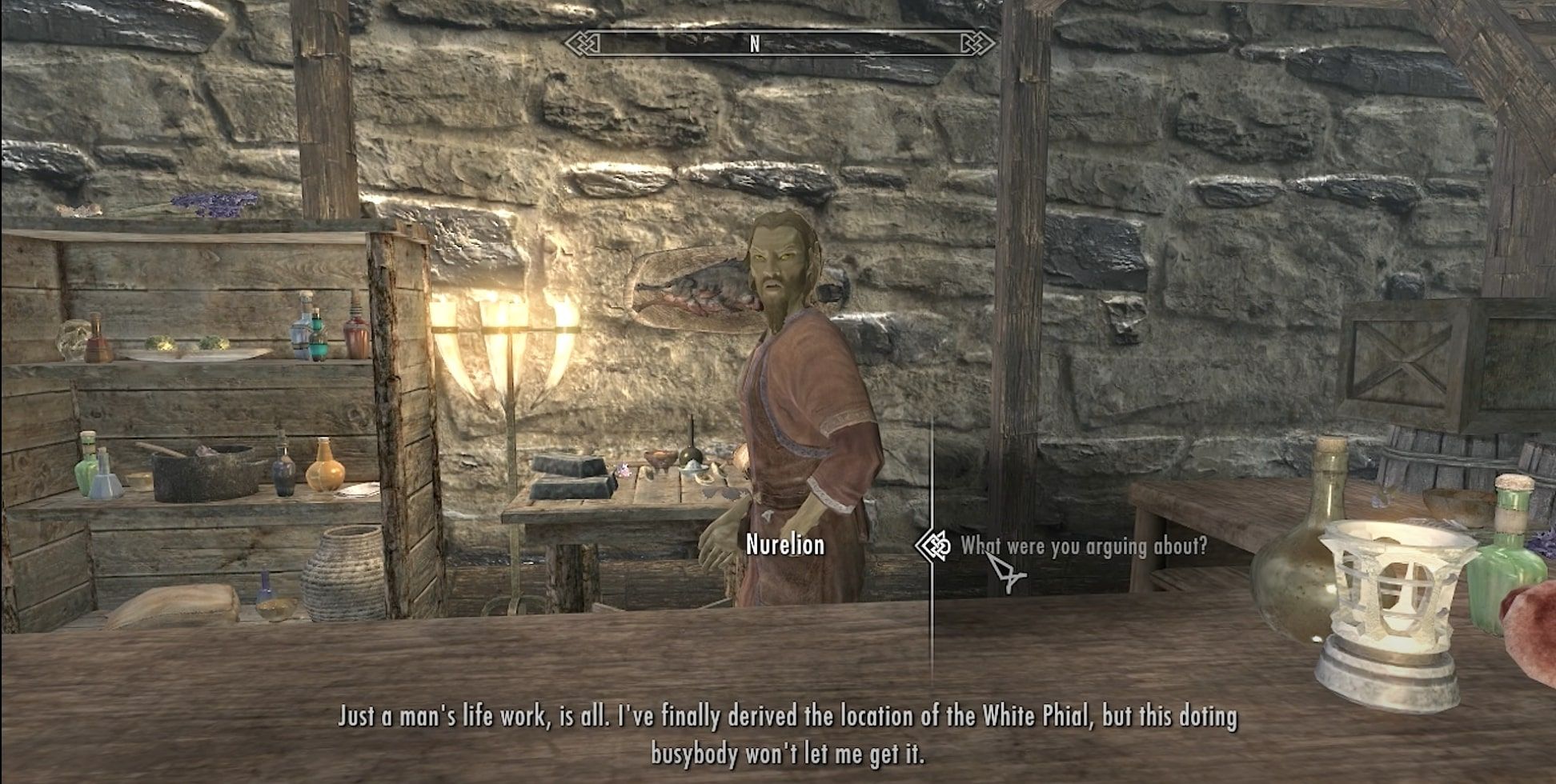 Simply go through the dialogue. The Dragonborn will volunteer to fetch the Phial from Curalmil's final resting place at The Forsaken Cave. Nurelion will give you Nurelion's Mixture to help you get through the cave in order to reach The White Phial. 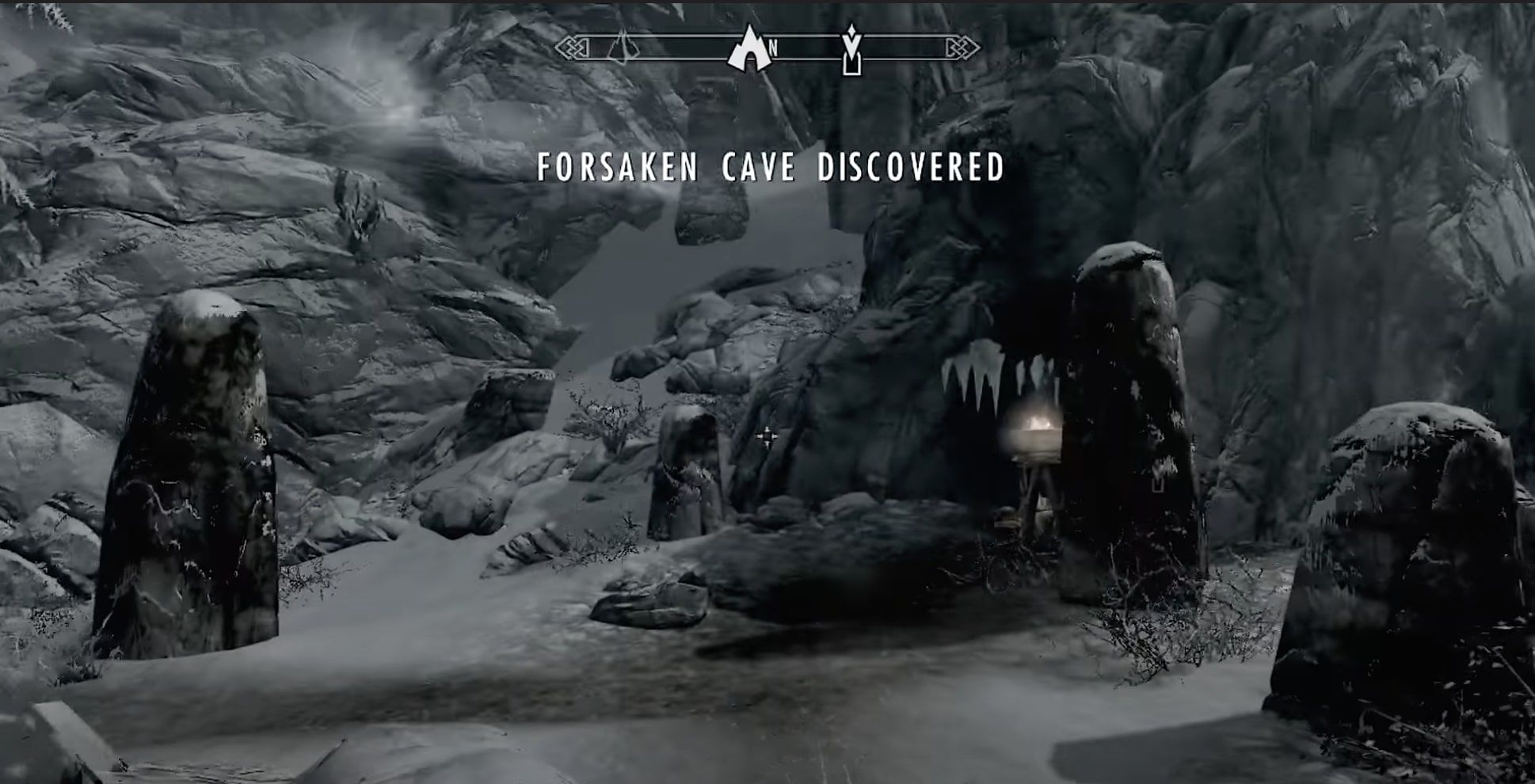 Go to the Forsaken Cave to the west of Windhelm, as indicated on the map. 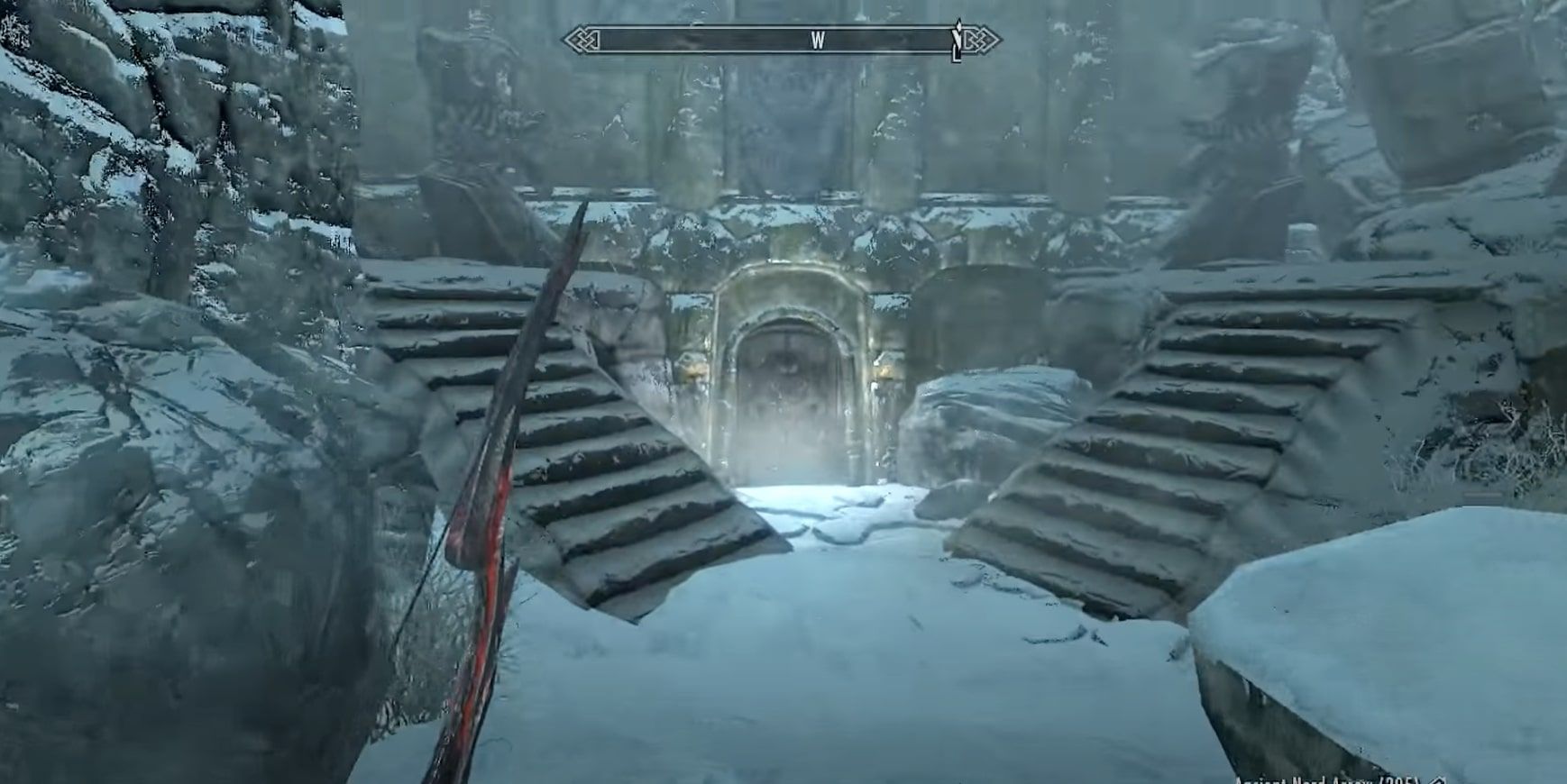 Upon entering, you'll be faced with two snow bears, before reaching the iron door. 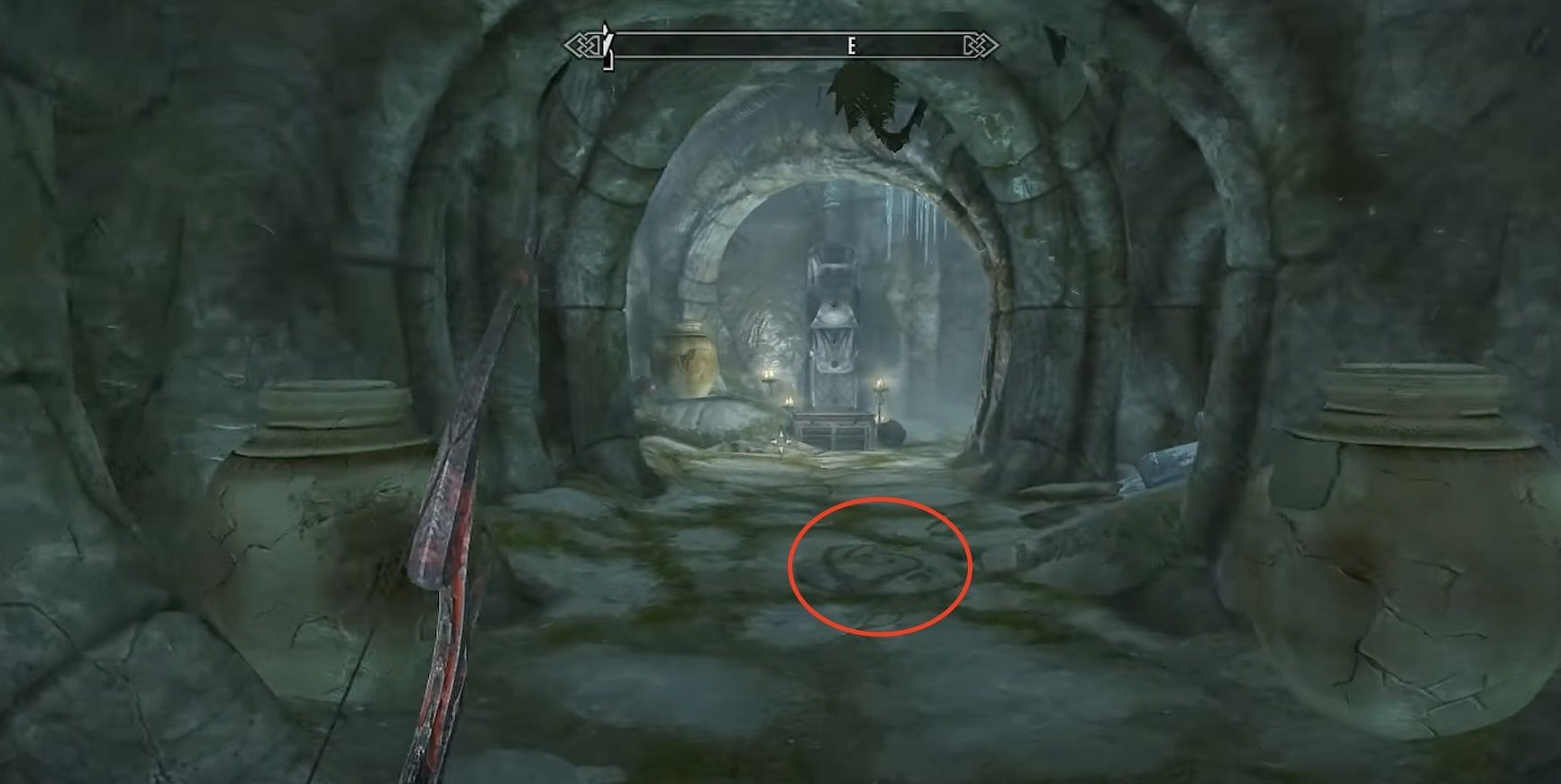 Descend the spiral staircase past the iron door, leading deeper into the cave. Follow down the tunnel and into the main corridor. Avoid stepping on the switch on the floor, which will activate the trap ahead, and it'll shoot bolts at you. 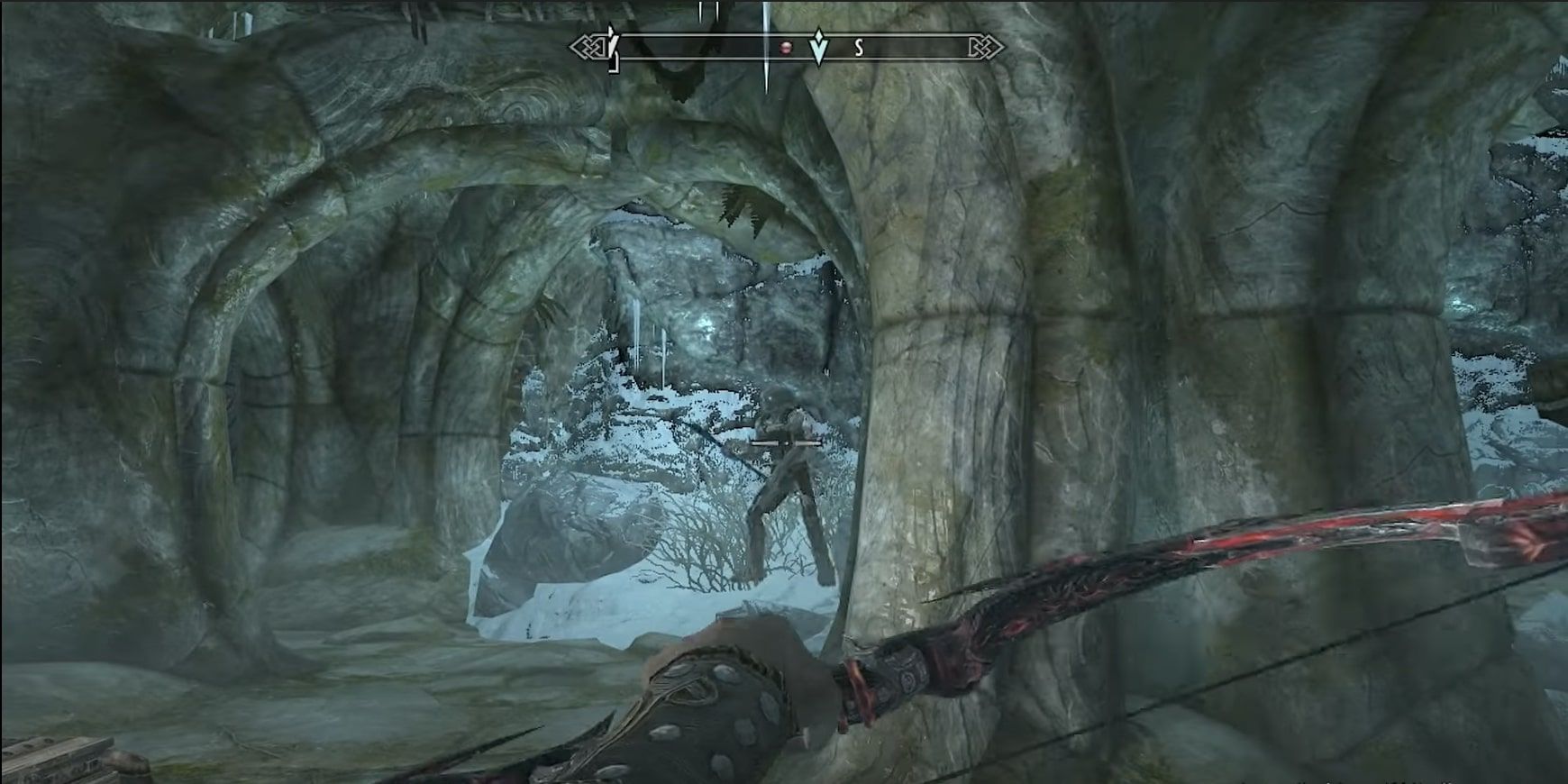 Turning right, you'll be faced with draugrs. Keep heading straight down toward the door at the end and turn right once more. Continue down the tunnel and keep an eye out for more draugrs. 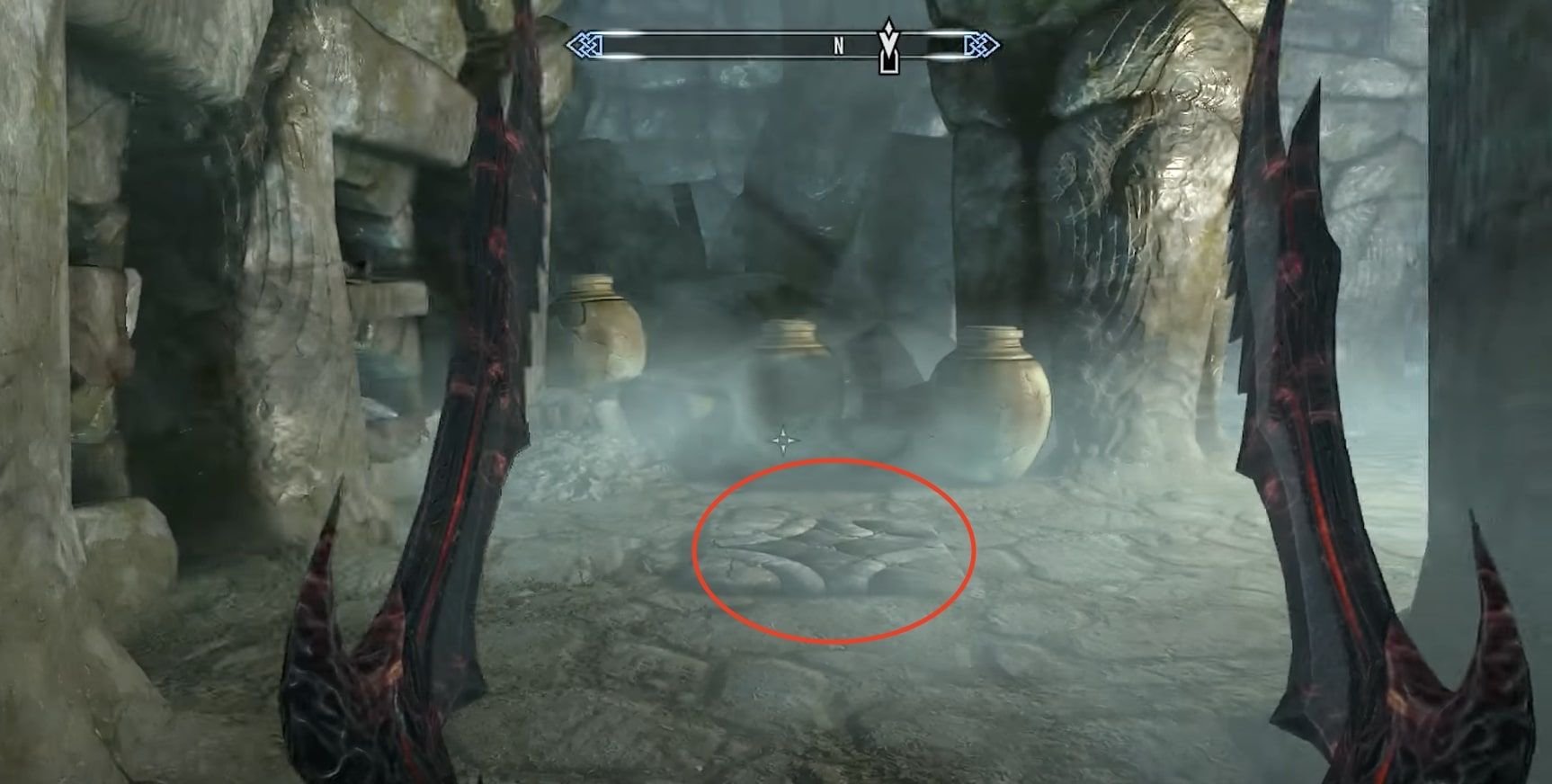 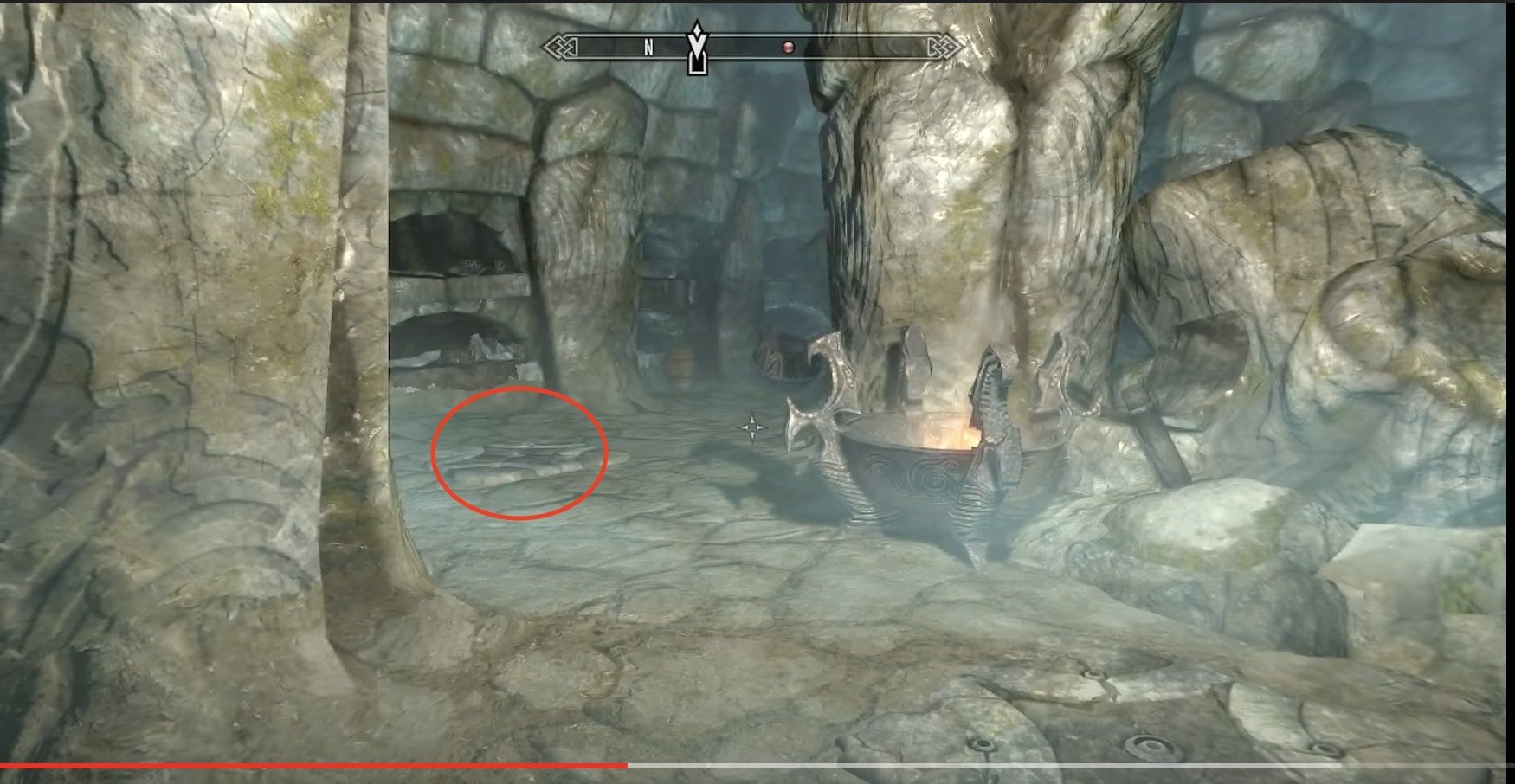 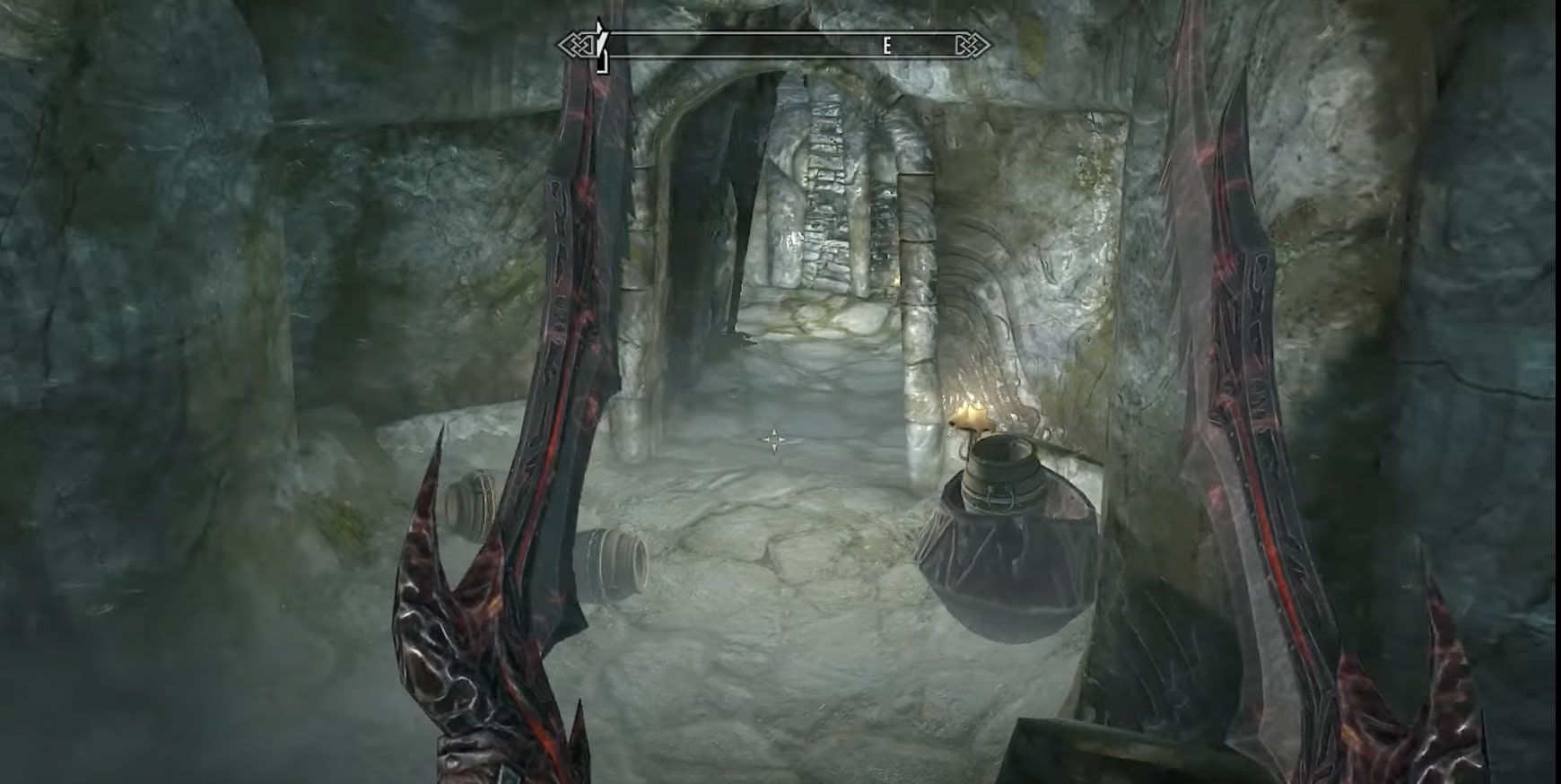 The tunnel opens up into a grand hall, but watch where you step. There are three square platforms along the floor that triggers a firetrap. Simply manoeuvre around them and get around the rubble to the entryway at the opposite end. 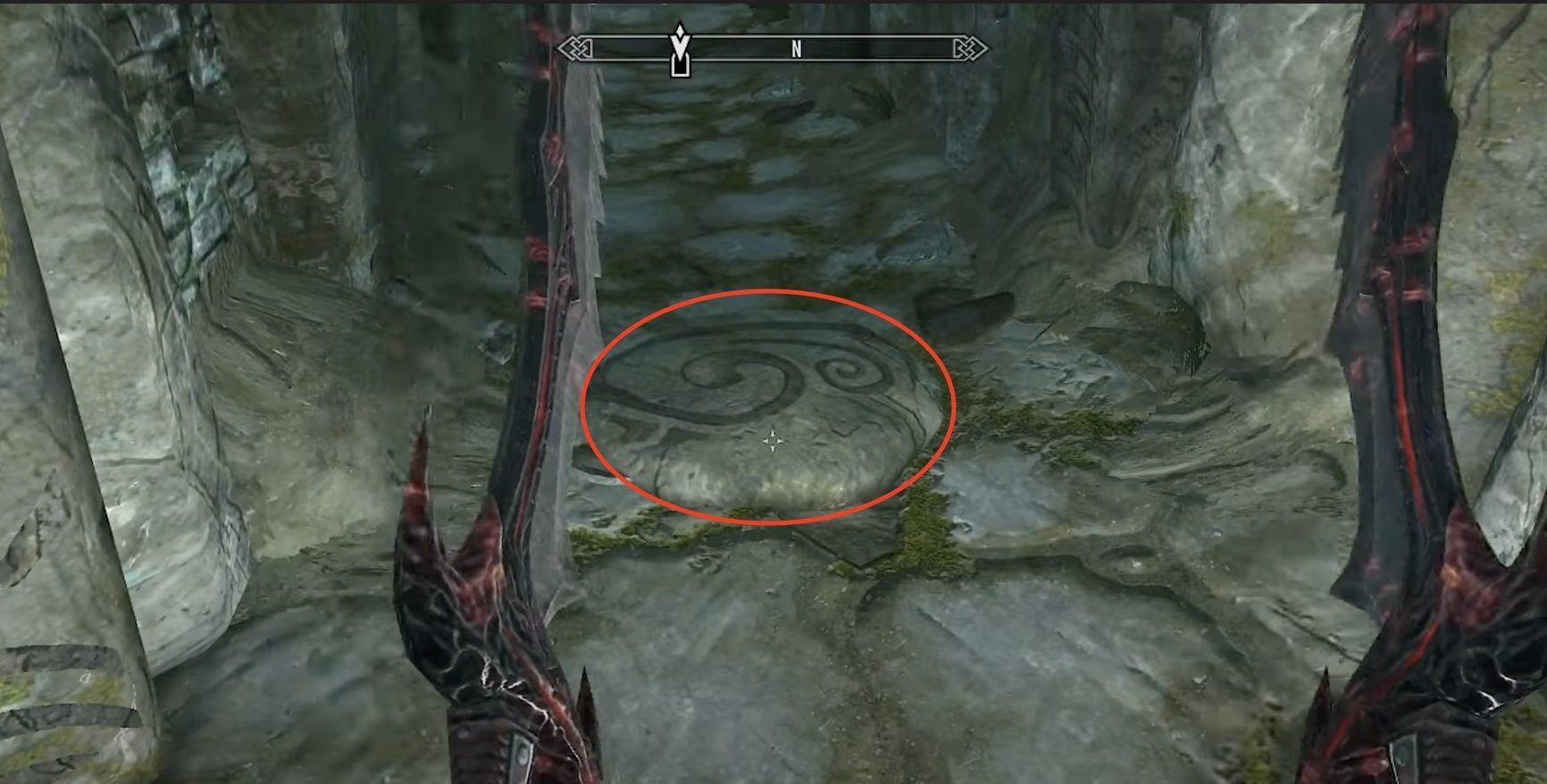 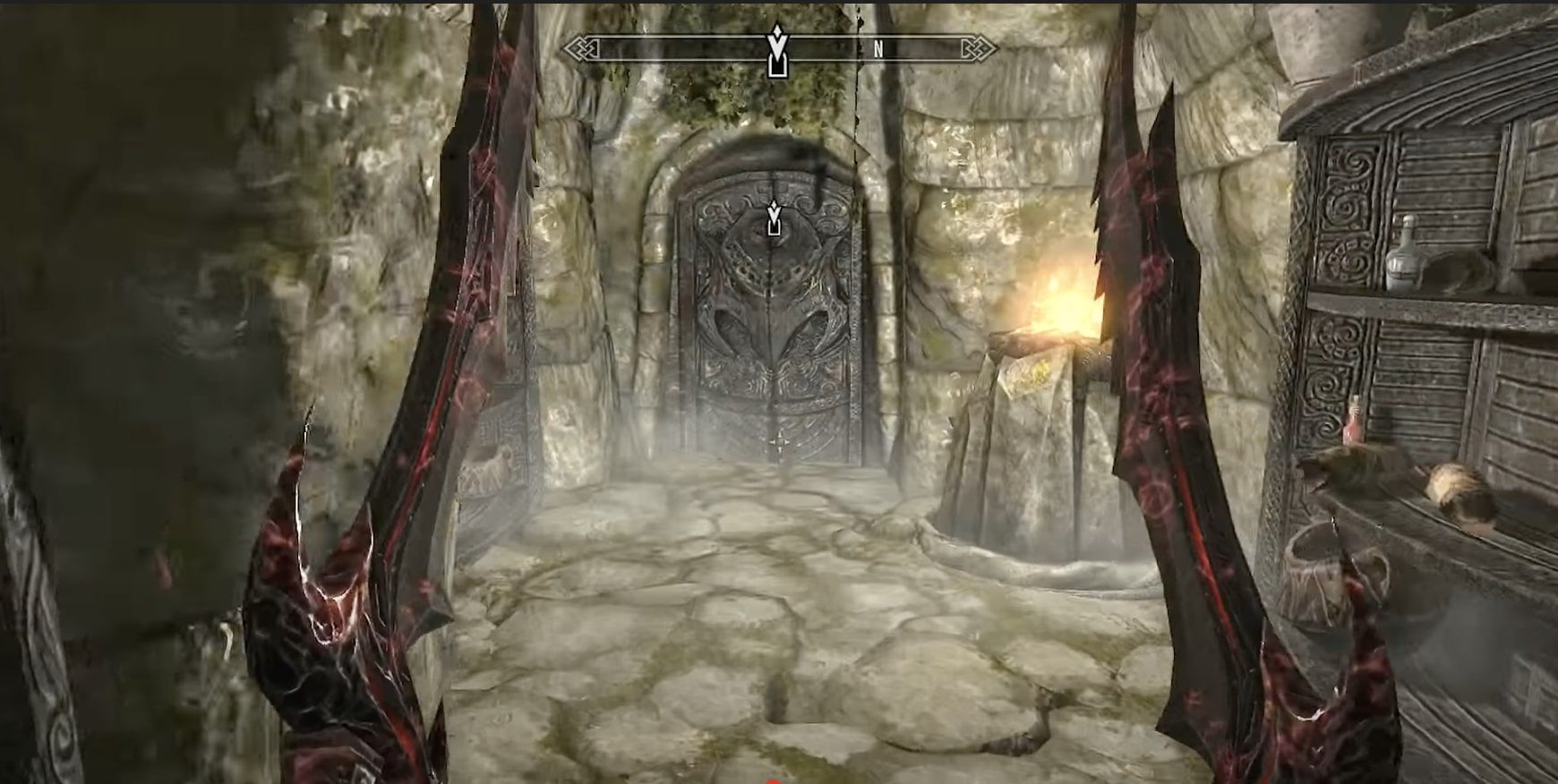 Avoid another switch button on the floor along the narrow corridor before reaching the door to the Forsaken Crypt.

Go down the short corridor and into a vast, open room. Deal with the draugr there and go into the next archway. Follow the path down the corridor, which leads you to the upper floor of the crypt. Beware the draugrs along the way. 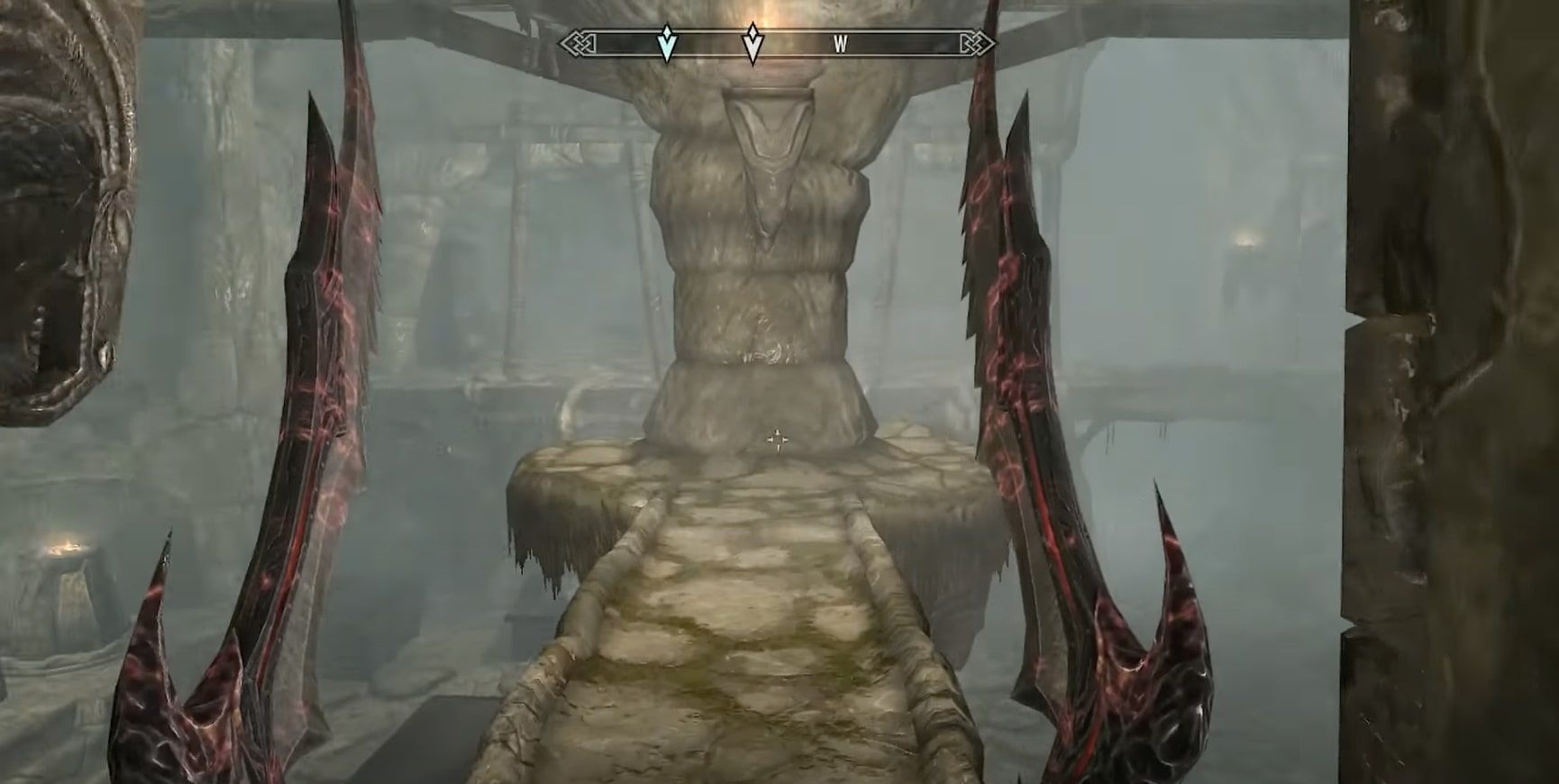 Once you get to the upper floor of the crypt, cross over the bridge to the other side. Kill off the draugr there, and cross a wooden bridge to your right. This leads to another room.

There'll be two draugrs waiting for you. Simply lead them to the circular platform and this will activate the trap as you see in the picture above. Then go through the iron door to your left and go past the enclosed bridge. 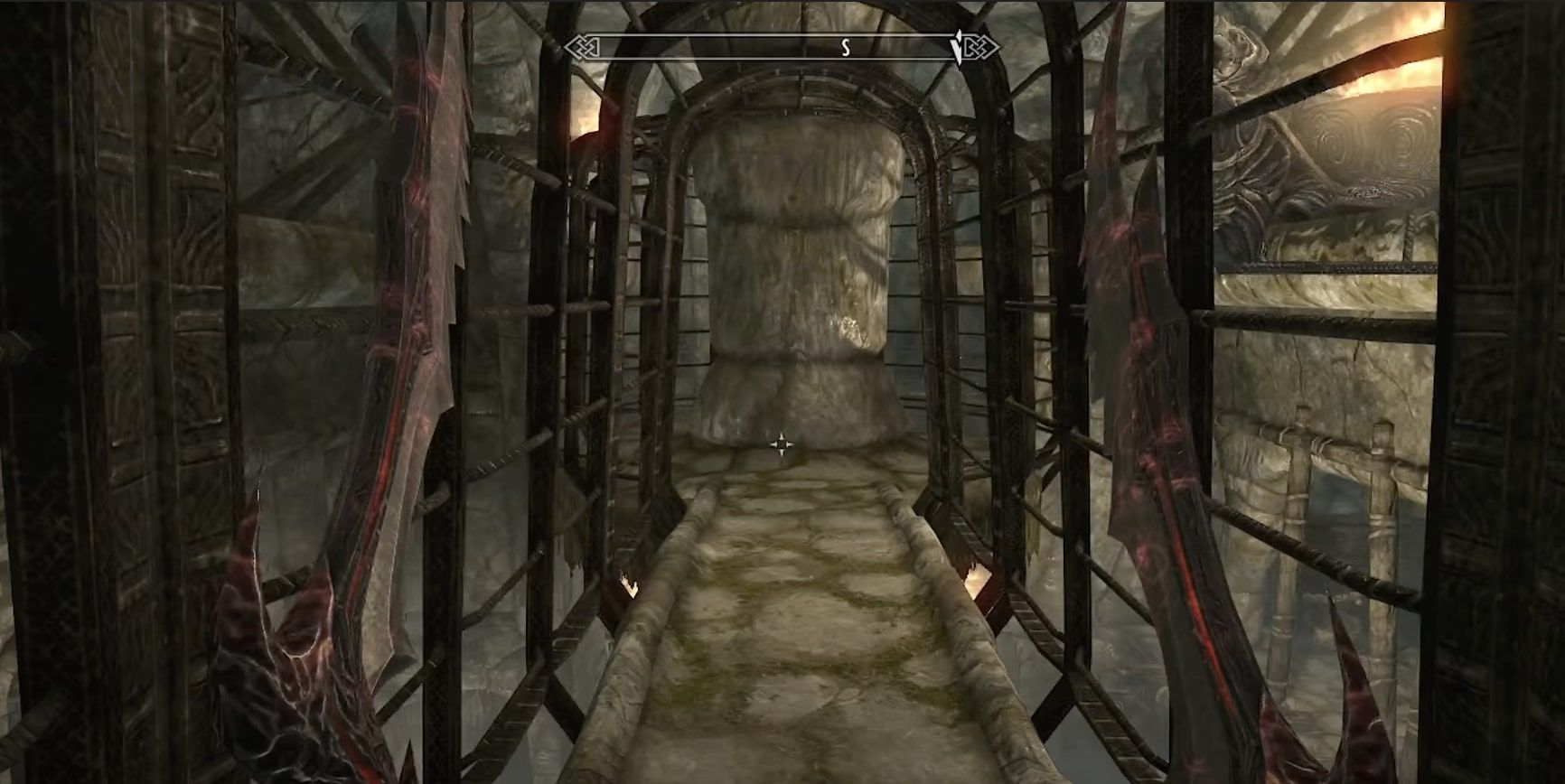 Go down the corridor and defeat the draugrs along the way. You'll find another set of iron doors at the end. Open the doors, and you'll find a set of swinging-blades trap. 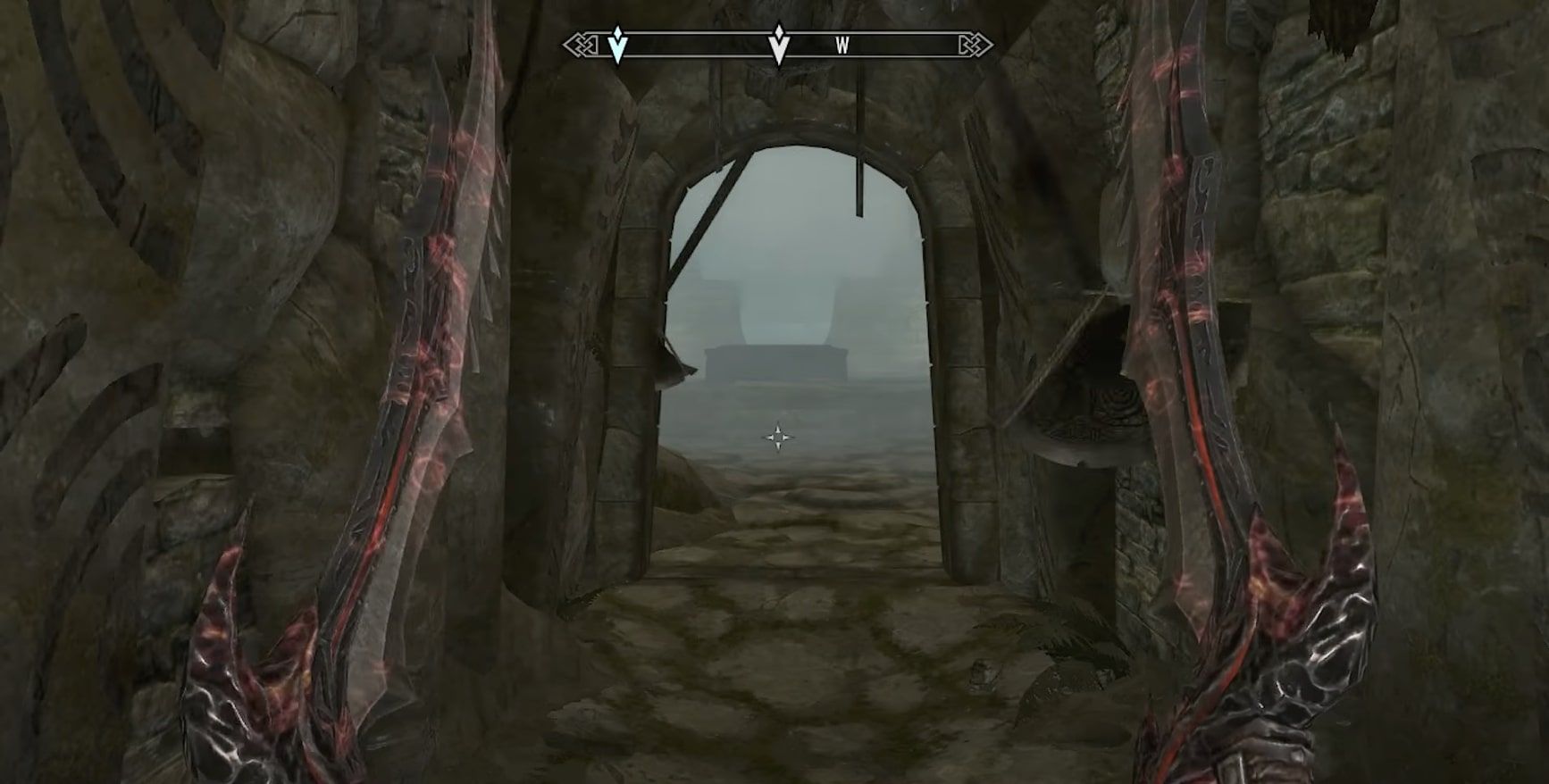 Wait for the first blade to swing by before slipping past. Do the same for the second blade. Walk further and you'll gain access to Curalmil's tomb.

Curalmil wields a sword and shield. He has the ability to unleash the Frost Breath Shout; as such is recommended to use weapons that deal fire damage. From using the Fire Breath Shout and Dawnbreaker to enchanting your weapons to deal fire damage, Curalmil is otherwise not too outstanding in terms of Skyrim bosses you encounter. But keep an eye out for the three average draugrs that's buried alongside him.

To be safe, bring along a follower with you (i.e. Aela the Huntress, Serana).

Don't forget to snag the Dragon Shout on the Word Wall above Curalmil's coffin.

How To Get The White Phial

After the boss fight, go down the corridor beneath the Word Wall. 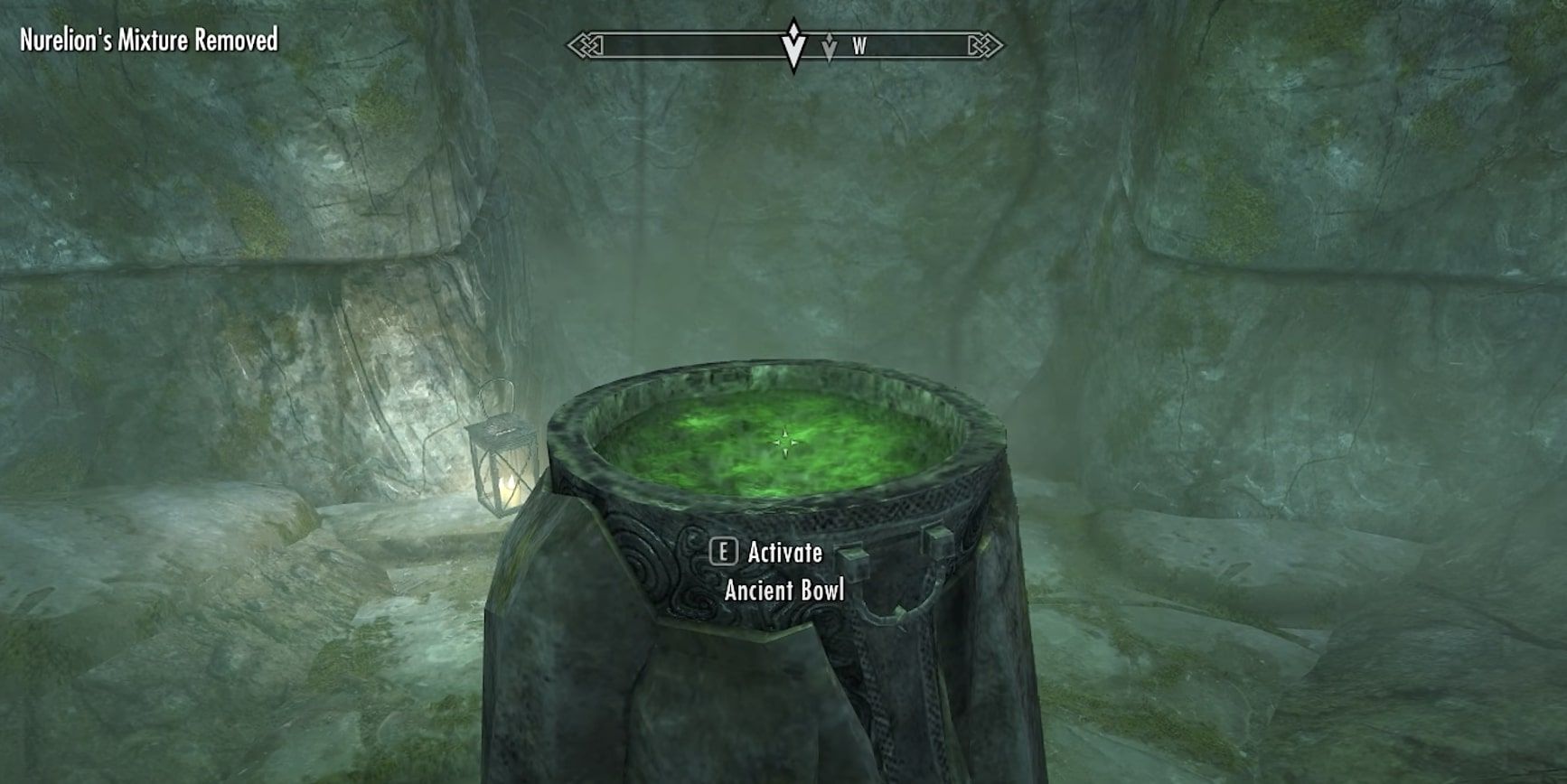 At the end of the corridor is an ancient bowl. Pour Nurelion's Mixture into the bowl and a false wall will slowly descend to reveal a secret room. Enter the secret room, and you'll find the White Phial perched on a pedestal. 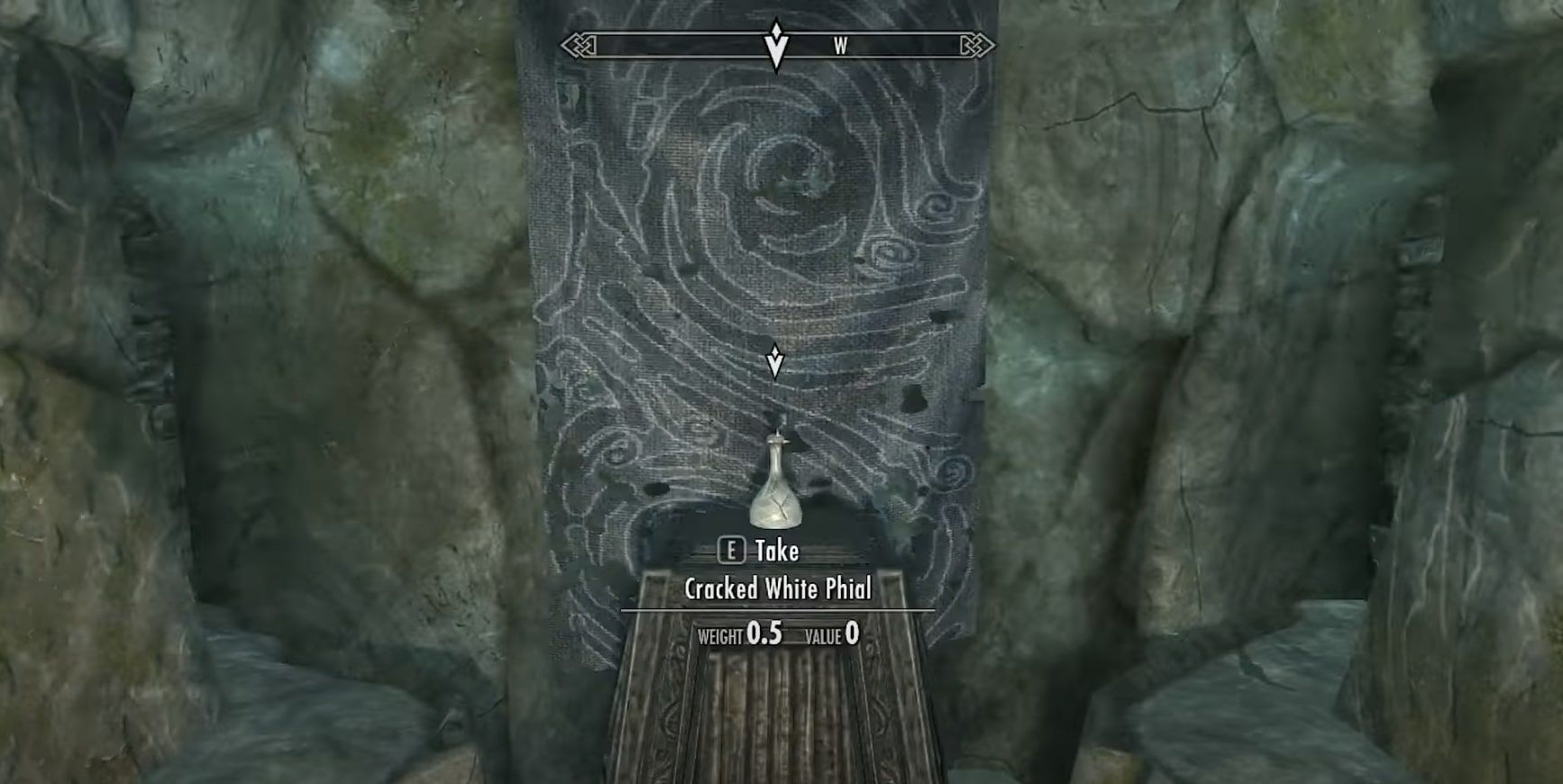 Take the White Phial and go back down the corridor. Emerging back to Curalmil's tomb, turn right, and you'll find an iron door. 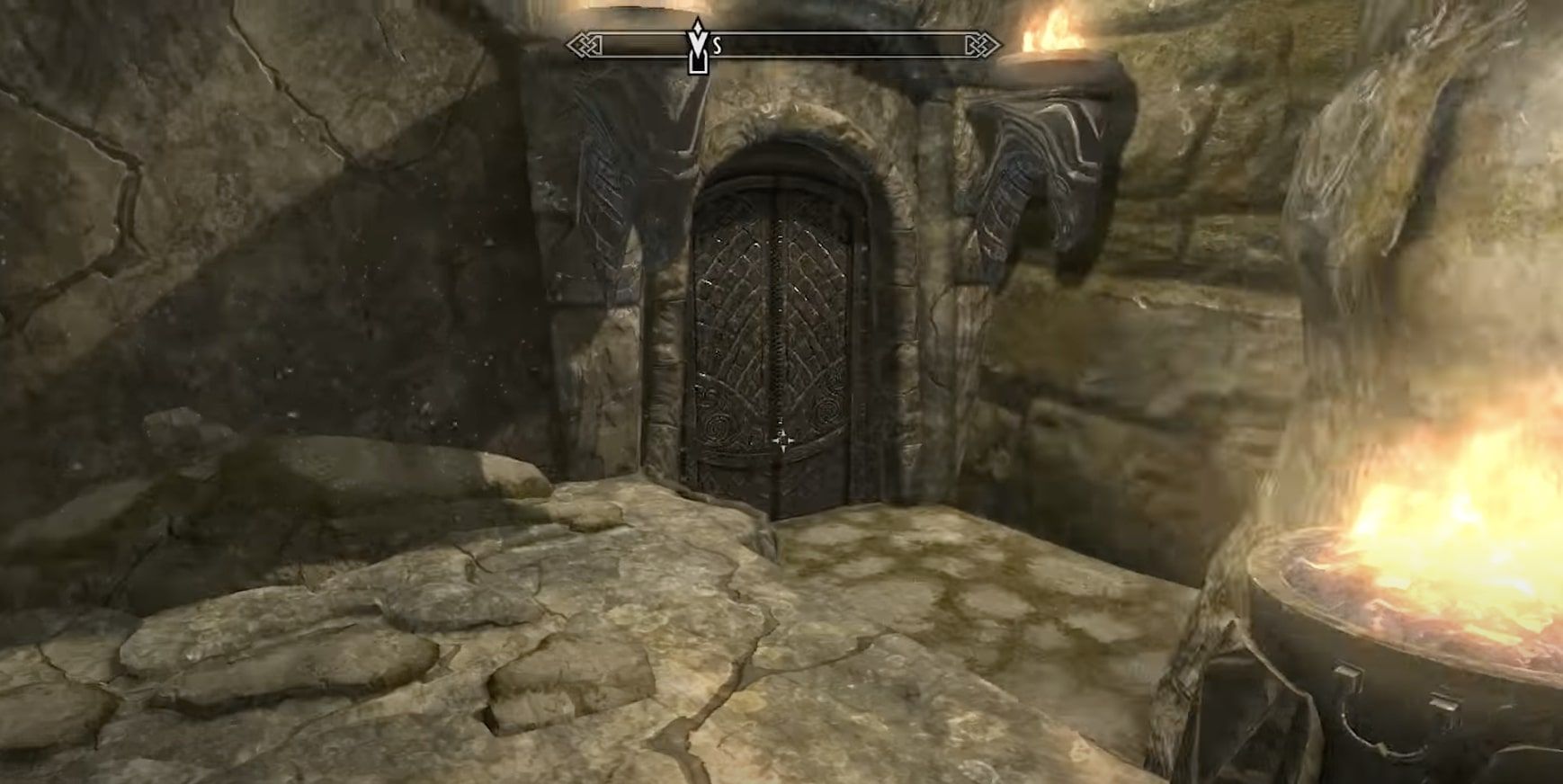 Leave through the door and activate a lever that'll return you to the entrance of the cave.

Give The White Phial To Nurelion 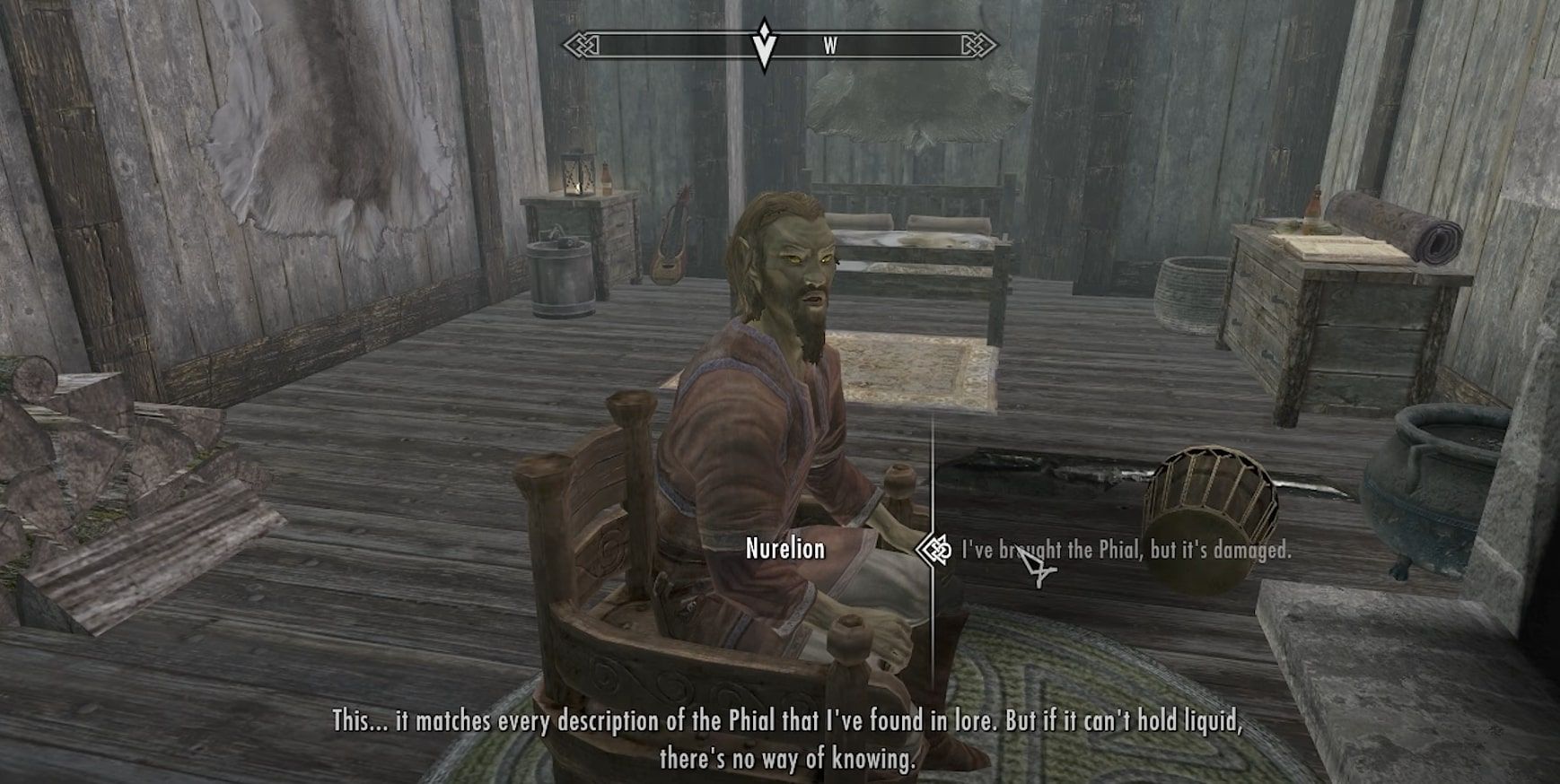 Return to The White Phial at Windhelm. Once you give Nurelion the phial, he will be displeased at its damaged state. He will only give you 5 septims for your trouble.

Although this is optional, speak to Quintus Navale in order to obtain a greater reward. Quintus will say you deserve more than what Nurelion's given you. He will then hand you 500 septims, thus ending the quest.