Steelrising's third Titan, The Alchemist Of Luxembourg, can be a real problem. While every boss that came before him was vulnerable to the Shielded Musket, this is a boss who can genuinely thrive when fighting from a distance. Moreover, he has a whole host of attacks that are not only rangy, but also deal alchemical damage. Needless to say, this Alchemist can be a bit of a handful!

Related: Steelrising: The Tuileries Part 1, Quartier Du Louvre WalkthroughThankfully, while The Alchemist Of Luxembourg has extremely potent attacks, these attacks also have some pretty notable tells, and they tend to be accompanied by some long recovery times. We'll tell you what to look for when fighting this Alchemist, and more importantly, when to strike!

The Alchemist Of Luxembourg's Attacks 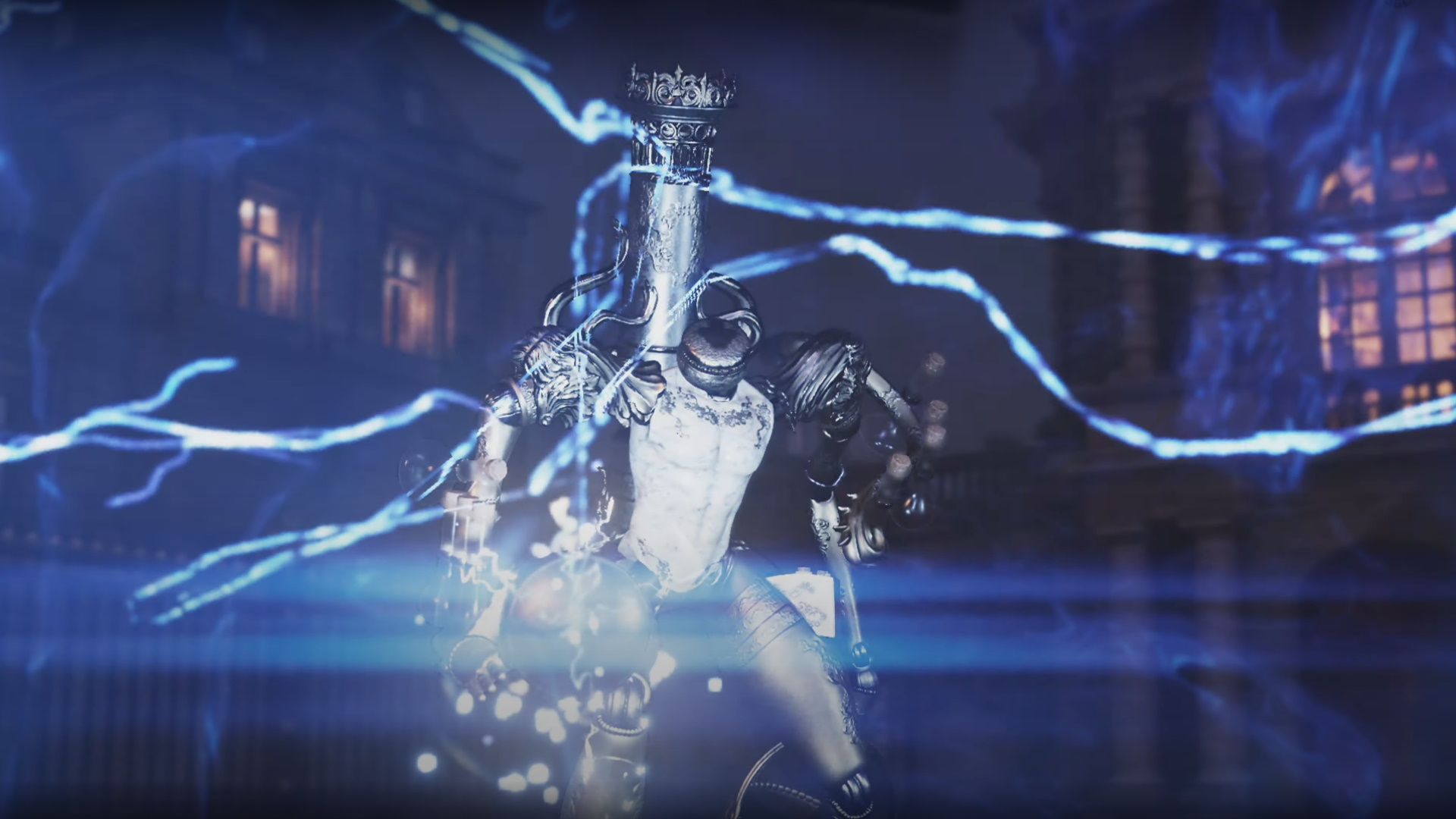 The Alchemist Of Luxembourg is dangerous at any range. Not only is their projectile better than any other enemy's that you have fought up to this point, but the Alchemist also has one of the fastest dashing attacks in the game. On top of all of that, they have attacks that have a ginormous range. Oh, and they can deal elemental damage of every type. There is a lot here that you need to deal with. So, let us detail every attack so that you know exactly how to circumvent the Alchemist's potent toolset. 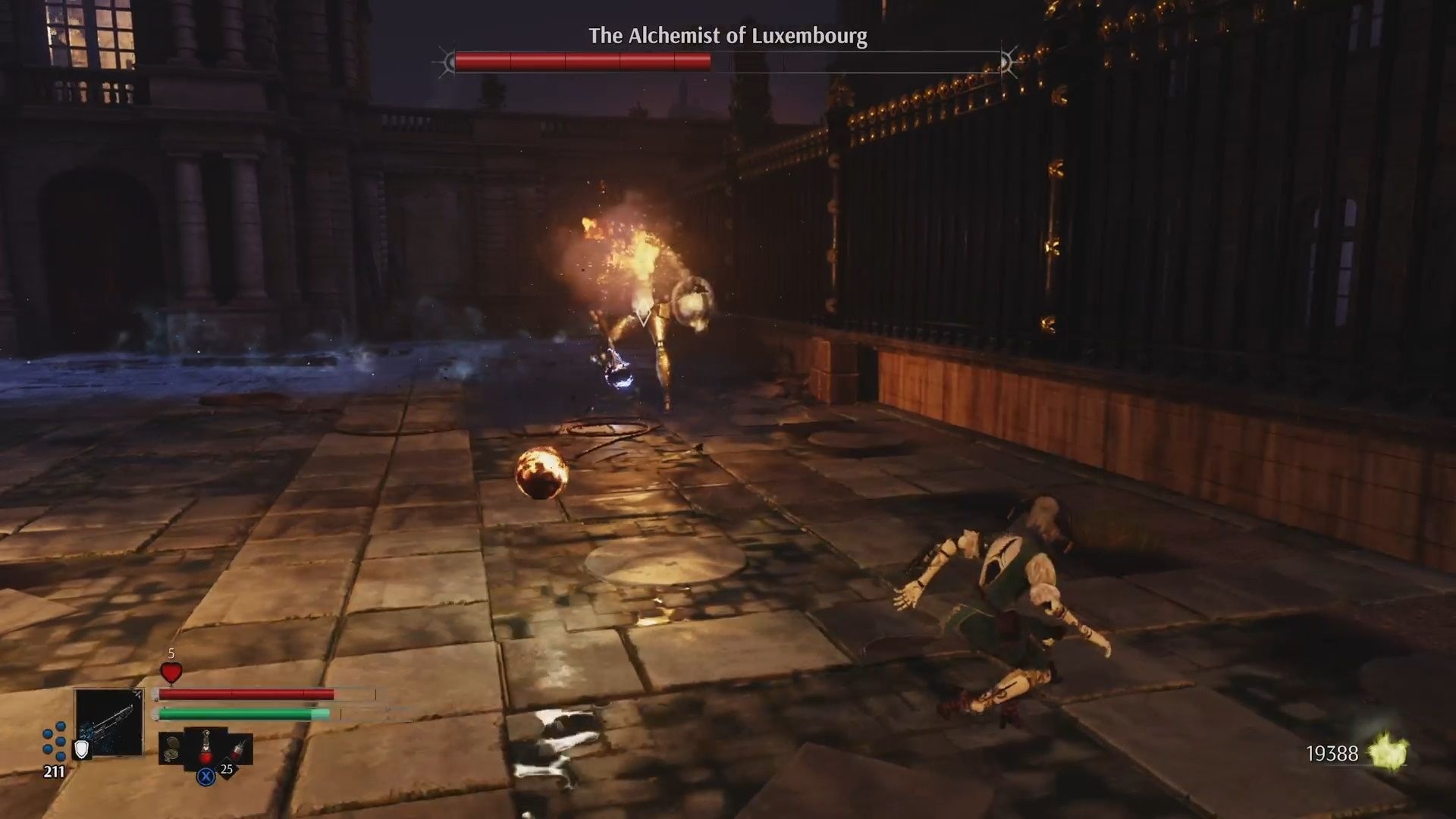 Remember how we said that the Alchemist has one of the best projectiles in the game? Yeah, this isn't that projectile. The Alchemist's Cannon Fire will see him slowly load the giant torch-like cannon on his back before firing it in your direction. Not only is this heavily telegraphed, but the projectile itself is extremely slow. A lazy dodge to the side will be enough to get past this attack. If you do get hit by this attack, you will take fire damage. 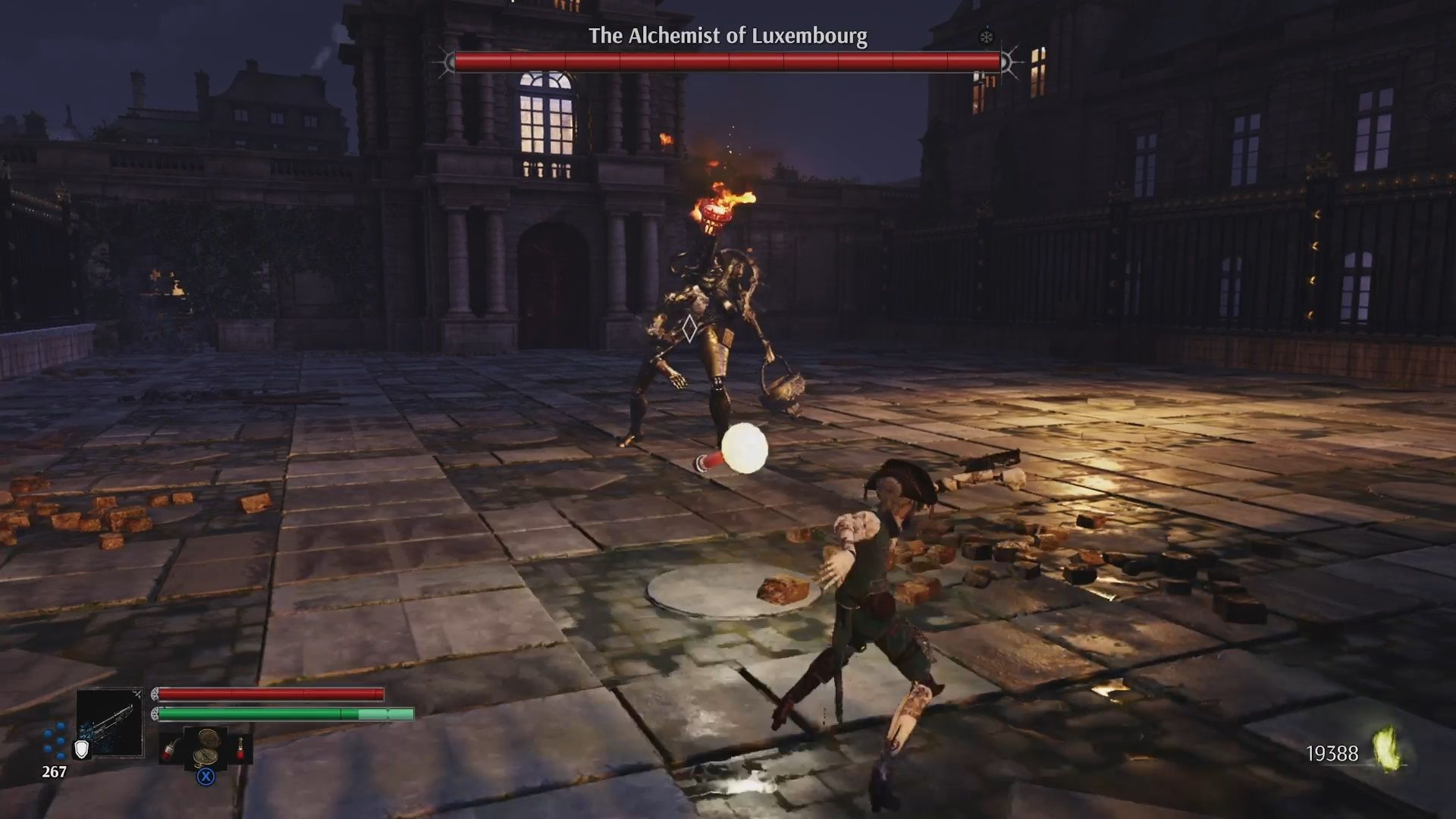 This is the Alchemist Of Luxembourg's second projectile attack, and it is going to be your biggest threat when at a distance. Not only is the grenade surprisingly hard to dodge, but it does a ton of damage. Also, depending on what your Alchemical resistance is like, you may actually be set on fire by a single grenade. 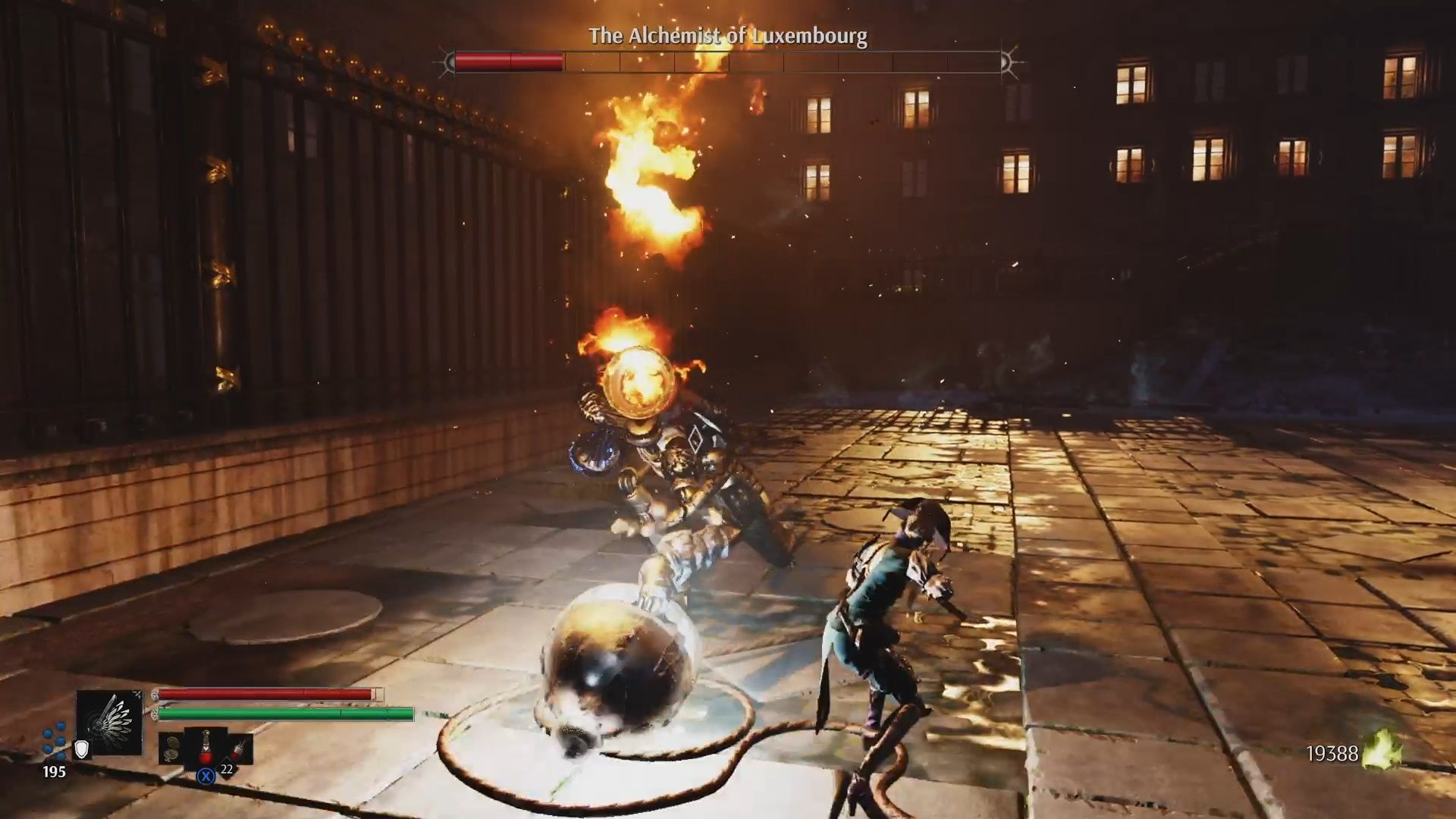 Here the Alchemist will swing that giant pot they are holding at your head. This is one of their go-to moves when up close. They will swing horizontally twice and then end with a big vertical swing. There isn't really anything special about this attack. It isn't particularly rangy, so you can back dash to get out of range from the first two swipes, and then dash past them when they are finishing with the big vertical swing. If you dash past the third strike, you will have a chance to land a charges attack.

Holy moly is this attack fast! If you see The Alchemist Of Luxembourg take an awkward backward step, that means they are about to perform their Dash Attack. Thankfully, this move doesn't appear to have much, if any, tracking. So, if you are moving to the side frequently, the alchemist will likely sail past you. However, if you are using a ranged weapon, and you are stuck in an attack animation when it does this attack, you are going to get smoked. 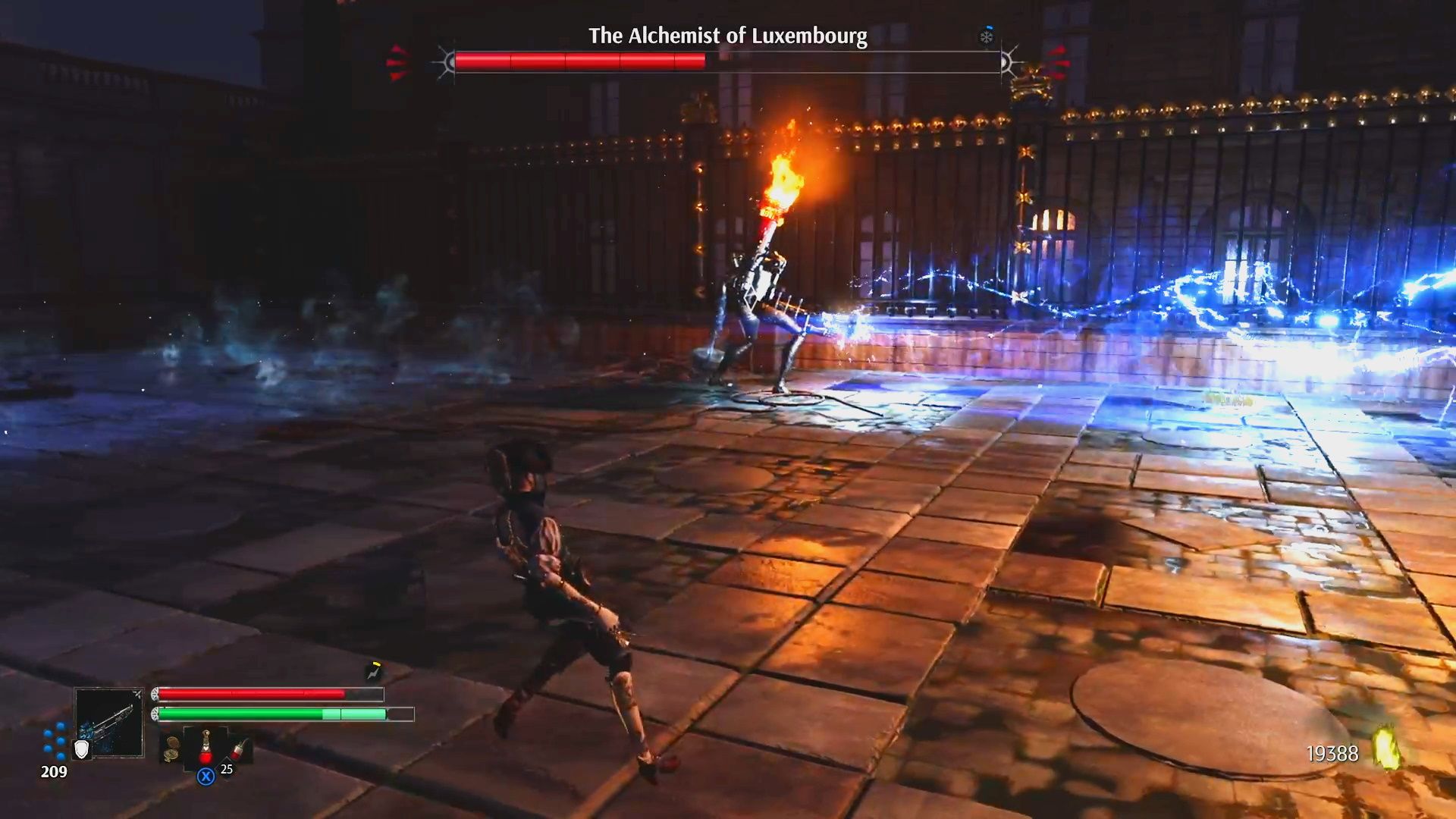 For this attack, The Alchemist Of Luxembourg will raise their mace into the air, absorb a lightning bolt, and then aim the mace at you and fire a wave of lightning in your direction. While this move has incredible range, the tell does make it easy to avoid. Better yet, it locks the Alchemist into a pretty lengthy animation. So, you are going to want to start strafing the second you see them raise that mace, and then, once they are locked into their attack, fully charge an attack and lay into him. 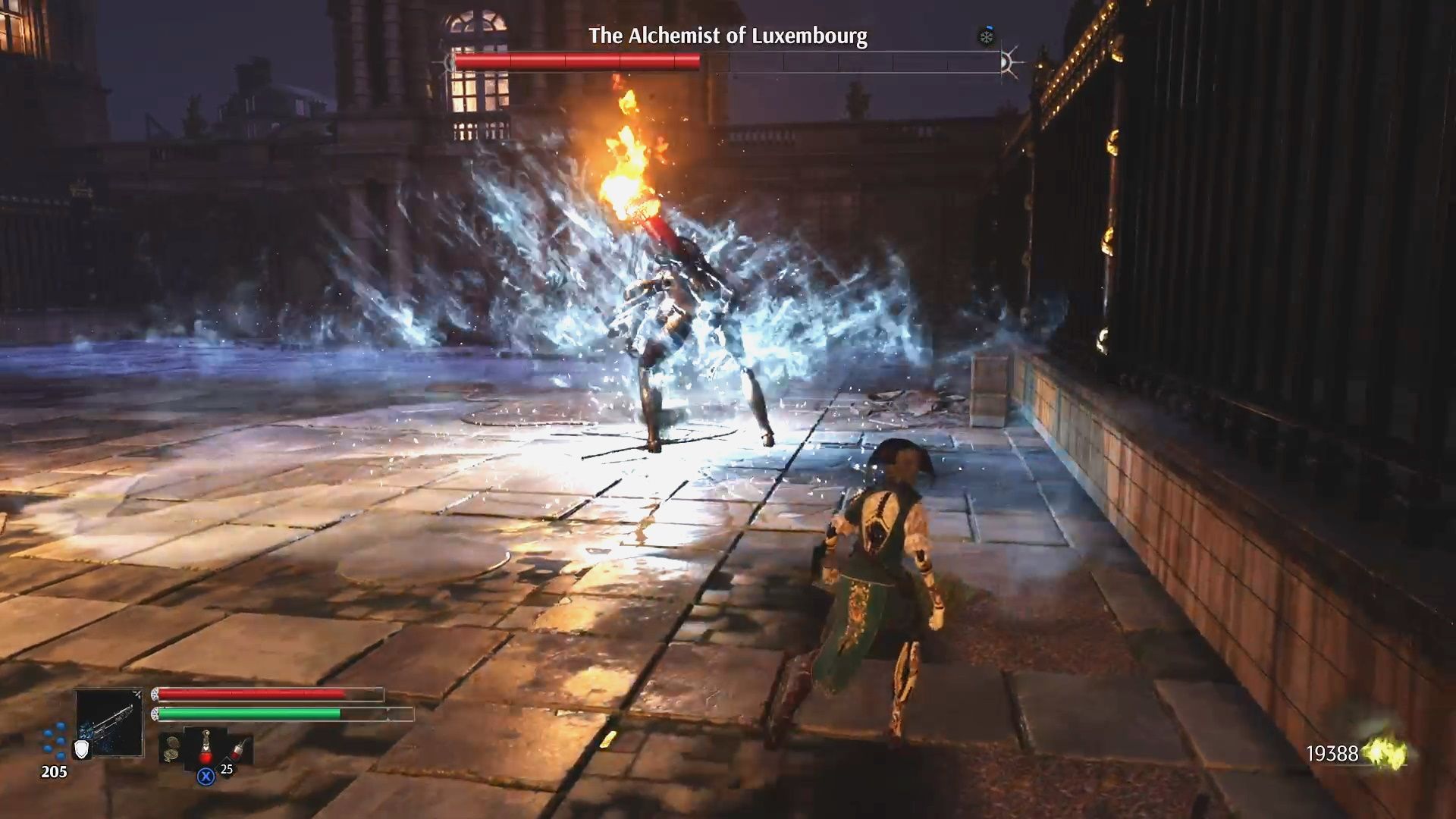 If you see the Alchemist place their pot onto the ground, and pour something into it, they are performing this attack. It will create an icy explosion that will hit all around them. So, once they start fiddling with that pot, back dash away from them to avoid it. 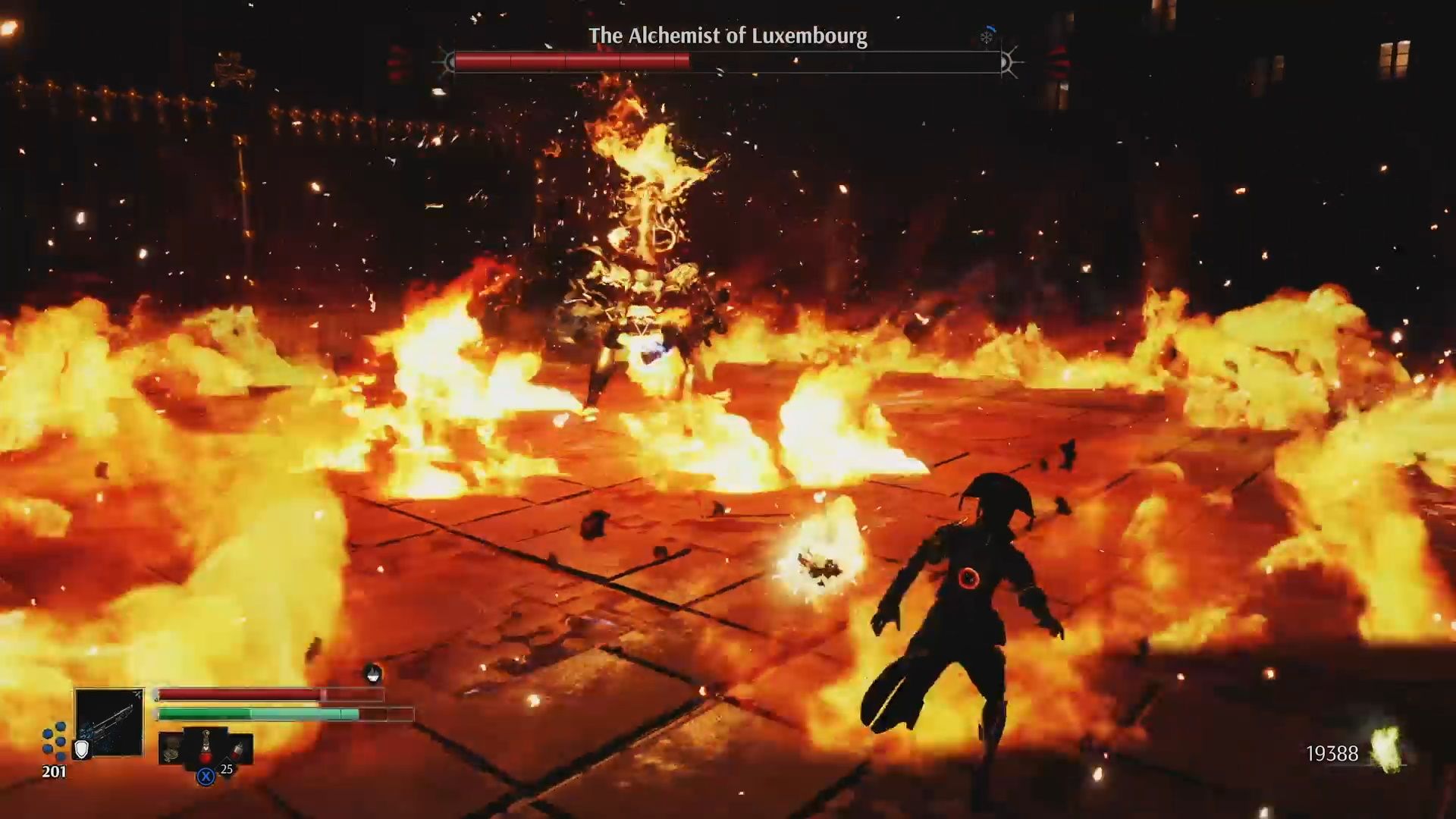 When the ground starts to grow red, and the Alchemist slowly lifts their leg, the ground is about to erupt in flames. The range of this attack is massive, and it hits all around the Alchemist. You need to react pretty quickly in order to get far enough away. Thankfully, it does a very small amount of damage. So, while you are likely to get hit by this one, it really isn't a big deal. 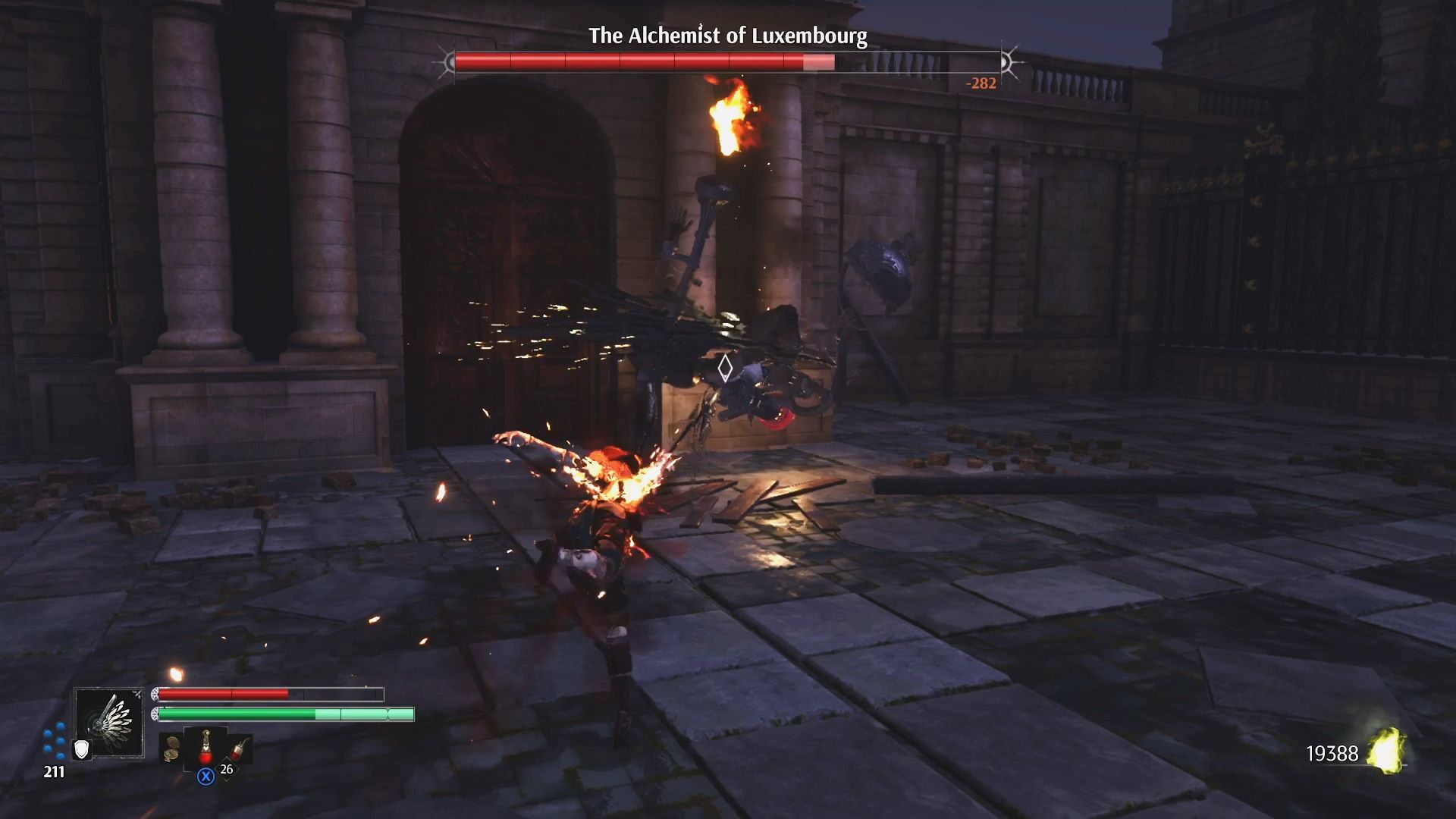 When it comes to weapons, having a heavier hitting weapon, that has a potent charge attack, will serve you quite well. The Alchemist can be knocked around, and some of their attacks leave them open to huge hits. However, faster weapons—like the claws—also have some serious advantages, since they don't force you to commit to attacks as heavily, which will allow you to evade the Alchemist's dash attack and grenades. 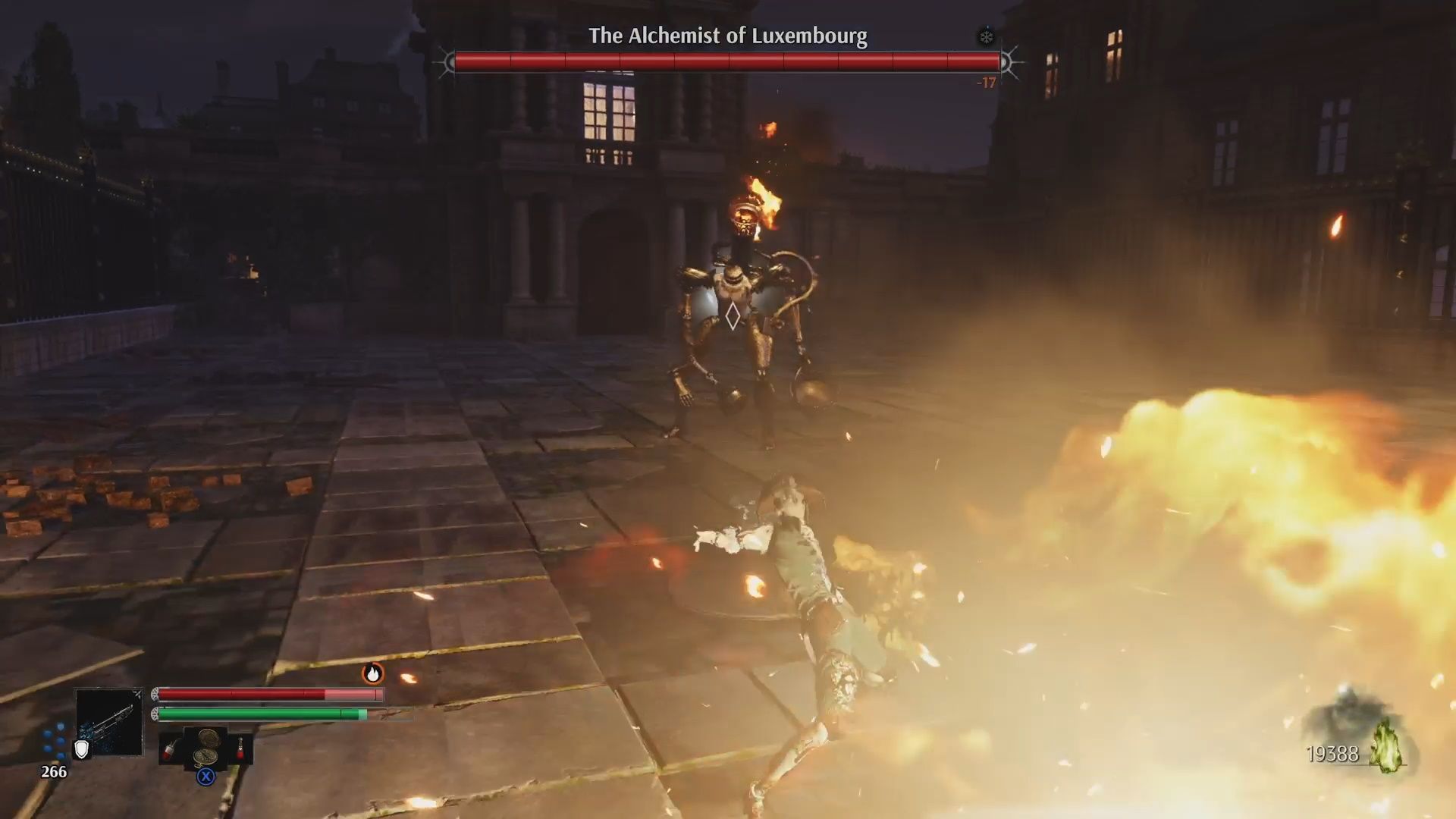 The weapon type to avoid would be the longer-range weapons. Your musket will absolutely get you tagged by grenades. Similarly, a weapon like the Fire Chain will force you to commit to attacks in the mid-range, which will leave you vulnerable to a number of the Alchemist's moves.

One other thing you may want to consider bringing into this fight would be elemental resistance vials. While the Alchemist can hit you with attacks of every element type, their biggest threat is those grenades, which cause burning. So, if you have any vials that will grant you fire resistance sitting around in your inventory, it may be worth throwing them on your belt.

The Selenite Of The Louvre Battle Strategy 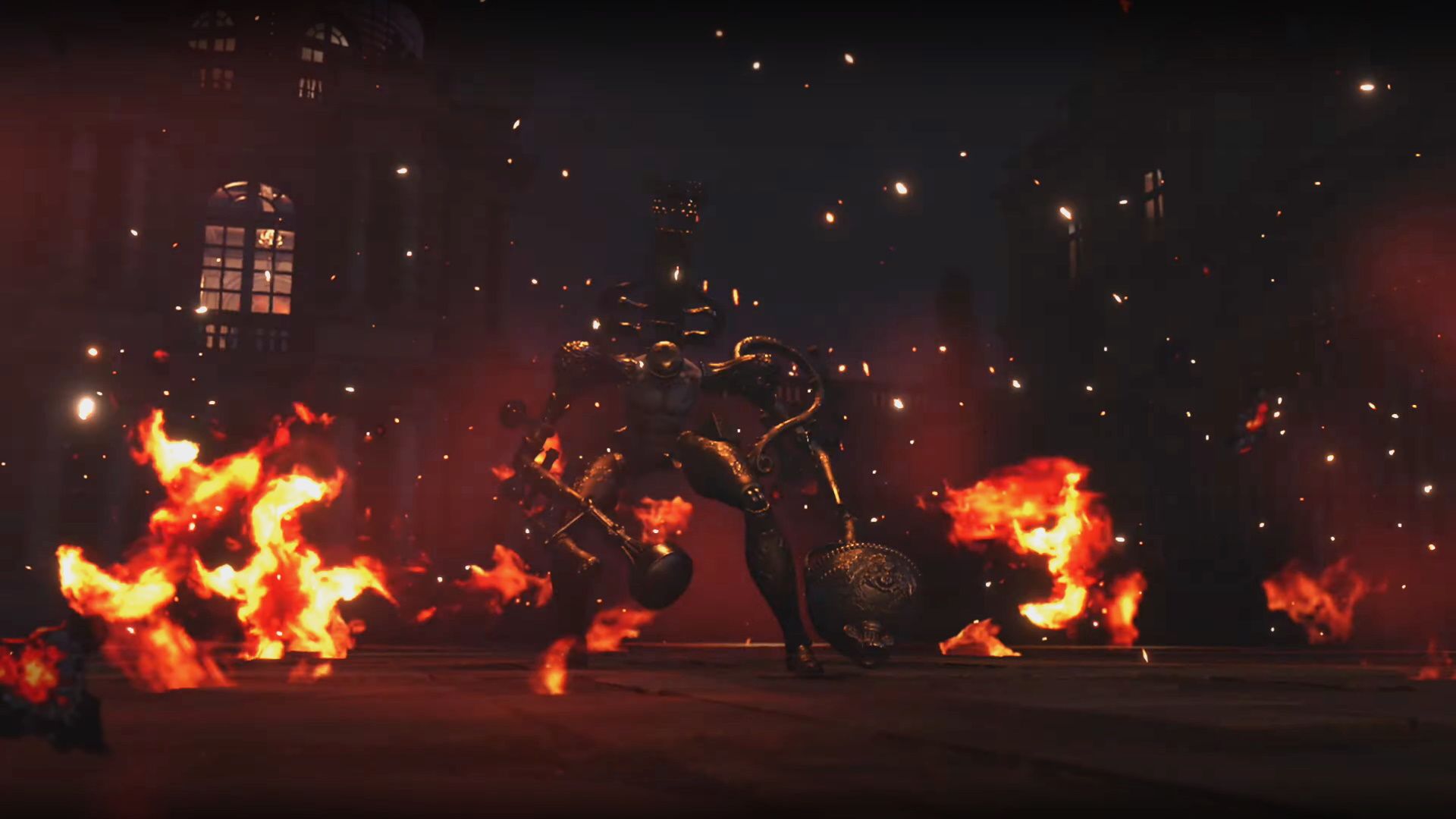 The biggest thing to remember about the Alchemist is that they love distance. If you give it to them, they will take advantage. Your main goal is going to be circling them, waiting for them to recover from a move like their Lightning Blast, or Pot Swinging Combo, and then capitalizing with big hits.

If you are constantly strafing around the Alchemist, and dashing when you see an attack's tell, you will be able to nullify some of their most potent tools. Those Explosive Grenades are a total nightmare if you are at a distance, but they are substantially easier to avoid when you are up close. Try to bait out the pot attacks, dash behind him after the first two swipes, and then hit him with a charged attack in the back. 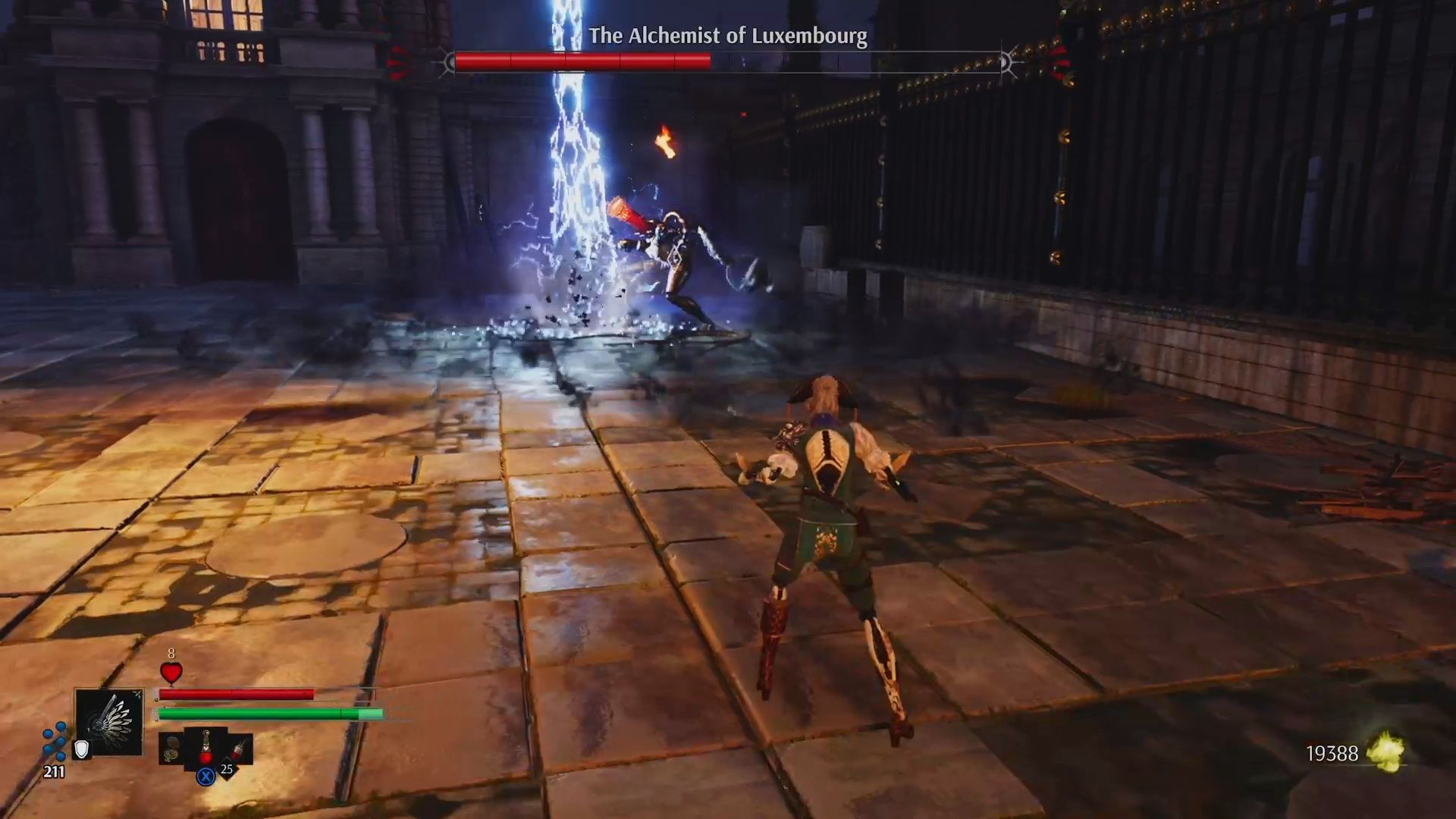 After you get the Alchemist down to half-health, you will enter into the next phase. Here they will cause the edges of the arena to have an elemental effect on them. So, you are going to want to stay away from the edges. Honestly, you are left with more than enough room to work. In the second phase, the Alchemist will start using their Lightning Blast attack. This is a very good thing, as this attack leaves their back wide open. 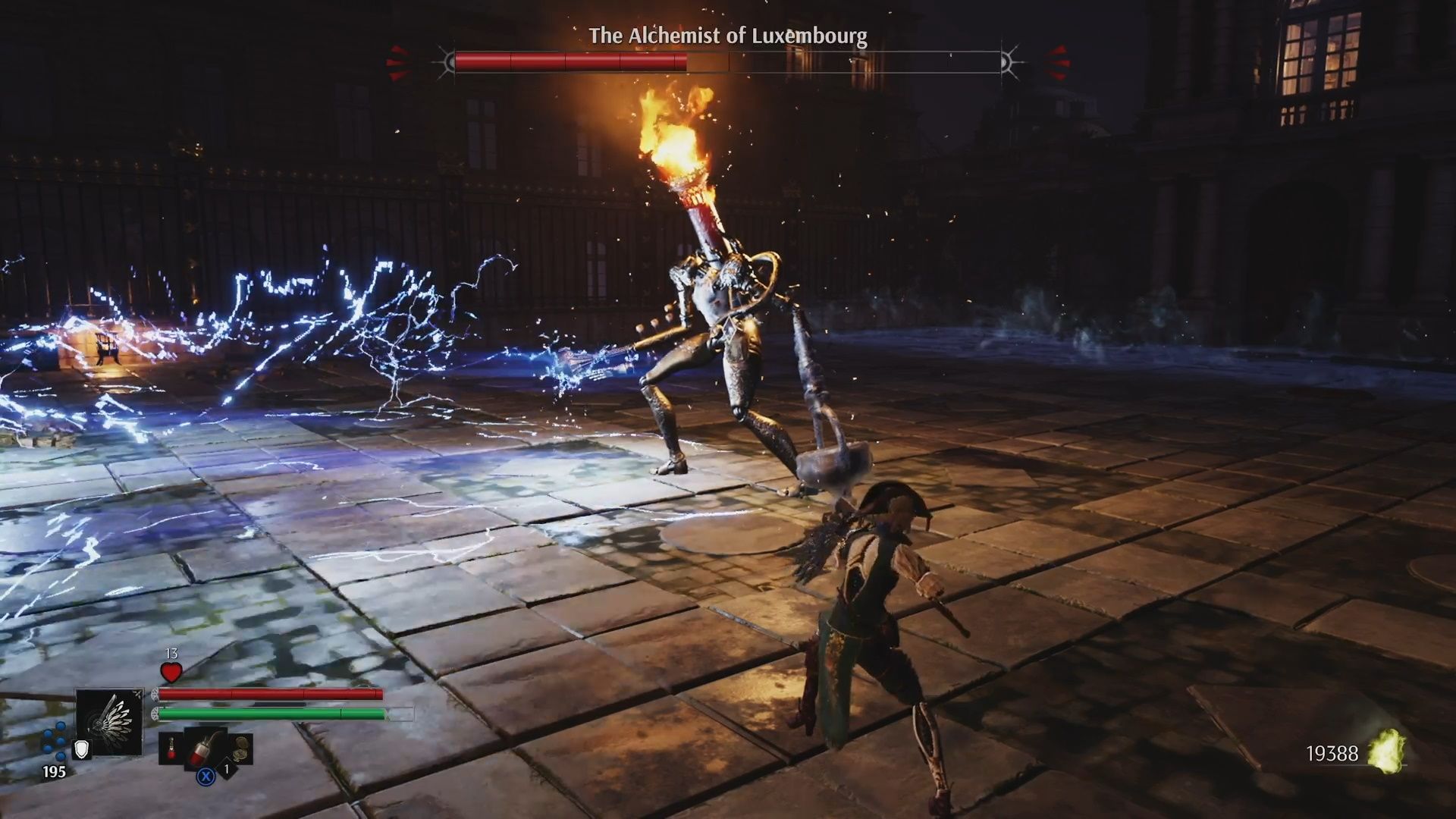 You will want to look out for his Fiery Stomp, and Ice Explosion attacks, and dash away when you see the tells for either, but once those moves subside, get back to your up-close and personal style of fighting. Remember, he loves distance. So don't give him any. Just as long as you stick close, strafe, and back away when you see him fiddling with his pot (the tell for the Ice Explosion) or lifting his leg (the tell for his Fiery Stomp), you will be able to minimize the effectiveness of his offense. From there, just look for the Lightning Blast, and Pot Swinging Combo, and punish them with your hardest-hitting attacks. The Alchemist will fall. 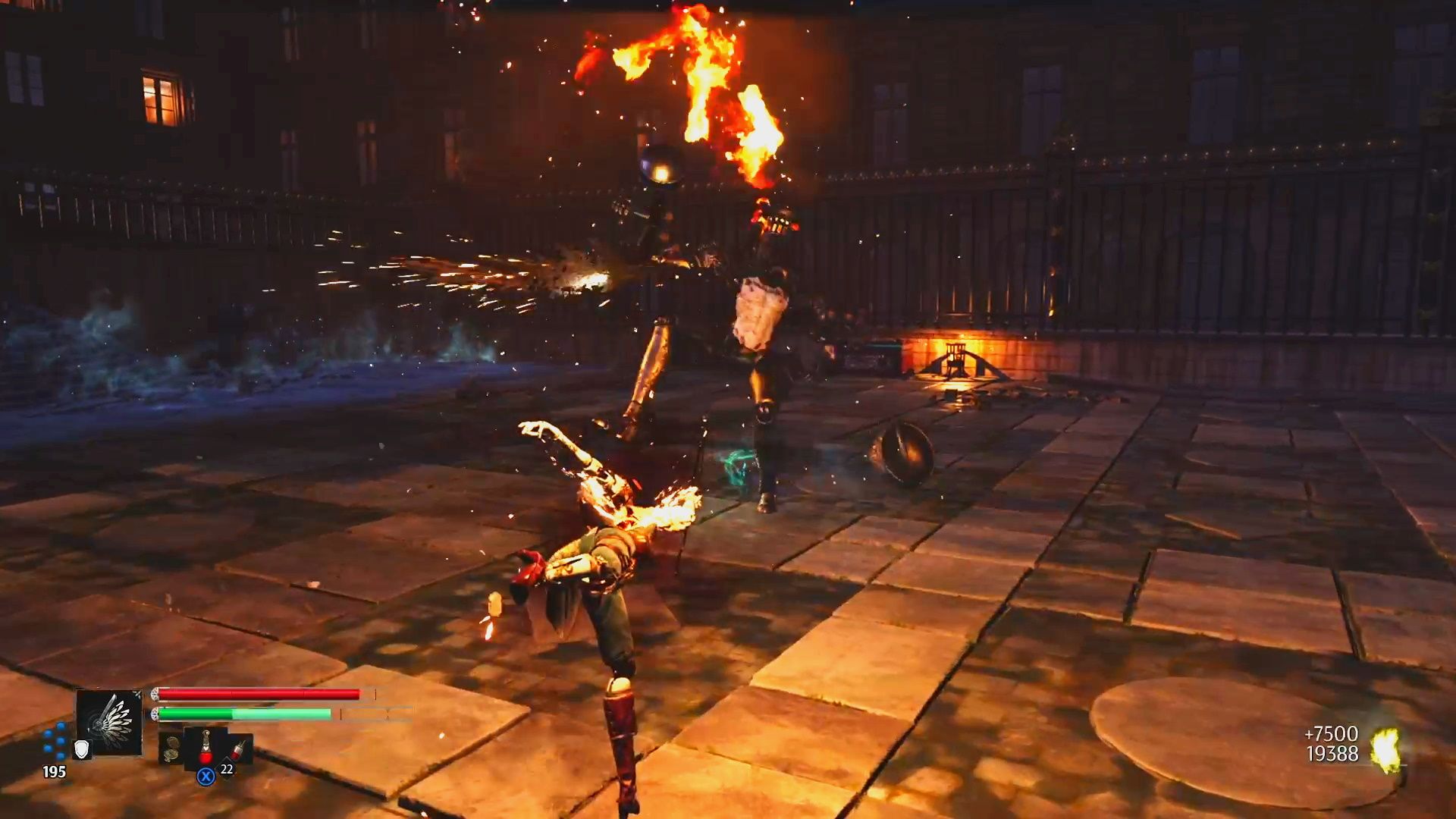 While all the other boss guides for this game tend to end with us telling you that the easiest method for beating the boss is to shoot them with the Shielded Musket and then hit them with charged attacks, that really isn't the case here.

The Alchemist has excellent elemental resistance, so it takes forever to freeze them, and he is more dangerous when he is farther away; so you are actually making things harder on yourself if you try to fall back on this, typically powerful, playstyle.