Squad composition in Symphony of War is crucial. This may seem like an obvious statement in a game focused on turn-based squad combat, but it feels even more important than usual here, as often the majority of units in a squad set certain parameters for the whole group.

If you’re struggling to get the balance right in Symphony of War: The Nephilim Saga, our guide below can help. We’ll first look at choosing units and your leader, before digging in more detail into areas including speed, capacity, the importance of troop position, and more. You’ll be getting a perfect score in each chapter in no time. 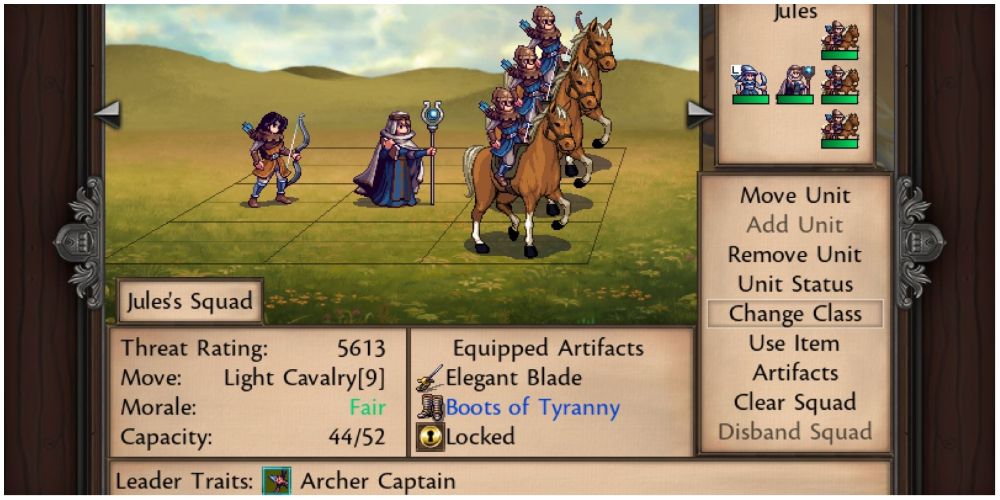 Leadership (LDR) is an important skill in Symphony of War, as your squad leader’s LDR has a direct correlation to how many troops their squad can have. The basic calculation is one unit per ten LDR for the first five units (including the squad leader themselves), plus two more for each unit above five. So, the sixth will cost 12, the seventh 14 etc, up to a maximum squad size of nine.

Traits such as Archery Captain and Cavalry Captain show a character is a born leader of a certain type of troop. These units are perfect for specialist squads, as they give a leadership cost reduction to them of two per that type of unit. So, an Archer squad leader with Archery Captain could have themselves and four other archers if they have 40 LDR.

If you want to increase Leadership across the board from the start of the game, take the Mentorship tech from the Tech Tree. Also, the Light element gives a Leadership boost, so it may be worth changing this on a unit you make a squad leader. Certain items you’ll find, called Affinity Scrolls, can be used to change a unit’s element.

Finally, remember that many Artifacts have a bearing on the cost of Troops in the squad they are attached to. You’ll find most artifacts have either a LDR penalty or bonus, often offsetting their other abilities. So, a more powerful artifact will often have an expensive LDR cost to compensate.

To get the best out of your army, it is important to switch your artifacts around between battles, so you maximise how many units you can get in each squad. Simply taking an artifact off one squad leader and replacing it with one with a lower LDR cost can let you add an extra unit to the squad. 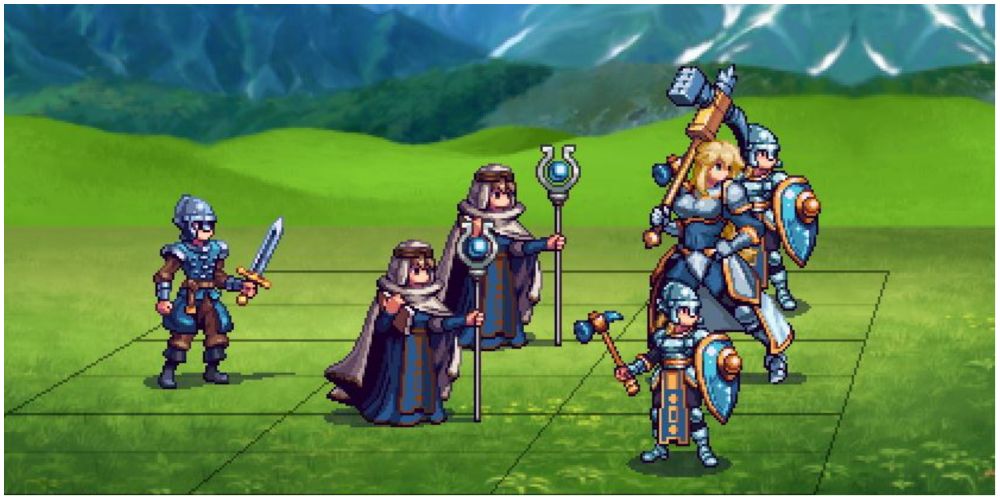 There’s no such thing as a perfect squad in Symphony of War, but there are perfect squads for certain situations. The trick is making them as good as they can be at their job – and to recognise their weaknesses, so that you don’t put them in situations they can’t handle.

For each squad, decide on their form of attack and stick to it – try not to mix and match ranged and melee. You want variety, but within your army – not each squad. This is because many squads you come up against have at least one healer. Healers will take effect each time their squad is attacked.

So, if you have a single archer, they will ping an arrow off in defence of a ranged attack – after which, their healer will probably give its squad more health back than you did damage. However, if you don’t retaliate, they won’t get to heal. If you’re going to have a ranged unit, make sure it is at least half the units in the squad – and preferably more.

Talking of healers, you’ll want to put one in almost every squad. When upgrading from a basic Medic, it is almost always better to choose Priestess over Hospitaler – even in a mounted squad. There is a big gap in the amount a Priestess heals over the Hospitaler. The only advantage the latter has is being mounted. But because only the majority of a squad’s troop need to be mounted to gain the advantages, not all, you can usually add a Priestess to a mounted squad without a movement penalty.

Make sure you’re getting the most out of the squad movement cap. Remember that squad speed and squad type are determined by the majority of units in a squad, not the average. For example, if you have three light cavalry units in a squad of five, you’ll have maximum speed, the ability to ambush, and the ability to move after attacking, as well as being able to launch stealth attacks. You can do anything you want with the other two squad spaces – such as add a healer and a melee unit to go in the back row to protect from ambush.

It's the same with Dragons. As long as half the squad is flying Dragons, you have a flying squad. Just don’t add a cavalry unit, as Dragons clearly don’t like to carry horses! But a fifty percent-plus flying squad will happily carry a Priestess or other type along for the ride. The same also goes for the ‘light’ specification, which allows troops to ambush. Only half of a squad’s troops need to be light for the squad to keep this ability.

Where you place each unit in the nine available spaces is important. The front row is usually for ‘tank’ units: those with strong armour that will bear the brunt of standard attacks. The middle row is for squishy units, such as mages and healers. This is because stealth attacks can target the back row, which makes the missile row the least vulnerable. A unit in front of another unit (including diagonally) blocks melee attacks. They also offer cover, reducing ranged damage. 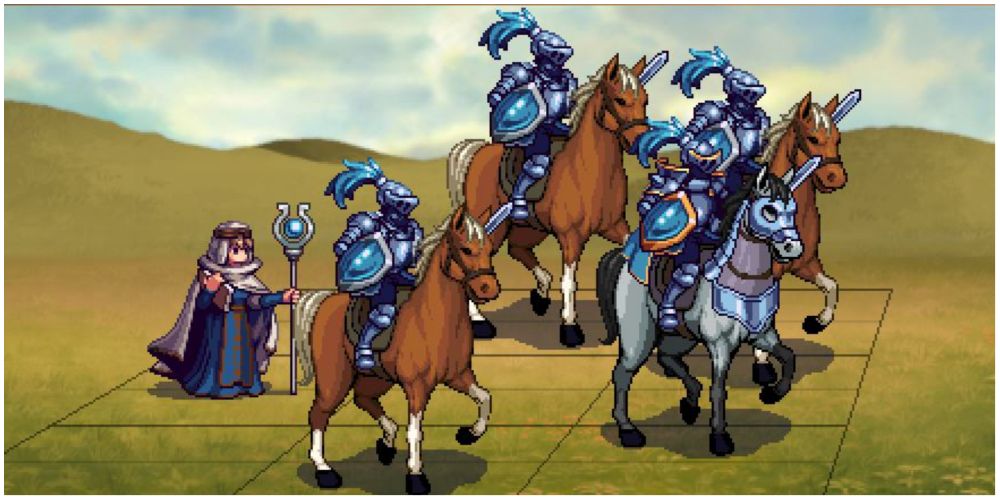 The following are types of squads we’ve found effective while playing Symphony of War.

These are your frontline squads that plan on taking a pummelling. They’ll have three heavily armoured units in the front line, such as Sentinels or Paladins – or Valkyries if mounted. Put two healers (Priestesses or Exemplars – or Hospitallers if required for your mounted squad) behind them. If you have more space in the squad, add what suits you.

The problem with full archery squads, once you get into the game a little way, is how squishy they are. You’ll want them to be purely bowmen, with one or two healers, to be most effective. However, then they’re incredibly weak versus melee. For this reason, try to put together a horse archery squad as soon as possible. A light cavalry ranged unit can move seven spaces, attack at range, and then retreat to safety.

A strong squad of Valkyrie – especially if strengthened with mages and healers – can take out an enemy squad in a single strike without breaking sweat — and still move on afterwards. You may need to use at least one Hospitaller to keep the number of mounted units above fifty percent. However, don’t overdo it – while strong, these units are susceptible to several types of attack, so you need tank squads for them to retreat behind.

As soon as you’ve managed to get three Dragons together, put together a flying squad. Three Dragons in the front row, with two healers behind them, gives you the most mobile AoE squad possible. Dragons damage an entire row, and flying gives seven movement while ignoring water, walls and mountains.

Once you are putting closer to ten squads onto the battlefield, also consider putting together a healer squad. On maps where you’ll have a lot of your squads in one area, it can especially be an advantage to have this squad purely healing your frontliners – as long as you can keep them from being targeted. A full squad of Hospitallers here would be the only time I’d use them, as the advantage of the second movement can be crucial to keeping them out of the crosshairs.