In the years to come, we know things will have changed. But as we write this guide on how to recruit Deneb (and gain the Wicce class) in Tactics Ogre: Reborn, we're in a battle of our own — widespread misinformation. The PSP version of Tactics Ogre, you see, had different requirements.

Those requirements are etched into the minds of the masses. And understandably so. But we're here to relay to you what, as of this writing, few fans have discovered. There's a newer, less tedious, way to get Wicce Deneb to join Denam's cause. Here's how it's done.

How To Recruit Deneb 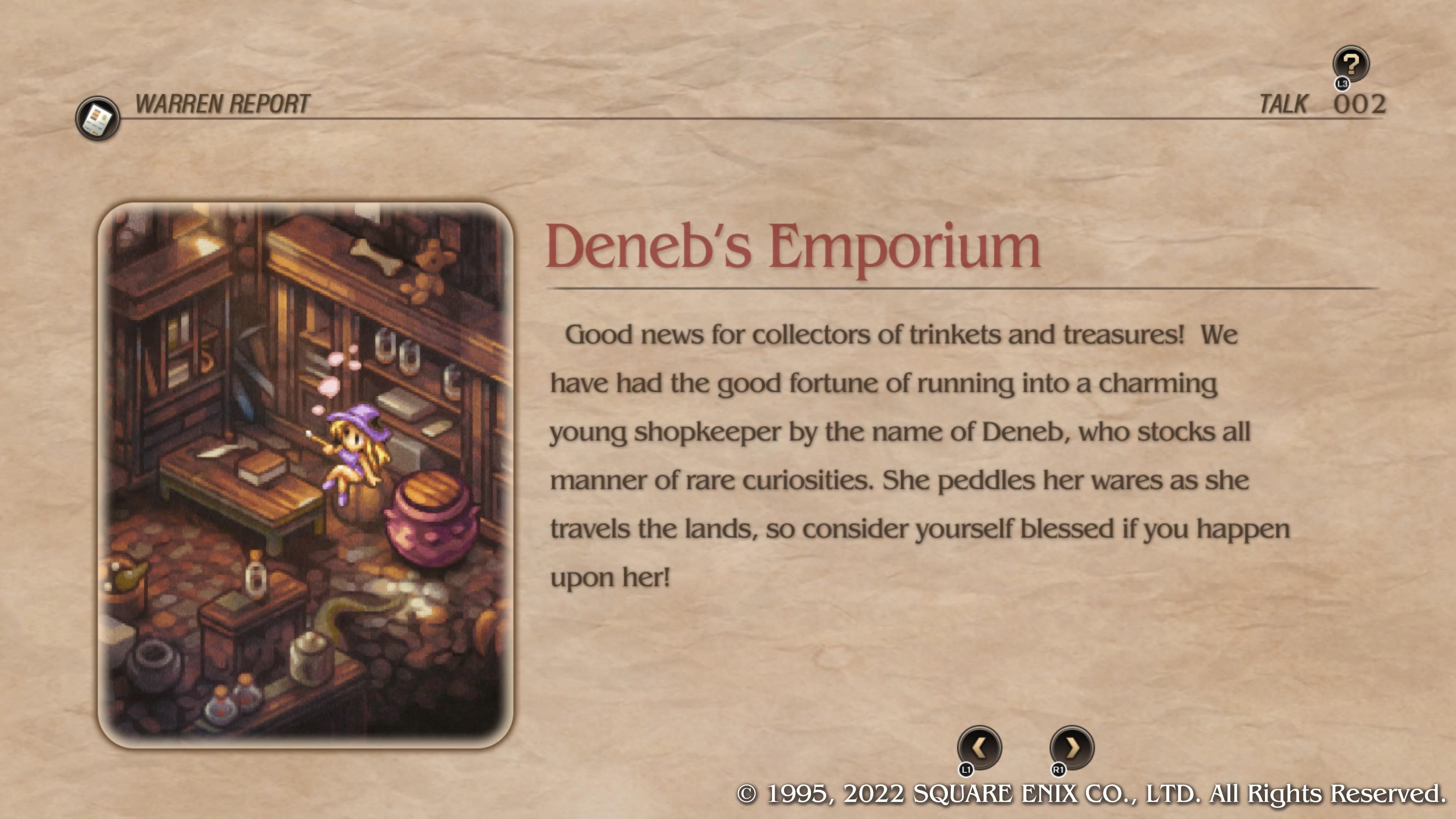 You'd be forgiven for thinking this is the only section of the guide that matters, but in fact, we'll have a separate one for the Wicce class, which is a trickier affair. First, we'll go over how to get Deneb, with or without Wicce.

In Tactics Ogre: Let Us Cling Together, the PSP remake of the 1995 game that many of us have played, recruiting Deneb meant doing what we're about to cover… but more of it. You used to need to get thrice as many of each of these creatures, which slowed things down considerably. In fact, creator Yasumi Matsuno himself has stated Tactics Ogre: Reborn rebalanced this for good reason.

There's an 'Auction' menu when you visit shops. It's entirely possible to beat Tactics Ogre's sprawling story without ever touching it. You auction off monsters here, and in doing so, the shop's inventory of sundry goods expands. A nifty arrangement, though hardly mandatory (not to mention barely explained).

Your goal is to expand the shop's inventory to include every elemental orb (those equippable items that cast area-of-effect elemental damage when used in combat). For the record, it doesn't matter whether you do this at the normal shop or Deneb's special shop, so you can get started on this long before her shop begins to appear in Chapter Four.

How to acquire these orbs for the shop expansion, then? Through the auctioning of Dragons and a handful of potential replacements. This is in line with the earlier version of Tactics Ogre; instead of needing three of each category, however, you only need one. So, if you've read otherwise from older guides, don't waste your time!

You can find most, if not all, of these in the Phorampa Wildwood. Only Flame Dragons, Frost Dragons, Thunder Dragons, and Earth Dragons will appear in the earlier stages, but you're able to access further stages each chapter. We've got a guide on it.

After you've auctioned one of each of the above creatures, your goal is to purchase at least one of each orb. Departing from Deneb's shop afterward triggers a cutscene that leads to her joining. Don't do this yet unless you don't care about unlocking her Wicce class, which is substantially more powerful than her default Witch class!

How To Unlock Deneb's Wicce Class 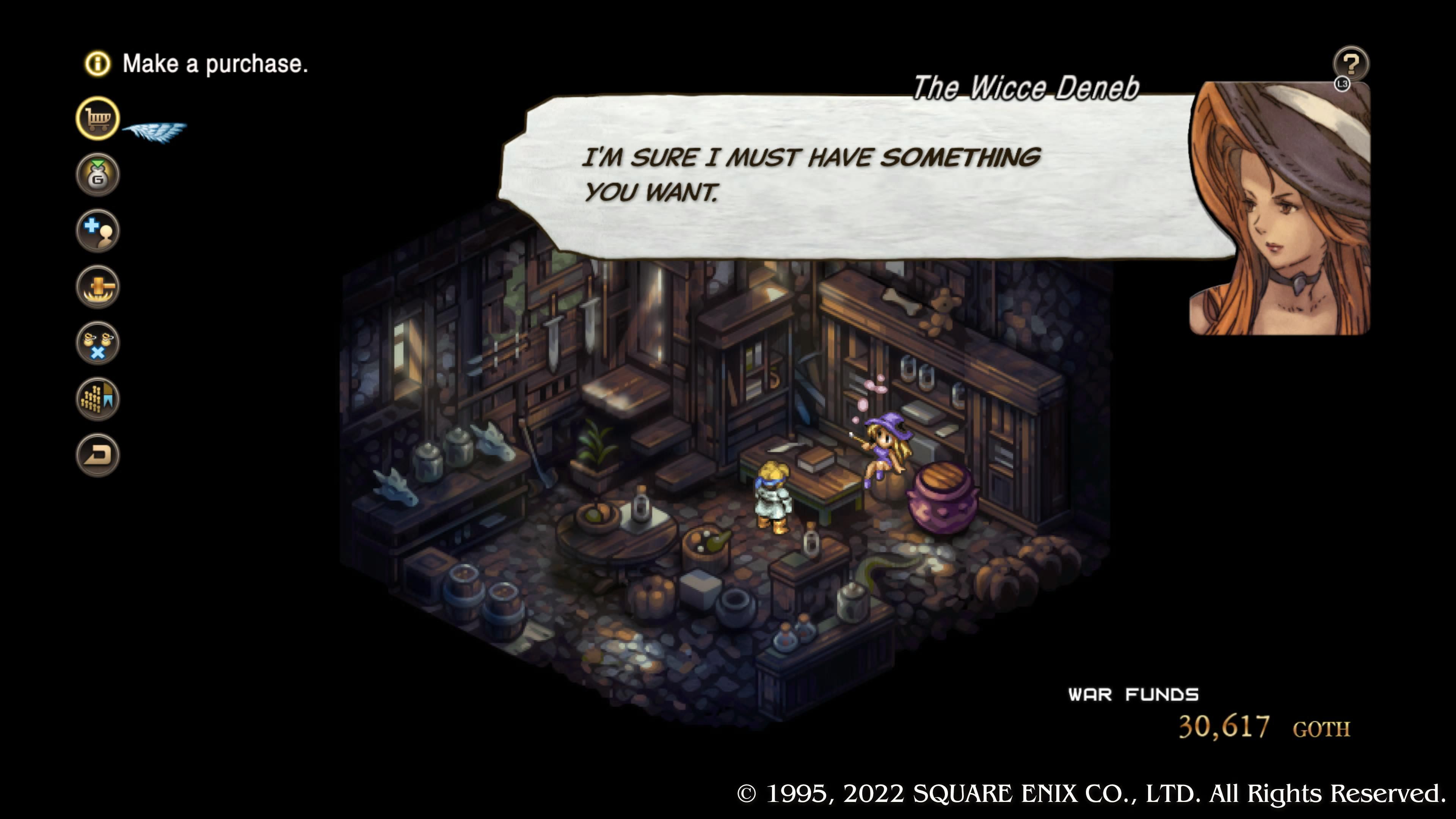 In the olden days, this next part was all about collecting 30 (!) of an item called Glass Pumpkins. Things are easier now, but radically different. Instead, you must read 'Mysterious Blast on Exeter' in the Warren Report's 'Talk' section. This pops up fairly early in Chapter Four.

Refrain from recruiting Deneb just yet. Clear the battles en route to the Palace of the Dead. On the third floor, search the northwest for a rather obvious portal door. Following the fight, a brand-new late-game mechanic is introduced: Upgrading Relics at shops. (Major props to hard-working and industrious launch week players like MerRyan for confirming things we needed double-verified!)

Unsure what a Relic is? Relics are weapons with a pinkish background. They're special in that these weapons can be combined to forge newer versions, and they're exclusive to Tactics Ogre: Reborn. If you've ever played an MMO like Final Fantasy 14, think of these as epic-tier loot of sorts. You can snag them off recruited foes throughout the game, mainly in Chapter Four. You'll find some naturally through optional dungeons as well.

What's next? You need to use the 'Upgrade Relic' menu at a shop three times before you've finished purchasing one of every orb. Remember, don't grab every orb beforehand, or Deneb will join as a regular Witch! Only after you've upgraded three Relics should you do so. With three relics upgraded, and every orb purchased, leave Deneb's shop, and an event occurs, leading to a battle at Vasque!

The main enemy here isn't so tough, though the horde of them can make things taxing. Keep Deneb alive at all costs, or else the whole sidequest will have been for naught. Once the scrape is behind you, and provided you did both parts of our guide, Deneb joins Denam's army with her special Wicce class capable of some serious magical firepower. You may never look at other mage classes the same way again…