Constructed languages are not all that uncommon in games. Probably the most famous and well-documented example would be Simlish from the Sims, but there’s also Animalese in Animal Crossing (behind the vaguely chiptune-ish noises that the villagers chirp is an actual language, which is mostly English) and most recently, the mysterious glyphs in Tunic. But one of the most memorable made-up languages is in one game that you may not expect: the alien language in Star Wars: Knights of the Old Republic.

But referring to this language may be a bit of a stretch, since it isn’t exactly a fully fleshed out one at all; fans of the series will know that it’s simply a handful of several gibberish phrases, said over and over again regardless of the dialogue and context, with these words pronounced in a manner that’s somewhat unique to each alien races in KOTOR: the Twi’leks, Ithorians, Hutts, Bith, Rodians and more. What’s crucial to note is that these aliens don't all speak the same alien language within the universe; it’s just that the same gibberish phrases—examples include “kee poona”, “mucha shakka pakka”, “bonana keechu” and “achutaa”—have been recycled for most conversations with the various races.

In fact, here’s an example:

Unlike the somewhat more nuanced presentation of alien languages in other Star Wars media, this particular KOTOR language appears to have been a mishmash of Huttese, which is spoken by the slug-like species called the Hutts, and Ryl, the language of the Twi’leks. These same few phrases were so overused in KOTOR that it has since become an inside joke for fans of the series, with them repeating these very phrases on forums. But while some players have found these recognisable phrases distracting, the language, at least to me, did a pretty banged-up job of quickly immersing me in the game’s otherworldly appeal; after all, despite playing the game more than a decade ago, I can still distinctly hear the same few alien phrases ringing in my head. 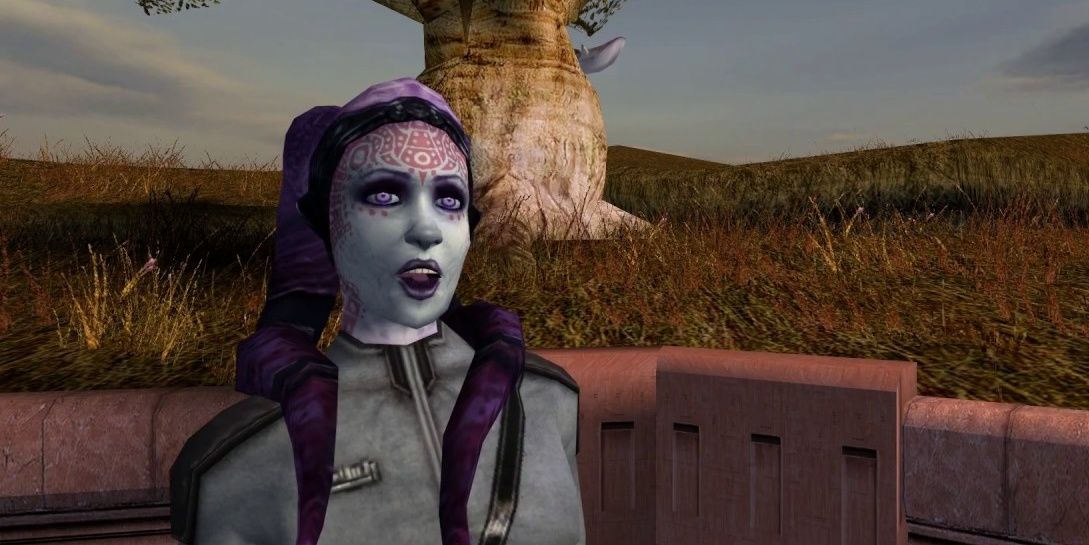 But the ludicrousness of this repetitive, jabberwocky nonsense reached its apex in a particular KOTOR quest. It involves a stowaway named Sasha, a young girl who sought to flee her Mandalorian captors by hiding in your starship, the Ebon Hawk. When you eventually find her on the ship, you realise that she’s speaking in an indecipherable dialect, which is a surprise because you usually have no issues understanding most alien languages. Turns out she was speaking pidgin Mando'a, the language of the Mandalorian people, and a significant part of the quest involves attempting to understand what Sasha is trying to say. The hilarious twist, however, is that what she’s saying in subtitles doesn’t line up with her spoken dialogue, which is still predominantly made up of the same KOTOR babble of her repeating “mucha shakka pakka” over and over again.

Perhaps the huge undertaking of creating unique alien dialogue for every single race in KOTOR was too big of an undertaking at that time for Bioware, but the quirks of this peculiar language did little to dampen the appeal of the game, even close to two decades later. A note to the developers: please don’t alter this KOTOR gobbledygook for the game’s remake next year.