As a series that focuses on the most unsettling downfall of humanity by turning people into walking scabs, The Last of Us has more than its fair share of scary moments. Just mention the university basement, school gym, or elevator scenes from Part 1 and any fan will curl up in a ball and slowly rock back and forth, trembling as they murmur “Grounded run” to themselves over and over

These sections are enough to send shivers down my spine even after having played through the first game six times, but there’s no moment in the series quite as terrifying as the Rat King encounter in The Last of Us Part 2. This grotesque behemoth runs with the body horror tones of the series in a way that the Bloater only dipped a toe in, creating one of the game’s most memorable moments.

The Rat King is encountered towards the tail end of Abby’s half of the story, as she sneaks around the same hospital that Ellie eventually turns into a graveyard. While in the lower parts of the hospital that have long been abandoned since the infection hit, Abby looks around to try and find a medkit for Yara.

As you're exploring the abandoned wing of the hospital, you’ll realise that things are a bit quiet. Too quiet. Usually The Last of Us takes any chance to chuck Clickers and Stalkers at you in the dark, but this time you’re met with nothing but silence. Everyone else is afraid of this area, and the eerie emptiness builds to dread once it’s clear something awful is coming up. 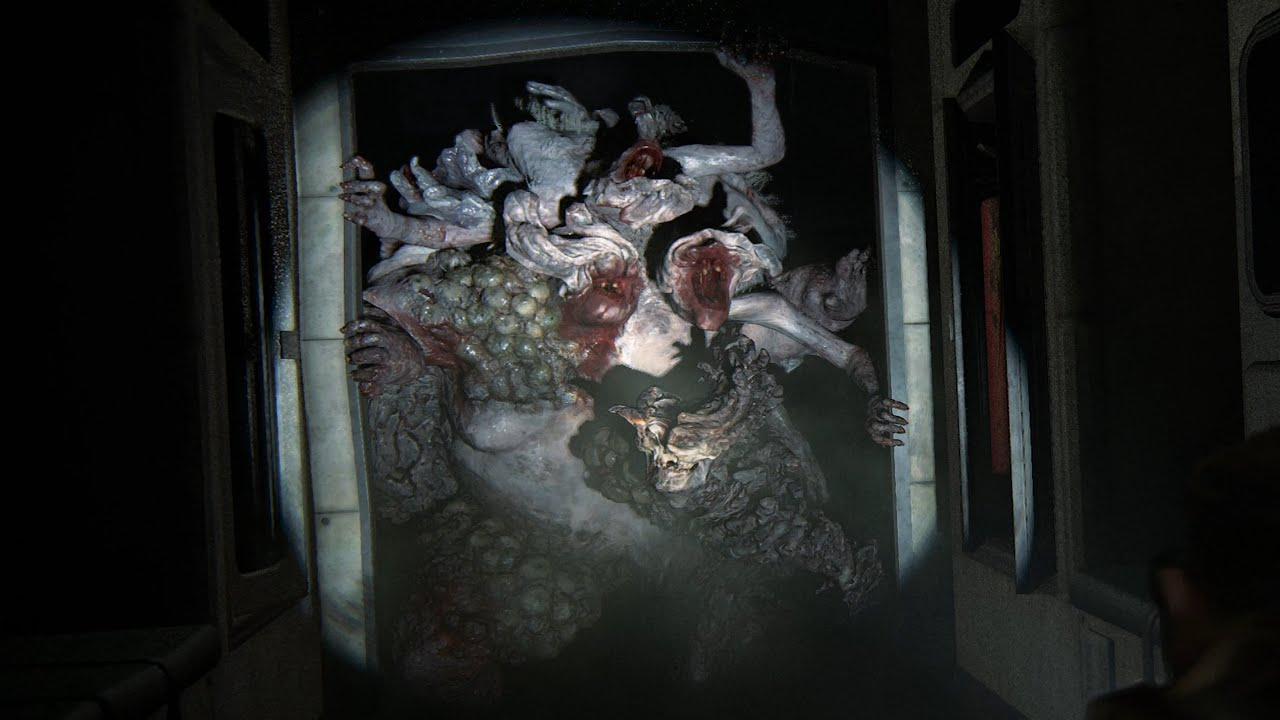 After some looking around, Abby eventually finds an ambulance, which thankfully has the medkit inside of it. It couldn't have been that easy, could it? At this point, you’re preparing for at least a swarm of Runners to attack you, or a Bloater if Abby’s luck has run out, but Naughty Dog introduces something far, far worse.

It’s at this point that the Rat King rears its ugly head, revealing the most monstrous form of infected the series has ever seen. This hulking behemoth is the amalgamation of infected that have been sitting around together alone since the infection first began, and it is terrifying.

As the Rat King screams at Abby, all she can do is scramble behind her for an escape, at a complete loss for words at what she's seeing, cementing that this is the apex of the infected and something that's never been seen before, by both Abby and the player. After sprinting through doors that picked the worst possible time to stop opening and seem to have conspired with red lights to make the Rat King even more terrifying, the boss battle begins and it doesn't disappoint.

Scrambling around for ammo and having to stay out of range of the Rat King at all times is a clear callback to the Bloater encounters in the first game but the strength of the Rat King and the dark, claustrophobic areas mean the horror is turned up to 11. It's also a much harder fight, as the Rat King has a ton more tricks up its sleeve (sleeves?) than anything any of the characters have ever faced before.

Much like the Bloaters, you need to throw everything you have at it. Here though, as you damage it more and more, the Rat King will split off bit by bit. Gnarled bodies will slither off from the mass of twitching flesh, the Rat King ever weakening but outnumbering Abby more and more. As these smaller Stalkers chase after Abby, you need to focus on one thing to avoid being overwhelmed and overpowered. There are moments in The Last of Us Part 2 that made me want to put the controller down to stop the brutal, pointless revenge, but the Rat King made me quit out of fear.

Much like how the cordyceps fungus is a real-world affliction that affects ants, the true horror of the Rat King is that it’s not too far from reality. It’s based on a phenomenon that rats experience where their tails tie up with one another and they form one combined being. In that case they’re not San amorphous blob of flailing zombie limbs, but it’s close enough to be believable, which is exactly what The Last of Us does best.