For a long time survivors of the devastating plane crash on Great Bear Island feared the quietly shambling shape of a black bear above all else. But there's a new nemesis in The Long Dark that can end your run for good.

Moose may be herbivores, but that doesn't mean they'll hold back when it comes to defending their territory and crushing your ribs. So why hunt such a dangerous animal? Well, because the loot a single moose provides includes up to 45kg of calorie dense meat and the prized hide, which can be crafted into a Moose-Hide Satchel. There is a moose spawn location on every regional map, so get tracking. 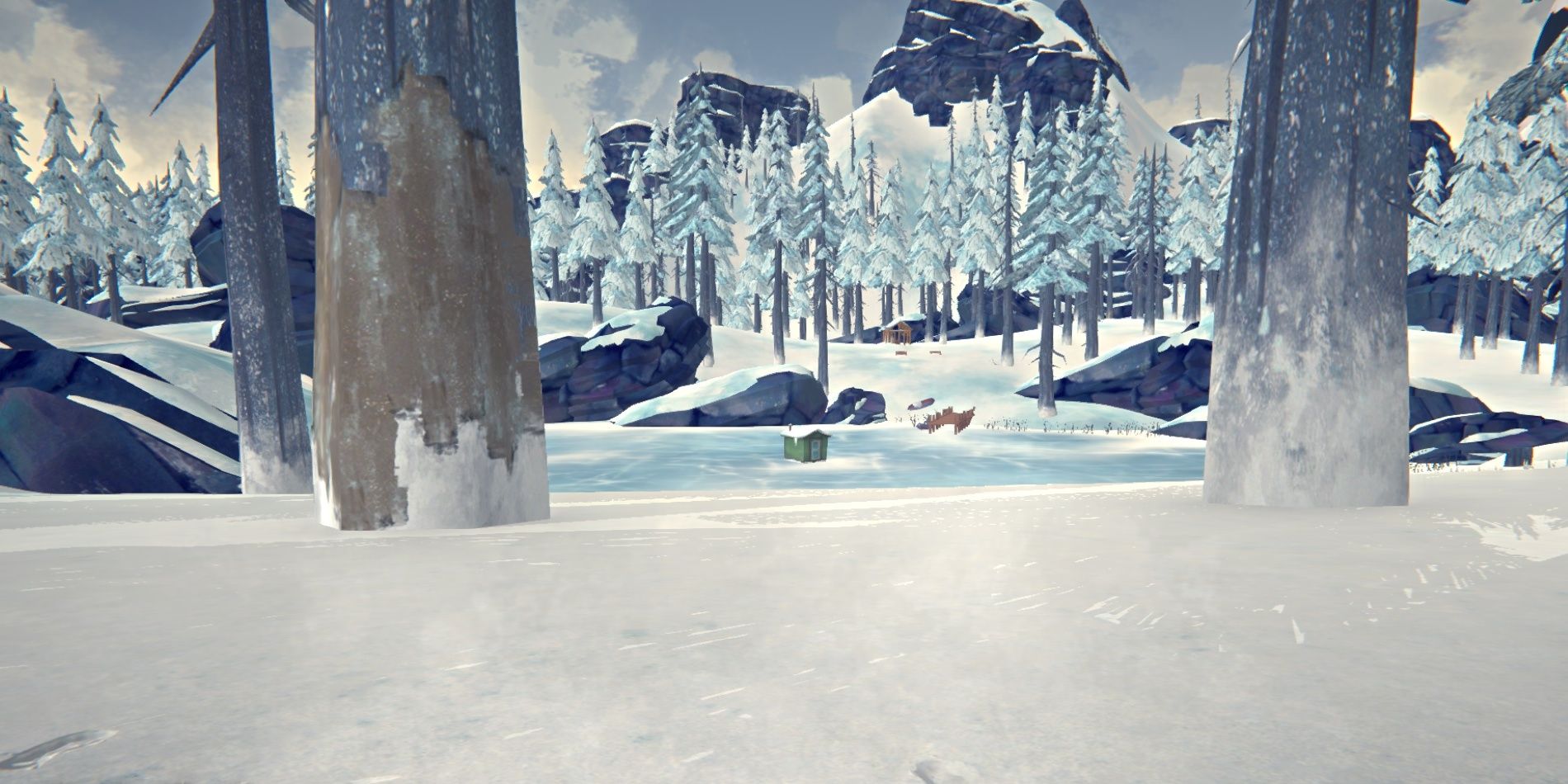 Pleasant Valley is a large map and with only two spawn locations for a moose (but plenty for bears, so watch out). The safest place to camp out and wait for the elusive beast is at Pensive Pond, which is close to the transition point to Winding River. Here you'll find a fishing hut to wait out your days in relative comfort.

To the east of the outbuildings and barn is the ruined Lonely Homestead, buried deep within the birch forest. Among the white trunks you might spot your quarry, but keep an eye out for the resident bear too. 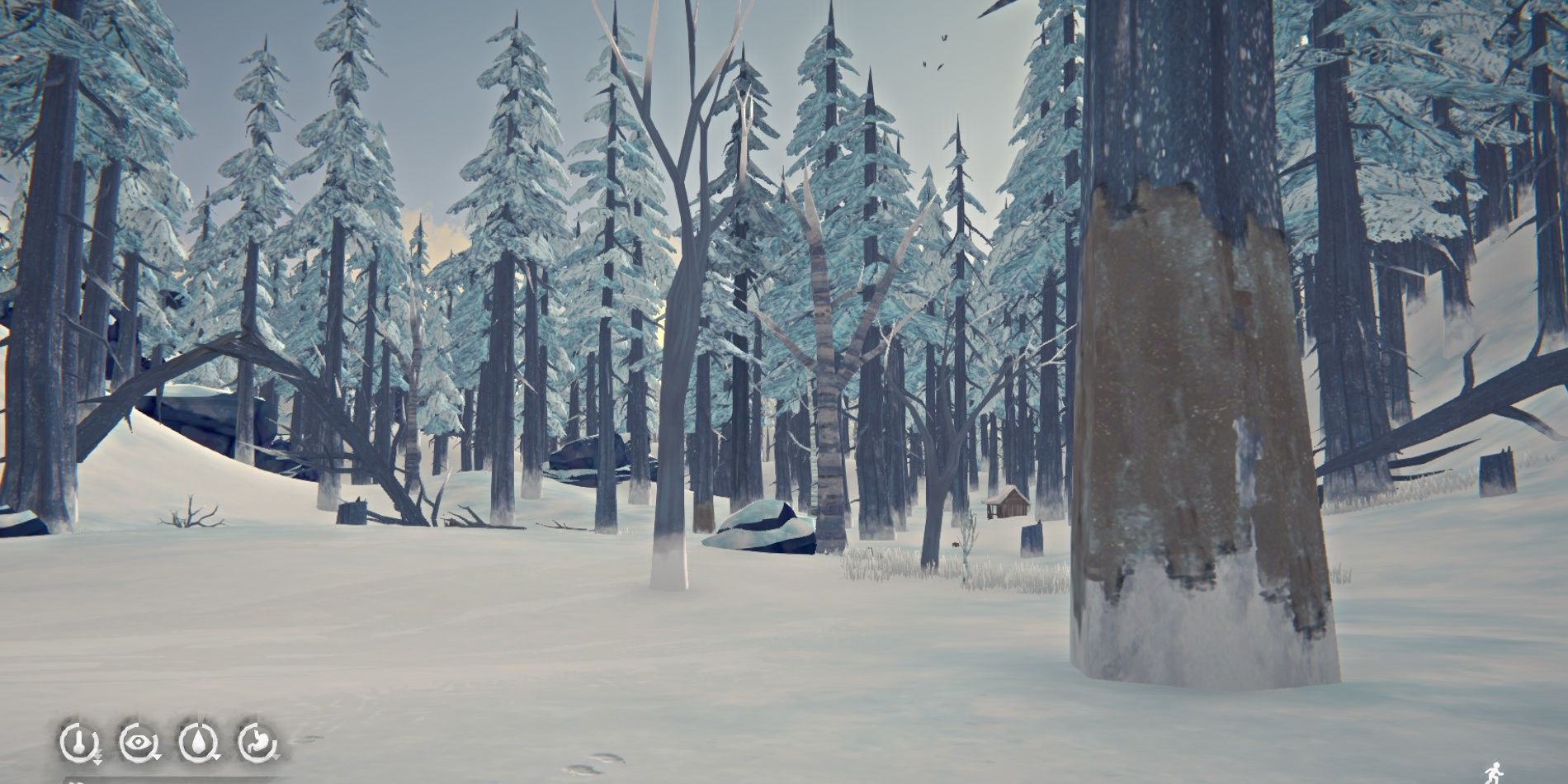 Often a starting map for new players, Mystery Lake has a great assortment of buildings to loot as well as wide open areas to get lost in. A couple of places that are good to set up base in are the Hydro Dam and Trapper's Cabin, both of which have moose spawns nearby.

It's not uncommon to spot the beast wandering along the frozen river outside the Dam, or trotting into the clearing outside the cabin. If you're not having much luck in either of these places, try the cabin east of the Unnamed Pond where you can see trees have been rubbed by moose in the area. Hiking between the two cabins is a good way to increase your odds.

Fortunately, both moose spawns are right next to the best place to base on the whole map. The Mountaineer's Hut may have a huge hole in the roof, but at least there's a fireplace and a bed for you to recover from your broken ribs in. If a moose detects the player nearby it will lower its head and enter an aggressive stance, often pawing the ground and snorting. If you're brave enough (or stupid enough) to stick around make sure you bury a couple of arrows or bullets in its head, or you'll be nursing the broken ribs affliction for weeks.

Near the Landing Gear at the transition zone to Pleasant Valley you can spot a moose grazing in the clearings. Alternatively, hike towards the Wing in the woods, and you'll encounter every kind of wildlife in the game, bear included. Stay alert if you decide to hunt here.

This is one of the smallest regional maps, and is often visited solely to use the furnace in the Riken. If it's a clear day, you should spot a bridge from the ship's deck, with Matt's truck underneath it. This is the only place a moose can show up in Desolation Point, so keep checking back as they spawn and despawn randomly.

Moose are huge creatures, but their territories can be equally massive, and their spawn timers are few and far between. Once you've downed a moose you won't spot another one on that map for up to 140 days, depending on the difficulty your world is set to and how many days you've survived. So luck is going to play a huge part in coming across this walking food pantry.

The area added during Episode 4 is full of one-way routes and has huge looting potential. If you want to spawn camp the moose you're in luck, as both territories have a livable building nearby. The frozen pond outside of the prison often has deer and rabbits grazing, but if you check regularly you might find a moose has turned up as well.

If the prison is too overrun with Timberwolves for your liking, try the Bricklayer's Retreat at the easternmost part of the map. This idyllic cottage scene doesn't get many wolves wandering through, and the pier overlooking the frozen lake is the perfect hunting spot for deadly fauna such as this.

For the size of the map, the Broken Railroad is jam packed with moose. The aptly named Hunting Lodge has the perfect spot for picking off wolves, deer and the resident megafauna.

If it's not turning up as often as you'd like, try climbing down the nearby rope and creep into the Hunter's Blind. On the other side of the lake you'll see the moose rubbings on various trees, giving you a good spot to snipe one from safety.

Most of this map is chock-a-block with abandoned residential areas which aren't popular with moose. However, if you wander to the south of Paradise Meadows Farm and clamber down the ropes into Milton Basin it becomes pretty wild. Among the birch trees you might spot a moose in this hidden haven away from town.

If that seems too out of the way for you there's a habitable trailer in the north, close to the transition zone to Hushed River Valley. Look out for the scratches on surrounding trees, and a hulking beast might loom out of the fog, ready for a showdown.

This is another region that has surprisingly few moose sightings despite its vast size, but it's one of the safest spots to learn how to hunt moose. For many players prior to the Rugged Sentinel update, it was easy enough to land a few shots on a bear and then hide somewhere inaccessible. A little while later crows would appear to show you where the bear had bled out and died. The developers decided that was too easy, as this is the only creature that will never bleed out.

Outside the Quonset Garage in the Coastal Town a moose often wanders down the hill to graze among the cars. An unsure player might want to take a potshot from beside one of them, and duck inside if the moose charges. There's no shame in permadeath games.

Bleak Inlet has the most reliable moose in the game. Regardless of difficulty, time survived or weather conditions, a moose will greet you at the Hunter's Blind when you arrive coming from Forlorn Muskeg. It also seems to respawn more quickly than any other location.

The other likely area is just south of here, near the Washed Out Trailers. Be careful not to get caught out on this map, even if you survive a moose stomping you'll likely have to contend with a pack of Timberwolves taking chunks out of you while hobbling to safety.

There are three territories our thick-skinned friend can appear in, out on this creepy, unforgiving swamp. If the playing is heading south towards Bleak Inlet there is a wooded area where a moose sighting is possible. A few caves are scattered nearby to cure the hide. If it's Mystery Lake you're aiming for, the open area just to the north is a great place to hunt for all wildlife, including the elusive bull.

Finally, up on the Marsh Ridge which connects to Mountain Town, is a predator free woodland. Sit a while here to keep an eye out for a moose, but otherwise there's a nice cave to wait out cabin fever. 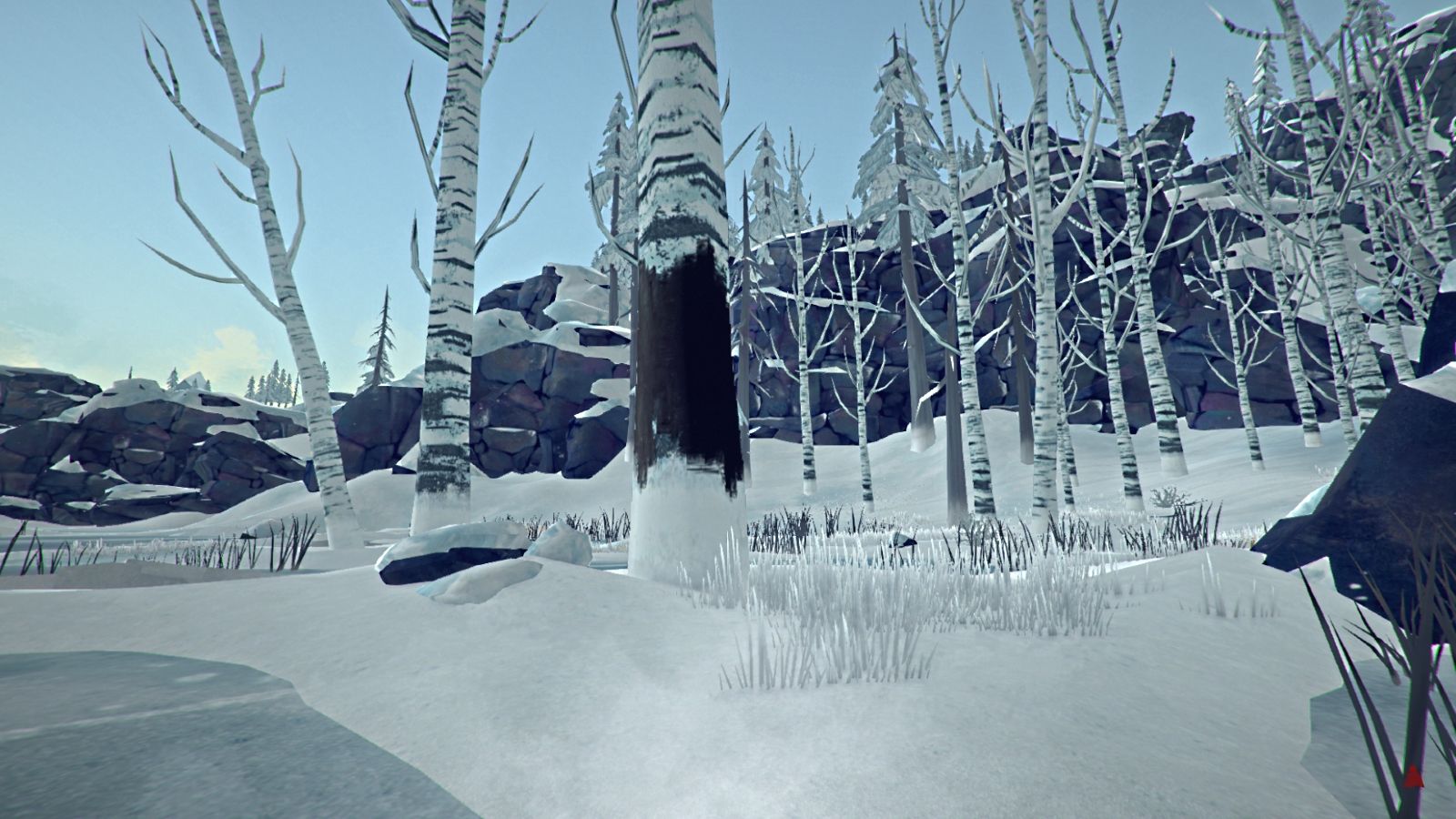 The Hushed River Valley is an unforgiving landscape, with sudden cliffs, one-way slopes and no inhabitable buildings. But it's also one of the prettiest regions, especially when the Twin Sister Falls throw up a double rainbow at the lowest point of the valley. Down here is the perfect spot to hunt a moose, as the aptly named Moose Overlook can offer some survivors a Survival Bow and a great shot.

Climbing the ropes by Valley Cave, the player will arrive at Pensive Vista. Pull out your charcoal here for a brilliant map addition. Just north is Monolith Lake, sporting a huge, monolithic island to scope out moose from safety. And if you can't wait for the hide to cure, try following the smoke to the Mysterious Signal Fire. You might find a Moose-Hide Satchel hanging from a nearby tree. 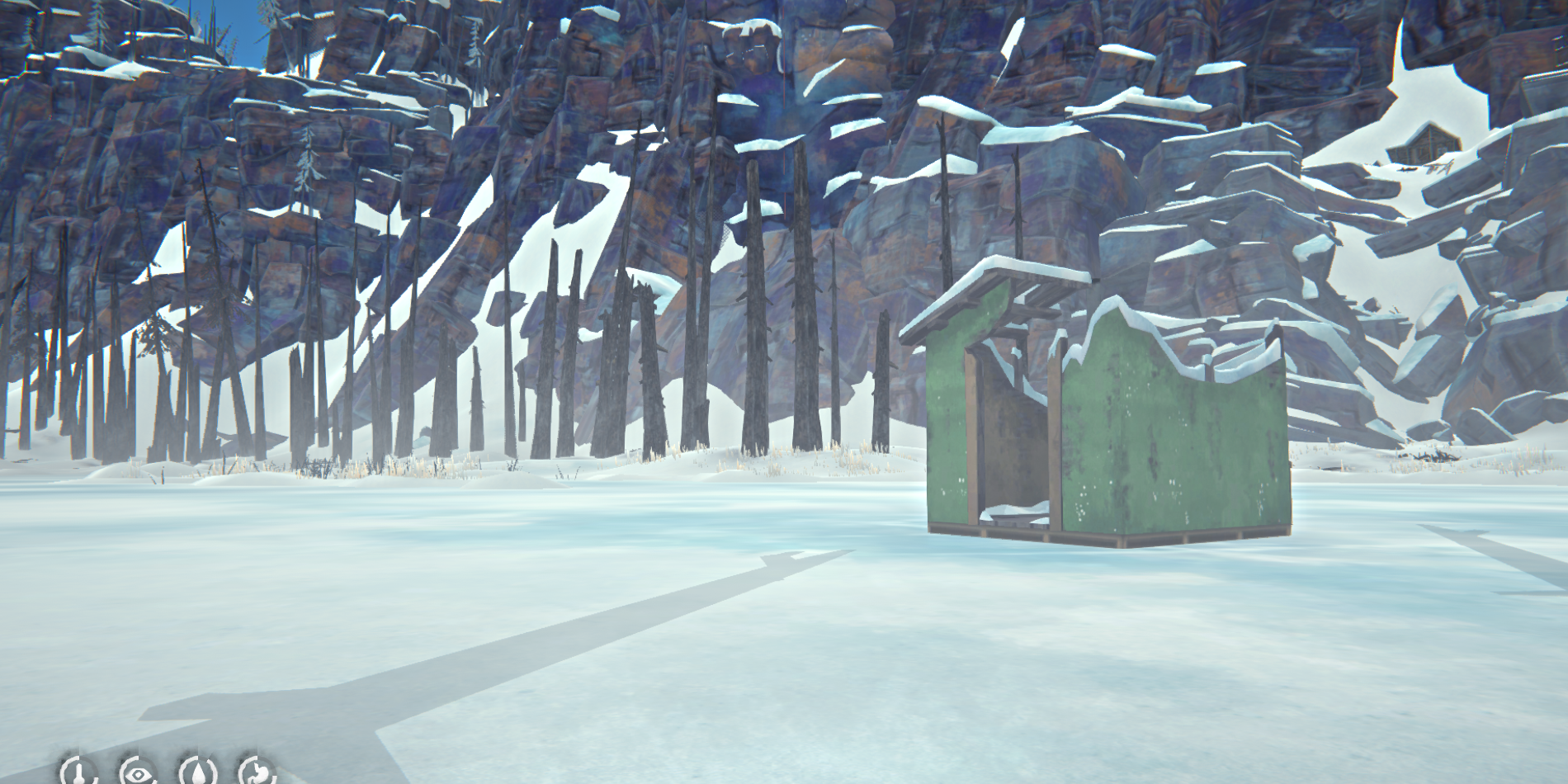 When heading home after picking up your Crampons from inside the Gold Mine, you might want to step inside the Stone Shelf Cave for some respite. Be sure the coast is clear before emerging, as you wouldn't want to damage your new accessory in a moose stampede. The birch woods in this area can spawn the beast from thin air when you're not looking.

Alternatively, it might turn up in the Bitter Marsh, a wasteland of burning trees and ruined buildings. There's nowhere safe to run if you round a corner and find you're face to face with a territorial moose. Just shoot and pray your Expedition Parka doesn't get ruined.