Developed by RocketBrush Studio and published by Team17 Digital, The Unliving is a Roguelike game that allows you to play as The Necromancer and raise an army of the undead. You're left in a massive world filled with humans, and you have to tear through them using different abilities and spells.

You tried a certain rite along with your disciples that didn't go as it should have, and now you must get different shards if you want to make yourself whole again. There are many ways to upgrade The Necromancer and the undead that will help you in your endeavor. 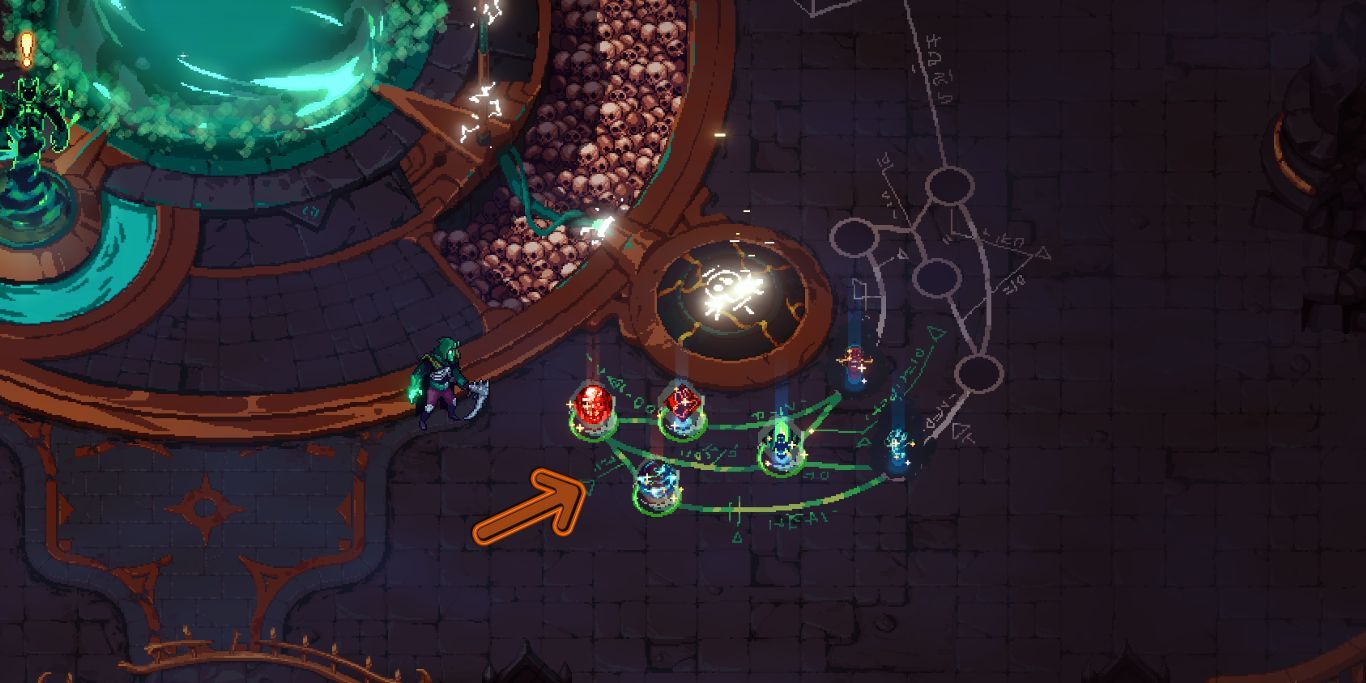 When you first start playing The Unliving, Arkhe upgrades will be the only ones available to you. Once you've finished the tutorial and died at the hands of "The Voice", you'll be taken to a place called The Edge of Immortality. Here, you'll be able to talk to The Lieutenant, Majra The First Student, and Phylacterium.

The shadowy figure called Phylacterium will look just like the figure that killed you during the tutorial. He'll mention that he's a part of you that got disintegrated during the rite. After talking to everyone, you can start performing your first Arkhe upgrades.

To do this, you have to head back near The Lieutenant who is near your spawn point in Edge of Immortality. Just above him, you'll be able to see a tube with green liquid in it, and there'll be multiple small white circles across the entire area. You have to spend your Arkhe to upgrade either Awakening Explosion or Blood Rain to progress further. 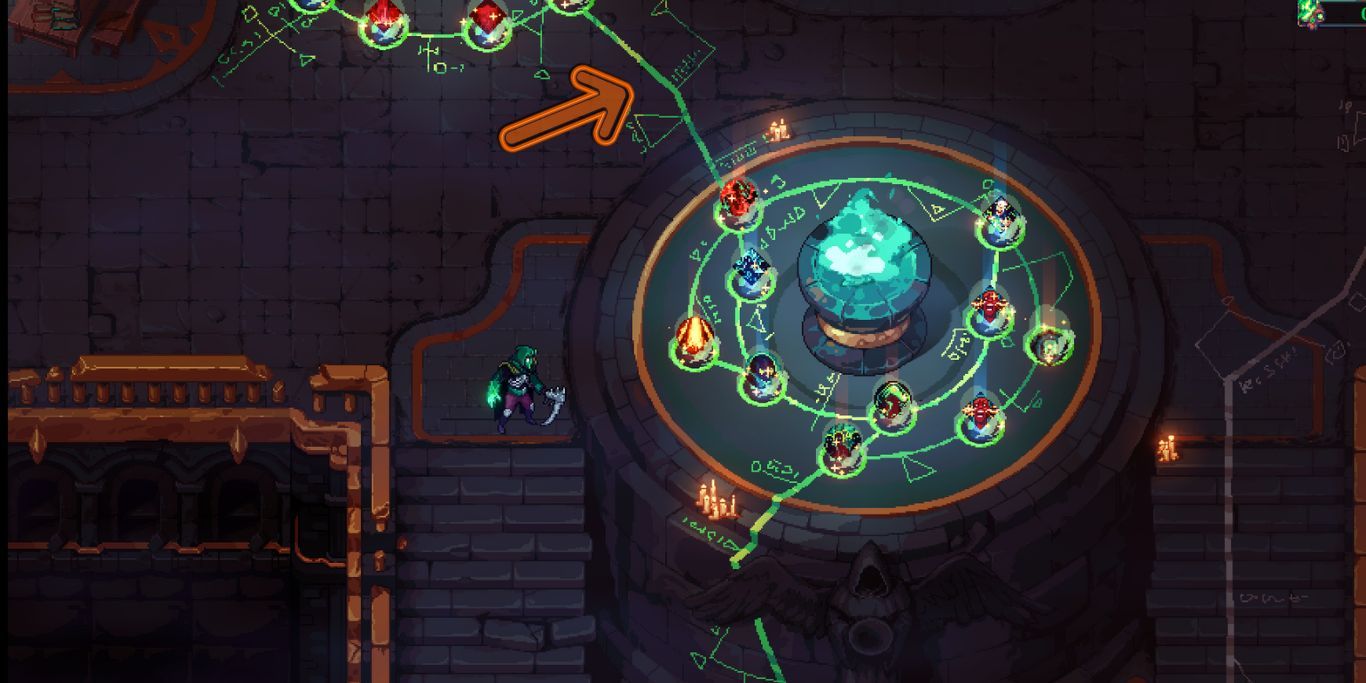 After spending Arkhe to get a certain ability circle, the next one on the path will unlock. If there's a white circle that is joining two different paths, you'll have to upgrade both of them fully to unlock the connected circle. Furthermore, these circles are divided into visible groups, and you will see one white line between them.

To get to a particular group, you have to unlock every single spell or sacrificial rune in the previous one. It's a progression system where you can't skip a certain ability just because you don't like it.

Unfortunately, the spells and sacrificial runes that you spend Arkhe on won't be given to The Necromancer automatically at the start of the raid. Instead, you will now have a chance to get them as one of the three options whenever you interact with the altars that contain different kinds of Essence.

Furthermore, if you beat the Burial Isle and get to the second area, you'll have another group of Arkhe upgrades unlocked at the top of Edge of Immortality near the portal that sends you out again. This group will have amazing spells and runes that will require a high amount of Arkhe to unlock.

Here's what spells and sacrificial runes do for you in the game: 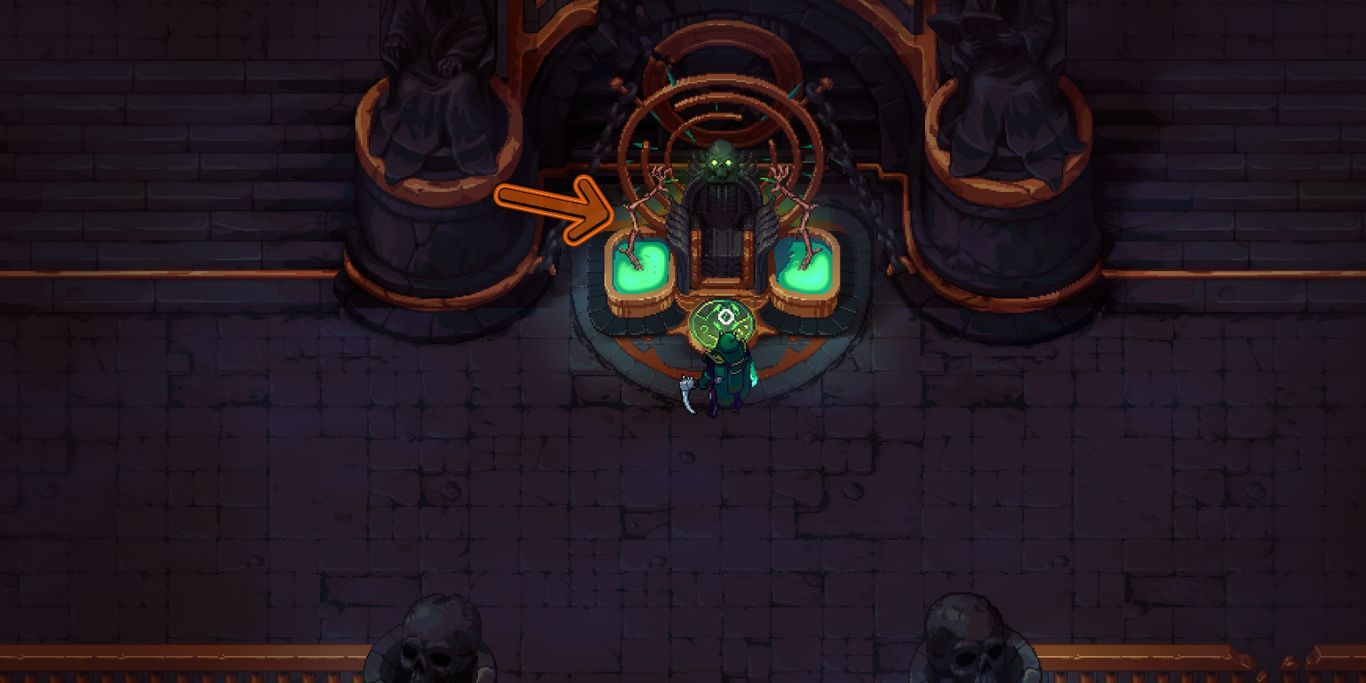 This feature won't be available after the tutorial, but you'll likely get it after you finish your first raid in The Unliving. Once you get back to Edge of Immortality after being defeated, everyone will be crowded near the throne in the middle of the area. Here, all three members who support you will tell you that they've fixed the throne.

Once the dialogue is done, you can get close to it and press the required button to get into the Ascension Throne upgrade screen. The throne will be in the middle and there'll be many circles connected in groups of two all around it.

Every ability in the Ascension Throne can be upgraded up to five times, and only three of these will be unlocked at the start. Here's what they do:

Ascension Throne upgrades are the only ones that you will have from the beginning of a raid itself. Because of this, you'll require a lot of Prima to get further grades for a certain ability. It is also the only set of upgrades that players can reset at any point. 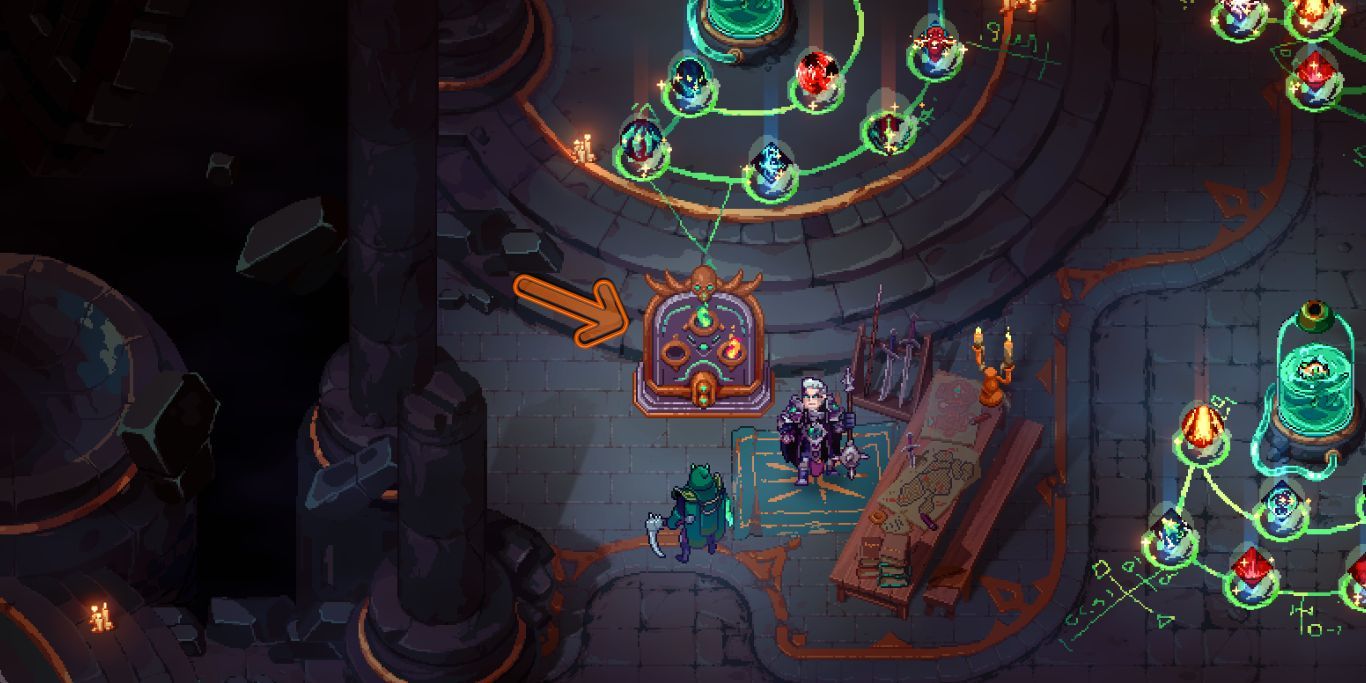 Every time you get back to the Edge of Immortality after falling in battle, The Lieutenant will have something to talk to you about. During the raid on Burial Isle, you have a chance to get a certain table that lets you upgrade your weapon and give you a new weapon depending on your progress.

A few runs after discovering this table, The Lieutenant will have the Enchanter ready for you to use. This machine can be used to get different upgrades for your hex weapon. The default weapon used by The Necromancer at the beginning of every raid is called Hexbolt. Here are all the special effects you can get for Hexbolt through the Enchanter:

Just like most of the upgrades, you won't be able to have these at the start of a raid. Instead, you can exchange one of them for ashes every time you find the weapon table during your raids.

Even though the Enchanter upgrades also cost Prima, you can't reset them whenever you want like the Ascension Throne upgrades. 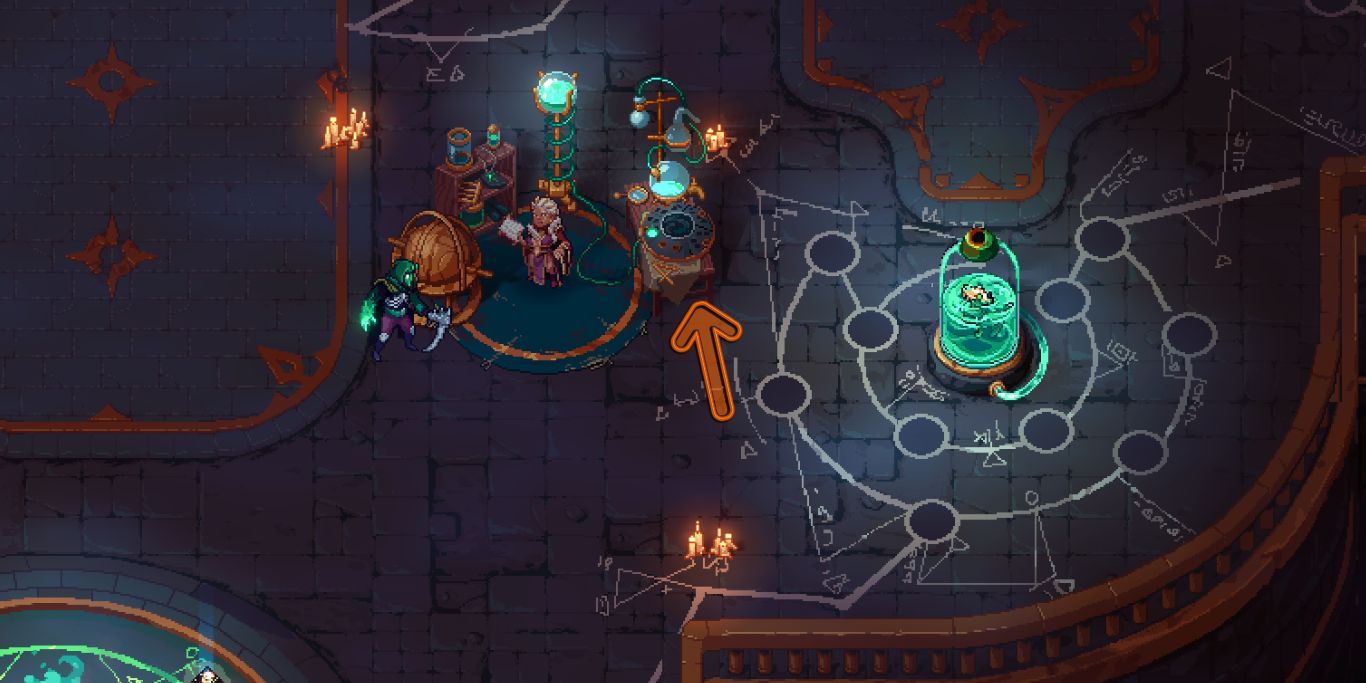 If you take all the optional paths during a raid, there's a chance for you to find a Lifespark Potion. Your health and Lifeforce are divided into different sections that can be seen at the top-right of your screen. If your health drops below a division, you will lose it permanently unless you consume a Lifespark Potion.

Other than giving you the section of your Lifespark back, the potion also refills your health and Lifeforce equivalent to one section. If you still have all your sections left, your health automatically becomes full after consuming this.

Upon interacting with enough Lifespark Potions and talking to Majra every time you can, the Lifespark Fabricator will unlock near her. This machine will allow you to get Lifespark for different enemies like Werewolf, Ancestors, and even Damned One. All of these have a different effect whenever your Lifespark goes away upon losing enough health.

One of the outstanding Lifesparks that you can get at the beginning of the game is the Lifespark of a Werewolf. Whenever you lose this Lifespark, it lets out a scream that forces all the surrounding enemies to attack each other. This can help you massively in dire situations.

This machine also requires Prima for upgrading and it can't be reset like the Ascension Throne. By default, all of your Lifesparks will have the Necromancer effect, but these can be changed whenever you consume the potion.

How To Get Arkhe And Prima 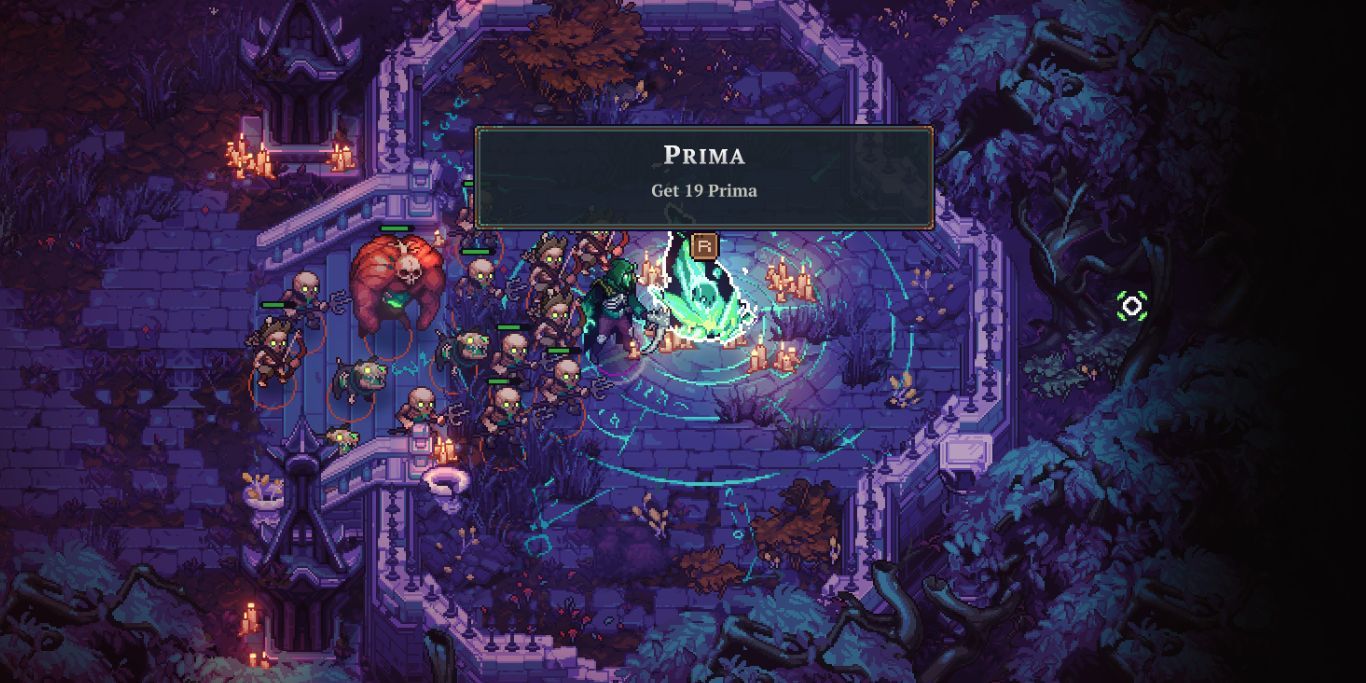 Here's how you can acquire Arkhe and Prima during your raids: