Upstart Archon Studio is ready to reveal its newest product, Wolfenstein The Board Game, based on the video games by Bethesda Softworks and Machinegames. Heading to Kickstarter later this year and retail store shelves later on, the base game comes with more than 50 plastic miniatures and includes 10 missions with plenty of replayability. The tabletop game also promises fans the ultimate battle, pitting them against the hulking Mecha-Hitler first seen in the original Wolfenstein 3D way back in the early 1990s.

What separates Wolfenstein The Board Game from others in the boutique, hobby board gaming space is the quality of the miniatures. Archon tells Polygon that its in-house sculptors and product engineers have worked hard to create pieces that are not only great for painting, but also well-designed functional objects. Each one will be manufactured on site at Archon’s massive new production line based in Poland, which is capable of pushing out more than 63,000 miniatures in a single day. 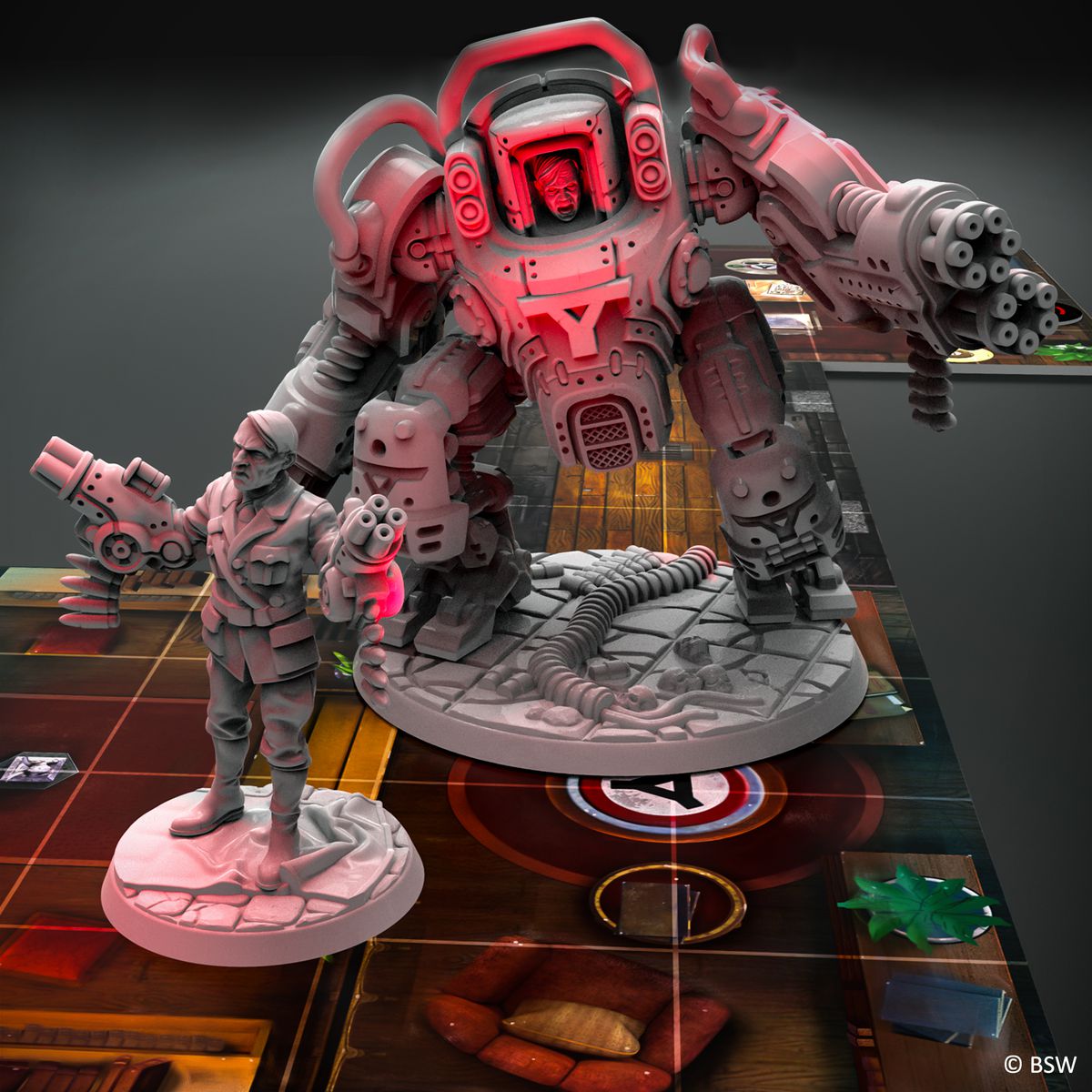 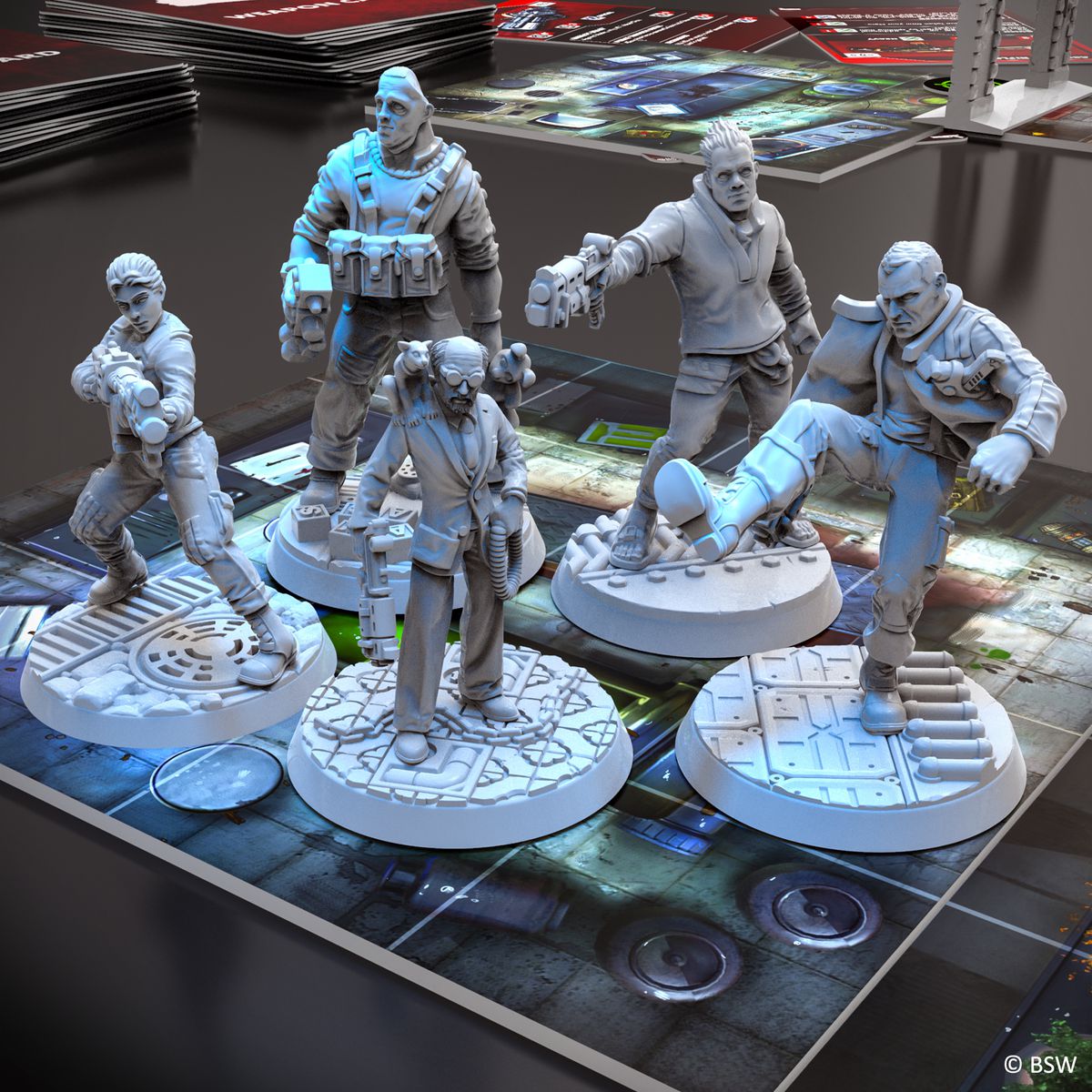 Members of the Kreisau Circle in miniature form.

“We are second only to Games Workshop,” said campaign and project manager Michal Hartlinski in an interview with Polygon. “We are in fact the only company, apart from Games Workshop, that’s capable of creating miniatures for board games and war games in plastic in Europe. No one else can do this.”

The results of Archon’s manufacturing process were on display last year at Gen Con in Indianapolis. That’s where towering, multi-level structures from Archon’s Dungeons and Lasers line were shown in public, attracting a lot of attention across the hall from similar pre-painted offerings from folks like Dwarven Forge. As an experienced hobbyist, I can tell you that the quality is top notch, with minimal cleanup needed to get pieces ready for priming and plenty of depth to the details for base coating, detail work, and washes. 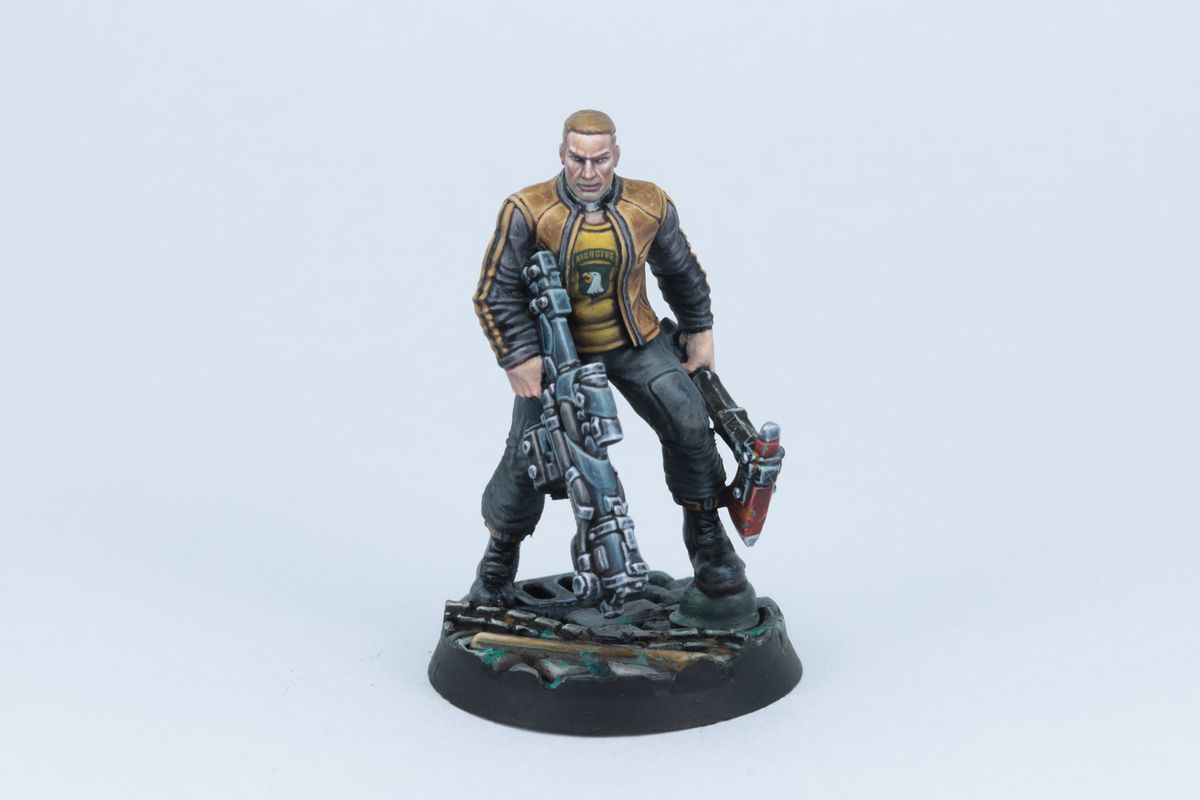 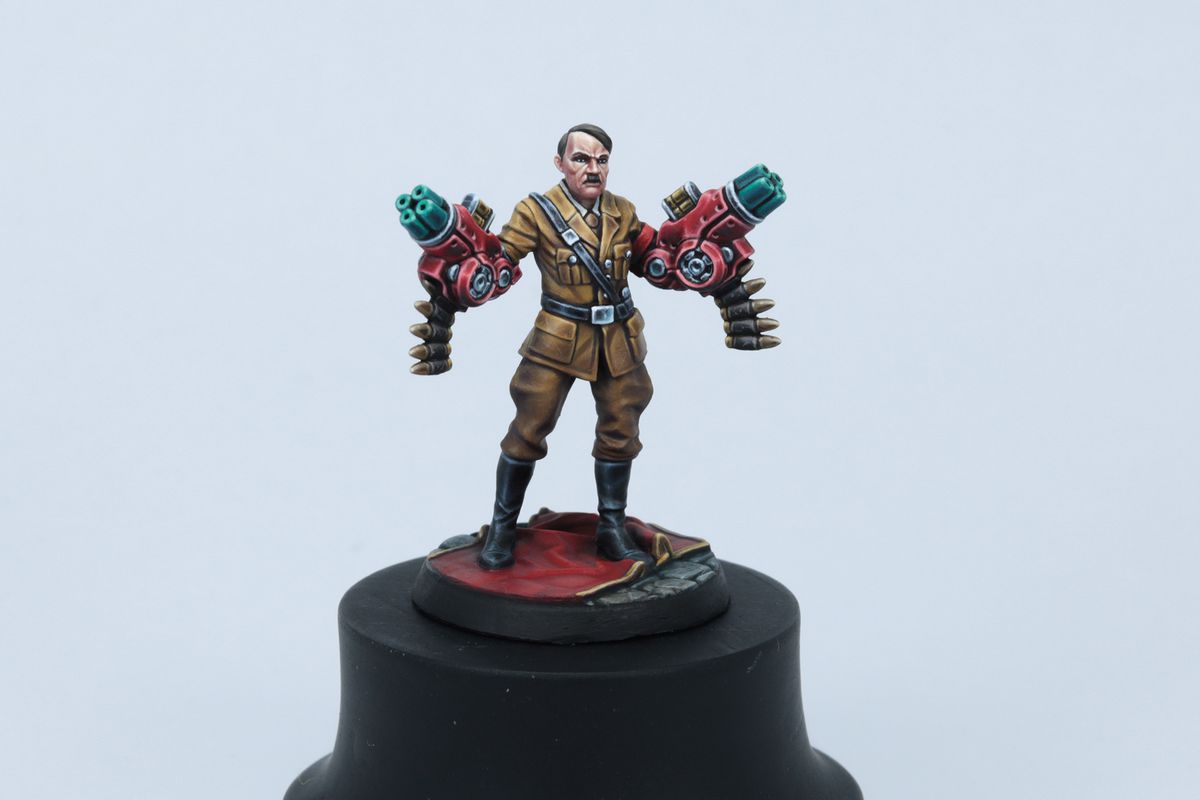 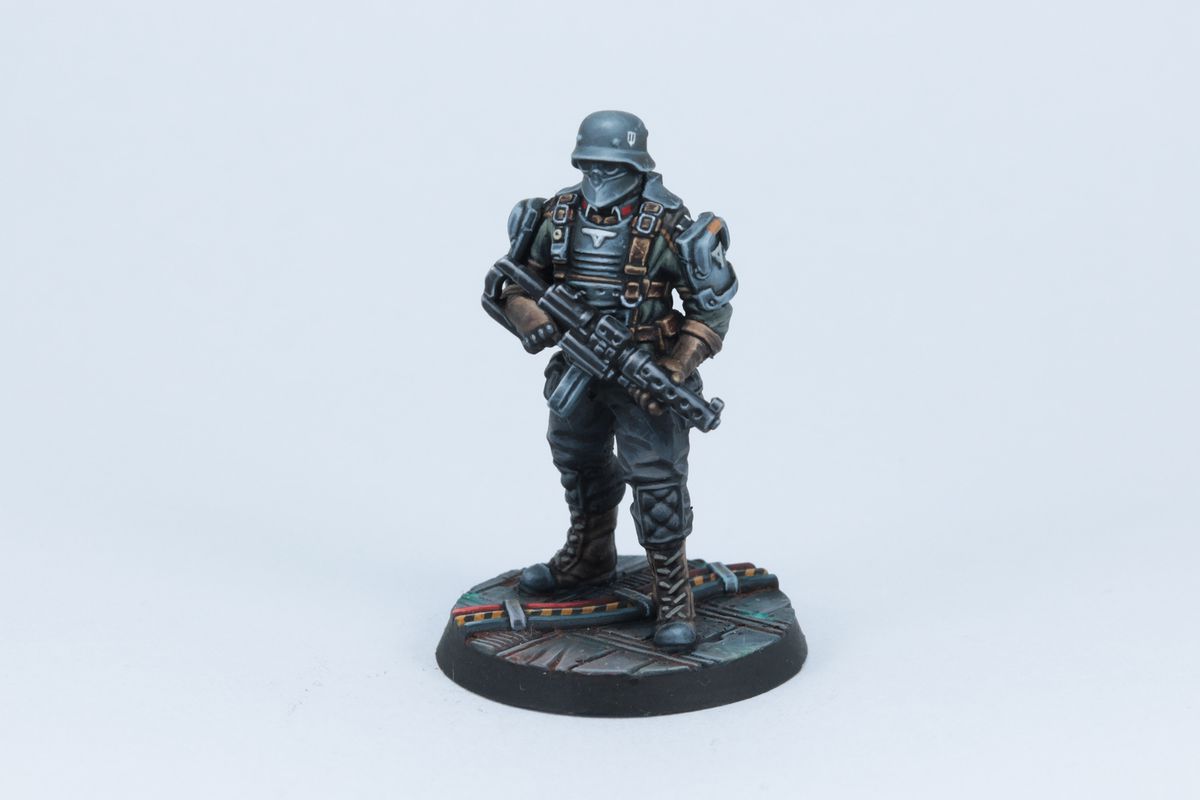 Archon has put a lot of time into recreating the iconic characters from the beloved first-person shooters. Early renders are quite promising, and include main characters Bombate, Max Hass, Klaus Kreutz, Anya Oliwa, and Set Roth in addition to Blazkowicz himself. Each one has a special ability, and only by working together can players hope to overcome the opposition.

The game runs on an action point system, not unlike Firaxis’ XCOM. Players use their actions to move, fight, and interact with the environment one at a time. Then the Nazi units on the map react, relying on a simple, static AI system. Maps are tile-based, with plastic dividers with removable doors that separate rooms. Sound plays an important role, with everything the player does generating noise throughout the game.

“We start with simple infiltration in round one,” Hartlinski said, “and every mission is about getting deeper and deeper into the castle, finding more information about the mad scientists roaming around there, doing their experiments, and finally getting information where the potential Fuhrer is located.”

Players will encounter several mini-bosses on the way to the final confrontation against Mecha-Hitler. For those, Archon has created miniatures of General Oscar von Grim and Professor Solomon Bevli. There will also be side missions for players to contend with, which will have multiple outcomes and be generated randomly for each playthrough. 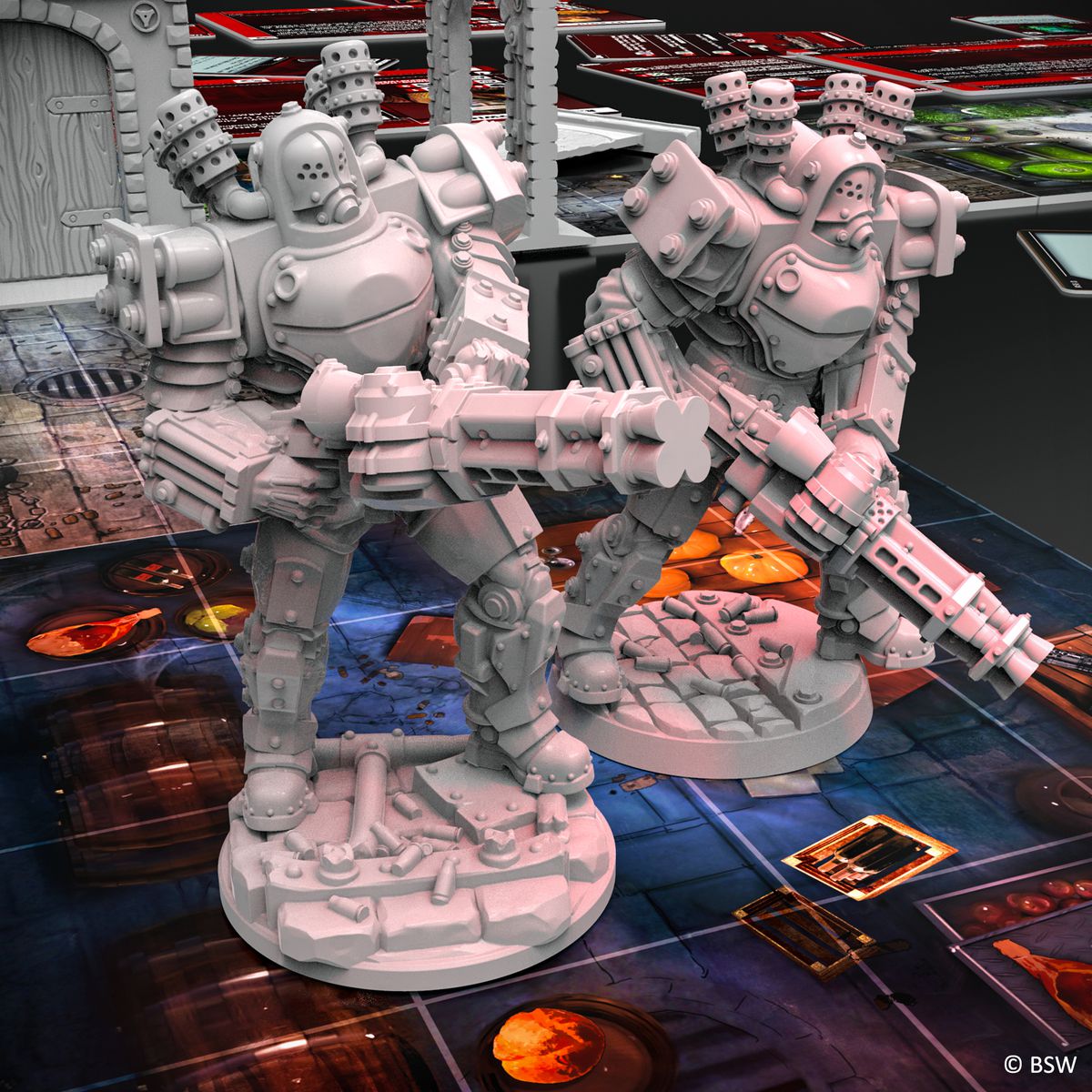 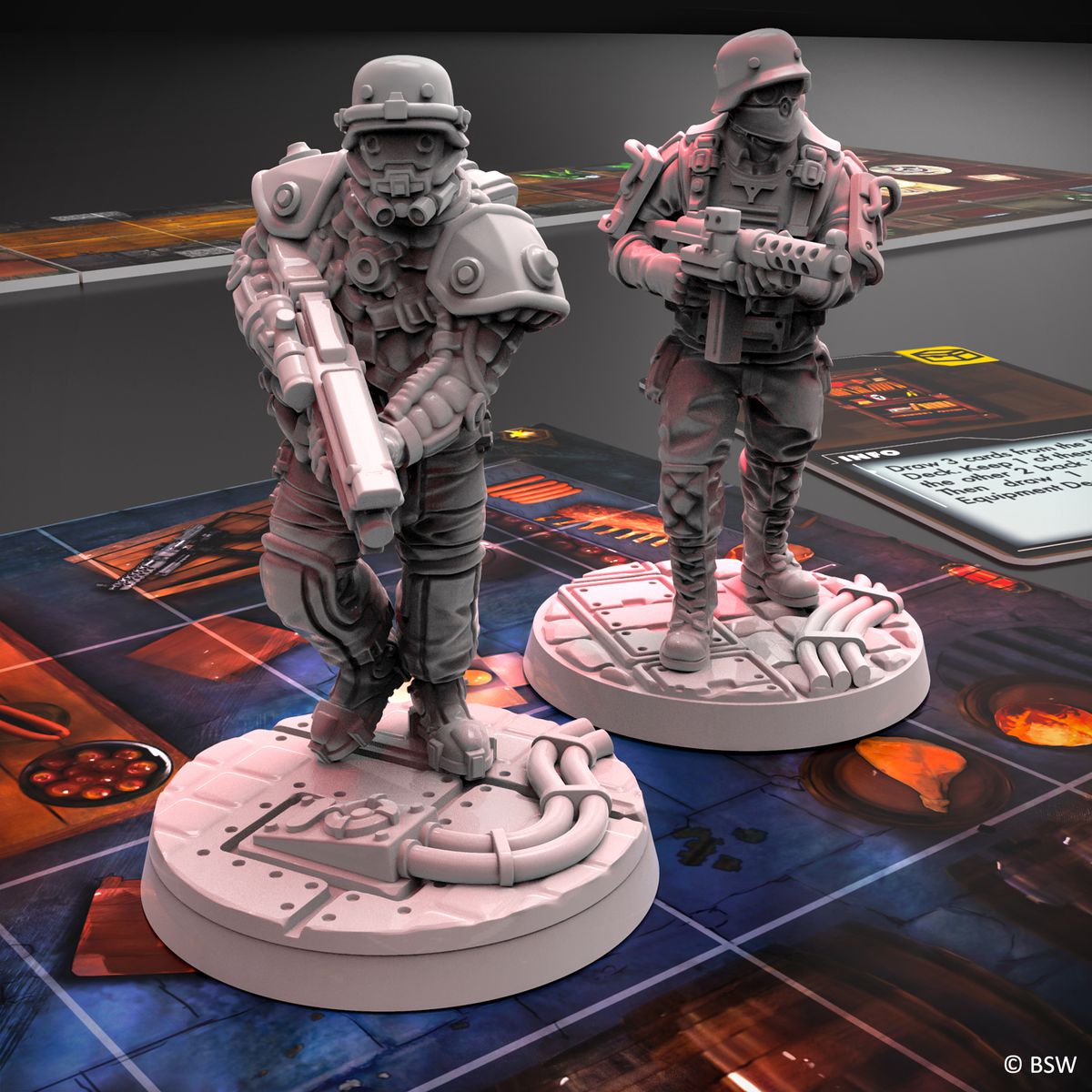 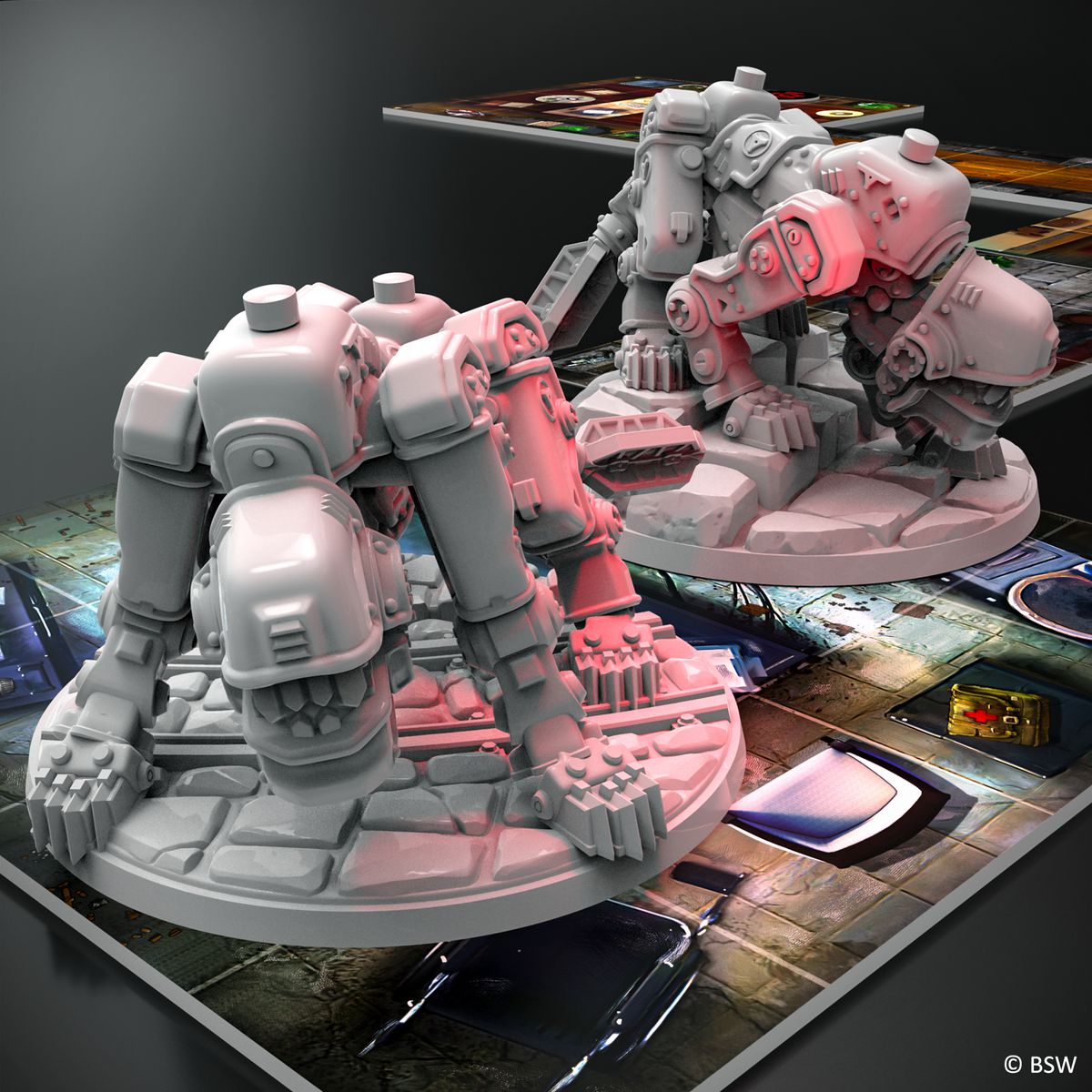 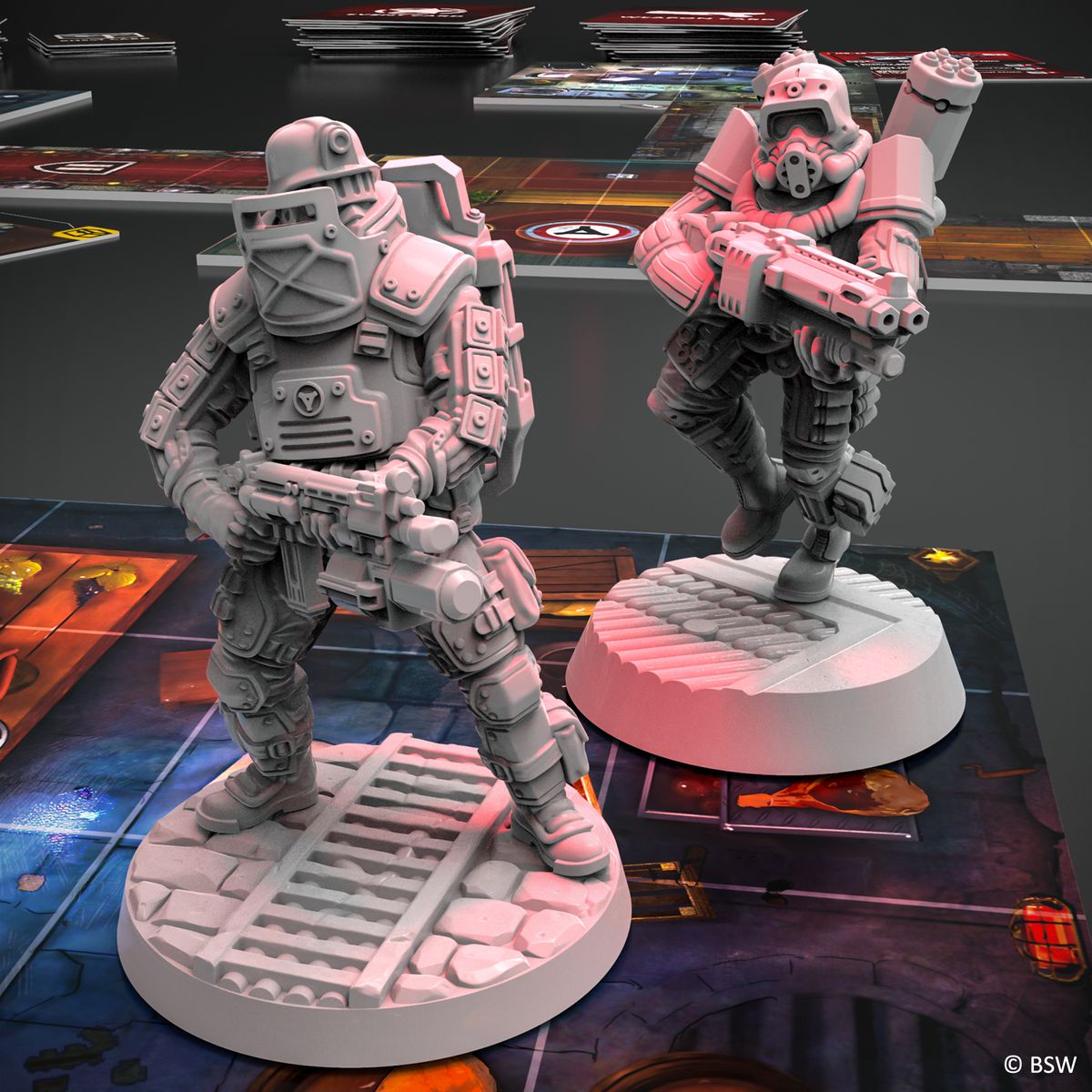 Kills will generate “glory points,” which can be used to power special skills on some characters. So lining allied units up to kill enemies in the right order, whittling them down to their final few hit points in a coordinated way, will be key to your success. There will also be loot, in the form of weapons and ammunition, that will allow players to perform special moves in the mid- to late-game of every mission.

“The best way to get loot in Wolfenstein is to kill everyone,” Hartlinski said. “It’s as simple as that. Enemies are walking warehouses with ammunition, items, and weapons. The more difficult the enemy that has been eliminated, the more loot you get.”

Missions are time-limited to a number of rounds, so players need to find a balance between moving quickly and moving quietly to get the job done before time runs out. Move too fast and the Nazis will raise the alarm; go too slow and the mission timer will run out, triggering a failure.

Characters are controlled from a sideboard. Each one enters a mission with only their starting equipment and skills. A progression system was considered early on, which would have had players gain additional skills and equipment across multiple missions. Archon made the decision to dump the mechanic during development, opting for a more pick-up-and play approach. Gameplay will be more tactical with an emphasis on cinematic gunplay. 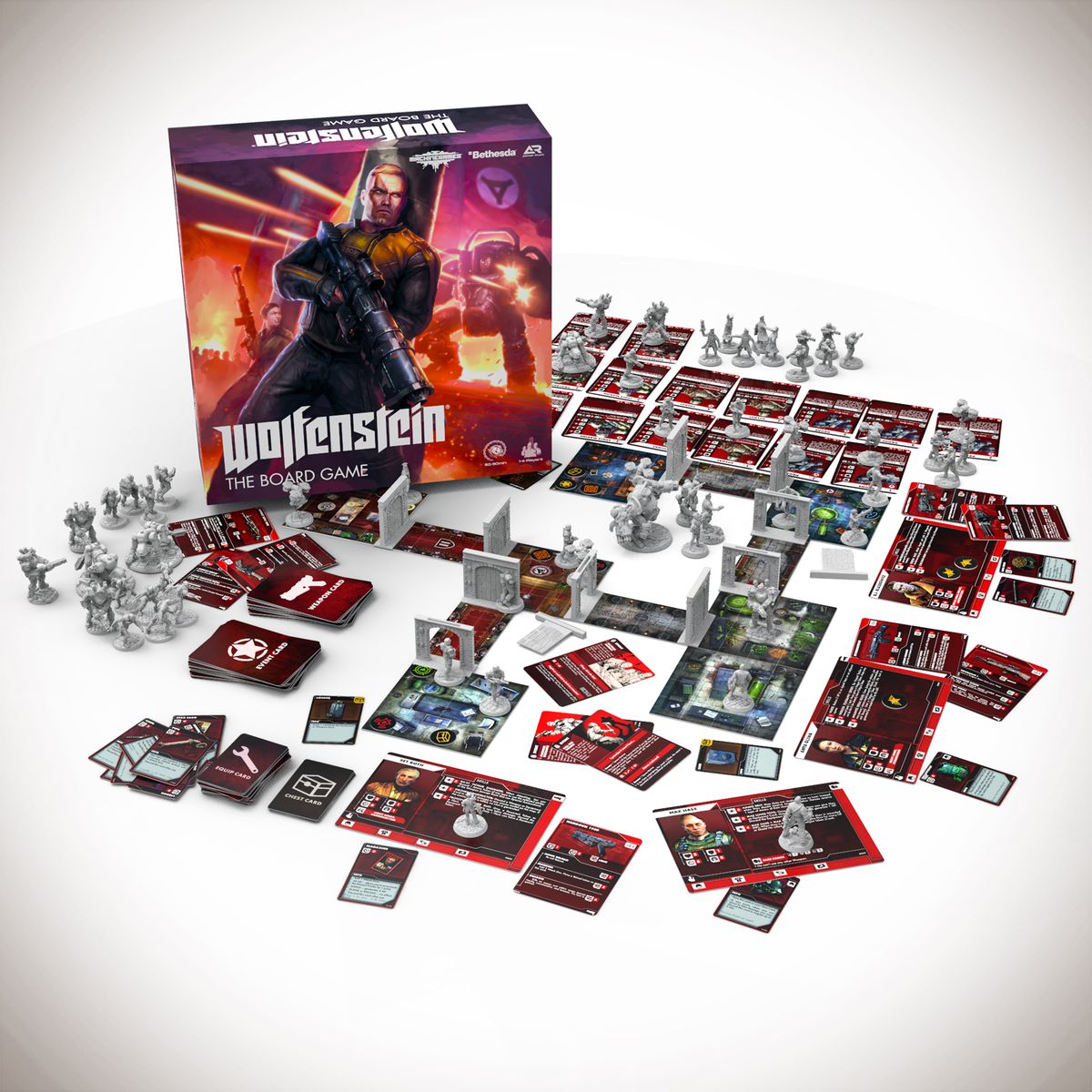 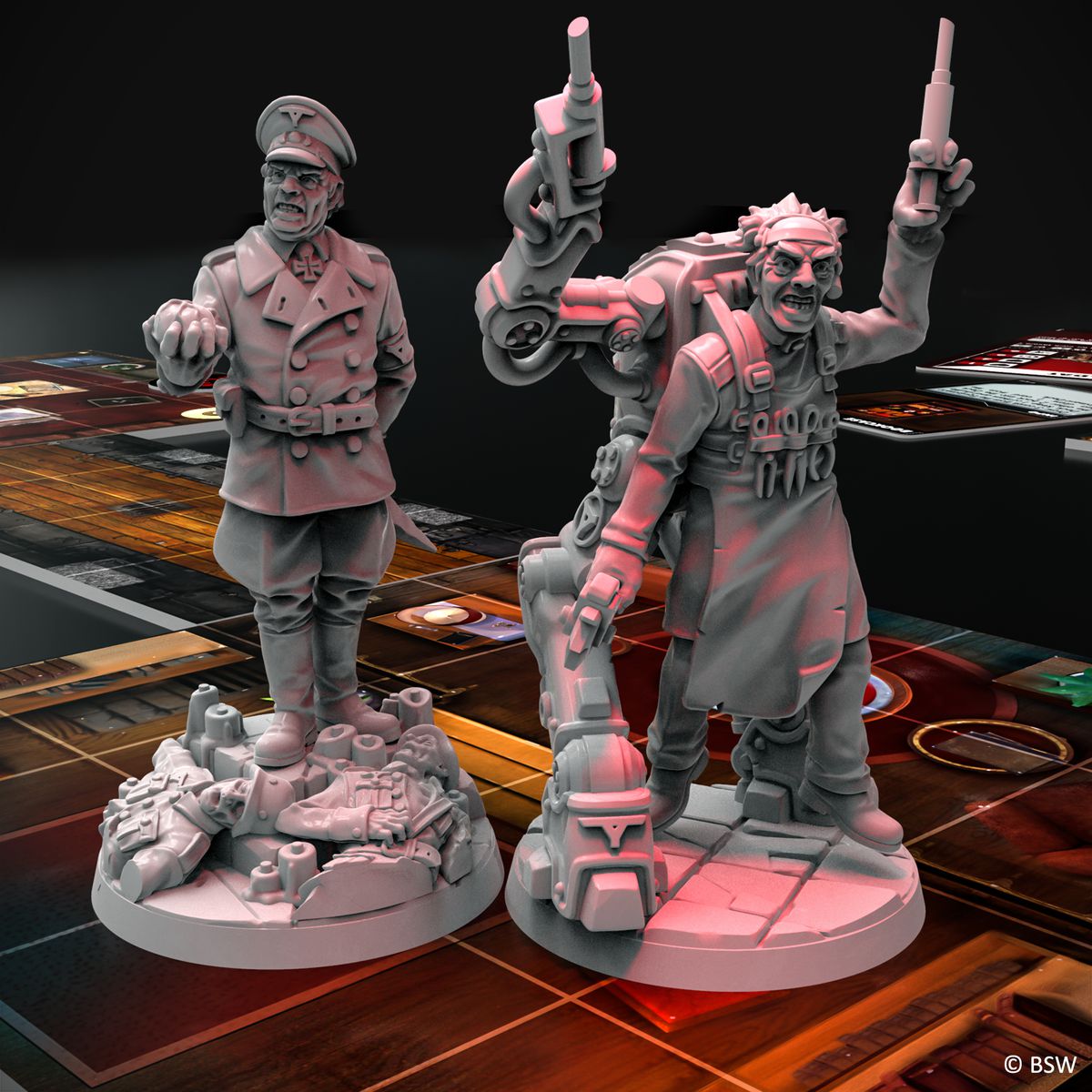 “It was a tough decision” to drop the game’s RPG-style progressions mechanics, Hartlinski said. “During the game design phase we have decided to make every mission play as a separate episode.”

Archon is excited to make the leap into licensed gaming, and to show the world the quality of its manufacturing facility. But, being the team behind Wolfenstein The Board Game has special meaning for Hartlinksi and the other Poles working on the project.

“B.J. Blazkowicz is a guy from Poland fighting against the Nazis,” Hartlinski explained. “The first company ever that’s going to make a board game about Wolfenstein is from Poland. We call it ‘the laughter of history’ here in the office.”

“Sometimes we feel a little bit weird when we are, you know, 3D printing Hitler as a game piece,” he continued. “But, at the same time, it’s one of the most popular video games in Poland from the ’90s. So, it’s like a childhood dream you’re faced with.”

The Wolfenstein The Board Game crowdfunding campaign will also include a bunch of potential add-ons, including content based on Wolfenstein: The Old Blood. Expect additional enemies, missions, and heroes that will be compatible with the base game. Look for more information on the game’s official website, which includes the option to sign up for a newsletter and be alerted when the campaign goes live in the next few months.