Few things are quite as satisfying as landing a headshot on an enemy through the scope of a sniper. While Tiny Tina's Wonderlands might not be the most tactical of first-person shooters, the game did not skimp out when it came to Legendary Sniper Guns. From bouncing sawblades to orbs of electrical energy, these snipers bring all the chaos you have come to know and love about Tiny Tina's Wonderlands.

As always, if you are having trouble looting any Legendary weapons, you might need to take a break from the grind to collect some more Lucky Dice. If your Loot Luck is already maxed out, here is every Legendary Sniper Gun you can find in the game. 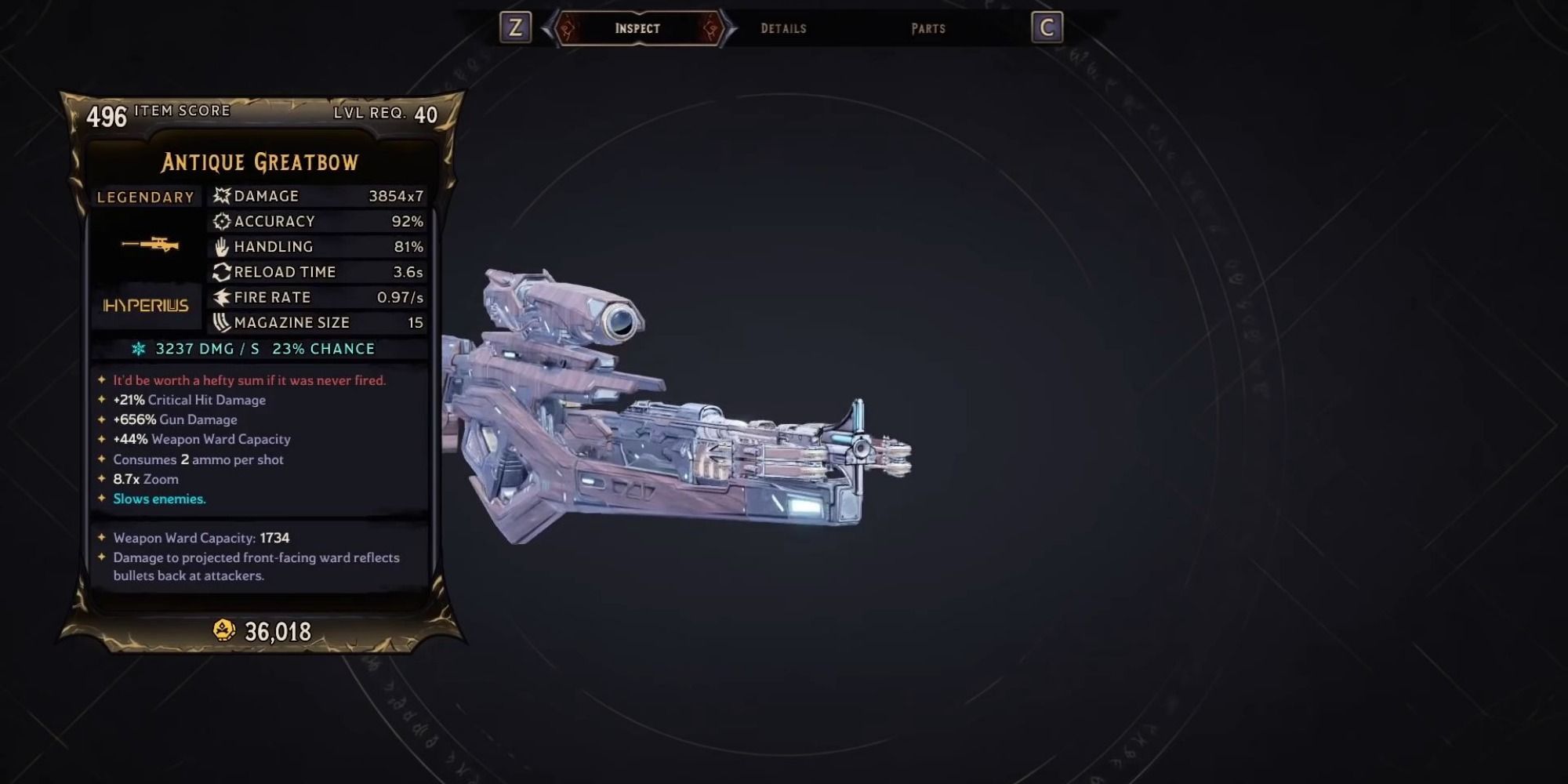 If you did not read the red text for the Antique Greatbow, you might be in for a rude surprise. Upon looting it, it will read, "It'd be worth a hefty sum if it was never fired." Well, if you try out your new swag, you can literally hear the gun break upon firing. If you look at the sniper in your inventory now, it has transformed into the "Used Antique Greatbow". Not only has its selling price decreased but so has its damage and other stats. What a pity.

With the practical joke aside, the Used Antique Sniper is not a terrible Legendary. It deals Lightning Damage effective against Wards, and it also increases your Ward capacity. Plus, any damage to the front of your ward reflects those bullets back at enemies. It has the greatest chance of being dropped by the boss Thorne Shadow in the dungeon in the Overworld that contains a Crazed Earl Shrine Piece. 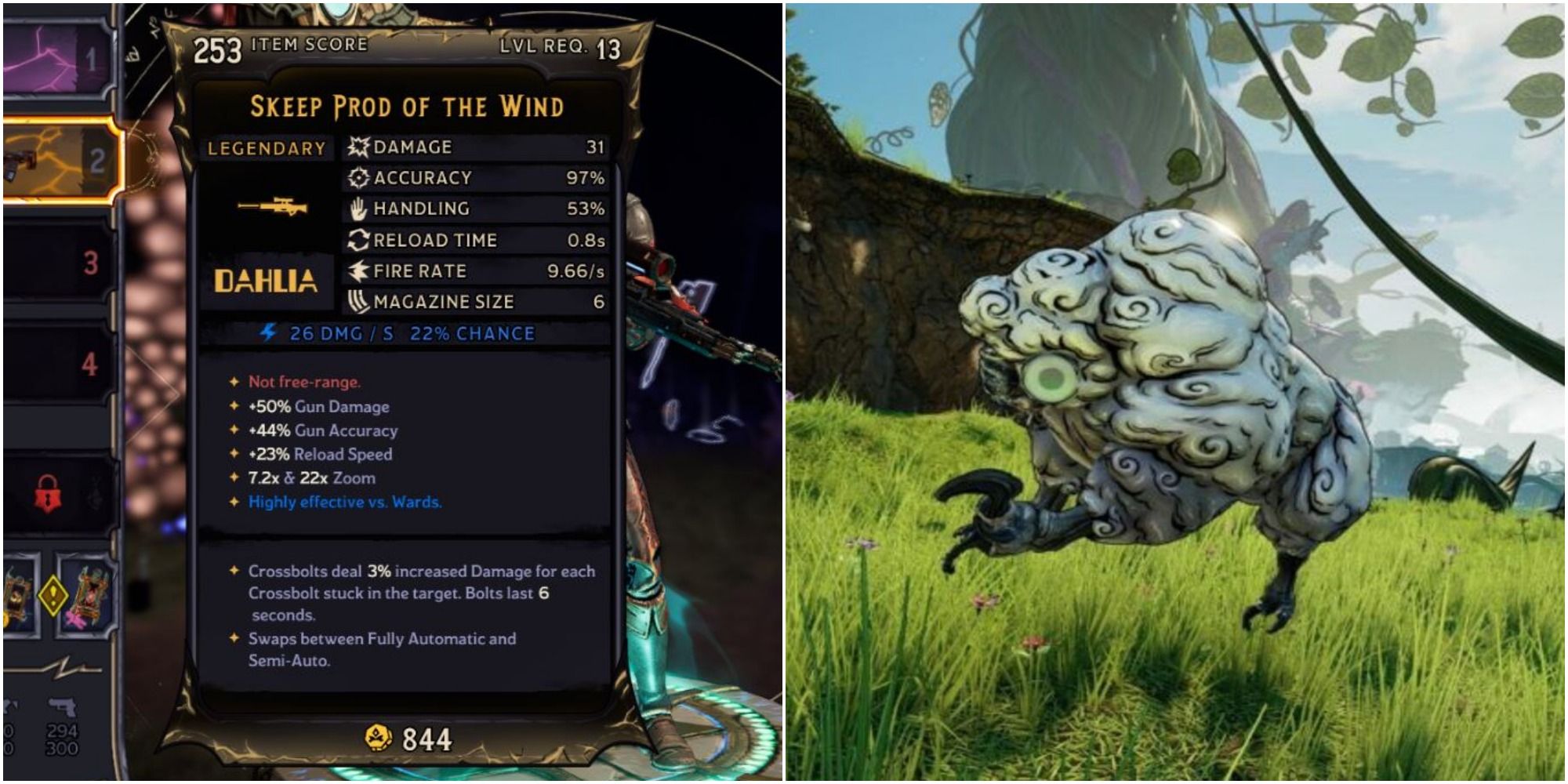 Poor Skeeps. Well, chances are you will not be using this Legendary Sniper on cattle. This weapon is extremely effective against Warded enemies, and any Crossbolts that get stuck in your foes will amp up your increased damage.

If you ever feel a little impatient reloading your Sniper Rifle one bullet at a time, the Skeep Prod can also be switched into Fully Automatic mode. This sniper is a world drop, meaning it can drop from any old mob, and there is no boss to farm to increase your chances. 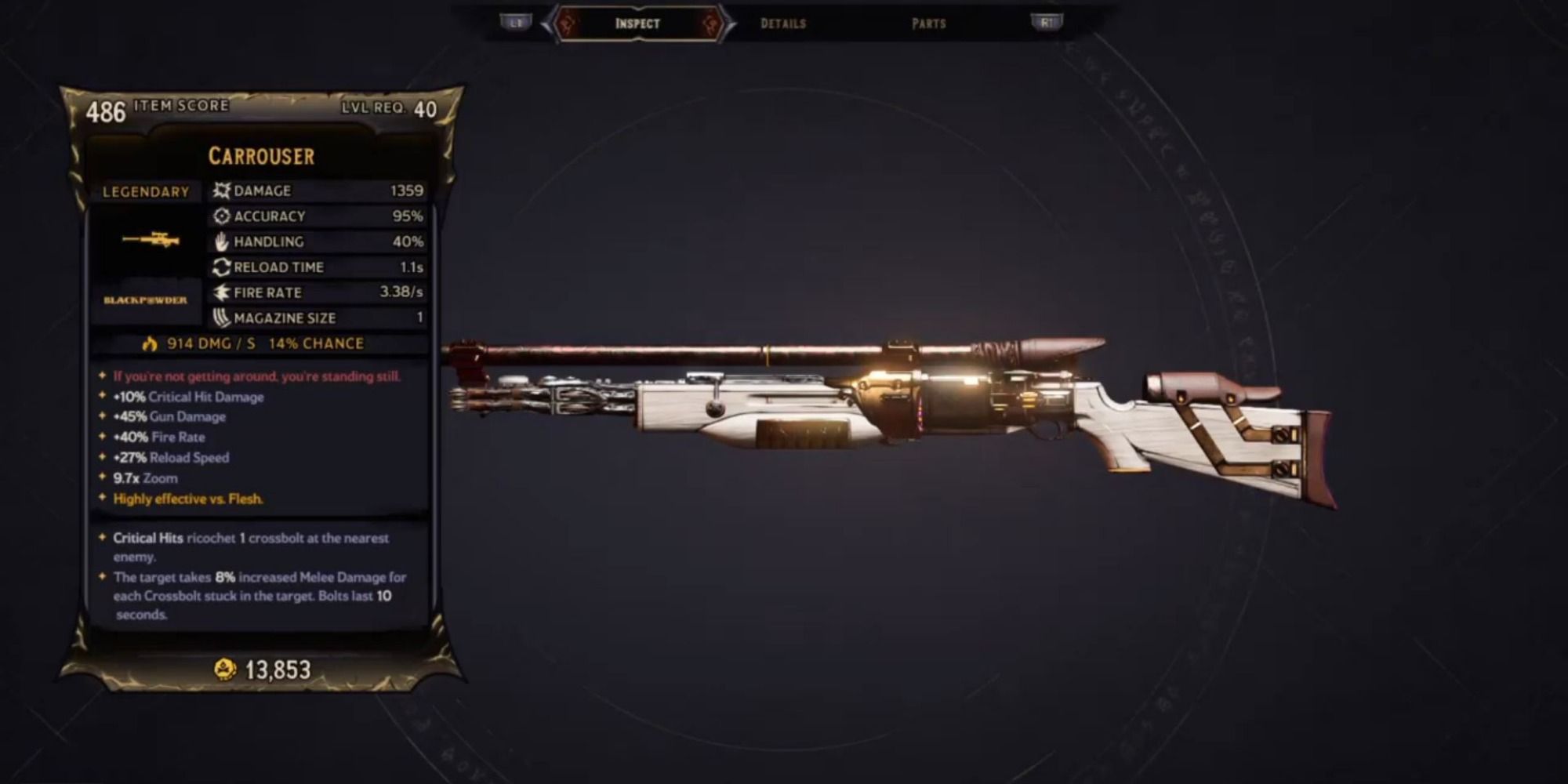 The great thing about the Carrouser is that, should you miss your headshot, this Legendary Sniper has Fire Damage that will trigger some ticking damage on top of your piddly body shot. It does not hurt that crossbolts fired from the Carrouser also have a chance of ricocheting and hitting other nearby targets.

While the Carrouser is a world drop, the best place to farm it is from mini-bosses in the Chaos Chamber. 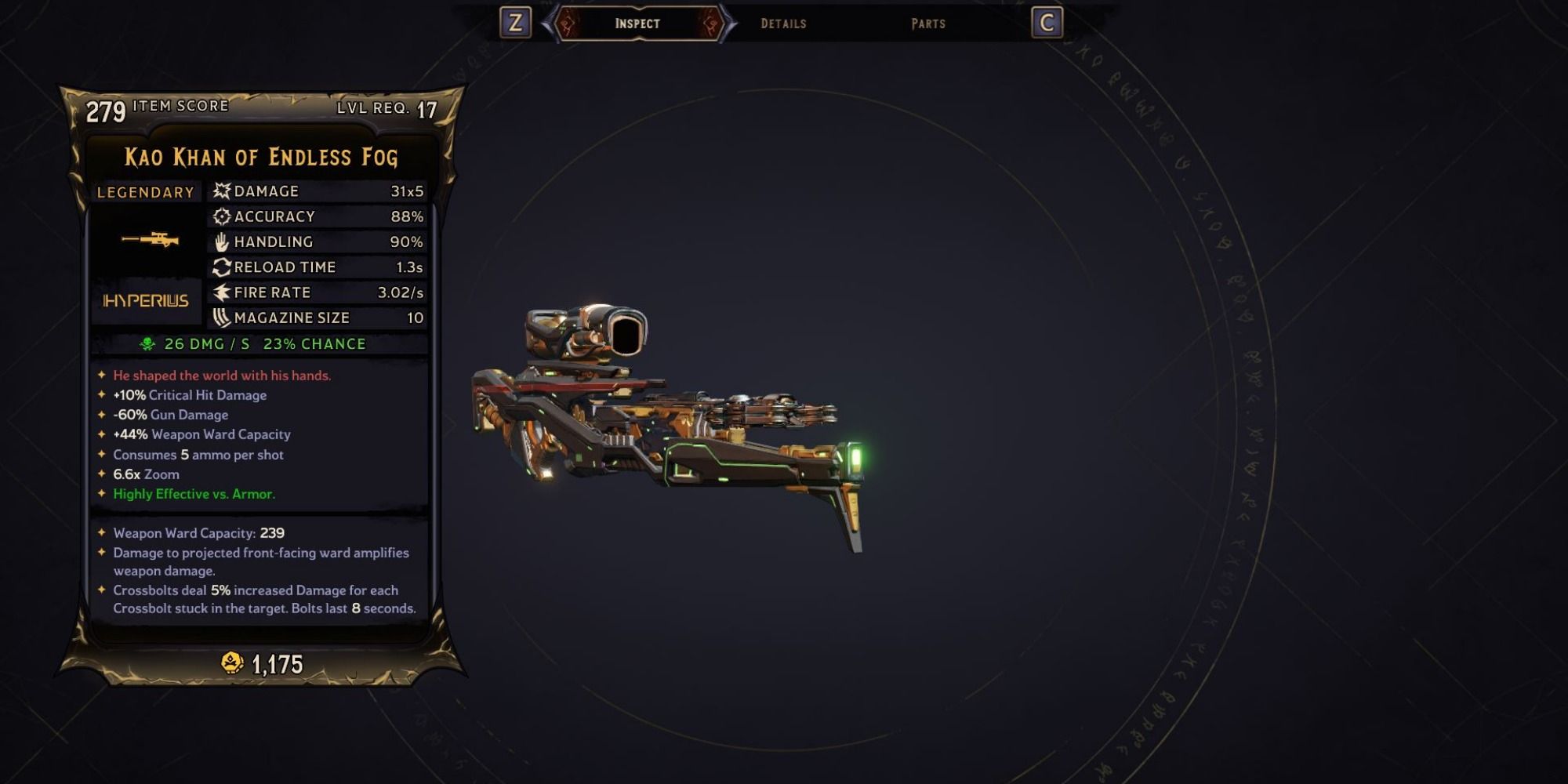 The addition of extra Ward capacity is not to be underestimated when it comes to sniper rifles. Not only does the Kao Khan deal poison damage to enemies, it gives you that extra beefiness to your armor while amplifying your weapon damage for every lick of damage your Ward takes. This sniper is a world drop, but to increase your chances try to loot it from any mini-boss in the Chaos Chamber. 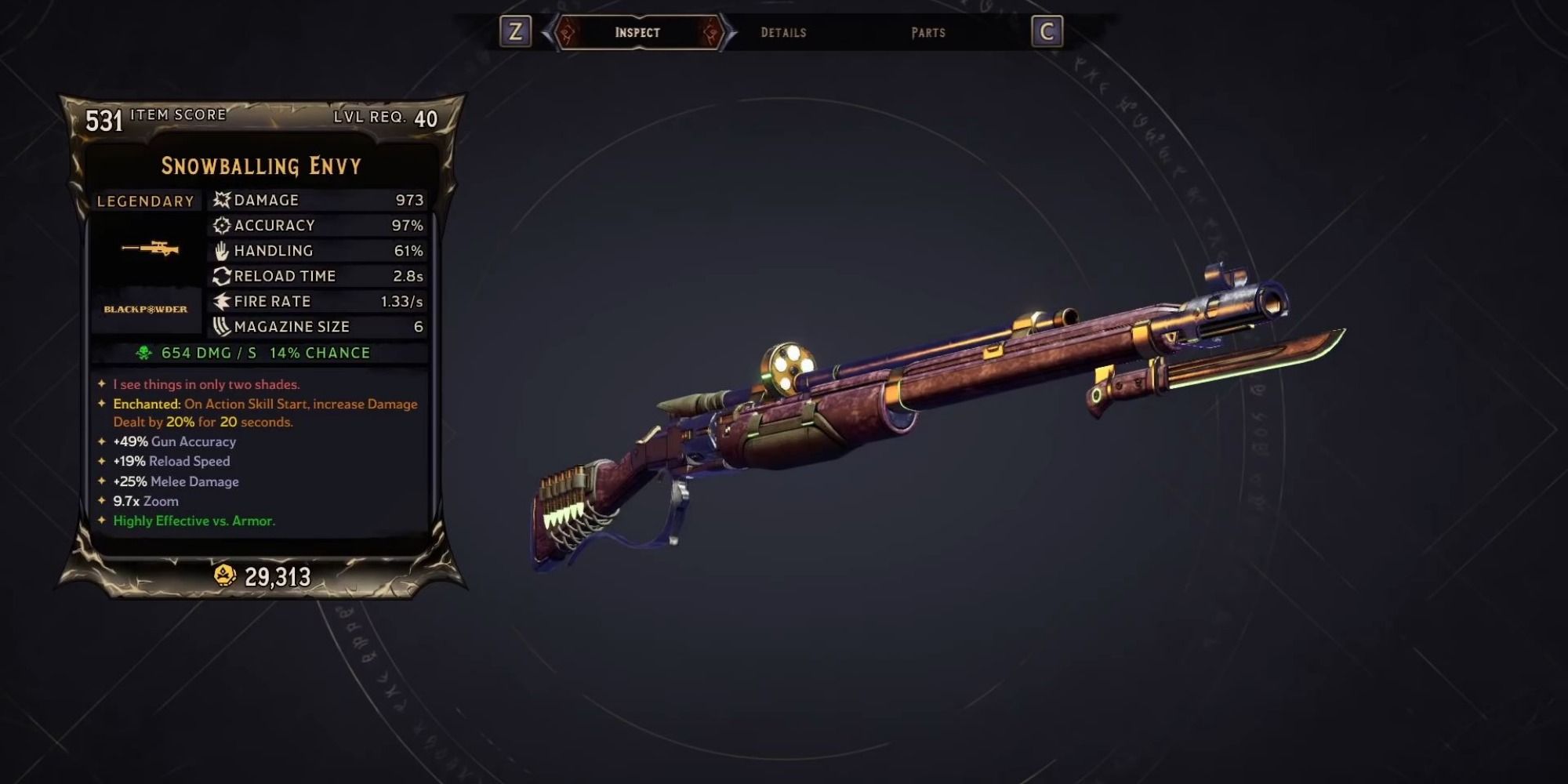 On pick up, the Envy Sniper Rifle might not look like much. However, this fast-shooting Legendary deals not only Poison damage but Dark Energy damage as well. Landing a crit on a target will create a puddle of poison beneath their feet, dealing extra ticking damage. Also, if another enemy is close enough, that bullet can ricochet and strike them as well, this time generating a Dark Energy puddle.

The best way to farm the Envy is from the King Q'urub mini-boss at the Ancient Obelisk in Drowned Abyss. 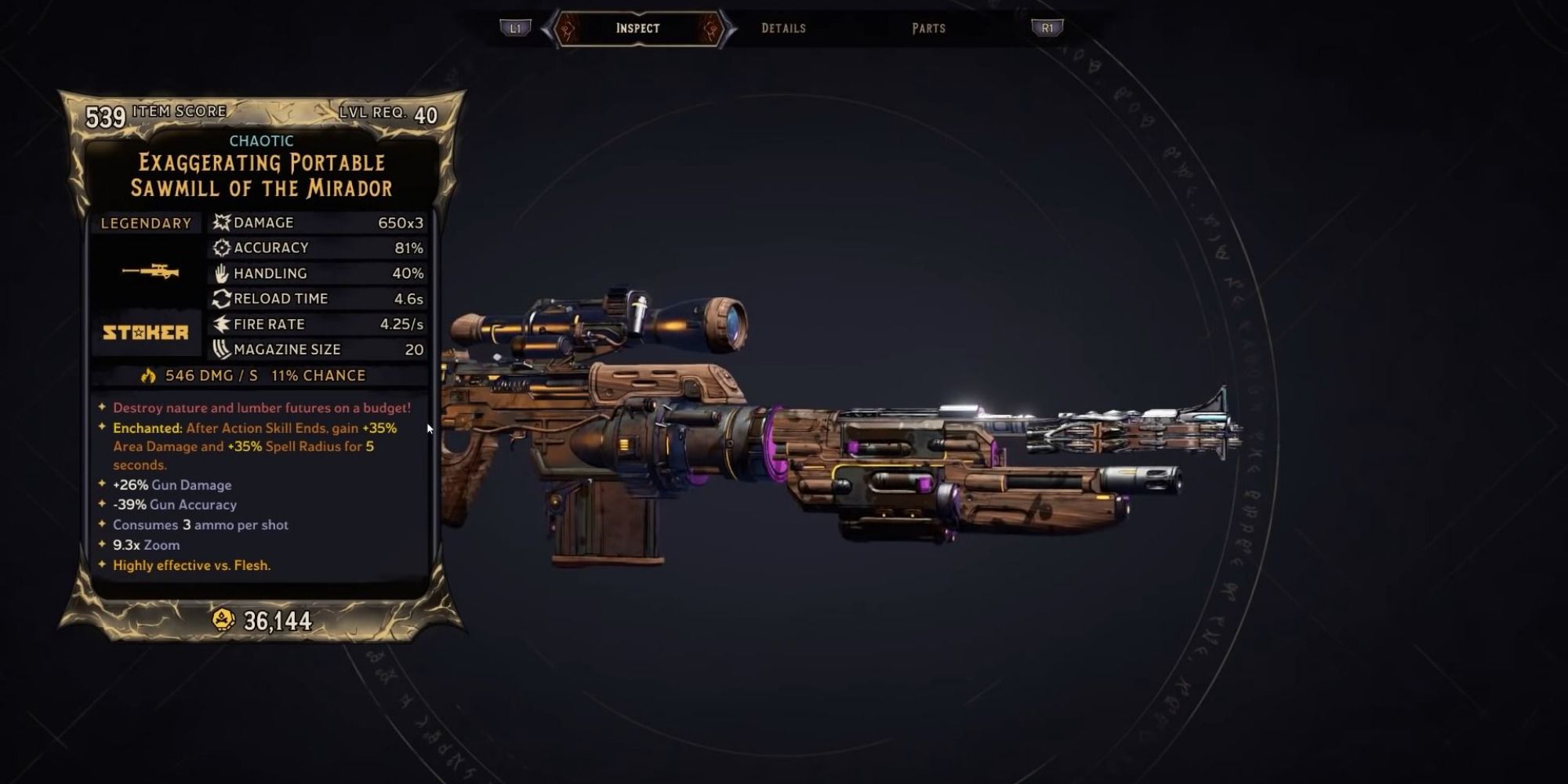 No, it really does not get any better than a sniper that shoots saw blades. The Legendary Portable Sawmill makes up for its lack in Gun Accuracy by firing off a round of bouncy saw blades that can ricochet off nearby surfaces to lodge into enemies and do more Fire Damage.

This bad boy is not a world drop, so if you want to get in on the lumber sawing game, you will need to farm the Chaos Chamber for this loot. 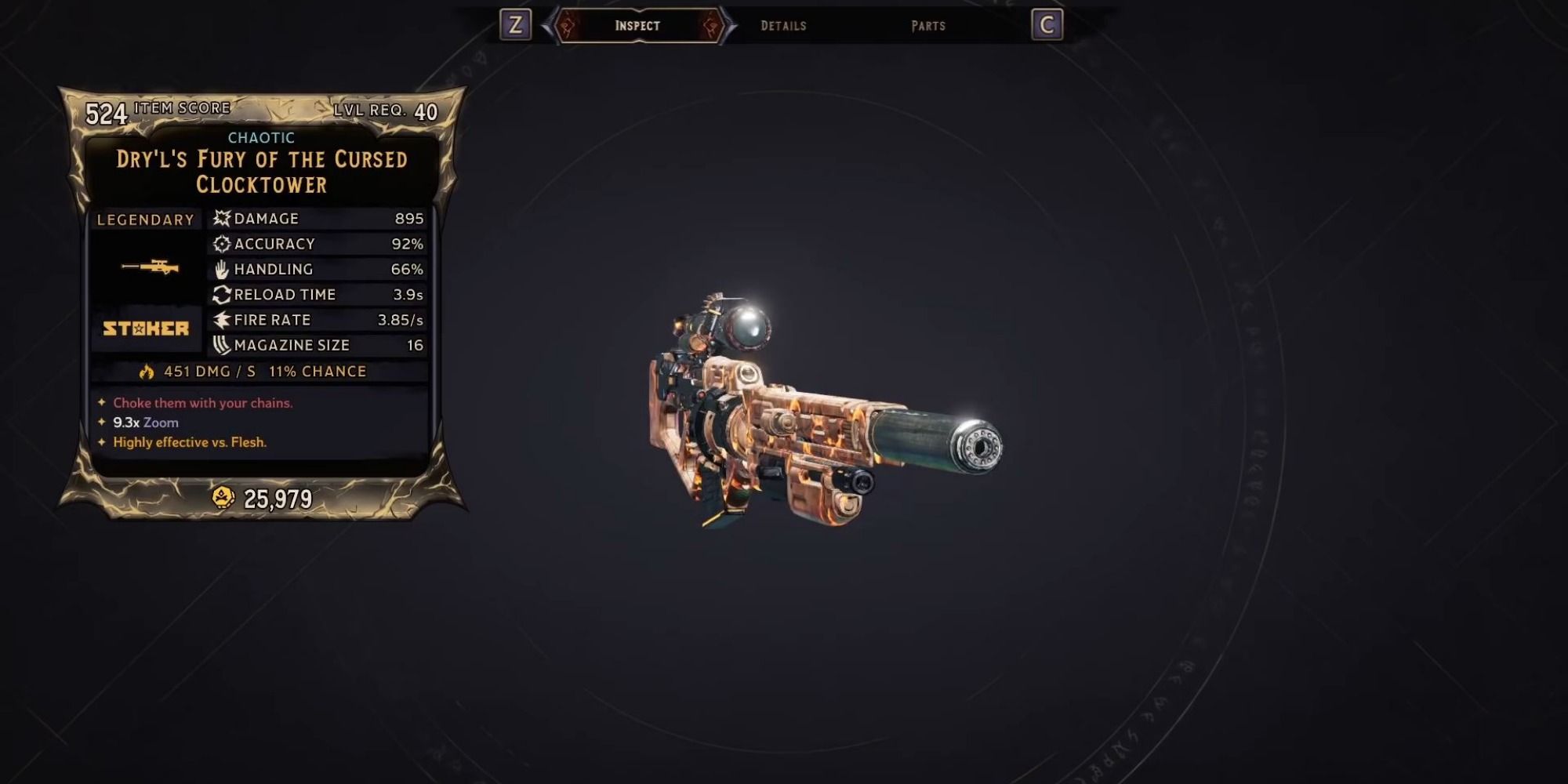 This unsuspecting little Sniper has a massive surprise in store. We already love a Sniper with some residual Fire Damage. But this guy also has a secondary fire mode that pops off a big orb of lightning energy. If you shoot this orb, it will explode in a small radius, shocking nearby foes. You can actually shoot the lightning orb up to five times for the same effect, even chaining damage.

As you might have guessed, while Dry'l's Fury is a world drop, you are going to want to fight the boss Dry'l in Godswell for the best odds of picking up this puppy.