The Immortal Empires map for Total War: Warhammer 3 is the trilogies' crowning glory, and is the culmination of three separate titles. The massive combined map encompasses nearly all the known Warhammer Fantasy World, and there are a plethora of races, factions, and lords to choose from. However, with so much replayability and choice comes problems, as the map's size can be daunting, especially for newer players. It can be difficult to know who to play or where to go, with so much room for expansion and conquest.

This guide will serve to provide you with gameplay advice on how best to tackle the various challenges Immortal Empires will present. Whether it be successfully completing your first campaign, or adjusting from previous titles or maps, these fundamentals will prove useful in improving your success.

Focus on your Victory Objectives 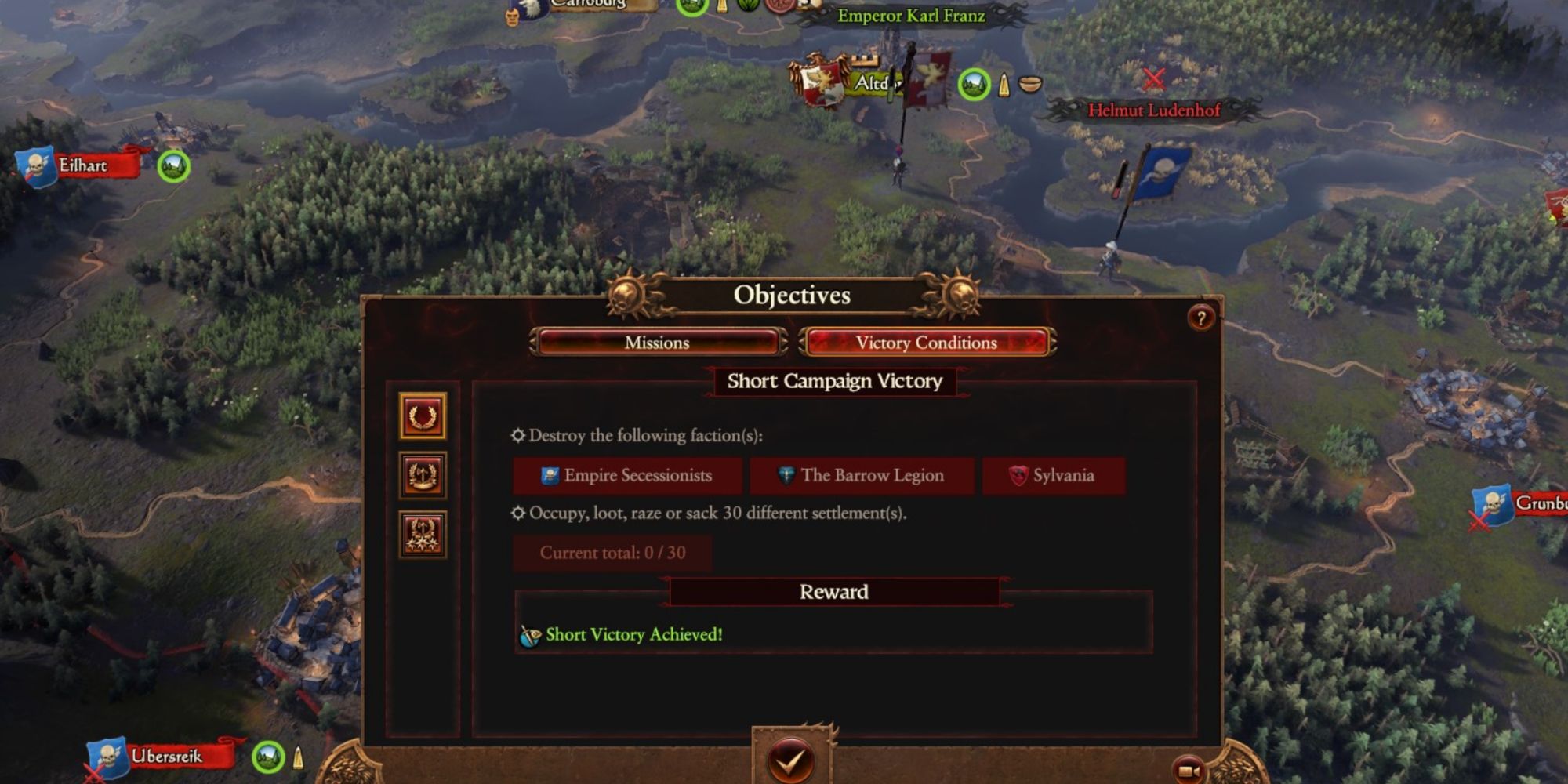 The key to winning any game of Immortal Empires, Victory Objectives are your guidelines for how to tackle your campaign. Whether it be to kill certain factions, conquer certain settlements, or own a specified number of provinces, you should tailor your gameplay towards meeting these goals.

For example, certain factions that you are required to vanquish should be treated as hostile, and entering into diplomatic alliances with them can cause you to struggle to destroy them down the line. In Immortal Empires large factions are generally more adept in destroying smaller and weaker enemies, so you may even find yourself completing certain objectives without any input, although this will vary from campaign to campaign.

In Immortal Empires, your Victory Objectives will be divided into four separate tiers:

Your Short Campaign Victory will be focused upon defeating a small number of factions, often situated close to you, a specific settlement or two, and 30 random settlements in total. This is targeted towards a fairly short playtime, and can be achieved extremely quickly with certain factions. Upon completion, you will receive a small, permanent reward to aid you in an extended campaign.

The Long Campaign Victory will take much more time to complete, and involves capturing 75 settlements, including those in specific regions of the Immortal Empires map. It may also include defeating a large faction, which will take longer to travel to and destroy, but your reward will be greater than that of the Short Campaign.

Domination Campaign Victory simply involves capturing 272 settlements. This will take a significant amount of time with any faction, as it results in you owning a very large portion of the map. You should look to complete both the Short and Long Campaigns on your way to accomplishing this.

FInally, the Ultimate Campaign Victory will differ depending on which End Game Scenario has been enabled in your game settings. For example, the Da Biggest Waaagh! will ask you to destroy every Greenskin faction on the map, and these objectives can vary from game to game. This can sometimes take longer than a Domination Campaign, depending on what settings you have chosen beforehand.

If you become stuck figuring out what to do next, working towards completing these different Victory Objectives will have you on the right track.

While the Objectives Tab also contains Mission Objectives, these are much more generic and can be deviated from, if they are not conducive to your campaign. 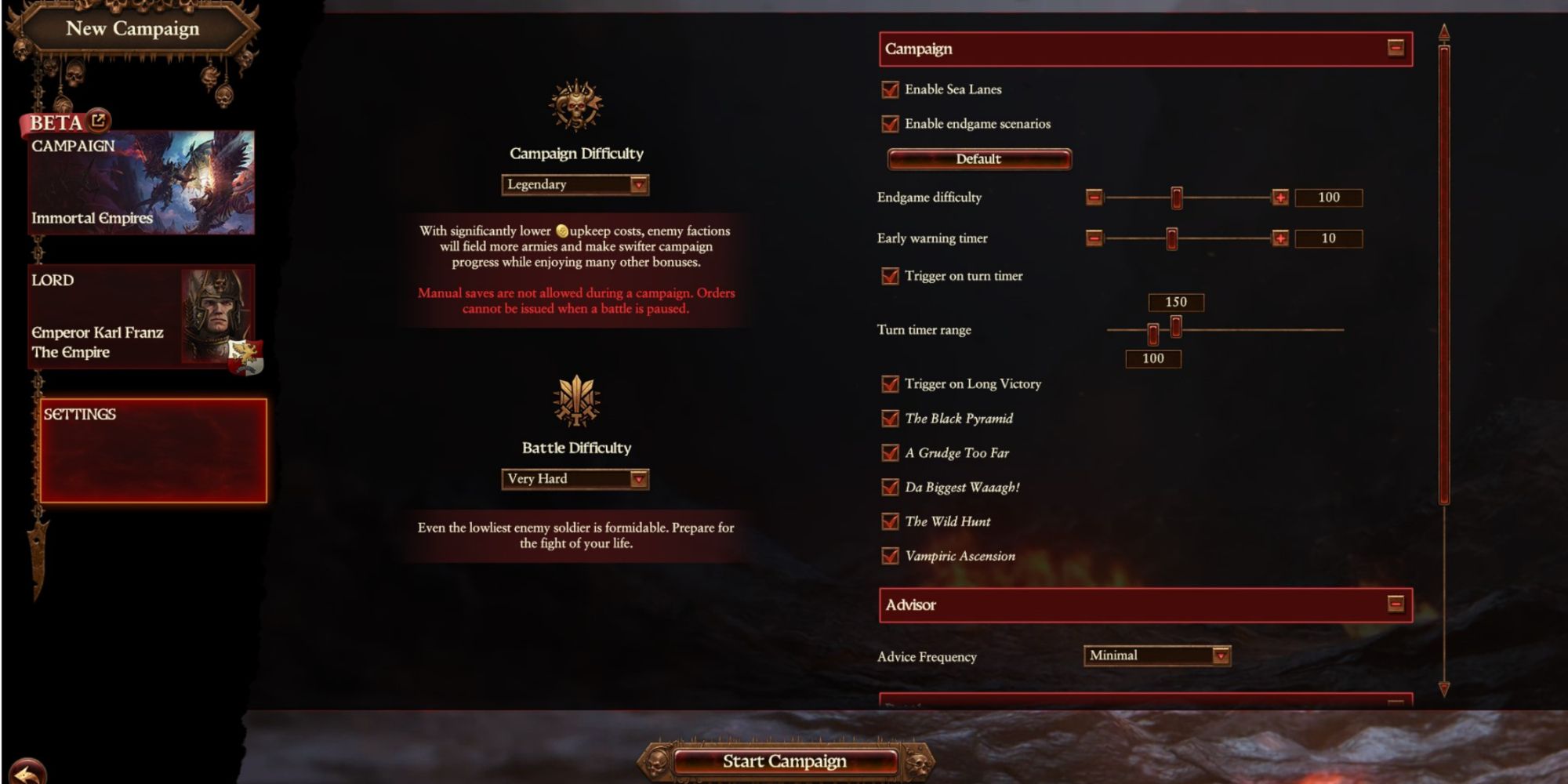 Even before beginning your campaign, there are a number of settings you can alter to perfect your experience. The most important is Campaign Difficulty, as this will affect nearly all facets of your game, such as Upkeep Costs and how the enemy A.I. will play. Higher difficulties will result in greater challenge, and for new players either Easy or Normal difficulty are recommended. These allow you to learn the game and your faction without the pressure of powerful enemies or mitigating effects.

Hard and Very Hard will provide a sizable increase to the game's modifiers, and you may find yourself struggling if you are playing something that is unfamiliar. Playing a faction for the first time on these difficulties is not generally recommended, unless you have high amounts of game experience.

Finally, Legendary difficulty should only be selected if you are confident in your ability to play your faction to a strong level. The A.I. will receive massive bonuses, and you will have less freedom in how you choose to play. Manual saving is also disabled to prevent save scumming.

Other settings such as Battle Difficulty or End Game Scenario parameters will also impact your experience, and many players will choose to turn off these Scenarios completely. This is a good option for helping learn the game, as it will give you more turns to play without being invaded by a strong end game threat. 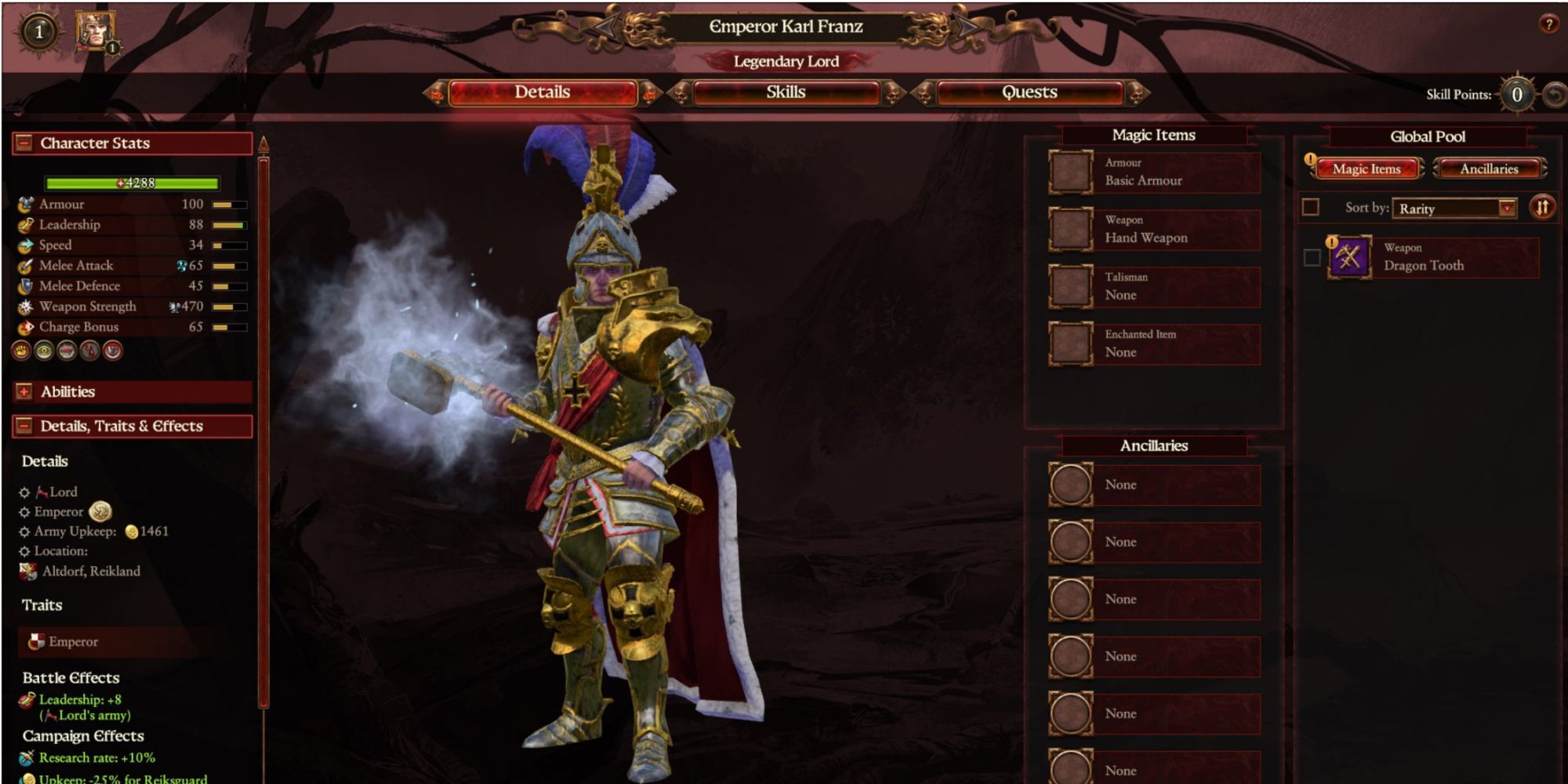 With so many options to choose from, figuring out your favorite faction can be a difficult process. Some will be much simpler than others, thanks to either their mechanics, starting armies, or starting location. With no in-game difficulty rankings, learning how hard a faction is can be trial and error. Don't be afraid to restart a campaign if things go horribly wrong, and remember that your gameplay will differ greatly depending on who you are playing, so if you are not enjoying how something feels, there are many other options to consider.

Campaigns recommended for beginners are marked with a silver hammer in the faction selection screen.

The most important thing to remember when learning a new faction is to experiment. Trying out various units on the battlefield or advancing in new directions will give you the experience needed to become fully comfortable with them. Provided you are not playing on Legendary difficulty, you can always save the turn prior, in order to have a fallback should a risky option turn sour. Figuring out things such as the best starting invasion route, or the optimal army build will take some time, and you should also try to experience as many new factions as possible, in order to broaden your knowledge.

To optimise your game-play, you will want to play to a faction's strengths. For example, Bretonnia is a strong cavalry focused faction, but trades this for weak infantry options. Incorporating a greater proportion of mounted units into your armies will give you a stronger set-up and can help you mitigate their weaknesses. Another example would be focusing on Food acquisition when playing Skaven, in order to quickly create a high level capital settlement. These strengths and weaknesses can be primarily learned through and error, but also through online resources.

Try To Plan Ahead 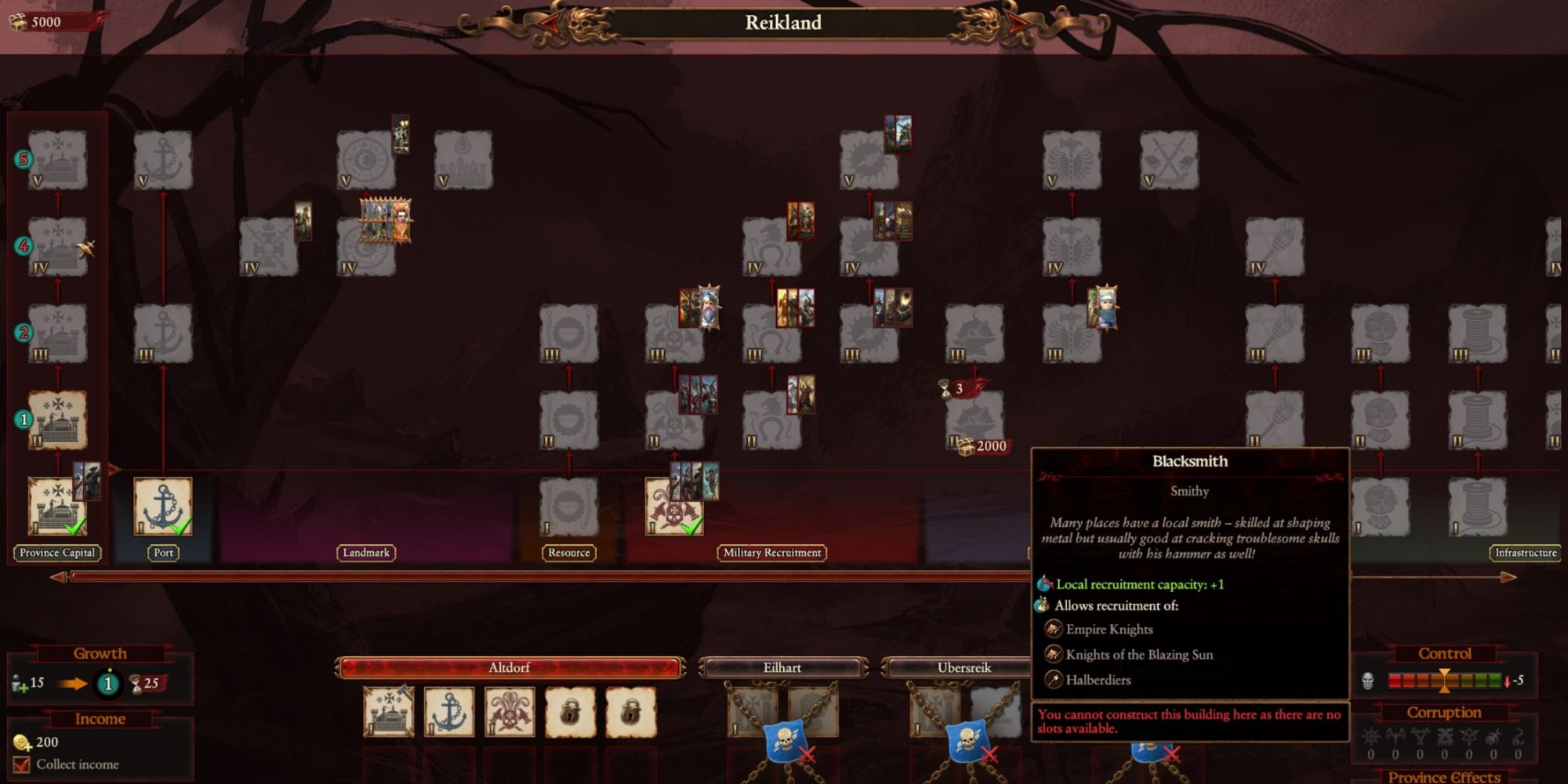 Despite being a hard thing to do when first starting out, having the ability to plan your subsequent turns will help you speed up your decision-making and campaign experience. Knowing what enemy you are going to attack next, or what structure you will be building in your capital, will aid you in making your gameplay more efficient. Play to your Campaign Objectives, and try to plan out your invasion route, depending on who you are currently at war with and what your immediate environment is like.

A good rule to play by is to try and restrict yourself to one active warfront at a time, to prevent being attacking in the rear, where you may not have any defenses.

Your first priority is normally to unify your starting province, so focus on attacking the unowned settlements and faction you begin at war with. This should give you a good starting foundation from which to expand. Spending time to build up your infrastructure can be a good method of using some free time, as if you are not currently engaged in a war, you can outfit new armies or spend your gold on improving your settlements.

Keep an eye out for potential allies, as they can not only provide you with military aid, but also with increased income from Trade Agreements and a larger unit recruitment pool via the Outpost system. For example, when playing as Karl Franz, you should be looking towards Bretonnia for potential allies, as their strong cavalry and strategic location relative to you make them a valuable asset to have on your side.

Some factions are more or less likely to accept a diplomatic offer with you, depending on factors such as Aversion, Trespassing Penalties or previous diplomatic agreements with their allies/enemies. Keeping a lookout for who likes or dislikes you can help with deciding who you should go to war with, and who you should try to befriend.