Last year I wrote about how as a child, I would raid every CD in my house so that I could summon monsters in Monster Rancher. I would never have guessed that in 2022 I’d be doing the same thing again, only this time, I’m raiding every wallet to find cards and IDs. Ultra Kaiju Monster Rancher utilises NFC, (near-field communication, the magic that makes contactless card payments work) to create new monsters, though rather bizarrely, does not allow Amiibo to be used, even though Amiibo also use NFC. Without Amiibo support, I was left to wonder, what do I have that uses NFC?

Credit/debit cards were a sure bet. The bus pass that I haven’t used in two years also worked. Those Pokemon Rumble figures are a bust, though. Although, if I had some kind of employee access card, I presume that would work too. The billionaires are right, working from home is the worst. Sure, I see my family more, but now I’m a kaiju short.

In true series style, Ultra Kaiju Monster Rancher has you creating, raising, and battling monsters so that you can climb the trainer ranks and become a champ. The biggest change (literally) in this latest title is that your monsters are now towering kaijus. There’s certainly a novelty aspect when it comes to having some whopper monsters to play with. 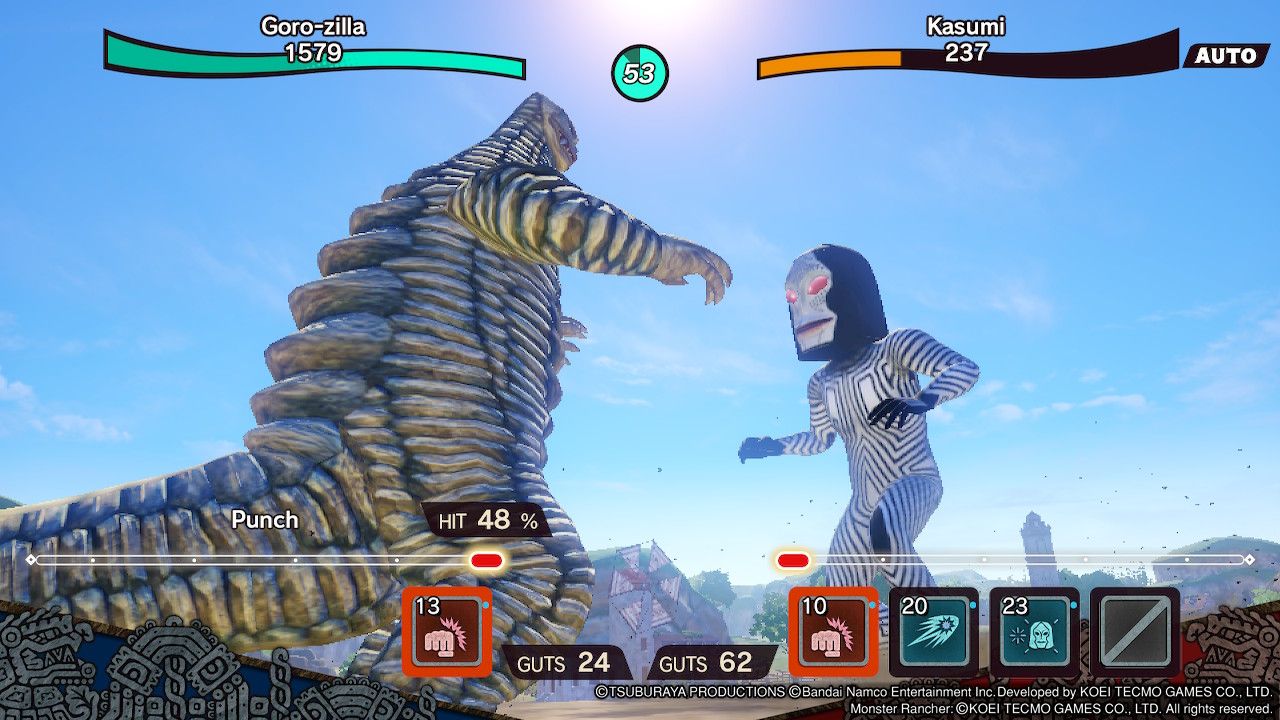 They look like they were created using retro special effects, suitmation in particular, as each kaiju seems suspiciously like a human in a costume. Think back to the original Godzilla film or the bad guys from the Power Rangers — that’s the aesthetic you’re getting. Don’t get me wrong, their retro appearance is a major positive here. It gives them a quirky charm that reminds me of my childhood. It’s clear the game purposefully leans into this tokusatsu angle. Aside from the obvious kaiju design, it features Ultraman from the popular Japanese TV series of the same name.

Before you start lamenting the fact you only have one debit card, don’t panic. Ultra Kaiju has other methods for generating new monsters. In addition to Memory Boards (NFCs), you can use keywords to summon new monsters too. Simply choose a combination of two keywords and see what pops out in the shrine. There’s also the choice to input codes, receive a kaiju supplied by the shrine (which changes season to season), or select from the Field Guide, which allows you to summon back a monster type you’ve previously owned. Regrettably, nearly all monster generation options cost in-game money, so you can’t just sit and spam monster generation without affecting your bank balance.

The NFC aspect is arguably better for Japanese players, as Ultra medals toys work with the game for Memory Board purposes. There’s also the code option for players to input UMF codes, which come from other products such as Ultraman toys. In all honesty, I was surprised to even get this game in the West, so I’m not going to complain. We have keywords, at least, and I’m sure my friends won’t find it that weird when I ask to see their debit cards the next time they visit. 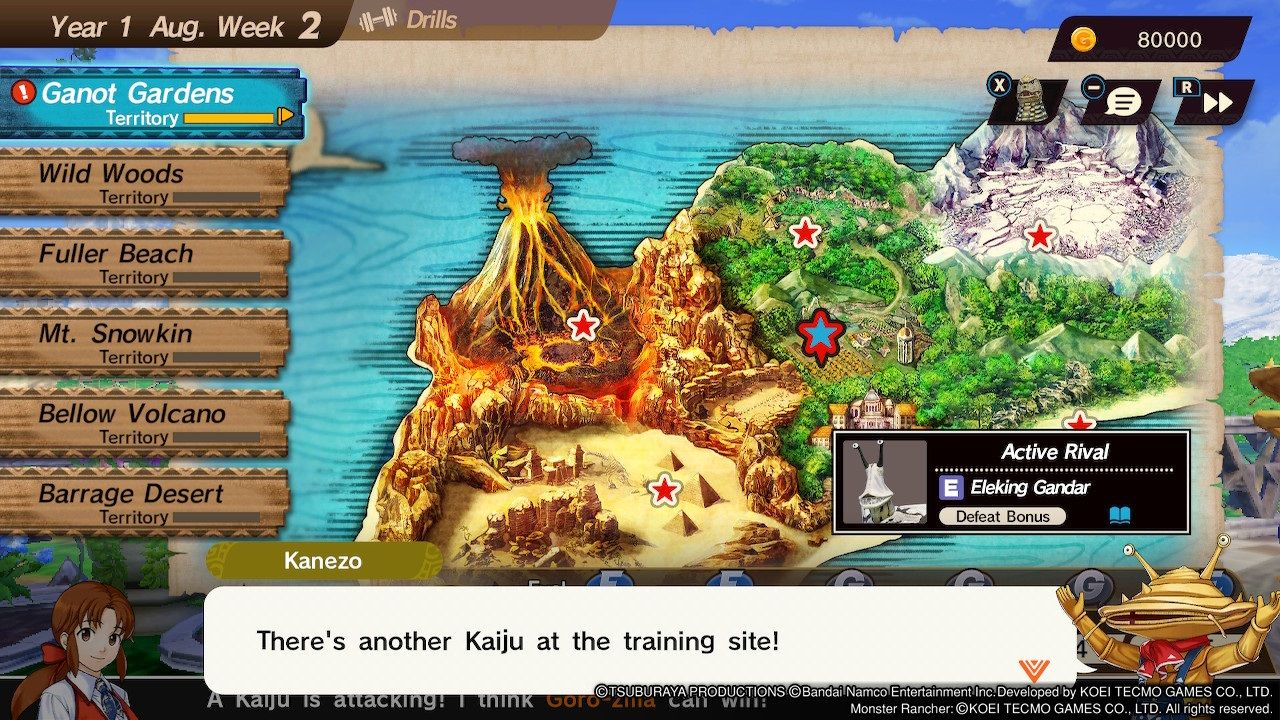 The gameplay is familiar territory for Monster Rancher fans, and not just because you’ll see familiar faces like Holly and Colt pop up. All of the mechanics are much the same as past titles, only each comes with a new twist or improvement, especially when compared to the recent port of Monster Rancher 1 & 2 DX.

In regards to generating monsters, some NFC options will offer different monsters each time you scan them. Additionally, keyword-generated monsters will offer a different kaiju if you try to summon one you aren’t eligible to raise, rather than just monster-blocking you with an “I’m sorry, you can’t summon this monster” message. You can also summon new monsters even while you have one in tow, and you’ll just be prompted to decide which you wish to store once you generate a new one. Saving you from the back and forth of storing monsters and summoning new ones. You can still fuse two monsters together and throw ingredients into the mix, but there’s also a new cookie option in Ultra Kaiju, as feeding them cookies means they can inherit the traits of other kaiju.

Errantries still teach your monsters new techniques, but now, you send them to a rival trainer you must have previously beaten in battle, rather than shipping them off to some monster boarding school. Feeding your monsters is a more involved process, too, as now you can mix in spices to shake things up, which is vital as your monster will get bored of eating the same thing repeatedly.

As we’re dealing with kaiju capable of destroying whole cities, there are some gameplay changes made to accommodate this. When training, your monster is essentially claiming its territory on the island. Other kaiju can roam into your territory and attack, so you’ll need to defend your territory against them or suffer a reduction on your territory gauge. You’ll also find your monster’s mood has a new element to watch out for — anger. If its anger level reaches too high, your kaiju will go on a rampage and can’t be trained or used in battles until it calms down. When your monster rests, there’s a chance it will be too angry to sleep, or if it does manage to grab forty winks, its dreams will affect how well-rested it is the next day. 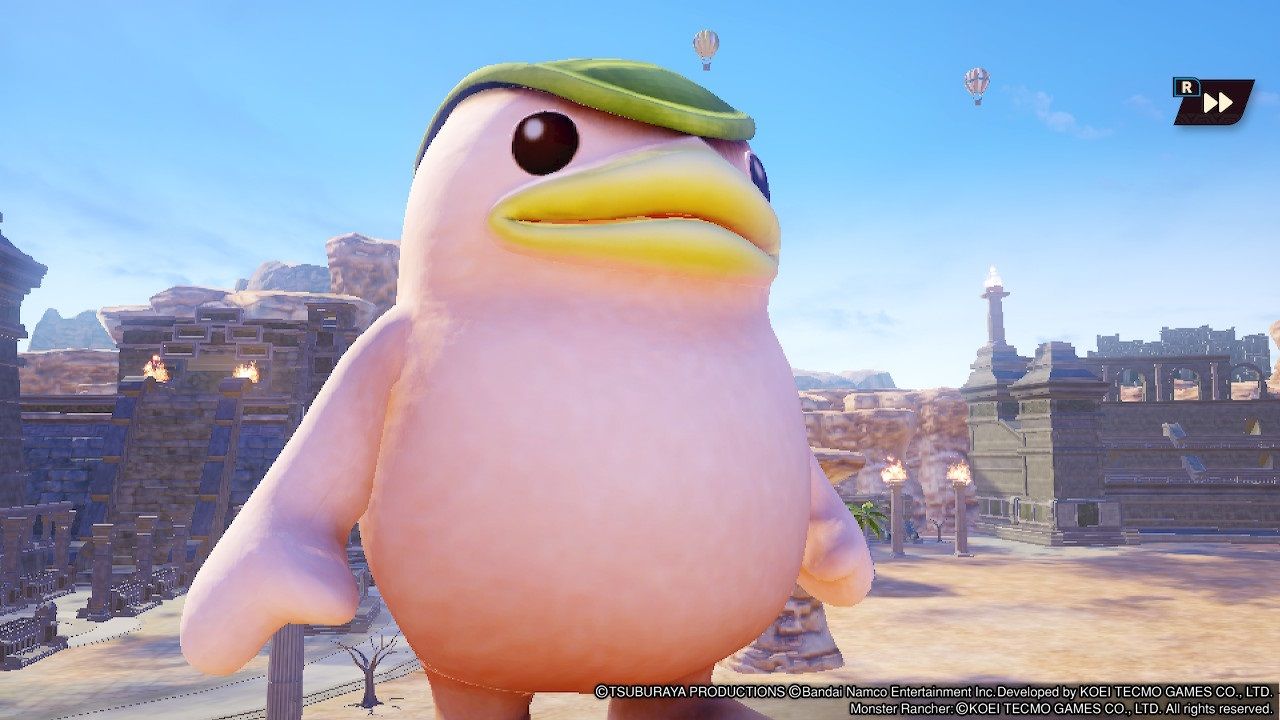 Ultra Kaiju Monster Rancher comes close to being my ideal Monster Rancher game. It has nearly everything you know and love about the Monster Rancher series, with an extra level of polish and improvement. It maintains its signature gameplay, but there’s enough new content and tweaks to existing mechanics to make it stand out from the rest. Not to mention, it just looks a lot prettier too.

There are two things I would wish for to make this game perfect. The first is Amiibo support – it’s mind-boggling to have NFC monster generation for a Nintendo Switch game and not have Amiibos involved. I wouldn’t even mind if we don’t get fancy Monster Rancher Amiibo cards, let it use the pre-existing Amiibo figures and cards for all I care.

The other thing is more of a leap as it goes against the point of this title, but I want to have my regular monsters back. I loved the change of pace with the kaiju, but only as a novel break from my usual grind of DX. I get that kaiju is what this title is all about, but this game has just made me yearn for a new title with regular monsters even more, but one that has all these new features. Give me back Tiger, Suezo, Golem, and all the others, but give them the graphic glow-up of that Mochi kaiju. I want a new title that has all this, but instead of humongous monsters, give me the humongous back catalogue of all our favourite monsters to play with.