Riot Games’ VALORANT goes into a closed beta period on April 7th, officially opening the game to the lucky few who have been granted access. The game is a character-based first-person shooter, featuring at least nine confirmed agents available for play. Brimstone is a burly American agent who utilizes calculated strikes to help his teammates and take down enemies.

Donning a perfectly placed orange beret, Brimstone brings multiple air strike options for slowing down his opponents. As with every other VALORANT agent, Brimstone has two basic abilities that can be purchased at the start of a round, one signature ability, and one ultimate ability. 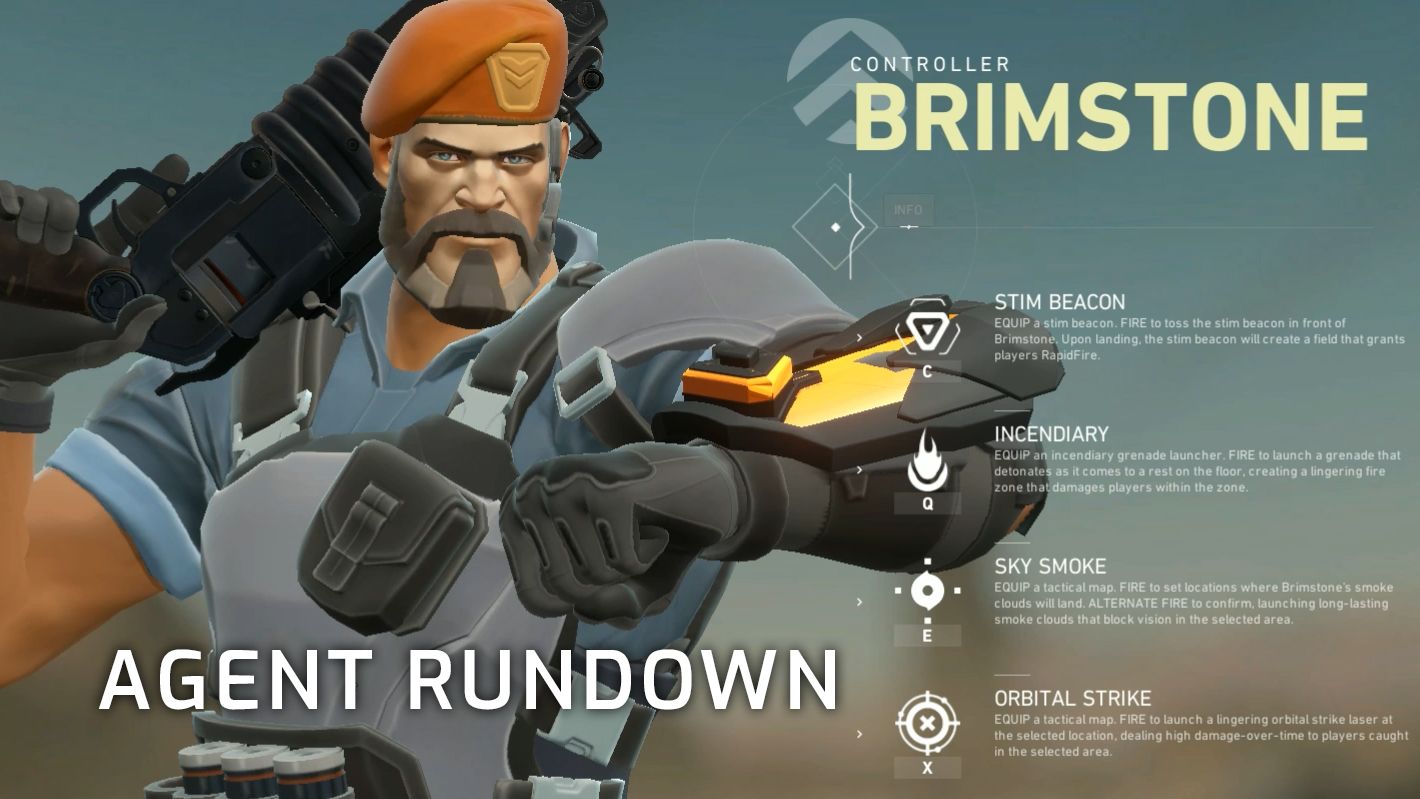 The first of Brimstone’s basic abilities is Stim Beacon, a purchasable ability that allows the player to throw down a beacon that gives Brimstone and nearby teammates a Rapidfire bonus. Rapidfire increases fire rate, reload speed, weapon switch speed, and recoil recovery by about 10%. Stim Beacon costs 100 credits at the start of the round.

Brimstone’s second basic ability is Incendiary, purchasable for 200 credits. Incendiary will seem familiar to many Counter-Strike players, as it acts very similar to a Molotov. As the name would suggest, buying Incendiary equips Brimstone with a grenade launcher that fires incendiary grenades. The grenades explode once they reach the floor, creating a circle of fire that deals damage to both enemies and, to a lesser degree, teammates.

The American agent’s signature ability is called Sky Smoke, which allows the player to open a map and deploy smoke grenades in specific locations without ever having to be seen. The player can equip up to three smokes each round, each costing 100 credits. As this is Brimstone’s signature ability, it is available for use every round.

VALORANT requires players to collect charges before their agent’s ultimate ability can be used. Brimstone’s ultimate, called Orbital Strike, allows players to select an area of the map and send a deadly laser strike that deals damage over time to anyone caught in the crosshairs. Orbital Strike takes six points to fully charge, which can be earned by getting kills, defusing the spike, or collecting the Ultimate Orbs that are placed around the map.

Abilities like Sky Smoke and Incendiary can open up valuable areas of the map when on offense, and block off bombsites on defense. When used strategically, Brimstone’s abilities can help teammates while dealing devastating damage to enemies. VALORANT’s closed beta begins on April 7th, and the full launch is expected to come this summer.