Voice of Cards: The Beasts of Burden is the third game in the ongoing Voice of Cards series by Square Enix — traditional RPGs that use an interesting tabletop aesthetic and a ‘game master’ narrator to create a charming adventure in a mysterious fantasy world. Voice Of Cards: The Beasts of Burden offers another chance to explore the world of Voice Of Cards with new characters and a new adventure to uncover.

This new entry in the series will be familiar to fans of the first two, offering only a few minor tweaks to the gameplay, and a few interesting new mechanics. If you're new to Voice of Cards, however, everything will be unfamiliar to you, and there's plenty of advice that the game won't give when you're embarking on your adventure. Here are some useful tips to get started. 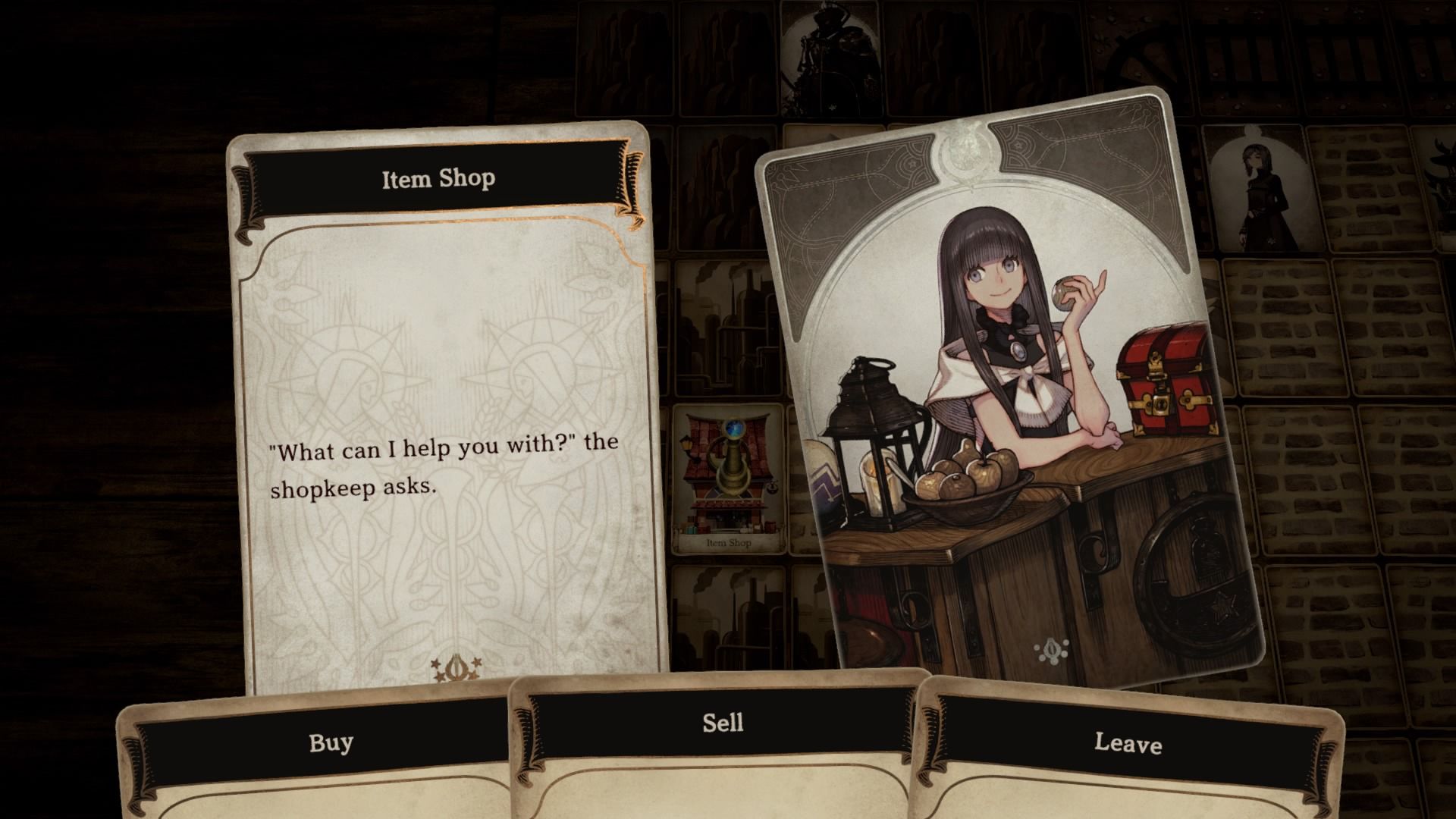 Without a doubt, your equipment and your items in Voice of Cards: The Beasts of Burden are among the most important factors in making sure you're up to the task of taking on enemies. There's a lot in this game that's easy to push through below the recommended level if you simply have the right equipment, items and skill setup for each character.

New equipment is sold at the armourer for every new town you find. Each town's stock is also usually consistent with which characters you'll have in your party at this time, so be sure to check out the most recent town you've visited each time a new character joins your party, as you'll want to replace their default weapons pretty quickly. Weapons and armour provide the largest boost to character's stats, so you don't want to be under-equipped.

You also want to make sure your inventory is stocked with salves, and at least a few of each of the status effect removal items. Having revival items such as an inspirilelixir and plenty of omnisalves are essentially mandatory for bosses close to the end of the game.

Buffs And Debuffs Are Really Useful 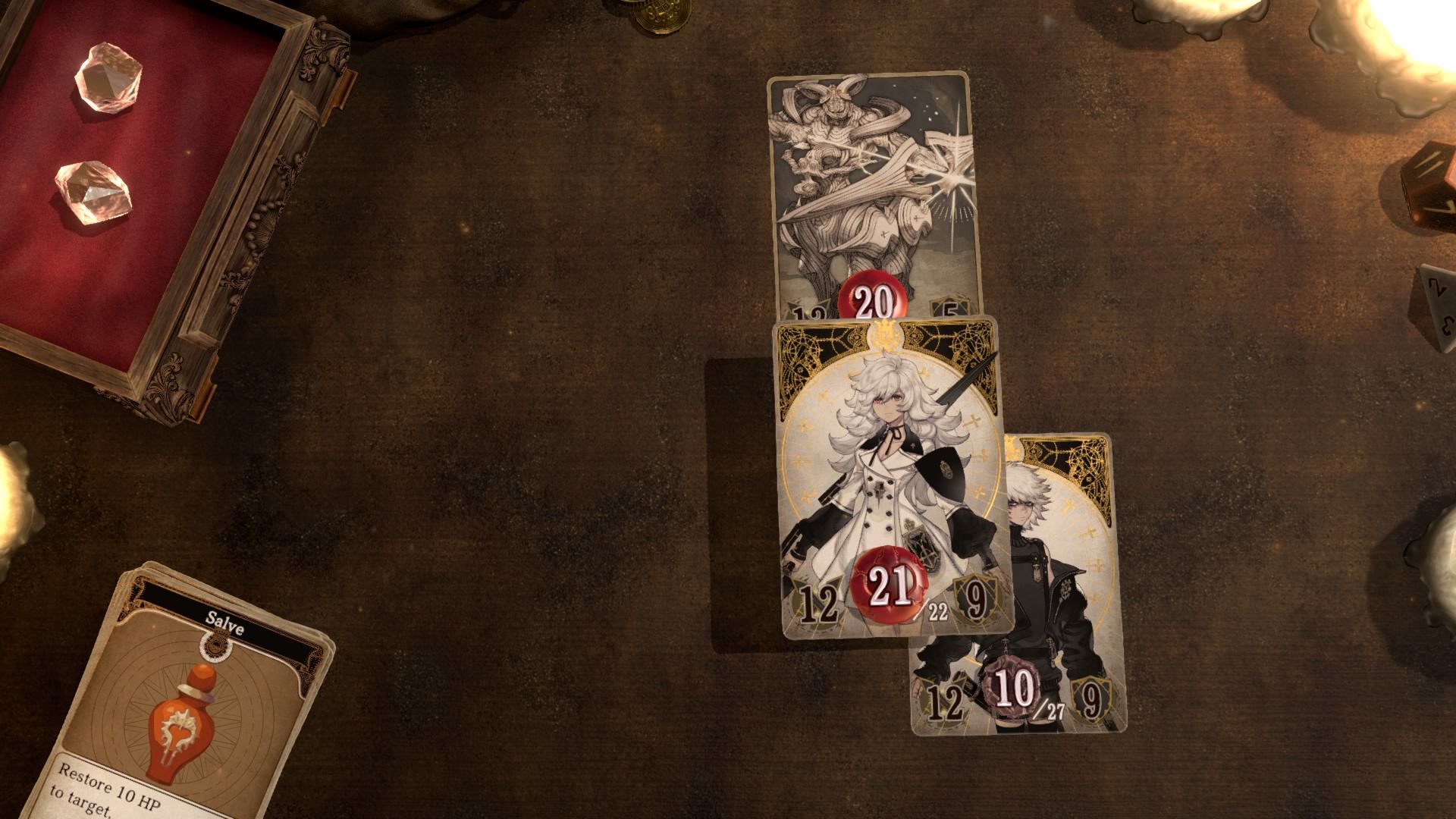 Any ability that increases your ATK or DEF or decreases any of the enemy's stats for an extended period is a useful one. It may not seem like it at first, but as the game progresses, these types of skills offer a lot of utility, especially when the enemy's DEF greatly exceeds the ATK of your characters.

In addition, ATK buffs on your team can be used in combination with the high-cost super attacks to deal additional damage. This is essential when fighting against enemies with an excess of HP, which occurs often in the game's latter third.

Flip Over Cards For Dark Backstories 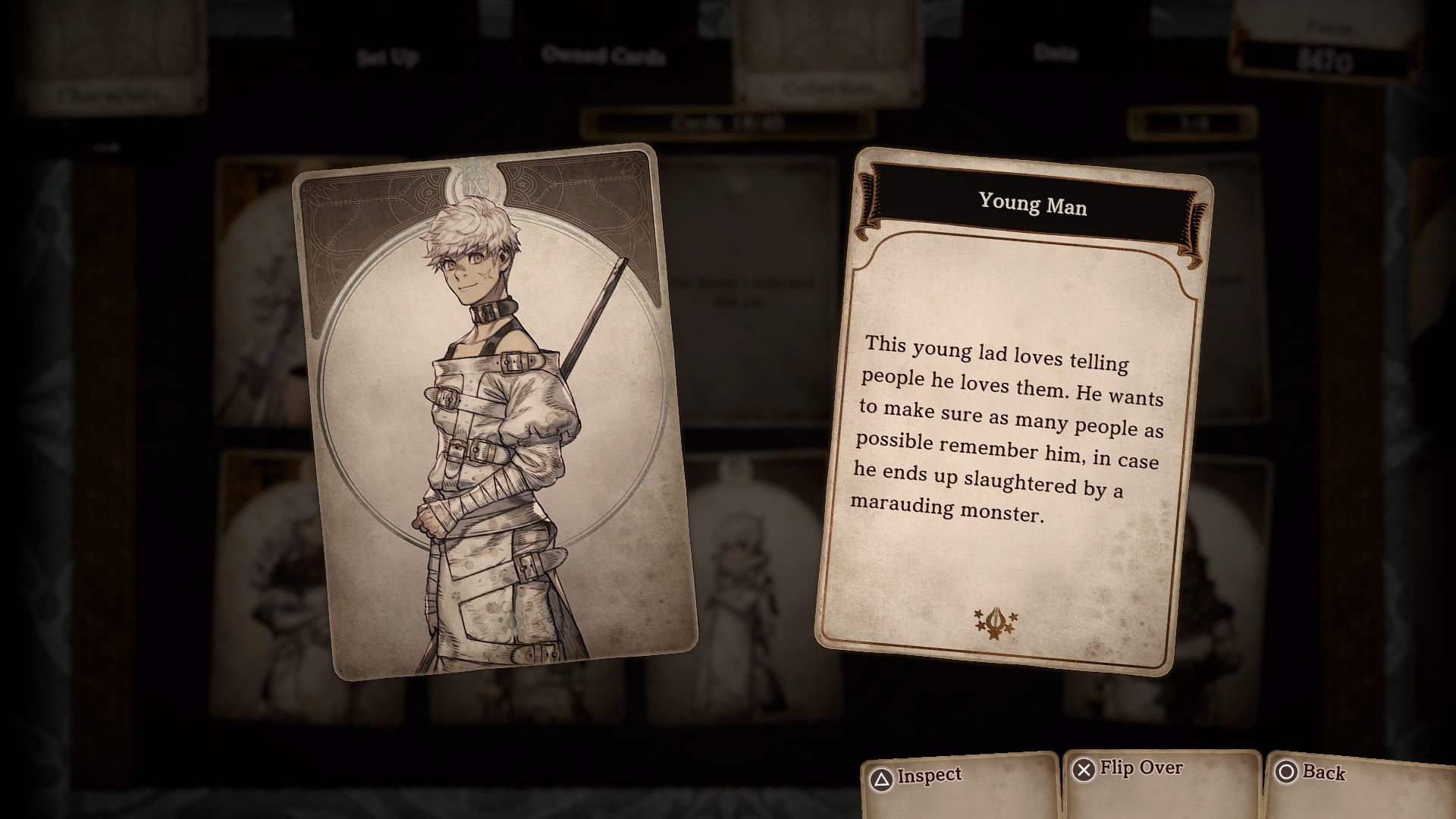 One of the most appealing parts of Voice of Cards is collecting the backstories for all of the characters and monsters. For main characters, this will take some time and story progress to unlock (usually after key story events involving that character), but for NPCs that you encounter in the world, it may only take interacting with them one or two times.

When you've unlocked the backstory for a character, this can be viewed by finding the character in your collection of cards and flipping the card. These additional bits of context are occasionally jokes, but are more usually deeply sad vignettes about the character. If you're easily emotionally moved by video games, you'll want to check these out for every character.

Expanding Your Monster Collection Is Essential 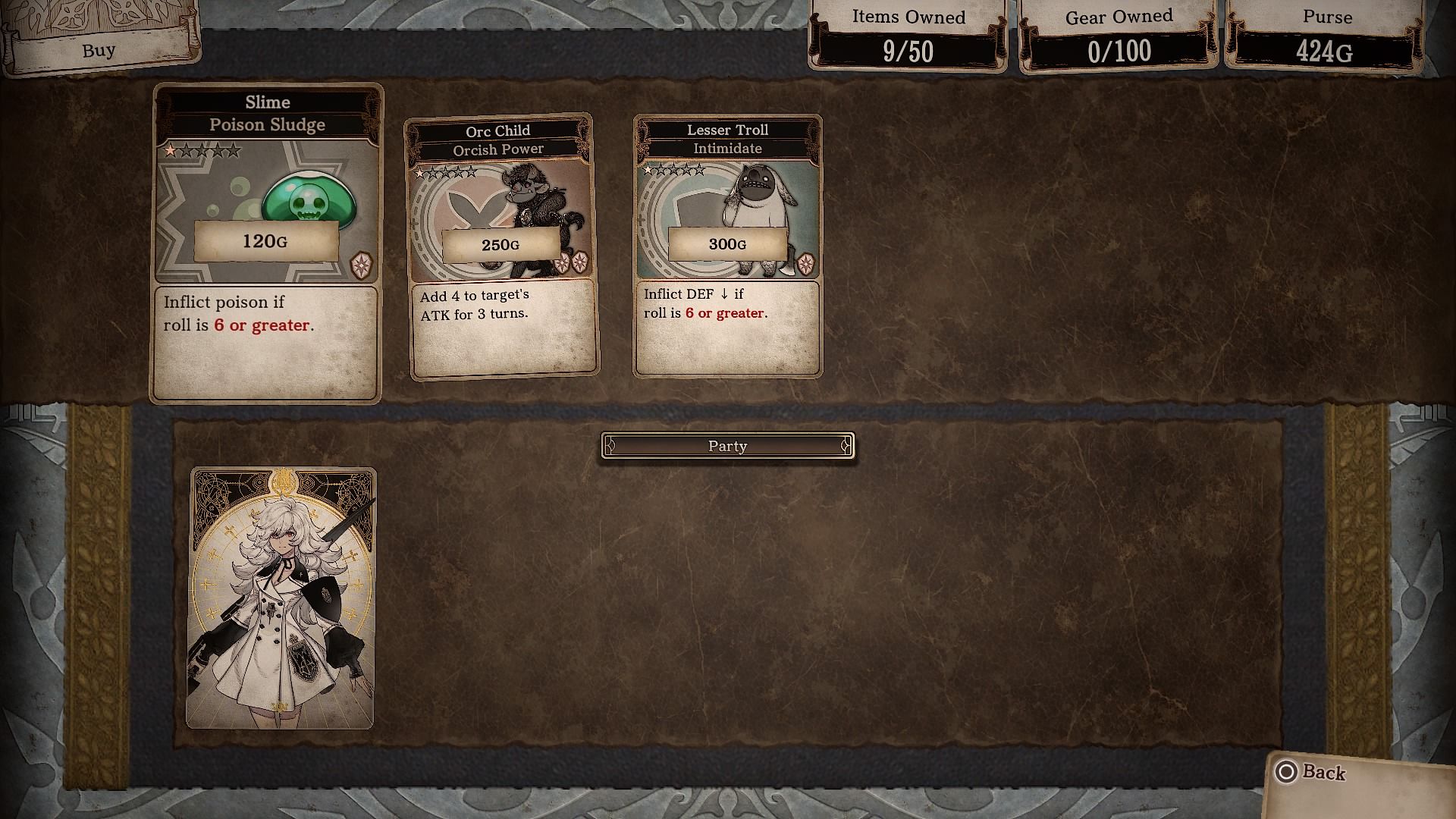 The new mechanic in The Beasts of Burden is the ability to find and utilise a variety of monster characters to fight by your side as unique abilities. These monster abilities can be used in combat, and unlike other abilities, are not tied to one specific character. This means monster cards can be used by any character.

The monsters have a range of interesting abilities, and in the mid-to-late game, these abilities can often be much better than some character-specific skills. Monsters are ranked with a star rating like Yu-Gi-Oh! cards, and this rating corresponds roughly with how powerful they are.

You'll find plenty of these monster cards through story progression, but you should also check the Pet Shop, which will offer a selection of new monster cards in each turn. Although some monsters will be quite costly, they are often a worthwhile investment. Try and buy as many of them as you can, especially cards that offer types of abilities that your characters don't already have. 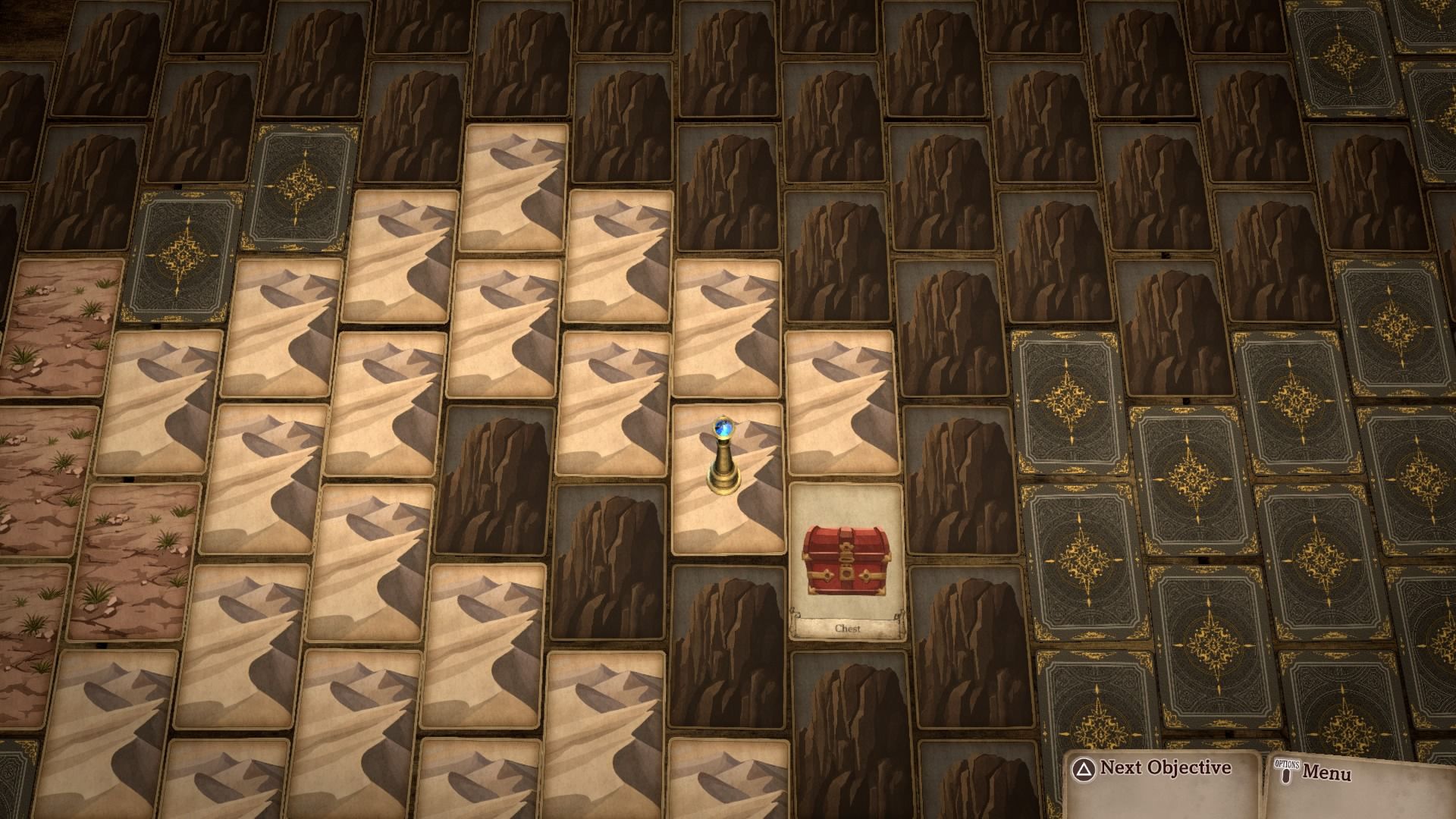 A crucial tip for The Beasts of Burden and the Voice of Cards games generally is to uncover every tile.

Every single tile on the overworld map potentially holds something worthwhile, from treasure chests (which can contain money or items) or random events, where you have the chance to interact with unique monster characters or wandering NPCs with something to offer you.

There are a limited number of these random events, and some of them will appear more frequently than others, but they're all worth engaging with, as they can get you useful items or experience, especially early in the game.

Although it may be tempting to skip over tiles to speed up your travel, it's worth going into all the corners of areas on the world map and dungeons, as you never know what might uncover with the next card flip.