Warframe narrates the journey of the Tenno across the Origin System, in a never-ending fight against the unjust behavior of many villainous factions wrestling for dominance. To effectively develop in combat, they must take advantage of many weapons and warframes, each one with a different purpose, and different abilities.

One of the many available warframes for you to obtain is Loki, a versatile warrior that can disappear from plain sight to avoid getting involved in any armed conflict or show up and disarm his enemies, rendering them completely vulnerable if needed.

How To Craft Loki 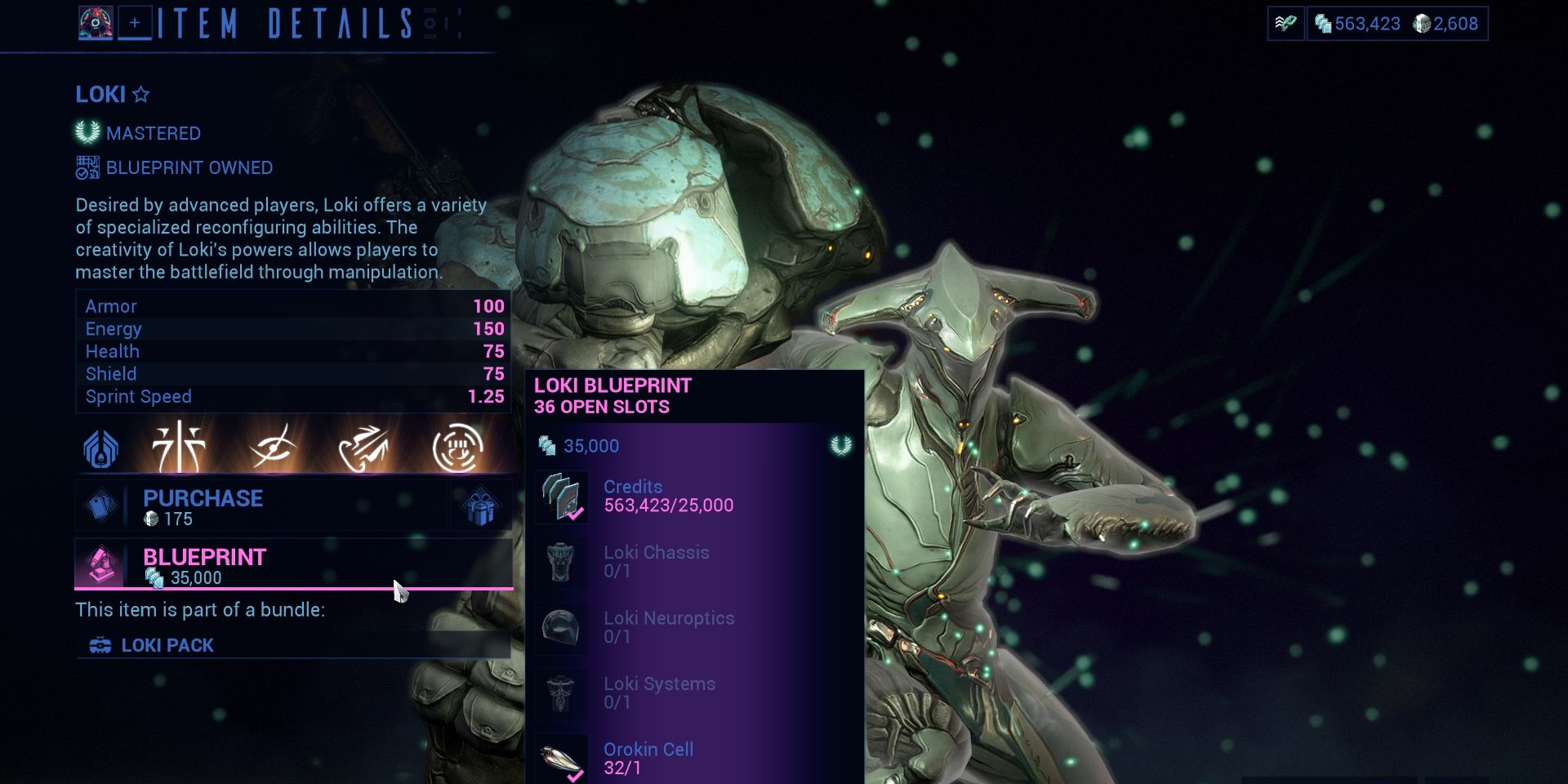 To craft Loki you must obtain his Main Blueprint first, which you can purchase in the Market for Credits. Once you obtain that you will have to go to the Psamathe node in Neptune and fight the Hyena Pack for the remaining three blueprints.

Loki's Wall Latch duration lasts 10 times longer than normal, up to a maximum of 60 seconds.

This ability can be extremely useful to take enemies from afar while being invisible. While it may be a bit circumstantial depending on the kind of mission you're in, sometimes stealthy solutions are necessary, and this passive skill will be undoubtedly helpful. 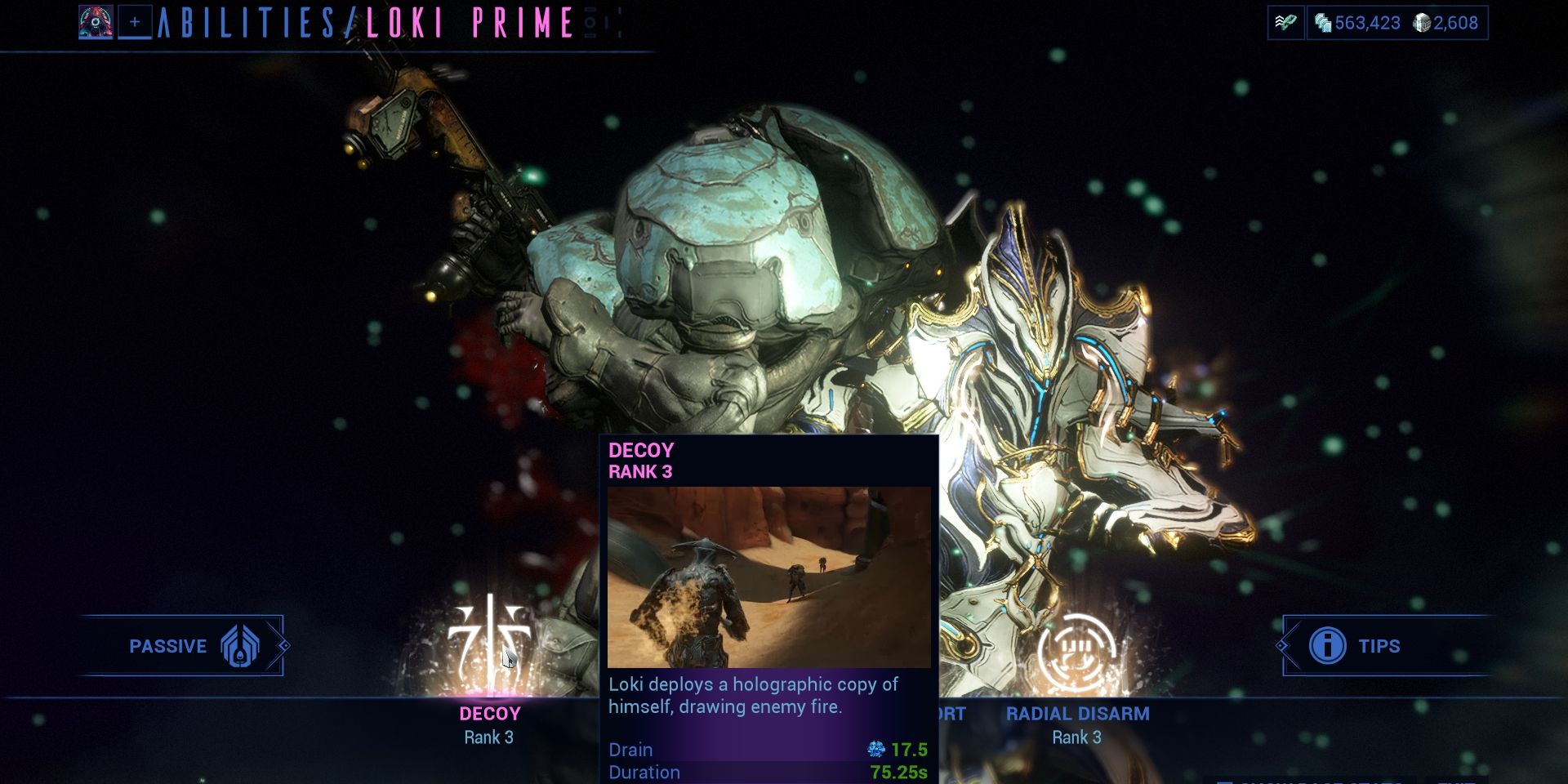 Decoy is a great crowd control tool, since being able to divert aggro in such a quick and effective way can turn any tight fight into a more comfortable situation, giving you the needed pause to reload and destroy any enemy group. Savior Decoy is the augment Mod for this ability, prompting your Decoy to spawn and change places with you before getting a fatal hit. 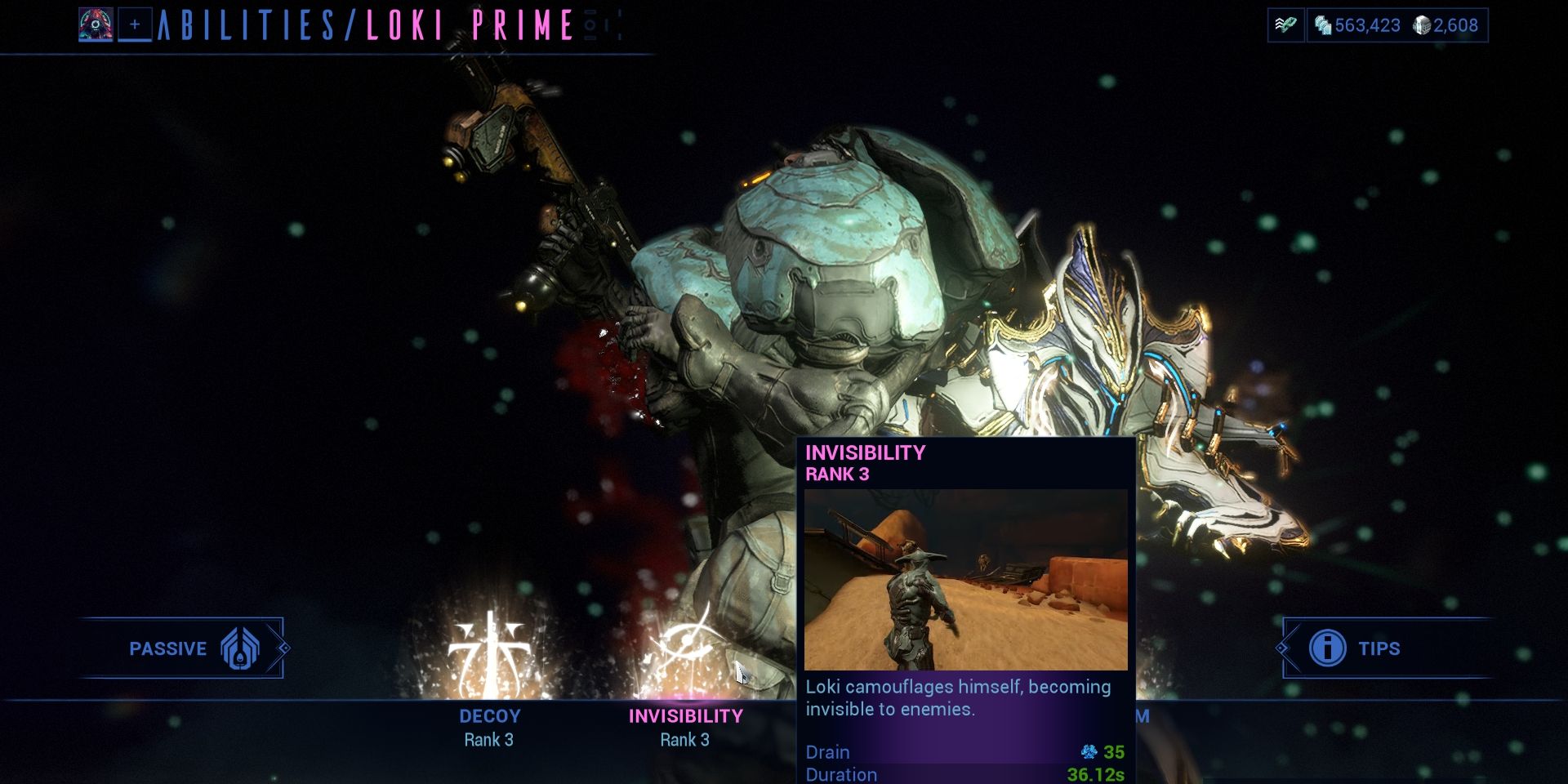 As the name says, Invisibility renders you unnoticeable for enemies while it lasts, which not only helps you to comfortably complete Spy or Sabotage missions, but also provides a critical advantage against enemies, since melee attacks get an extra 700% damage if you hit an unalerted enemy. Hushed Invisibility is the augment Mod that takes this ability above and beyond, silencing your fireweapons as well. 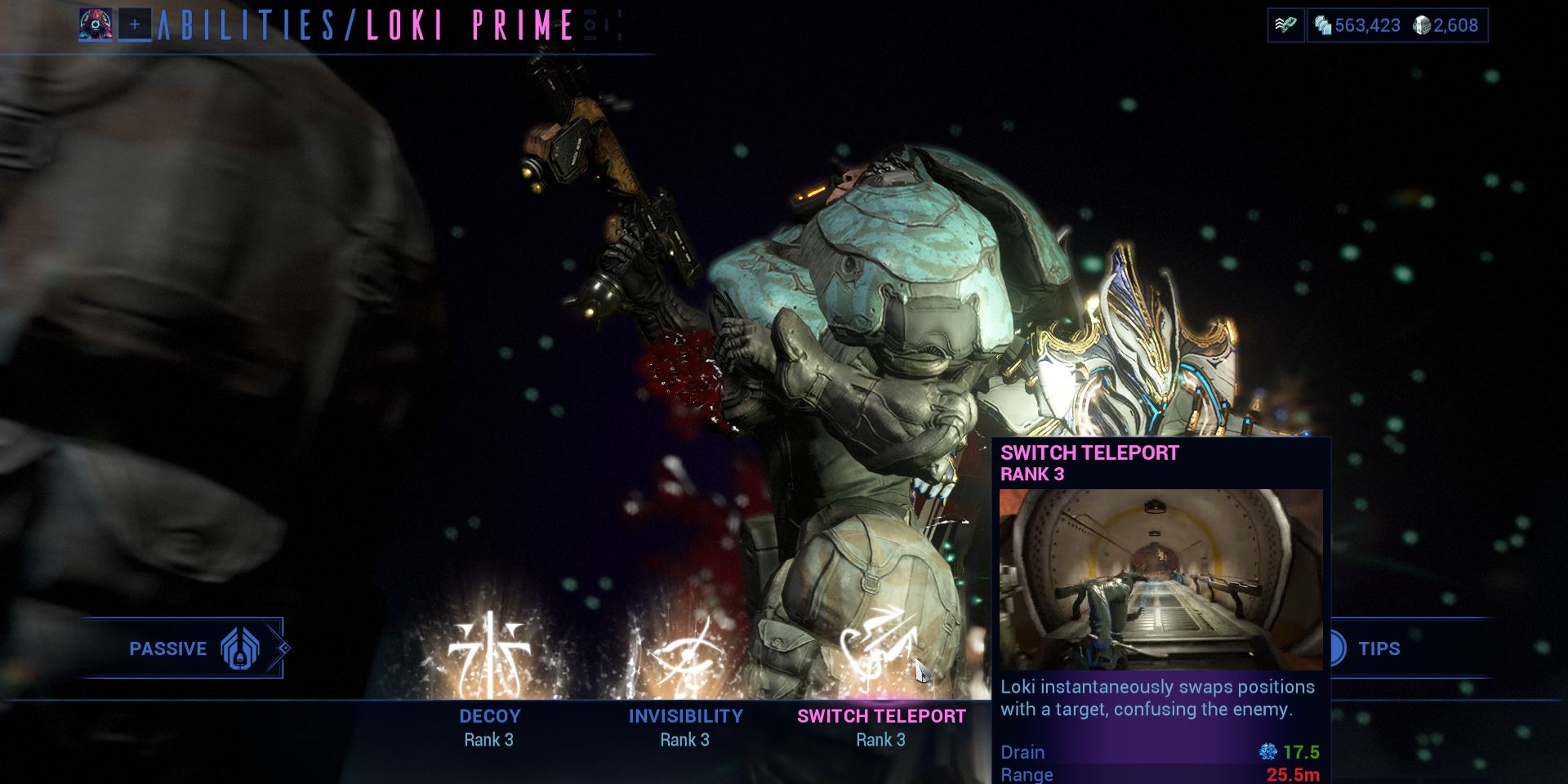 Switch Teleport is a very useful skill that allows you to quickly get out of any tight space or crowded fight, or even take any ally to a safer place at the expense of your own safety. That being said, any of the other three abilities make a better job at saving your bacon in different situations, so chances are that you won't use this ability too often. However, there's some potential if you use Safeguard Switch, the augment Mod for this ability that makes allies targeted by Switch Teleport become invulnerable for a short period. 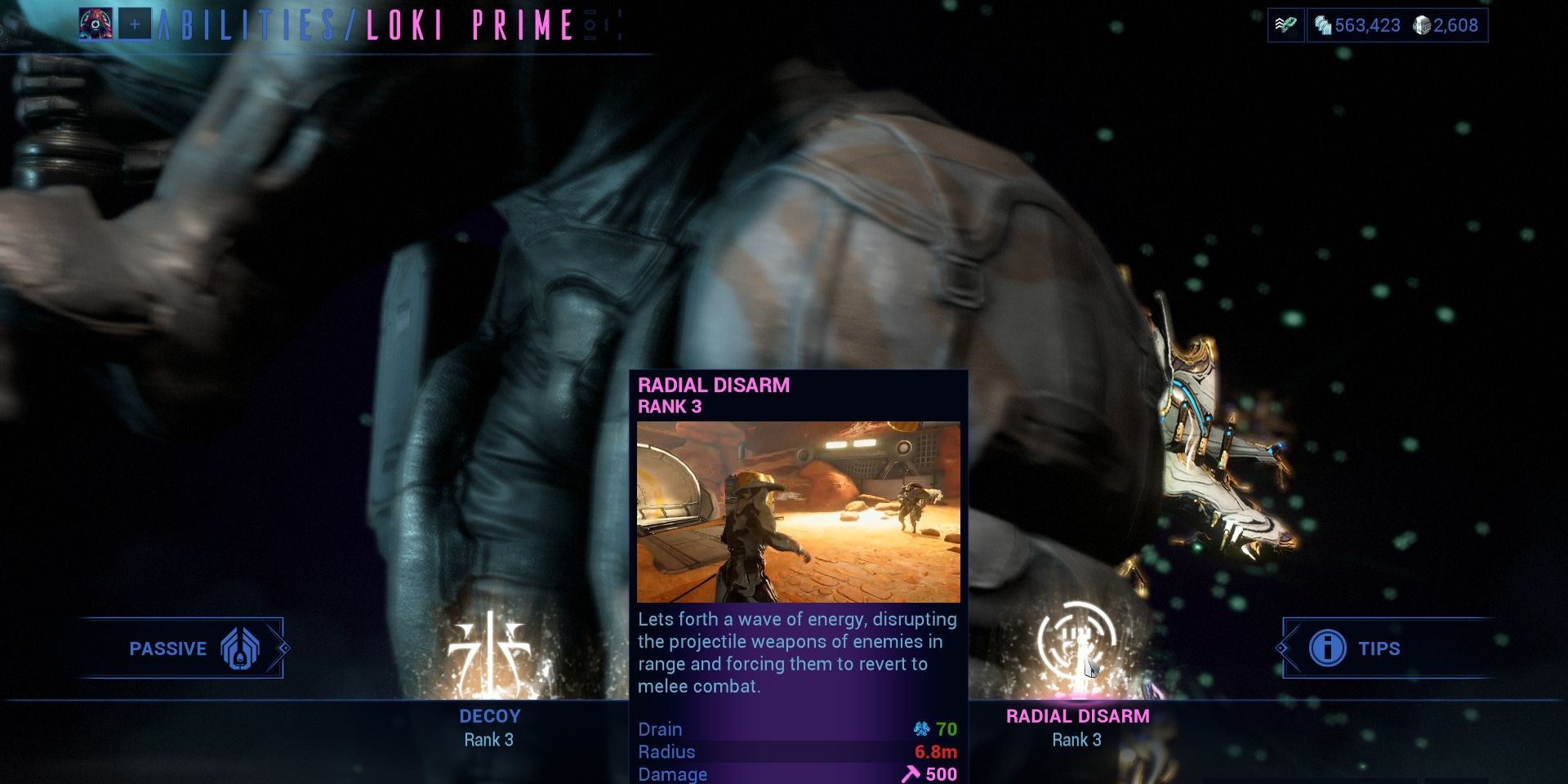 Radial Disarm: Lets forth a wave of energy, disrupting the projectile weapons of enemies in range and forcing them to revert to melee combat.

The final ability will be Radial Disarm, an AoE attack that immediately disarms and inflicts Impact damage on your enemies, leaving them in sheer confusion and ready to be annihilated. Irradiating Disarm will add even more damage by inflicting extra Radiation Damage.

The Prime version of Loki possesses higher Armor and Energy capacity, and two additional Naramon and Vazarin Polarities. This Prime warframe was released on June 11th of 2014, alongside the Bo Prime and Wyrm Prime. 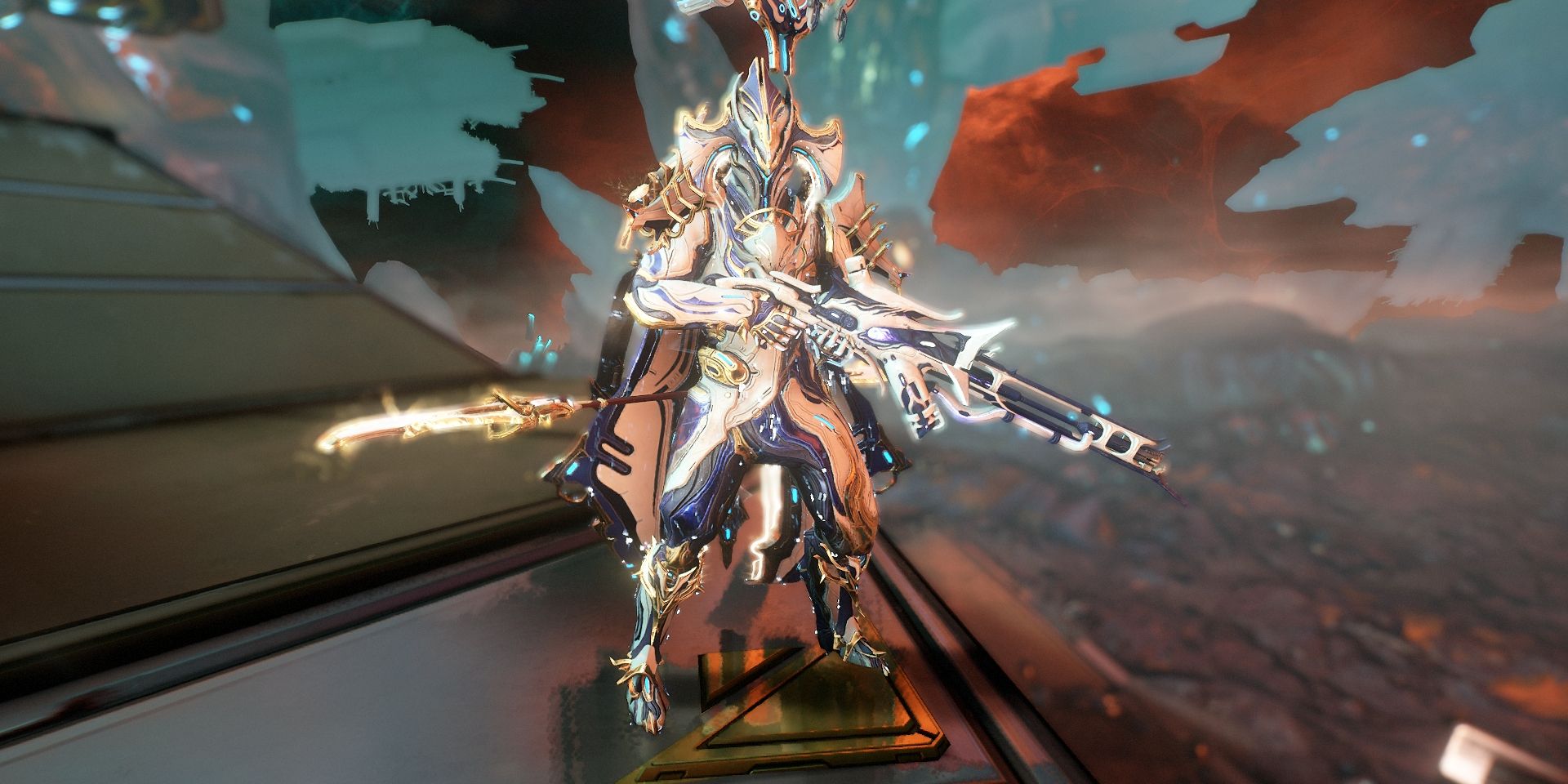 This build is extremely fun to play and super simple to understand, you just have to use Invisibility and then you can stealth kill any enemy in any circumstance since you will obtain a bonus of +700% extra Damage on Melee attacks to unalerted enemies. Continuity, Constitution, Augur Message, and Narrow Minded all are there to maximize the duration of your Invisibility, while Maglev and Armored Agility exist for better mobility. Flow and Streamline will make casting this ability more comfortable, and last, but not least, the gem of the crown will be Hushed Invisibility. Remember that you will be invisible but your shots will be heard, so this augment Mod comes incredibly handy for you to kill as comfortably as you want without losing the bonus.

This build will be more useful against groups of enemies or while you're part of a team, taking advantage of Radial Disarm's effect to leave your foes vulnerable as effectively as possible. Natural Talent will help you to shorten this ability's cast time, while mods like Cunning Drift, Augur Reach, Overextended, and Stretch maximize the area of effect of your ability, for better results. Continuity will provide better duration on the disarming skill, and Vitality and Flow will give you some needed extra Health and Energy because Loki can be a bit squishy at times.