Known as the Aeldari, or just the Eldar, these long-lived space Elves of Warhammer: 40K are a group that once had everything in the galaxy at their fingertips. That is until they almost destroyed themselves, fracturing the species into warring factions, damning the galaxy to an eternity of torment with the opening of the Eye of Terror and creating a new dark Chaos God, known as Slaanesh, that would feast on the souls of their descendants.

They're basically the only race in Warhammer to party so hard they almost destroyed the galaxy, quite the reputation to have, which is mainly why the scattered survivors of this hyper-advanced species are zealously hunted whenever they're encountered. The Eldar are a deeply tragic species when you dig into the lore, especially by 40K standards, and you can start to sympathize with them to an extent. There's a lot to dig through, so here's the gist of what you need to know about the Eldar in Warhammer: 40,000.

Who Are The Eldar? 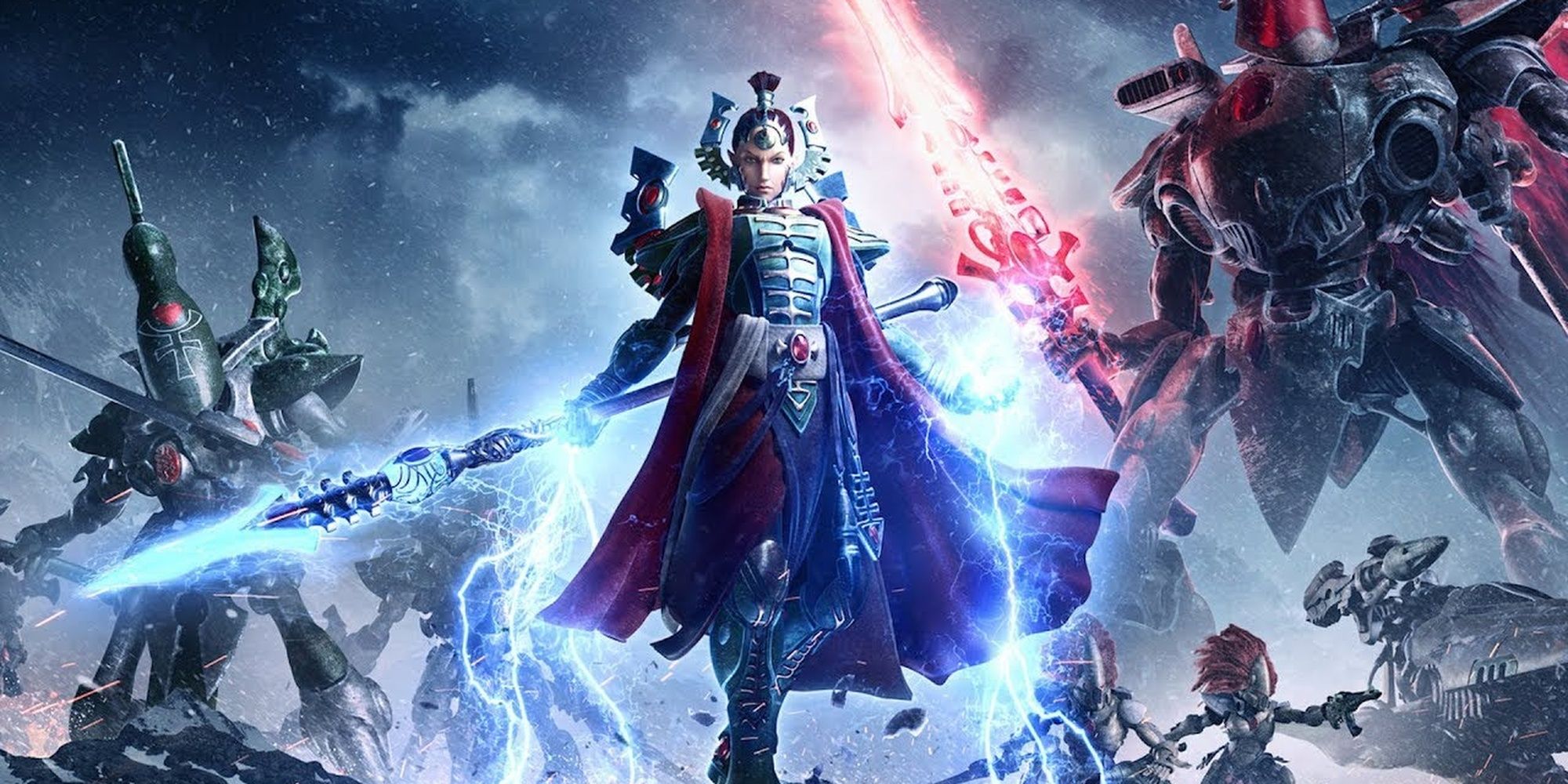 Not to put too fine a point on it, but the Eldar are basically "Space Elves". They're a tall, humanoid, hyper-advanced, and long-lived species that's been around for a very, very long time. They were once a galaxy-spanning Empire that was without equal, but it fell due to their pride and descent into excesses of hedonistic and amoral practices. Their grand and twisted frivolities created a cataclysm that wiped out all but a few who were shielded on gigantic ships, hidden in the Webway pocket dimension or safe on Maiden Worlds.

Fractured into separate sub-cultures, this once grand Empire is but a shadow of its former self. The drifting survivors of this species hang on as best they can, either in massive floating spaceships called Craft Worlds, hidden away on technophobic colonies, or continuing their old dark ways by choosing to live on as pirates. It's a dramatic fall from grace that was millennia in the making and is hours of reading material to sink into if you so choose. 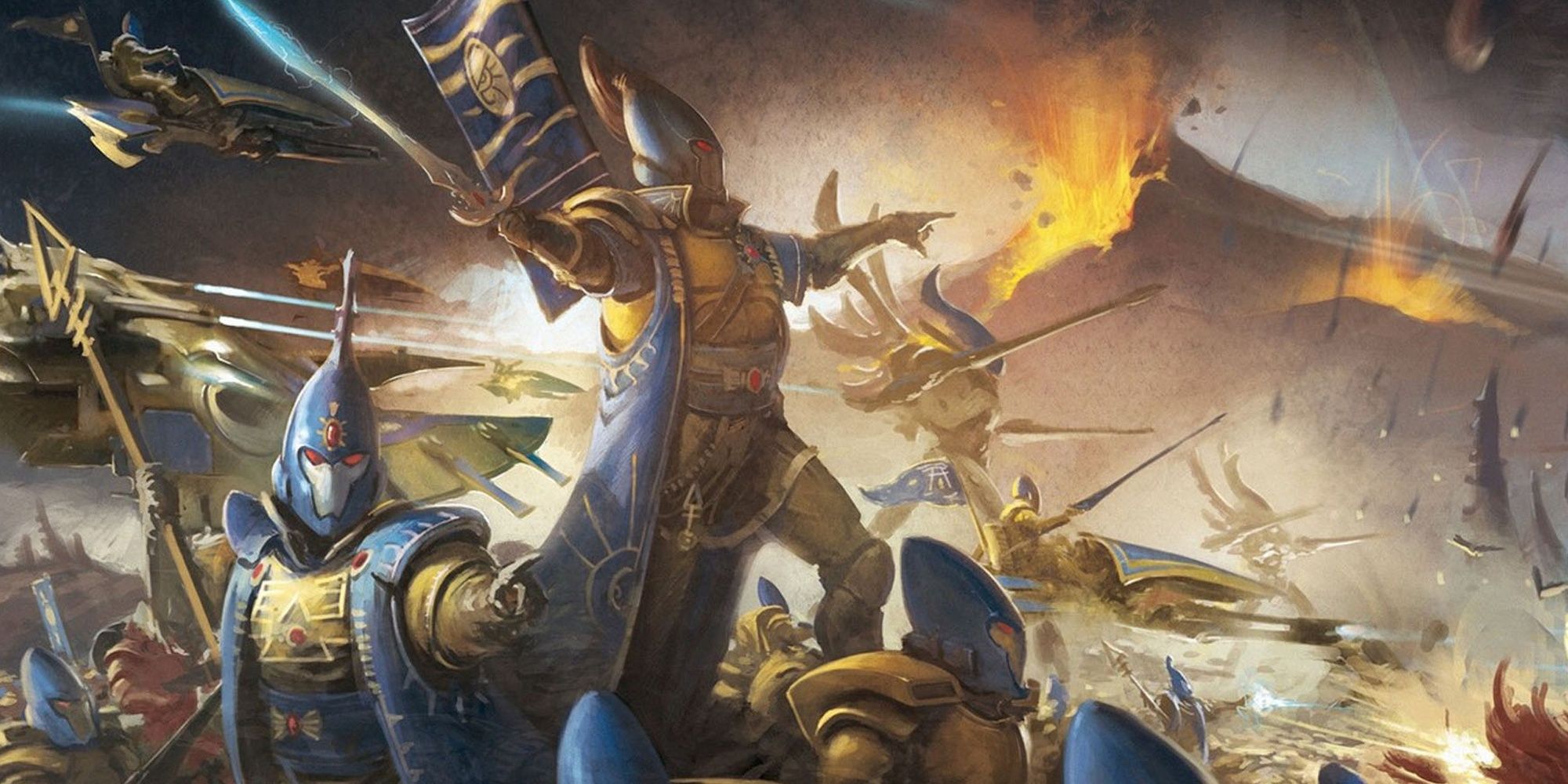 Biologically speaking, an individual Aeldari is the pinnacle of evolutionary perfection, and though such statements on an Imperial World would see you on the end of a Commissar's Bolt Pistol, Eldar are often considered by many races to resemble the perfect beings. It's easy to see why. This long-lived alien race mastered genetic manipulation eons ago, allowing them to have extended lifespans, heightened reflexes, pinnacle aesthetics, and the ability to think faster than other lifeforms.

They also possess a much stronger connection to the Warp, with most Eldar retaining minimal psychic abilities, with those that further train these gifts becoming powerful Psykers able to alter the battlefield with a hand wave. The Eldar also experience every sense extremely heightened, with every minor brush stroke on a canvas becoming a color-filled chasm and every symphony note a deafening roar. It's a trait that would eventually lead to their downfall as they drowned themselves in excesses that continue to taunt and tempt them to this day.

The technology used by the Aeldari is beyond advanced and can seem almost godlike to the layman. Their energy weapons can cleave starships in two, slicing through void shields like paper, whilst their ships can appear and disappear in real-space as quiet as a whisper and without warning. Their vehicles defy the laws of gravity and towering mechanical constructs manned by the souls of the dead stalk a battlefield bathed in psychic warp fire. It's a high-tech, meat grinder that few can stand against.

Add on top of that their manipulation of an intergalactic transport system known as the Webway, and these dimension-crossing marauders can appear anywhere at will before disappearing just as fast. Any encounter with the Eldar for the unprepared ends in one-sided slaughter as their advanced technology melts through the toughest tank armor whilst energy-edged swords wielded by assassins so fast they almost blur, easily cleave Space Marines in two. 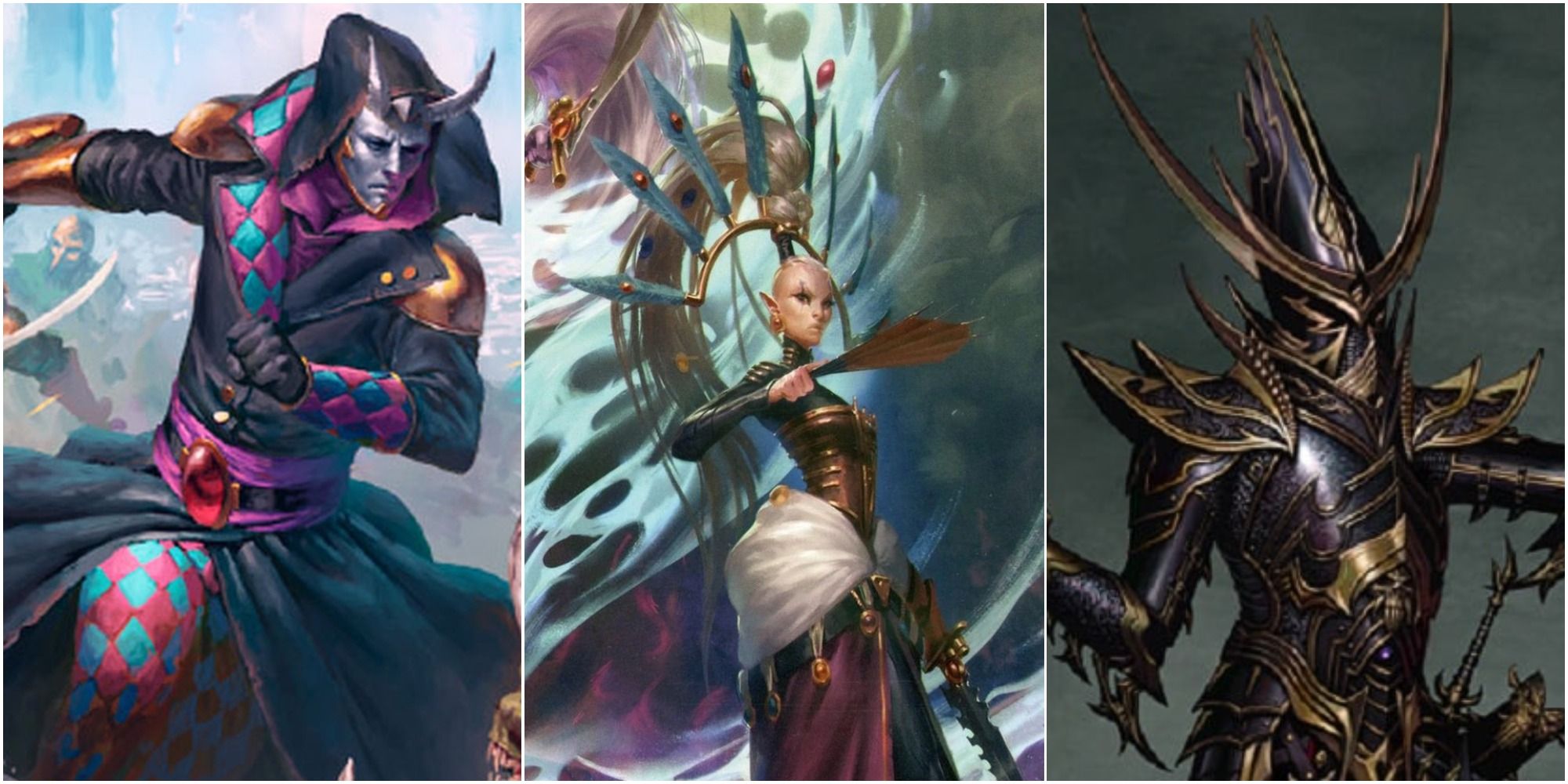 Despite once being a somewhat united empire, the Aledari are now fractured with each group adhering to their own strict social structures and organization. Though political manipulation and backstabbing is fairly commonplace, they mostly operate on their own, with only the Harlequins daring to bridge the void of hostilities between the Asuryani and the Druhkari.

It can be quite a lot to take in, as in typical Warhammer fashion, it's not that straightforward. But here's a rough overview of the subgroups of the Eldar and what they do:

The Eldar are truly a grab bag of nomads, and they all rigorously stick to their own interpretation of Aeldari traditions, some more warped than others. 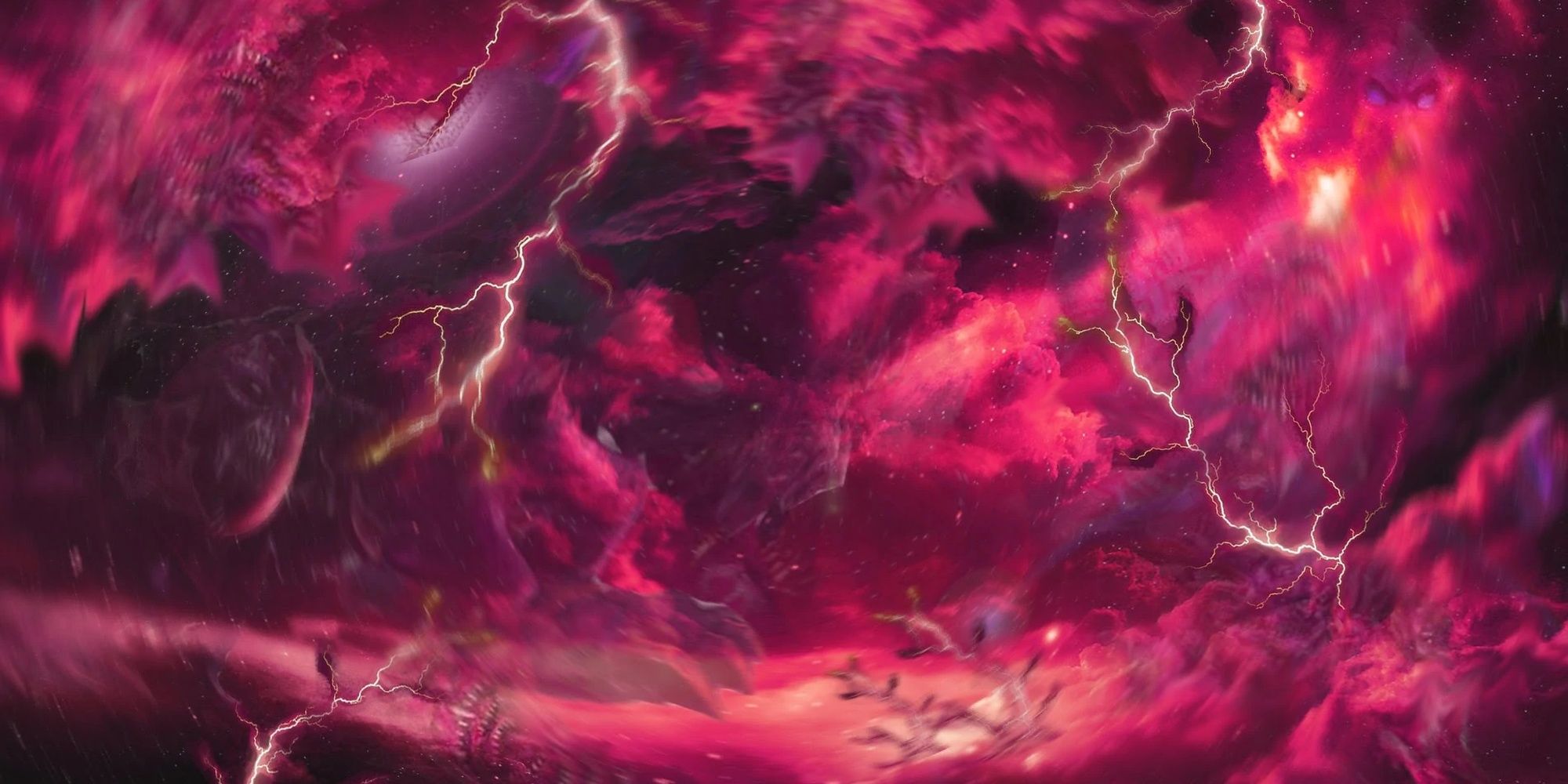 The Eldar have perhaps the strongest connection to the Warp. They're a very psycho-active race and long ago their species indulged in excess to such an extent that the collected psychic energy of that suffering helped create the Chaos God Slaanesh. The subsequent birth of this dark being unleashed a psychic scream heard across the immaterium and mortal realm alike as billions of Aledari souls were swept away and consumed by their creation. The survivors scattered to the solar winds, and a tear in reality now known as the Eye of Terror formed, destroying what was once the heart of the Eldar Empire.

The Aeldari's connection to the Warp is so strong that it makes for potent Psyker armies, but still they fear it and the God that waits inside. Because once an Eldar dies, unless their souls are placed within the sheltered confined of a Soul Stone, Maiden World, or the Infinity Circuit of a Craft World, their apparitions are sucked into the void and destroyed by Slaanesh to feed a never-ending hunger for Aledari souls. It's a brutal punishment of their own creation that must create a lot of despair amongst the Eldar. 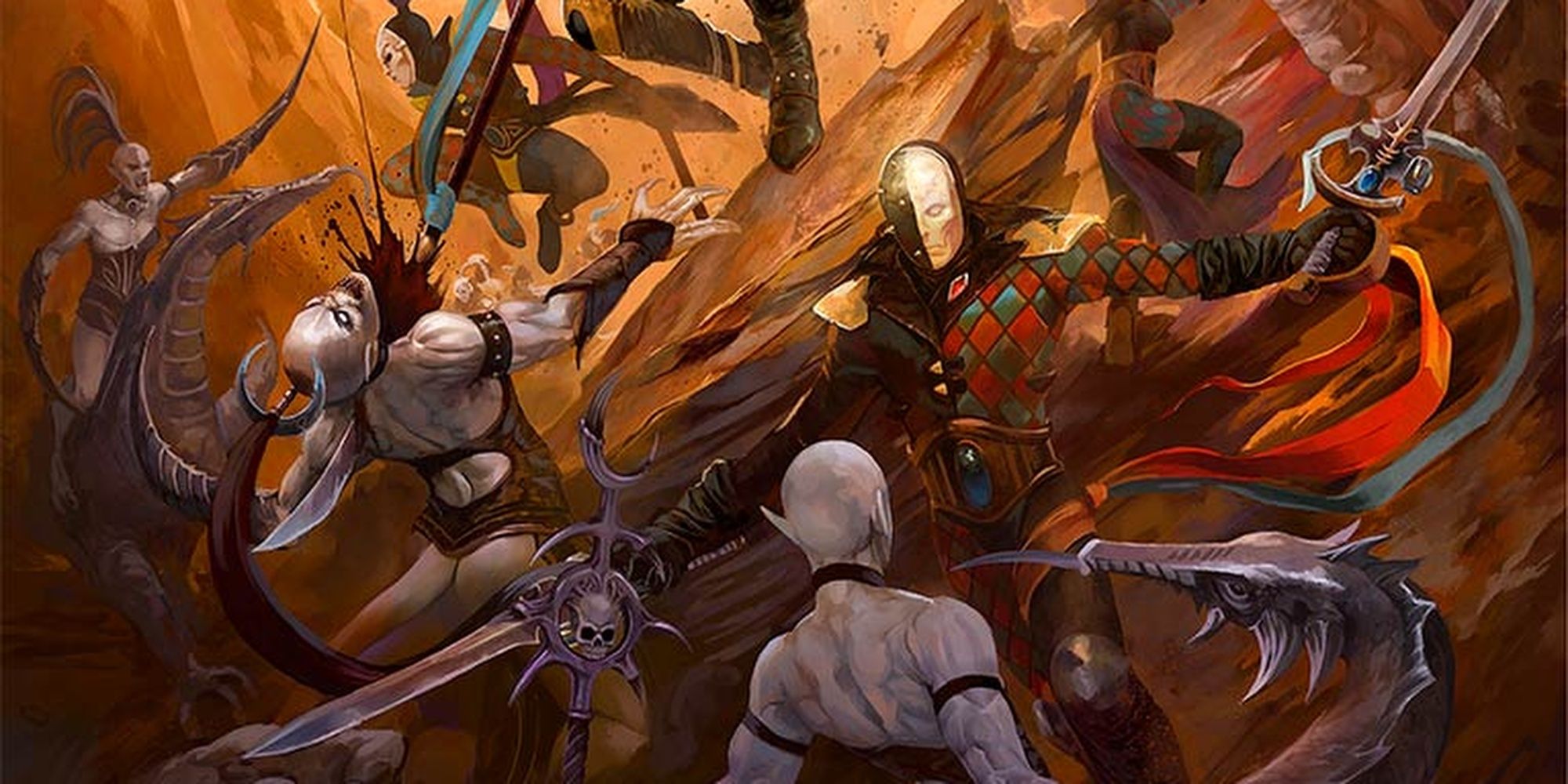 The Druhkari have a different name for Slaanesh the Chaos God of Pleasure and Excess, and it's worth mentioning because the lore behind it is pretty disturbing. These Dark Elves were lucky enough to avoid the one-way trip to Slaanesh's gullet curse that struck their kin by taking refuge in the Webway. This near-infinitely spanning pocket dimension served as their safe haven at first, but the side effects their new home caused damned them to an eternity of vampirism and horrific torture.

Slannesh hungers for their souls still, and so for every Drukhari, they will feel their lifeforce continually ebbing away into the Warp. With only the psychic torment of others nourishing them, restoring them to pristine condition, whilst those that go "unfed" devolve into desperate starving creatures, twisted feral Empathic Vampires feeding on any morsel of pain and misery they can drag out from their prey. It's a sad existence, but one the Drukhari seem to revel in.