Did you miss a session at the Data Summit? Watch On-Demand Here.

It’s no secret that employee turnover is a big problem today — just 29% of IT workers reportedly plan to remain with their current employer, compounding existing hiring headaches that businesses already face.

This is an issue that WorkHound is looking to solve, with a platform that gathers employee feedback and establishes sentiment from across the frontline workforce. Today, the company announced that it has raised $12 million in a series A round of funding.

WorkHound focuses squarely on supply chain sectors, including logistics, warehousing, and trucking — through the platform, workers are encouraged to submit anonymous feedback and ideas directly from their smartphones.

WorkHound then parses the data to deliver actionable insights to management, HR, or anyone in a company that needs to keep their finger on the employee sentiment pulse. This could be something as simple as providing a broad overview of the key topics that truck drivers are talking about, to see what’s most important to them. 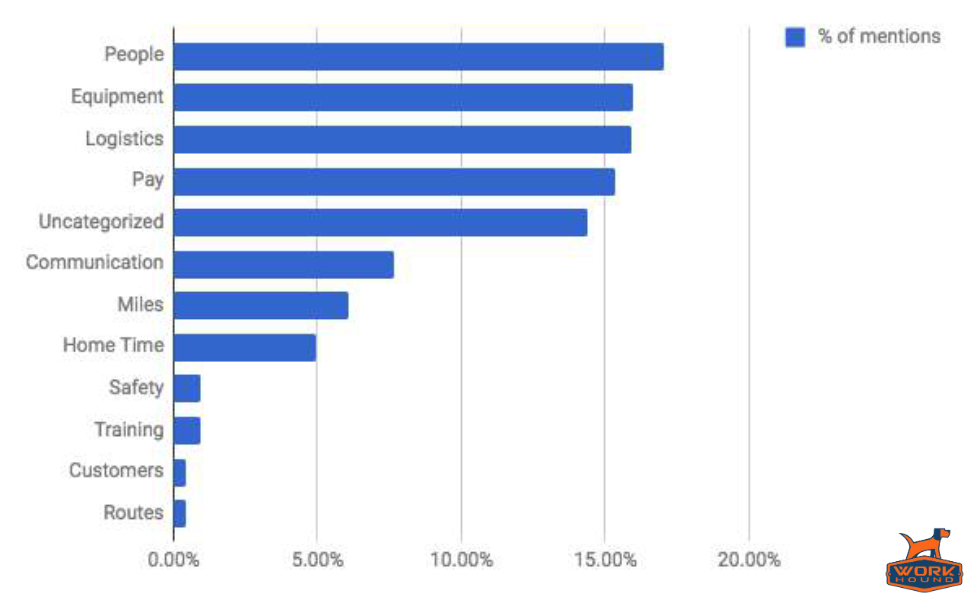 Founded in 2015, WorkHound had previously raised around $2 million, and with another $12 million in the bank, the company is well-financed to capitalize on growing concerns around the so-called “great resignation.” Some 4.3 million U.S. workers quit their jobs in January alone, with the rate seemingly higher in sectors with many frontline workers.

However, long before the “Great Resignation” became a common term, the trucking industry in particular has experienced a high driver turnover rate, a figure that currently sits at around 92%.

In truth, WorkHound exists at the intersection of two trends — one being the growing focus on tools to better support the deskless workforce, leading companies such as Connecteam, Skedulo and WorkJam, to raise  sizable sums over the past year. The other trend, meanwhile, is centered around forging better relationships with all workers to ensure that any simmering problems are identified and addressed swiftly. This is evidenced by the fact that LinkedIn acquired Glint back in 2018 for $400 million, while Workday snapped up Peakon for a cool $700 million.

WorkHound’s series A round was funded in its entirety by growth equity firm Level Equity.

VentureBeat’s mission is to be a digital town square for technical decision-makers to gain knowledge about transformative enterprise technology and transact. Learn More