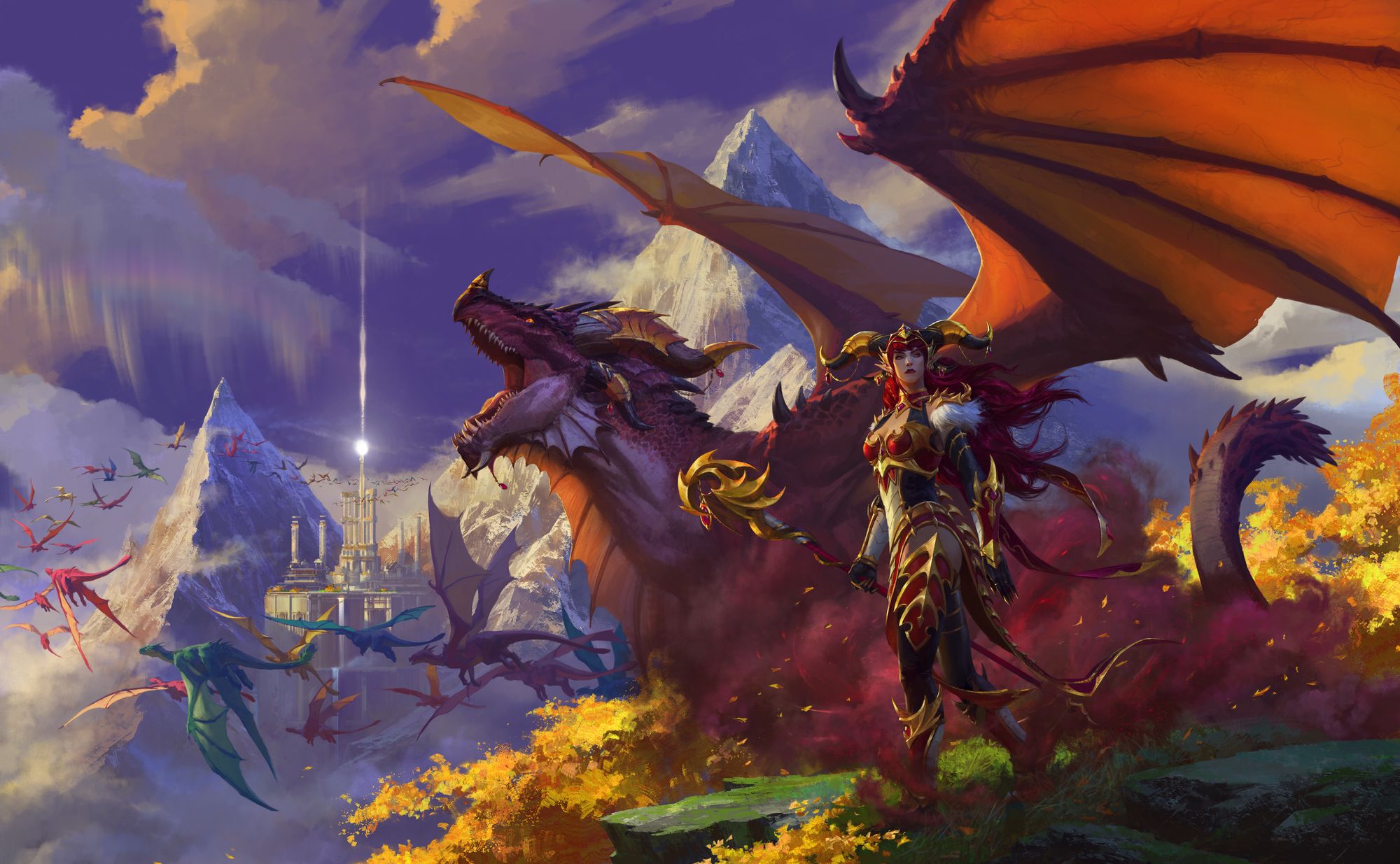 The new World Of Warcraft expansion has been unveiled and it brings not just dragons but the chance for cross-faction cooperation.

After several expansions centred around cataclysmic, world-changing events, that have torn Azeroth apart, World Of Warcraft’s latest expansion, Dragonflight, has a different vision for the venerable MMO. Set in a high-fantasy land filled with dragons, centaurs, tuskars, and ‘crazy magic’, this expansion aims to return to the roots of Azeroth and the classic components associated with World Of Warcraft’s legacy.

Instead of throwing players straight into another apocalyptic battle, Dragonflight’s focus will instead be on deep exploration and adventure. The expansion hopes to emulate the ‘classic experience’ of World Of Warcraft, while adding dragons and new, modernised features.

Dragons have long existed in the World Of Warcraft franchise but Dragonflight is the first expansion to place these colossal creatures at its centre, as players journey into the secretive Dragon Isles. These mystical isles have been hidden away for 10,000 years and offer players a ‘renewed vision’ of how the creatures exist within the world of Azeroth.

Players will have an opportunity to create their own dragon character, thanks to the new Dracthyr race. And if you are unsure about being stuck within the body of a winged, scaley reptile, you will be pleased to know that your draconic body has a humanoid form too, also with ample amounts of customisation.

Senior game designer Jackie Wiley considers Warcraft dragons to be ‘unique’ and the pinnacle of high fantasy. ‘World Of Warcraft dragons are such a special take,’ she told me. ‘As fantasy nerds, they are one of those cultures that everyone is excited to work on. I mean, who doesn’t want to make dragon stuff?’

Associate art director Tina Wang also offered her insight: ‘Players will be able to encounter dragons that you have not seen before. With the new skill of dragon writing, you will be able to collect four different types of dragons. And the first ever fully customisable mounts. Our brand new Wilderdrake comes with tons of customisable options.’

While paying homage to the original qualities of World Of Warcraft in terms of its lore, discovery, world, and character building, Blizzard will also be implementing some ambitious, if not radical, changes to the game. Players should expect to see a much more user friendly, modernised user interface and talent overhaul, and the opportunity for cross-faction play.

Many players will remember the joy and wonder of logging into World Of Warcraft for the first time and seeing the world before you slowly unfold, ready to be explored. As Jackie says: ‘There is nothing quite like a true Azerothian adventure!’

Fans of the game will have fond memories of venturing into beautiful zones filled with secrets and rich lore to uncover. Tina sees Dragonflight as fitting within this mould: ‘In terms of the story, we want to go back to the foundations of what makes it World Of Warcraft.’

The Dragon Isles will be located somewhere between Northrend and the Eastern Kingdoms, where they have remained undiscoverable after an ancient war known as The Sundering. So why has it taken until now for the Dragon Isles to be revealed, if they are so close to familiar continents within Azeroth?

Jackie had some thoughts on this: ‘The Dragon Isle has been cloaked within a thick fog. When The Sundering happened all of the magic drained from the isle. But now, as Azeroth is healing, all of the magic is coming back. When our lovely friend Koranos from the trailer – aka stone man – fixed the Titan relic and unleashed that beam of light, it revealed the Dragon Isles again.’

The idea that Azeroth has all of these secret lands, that go beyond what was previously know, has always been its greatest selling point to me as a player. The world feels limitless, which is a key quality for fantasy games.

The mystical Dragon Isles are filled with jagged cliffs, golden-red tundra, and frozen waterfalls. The new zones are described as, ‘rich, secretive, and vibrant’. The incredible cinematics and artwork alone speak for themselves.

Dragonflight will focus on exploration, as players peel back the layers of the story – old stomping grounds that some will be familiar with. Starting in the Waking Shores, players will immediately be thrown into the action as they arrive on ships, with opportunities to fight opposing players as they sail through the Dragon Isles.

The central conflicts and main foes in Dragonflight have yet to be officially revealed but there is certainly a hint at a looming threat, due to the different types of dragons that exist across the zones. Could an internal struggle between the dragons be imminent?

Jackie had this to say: ‘There’s more to dragonkind than what we’ve seen. The original dragons were raised by the Titans and are elevated and intelligent. But this did not happen to all dragons. Some dragons have their own languages and cultures. They have their own threats that they might pose as non-Titan dragons. As we dive into the Dragonflights, we’ll also look at what came before them and where the future will go with the dragons.’

Over the last 17 years, the Horde and the Alliance, World Of Warcraft’s two factions that players can chose to join, have been at war with one another. But for the first time in World Of Warcraft’s history, players will be able to collaborate with those on the opposing faction to complete dungeons and raids.

How will this work in terms of the game’s lore, where pacts between the Horde and Alliance have always been tenuous? Jackie is optimistic about the cross-faction features: ‘I think that the lore suits cross-faction play. We have expansions where the Horde and the Alliance are actively at war together but are prepared to put aside their differences for the greater good.’

It is true that we have seen the Horde and the Alliance uniting together at certain points during World Of Warcraft’s history, so perhaps cross-faction play is not as peculiar as it seems. It happened before when the opposing sides stood together against the Burning Legion, and the Horde and the Alliance also explored zones side-by-side in expansions such as Mists Of Pandaria.

Although cross-faction play will be integrated into World Of Warcraft, Jackie is adamant that this will be a opt-in, limited feature which is dependent on community feedback. ‘Cross-faction is not something that we would do lightly. We’ve had 18 years of the factions being separate. But at the end of the day, it is an MMO and we want players to be able to play with their friends.’

On a Twitter poll posted by the developers, which asked for player’s votes on cross-faction play, 70% of players voted in support of the feature. Night elves joining groups of undead teammates may seem strange, and be breaking the tradition of not being able to complete objectives with the other factions, but it’s hoped it will work to help evolve the game.

In terms of Dragonflight, Tina explained that, ‘the Horde and the Alliance will be coming together to explore this land that has been hidden for so long. There are going to be different factions who are working together to uncover the mysterious of the Dragon Isles. But these adventurers are not the conquerors. These are scientists and explorers and settlers known as the Dragonscale Expedition. There will be rivalries between the two factions, but they will also be collaborating.’

The Horde and Alliance are prepared to put their differences aside in order to explore the Dragon Isles. And this is how the new cross-faction system will be threaded into the fabric of the game.

Dragonflight carries a message of hope. The hope to heal the world and restore some order within the fractured world of Azeroth. The trailer for Dragonflight is light and hopeful, especially when compared to the icy showdown in Icecrown Citadel, between Sylvanas and Bane, in Shadowlands.

With everything that has happened over the last two years, a hopeful message feels very welcome. Jackie agrees: ‘As storytellers we always put a bit of ourselves into what we create. Including the things that we look forward to. As a team, we all have a shared vision for the future of World Of Warcraft, so it’s nice to put hope into an expansion.’

Dragonflight, the ninth expansion for World Of Warcraft, seeks to usher in a new era of high fantasy adventure, and to fuse together the old and the new. Jackie is excited for players to be able to experience the vastness of a dragon homeland: ‘Expansions like Wrath have given players hints of what dragon architecture looks like. You have Wyrmwrest Temple and Dragonblight. Returning to the Dragon Isles allows players to truly see what a dragon city looks like and where dragons live.’

With such a strong concept underpinning the expansion, I am excited to learn more about Dragonflight and how the story will unfold.