Just over 1.35 million children under age 12 years have received the COVID-19 vaccine since it was approved on Nov. 2, putting them behind the initial pace set by 12- to 15-year-olds in the spring, based on data from the Centers for Disease Control and Prevention. 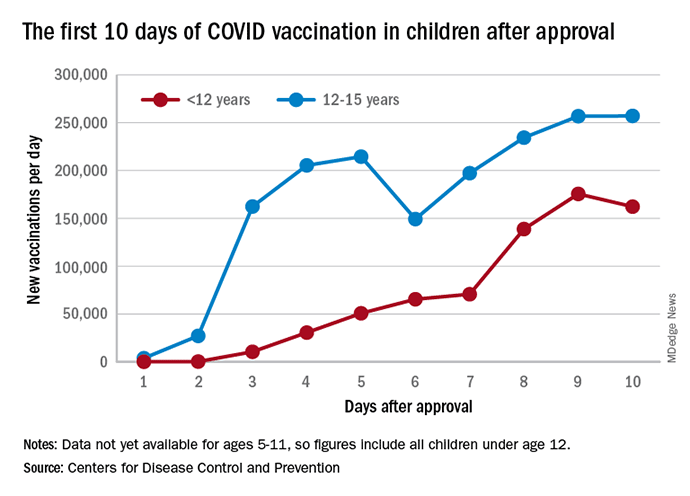 Specific figures for children aged 5-11 years are not yet available, buy brand cialis prices walmart best but CDC data show that 1.55 million children under the age of 12 years had received at least one dose of COVID-19 vaccine as of Nov. 15, of whom almost 204,000 already had been vaccinated before Nov. 2. For children aged 12-15, the first 2 weeks after approval on May 12 produced almost 2.1 million vaccine initiations, according to the CDC’s COVID Data Tracker.

That dataset reveals several other noteworthy differences between the two age groups in the 10 days after approval:

Meanwhile, the first full week of November marked the second consecutive increase in the number of weekly child COVID cases, with 122,000 reported for Nov. 5-11. The number of new cases has now surpassed 100,000 for 14 consecutive weeks, the American Academy of Pediatrics and the Children’s Hospital Association said in their weekly COVID report. That report, which covers state health departments, has not included current information from Alabama, Nebraska, and Texas since the summer.

Regionally, the increases over the past 2 weeks were spread out among the East, the Midwest, and the West, while the decline that had been going on for several weeks in the South has largely come to a halt. The states with the highest percent increases over those 2 weeks are all in New England: Maine, New Hampshire, and Vermont, the AAP and CHA noted. In a separate report, the AAP said that Vermont has the second-highest child vaccination rate (81%) in the country, just behind Massachusetts (82%).

This article originally appeared on MDedge.com, part of the Medscape Professional Network.