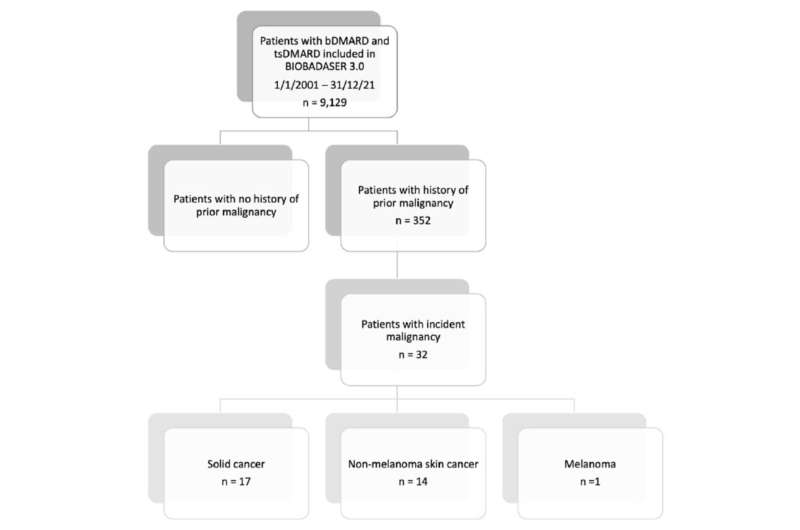 New research presented this week at ACR Convergence 2022, the American College of Rheumatology’s annual meeting, found no significant difference in cancer risk in patients with rheumatic disease and a history of malignancy taking biologic or targeted synthetic DMARDs compared to those treated with TNF inhibitors.

Patients with a history of cancer are routinely excluded from randomized controlled trials, so data on cancer risk is limited. This is particularly problematic in older adults with rheumatic diseases who are increasingly treated with biologic and targeted synthetic disease-modifying anti-rheumatic drugs (DMARDs), despite a higher prevalence of comorbidities, including cancer. The researchers undertook this prospective observational study to investigate the occurrence and relative risk of incident cancer in patients with a history of malignancy treated with these medications.

The 352 patients in the study were drawn from BIOBADASER 3.0, a multicenter prospective registry for patients in Spain treated with biologic and targeted synthetic DMARDs. The new version of BIOBADASER was launched specifically to address the growing use of these drugs and changes in adverse events reporting.

The cohort were mostly women with rheumatoid arthritis (RA) and were included in the registry up to 2021. The majority of patients used TNF inhibitors and interleukin (IL)-17 inhibitors were used the least. Other medications included Janus kinase (JAK) inhibitors, IL-6 inhibitors, lamictal headaches bipolar anti-CD20 antibodies and anti-CTLA-4 antibodies.

Overall incidence did not differ significantly compared to TNF inhibitors, no matter whether patients were treated with JAK inhibitors, anti-CD20 antibodies, IL-6 or IL-17 inhibitors or anti-CTLA-4 antibodies. The rate of different types of cancer (one melanoma, 14 non-melanoma skin cancers and 17 solid tumors) also did not differ between the various treatment groups versus TNF inhibitor therapy.

“We should say that we have not found an increased risk of cancer in this population, although we cannot exclude with our data a potential risk,” Dr. Molina-Collada says.

He also notes that long observational periods are needed to evaluate the risk of diseases such as cancer. In the study cohort, mean follow-up ranged from 11.5 to 23 months. Dr. Molina-Collada adds, “Medical national registries such as BIOBADSER have intrinsic limitations as to the quality of collected data, although external audits of the participating centers are routinely performed.”

Yet he points out that because this large study did not find an increase in the overall occurrence of cancer in patients with rheumatic diseases and prior cancer, the “results are reassuring on the pattern of use of these therapies.” He notes that “this is the first study, to our knowledge, to provide safety data on the use of targeted synthetic DMARDs or anti-IL-17 inhibitors in patients with a history of cancer.”