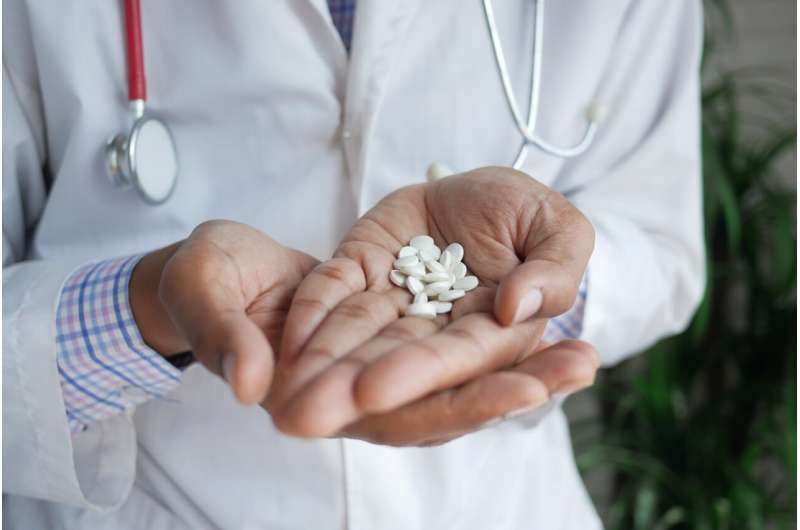 Patients who have surgery to repair bone fractures typically receive a type of injectable blood thinner, low-molecular-weight heparin, to prevent life-threatening blood clots, but a new clinical trial found that over-the-counter aspirin is just as effective. The findings, presented today at the Orthopedic Trauma Association (OTA) annual meeting in Tampa, clindamycin antibiotic for sore throat FL, could cause surgeons to change their practice and administer aspirin instead to these patients.

The multi-center randomized clinical trial of more than 12,000 patients at 21 trauma centers in the U.S. and Canada, is the largest-ever trial in orthopedic trauma patients. The trial was co-led by the Department of Orthopedics at the University of Maryland School of Medicine (UMSOM) and the Major Extremity Trauma Research Consortium (METRC) based at the Johns Hopkins Bloomberg School of Public Health.

“We expect our findings from this large-scale trial to have an important impact on clinical practice, and potentially even change the standard of care,” said the study’s principal investigator Robert V. O’Toole, MD, the Hansjörg Wyss Medical Foundation Endowed Professor in Orthopedic Trauma at UMSOM and head of the school’s Division of Orthopedic Traumatology. “Orthopedic trauma patients are commonly prescribed the blood thinner low-molecular-weight heparin to prevent blood clots for weeks following surgery. Not only does the medication need to be injected, it can also be quite expensive compared to aspirin.”

Blood clots cause as many as 100,000 deaths in the U.S. each year, according to the U.S. Centers for Disease Control (CDC). Patients who experience fractures that require surgery—an estimated 1 million people in the U.S. annually—are at increased risk of developing blood clots in the veins, including a fatal pulmonary embolism, which is a clot in the lung. Current guidelines recommend prescribing low-molecular-weight heparin (enoxaparin), although research in total joint replacement surgery suggested a potential benefit of aspirin as a less-expensive, widely available option.

Dr. O’Toole, who is also chief of orthopedics at the R Adams Cowley Shock Trauma Center at the University of Maryland Medical Center (UMMC), presented the results of the landmark clinical trial at the OTA annual meeting.

The study enrolled 12,211 patients with leg or arm fractures that necessitated surgery or pelvic fractures regardless of the specific treatment. Half were randomly assigned to receive 30 mg of injectable low-molecular-weight heparin twice daily. The other half received 81 mg of aspirin twice daily. The follow-up period after surgery was 90 days.

The main finding of the study was that aspirin was “noninferior,” or no worse, than low-molecular-weight heparin in preventing death from any cause—47 patients in the aspirin group died compared with 45 patients in the heparin group. Secondary outcomes noted no differences in non-fatal pulmonary embolism. The incidence of bleeding complications and all other safety outcomes was similar in both groups. Of all the outcomes studied, the one potential difference noted was fewer blood clots in the legs in the low-molecular-weight heparin group. This relatively small difference was driven by clots lower in the leg, which are of unclear clinical importance.

“With data from more than 12,000 patients, this study provides clear evidence that aspirin is a viable option for preventing blood clots in the lung and death in patients who require surgery for orthopedic trauma,” said Andrew Pollak, MD, the James Lawrence Kernan Professor and Chair of the Department of Orthopedics at UMSOM and Senior Vice President and Chief Clinical Officer for the 11-hospital University of Maryland Medical System (UMMS).

The trial was called PREVENTion of CLots in Orthopedic Trauma, or PREVENT CLOT. Patients enrolled in the trial were treated at the R Adams Cowley Shock Trauma Center at UMMC and 20 other trauma centers in 15 other states and two in Canada. Recruitment started in April 2017 and continued through 2021. Deborah Stein, MD, MPH, Professor of Surgery at UMSOM and Director of Adult Critical Care Services at UMMC, and Renan Castillo, Ph.D., an Associate Professor of Health Policy and Management at the Johns Hopkins Bloomberg School of Public Health, are co-principal investigators.