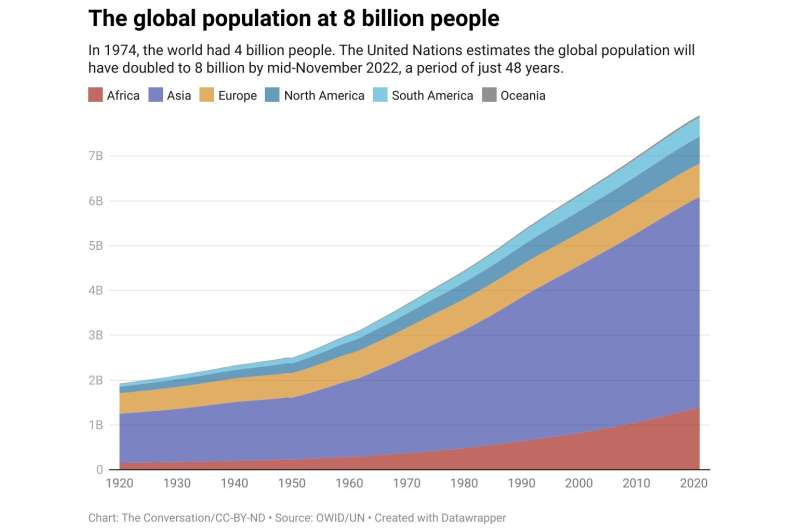 There are questions that worry me profoundly as a population- and environmental-health scientist.

Will we have enough food for a growing global population? How will we take care of more people in the next pandemic? What will heat do to millions with hypertension? Will countries wage water wars because of increasing droughts?

These risks all have three things in common: health, climate change and a growing population that the United Nations forecasts will reach 8 billion people around Nov. 15, 2022—double the population of just 48 years ago.

In my 40-year career, first working in the Amazon rainforest and the Centers for Disease Control and Prevention, and then in academia, I have encountered many public health threats, zovirax krema za oci but none so intransigent and pervasive as climate change.

Of the multitude of climate-related adverse health effects, the following four represent the greatest public health concerns for a growing population.

Researchers have found that over half of all human infectious diseases can be worsened by climate change.

Flooding, for example, can affect water quality and the habitats where dangerous bacteria and vectors like mosquitoes can breed and transmit infectious diseases to people.

Dengue, a painful mosquito-borne viral disease that sickens about 100 million people a year, becomes more common in warm, wet environments. Its R0, or basic reproduction number—a gauge of how quickly it spreads—increased by about 12% from the 1950s to the average in 2012-2021, according to the 2022 Lancet Countdown report. Malaria’s season expanded by 31% in highland areas of Latin America and nearly 14% in Africa’s highlands as temperatures rose over the same period.

Flooding can also spread waterborne organisms that cause hepatitis and diarrheal diseases, such as cholera, particularly when large numbers of people are displaced by disasters and living in areas with poor water quality for drinking or washing.

Droughts, too, can degrade drinking water quality. As a result, more rodent populations enter into human communities in search of food, increasing the potential to spread hantavirus.

Excessive heat can exacerbate existing health problems, such as cardiovascular and respiratory diseases. And when heat stress becomes heat stroke, it can damage the heart, brain and kidneys and become lethal.

Today, about 30% of the global population is exposed to potentially deadly heat stress each year. The Intergovernmental Panel on Climate Change estimates that percentage will rise to at least 48% and as high as 76% by the end of this century.

In addition to lives lost, heat exposure was projected to have resulted in 470 billion potential work hours lost globally in 2021, with associated income losses totaling up to US$669 billion. As populations grow and heat rises, more people will be relying on air conditioning powered by fossil fuels, which further contributes to climate change.

The Lancet review found that high temperatures in 2021 shortened the growing season by about 9.3 days on average for corn, or maize, and six days for wheat compared with the 1981-2020 average. Warming oceans, meanwhile, can kill shellfish and shift fisheries that coastal communities rely on. Heat waves in 2020 alone resulted in 98 million more people facing food insecurity compared with the 1981-2010 average.

Rising temperatures also affect fresh water supplies through evaporation and by shrinking mountain glaciers and snowpack that historically have kept water flowing through the summer months.

Water scarcity and drought have the potential to displace almost 700 million people by 2030, according to U.N. estimates. Combined with population growth and growing energy needs, they can also fuel geopolitical conflicts as countries face food shortages and compete for water.

Air pollution can be exacerbated by the drivers of climate change. Hot weather and the same fossil fuel gases warming the planet contribute to ground-level ozone, a key component of smog. That can exacerbate allergies, asthma and other respiratory problems, as well as cardiovascular disease.

Wildfires fueled by hot, dry landscapes add to the air pollution health risk. Wildfire smoke is laden with tiny particles that can travel deep into the lungs, causing heart and respiratory problems.

What can we do about it?

Many groups and medical experts are working to counter this cascade of negative climate consequences on human health.

The U.S. National Academy of Medicine has embarked on an ambitious grand challenge in climate change, human health, and equity to ramp up research. At many academic institutions, including the University of Pittsburgh’s Department of Public Health, where I am dean, climate and health are being embedded in research, teaching and service.

Addressing the health burden on low- and middle-income countries is pivotal. Often, the most vulnerable people in these countries face the greatest harms from climate change without having the resources to protect their health and environment. Population growth can deepen these iniquities.

Adaptation assessments can help high-risk countries prepare for the effects of climate change. Development groups are also leading projects to expand the cultivation of crops that can thrive in dry conditions. The Pan American Health Organization, which focuses on the Caribbean, is an example of how countries are working to reduce communicable diseases and advance regional capacity to counter the impact of climate change.

Countries worldwide committed in 1992 to reduce greenhouse gas emissions. Thirty years later, global emissions are only beginning to flatten, and communities around the world are increasingly suffering extreme heat waves and devastating floods and droughts.

The U.N. Climate Change Conference underway in November 2022—which, in my view, isn’t focusing enough on health—can help bring attention to key climate impacts that harm health. As U.N. Secretary-General António Guterres noted: While we celebrate our advances, “at the same time, it is a reminder of our shared responsibility to care for our planet and a moment to reflect on where we still fall short of our commitments to one another.”

Provided by
The Conversation

This article is republished from The Conversation under a Creative Commons license. Read the original article.