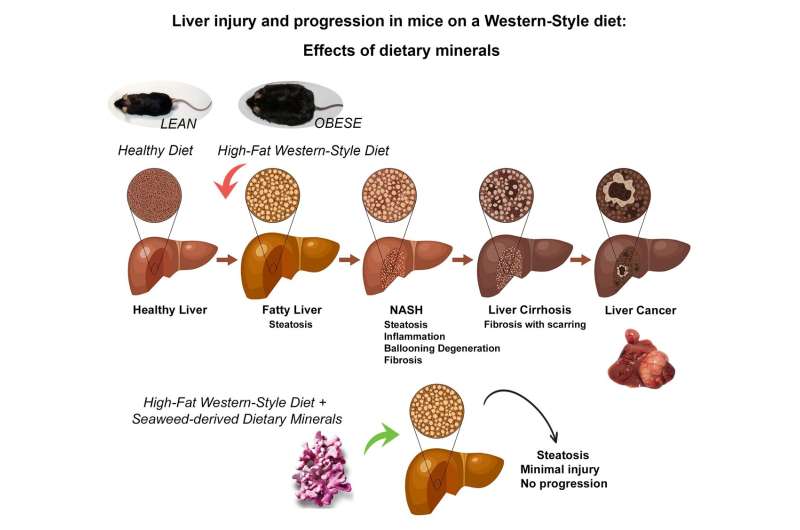 Results from a preclinical study add new evidence that a multi-mineral dietary supplement known as Aquamin could be a simple and effective way to reduce the long-term health consequences of non-alcoholic fatty liver disease. Aquamin, which is derived from calcified red marine algae, is rich in calcium, magnesium and 72 other minerals and trace elements.

About 25% of people in the U.S are affected by non-alcoholic fatty liver disease, which is characterized by an excess of fat stored in the liver. Some people with this disease develop a more aggressive form known as non-alcoholic steatohepatitis (NASH) in which the liver is inflamed. This can progress to fibrosis, advanced scarring known as cirrhosis, liver failure and cancer.

“Non-alcoholic fatty liver disease is a growing public health challenge that is currently being addressed through an emphasis on lifestyle changes, especially diet, to prevent fat build-up in the liver,” said research team leader Muhammad Nadeem Aslam, MD, from the University of Michigan in Ann Arbor. “New approaches are needed because this doesn’t work for everyone.”

Isabelle Harber, an undergraduate researcher in Aslam’s lab, will present the new research at the American Society for Investigative Pathology annual meeting during the Experimental Biology (EB) 2022 meeting, to be held April 2–5 in Philadelphia.

“Most people living in Western society do not meet the USDA daily intake guidelines for the intake of calcium and magnesium and, presumably, other minerals nutritionally associated with these minerals,” said Harber. “We are working to find out if a mineral supplement could provide a low-cost, low- to no-toxicity approach to mitigating the devastated consequences of non-alcoholic fatty liver disease.”

In preliminary studies, the researchers fed mice a high-fat diet to induce the development of non-alcoholic fatty liver disease and NASH. They studied these mice for 15 to 18 months to observe the full spectrum of liver disease, including advanced fibrotic changes and liver cancer.

These studies revealed a dramatic reduction in late-stage consequences of NASH in the animals that were fed the high-fat diet and received the multi-mineral supplement, compared to those that didn’t receive the supplement. In short-term studies lasting about 24 weeks, the researchers identified protein changes associated with the NASH and reduced tumor formation in the longer studies.

“In the long-term studies, we observed that most of the mice on the high-fat diet had large liver tumors while the mice on the same diet had no tumors when they received the mineral supplement,” said Aslam. “These results confirmed our earlier findings that minerals may have the potential to reduce the downstream consequences of fatty liver disease.”

Because the short- and long-term studies were performed using different types of mice, the researchers next plan to perform both sets of studies in the same animals. This will allow them to identify early protein changes in individual animals that may predict later consequences or be associated with protection from such consequences.